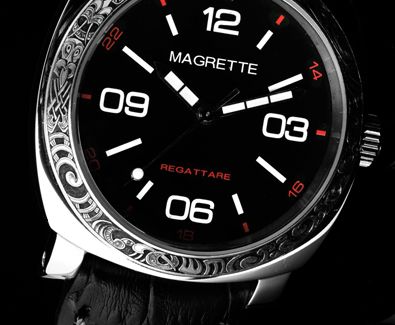 Apparently New Zealand is the latest country I’ve learned about that has watch makers. This is a very cool thing from the land next to the land down under. The last surprise came from Iceland; and before that was probably a few years ago when I learned about the Bozeman Watch Company straight outta small town Bozeman, Montana. Magrette is based in New Zealand’s largest city Auckland, which is really a wonderful place that I’ve had the pleasure of once visiting. If you are wondering what special character a New Zealand watch company can imbue into watch, think no further than a history of nautical adventure, and the right art and culture coming from the Maori people.

This watch is dedicated to the story of Kupe’s Voyage, a Maori tale about Polynesian adventure and folklore. The story describes how Islanders first came to the New Zealand land mass to settle, complete with the trial and tribulations. It is  almost like a Maori version of Columbus, but without all the controversy and killing of the natives. These were the real ocean adventurers who traveled for thousands of miles not in galleons, but canoes.

This particular watch is the very limited edition of 10 pieces Magrette Kupe’s Voyage based on their Regattare model line. The reason it is limited is because each beautifully decorated bezel is hand engraved by New Zealand artist Andrew Biggs. The same artist also creates other limited editions for the brand that offer similar (but different) engraved bezels on the Magrette watch line, such as the Ta Manaia. The best part of all this is the price. How often can you get a limited edition mechanical watch with hand engraving for just $1,585? You’ll also notice that the Magrette Regattare has a striking resemblance to Anonimo watches. Probably not a coincidence, but not a bad thing either as the Magrette watches cost at least half of the Italian Anonimo watches.

The watch case is 44mm wide, housing an ETA 2824-2 automatic movement, with a sapphire crystal on the dial. The watch also comes in a beautiful handmade wooden box that really sweetens the deal. All in all I think this watch is a great value, and I highly recommend checking out New Zealand’s own, Magrette watches.