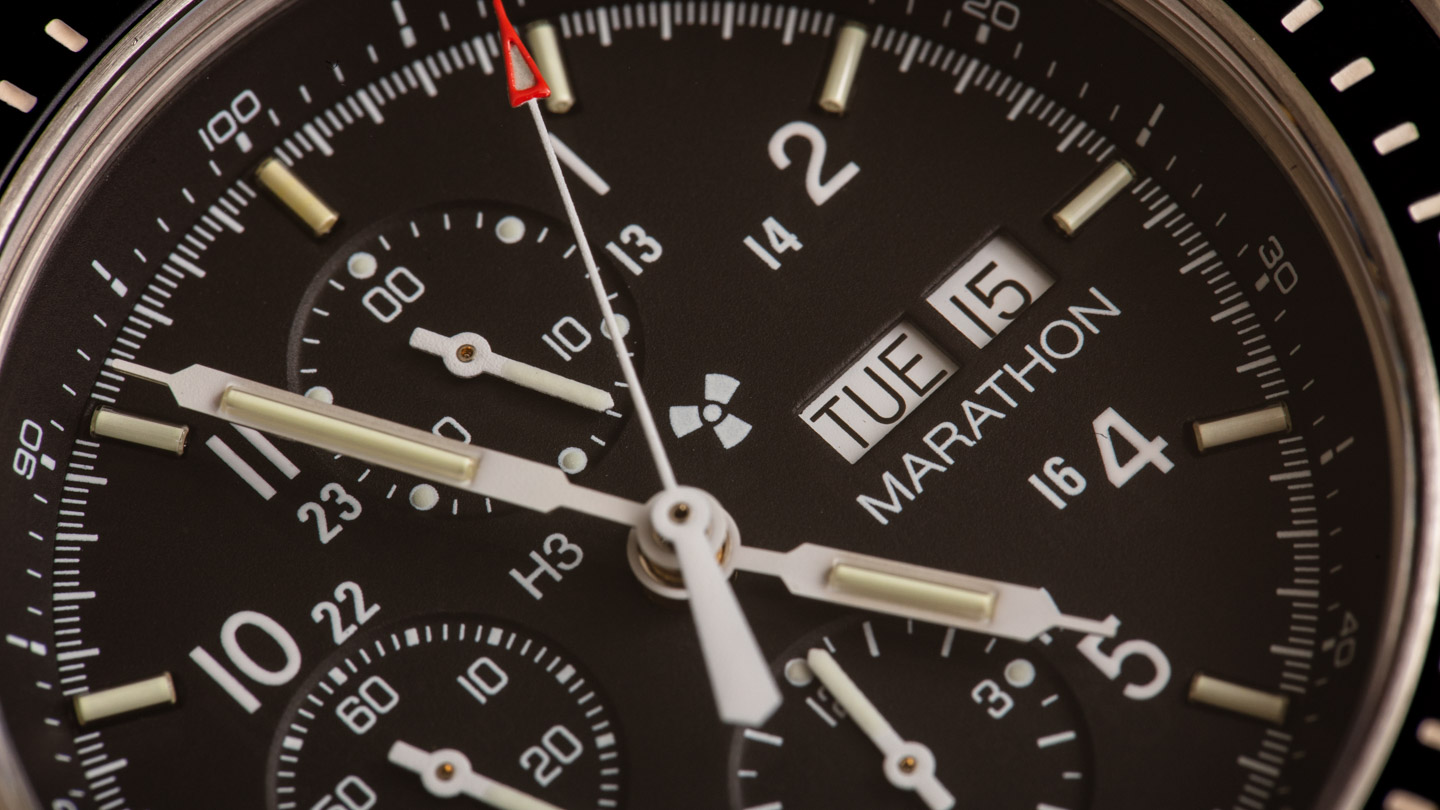 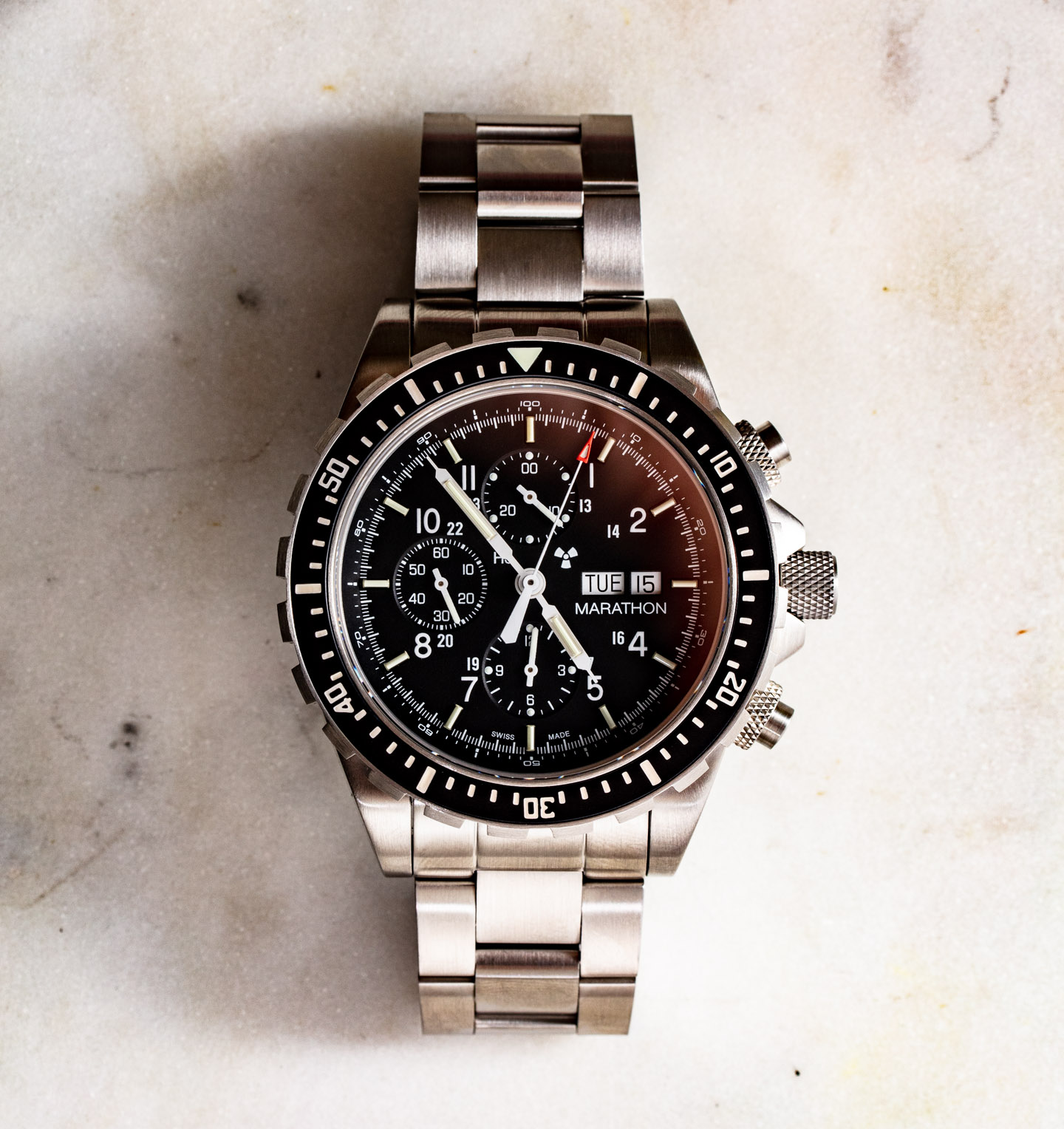 I’ve waited a few years into my relationship as a fan of the brand to review the current king of Marathon watches — and I have to say,  it was worth the wait. The Marathon CSAR is a rather fantastic tool watch, and it wears its crown by being not only the largest current Marathon wristwatch available but also the most expensive. “CSAR” stands for “Chronograph Search & Rescue,” making it the bigger, chronograph-equipped brother to the more popular three-hand Marathon GSAR (aBlogtoWatch review here). You do need to be in the “tool watch” mood to really get into this watch, but for a lot of collectors, having a CSAR in your collection is a sensible thing to do.

What is it? Marathon is a Canada-based historic watchmaker and also military supplier. Today it remains probably the last actual “Government Issue” watch in the Western World. This watch is thus built to actual Government specifications (for US, Canada, UK, and more), and has official NATO stock numbers. The Marathon watch assembly manufacture has been with the brand since 1938 and is located in La Chaux-de-Fonds, Switzerland. 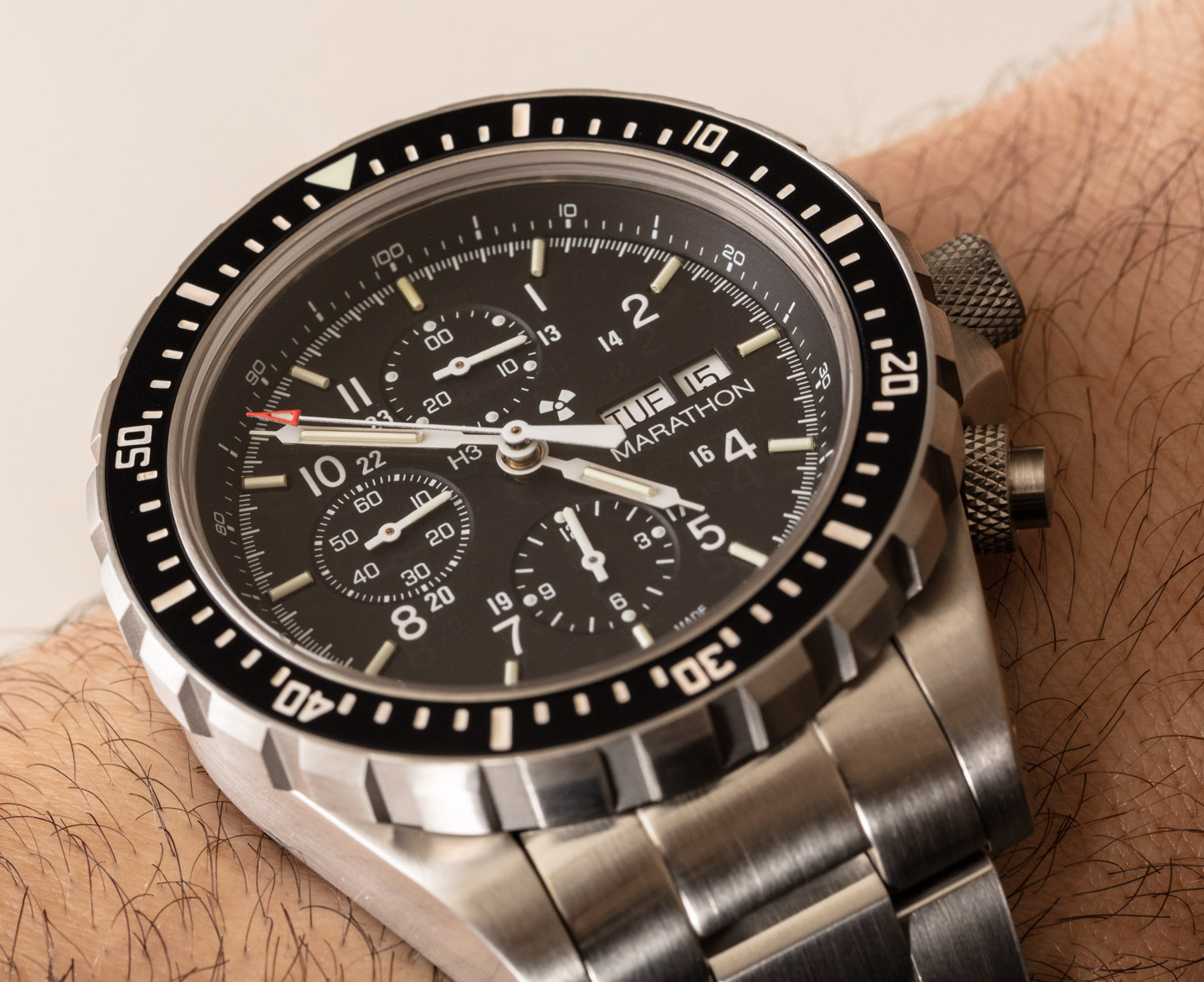 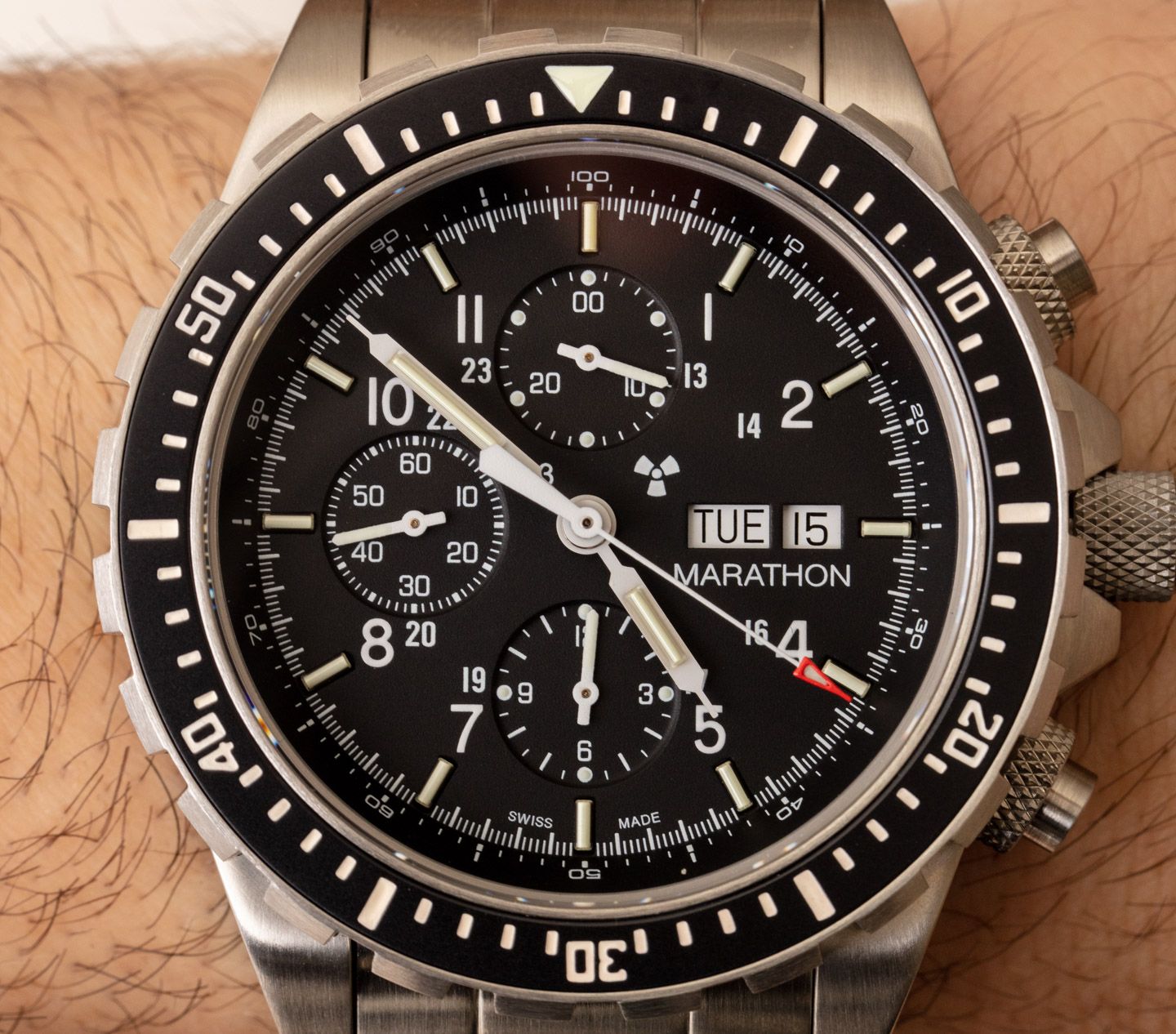 Marathon awkwardly has an official name for the CSAR of “Jumbo Diver/Pilot’s Automatic Chronograph CSAR 46mm watch. I mean the name IS accurate, but it isn’t exactly elegant sounding. Just calling is the CSAR might be OK, or Jumbo CSAR might work too. A note on the 46mm-wide (18mm-thick) case size: Yes, the CSAR is big and heavy. It also looks really cool. If you aren’t into bigger watches, that is fine since there are a lot of other watches out there for you. There is a reason this watch is 46mm-wide, and if you also happen to be able to pull off that size, this is a super-fun watch to wear.

The case is also water-resistant to 300 meters and has a flat AR-coated sapphire crystal over the dial. The lug-to-lug distance is about 55mm, and given all the steel of the watch, the CSAR needs to be worn snug on your wrist so as not to flop around a lot. Marathon actually sells the CSAR on both a rubber strap and this steel metal bracelet option. Both are honestly a good choice. On the bracelet, this is about as big a watch as I can get away with, but it’s actually pretty comfy, though I think to be safe I’d recommend most people try the CSAR with the rubber strap on first. 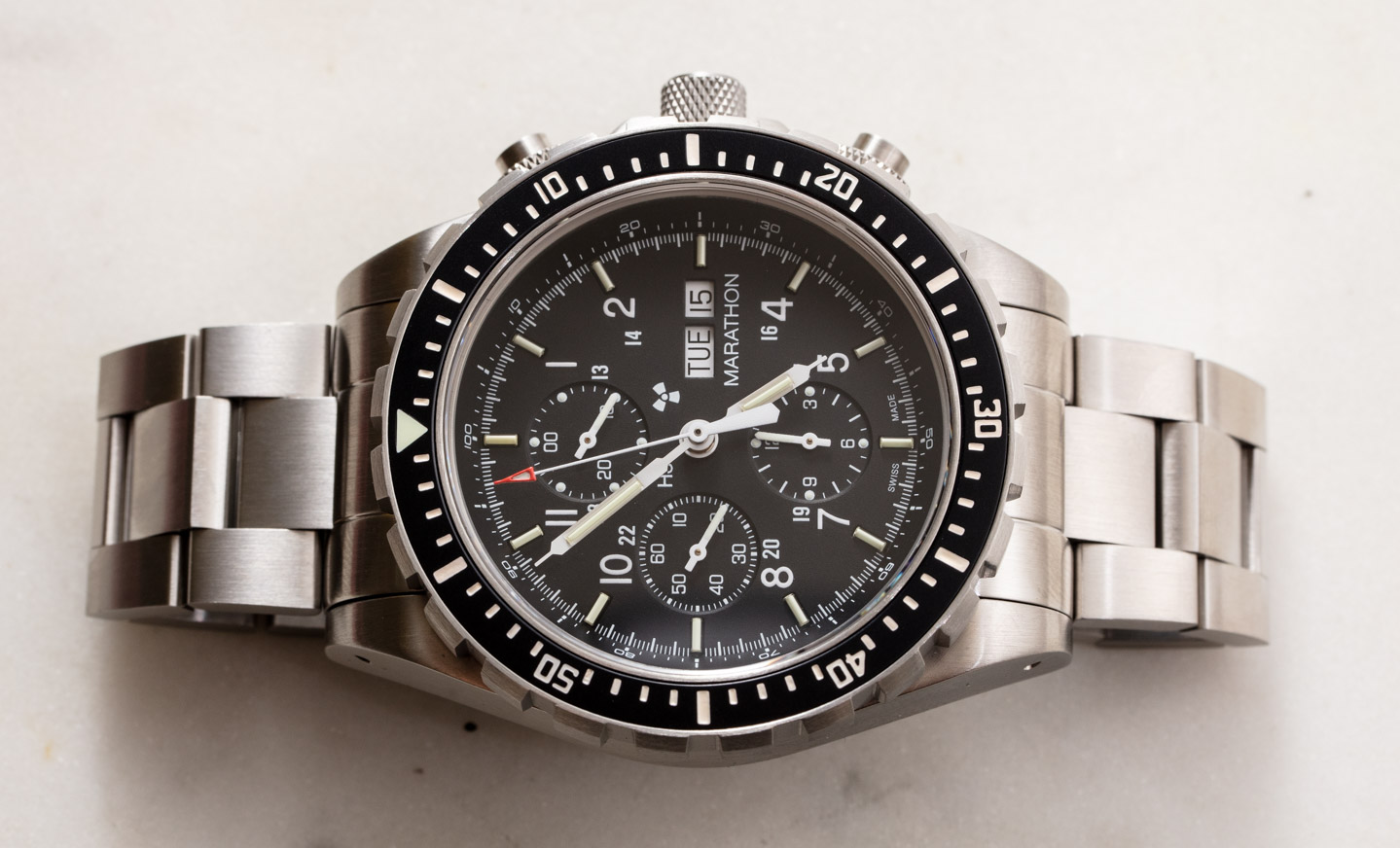 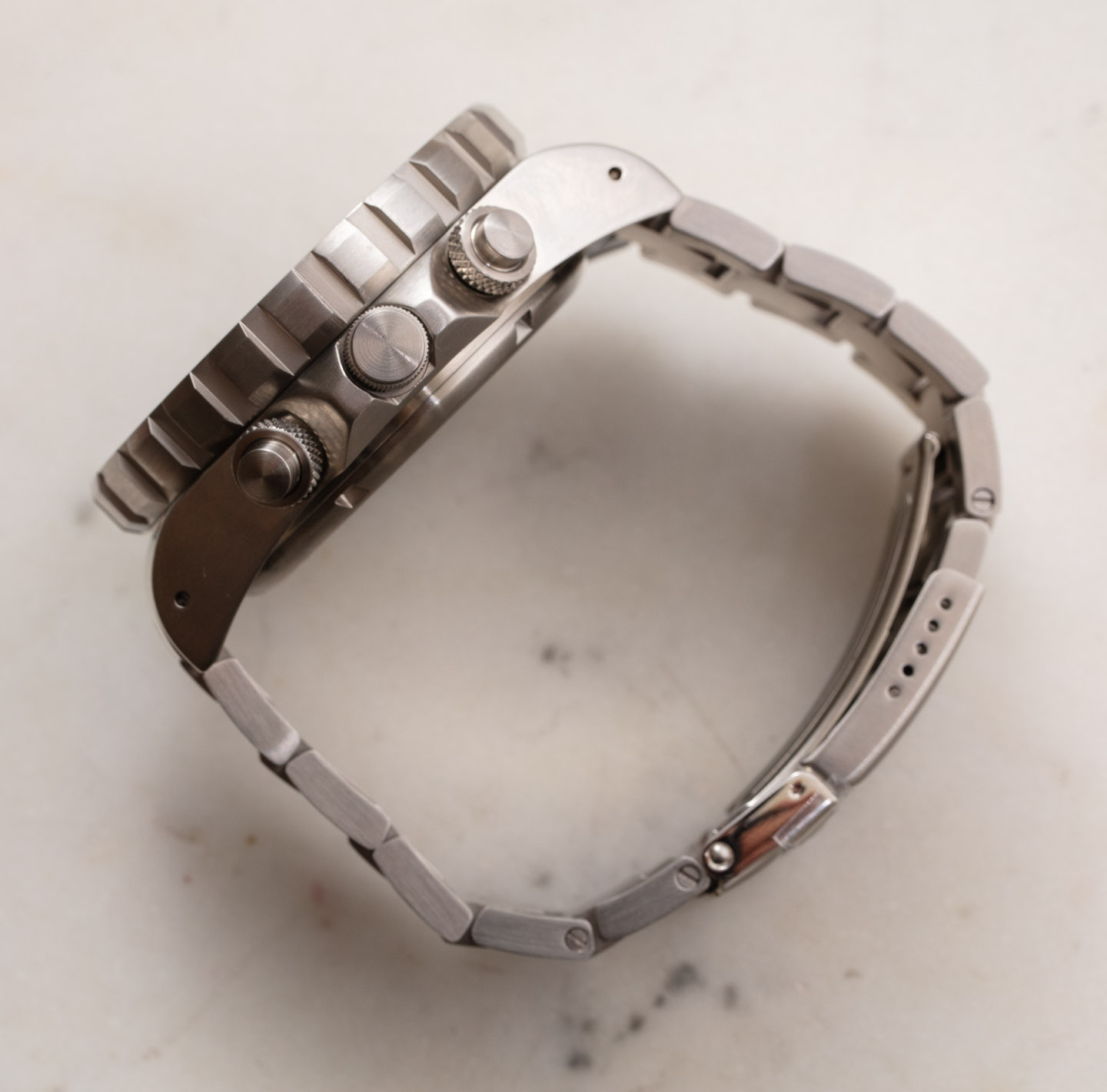 The reason the CSAR is 46mm-wide, in my opinion, is the fact that this allows the dial size to ideally blend legibility with a look that doesn’t cut off or overlap any dial elements. While I am personally OK with dials that have overlapping elements and numerals, some watch fans cannot handle it. I sympathize with them, and I think those people would love how the Marathon  Jumbo Chrono treats the dial indicators. It’s true that Marathon also makes the 46mm-wide JDD Diver watch (aBlogtoWatch) review here. That is another fun model, but it doesn’t feel as “complete” as the CSAR with the chronograph subdials and screw-down pushers.

Speaking of pushers, the crown and the pusher screw-down seals all have a very nice, precise knurled texture that offers great grip and isn’t too sharp. The extra-thick (tall) steel rotating bezel is printed with luminous markers, and is a joy to turn (feeling dutifully “expensive.”) The watch dial is devoid of anything one might suggest is decorative. This watch dial is about as no-nonsense as a tank — and that’s why we love it. 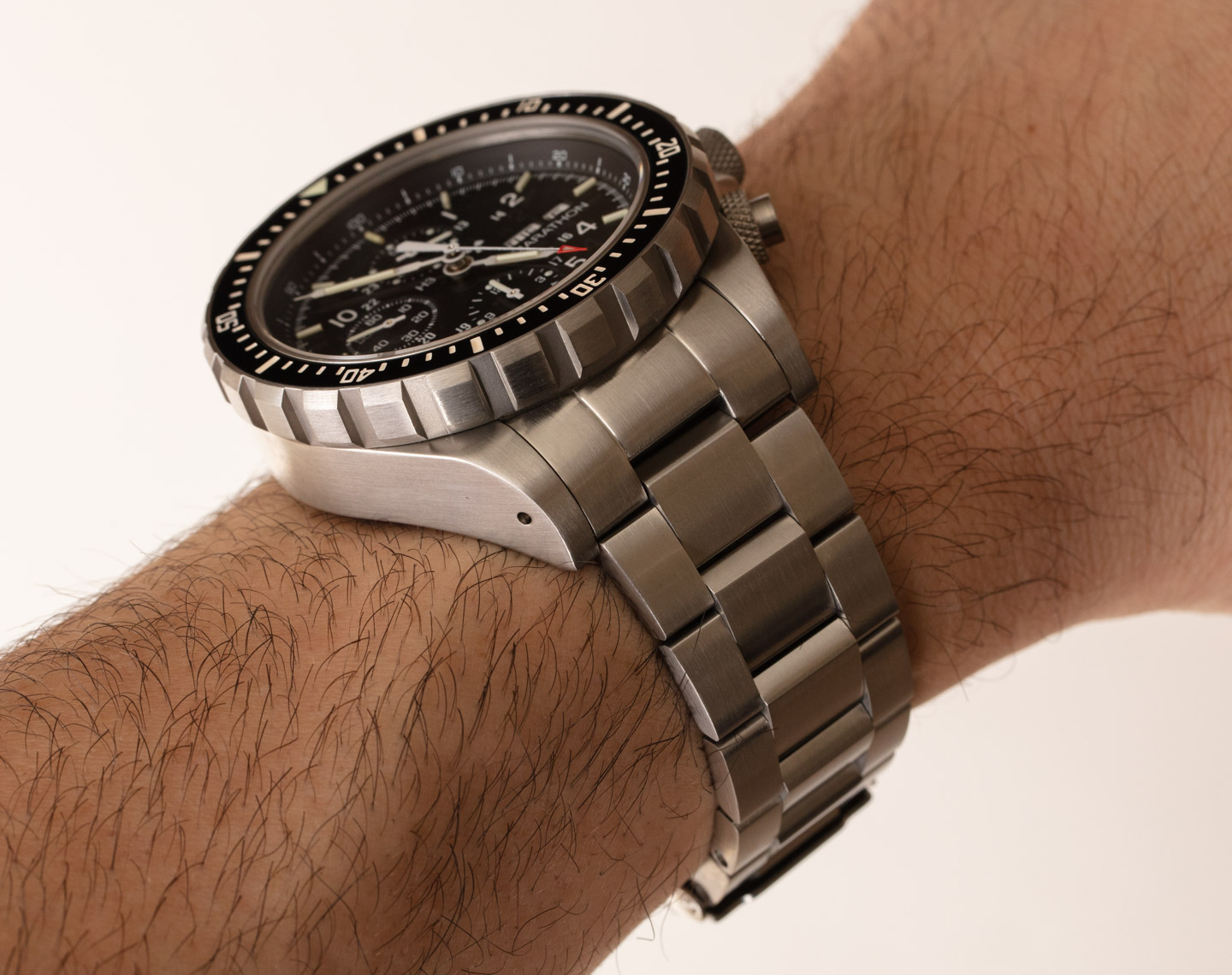 Despite not really trying to be a “designed watch,” the CSAR does so many things well such as proportions, finishing, durability, and legibility, that the end result can’t help but be called beautiful — though it’s not a show queen. This watch has a distinctly quiet macho vibe. It isn’t quite going for attention, but it also doesn’t mind if you notice its muscles.

Let us also not forget that the dial makes use of Swiss Made tritium gas tubes that glow naturally in the dark for at least 20 years. It is also nice that Marathon managed to design them into the chronograph subdials as well as the main hands and hour markers. Inside the watch is the venerated Swiss Made ETA Valjoux 7750 automatic chronograph movement. If there was ever a good time to call the 7750 a “workhorse,” it is now. The movement operates at 4Hz with about two days of power reserve. It features the time, day/date calendar, and 12-hour chronograph. 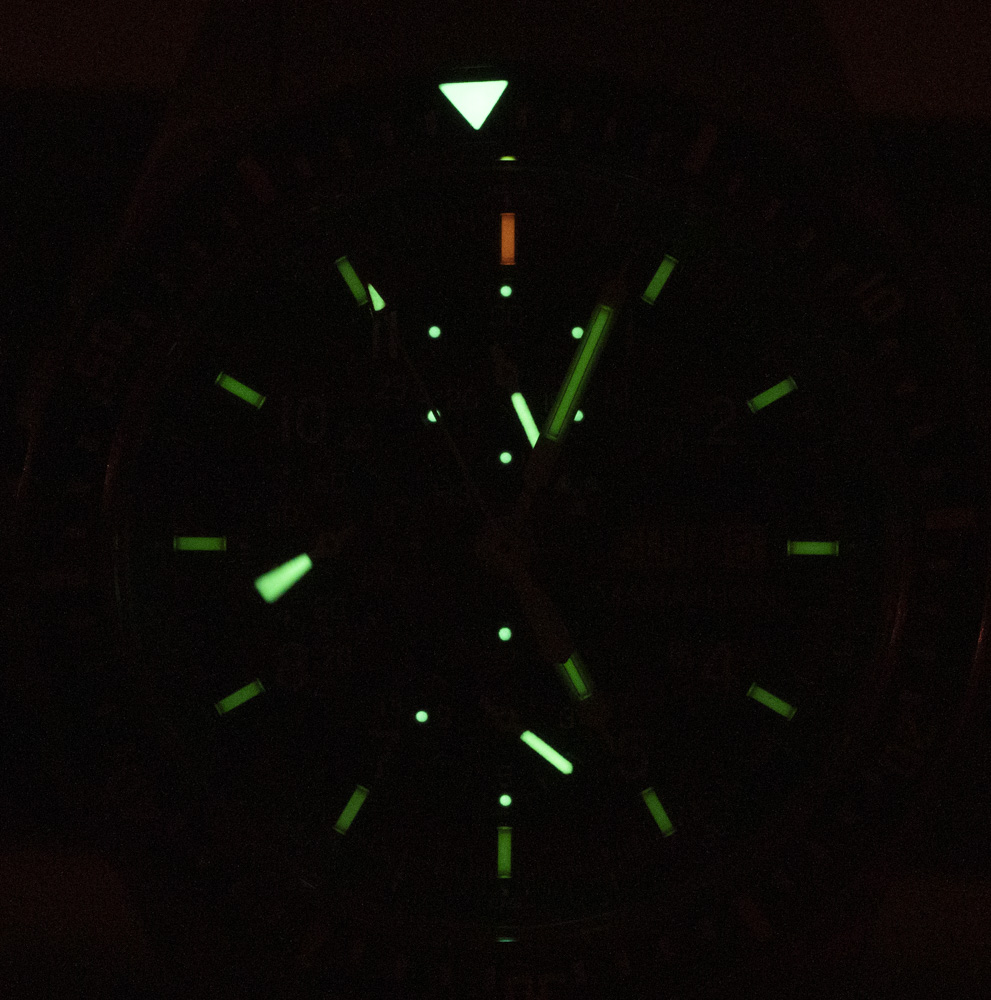 Really the only jab I can think of to take at the Marathon CSAR is the bracelet. It looks and feels fine, but it could be a bit more expensive-feeling (tighter tolerances and sturdy steel to match that of the case) as well as have a deployant buckle which hadn’t stopped being appropriate on a mainstream luxury watch around 20 years ago. Again, the deployant is fine, but it isn’t any fancier than one you can get on a $300 Seiko watch. It will last you, but it doesn’t have the tactile experience of finely machined and polished metal (given that it is stamped). 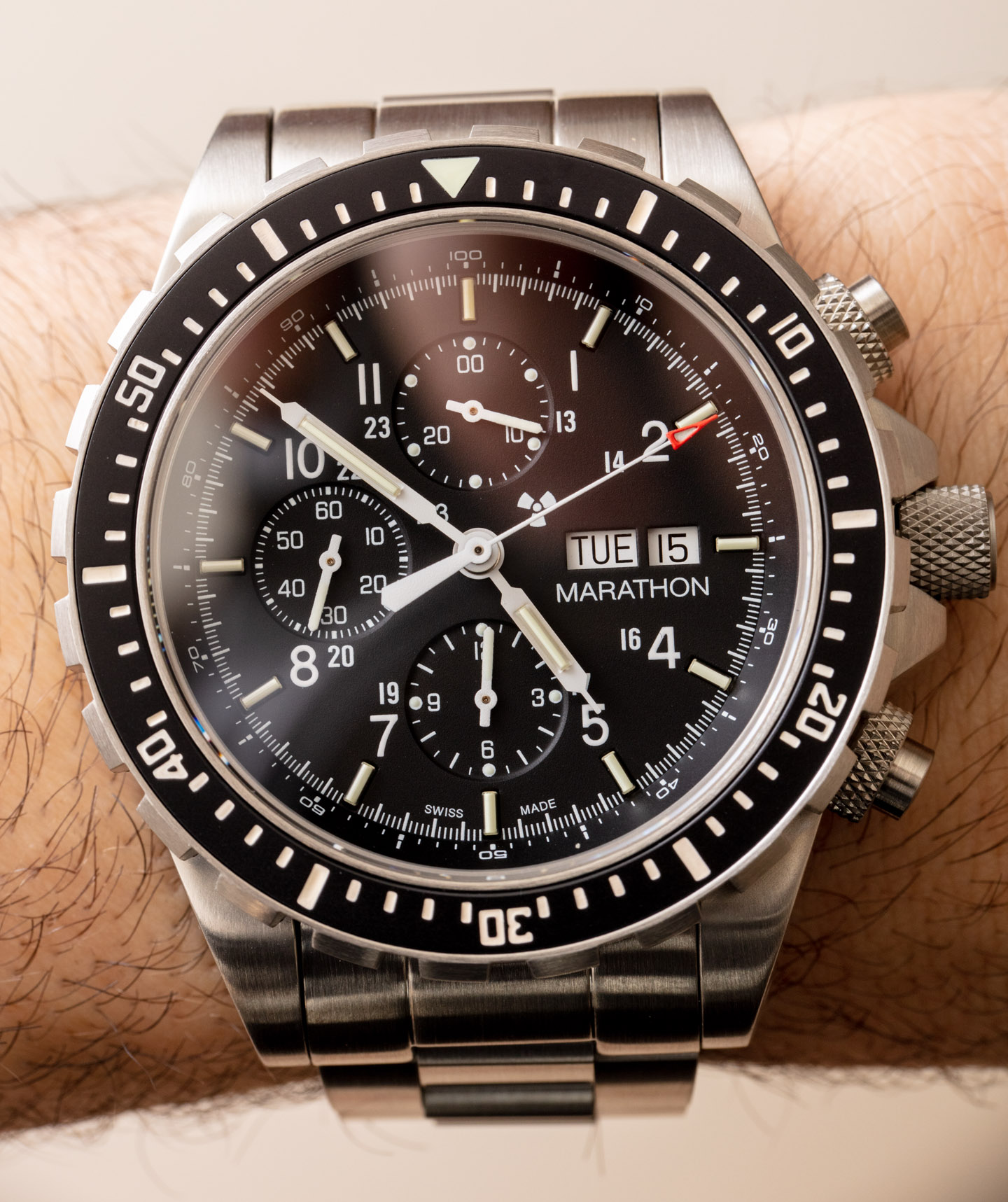 For me, the CSAR is a perfect watch, by many measures. It does feel a bit expensive these days, by competitive standards, but it is a very carefully assembled watch and authentically designed for military conflict. Marathon sells these to governments and armed forces. That means they need to justify the prices in ways that the luxury Swiss brands would shudder to do.

The intense focus on functionality and utility gives the Marathon Jumbo CSAR a very distinctive personality. It’s like the adult version of carrying an action figure soldier with you. It’s sort of a toy, but you get to look serious while toting it around. There are going to be plenty of people who decry the large size, but despite the heft, the proportions on the dial are great — and that really does save it, aesthetically. It’s a blast to wear, and because military watches are pretty much always “in,” the design is quite fashionably versatile. That said, I hope tMarathon starts to get a bit more fashionably versatile with the CSAR. It could use an all-black treatment, for sure (would help it visually wear smaller), as well as some different polishing or aesthetic treatments. A new bracelet buckle might also be a welcome upgrade. The Marathon CSAR is still pretty unknown by many collectors and thus also underrated. The Marathon Jumbo Diver/Pilot’s Automatic Chronograph “CSAR” 46mm reference WW194014BRACE has a retail price of $4,260 USD. Learn more at the Marathon watches website here.

Necessary Data
>Brand: Marathon
>Model: Jumbo Diver/Pilot’s Automatic Chronograph “CSAR” – 46mm reference WW194014BRACE
>Price: $4,260 USD
>Size: 46mm wide, 18mm thick, and 55mm lug-to-lug.
>When reviewer would personally wear it: As a burly daily-wear tool watch when “thick-wristing” it won’t get in your way.
>Friend we’d recommend it to first: Tool and military watch lovers seeking to wear a product that no one can ever accuse of being a “poser.”
>Best characteristic of watch: Excellent fit and finishing along with delivery of “military-spec instrument” functionality promise. Ends up feeling very handsome and competent. Conservative looks that will age gracefully.
>Worst characteristic of watch: Bracelet option isn’t over-priced, but could be a bit fancier for a watch of this caliber.