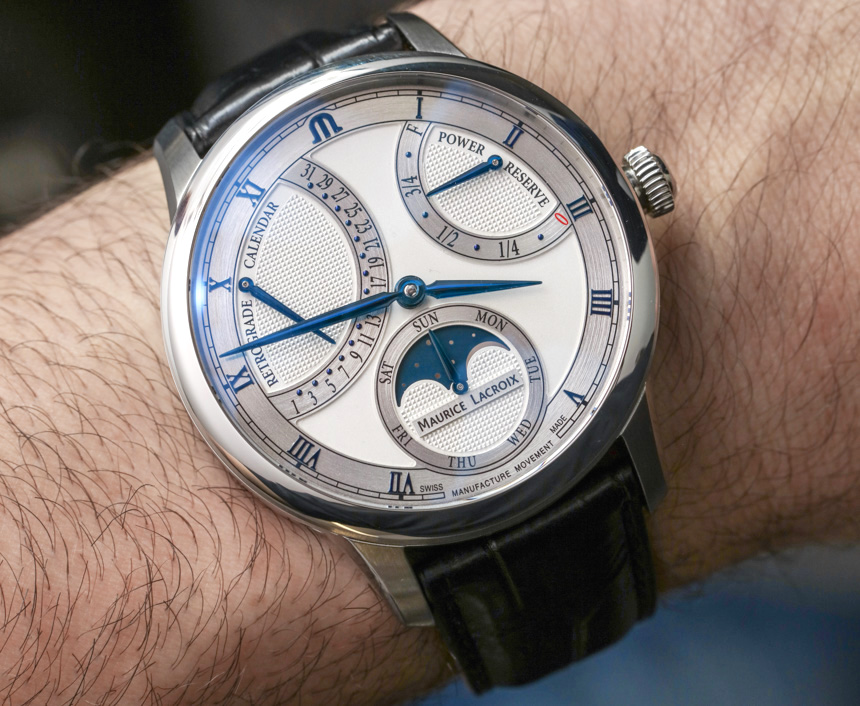 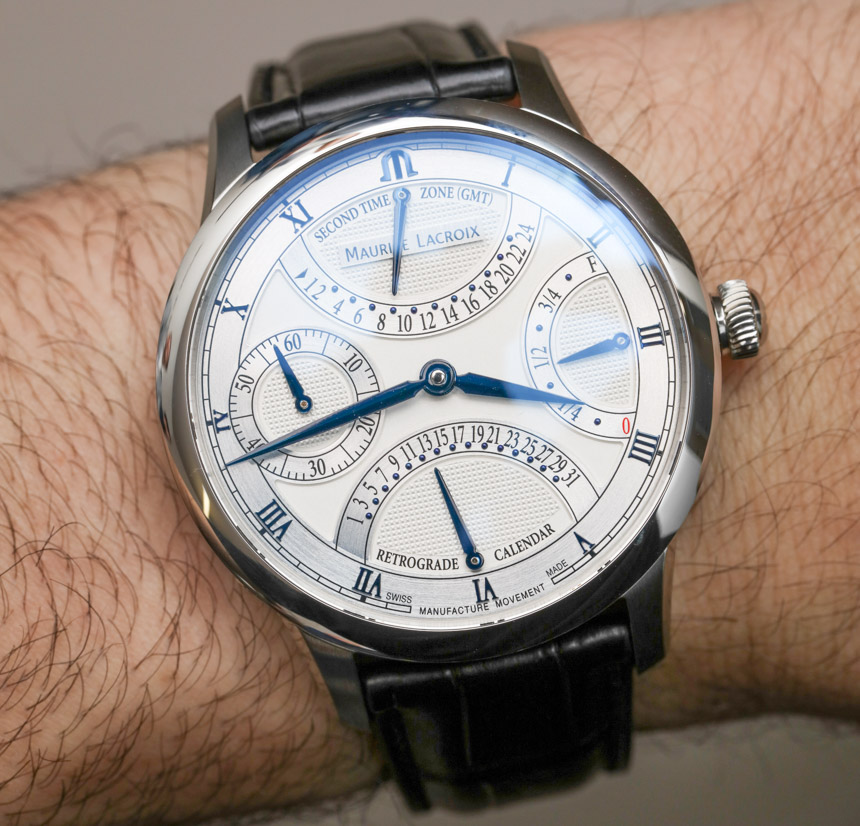 Think value timepieces and you probably won’t always think of Maurice LaCroix, but the fact is that the brand actually makes quite a number of interesting pieces at relatively affordable prices. The Pontos S Diver is one of the more handsome affordable dive watches around and for just $7,500, you would be hard pressed to find another skeletonized dial with a chronograph complication like the Masterpiece Chronograph Skeleton watch. Likewise, Maurice LaCroix’s new Masterpiece Double Retrograde and Masterpiece Moon Retrograde watches are two new watches from the brand that offer quite a lot of bang for the buck, as far as watches with retrograde displays are concerned. Here’s a closer look at these two new watches. 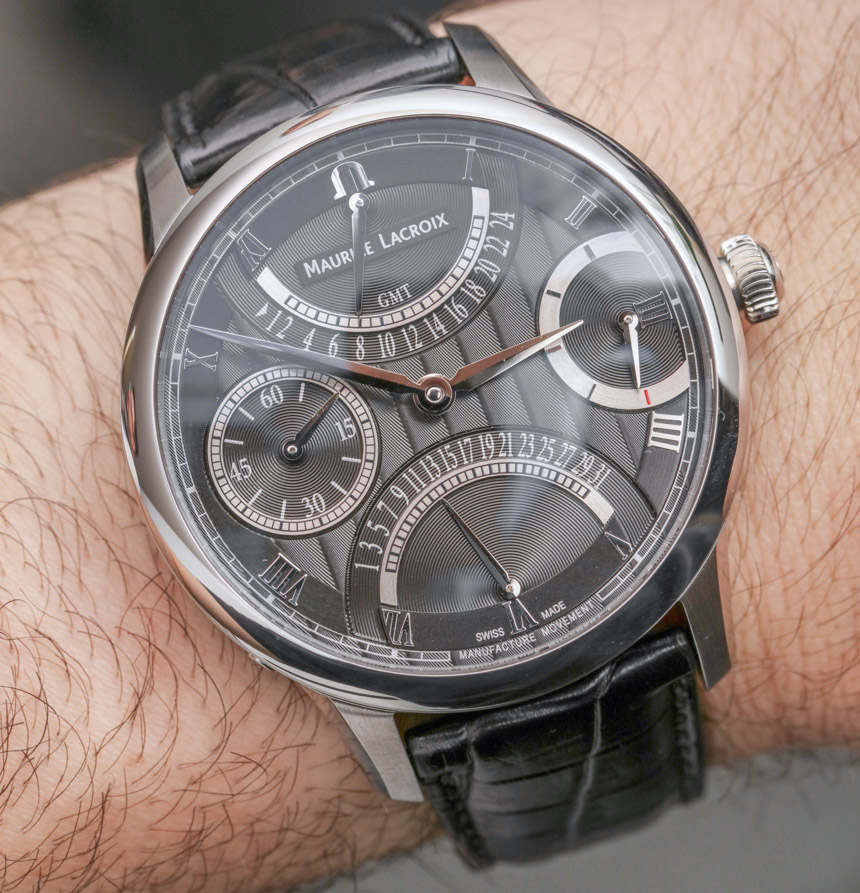 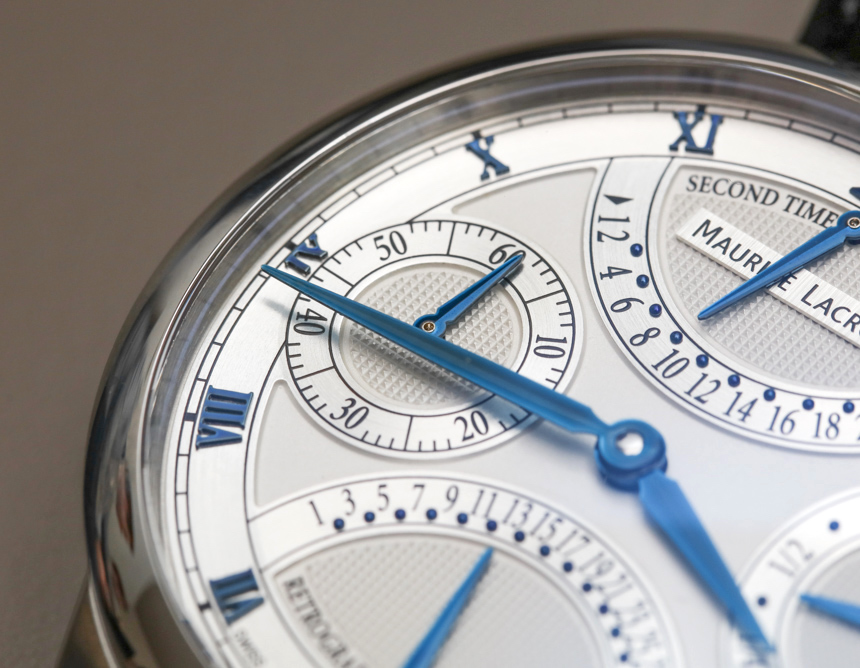 Let’s begin with the Masterpiece Double Retrograde watch. It comes in a 43mm wide stainless steel case with a mirror-polished bezel and lugs that are beveled and brushed. It also has a large knurled signed crown, which is easy to grip and operate. There are two correctors at the sides of the case at 2 o’clock and 8 o’clock for adjusting the watch’s two retrograde displays. Overall, the case is nicely constructed and wears well on the wrist. My only complaint with regard to wearability is the thickness. A little thinner would be better. The case is water resistant to 50m – good enough for daily use. 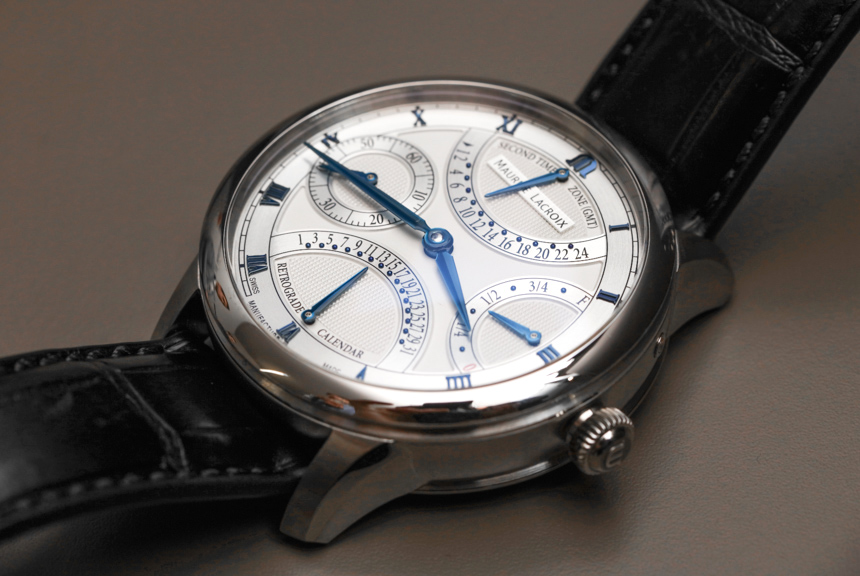 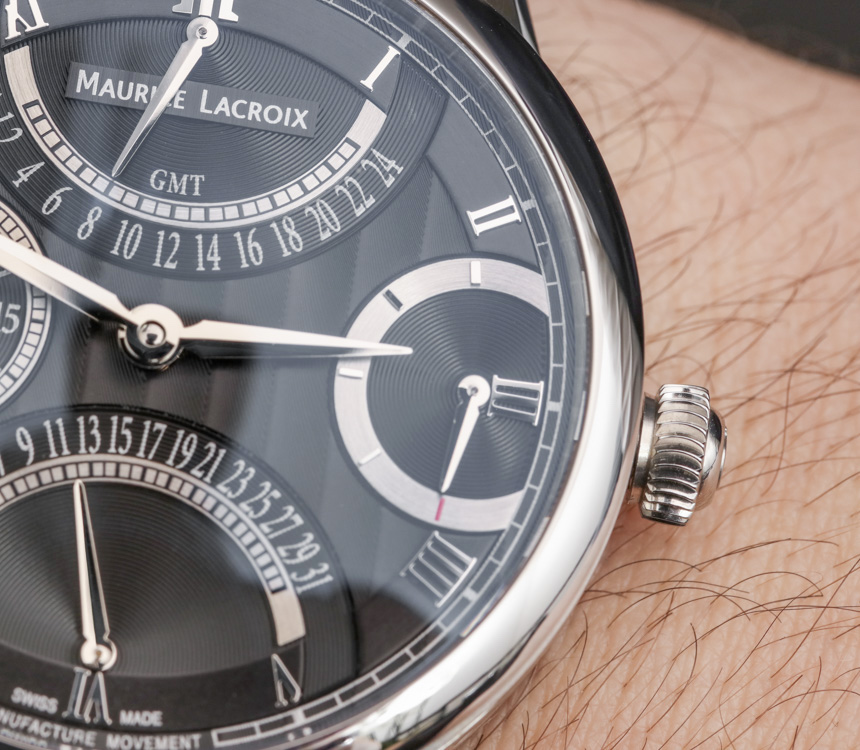 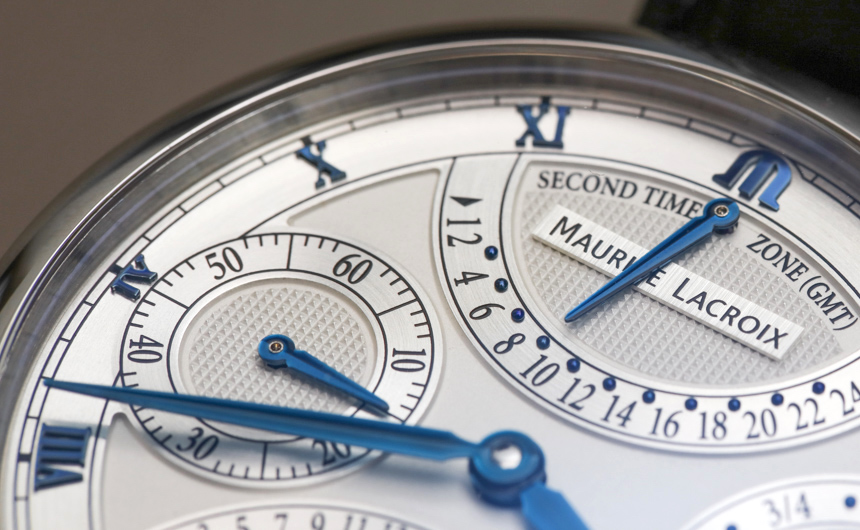 The silver dial variant of the Masterpiece Double Retrograde watch has diamond-cut blued hands for the hour and minute hands as well as all the hands of the various indicators. The hour indices, in Roman numerals, which sit on a silvered chapter ring that is surrounded by a railroad-style minutes track, are blued as well – so are the various small indexes for the retrograde displays and power reserve. The silver and blue color scheme is not only attractive but also contrasting and this makes the watch highly legible and the various indicators easy to read. To add more visual flair to the dial, the various indicators and sub-dials are embossed with Clous de Paris. 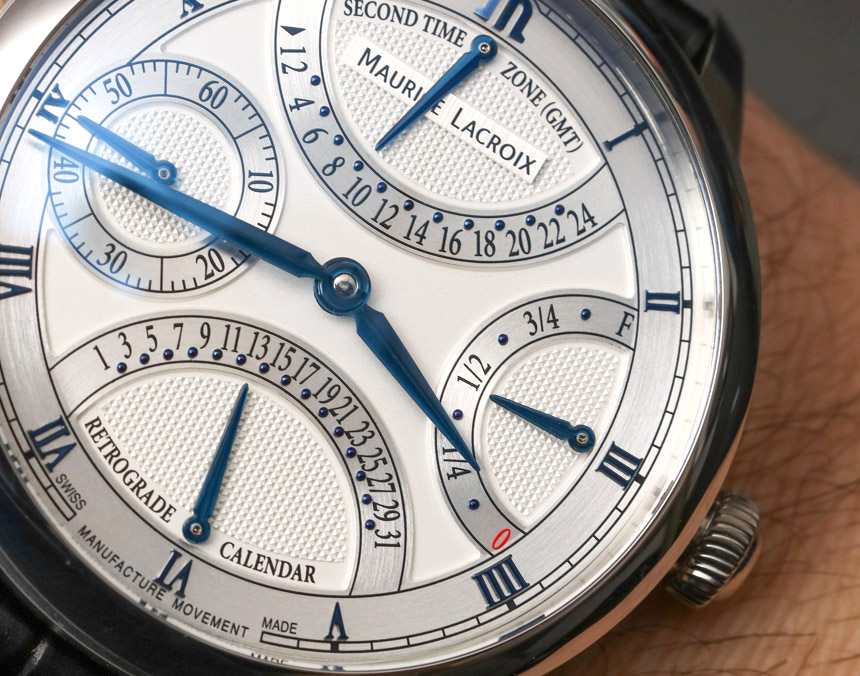 An interesting thing to note is that at 6 o’clock, underneath the retrograde date display are the words “Manufacture Movement.” It seems that Maurice LaCroix is eager to remind wearers that their watch is a little special because it has an in-house movement. 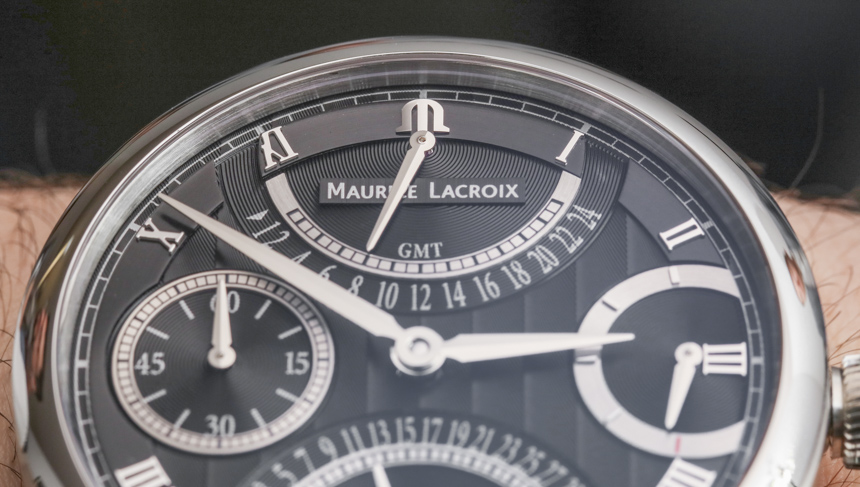 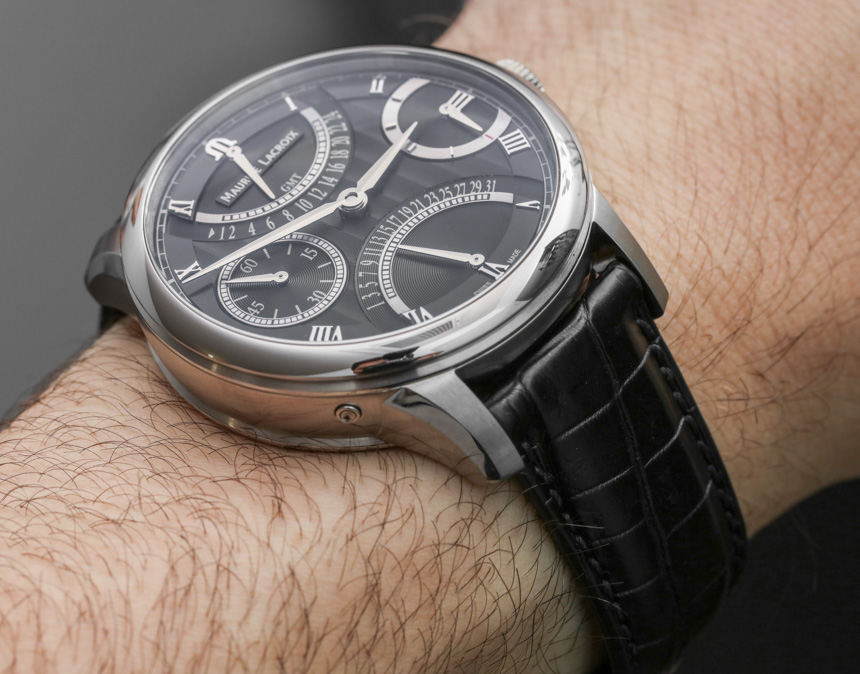 The black dial version of the watch features a different color scheme and is more understated in appearance. While the dial is black, the hands and indices are rhodium-plated, which gives the dial a gray on black color scheme that is more somber. Though the positions of the various registers and indicators are unchanged, the dial has different finishes and slightly different styling elements. The main dial, for example, features a vertical brushed finish, while the various registers and indicators have a guilloché of concentric circles. And in place of applied indexes on the two retrograde indicators are railroad-style tracks. Personally, I find the white dial version to be more legible, and also more flamboyant. 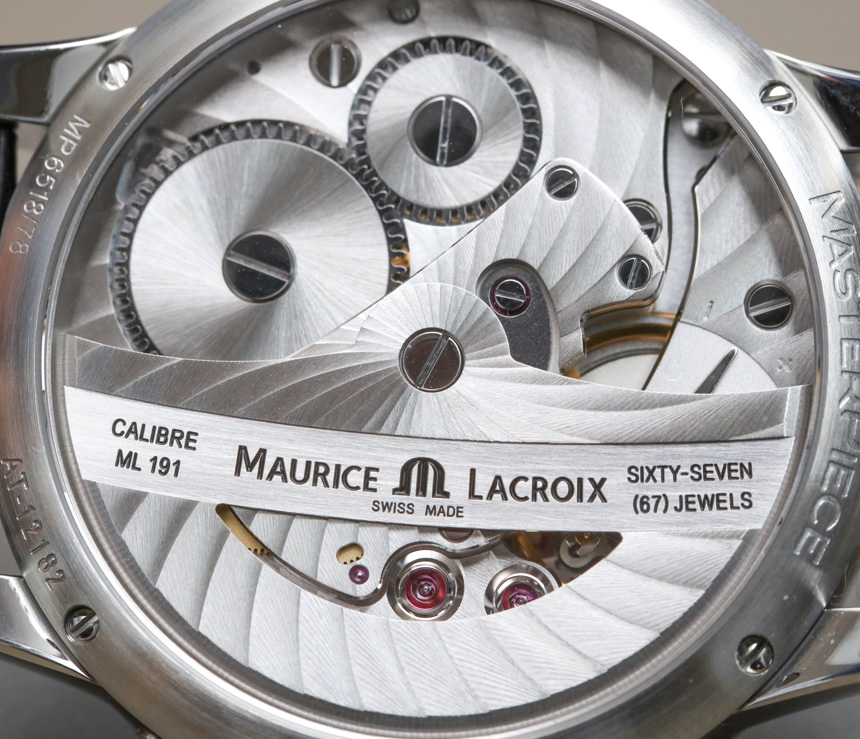 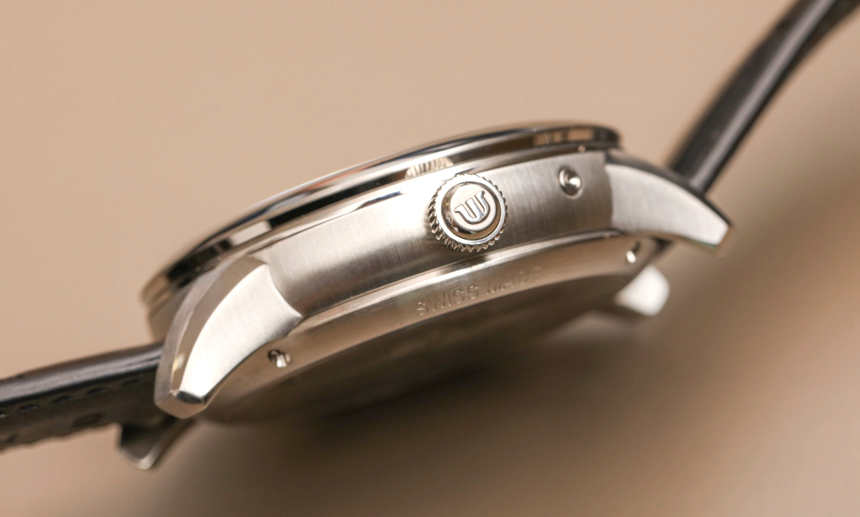 The Masterpiece Double Retrograde is powered by the in-house ML191 movement – a self-winding movement that beats at a leisurely 2.5Hz and has a power reserve of 52 hours. It is visible through the case’s sapphire display case back and it is quite nicely finished, with rhodium-plated bridges with Côtes de Genève finishing and diamond-cut edges. The large rotor is rhodium-plated too, slightly skeletonized, and features Côtes de Genève decoration as well. 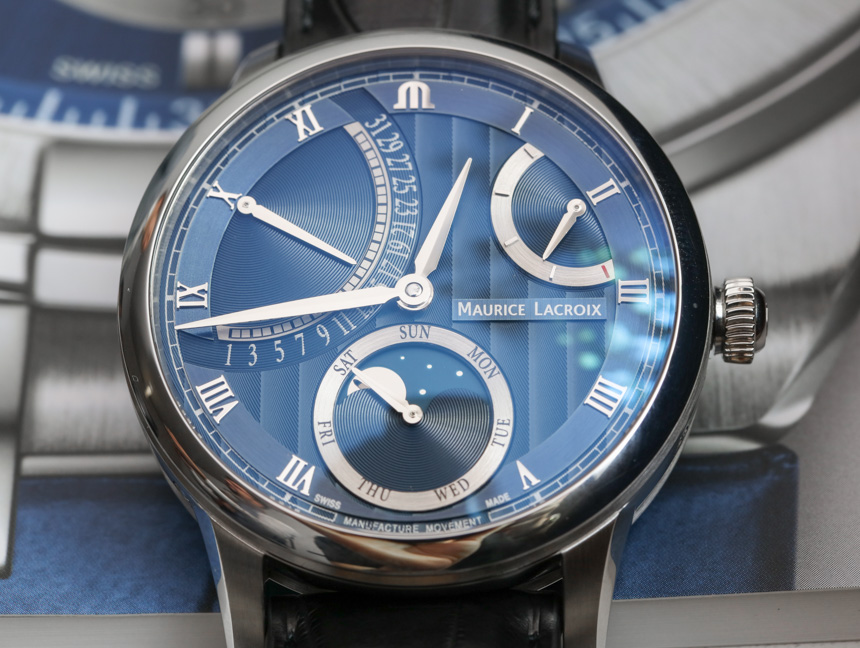 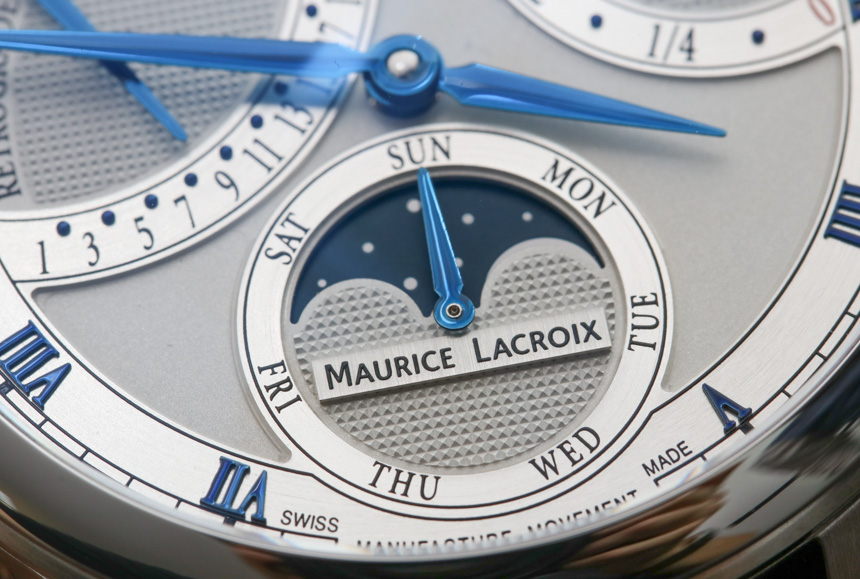 The Masterpiece Moon Retrograde watch has a case that seems identical to that of the earlier Masterpiece Double Retrograde watch, with the exception of the location of the pushers used to adjust the retrograde indicators. The case is made out of stainless steel and the size is the same at 43mm. The bezel is mirror-polished and the lugs are beveled and brushed. It also has a large knurled crown. Underneath the crown are two pushers used to adjust the watch’s two retrograde indicators. Water resistance is also 50m. 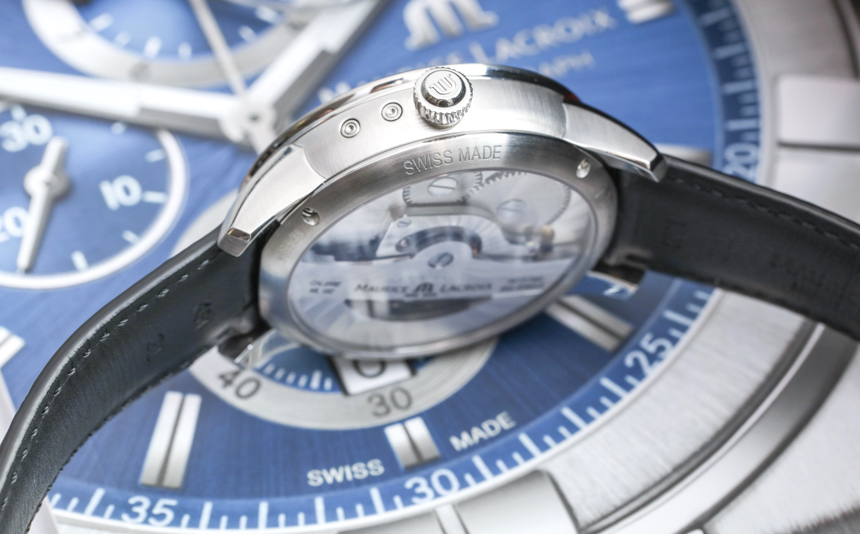 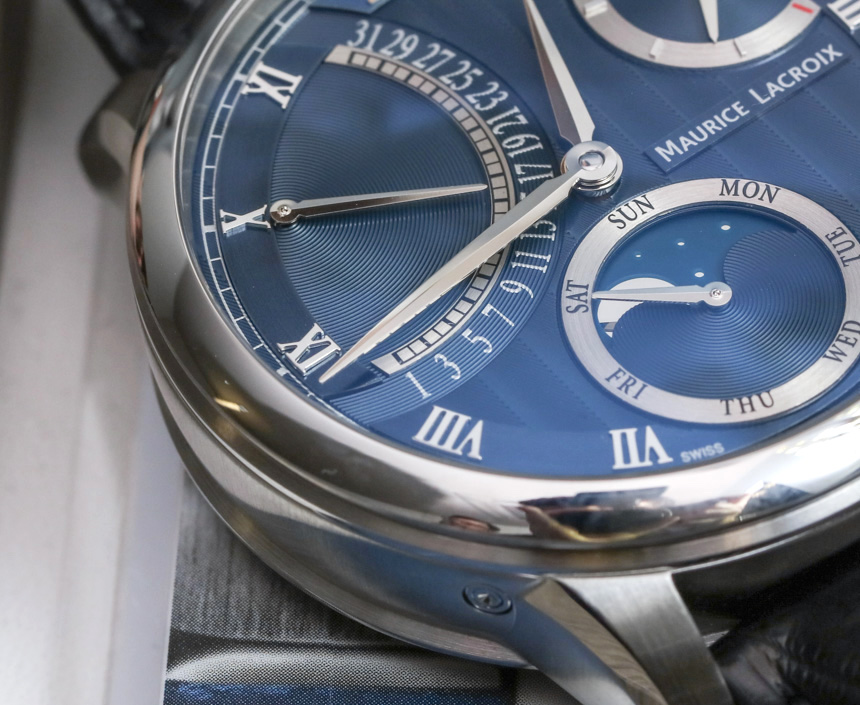 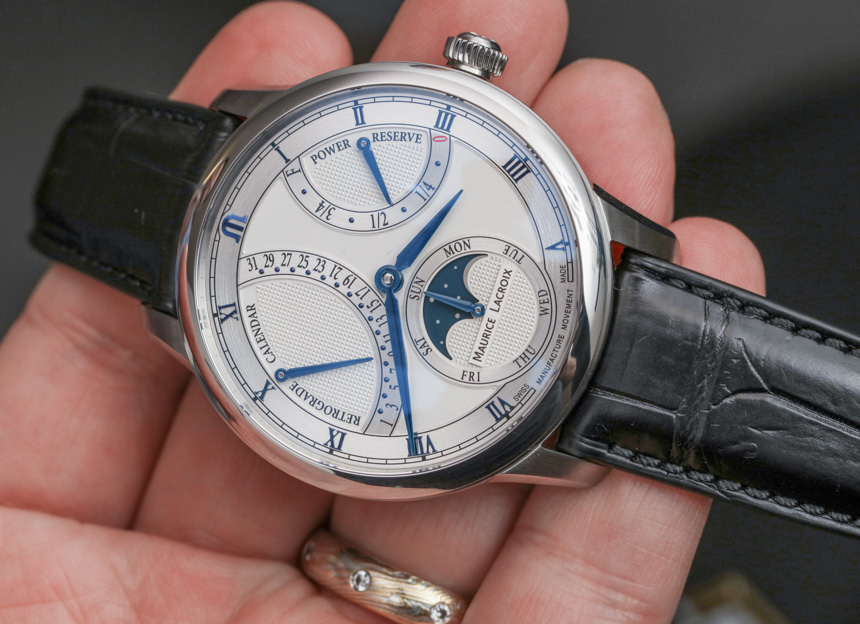 Three dial variants are available – silver, black, and blue. The difference between the three, apart from the color of the dial, is the styling and finishing of the dial. Otherwise, they are mostly similar. There’s a large retrograde date display at 10 o’clock, a large power reserve indicator at 2 o’clock, and a day and moon phase indicator at 6 o’clock.