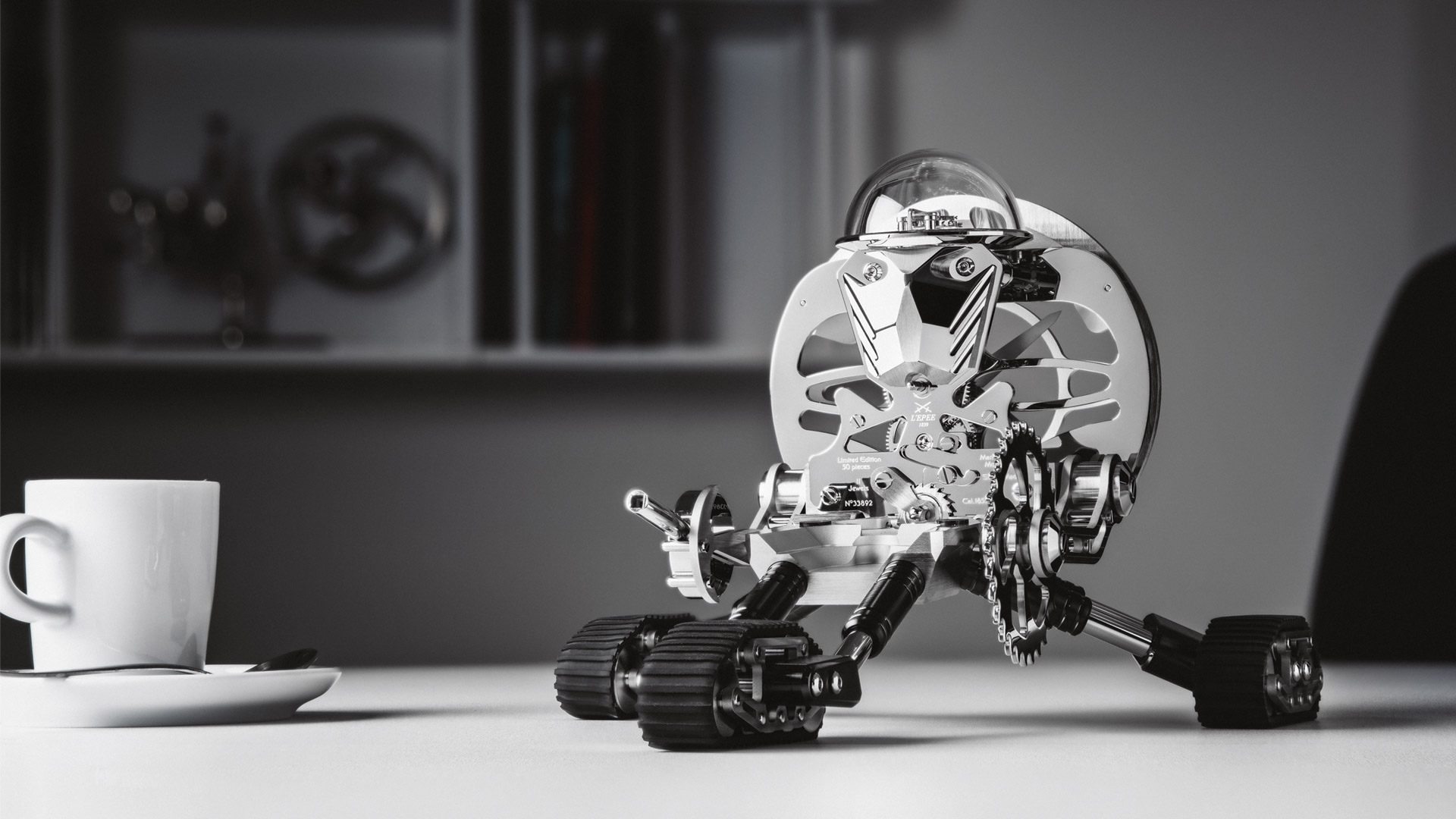 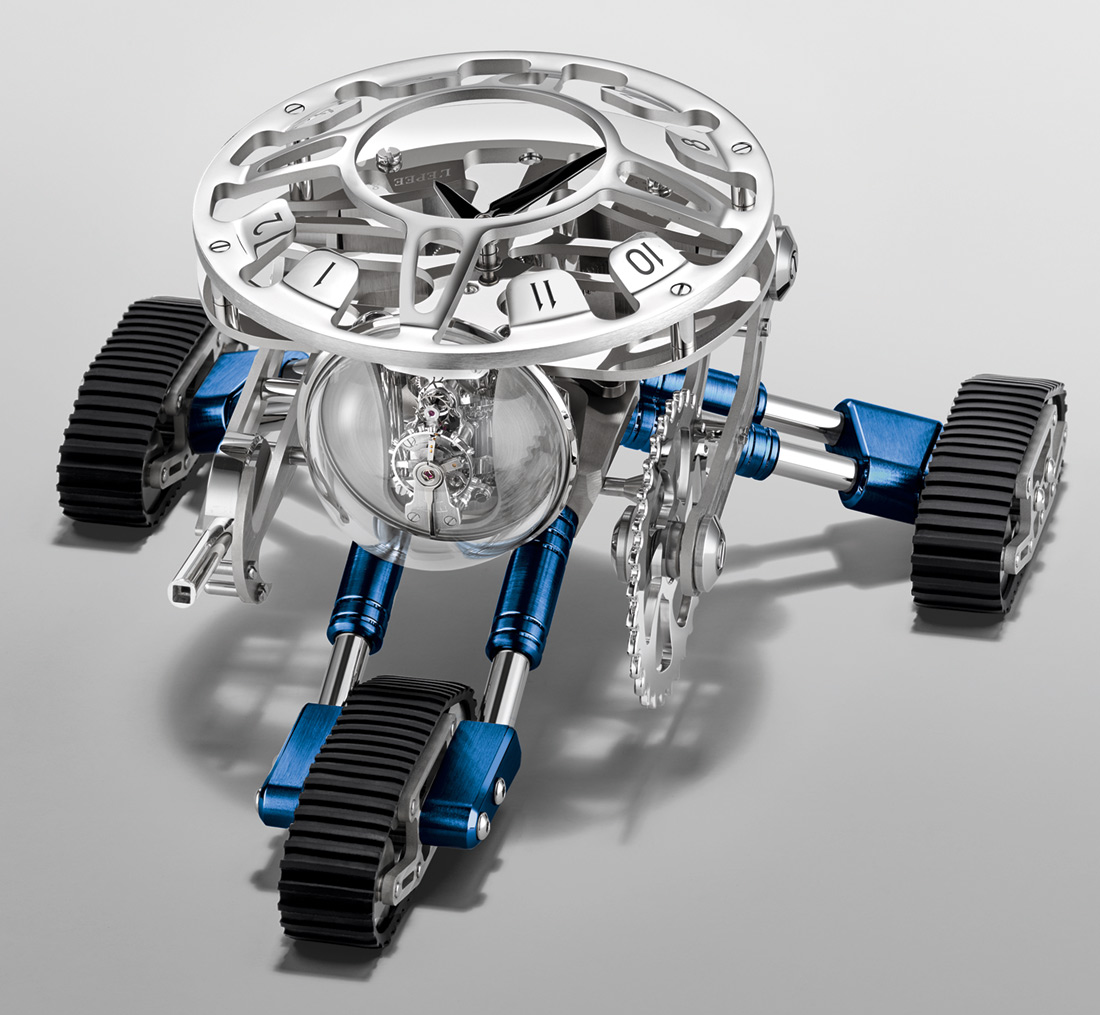 Are you ready for the next genre-defying, mind-expanding robot clock in the ongoing collaboration between MB&F and clockmaker L’Epée? MB&F’s horological art is so unconventional that it could be slightly confusing at first encounter. However, now more familiar and established, something like the new MB&F Grant produced by Swiss L’Epée is getting easier to wrap one’s mind around. The MB&F Grant is an extension of a concept that has taken multiple forms: that of mechanical desk clocks designed to also be interactive sci-fi toys and finished to haute horology standards. This one takes the form of a militant robot that transforms into a tank-like machine, and its evident complexity betrays the relatively simple time-telling indications. 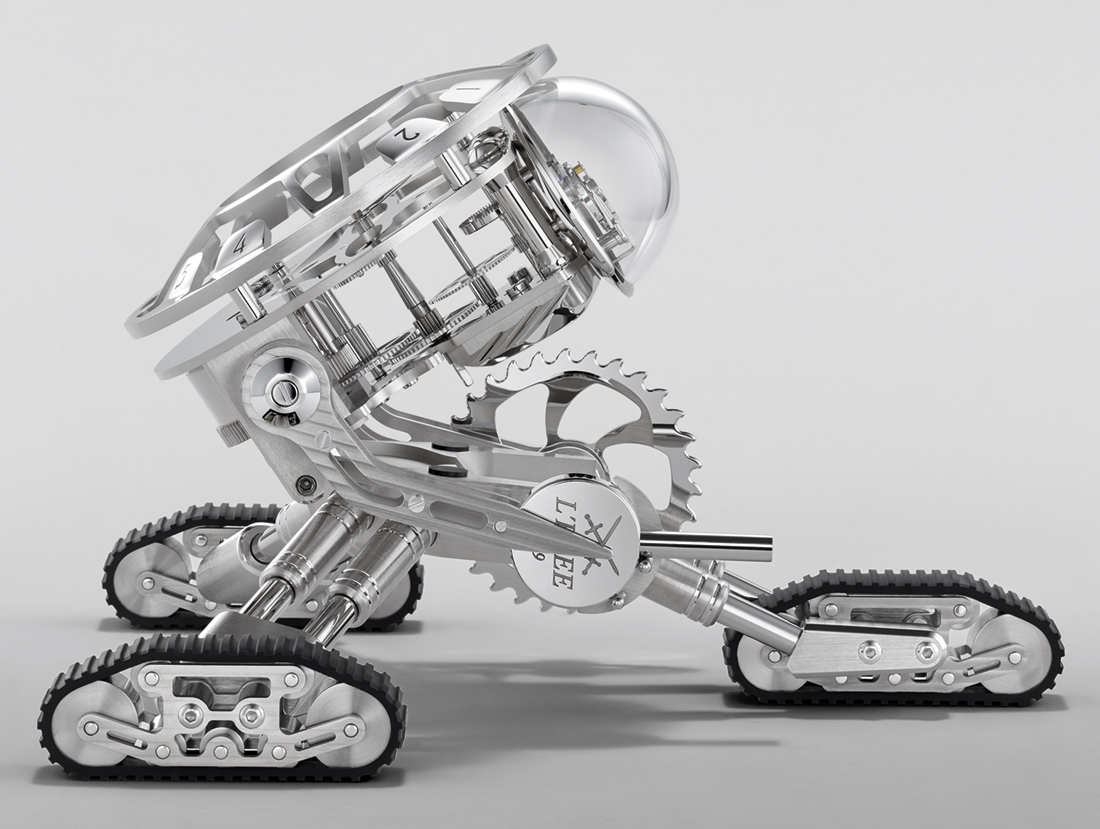 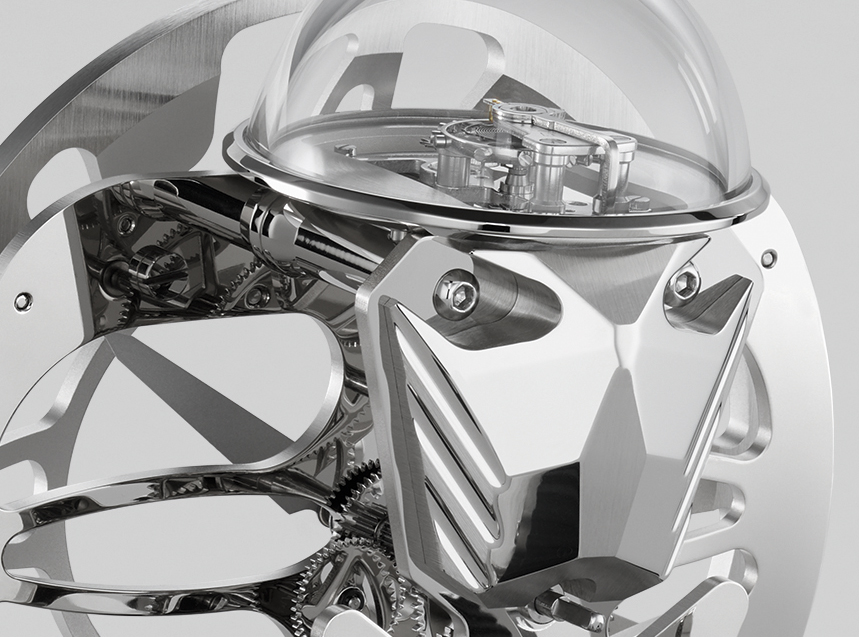 MB&F is on our radar first for their highly eccentric wristwatches. But, since 2013, the brand has further eschewed definition and traditional boundaries, extending their mechanical sci-fi vision to non-wrist-worn products. Those have ranged from desk and wall clocks, to music boxes, to over-engineered pens. MB&F collaborates with different artists and manufacturers for each project be they wrist-worn or otherwise – the “& Friends” part of Max Busser & Friends – but clockmaker L’Epée is a longtime partner. While animals, sea creatures, arachnids, and spaceships inspired many of these projects, robots are another recurring theme. 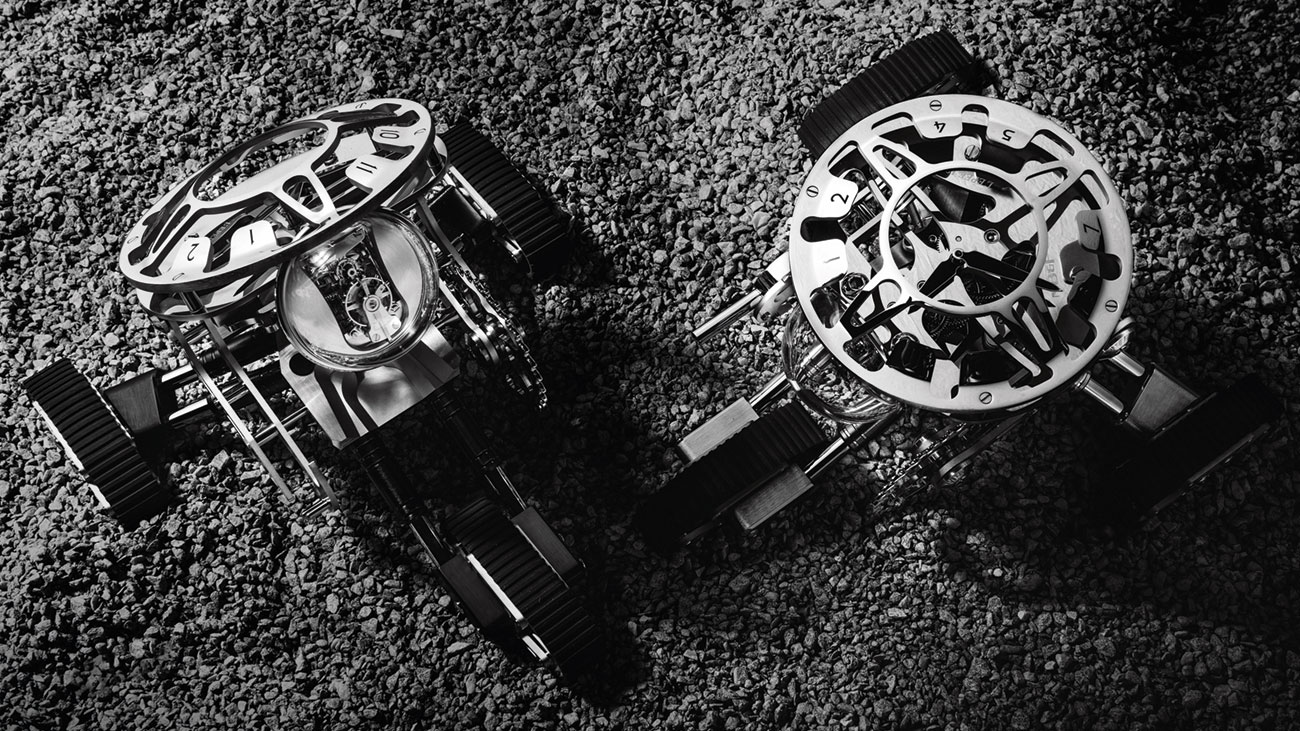 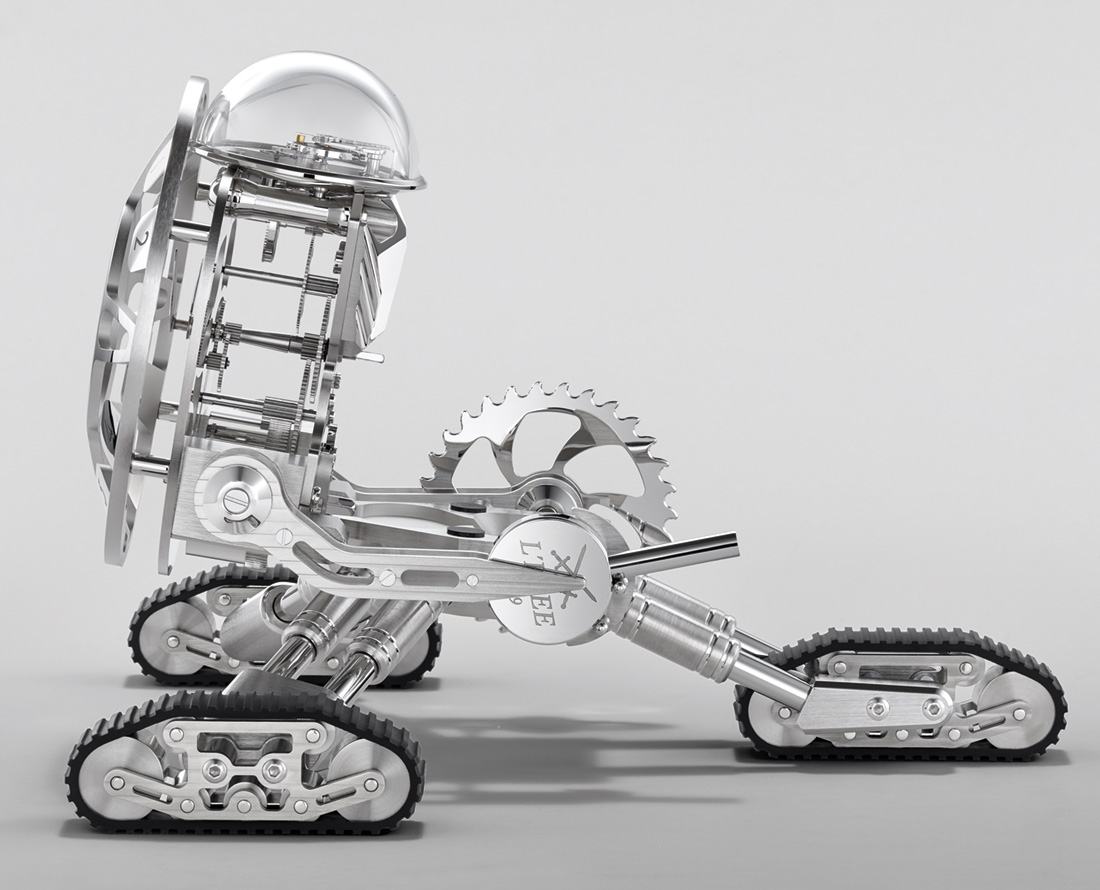 Thematically and in terms of appearance and functions, the MB&F Grant seems most closely related to the MB&F Sherman robot clock. Both named for WWII tanks, the MB&F Grant is a bit more aggressive-looking than the friendly Sherman that similarly had tread and a simple two-hand clock – the prominent escapement under a dome as its “brain” is a feature of all the robot clocks, I believe (see our hands-on with the MB&F Melchior here, for example). The MB&F Grant appears much more tank-like and weaponized: it has what resembles a circular saw blade and cannon and, depending on its position, looks more like a vehicle. 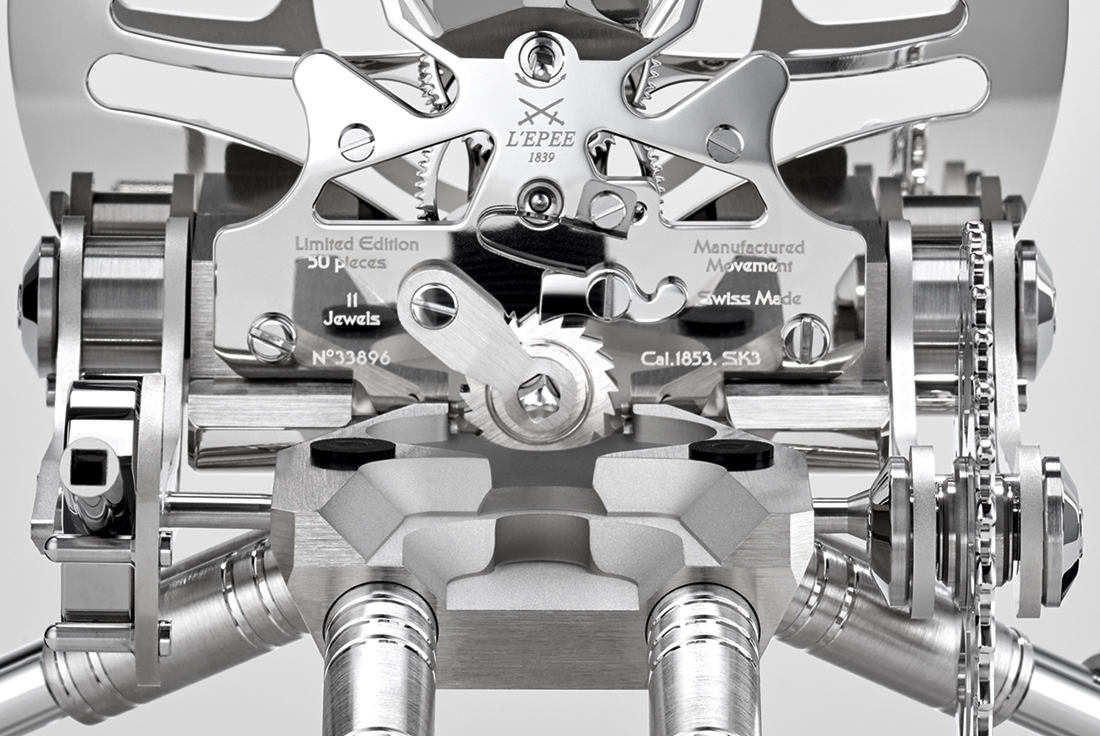 Yes, the MB&F Grant is posable in three different positions which lock into place, and in addition to Transformers, the brand’s materials mention Mad Max and Grendizer as influences. In “Position 1,” the assembly is folded in upon itself with the clock’s dial basically horizontal. The second, “crouching,” position is a 45-degree angle, which kind of looks to me like he is getting ready to head-butt something. This tilted posture is said to make for easy viewing of the time. In the last position, it appears as if the MB&F Grant has “sat up,” like a wrathful Sphinx you have angered. The dial/”shield” becomes a kind of chelonian back, his weapons look more like arms, and his “face” is visible. This “face” is somewhat abstract, with screws as eyes and what reminds me of some type of Transformers mask and an expression that looks either scowling or cold depending on the angle. 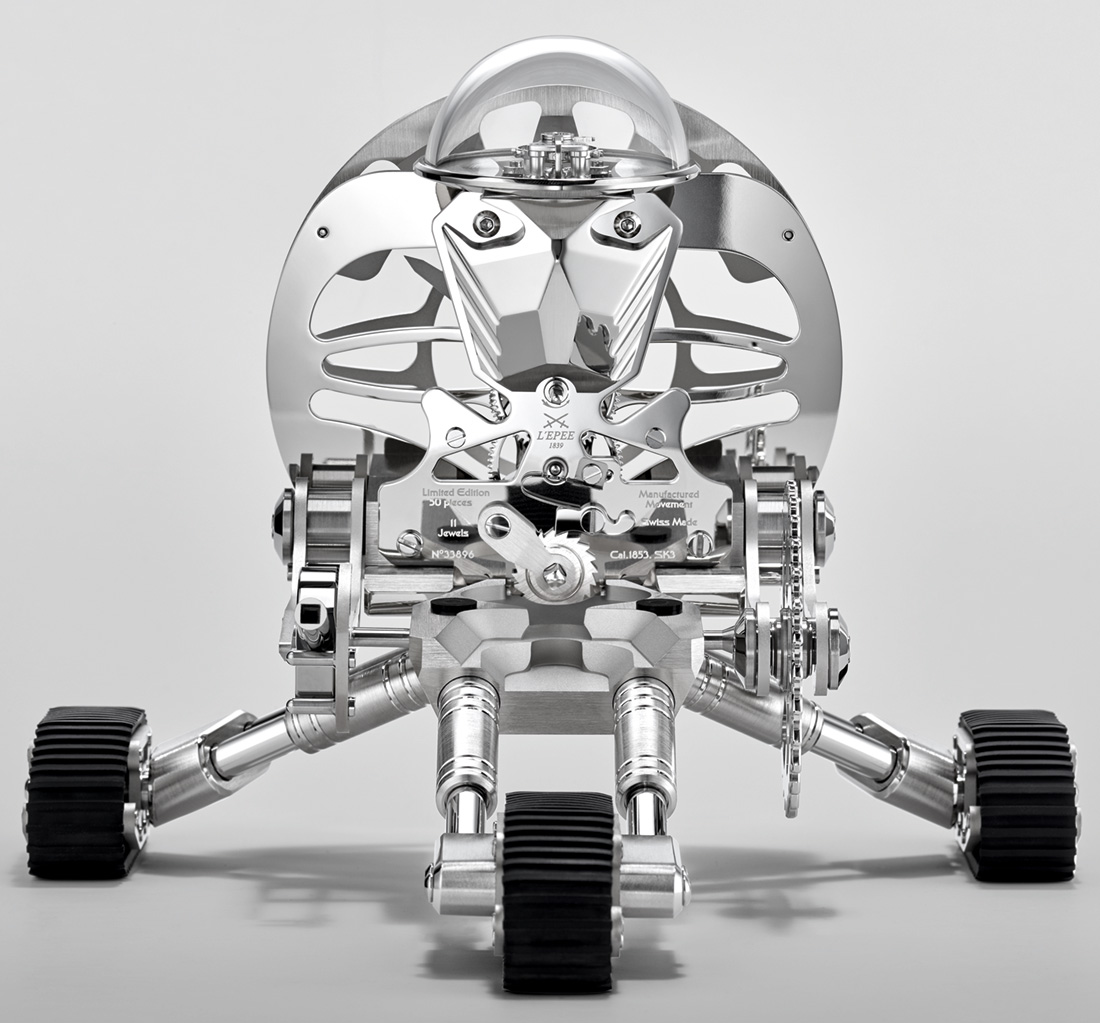 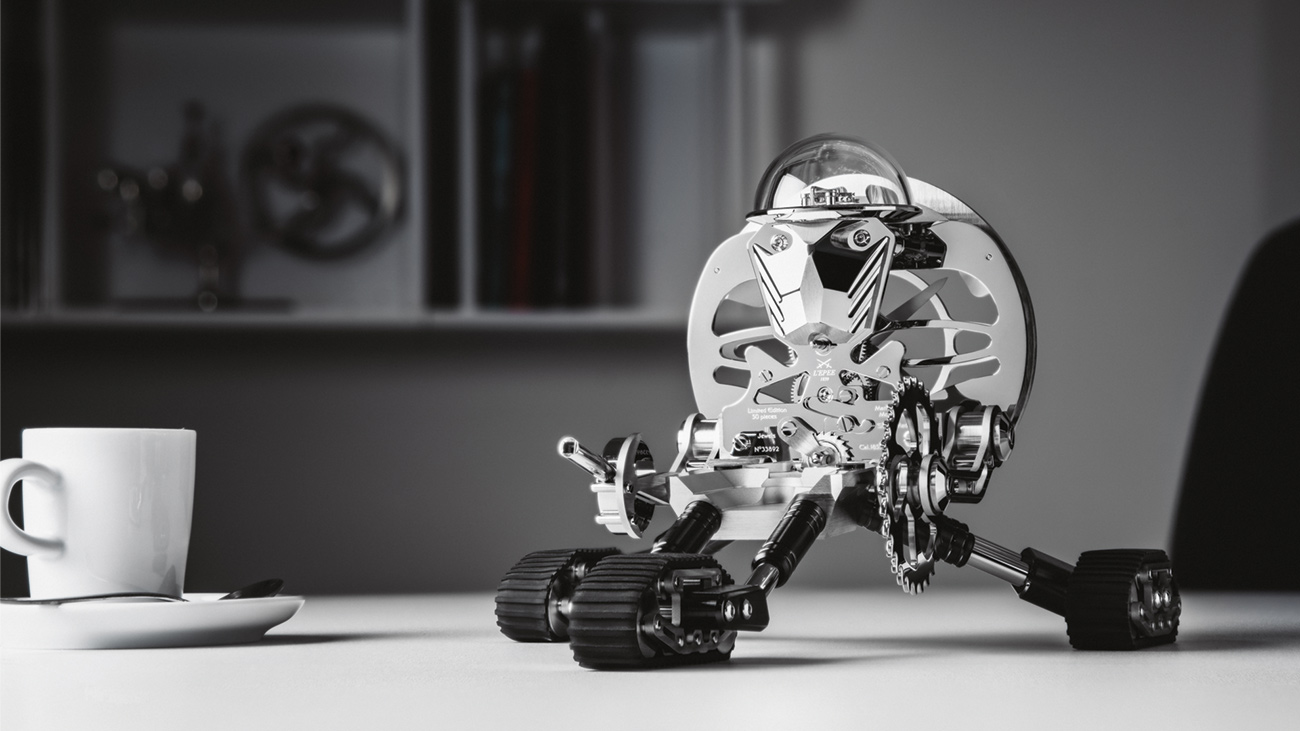 The whole body-plus-clockwork construction uses a total of 268 components in stainless steel, nickel-plated brass, and palladium-plated brass. The MB&F Grant weighs 2.34kg and sits 212mm wide and 115mm tall in its flat position and 166mm tall when it is extended vertically. Depending on its pose, the length will be between 231mm and 238mm. MB&F says that hand-finishing clock components is “significantly more challenging” than wristwatch movement parts because there is more surface to work on – which seems counterintuitive since most people probably assume the small size of wristwatch movement parts is what makes it arduous. Each entails its own difficulties, I suppose. The MB&F Grant’s various body and movement parts include polishing, sandblasting, circular and vertical satin finishing, Geneva waves, and anglage. 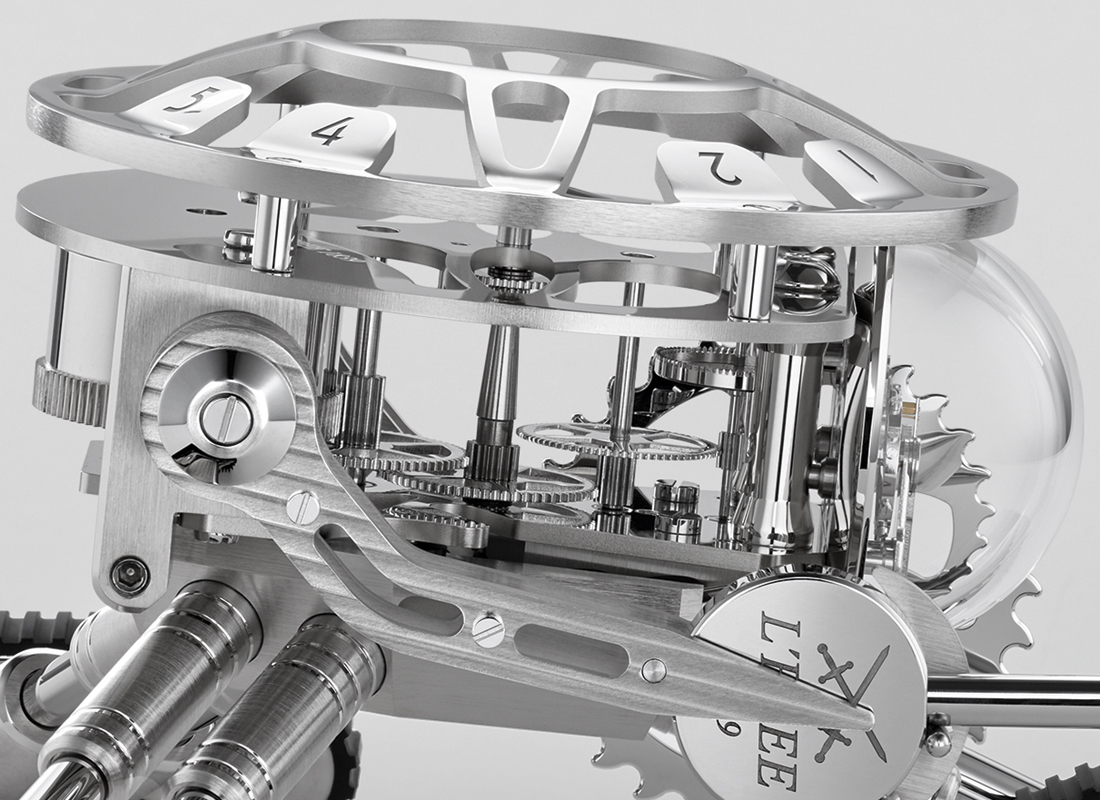 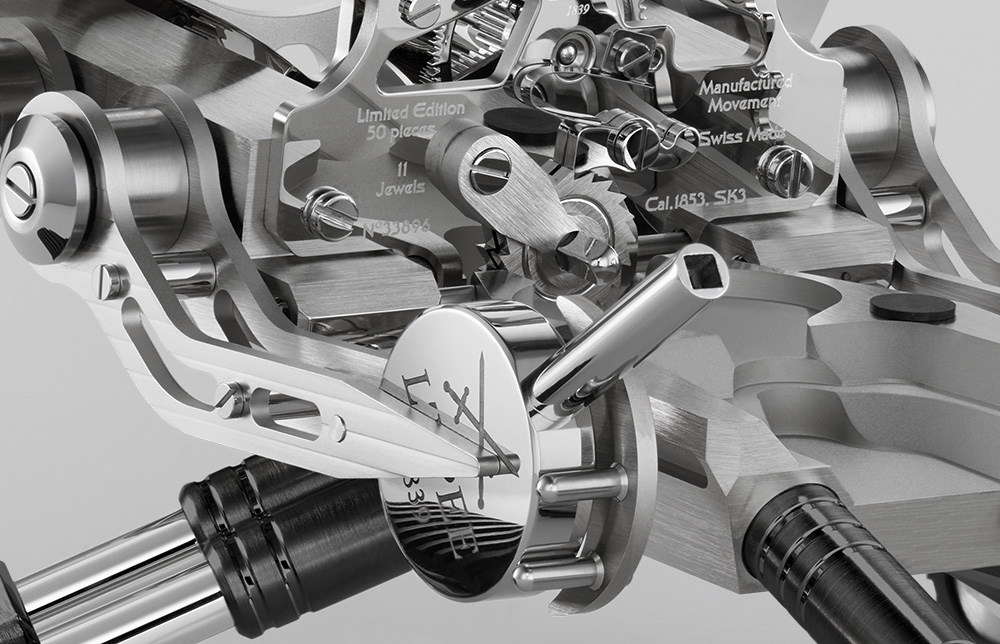 L’Epée developed the MB&F Grant around its own in-line manufacture movement with eight days of power reserve. Again, you can see many similarities to the MB&F Sherman. Under a tall mineral glass dome corresponding to the robot’s brain is the balance and escapement, and I like MB&F’s suggestion that watching its oscillation (2.5Hz) is like seeing the robot “thinking.” While standard in wristwatches, the inclusion here of an Incabloc shock protection system is unusual for clocks, but reassuring for such an expensive toy and also appropriate for its battle-ready theme. The right “hand” or “grenade launcher” comes out to function as the key for winding the movement and setting the time. 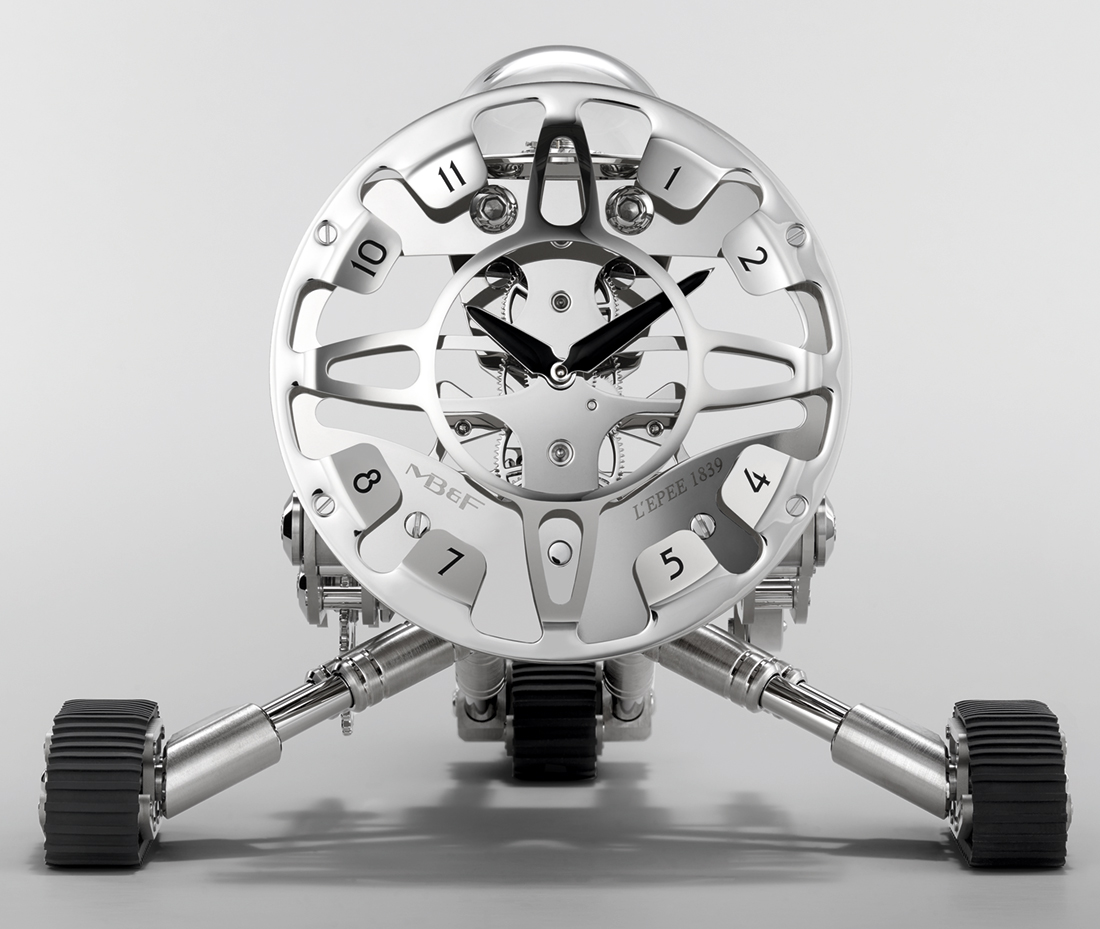 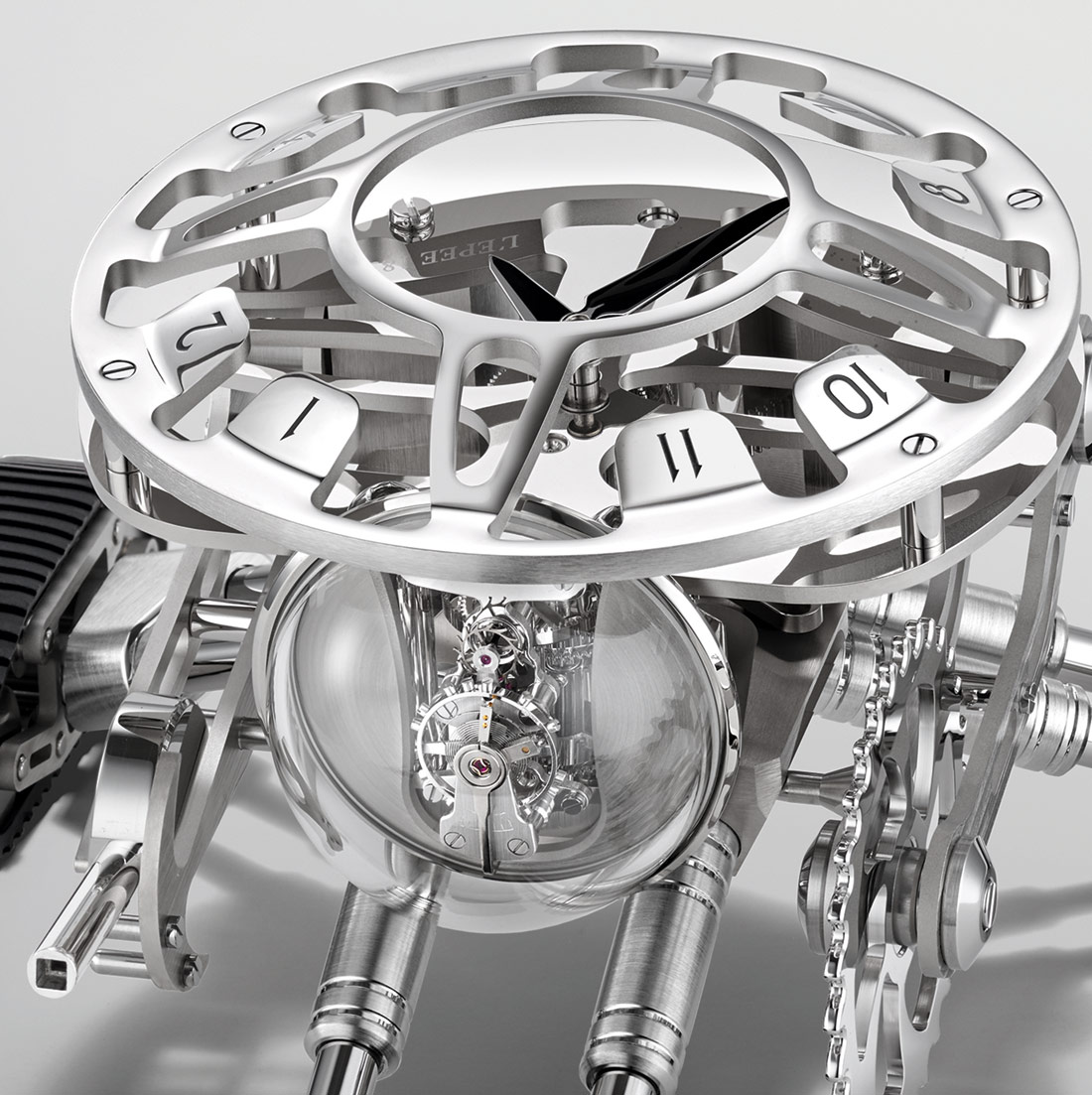 One could almost forget about the dial, which MB&F also calls the robot’s “shield,” and time-telling with so much else going on. Actually, I really like the dial design and think it would even be cool to see it on an MB&F wristwatch, particularly if the hands were above the frame that doubles as the hour markers. With the movement itself comprising only 155 (with 11 jewels) of the total 268 for the entire assembly, it is clear that the body with its many moving parts is almost half the complexity. It is all open and on display, so I hope MB&F provides some sort of glass cover to protect it from dust and moisture. 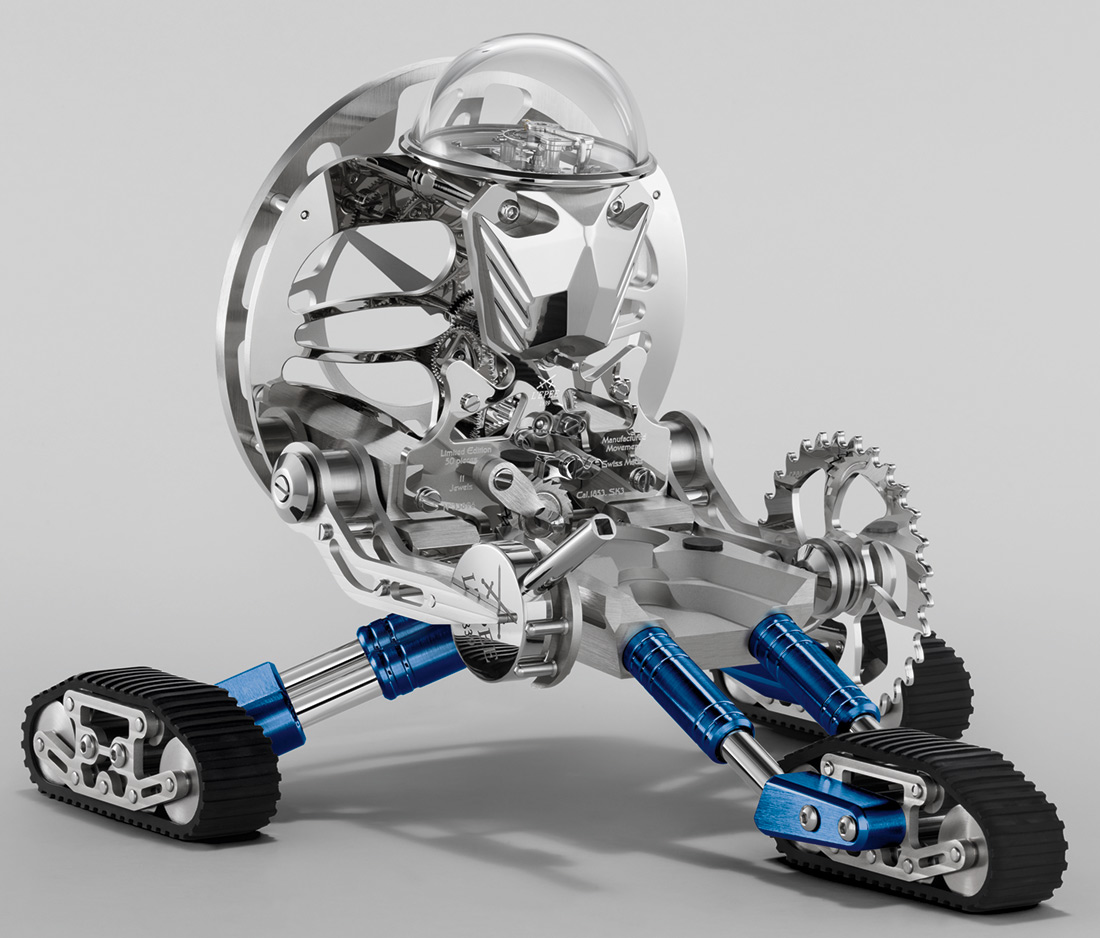 Despite its robotic form, the only actually automated parts of the MB&F Grant are for telling the time – so naturally, it is up to the owner to pose it, roll it around their desk, and make little pew-pew and explosion noises. In the end, like so many of MB&F’s creations, this is to be appreciated on different levels for its art and mechanics, interacted with as a toy – and maybe even used to tell the time. In limited editions of 50 in each color of Nickel, Black, or Blue, the L’Epée + MB&F Grant will have a price of 22,200 CHF. mbandf.com