For Baselworld 2016, MB&F have partnered with Black Badger to create a limited run of both their HMX watch and their Starfleet Machine clock. Black Badger is a small but radiant company run by one James Thompson that manufactures a high-performance solid luminous compound that can be milled into any shape and exhibits a powerful and lasting glow. MB&F has long focused on collaborative efforts, and this new Black Badger series is a wonderfully nerdy and eye-catching way to blend Thompson’s remarkable skills and MB&F’s wild designs. 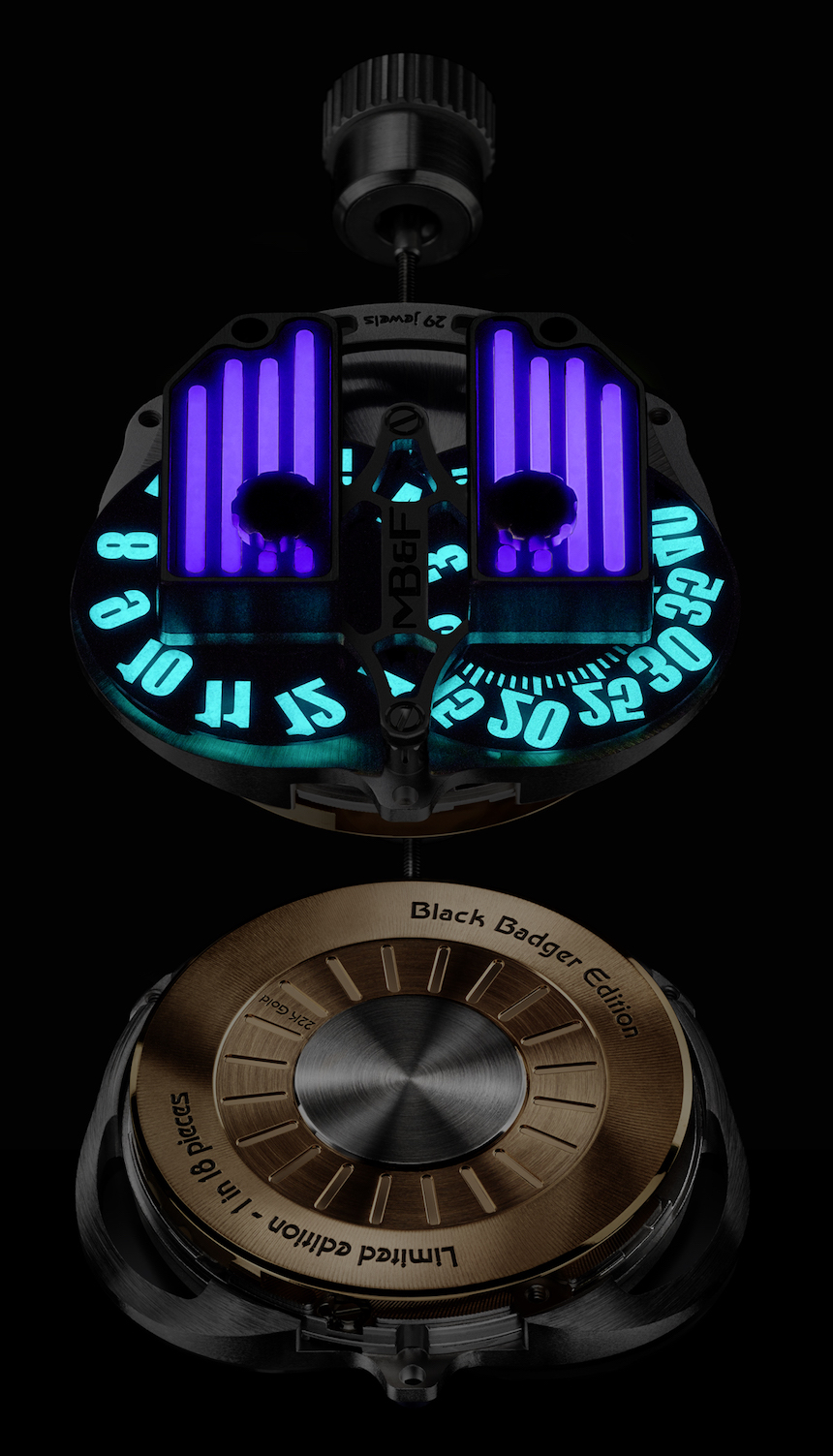 Launched in 2015 to commemorate MB&F’s 10th anniversary, no doubt many of you will remember the HMX. Featuring a form similar to that of the HM5, the HMX offered a lower price point into the MB&F world. The design uses a bidirectional jumping hour display and trailing minutes that are placed on a horizontal plane and then displayed on a gauge-like opening on the side of the case using sapphire prisms. The “top” of the watch (where we would normally find a dial) features an open sapphire display that allows enough light into the case for the sapphire prisms to do their job. 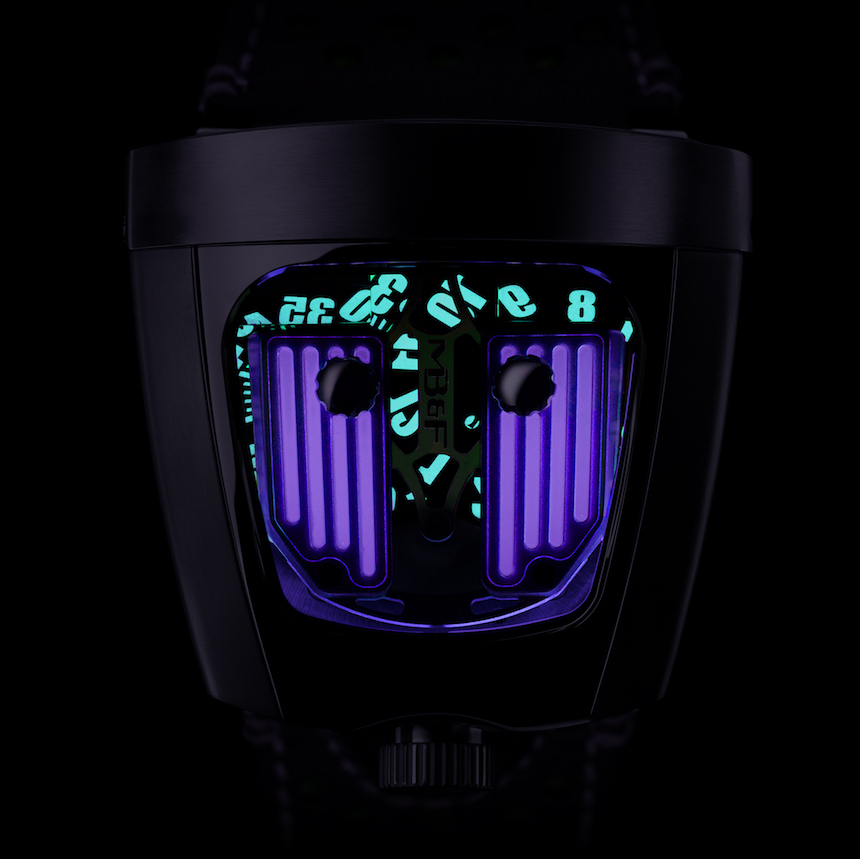 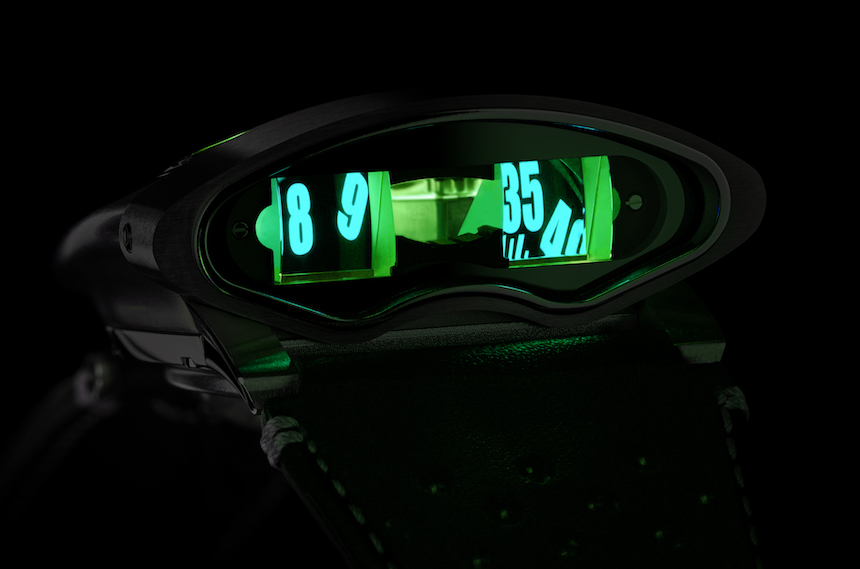 The entire design is automotive derived, and there are even two “rocker covers” – complete screwed caps for oil reservoirs that store lubricant for the bearings of the main display. As the top of the watch looks much like the glass engine cover on a supercar, these tiny caps look a lot like oil filler caps on an engine. Furthermore, the rocker covers, with their tiny screwed caps do, charmingly enough, look like actual rocker covers. The automatic movement below those rocker covers is based on a Sellita gear train and beats at 4Hz with a power reserve of 42 hours. Total case size is 46.8mm lug to lug, 44.3mm wide, and 20.7mm thick (the case is curved at the sides, rising to its full height at its center). 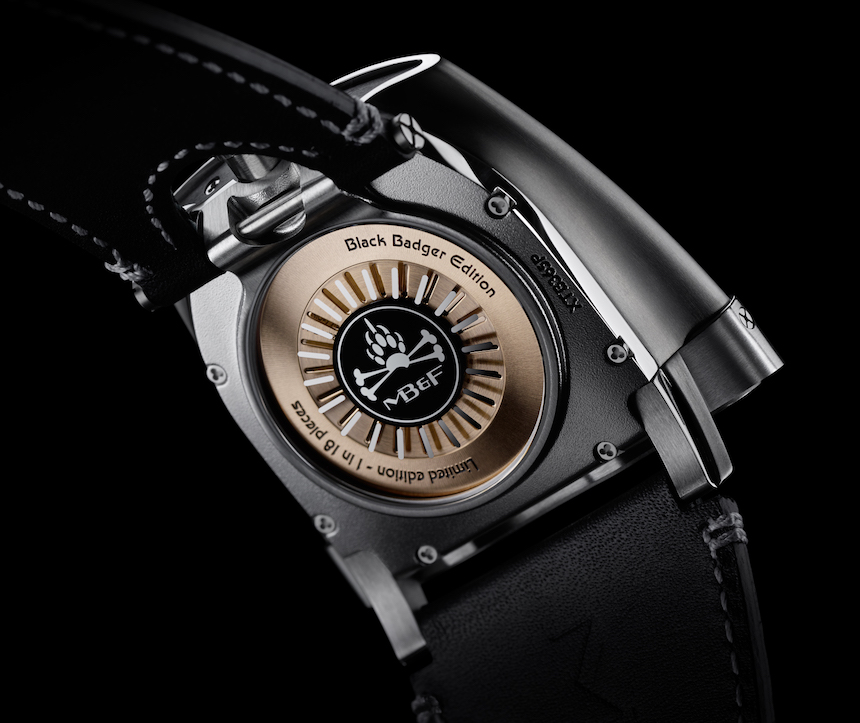 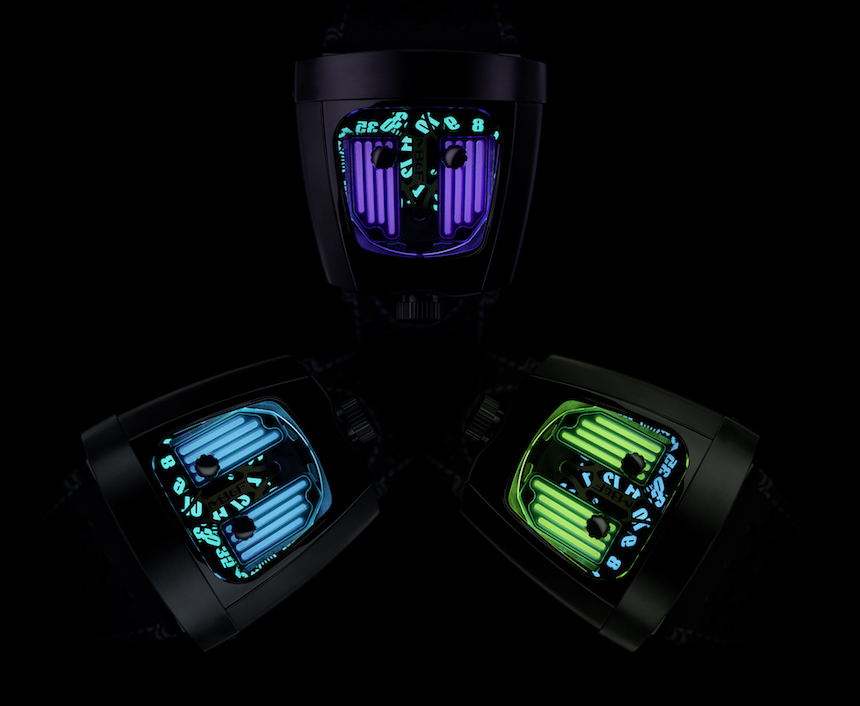 For the Black Badger editions, the MB&F HMX functionality remains the same but the glow grows tenfold. Available in three colors, the titanium and steel MB&F HMX Black Badger features a cool blue fully luminous time display and Black Badger luminous inserts on the “rocker panels.” Looking like glowing fuel cells, the color options include “Radar Green,” “Phantom Blue,” and “Purple Reign.” For those of you with a short memory, this is not the first time that Black Badger has developed luminous elements for watches, with past projects including the Schofield Blacklamp Carbon and the Sarpaneva Korona K0 Northern Lights series – which was announced at Baselworld last year. 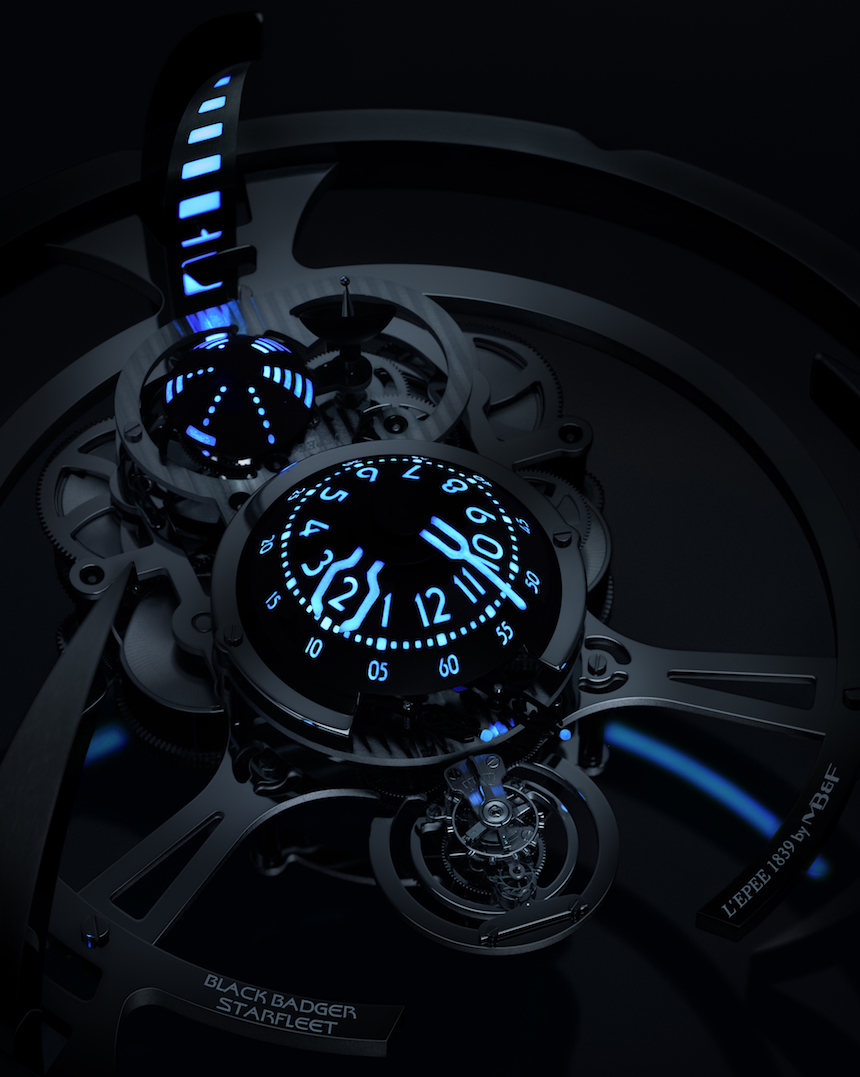 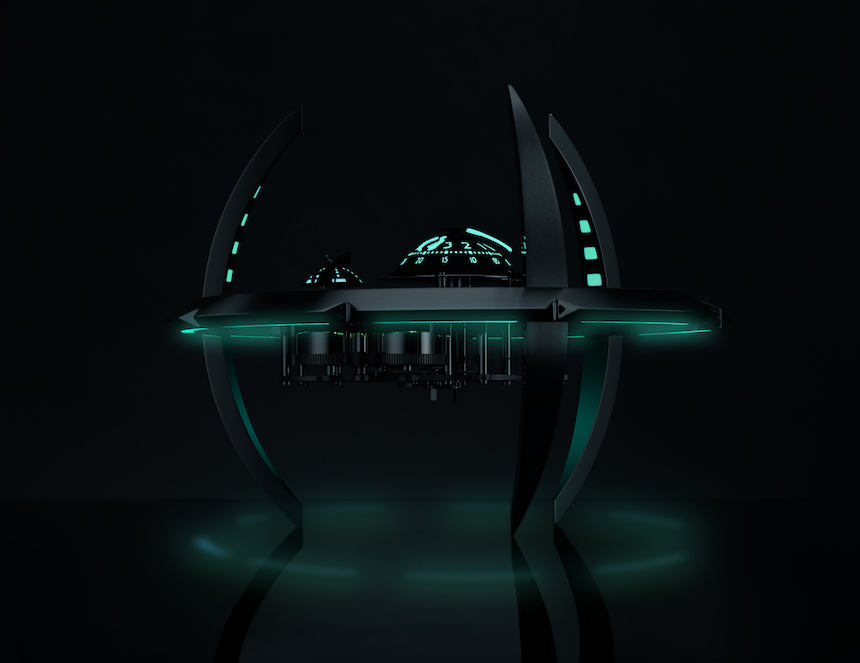 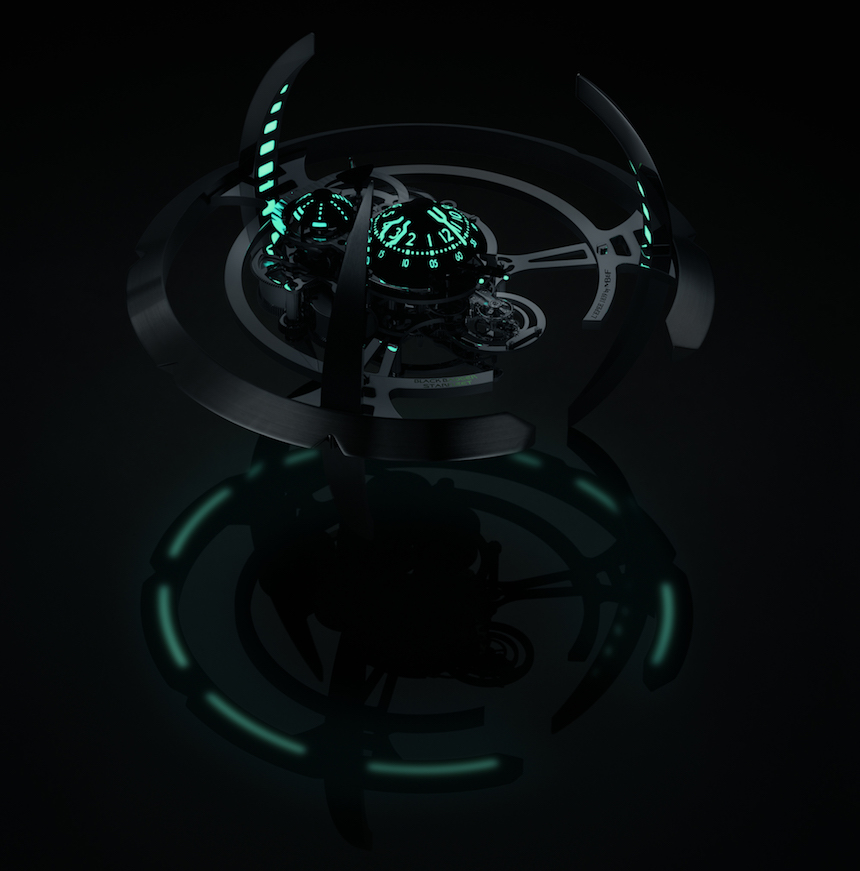 While we will report back with more thoughts once we’ve seen the MB&F HMX Watch & StarFleet Machine Black Badger editions in person, judging by the photos, they look awfully cool. If these glowing marvels don’t at least bring a smile to your face, then start working on your will, because you’re dead inside. As we at ABTW are nothing if not child-like fans of all things glow-in-the-dark, we are naturally big fans of Black Badger and his glowing work. 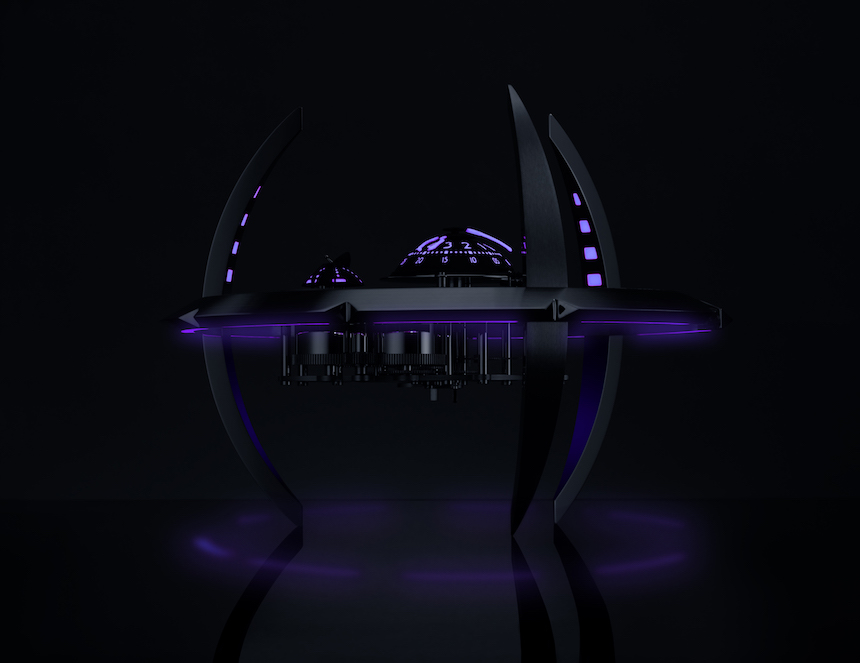