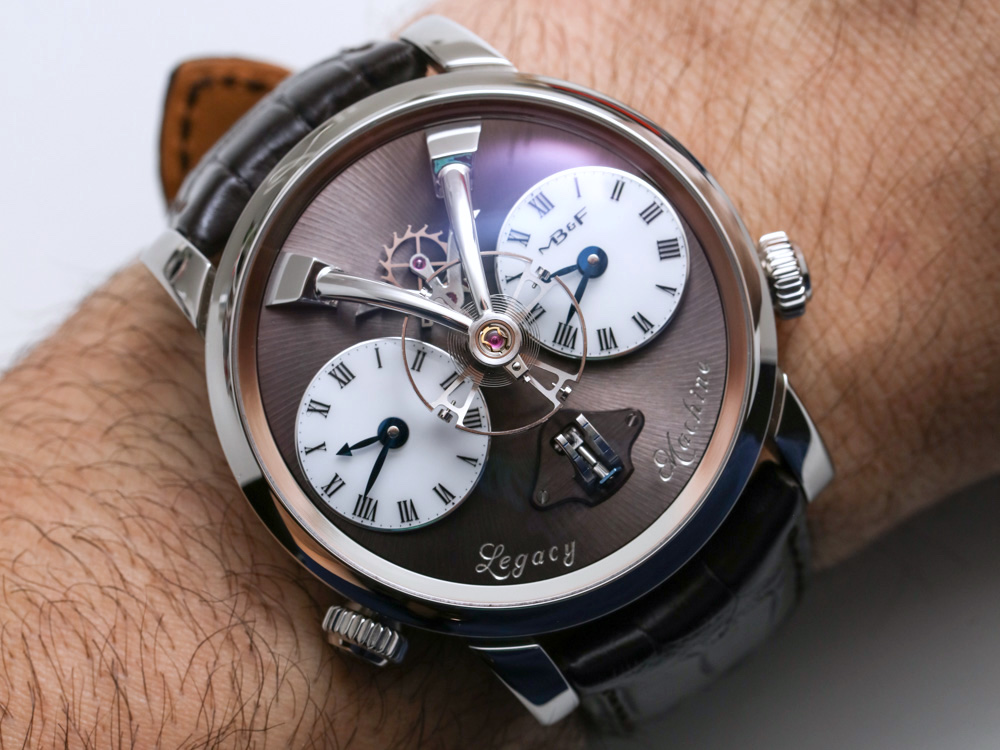 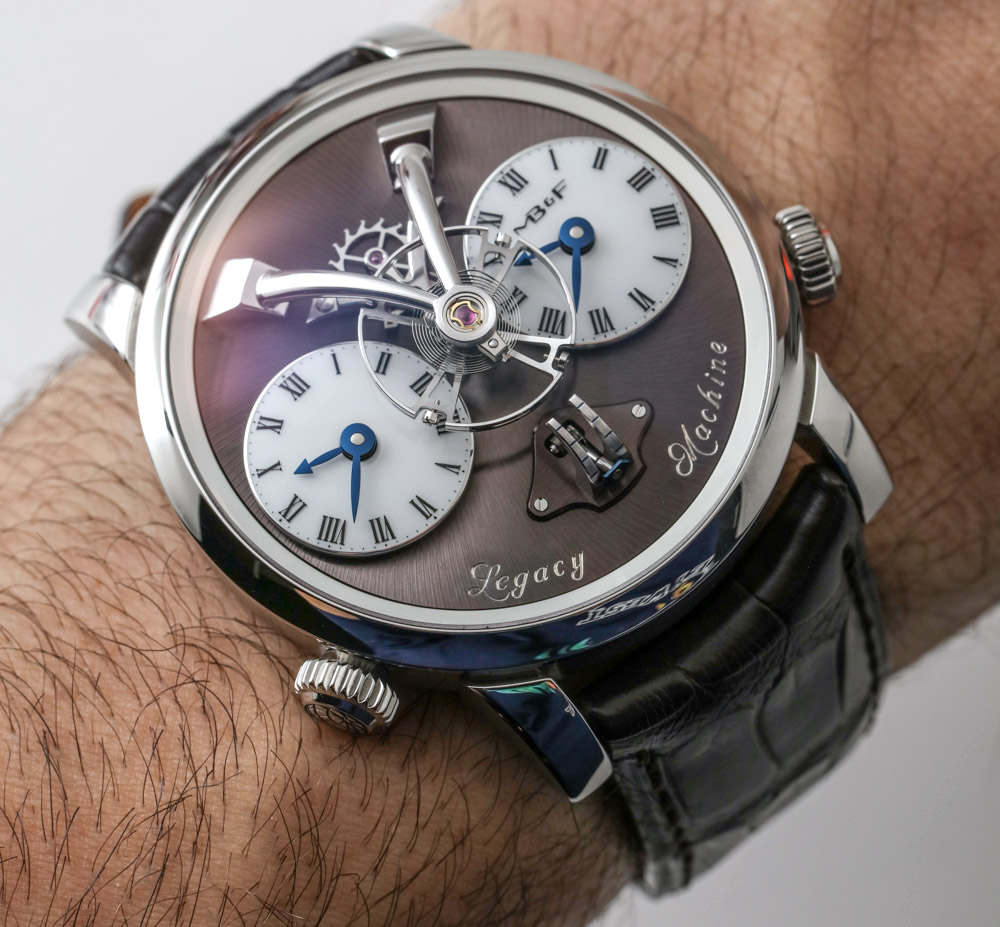 MB&F will close the chapter on the Legacy Machine No. 1 watch with the 2017 MB&F LM1 Final Edition. This “last of the collection” limited-edition LM1 will be offered with a “chocolate brown” dial matched to a steel case. This is the first time the MB&F Legacy Machine 1 watch has been offered in steel.

It feels like a long time ago that MB&F introduced the then rather disruptive LM1 watch (here in 2011). That year marked a major shift for the brand as they transitioned from being exclusively about “Horological Machine” watches set in modern times to also including “Legacy Machine” watches inspired by more classic themes. Since then, MB&F has also diversified by including many clocks into their product portfolio, as well more generally the MB&F MAD Gallery stores now open in at least three cities around the world. 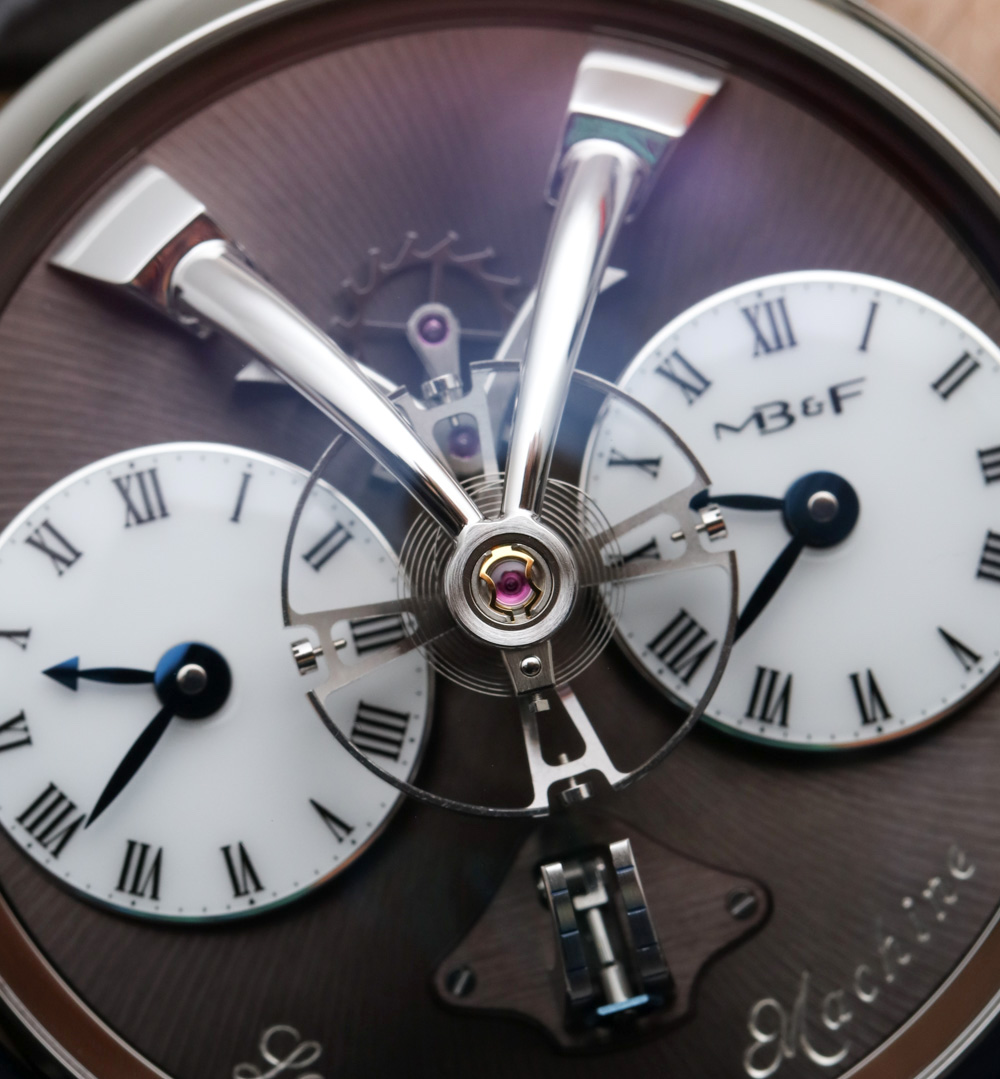 While the MB&F LM1 watch was controversial when it was released, for many people it was “the first MB&F I want to wear.” This makes sense since the MB&F LM1, with its elegant dial and round case, was actually the most traditional MB&F ever made. It allowed people who respected the brand for their quality and personality to enjoy something that matched a more traditional watch taste profile a bit better. Thus, while the MB&F Legacy Machine collection forever changed the way people saw the MB&F brand, the undeniable attractiveness of the product helped overcome most concerns about what it meant for the future of MB&F. 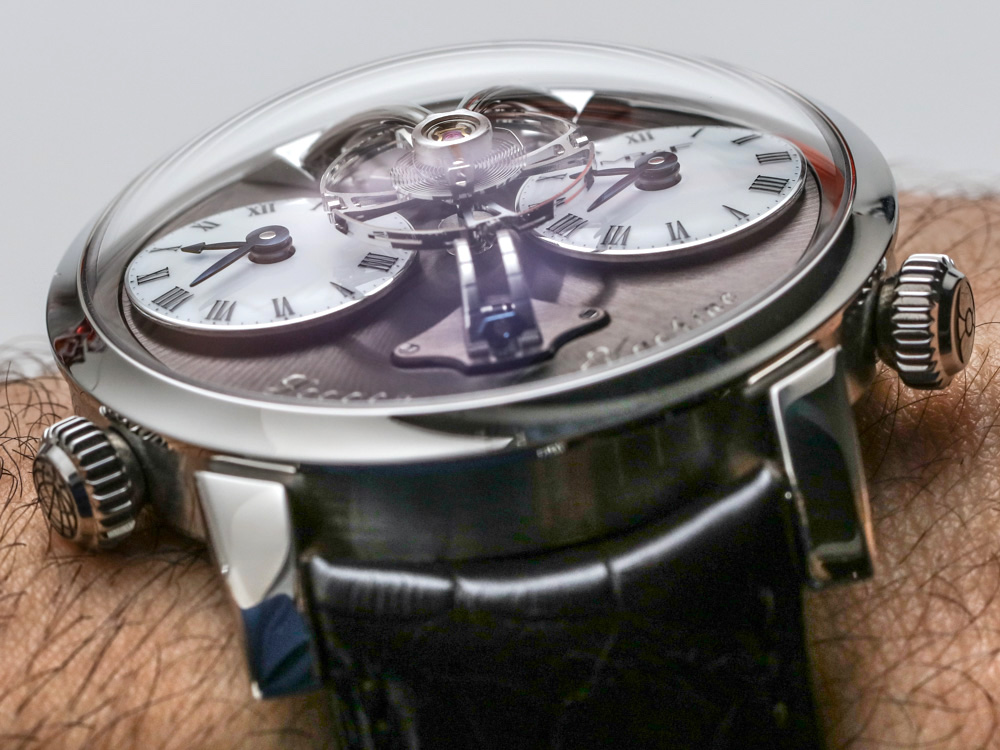 MB&F founder Max Busser always characterized the LM1 as a thought experiment of what he would have designed a Horological Machine watch to look like if he had been born about 100 years earlier. The MB&F LM1 opened up into a few watches including the smaller and less expensive MB&F LM1.1 and the more expensive and exotic MB&F LM2. For many people, the MB&F LM1 was still the ideal model with its straightforward and attractive movement, symmetrical dial layout, and 44mm-wide case size. 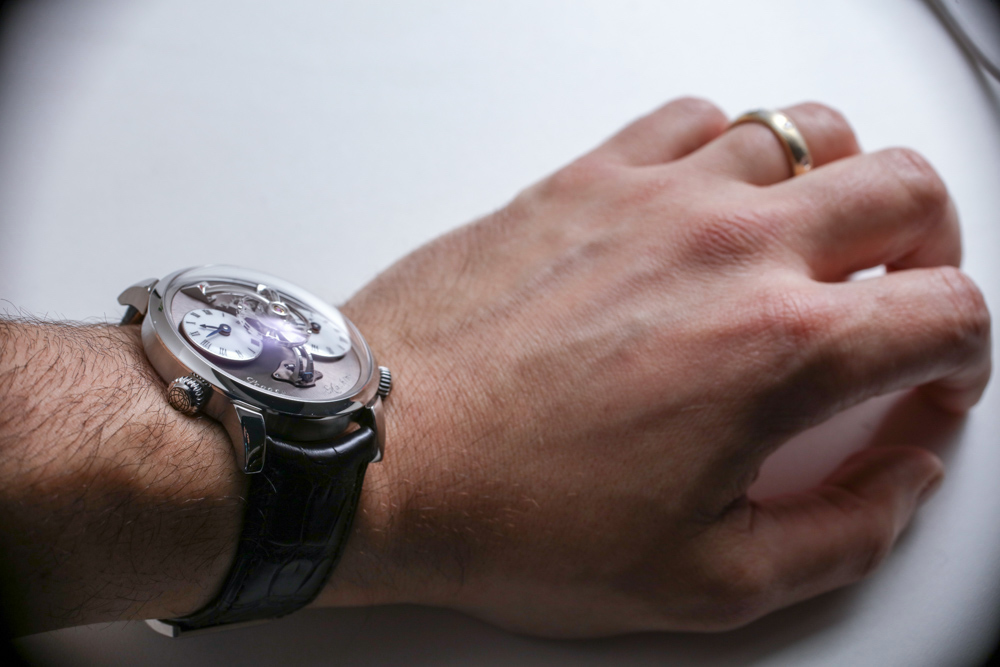 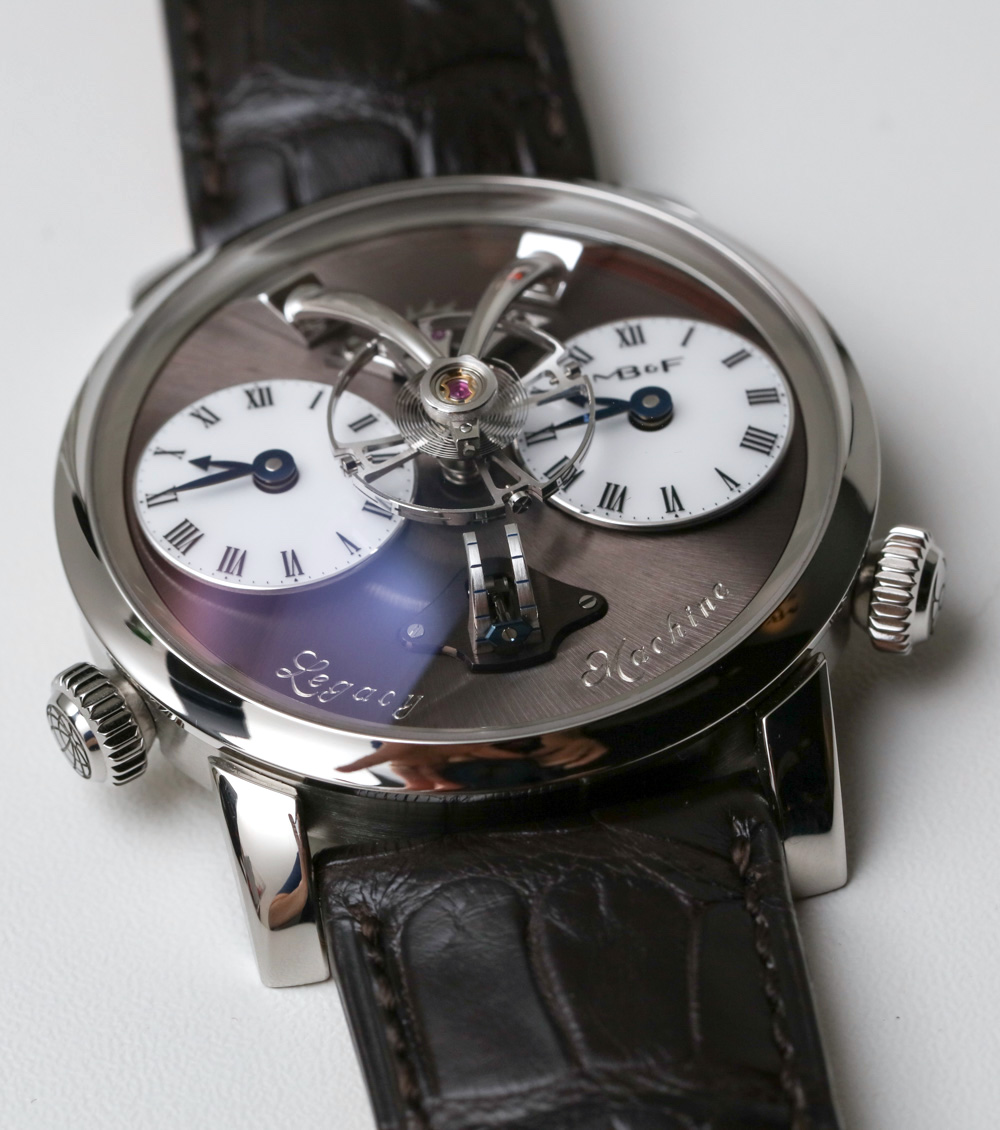 In steel, the MB&F LM1 doesn’t feel out of place. While titanium models exist, most MB&F watches are produced from precious metals, which is the case with most previous Legacy Machine 1 watches. Steel is a preferred metal by collectors for its durability and non-pretentious nature. MB&F has hinted (for now) that it will consider using steel as the material for future “final edition” watches. 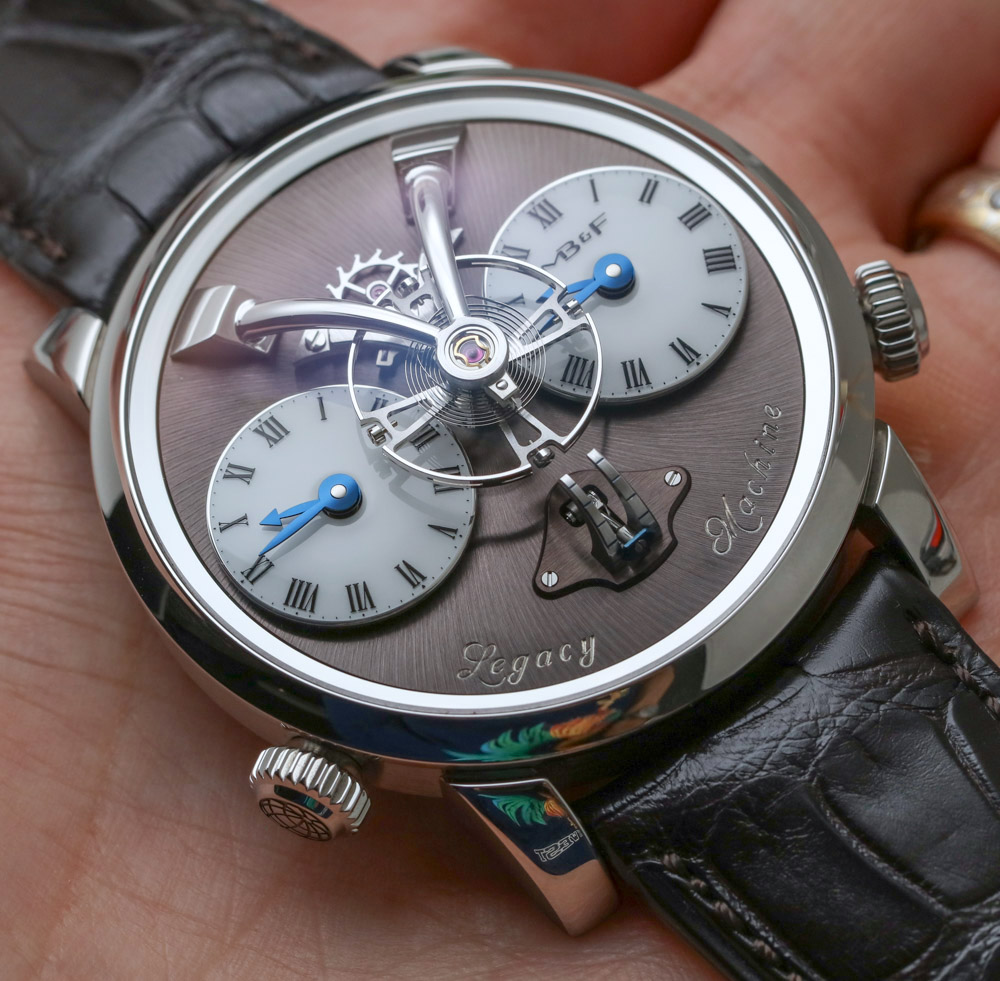 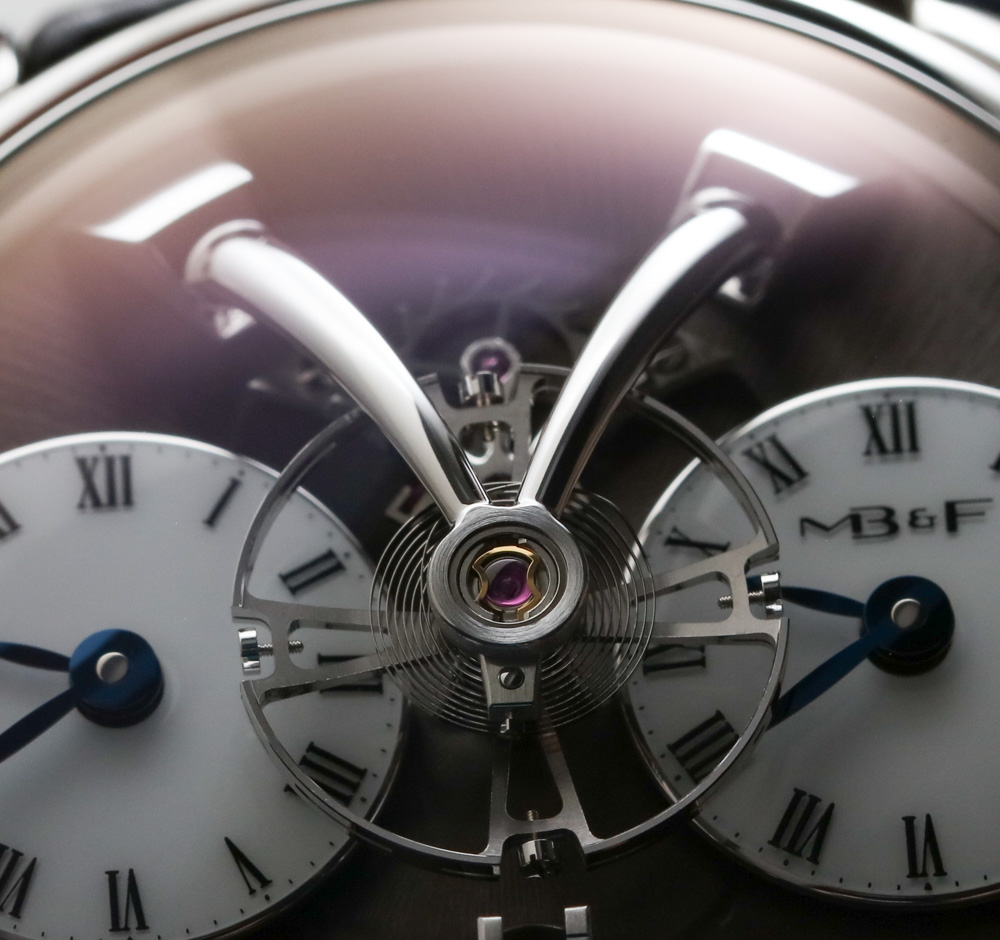 What is a “final edition?” MB&F has two types of products – those which are strict limited editions and those which are not – but still produced in limited quantities. When the MB&F LM1 was originally introduced, it was part of the core MB&F collection, which means that the brand could ostensibly produce as many as they like without stopping production. Though, given the brand’s production limit of roughly 300 watches per year, there are only so many timepieces they have the bandwidth to produce. A Final Edition is a final set of watches produced by MB&F when they are totally ceasing production of a particular model. About six years after the original introduction of the MB&F Legacy Machine 1 watch, MB&F said that they produced “about” 435 LM1 watches in total. That includes a few limited-edition models, along with a few non-limited versions. Thus, the total production of all MB&F LM1 watches – even with the limited Final Edition LM1 taken into consideration – will only be about 450 pieces total. 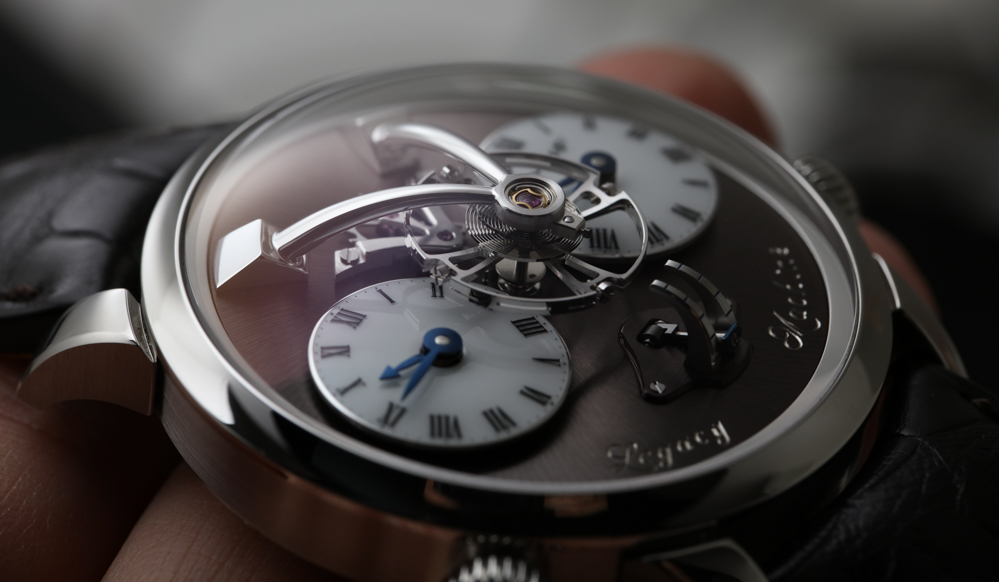 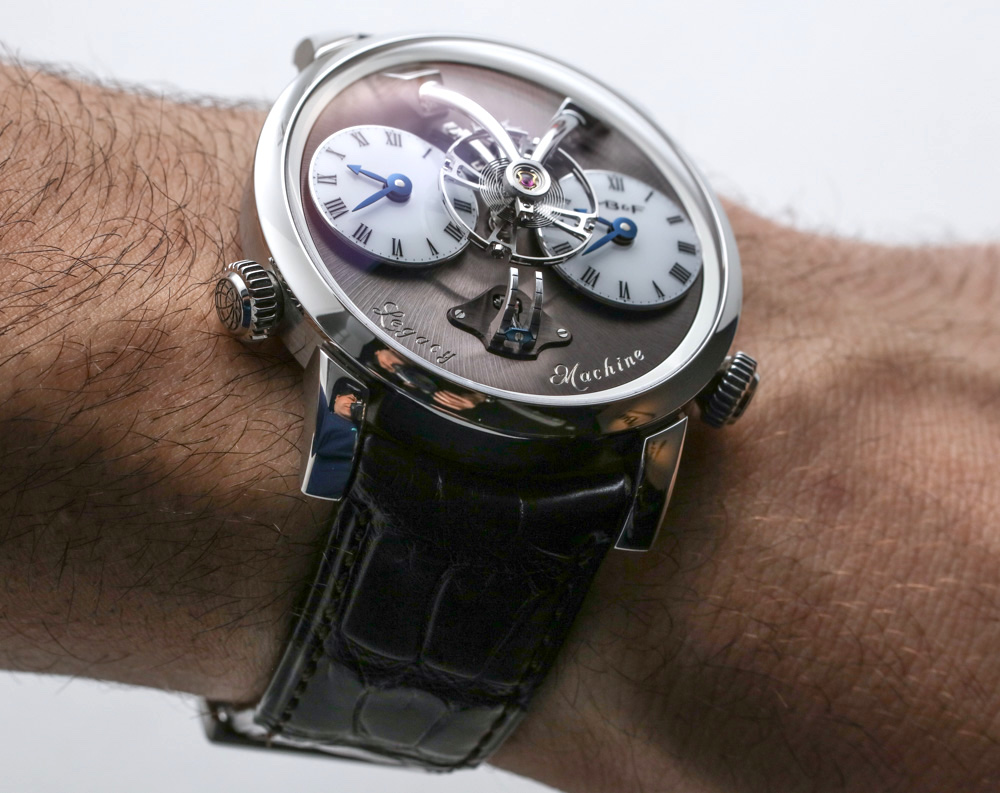 The MB&F Legacy Machine No. 1 Final Edition will be limited to 18 pieces and is, by my account, a very attractive watch. It is certainly more subtle than other LM watches with eye-catching blue dials or other interesting colors. Rather, the LM1 goes out in a trendy bang with a piece meant to go with earth-tone suits and other attire. It sends the message that the MB&F LM1 is the fashionista of the MB&F family, and even in a household mostly interested with planes, cars, and science fiction, there is room for style and grace. 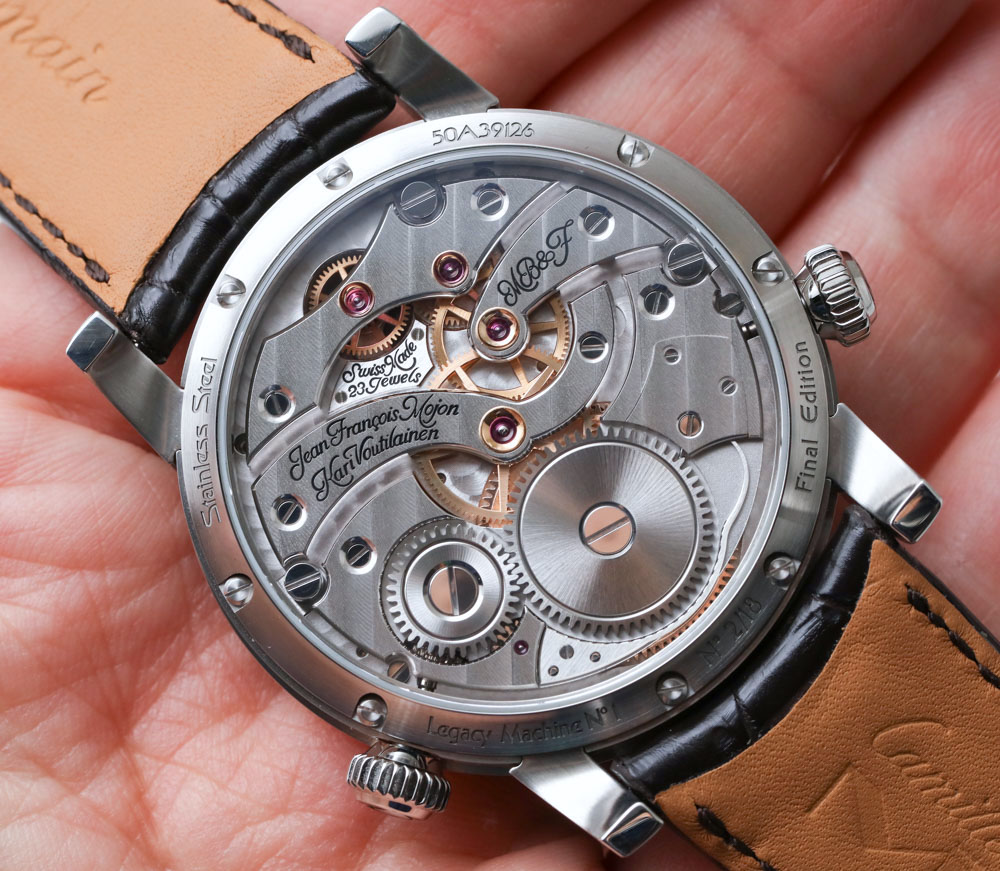 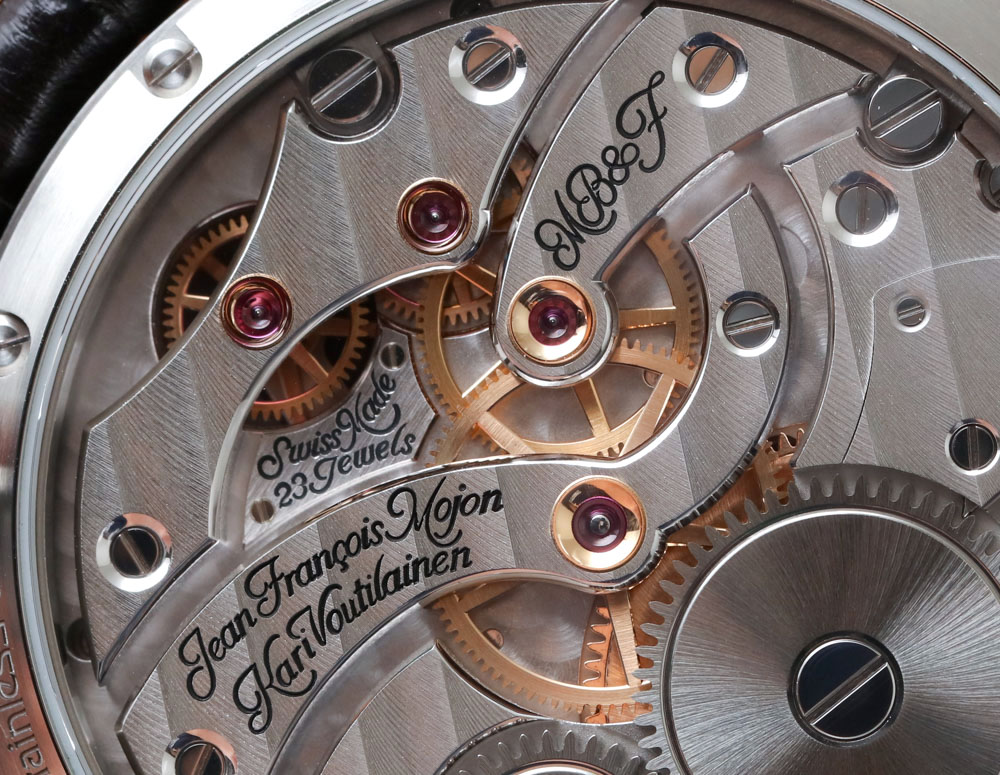 The LM1 case, once again, is 44mm wide by 16mm thick (due to the dramatically domed sapphire crystal). It wears very comfortably and contains an extremely sexy manually wound mechanical movement produced exclusively for MB&F. The movement is finished in the workshops of Kari Voutilainen and was originally designed by Jean-Francois Mojon. The movement is produced from 279 parts, and operates at 2.5Hz (18,000bph) with a power reserve of 45 hours. The relatively slow balance wheel frequency was intentional so that the user can better view the regulation organ’s animation through the dial, as the balance wheel is prominently displayed sitting on a bridge over the face. 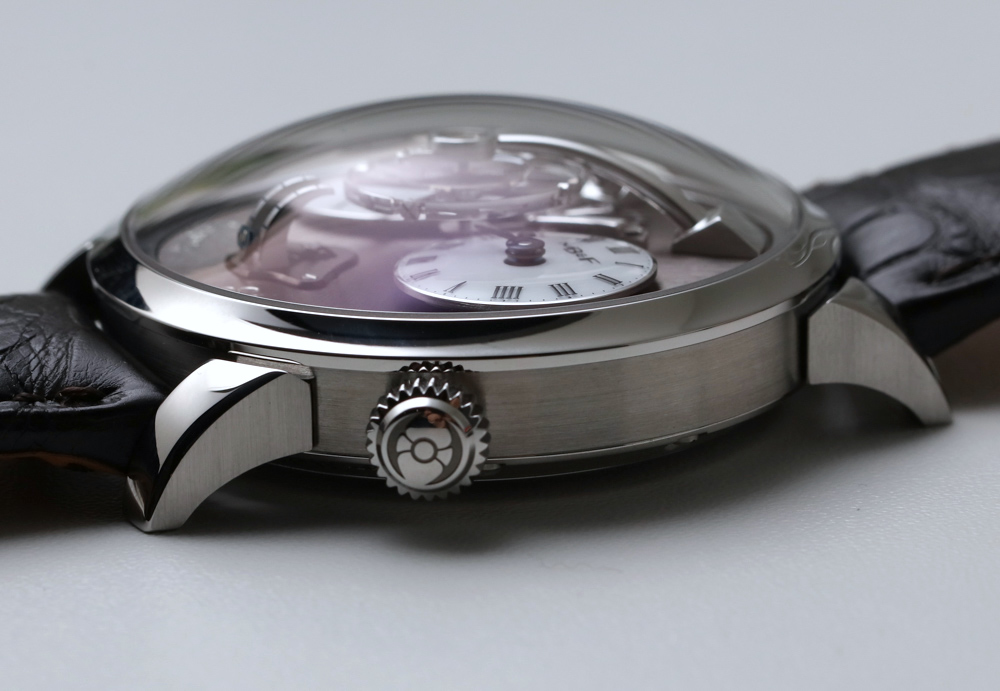 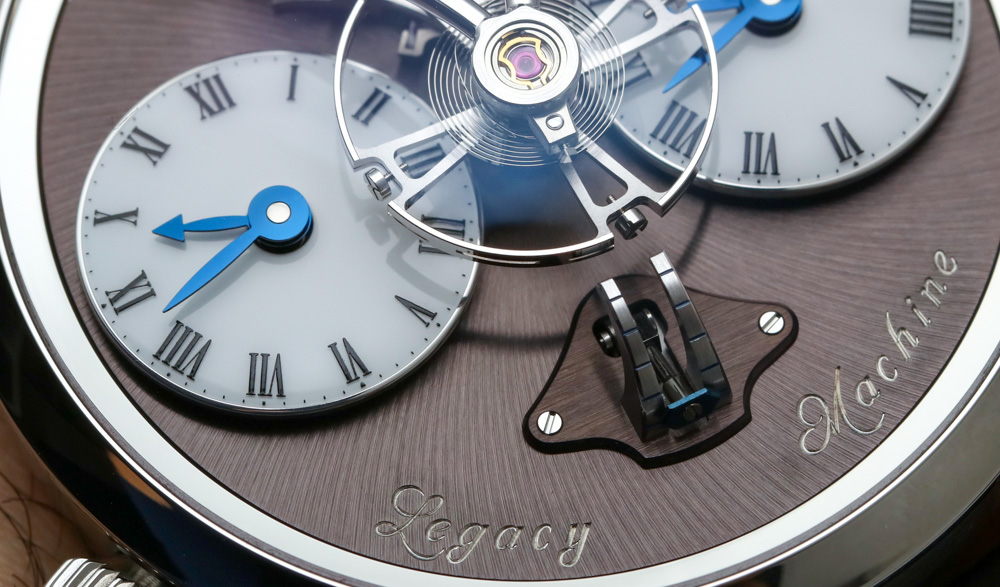 One of my all-time favorite features of the MB&F LM1 is the “vertical” linear power reserve indicator. Rather than a traditional hand on a dial, a small arm moves up and down vertically over the face as the power reserve indicator. Time is told via two dials. Each is more or less independent and can be set to the minute as you like with one of two dedicated crowns located on either side of the case. It makes for a very handy two-time-zone timepiece. 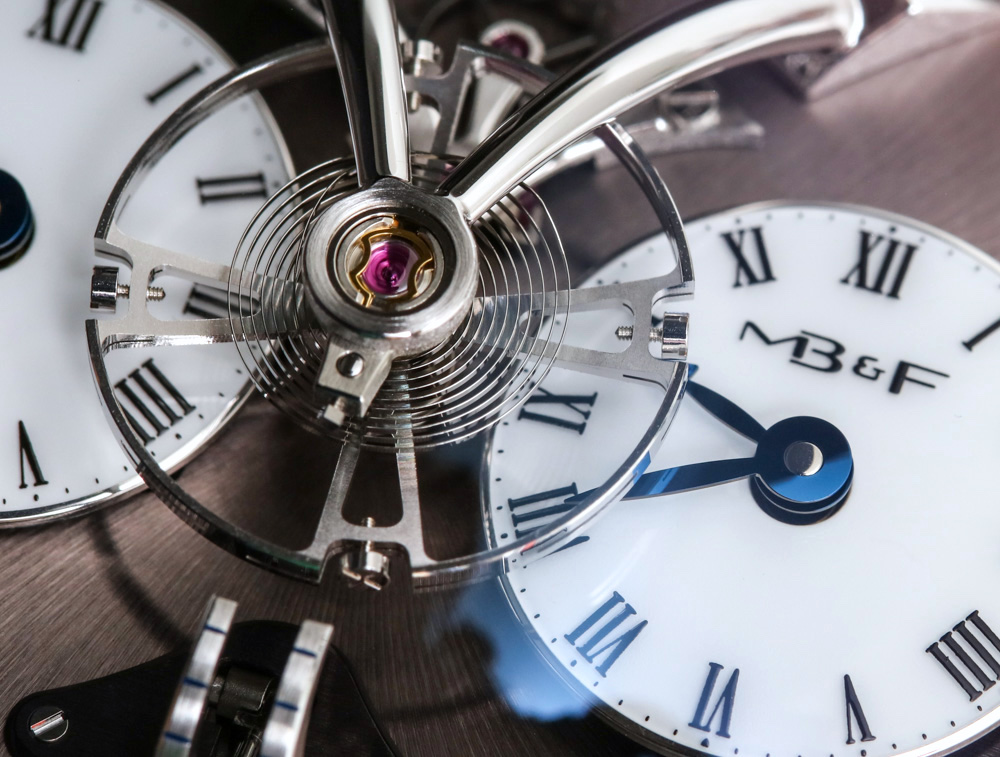 The blued steel hands on the legible white lacquer dials complement the metallic brown dial well. The brown alligator strap completes the brown color theme nicely. One new design element for the LM1 on the MB&F LM1 Final Edition is the design of the robust dual-armed bridge that holds the balance wheel. The design of the bridge arms is changed, with each bearing a fully polished and rounded arm, versus something bit more modern and architectural as found in earlier LM1 watches. This particular bridge design isn’t new, however, to MB&F (just the LM1 collection) and can be seen in some LM2 and LM1.1 watches. It just helps the MB&F LM1 Final Edition look as classy as possible. 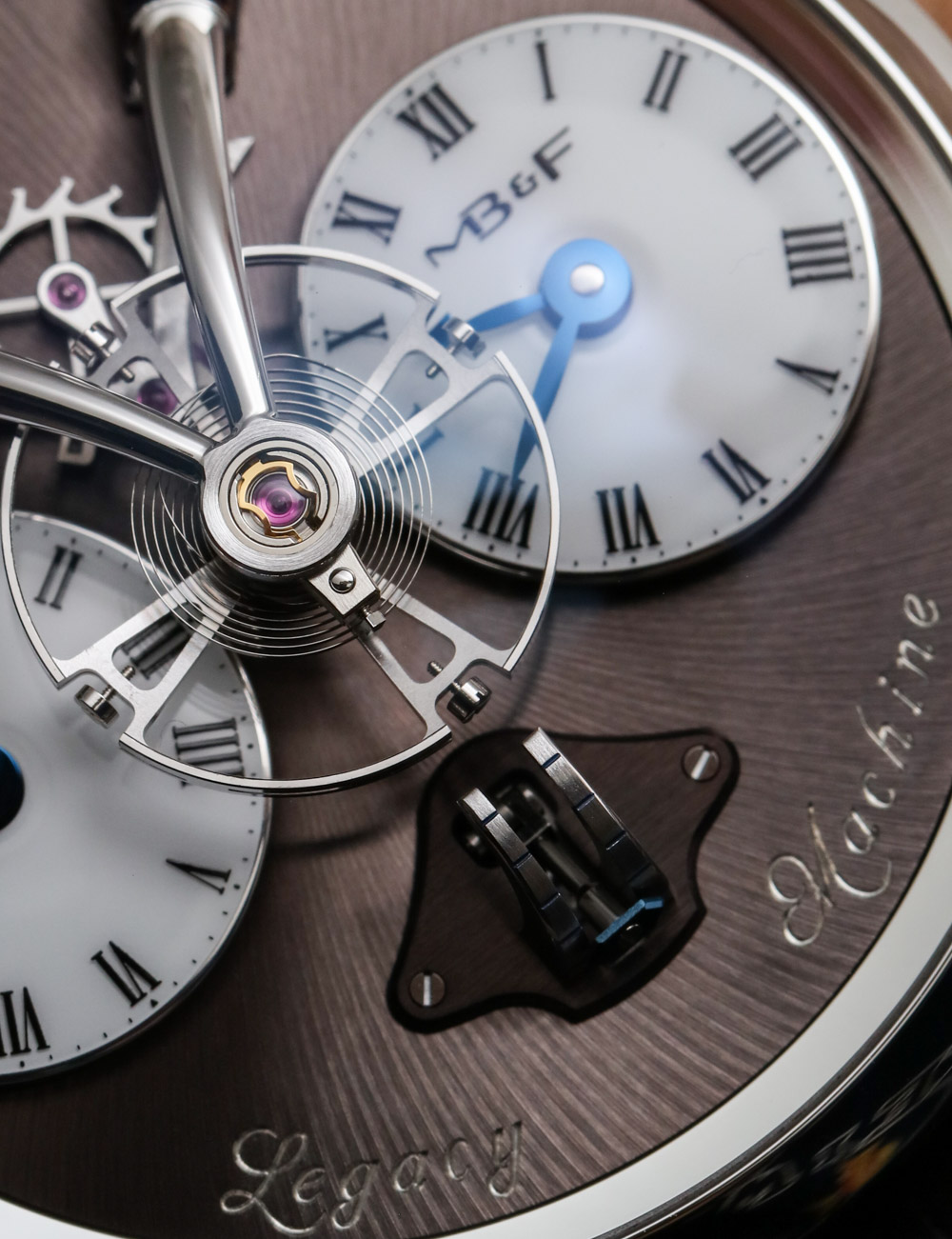