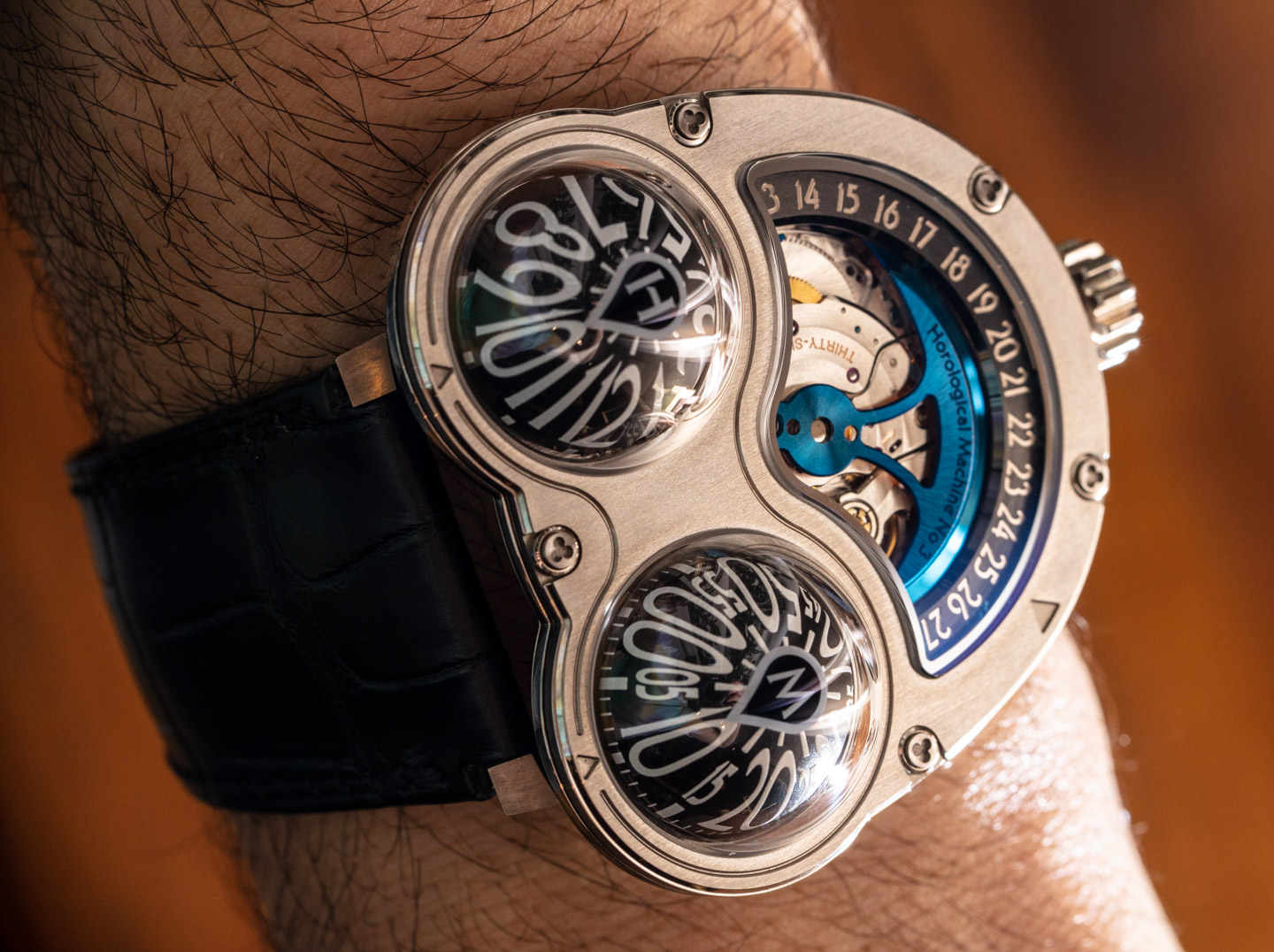 MB&F HM3 Frog Watch In Titanium: The Last New One Available For Sale 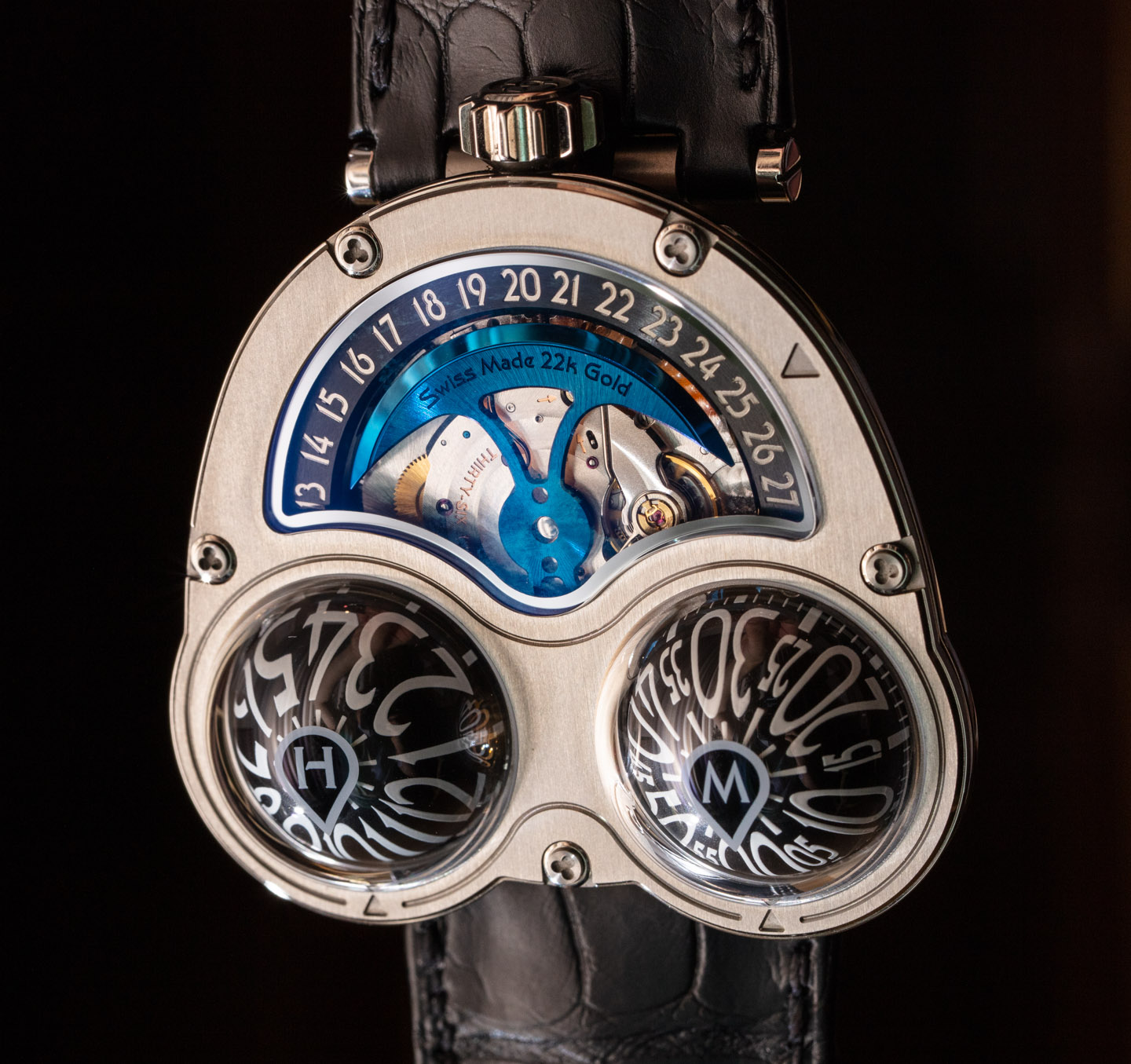 Imaginative Geneva-based watchmaker MB&F continues its inspired approach to selling watches directly online — with the last new HM3 Frog watch now available for purchase. MB&F’s wristwatch e-commerce concept is not like those of most other Swiss luxury watch brands. As part of the MB&F MAD Gallery store, a small selection of MB&F products will be for sale at any given time, including both brand-new and pre-owned watches. MB&F primarily sells its watches through a network of high-quality international dealers. Even though this particular MB&F HM3 Frog is for sale via the MB&F store, the watch is made available through MB&F authorized dealer Westime in Los Angeles, California.

The Horological Machine Number 3 (HM3) Ti (Titanium) originally debuted in 2010 as a limited edition of just 20 pieces in natural titanium, and 12 pieces with a black-coated titanium case. The watches were part of the larger HM3 collection, which, to this day, continues to be MB&F’s most successful Horological Machine series. MB&F founder Max Busser felt that this was because the HM3 series offered MB&F fans one of the most distinctive wrist wearing experiences at the time. Now 10 years later, the HM3 Frog remains just as original in form no matter if it is on or off the wrist. MB&F ceased production of the Horological Machine 3 watch series in 2015 with the HM3 MegaWind Final Edition. 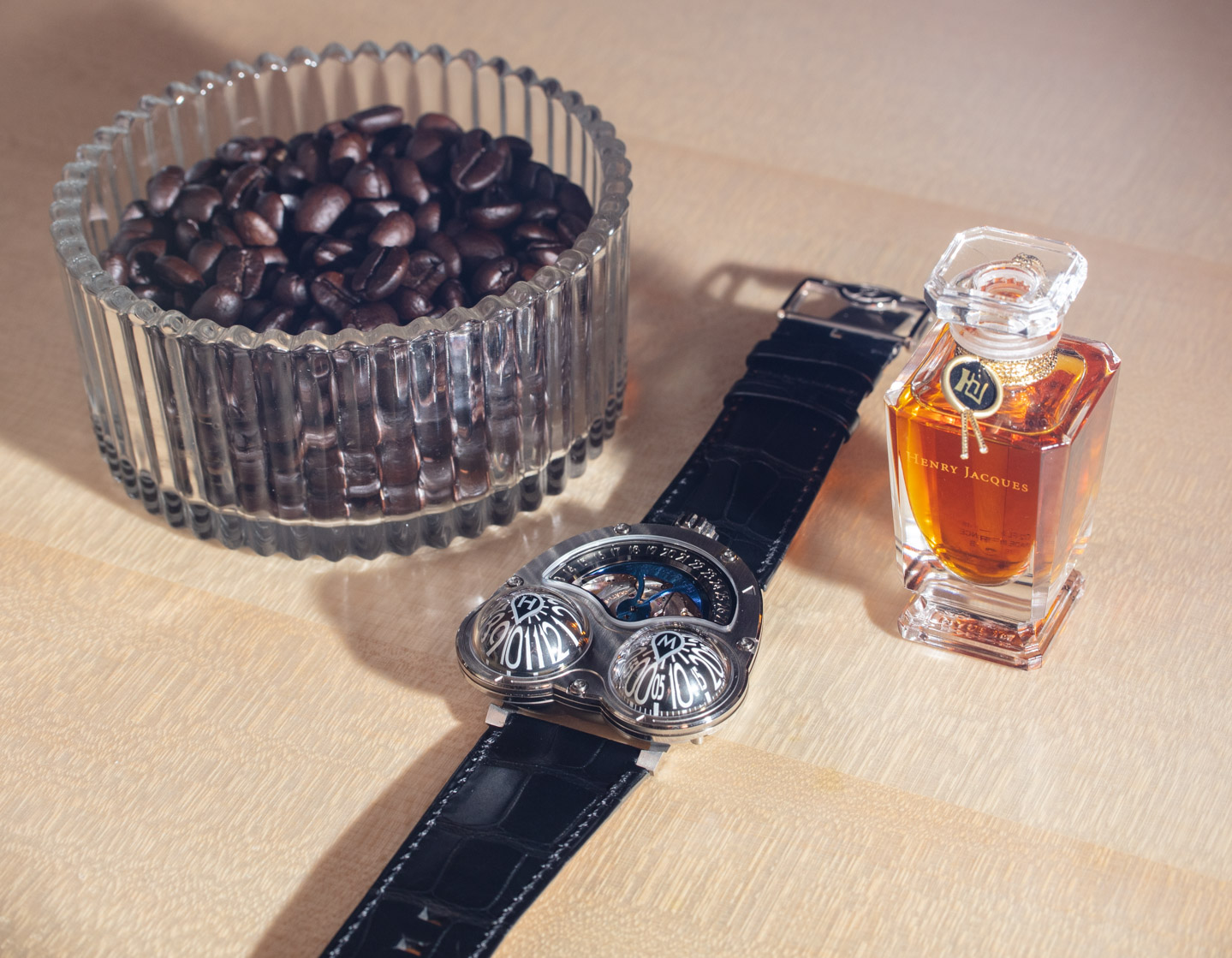 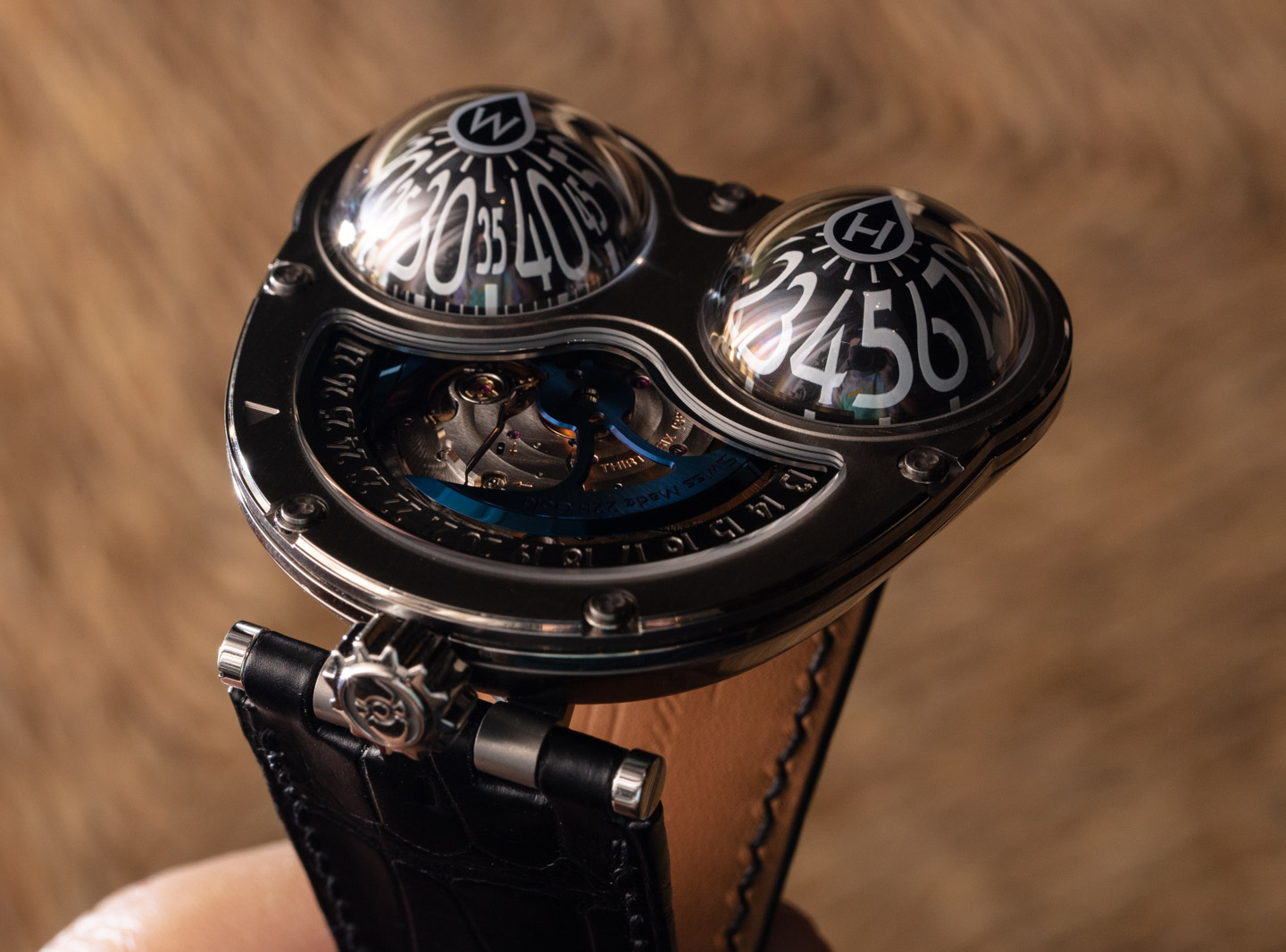 The HM3 watch is typified by two dome-style displays used to indicate the time, with the hours and minutes split between them. The HM3 Frog was a later evolution on the original HM3, which recast the more geometric time-indicator “towers” into entirely sapphire crystal domes. These domes not only appeared akin to an amphibian frog’s eyes at they peer out of water in a pond, but they also presented a more expansive ability to view the time from more angles (further adding to legibility). An open window above the section with the “eyes” offers a display of the movement’s automatic rotor, as well as a date-indicating wheel.

No other MB&F watch has done a more adept job of displaying the brand’s “battle ax” logo, here represented as the shape of the automatic rotor. The HM3 Frog Ti in natural titanium uses a solid 22k-gold rotor (in the battle-ax shape) and chemically makes it blue for an impressive color effect. Other HM3 Frog watches rendered the battle-ax rotor in colors such as gold, green, and purple. Mounted on smooth ceramic ball bearings, the automatic rotor spins playfully with the natural motion of one’s wrist, while of course serving to wind the HM3’s bespoke-designed movement. 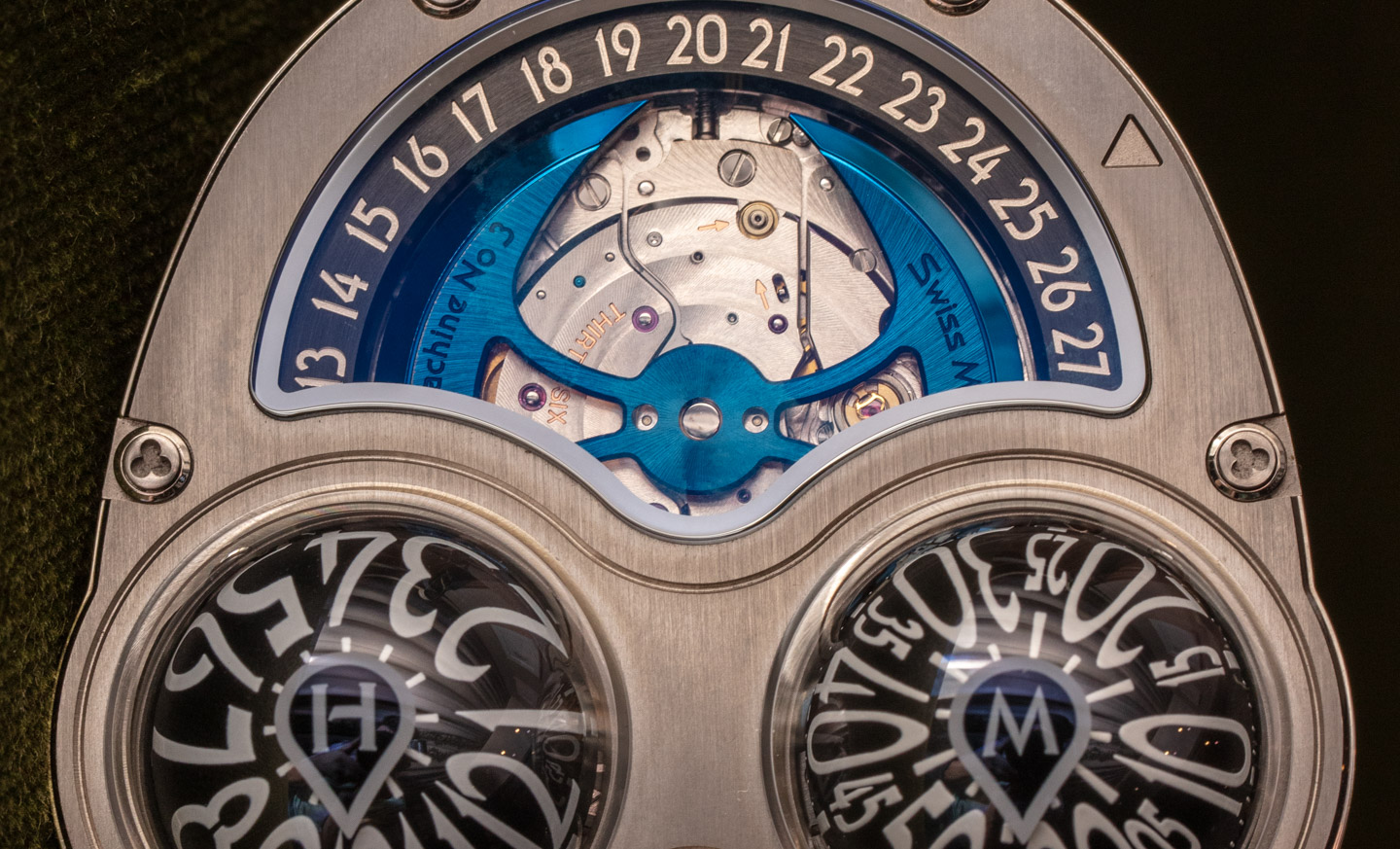 To engineer the unique movement designed for the HM3 and HM3 Frog collection, MB&F worked with master watch movement design firm Agenhor, also a Geneva local. Agenhor founder Jean-Marc Wiederrecht has a long history building such exotic mechanical movements for use in some of the world’s most prestigious watches across brands both mainstream and obscure. The HM3’s “engine” is comprised of 304 components and operates at 4Hz with about two days of power reserve. The base regulation system and running train are developed by Swiss Girard-Perregaux, which Aghenor then modified and built into the more elaborate system for the HM3’s full operation and display. A major feature of the watch is that the movement was designed to be upside down, with the automatic rotor on the top, versus the rear of the case. MB&F routinely affords as much effort into making its movements unique it does the exterior of its wristwatches.

The MB&F Horological Machine No. 3 Frog case is made up of another 53 components, including mostly titanium and specially made pieces of sapphire crystal. Under the sapphire crystal dome “eyes,” the time is told via one printed aluminum dome for the hours and another aluminum dome for the minutes. The HM3 Frog Ti watch is 47mm-wide, 50mm lug-to-lug, and 16mm-thick. It wears remarkably comfortably on its handmade alligator strap with spring-loaded deployant clasp that is produced from 18k white-gold and titanium. 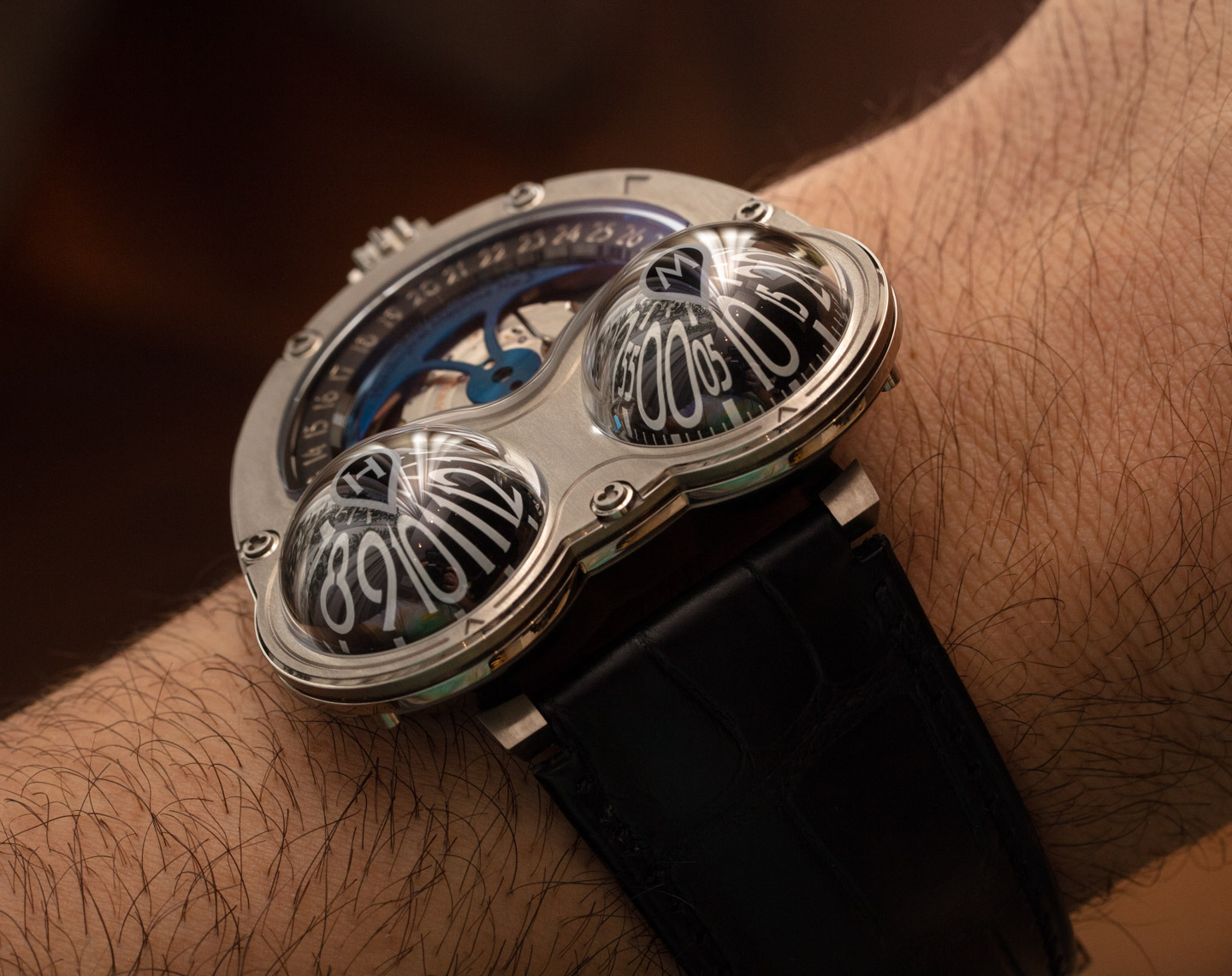 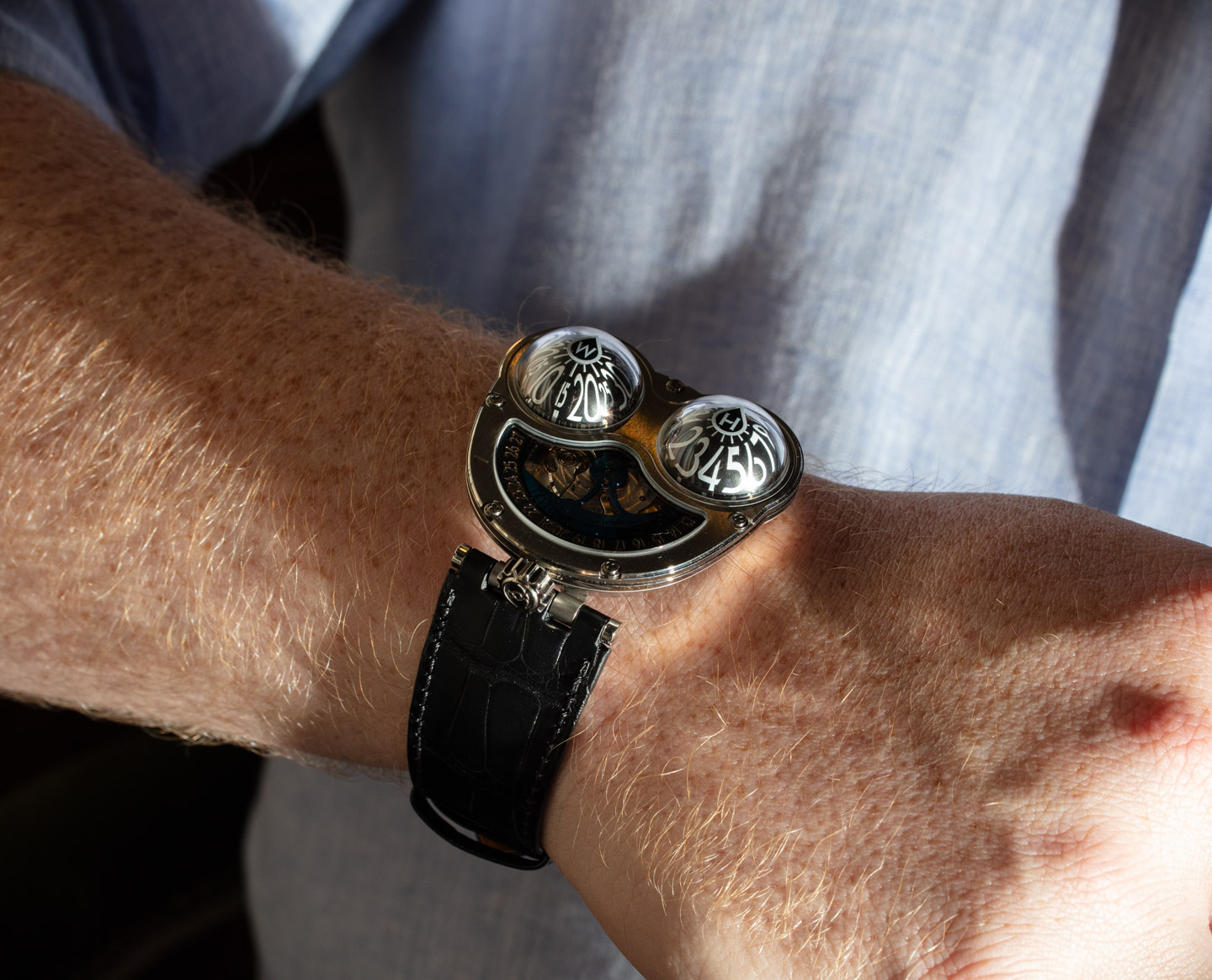 MB&F’s design of the HM3 Frog’s hour and minute indicators have since become iconic. A similar look with time being on two spinning domes with the peculiar font again shows up in the MB&F family in the HM10 Bulldog nearly a decade later. When the MB&F HM3 Frog watch was originally debuted, MB&F as a brand was quite different, not having branched out into adding its popular Legacy Machine collection or producing other products such as wall or desk clocks. The brand was all about the Horological Machine, with its futuristic vibes and confident originality. Many have argued that the HM3 is actually the product family that helped ensure the long-term appeal and near mainstream (within watch collector circles) awareness of the boutique Swiss watch brand. To this day, MB&F is considered one of the absolute leaders among independent watchmakers when it comes to product refinement, professionalism, character, and technical excellence.

The final brand-new example of the MB&F HM3 Frog Ti is an item that won’t last long. MB&F will continue to produce great watches in its future, but nothing quite like Horological Machine No. 3 Frog will ever emerge from its design pool again. Price for this MB&F HM3 Frog Ti watch is 91,000 Swiss Francs (currently just over $100,000 USD). Learn more or purchase via the MB&F Mad Gallery here.