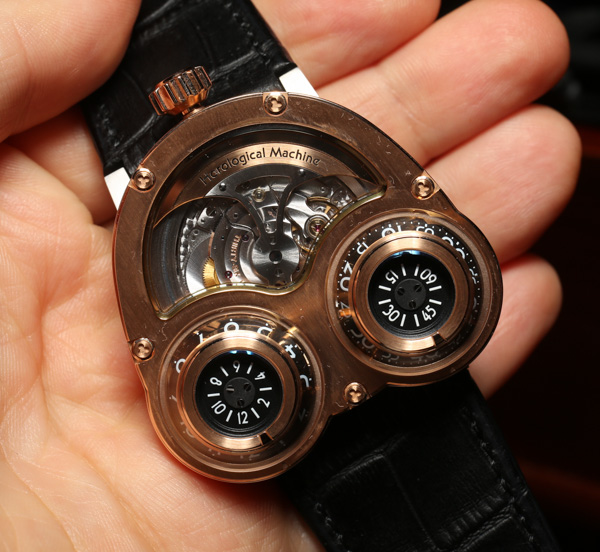 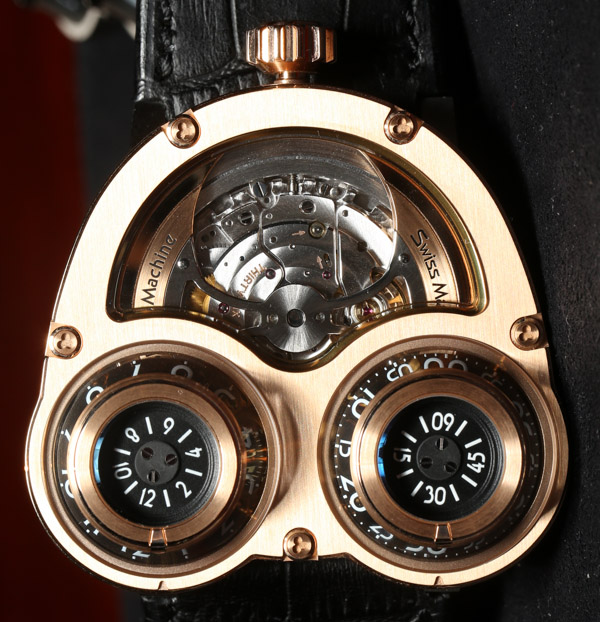 This new watch from MB&F is unique among a unique brand of watches. It is the first ever piece that is meant to be an improvement on an existing model. Not a limited edition or something trying to “step it up a notch,” The HM3 MegaWind is the new generation HM3 that improves on and replaces the first generation Horological Machine No. 3 collection. Normally, MB&F releases two types of watches. New watch collections and special or limited versions of those collections. For example, there was the HM3 and then the HM3 Frog. Those were distinct models, but weren’t meant to replace one another. The MegaWind is the new HM3 and means that MB&F may just be finding some product permanence. 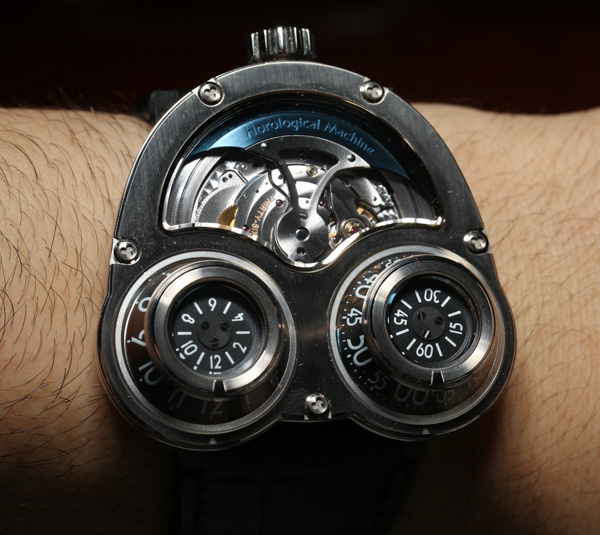 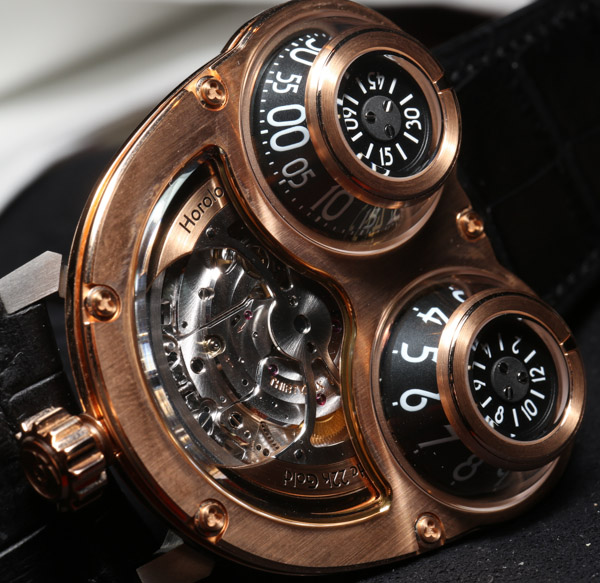 The “MegaWind” name comes from the larger battle axe-style automatic rotor visible through the front-facing sapphire crystal. By removing the date disc of the original HM3, MB&F was able to include a larger rotor (which is now three pieces versus one piece). This visually expands the movement compartment, though it is actually the same size as the original. Not that there was a winding problem with the original, but technically speaking a larger (and heavier) rotor means the watch should wind more easily while worn on the wrist.

These HM3 MegaWind pieces that you see are pre-production prototypes, so a few things will be polished up for the final retail models. Oh, and the straps on these pieces are not real alligator. The final ones will have real alligator of course, but brands often do this because alligator skin is a tricky material to travel with, especially in the US. I’ve always found that ironic because most watch straps are made from Louisiana alligator skin – not something from an exotic place where there is a real fear of harming an endangered species. 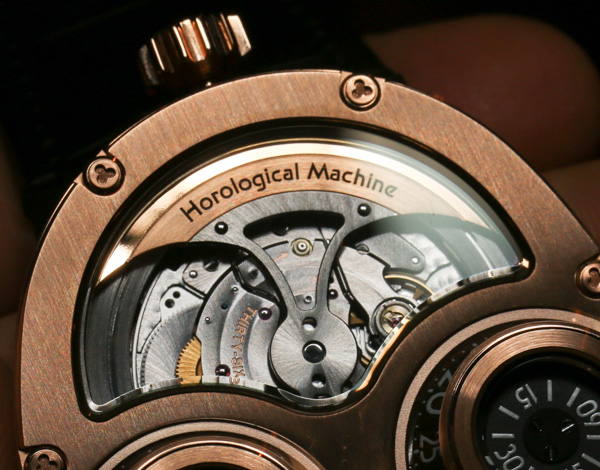 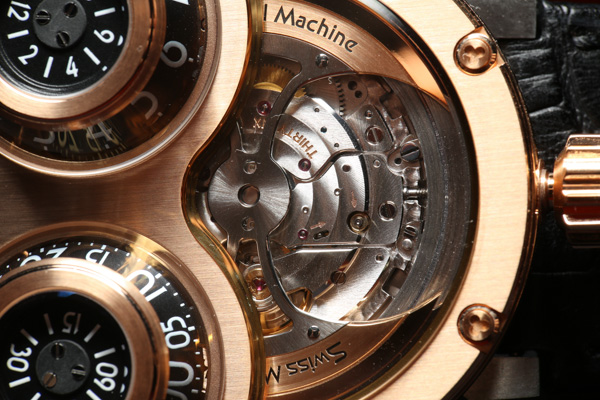 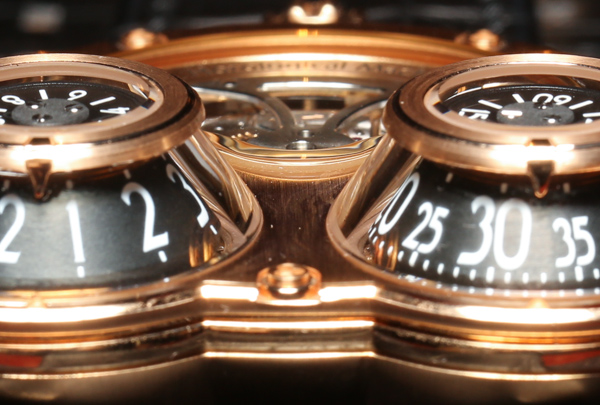 According to MB&F, the HM3 has been their top-selling model collection of all time. The original HM3 (which I reviewed here), spawned a number of limited edition pieces including several versions of the HM3 Frog (that replaced the two time cones with eye-like spheres) and very special pieces such as the HM3 JwlryMachine. Originally, the HM3 arrived in two forms based on the orientation of the case. There was the HM3 Starcruiser with the case orientation that we typically know today, but there was also the HM3 Sidewinder that was similar but with the case mounted on its side.

The more vertical orientation of the Starcruiser-style watch was preferred for models moving forward. One of the interesting yet minor new parts of the HM3 MegaWind are the lugs. The original had lugs with screws at the end, which MB&F decided to redesign. The lugs are more integrated now and allow for the strap to look more pleasant sitting on the case. Honestly, it is something you wouldn’t notice right away, but when the new lugs are pointed out to you it is an obvious improvement. 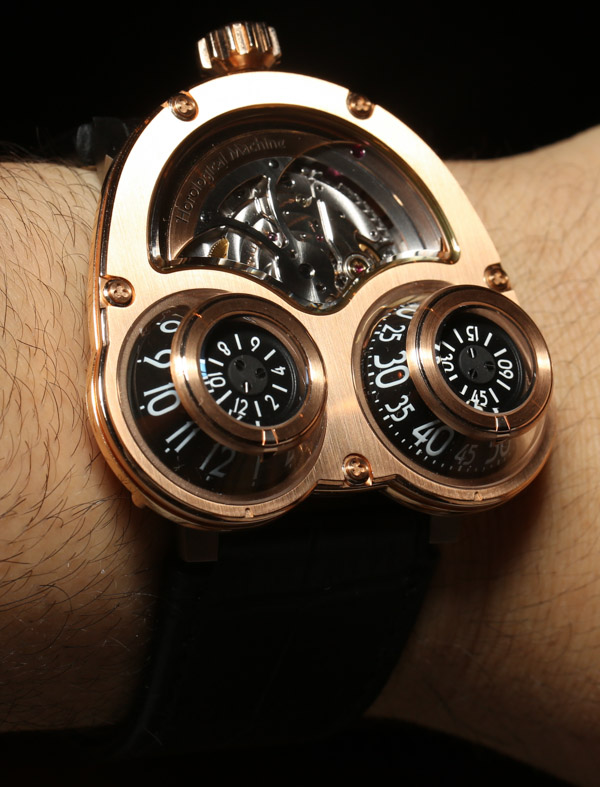 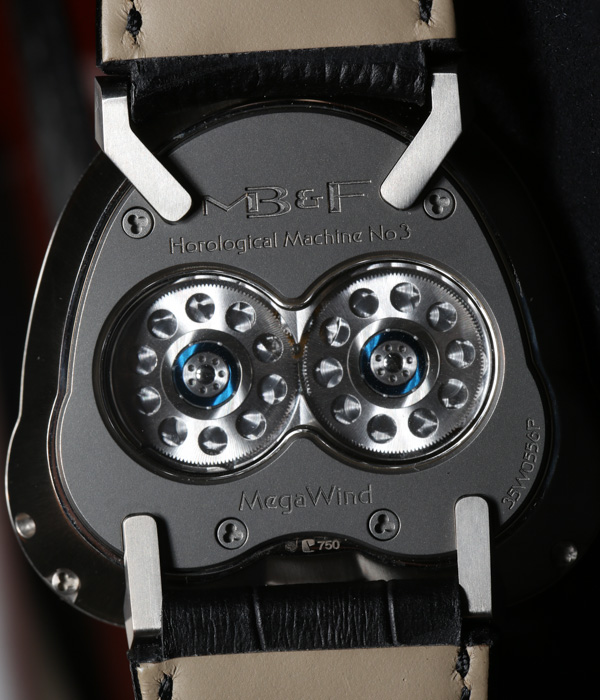 Probably the most important element of the HM3 MegaWind is how you tell the time – this is where the most obvious “improvement” comes into play. The original HM3 was typically criticized for being hard to read… and it was. The HM3 MegaWind takes some production cues from the Frog to help retain the conical time tower design of the HM3, but improves it. Thus, the two cones are taller, totally wrapped in sapphire crystal, and now finally fully able to be read from the side or from the top.

There is an arrow marker on the top of the cone that is used to read the time. One is for the hours and one is for the minutes. The original HM3 had just part of the cone wrapped in sapphire crystal, and reading the time from the top was rather difficult. The numerals are also applied with luminant for night viewing. An overall experience that involves more viewing area for the numerals and the wider viewing area allows the MegaWind to be a superior time-telling device.

Inside the HM3 MegaWind is the same Girard-Perregaux based automatic movement with the obvious modifications for the new hour and minute cones and lack of date indicator. The case is the same size and still seems to fit well and comfortably despite the unique cones that always seem to be looking at you. At launch, MB&F will offer the HM3 MegaWind in either 18k white gold or 18k red gold. The back plate of the case is once again in titanium.

Personally I like the new MegaWind more than the original HM3 merely because I appreciate the improvements and upgrades. It isn’t per se a better watch, but rather an evolution. And in this industry that is something I totally appreciate. We take watch collections that evolve for granted sometimes. Major brands that produce the Submariner, Speedmaster, or Aquatimer have been evolving them over the years, ideally making them better and better. But such product evolution and retention is rare amongst the boutique firms such as MB&F. So their willingness to take something good and popular, and make it better is a great sign. Price wise, the HM3 MegaWind will be priced exactly the same as the outgoing HM3. For the first year in 2013 they will produce just 40 pieces, and while the HM3 MegaWind is not limited, it will experience a limited production of pieces being made each year. Price (the same as the outgoing HM3) is $92,000. mbandf.com