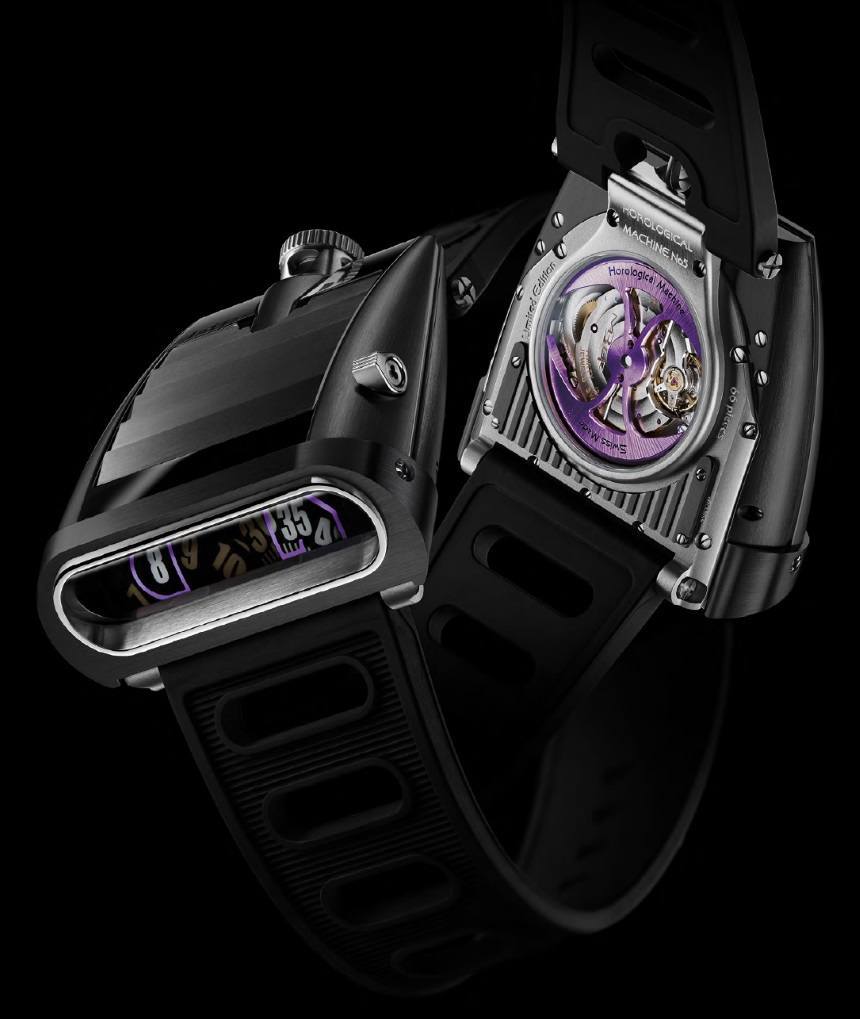 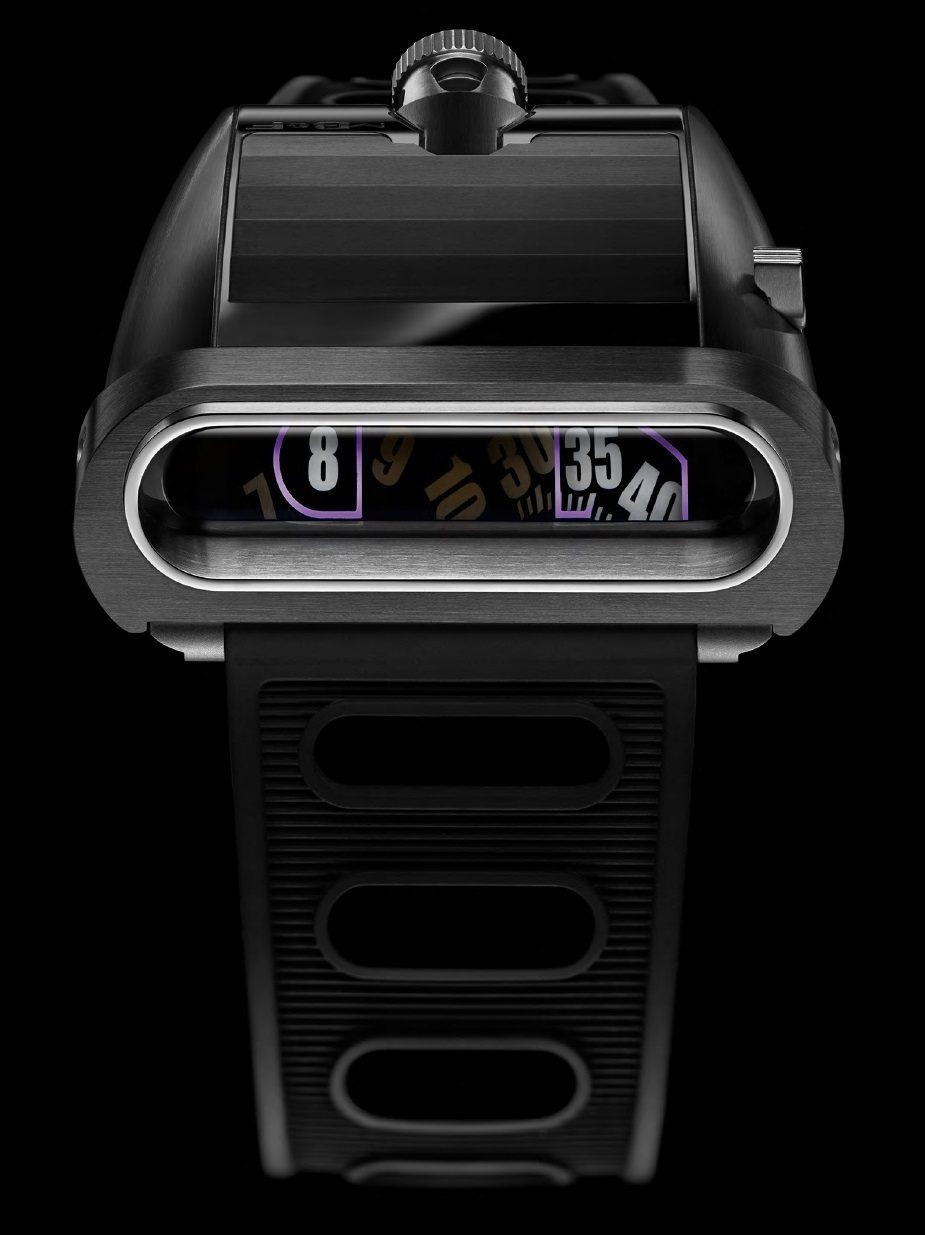 MB&F has a rule that they can’t do anything like other brands – a policy that, for the most part, they are pretty good at sticking to. With this newest and third iteration of the Horological Machine No. 5 (HM5), they created a black-cased watch, not with a black coating over metal, but with a novel material they like to call “CarbonMacrolon.” Thus, we have a dark version of the 1970s sports car inspired “driver’s watch,” paired with cool purple accents.

The HM5 (reviewed here) is one of my favorite Horological Machines. In addition to being amongst the most affordable (really not saying much), it is also amongst the most wearable. A driver’s watch, in the traditional sense, allowed the wearer to read the time at a glance from the side of their watch, with their hands on a steering wheel. The concept is probably about 100 years old, in some form or another, and while it doesn’t necessarily apply today, the idea is interesting. I am not sure when the wedge-style driver’s watch came about, but the design has led to an interesting “wearing experience” that is probably at its apex with the Horological Machine No. 5 (originally nicknamed “On The Road Again”). 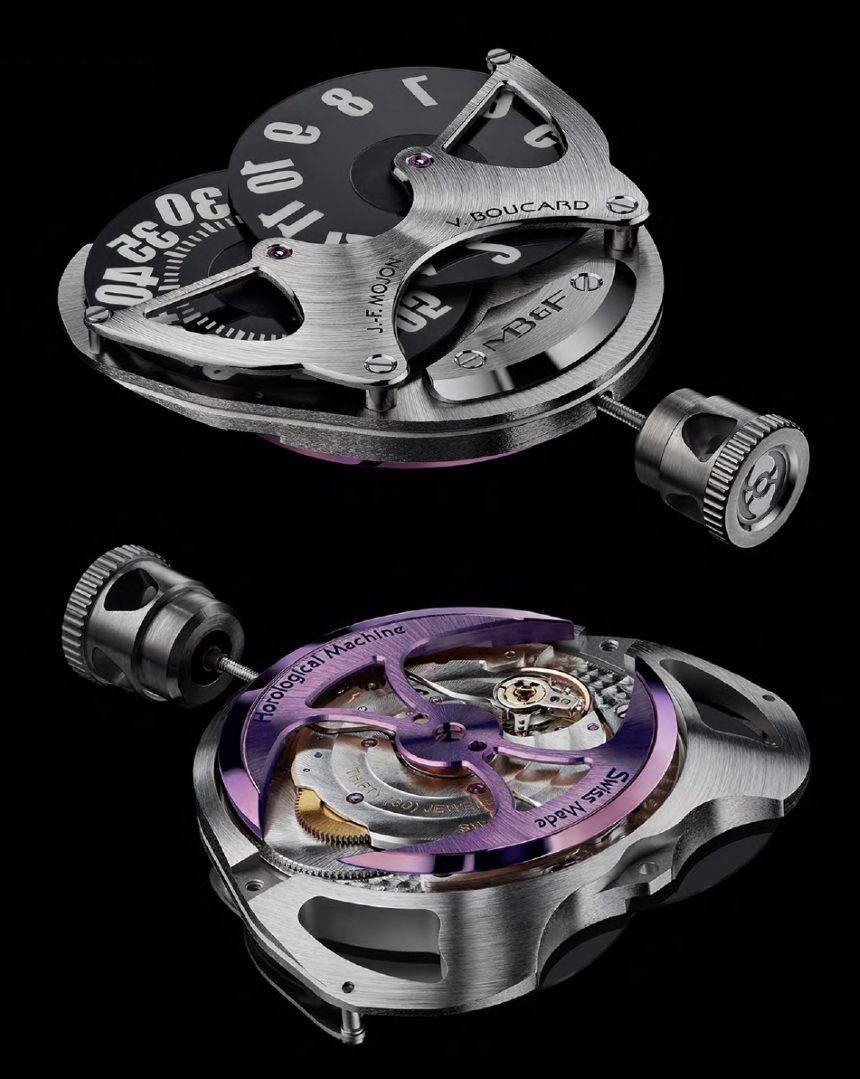 One of the most interesting things about the watch is the louvre system on the top of the case. A small lever allows the wearer to open and close the shutters, letting in light. This light charges the lume on the discs that display the time, so that you can read the time more easily in the dark. The discs are actually horizontal, but the time is displayed vertically, thanks to a “prism” that bends and magnifies the image for your reading pleasure. It is a neat effect, and to my knowledge, no one has done this better than MB&F. The purple color in the MB&F HM5 CarbonMacrolon happens to look pretty cool as well.

So what is CarbonMacrolon? Well, first of all, the main case of this version of the HM5 is not in metal. CarbonMacrolon is based on Makrolon, a fancy polycarbonate material invented by Bayer years ago. MB&F worked to create a unique version of it by mixing a black Makrolon polycarbonate with carbon nanotubes (something we are seeing a lot in various forms of exotic high-end watchmaking from brands such as Richard Mille). According MB&F, the result is an extremely dense and durable polycarbonate which is as strong as steel, and can be polished like steel. Furthermore, because the substrate material is also black, wear and tear on the case will not cause the black coating to wear off, as is possible with watches with a PVD coating, for example. 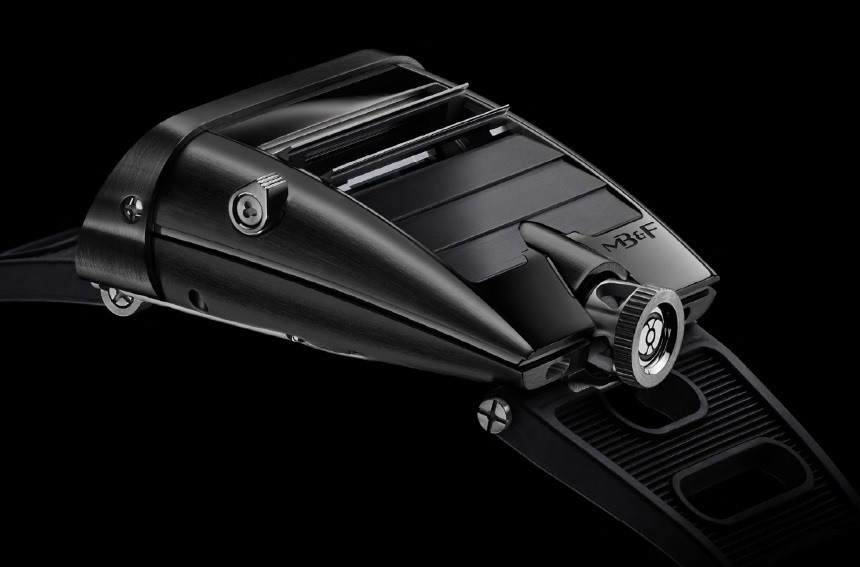 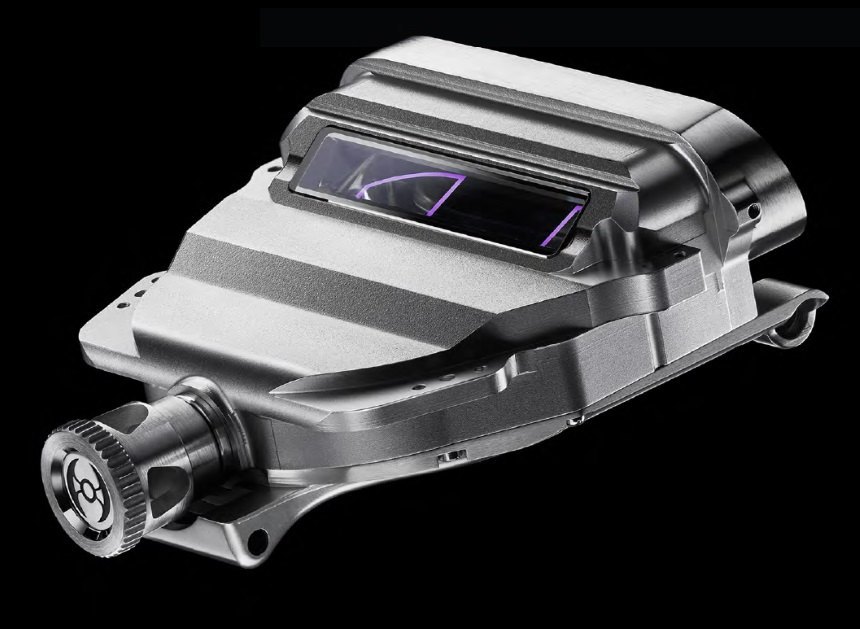 I will have to offer more of an opinion regarding the CarbonMacrolon material in the future, when I am able to get a hands-on impression of it. What I can say is that, while it is easy to dismiss some of these exotic polycarbonates as “mere plastics,” that is only technically true. The variety of resins and polycarbonates now available means that there are significant differences between standard consumer plastics and some of the more interesting industrial or exotic materials now being tested by high-end watch brands. However, unlike materials such as gold or other precious metals, I don’t think the consumer is able to understand their value as well.

I’ve discussed the MB&F HM5 a few times before so I am not going to recap all of the technical features or aspects of the watch once again. I will remind you that the MB&F HM5 case is 49mm wide and 51.5mm long. It is also 22.5mm thick. The case alone is produced from 80 parts (not including the movement) and is water resistant to 30 meters. The movement is housed in its own special container and was developed by master designer Jean-Francois Mojon and Vincent Boucard at their company, Chronode, in Switzerland. 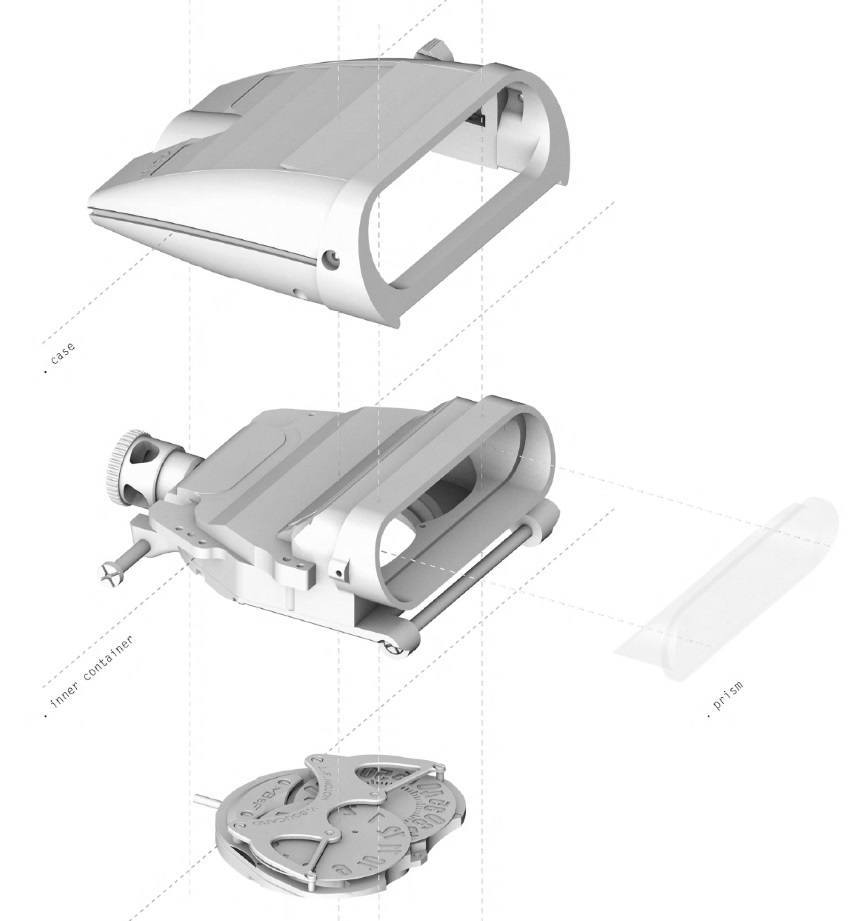 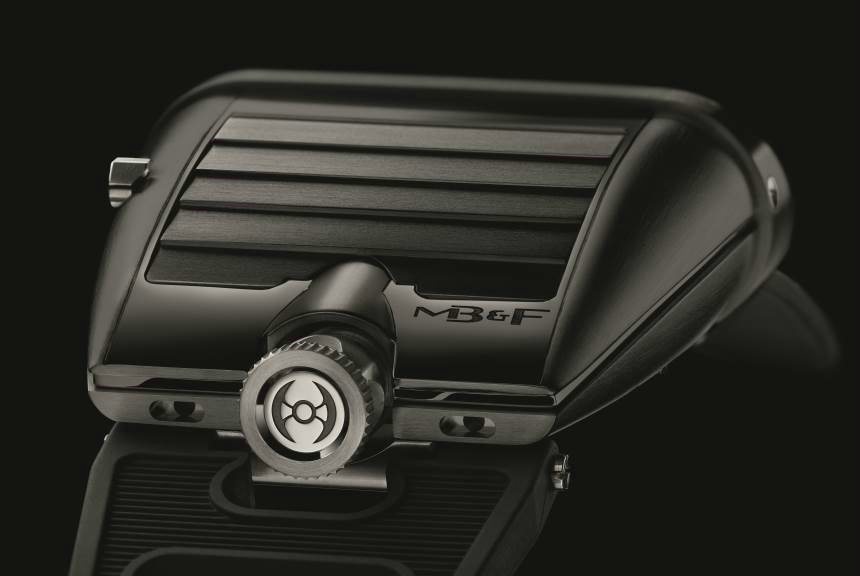 The mechanical movement inside of the MB&F HM5 CarbonMacrolon uses a base Sowind (Girard-Perregaux) gear-train with disc system to indicate the hours and minutes “digitally.” The movement is an automatic, and uses a purple-colored 22k gold automatic rotor shaped like the MB&F battle ax logo. You can see the rotor through the bottom of the MB&F HM5 CarbonMacrolon watch case. Attached to the case is a remarkably comfortable rubber strap.

While the price for the second HM5 RT watch, with its 18k rose gold elements, was more than the original HM5, the MB&F HM5 CarbonMacrolon retains the original price that MB&F set for the HM5 when it was originally debuted a few year ago. Furthermore, the MB&F HM5 CarbonMacrolon will be part of a limited edition of 66 pieces. Price is $63,000. mbandf.com