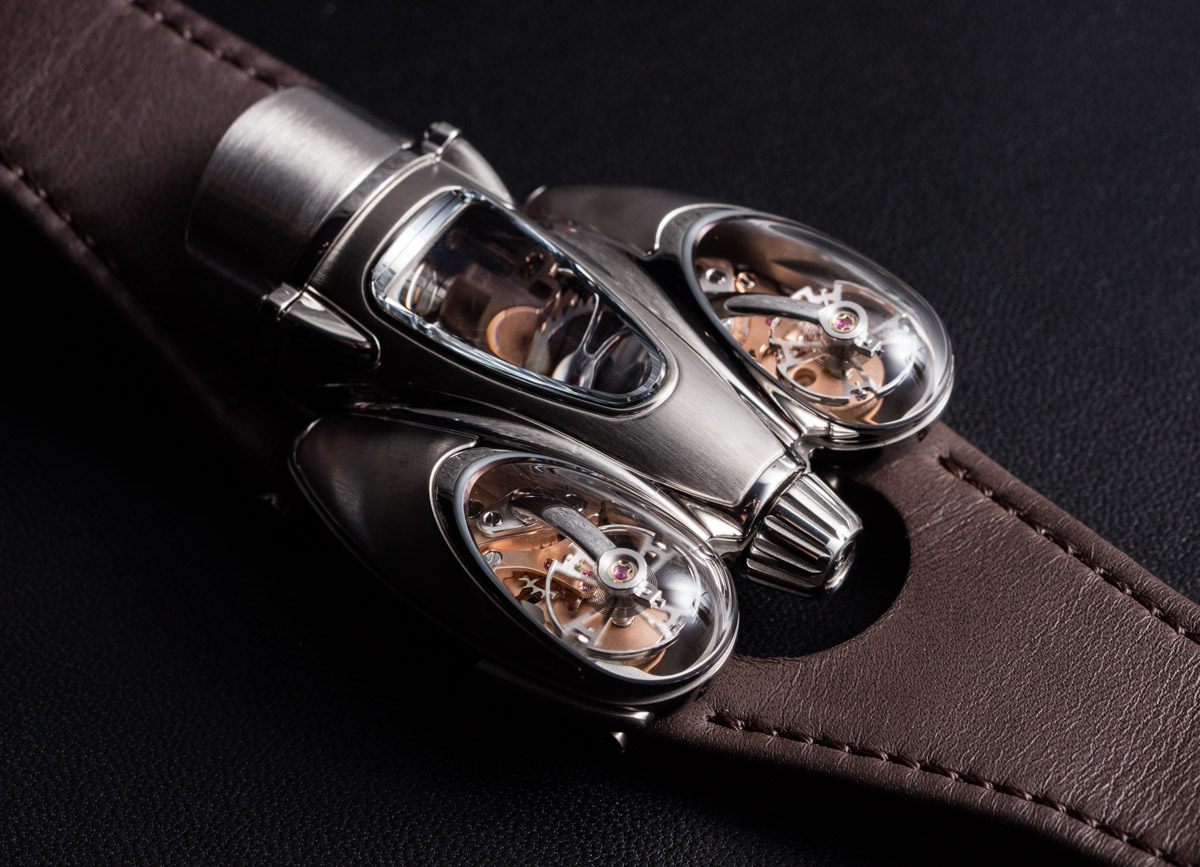 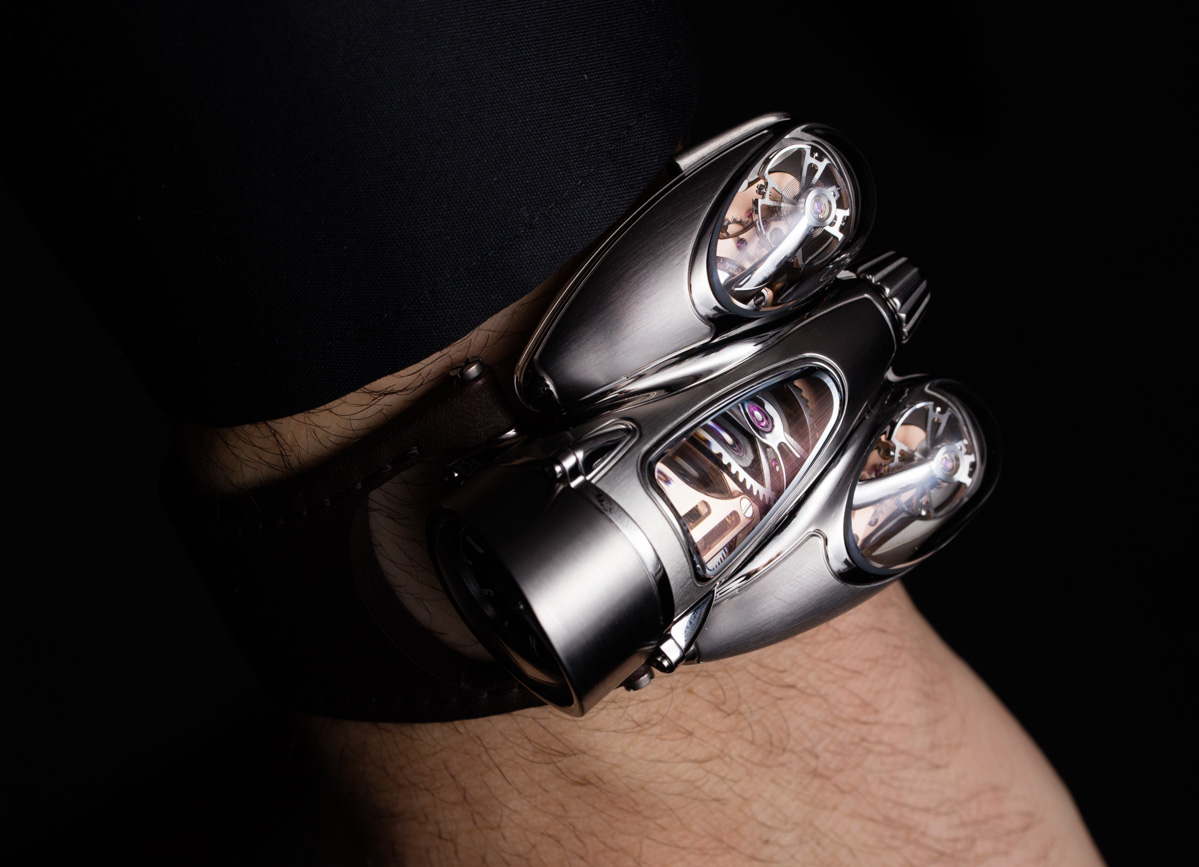 The MB&F Horological Machine No. 9 (or the “HM9”) was debuted by aBlogtoWatch here, and today I take a hands-on look at one of the two “launch versions” for this interesting “art watch.” The difference between currently existing versions of the HM9 Flow is pretty much the dial: the MB&F HM9 Flow Air (reference 90.TL.AB with an aviation instrument-style dial) and the reference 90.TL.RB HM9 Flow Road, pictured above, which is automotive instrument-inspired. Each is a limited edition of just 33 pieces, and this is, perhaps, the first time MB&F has offered multiple versions of a watch (at the same time) that look so similar to one another.

The HM9 Flow received a relatively quiet release, probably because this is an attractive but not revolutionary product for MB&F. I will, however, say that it looks a lot better in real life (as opposed to the marketing images), and it is remarkably comfortable to wear. For me, the Horological Machine No. 9 Flow is a thematic follow-up to the MB&F HM4 which was released almost a decade ago. Both of these watches look like fast-moving, flowy objects on the wrist, and both are about appreciating titanium as a material;, both only tell the time, and both are relatively similarly priced (the HM4 would likely cost the same as the HM9 if both were released today). 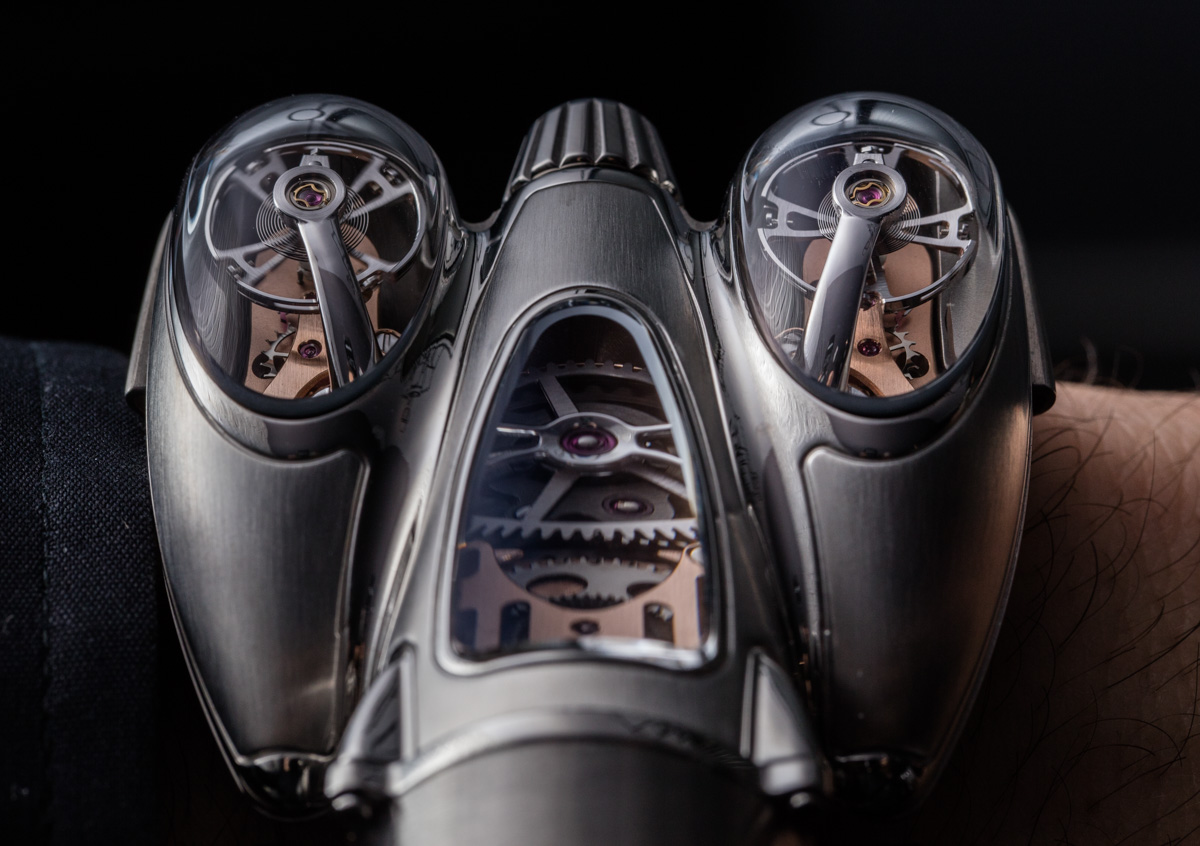 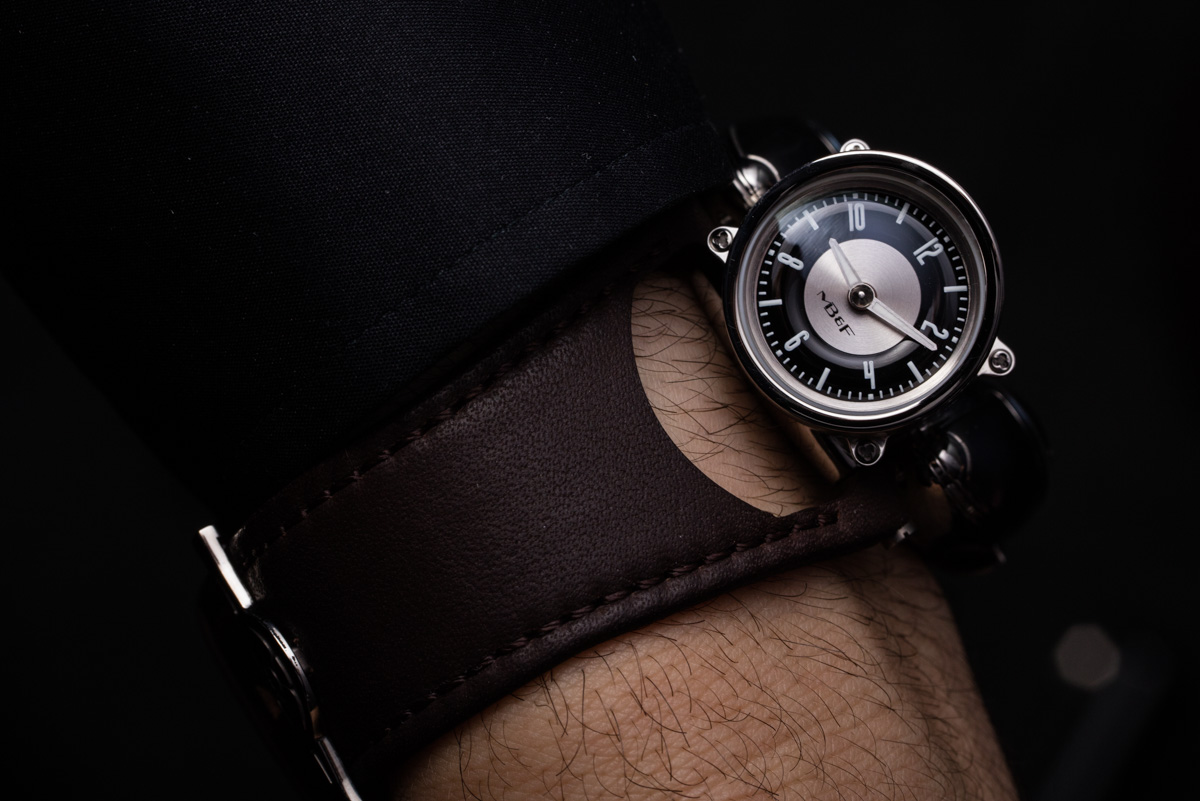 The HM9 Flow has an interesting “triple teardrop” (as I call it) case from brushed and polished grade 5 titanium. Unlike the HM4, the HM9 has just one dial for the time but is seemingly inspired by the MB&F Legacy Machine 1 (LM1) in regard to the use of double balance wheels. This latter feature in the movement is more or less done for aesthetic effect, which is fun as you can see the double 18,000 bph frequency balance wheels operating under the structural sapphire crystals placed over them. MB&F is among the few companies willing to put the time and effort into working with uncommonly shaped pieces of machined sapphire crystal — and to excellent effect. The five sapphire crystals around the case are really part of the structure, as opposed to a mere effect allowing you to see in the case. That said, the crystals do, in fact, offer a fun and flirtatious view of various parts of the exclusive mechanism inside.

Discussing the case dimension of the HM9 Flow isn’t actually going to assist you when it comes to understanding how a timepiece of this shape wears and would probably make the timepiece sound larger than it actually feels. The lugs are intentionally placed in a more narrow position than the overall length of the case, which helps wearability. The HM9 Flow is 47mm-wide, 23mm-thick and 57mm-long. The case alone is produced from 43 parts (water resistant to 30 meters) and another 301 parts go into the exclusive HM9 movement. I mention the water resistance because even though it isn’t much, it did require a specially patented three-dimensional (as opposed to being on a flat plane) gasket between the main case parts. 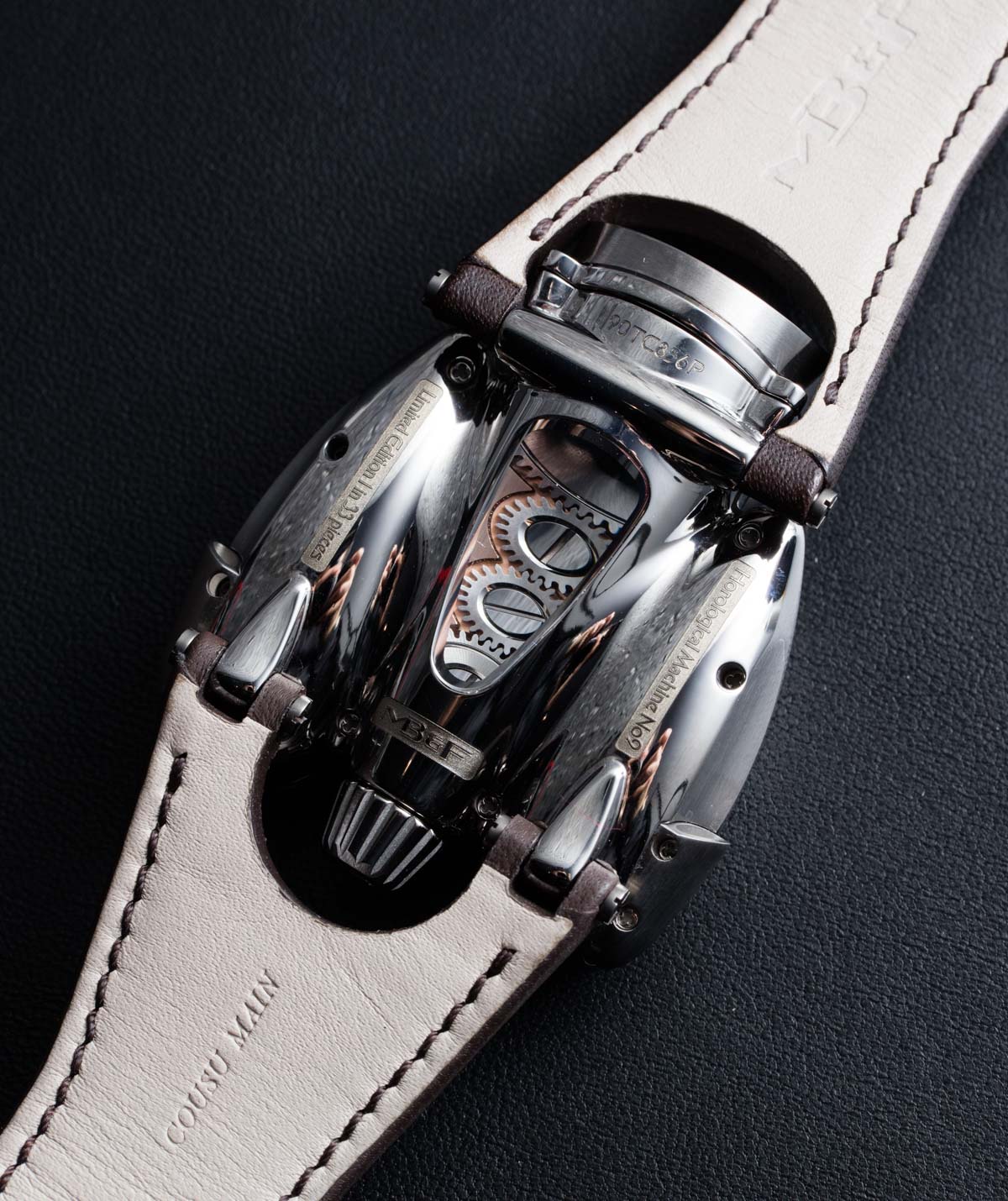 Other than the dial, the biggest difference between the MB&F HM9 Flow Air and Flow Road is the finishing of the movement. The HM9 Flow Air uses a gray-coated movement (the bridges, that is), and this HM9 Flow Air has an attractive rose gold-toned movement. The movement itself is all about the architecture and technique. Manually wound with 45 hours of power reserve, the 2.5Hz movement uses a dual set of balance wheels (connected with planetary gear differential system) and a single dial for just the time with minutes and hours. The crown is easy to grasp and also seemingly part of the larger case aesthetic. For what the HM9 Flow lacks in functionality, it certainly makes up for in visual character.

The swoopy design of the HM9 Flow case is clearly inspired by a generation of airplanes and automobiles whose shape was perfected in a wind tunnel in order to enhance aerodynamics. It is certainly true that a wristwatch does not require aerodynamic qualities, but at least you can have a very compatible timepiece if you own a vintage vehicle with this look. I happen to think the case curves are handsome and fun, even elegant, though MB&F stops short of the product looking at all feminine. 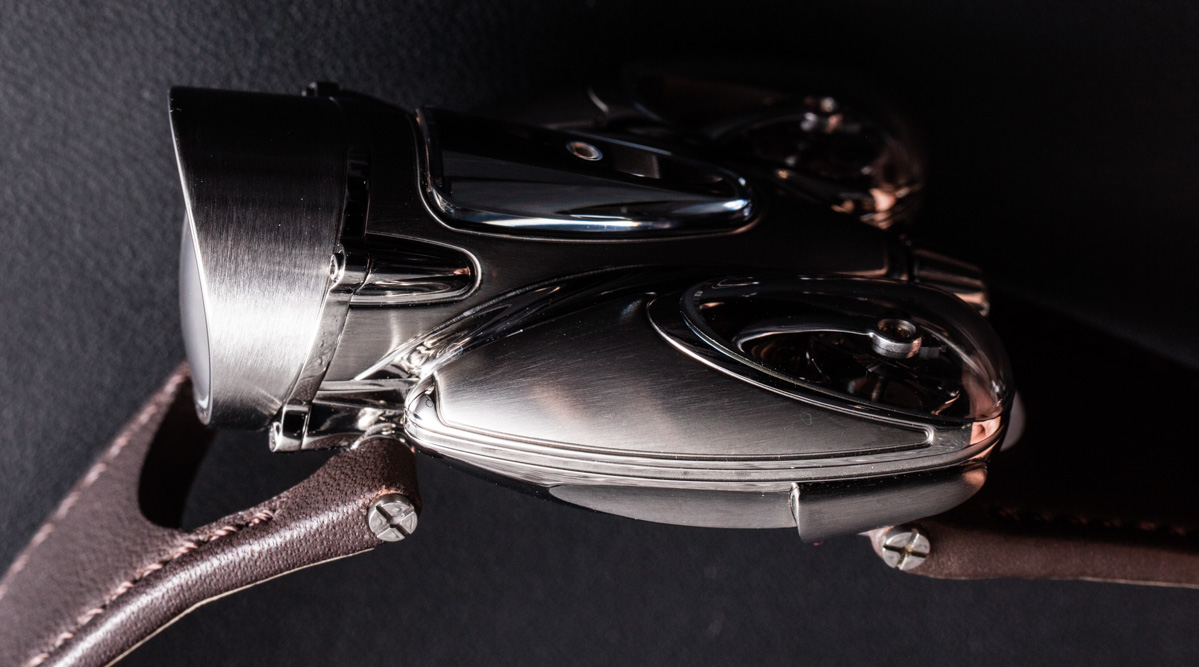 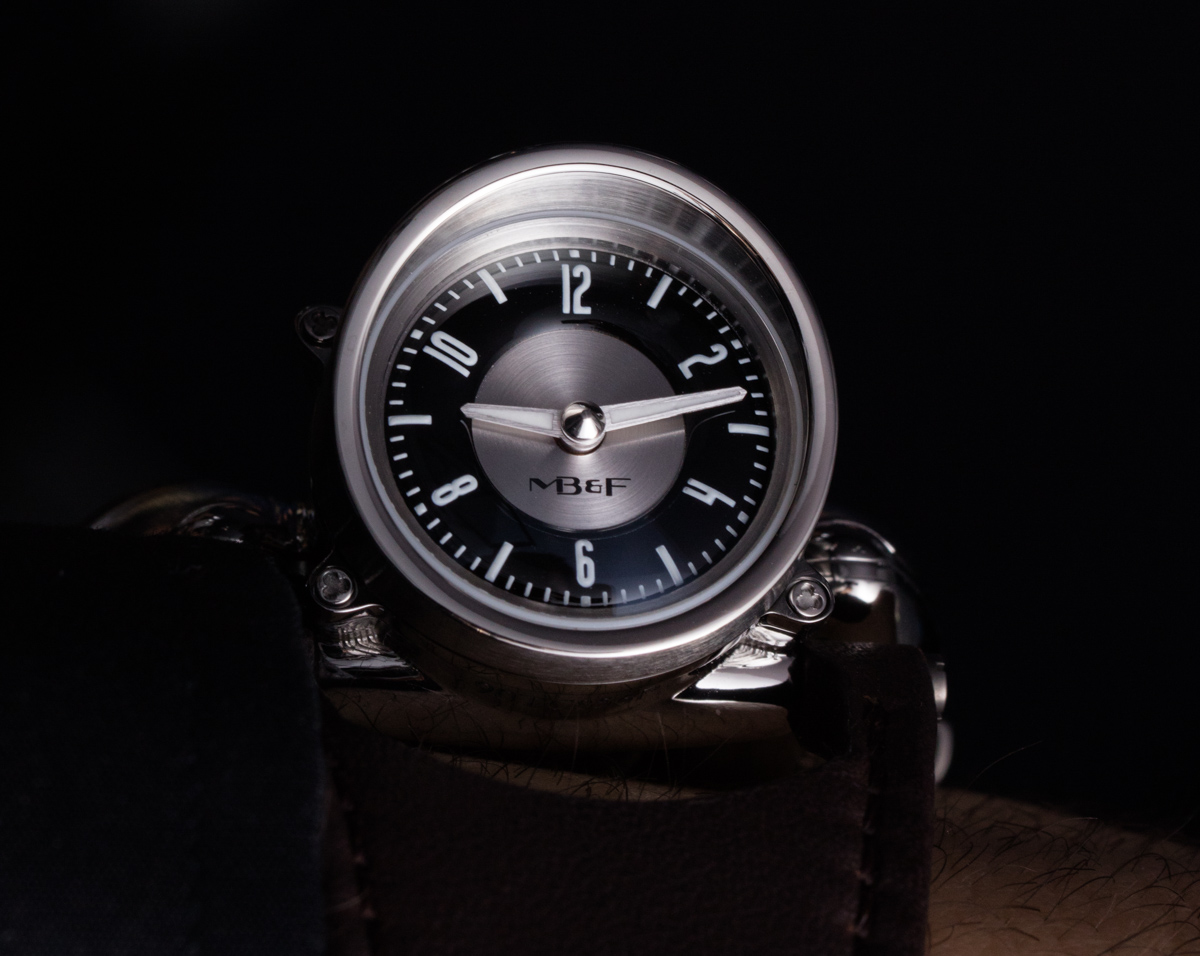 Of course, the dials to indicate the time are the soberest part of the watches (well, the straps are in a pretty standard brown calfskin material), and that is probably a good thing in order to promote legibility. The dial for the HM9 Flow Air certainly looks like a small aviation clock, while that of the HM9 Flow Road very much looks like something out of an old Buick or other mid-20th century streamlined American automobile. Fun, collectible, and very much an MB&F in the classic sense, the Horological Machine No. 9 Flow Air and Flow Road are logical extensions of the aesthetic, mechanics, and exclusivity we know and love from MB&F in Geneva. Price for the HM9 Flow Air or Flow Road is $182,000 USD. See more at the MB&F website here.