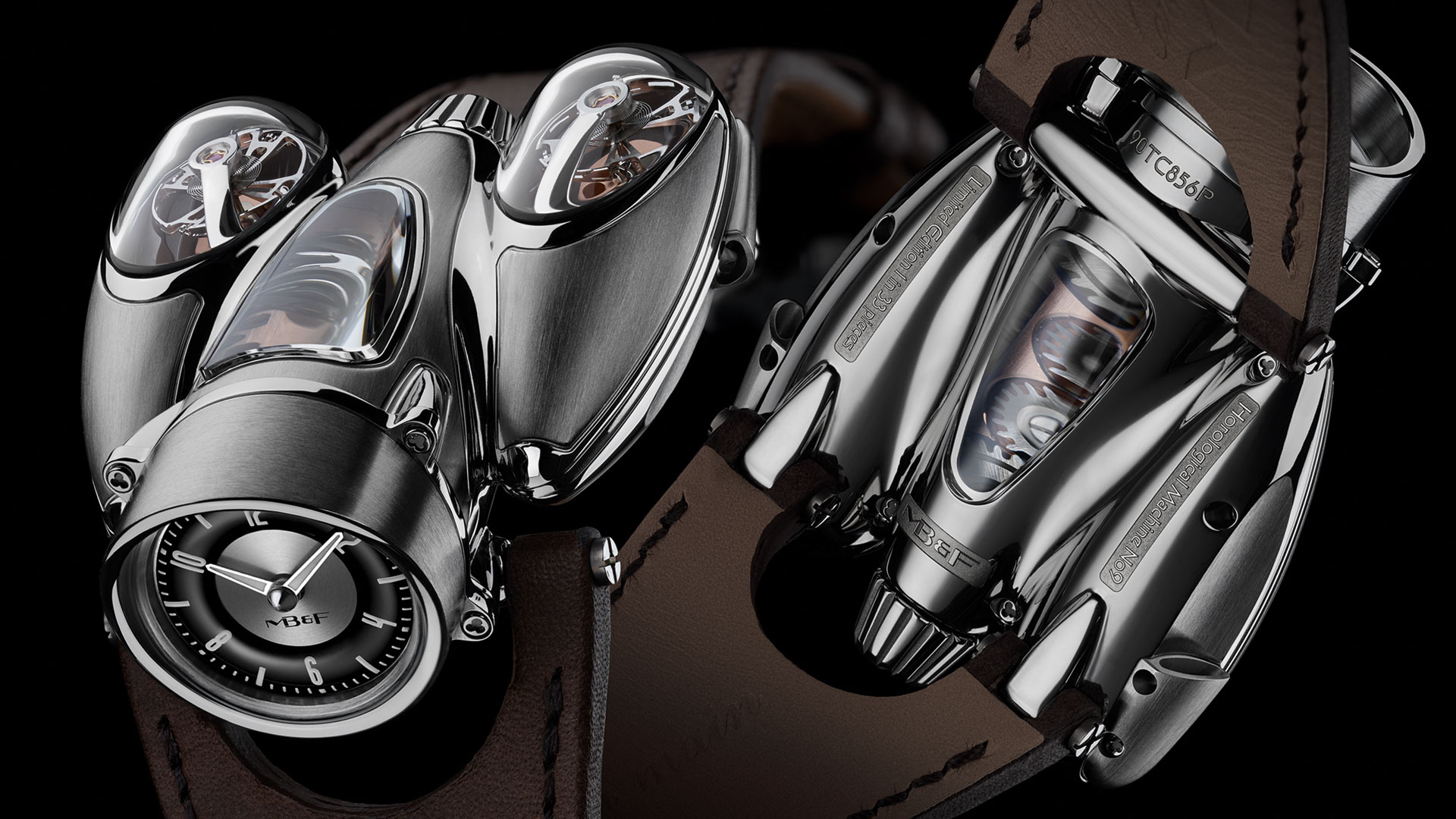 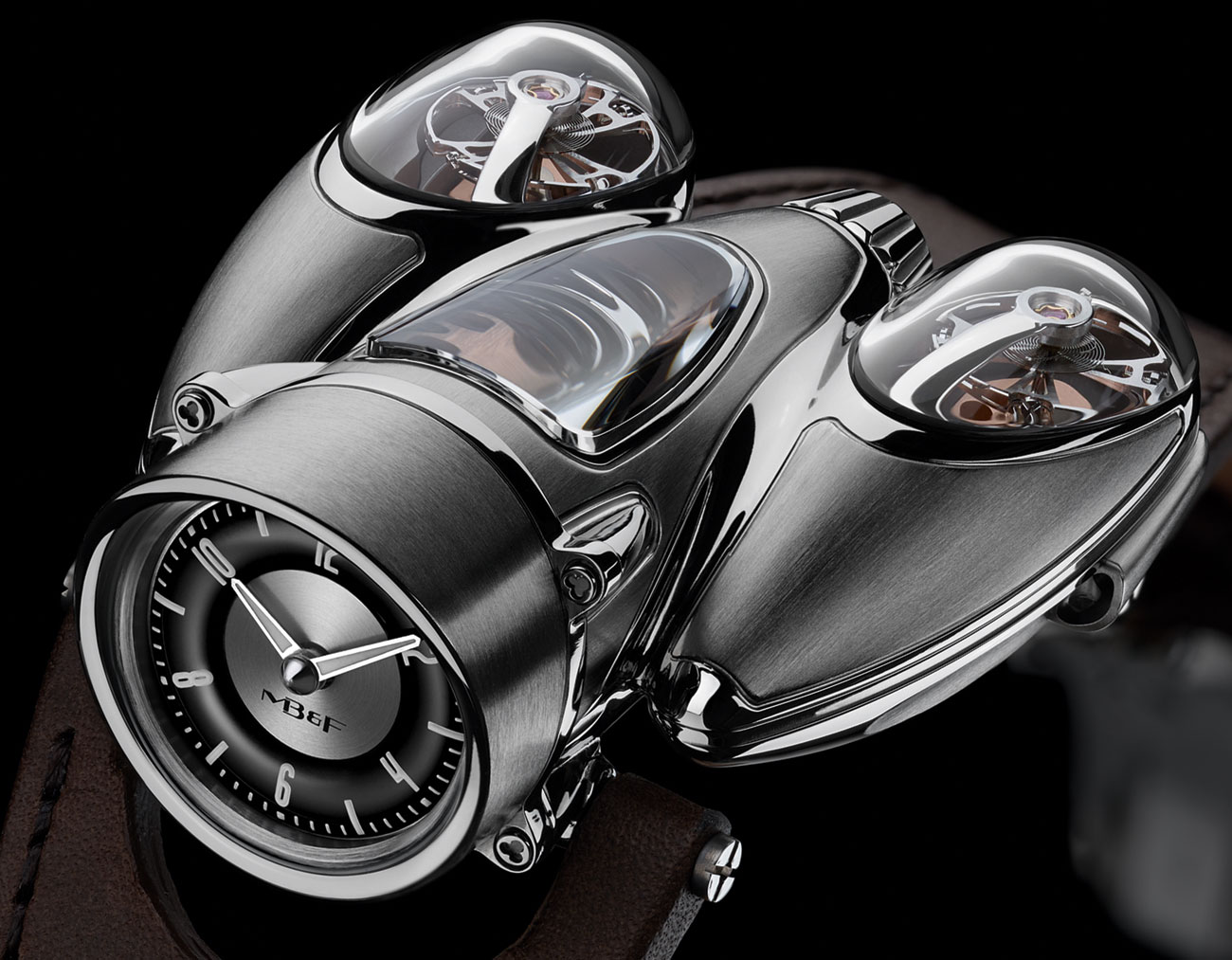 Today, Geneva-based MB&F debuts the ninth iteration of their Horological Machine watch series with the MB&F HM9 Flow Air and the HM9 Flow Road. These are both highly limited edition models with the same platform but some cosmetic differences between them. We see a continuation of MB&F’s long-standing interest in avant-garde timepieces inspired by vehicles, as well as a new take on offering wearable, kinesthetic art for a price nearing $200,000 each. 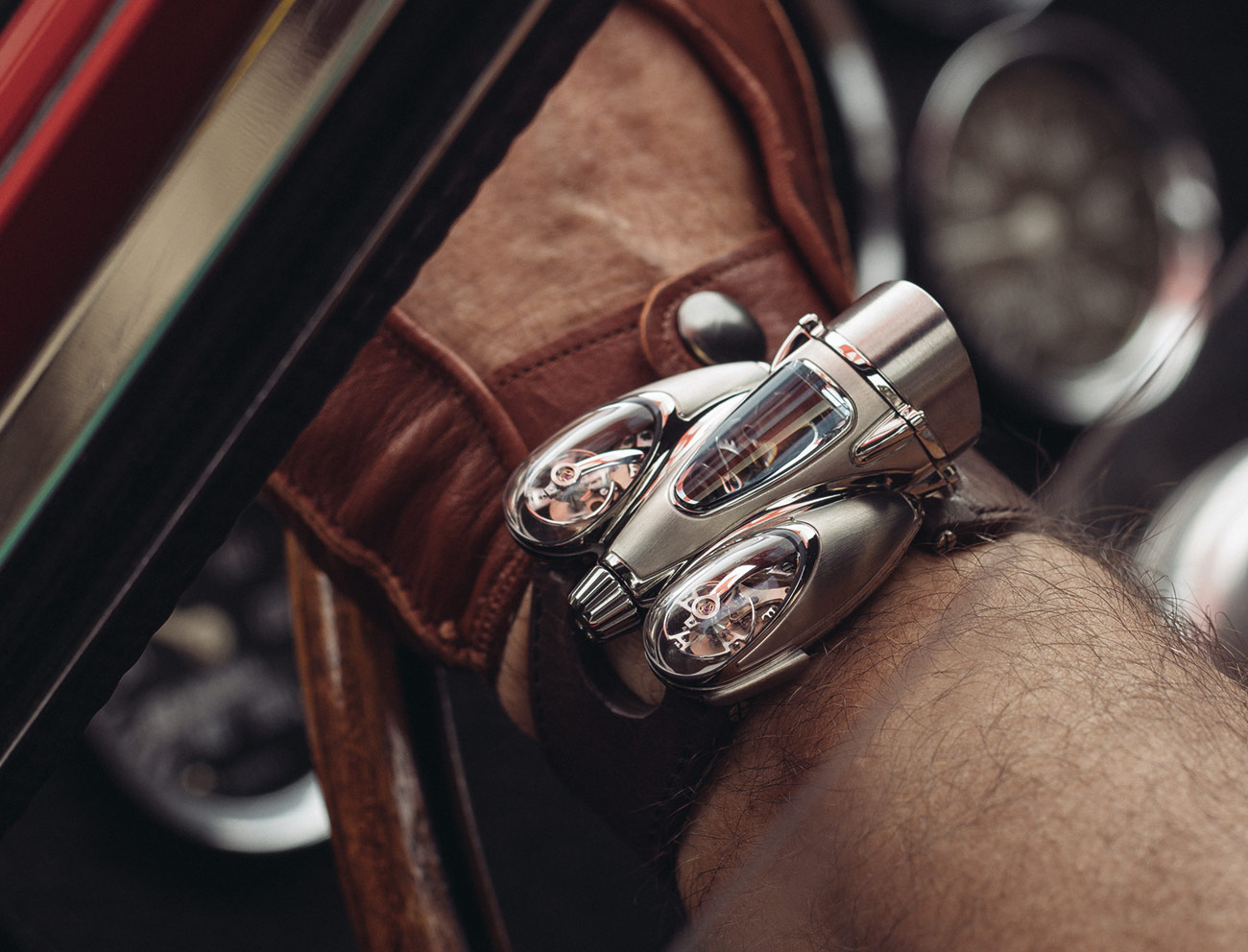 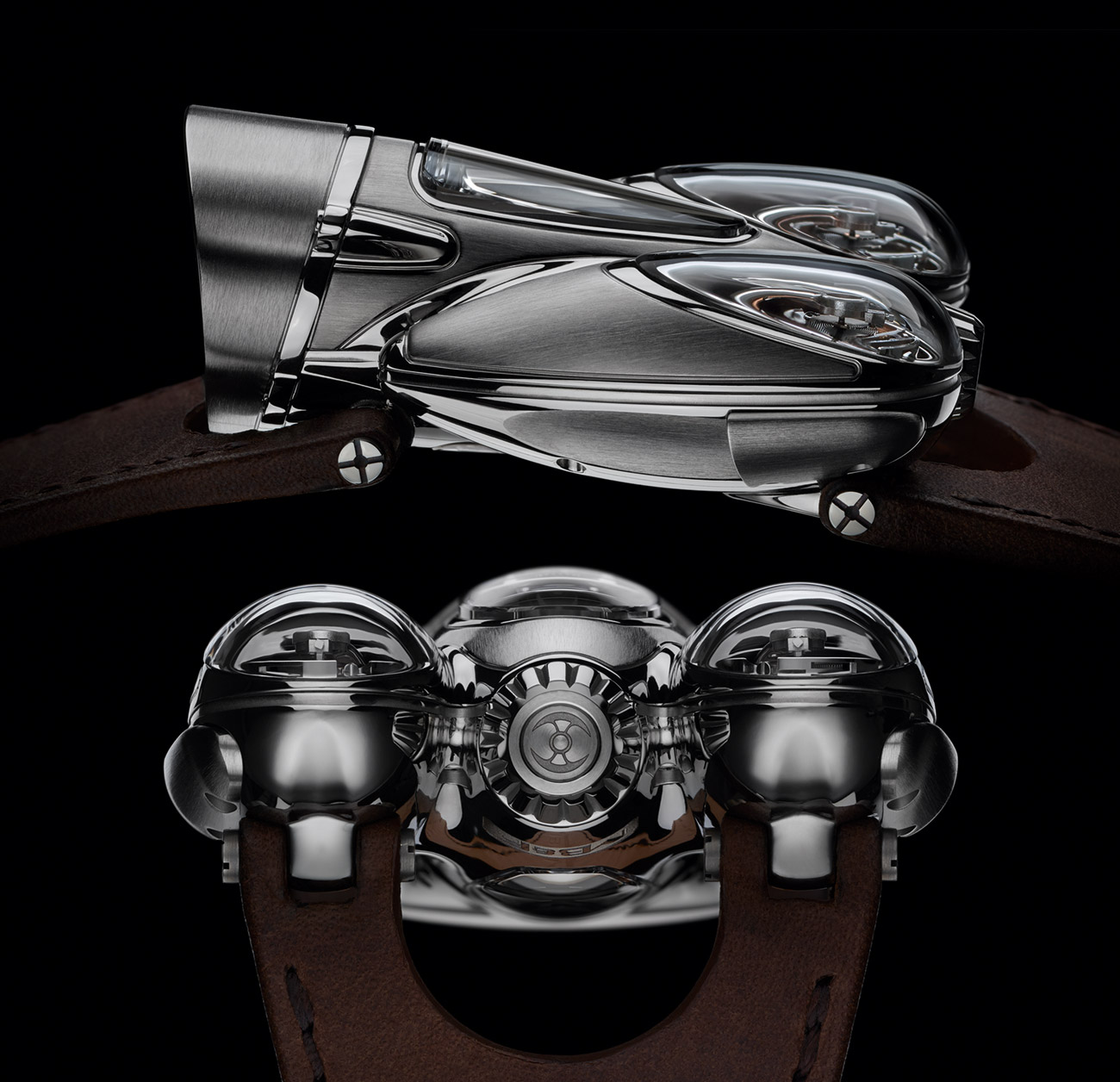 The MB&F HM9 Flow’s curvy case is inspired by vehicles designed for aerodynamic performance from the 1940s and 1950s. The swoopy lines of the side-facing case are reminiscent of wind tunnel-conceived machines and their shells. MB&F attempts to attract fans of both the car and aviation worlds as the dials of each version of the HM9 suggest various themes. The MB&F HM9 Flow Air, for example, has an aviator-style watch dial (and a dark-colored movement), while the MB&F HM9 Flow Road has a dial which is inspired by automobile speedometer dials and has a rose-gold-plated movement. 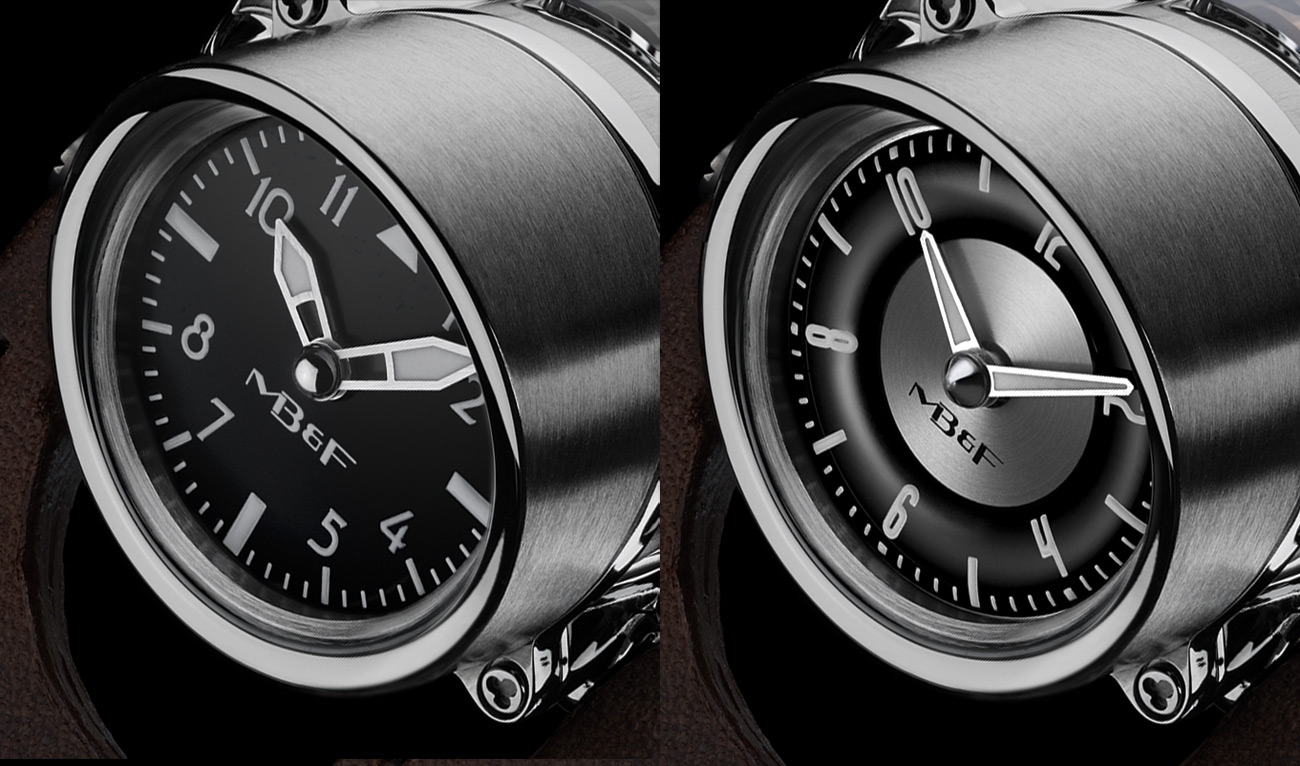 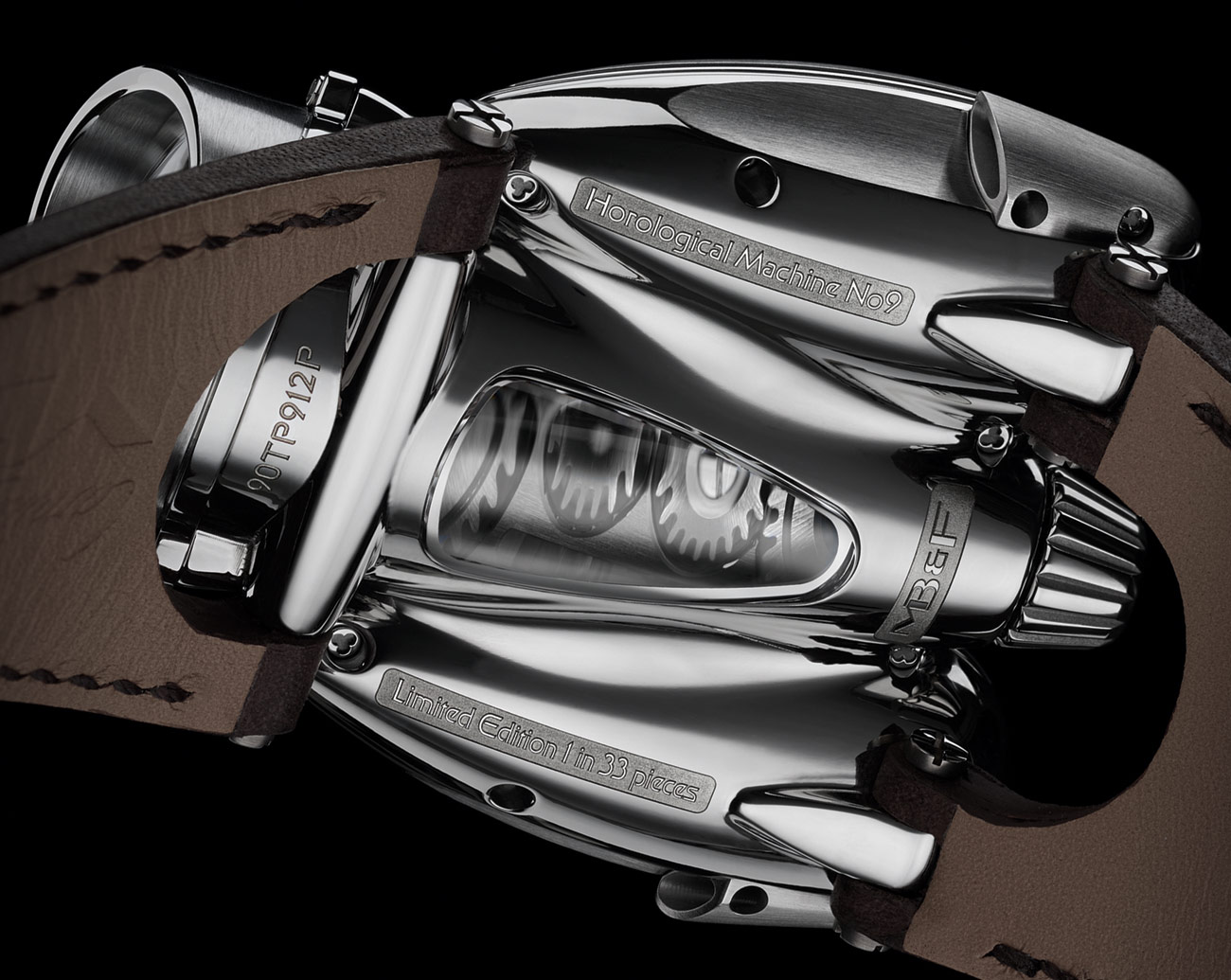 In many ways, the MB&F HM9 Flow can be seen as a combination of the MB&F HM4 as well as the MB&F HM6 Space Pirate. This includes the curved case, overall theme, style of indicating the time, as well as the thematic architecture of the movement. With that said, the MB&F HM9 Flow includes all original parts including the movement, which was developed in-house by MB&F. A piece of art unto itself, the HM9’s “engine” has a lovely design and features just the time with hours and minutes on a single, traditional-style dial. The interesting element of the manually-wound mechanism is the inclusion of double balance wheels. Visible through their own sapphire crystal windows, the double balance wheels offer what is likely to be a stunningly impressive animated wearing experience. By that, I mean the watch itself will appear to be constantly moving, given the visible oscillation of the opposing balance wheels. 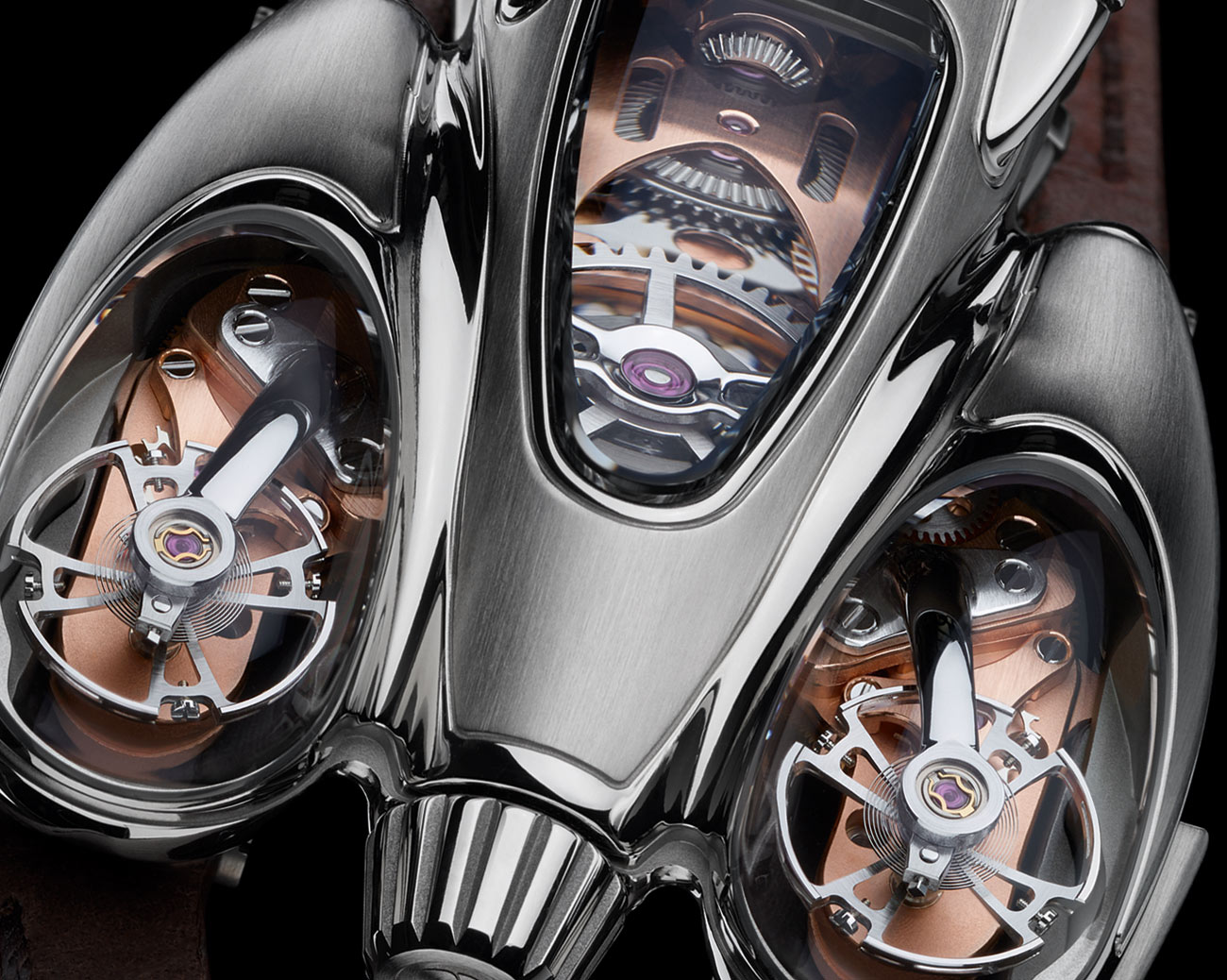 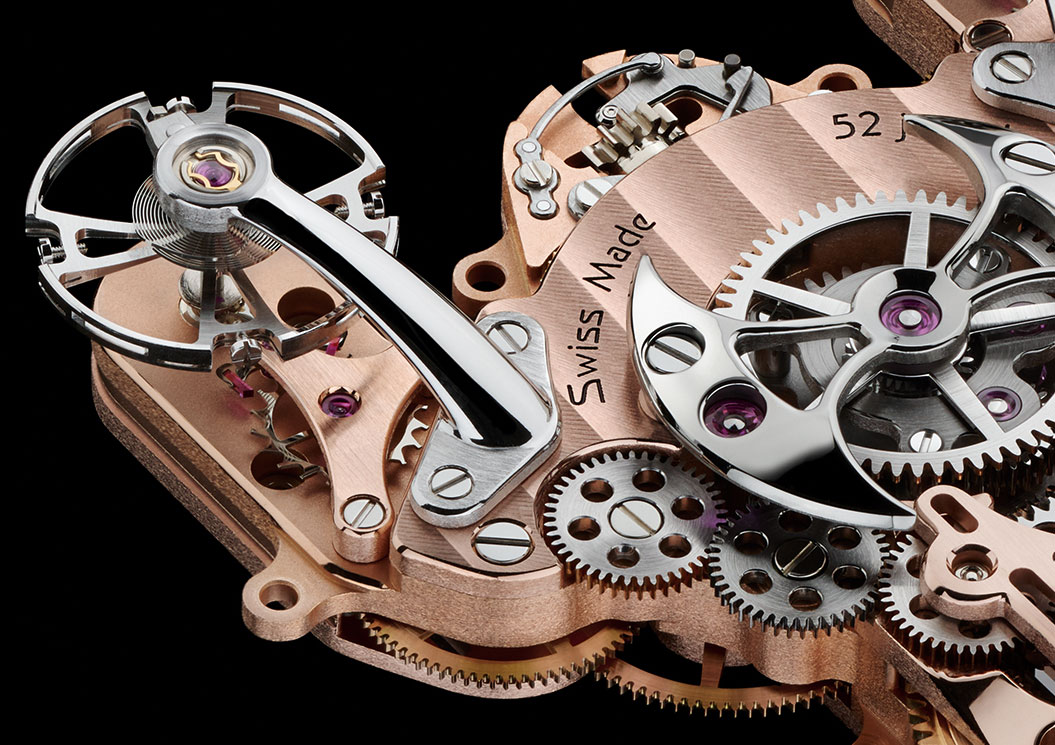 Horologically speaking, the two balance wheels will be connected to the same running train via a differential. The operational results of each regulation organ will be averaged out – theoretically offering a bit more accuracy (assuming the watch is properly regulated to begin with). This is more simple and straightforward than other types of multiple balance wheel watches MB&F has produced such as the Legacy Machine 2. The LM2 watch, for example, was an exercise in two very close proximity balance wheels which can create a harmonizing “resonance” effect between the operational frequency of the two balance wheels. In the MB&F HM9, the balance wheels are far too distant from one another for any resonance effect to take place. As I said, their operation is independent and their timing results are averaged out for the purposes of displaying the current time. 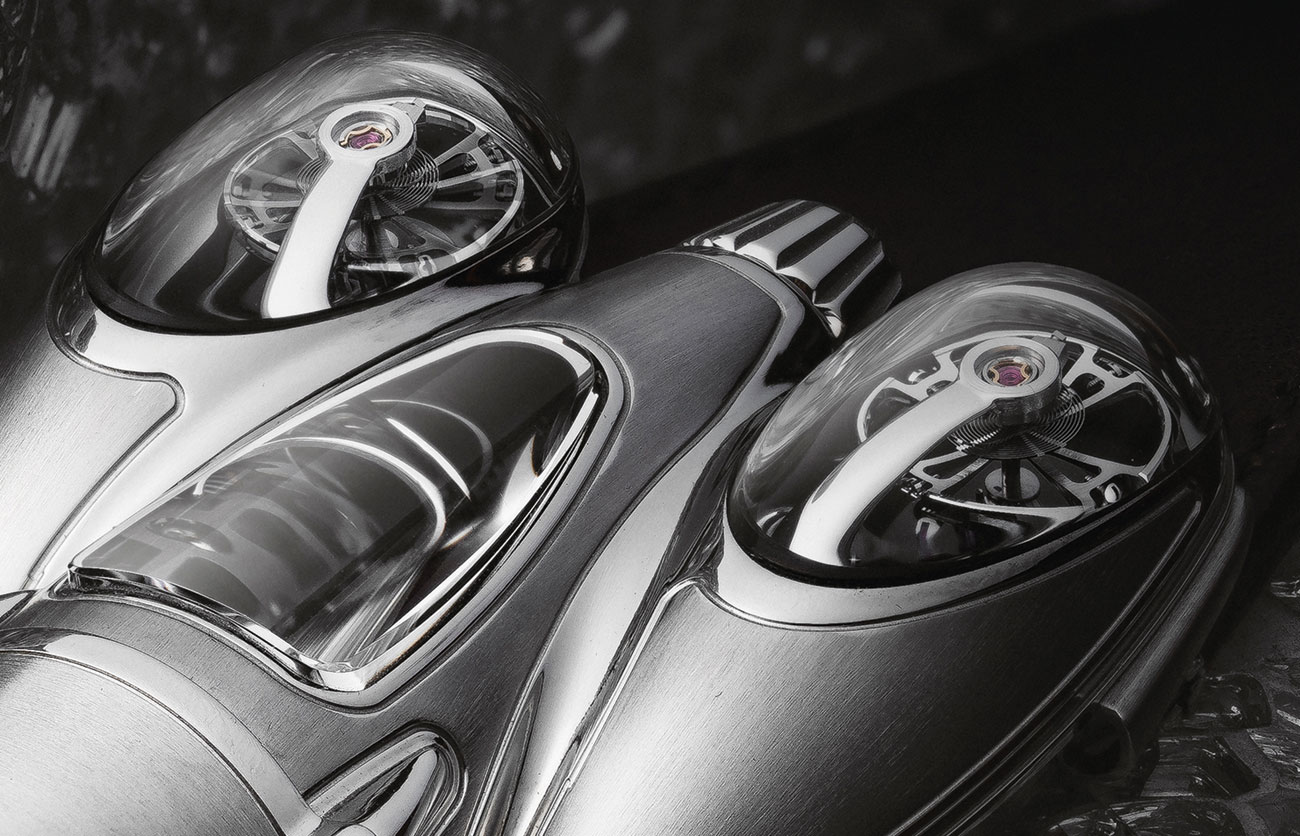 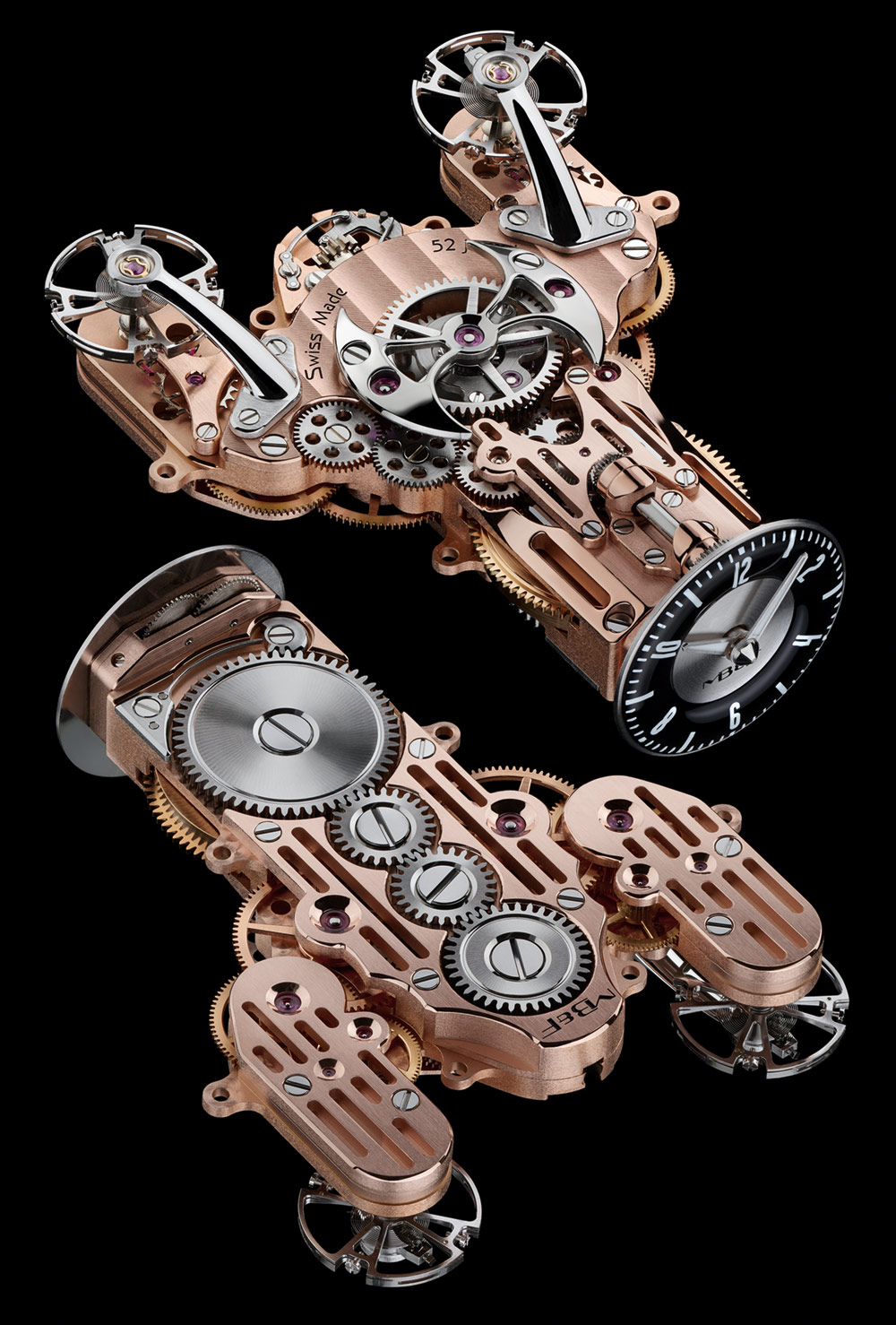 The movement is produced from 301 parts being manually-wound with 45 hours of power reserve, operating at 2.5Hz or 18,000 bph (for each balance wheel). Artistic features abound including the carefully hand-polished balance wheel arms (reminiscent of MB&F Legacy Machine models) as well as details such as the MB&F battle axe-style logo. A unique conical gear system is nicely visible and was developed so as to power the horizontally displayed dial for telling the time. As stated above, the two MB&F HM9 Flow model movements will differ slightly as the HM9 Flow Air will be in a dark gray color while the HM9 Flow Road will be rose-gold plated for a different color. 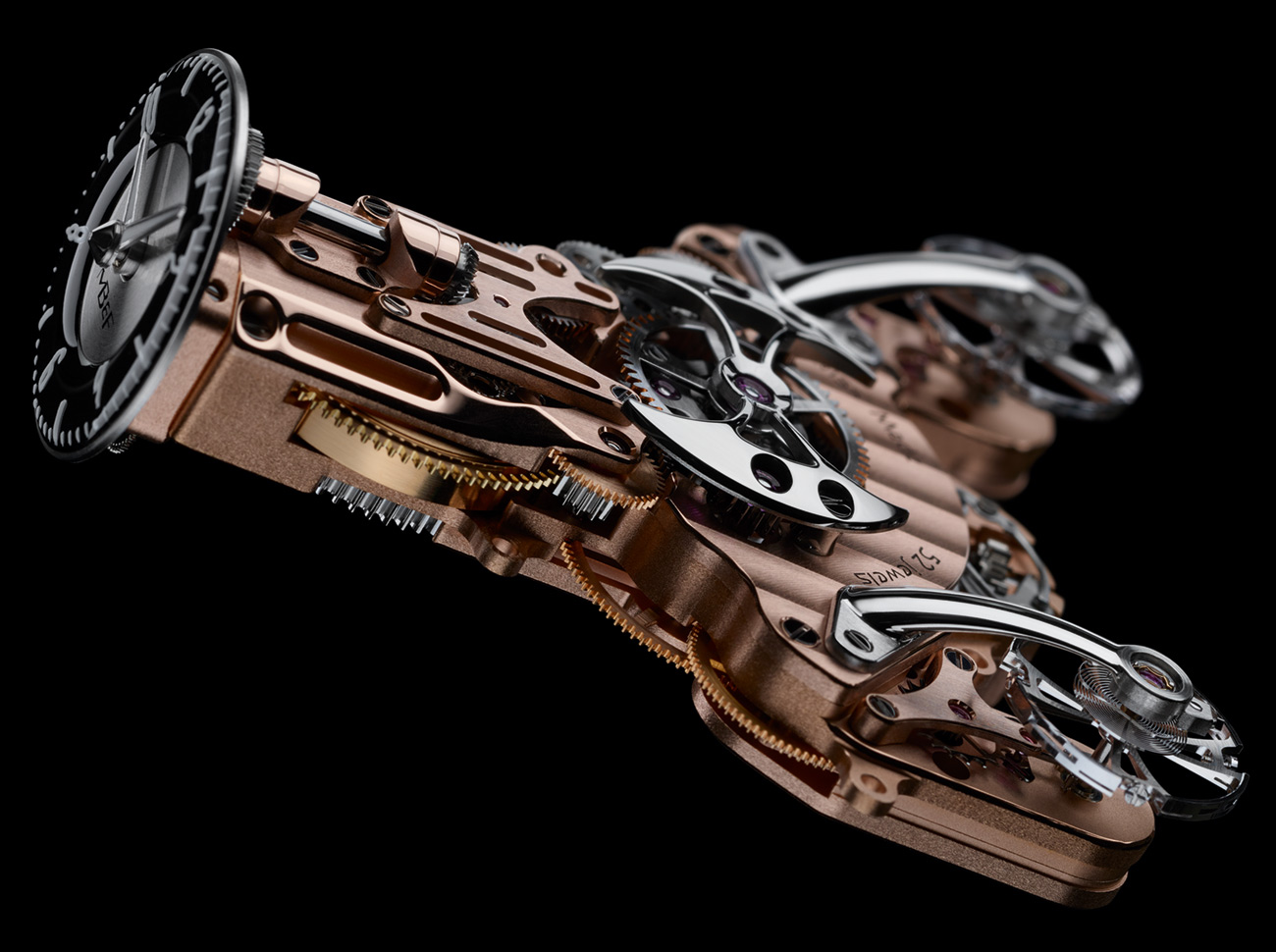 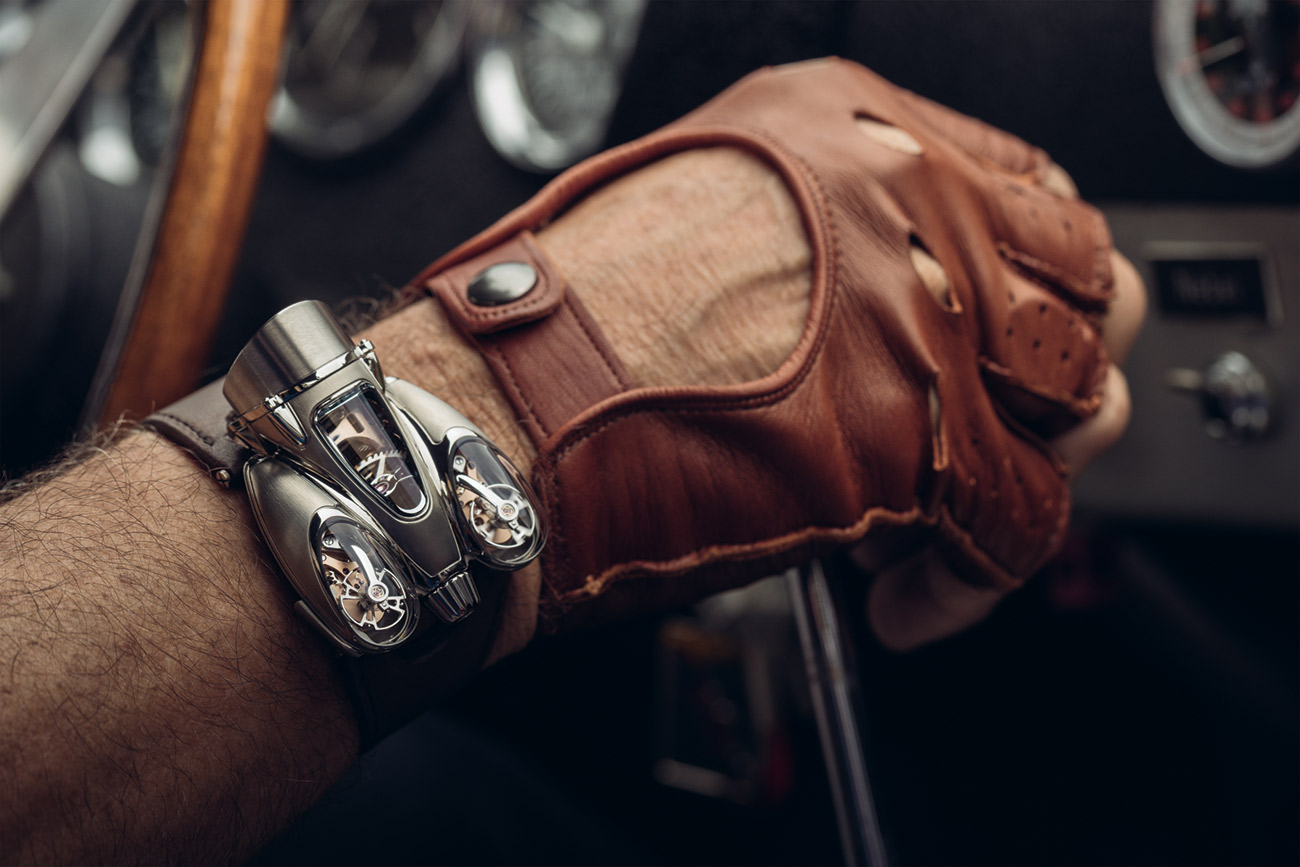 On the wrist, I imagine that the MB&F HM9 Flow will wear very much like the MB&F HM4. That is, a side-displaying watch that looks like some type of a plane sitting on your wrist. Don’t forget that the MB&F HM5 also had a side-style display – though that was more automotive “driver’s watch” inspired. The MB&F HM9’s case is entirely titanium, which includes a series of curved sapphire crystal windows. MB&F makes a point to discuss the wearability of the HM9 case, which could just as easily be super comfortable as it might be super uncomfortable given the strange design. MB&F is proud to have sized the package in a compact 47mm wide, 23mm thick, and 57mm lug-to-lug case. I very much look forward to putting one of these on my wrist. The case is water-resistant to 30m and is produced from 43 parts itself. Attached to the case is a custom-made brown calf leather strap. 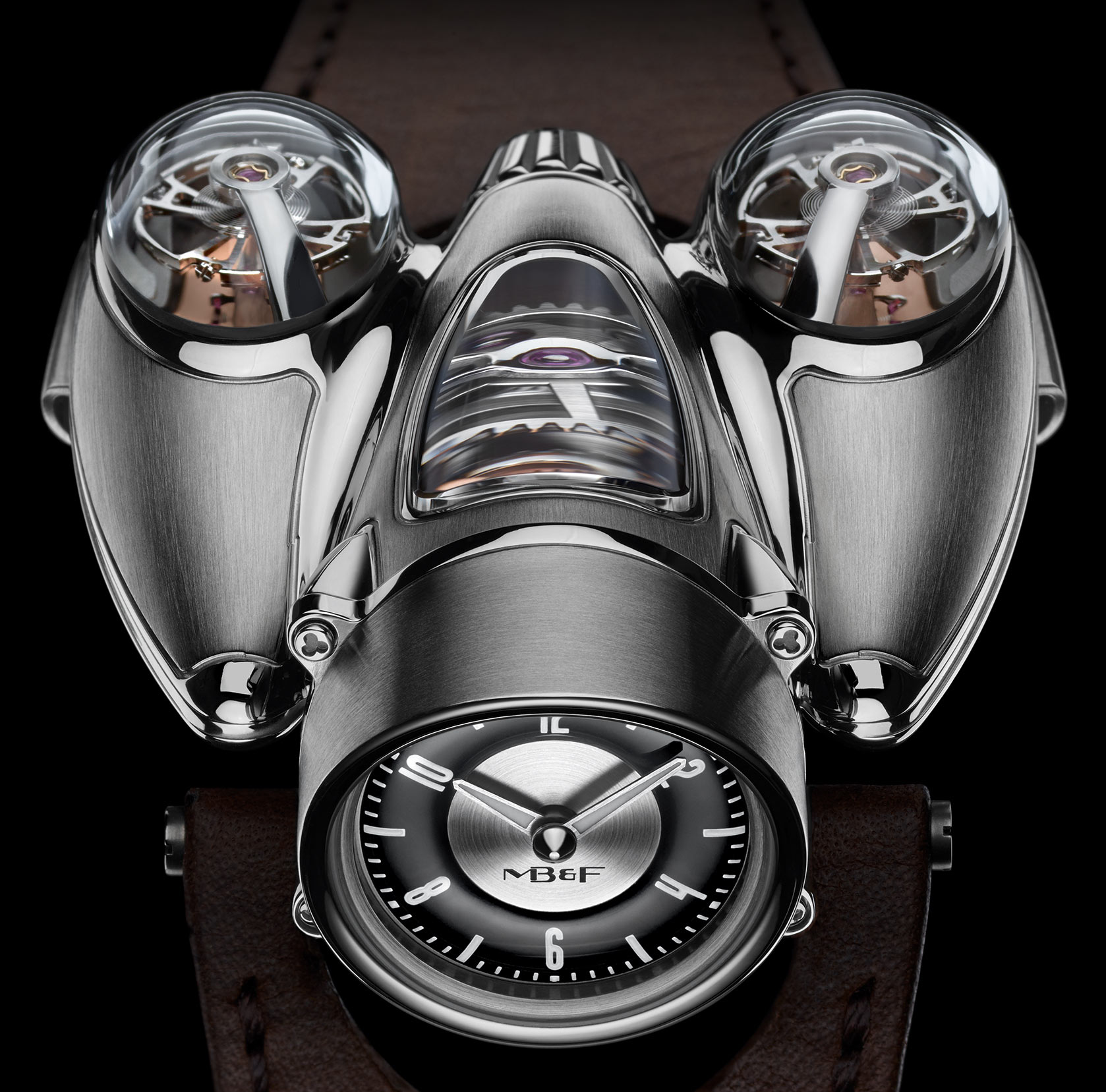 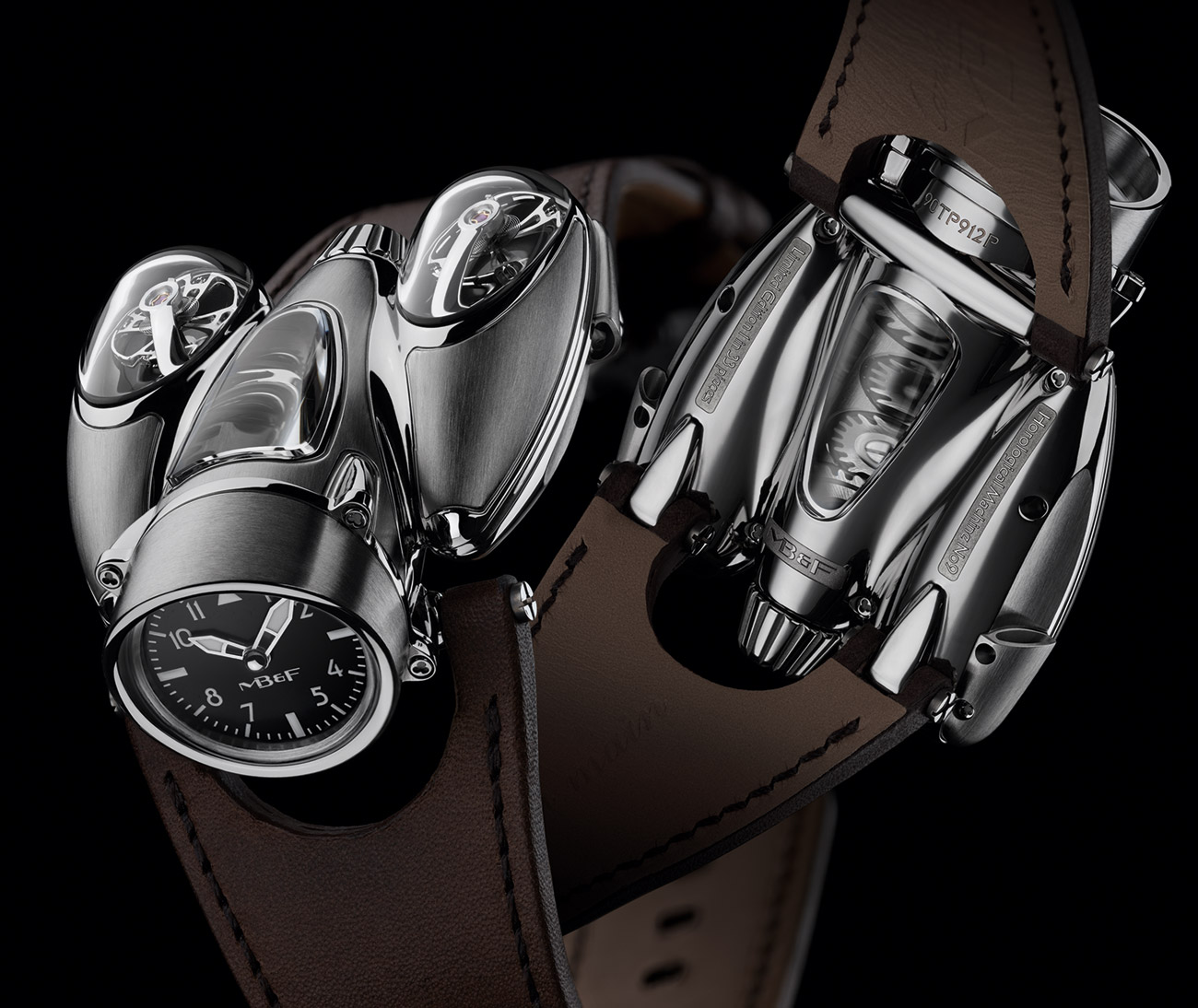 I have a feeling that the MB&F Horological Machine No. 9 Flow is going to be more interesting in person than in formal marketing shots. With that said, like many MB&F products, its appeal is going to be a matter of taste. Technically and structurally, most watch lovers agree that MB&F has it all, but given the niche nature of the designs, we know that some will love the HM9 and others will not find its aesthetic design to their taste. Then again, this initial set of HM9 watches is just 66 pieces, and I don’t think MB&F will have any trouble finding immediately-ready takers. Once again, MB&F will produce 33 pieces of each of the limited edition MB&F HM9 Flow Air and the HM9 Flow Road. Price for each is $182,000 USD. mbandf.com