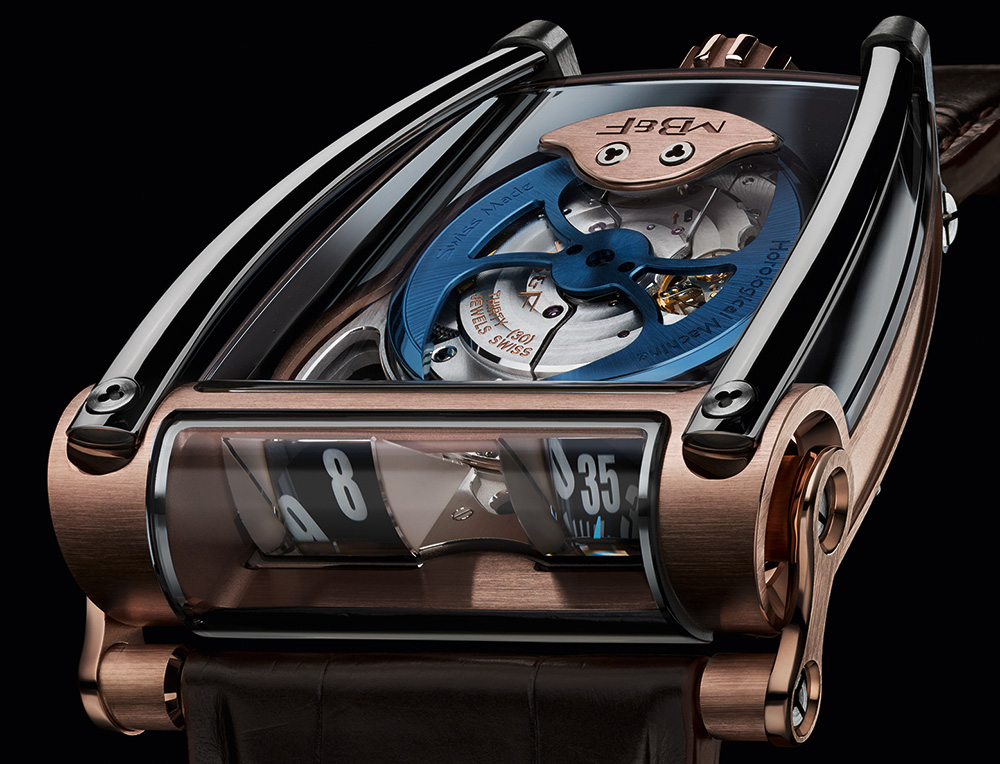 As a leader in controversial, avant-garde Swiss haute horology, MB&F has set the bar high for shocking wrist-art releases. So a new Horological Machine from MB&F is always kind of an “event” in the watch world, and today we greet the MB&F HM8. If you are new to watches and this is the first MB&F you are seeing, your head might be exploding a little bit right now, but those who know the brand will recognize a host of familiar elements found in the MB&F HM8 Can-Am. The MB&F HM8 Can-Am is the evolution and refinement of a concept, but as always, MB&F gives us a lot to look at and talk about. 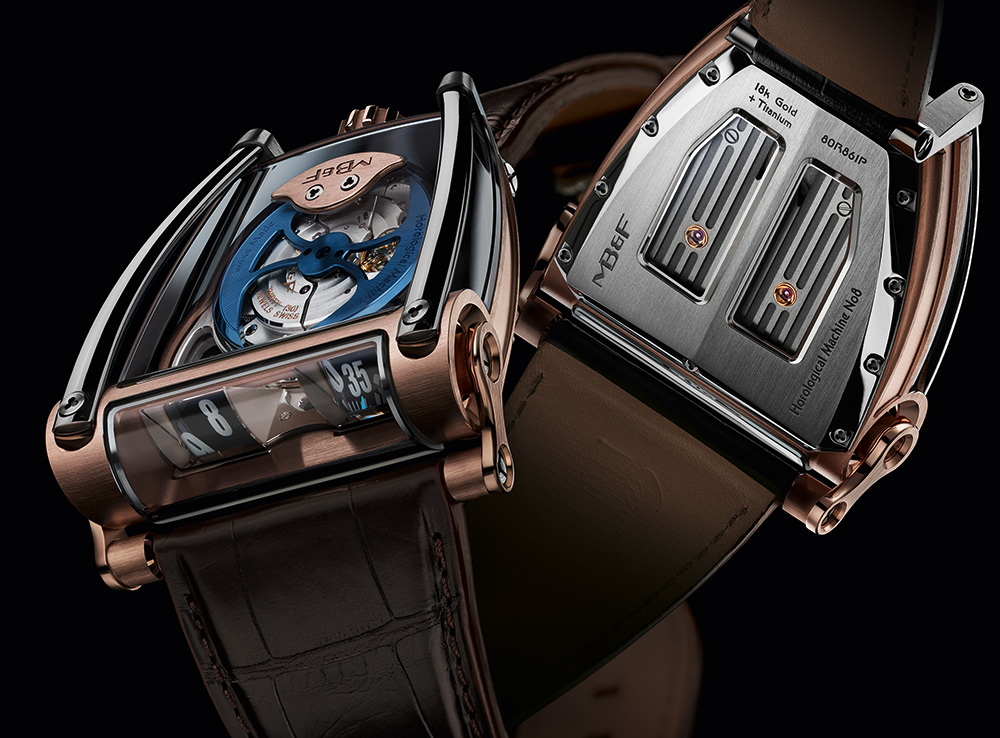 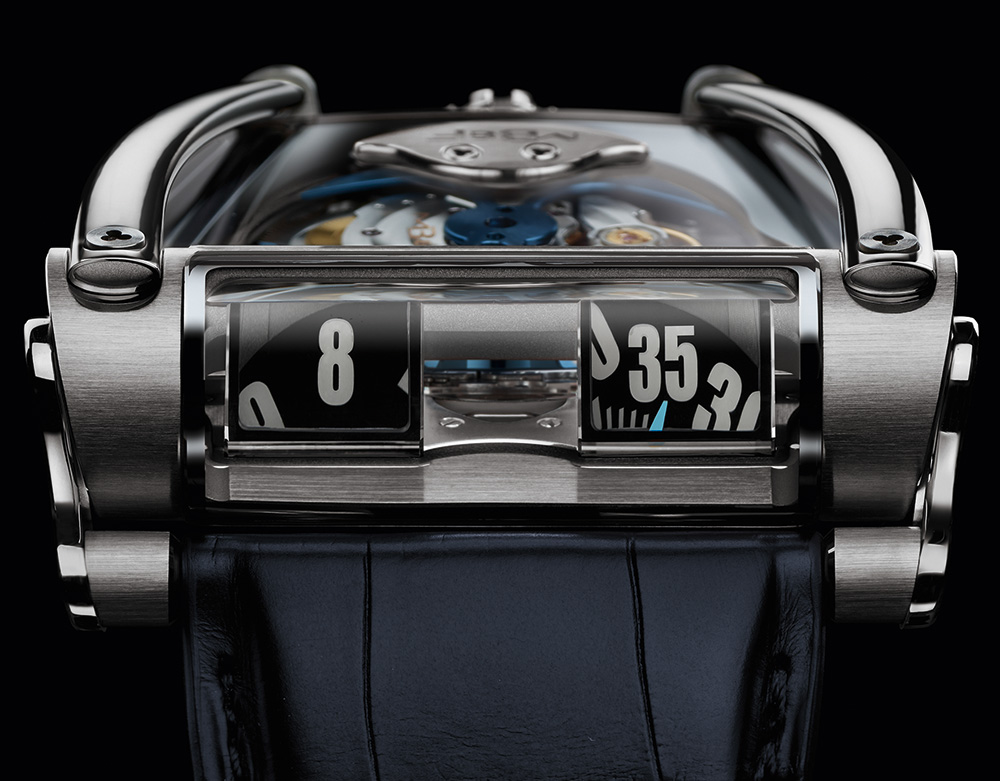 More horological art than anything else, MB&F makes extremely avant-garde and high-end watches, as well as crazy mechanical clocks and even music boxes sometimes. Their Horological Machines are often sci-fi-inspired and push the boundaries of what can even be called a wristwatch; while Legacy Machines (LM) are also avant-garde and over-engineered but more classically recognizable as watches. In just over ten years of the brand’s existence, it is impressive the number of times they have been able to not only defy conventions and expectations, but do so successfully. The HM8 is chronologically the eighth member of the Horological Machine family, though it is preceded by the HMX (X for ten, released in 2015 on the brand’s tenth anniversary), and there is no “HM7.” But I am not one to get too hung up on names.

…We won’t get hung up, but we must at least mention the Can-Am part of the name as it relates to the design theme. Can-Am is short for the Canadian-American Challenge Cup, a car racing series that existed from 1966 to 1987. The frame found on some cars meant to protect the driver in case the car rolls over is referenced by the MB&F HM8 Can-Am’s titanium “roll bars.” So, yes, count this among the endless stream of “automotive-inspired” watches that seem to come from every corner of the watch industry lately. I am mostly here to talk about watches, though, so you can learn more about Can-Am racing at the Wikipedia link above. The first thing that came to mind for me, actually, was my cousin’s Polaris Slingshot (it’s true)… When will we see a watch for that? 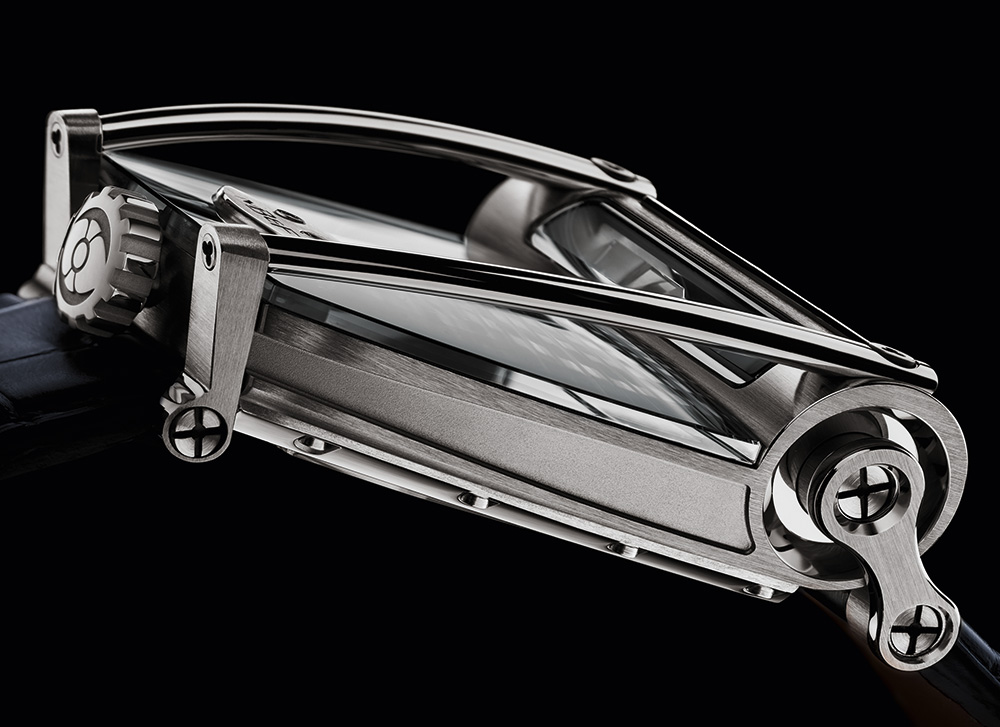 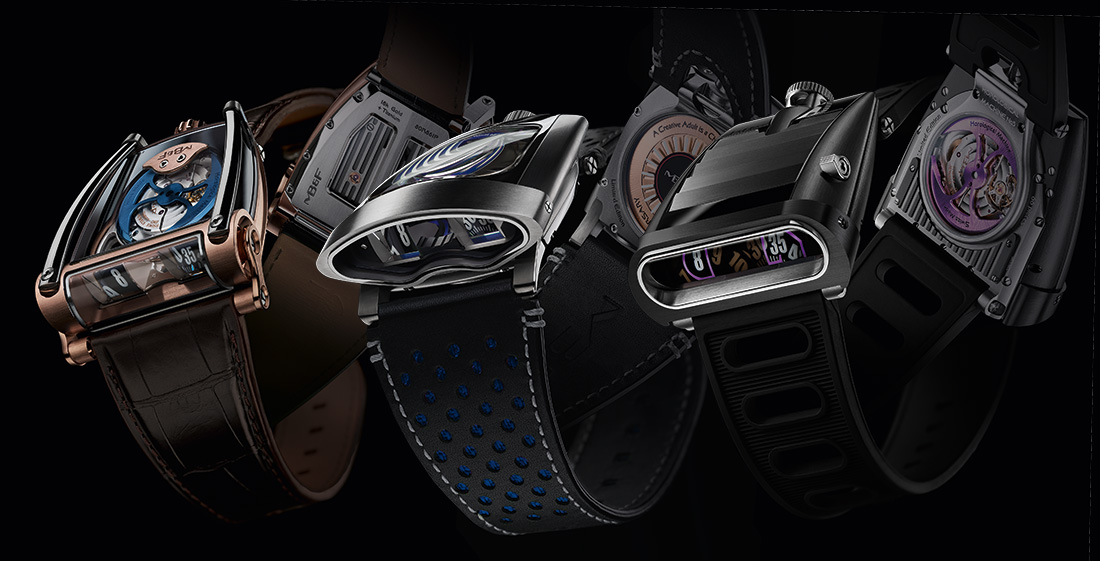 What is most new and notable for MB&F about the MB&F HM8 Can-Am is its complicated case, made from 60 components in gold, titanium, and sapphire crystal. It is impossible to escape the observation that the MB&F HM8 Can-Am watch is a direct evolution of the HM5 introduced in 2012 (aBlogtoWatch review here) and later the HMX. The MB&F HM5 is a “driver-style” watch, meaning it displays the time on the side of the wrist rather than on top – apparently, so it is easy to reference when driving without removing one’s hand from the steering wheel.

Like the HM5, the MB&F HM8 Can-Am uses two discs for the hours and minutes that are horizontal in relation to the movement’s orientation. The time is then displayed vertically to face the wearer using sapphire crystal prisms, and a convex lens provides magnification. Partially visible from the top of the watch, it is fun to notice that the numerals on the discs are written backwards so they display correctly when reflected. 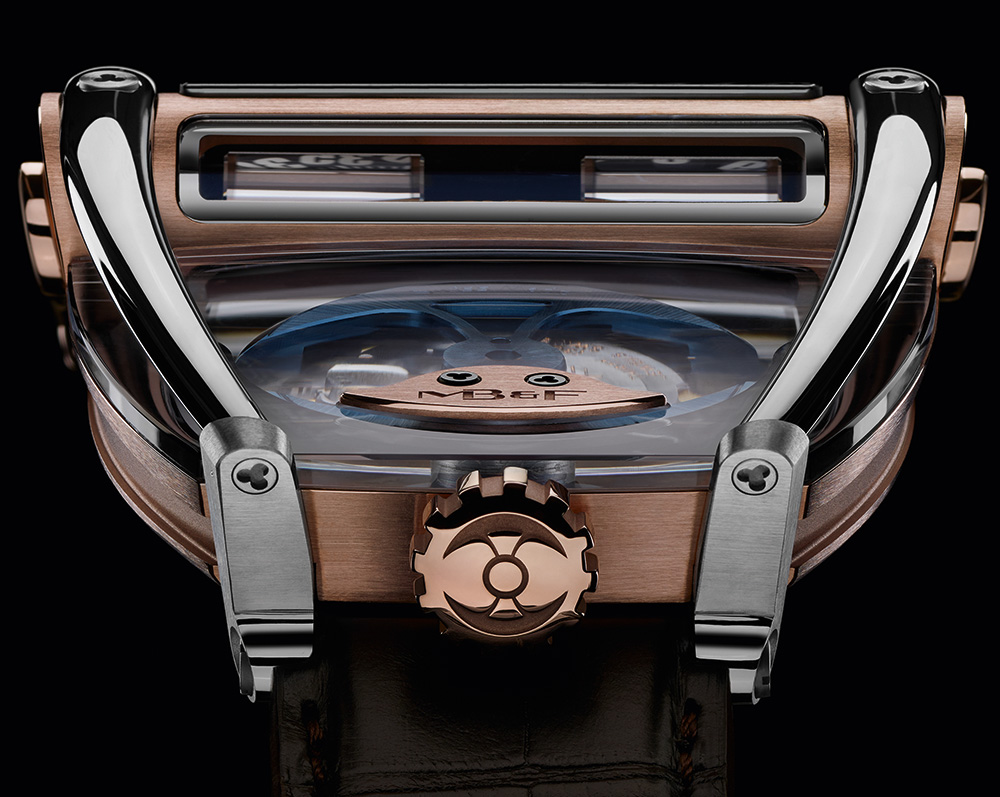 The sloping wedge shape of the MB&F HM8 Can-Am’s profile is also carried over from its thematic predecessors. The case of the MB&F HM8 Can-Am, however, is angular and flat, with the two “roll bars” forming the familiar shape – just as how race cars’ roll bars mimic the lines of a roof. Maybe this titanium frame will actually provide some protection in the case of bang, but then you will likely have scratches on your $80+ watch – as titanium does scratch. With what appear to be articulating lugs, the 49mm × 51.5mm × 19mm dimensions should attract a lot of wrist attention, but still be within the bounds of what is wearable for most wrist sizes. 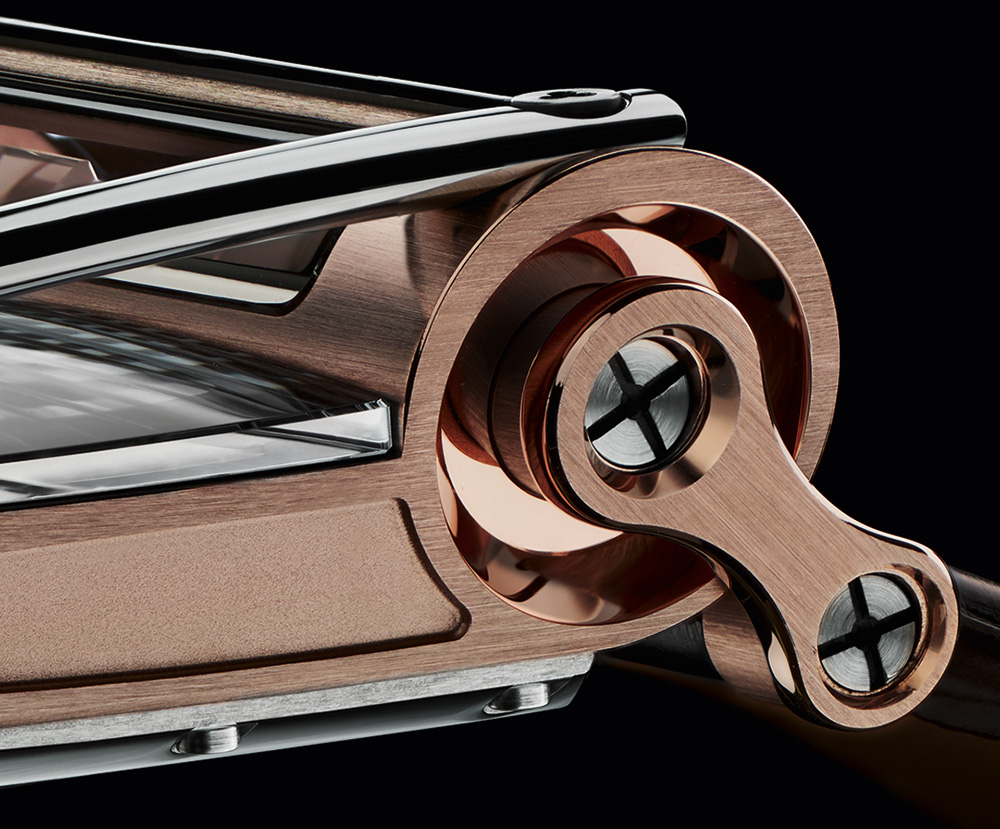 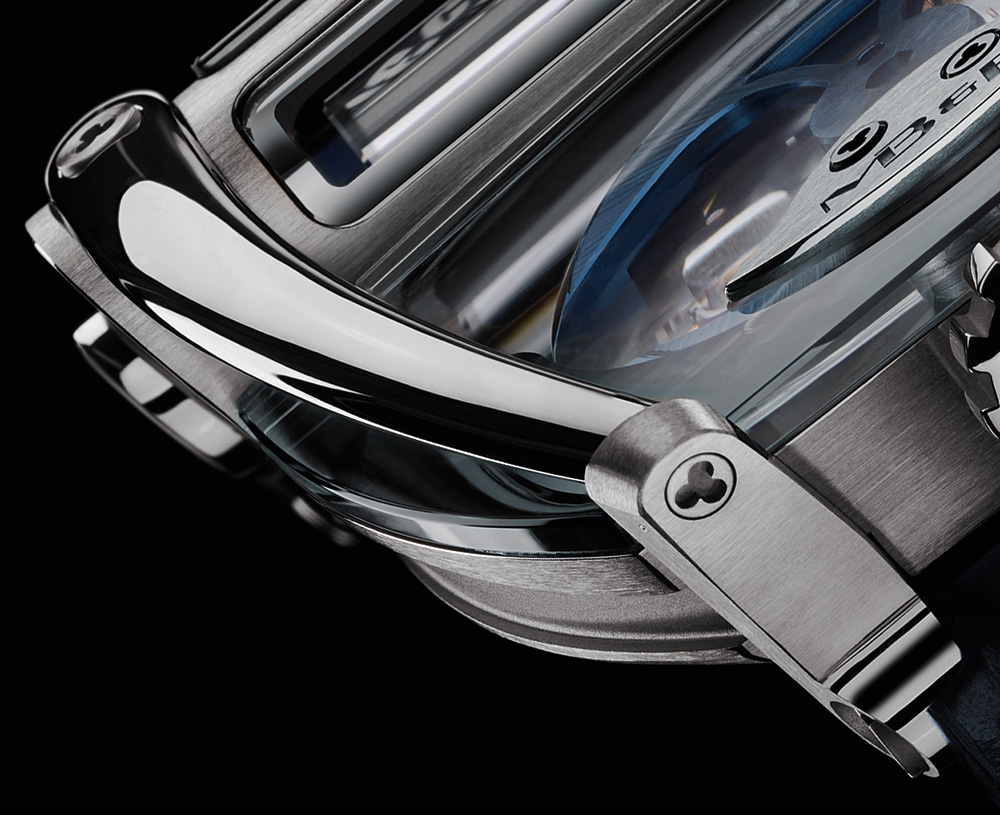 Another prominent feature of the MB&F HM8 Can-Am is the movement view provided by a large sapphire crystal on the front of the case. Conceived and developed by MB&F, the “Engine” is based on a Sowind (Girard-Perregaux) movement very similar to that found in the HM5 watches. This time, however, it is flipped upside-down and visible from the front of the watch – a view that is usually relegated to casebacks, with the brand’s signature “battle axe” rotor shape in blued gold. Again, we’ve seen the movement displayed more or less this way on MB&F watches before. The 247-component movement runs at 4Hz and provides an unremarkable 42 hours of power reserve. The hours “jump” and can be adjusted in both directions. On the caseback, we can find two “oil sumps,” apparently, in another automotive reference. 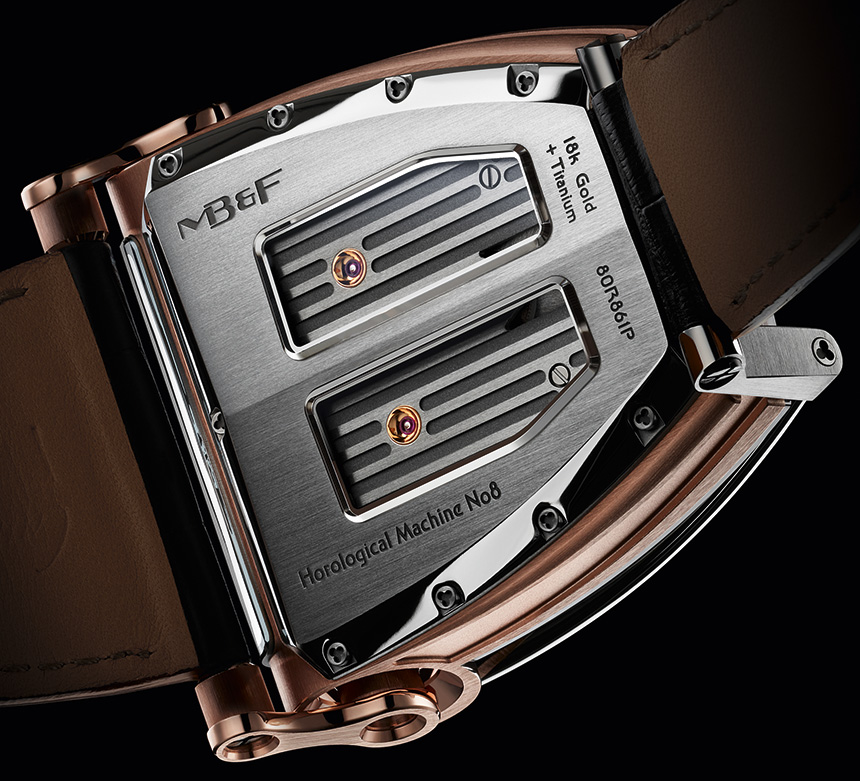 The hour and minute discs are partially visible through the sapphire top of the case. Unlike the HMX Black Badger Editions (hands-on here) that glow perpetually without the need of any external light source, the disks here are completely coated in Super-LumiNova and then masked out to form the shape of the numbers. Since the discs appear to be mostly covered most of the time, though, it is not clear how they will be sufficiently charged to view in darkness (especially the minutes). 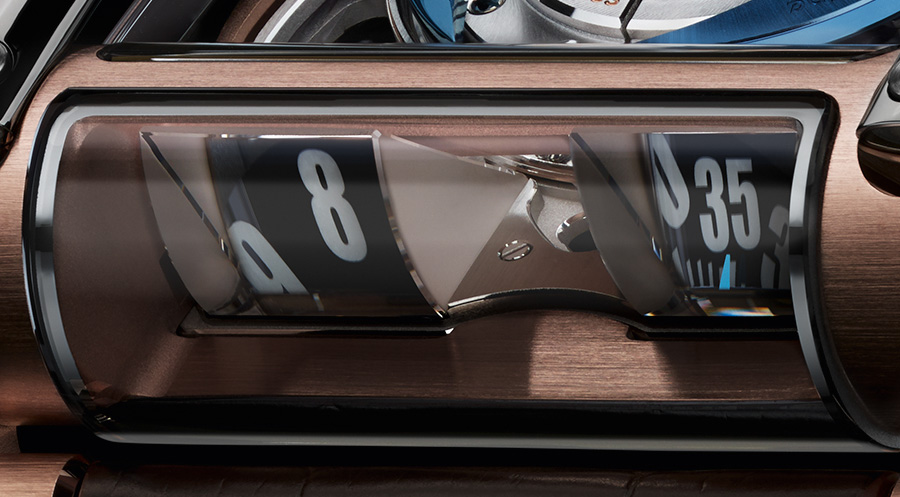 Little about the MB&F HM8 Can-Am is new apart from the case that is like a skeletonized watch in concept, designed to showcase the movement. To me, what MB&F does best is completely wild concepts, highly refined. And, while not their craziest design, the MB&F HM8 Can-Am displays refinement in its design and finishing, and even elegance in its architectural case structure and curves. The MB&F HM8 Can-Am launches with two versions, one in rose gold and titanium, and one in white gold and titanium. I’m not sure if the MB&F HM8 Can-Am’s price of $82,000 also makes you Maximilian Büsser’s “friend” – but seriously, it is appreciated that the brand credits by name the many individuals who are part of creating each product. mbandf.com