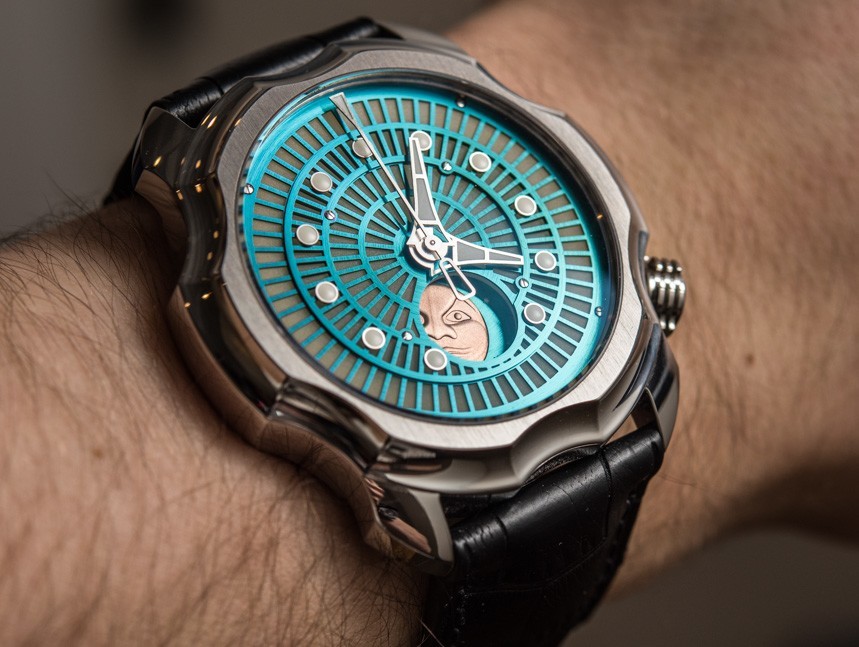 In an age of proprietary escapement designs, multiple-axis tourbillons, and space-age case materials, luminant remains an element in modern watchmaking that can – and should! – be improved upon. If you have seen good, bright, colorful lume, you too felt how your feet elevated from the ground when glancing upon this remarkable spectacle and how your life in its entirety had taken a completely new direction… and if not that, chances are, you still very much enjoyed the vibrant glow, and would want it to glow even brighter, longer, and more colorfully. This is where the Stepan Sarpaneva Korona K0 Northern Lights watch comes in. Sure, some may argue that lume is nothing more than a mere necessity – say, when it comes to proper dive watches – but I would say it is much more than that. It is a superb tool for watchmakers to add new colors or highlight different design elements and hidden features on watches. So we have been wondering why there are so few brands who dare to think out of the box and use luminescent paint more creatively.

For the Sarpaneva Korona K0 Northern Lights watch, Sarpaneva used his Korona K0 dive watch(-ish) design, with a massive 46 millimeter wide, beautifully crafted stainless steel case and a DLC-coated, laser-cut, skeletonized dial, only to set it alight in the dark by using a proprietary luminescent material. That material is the result of a collaboration between Black Badger (based in Sweden and run by James Thompson) and a Canadian company called Ambient Glow Technology. “Black Badger and Ambient Glow Technology” – sounds like a promising collaboration! And indeed, the two have created a new, proprietary luminescent material that – as opposed to the super thin painted surfaces – is a solid piece of luminescent material that can be milled and shaped in many ways, creating solid, glowing blocks. Thompson and Sarpaneva first met last year at SalonQP in London, and the two quickly decided to work on a new project together. That project became the Sarpaneva Korona K0 Northern Lights, named after that fabulous looking natural light display in the sky that is predominantly seen in the high latitude (Arctic and Antarctic) regions – such as those from which the various parties involved in the Sarpaneva Korona K0 Northern Lights watch hail. Because we are looking at a solid – and as I understand, entirely glowing – material that can be relatively freely cut and formed, the lume it provides is second to none. Forget about anything you have ever seen, as not even the thickest layer of paint could compete with what is a block of luminescent material that appears to emit the “Radar Green,” “Aqua Blue,” or “Purple Reign” glow from deep inside of it. After charging for just a few seconds with a UV lamp, the lume of the dial background, as well as the hands and indices run at full power, providing a glow that was visible even with ambient lighting on – although, of course, not as bright as when viewed in the dark.

To give you an idea of how bright it is, when we finally got to see these pieces on the afternoon of our very last full day at Baselworld 2015, the three of us – James Stacey, Ariel and myself – just couldn’t stop charging the lume and taking pictures in what was an improvised tent made up from catalogues and whatever else we could find laying around. As we were oohing-and-aahing, Stepan just quietly smiled and endured what must have been one of the most enthusiastic (childish? – maybe) reactions to his latest creations. We found it extremely difficult to put these down (let alone hand them back to their maker) and stop admiring the exciting vibrance of the new Sarpaneva Korona K0 Northern Lights. As noted, the lumed dials are available either in green, light blue or purple colors, while the hands and indices are in all instances green. The first two options are sold with a polished stainless steel case while the latter, purple, is available in a black DLC coated steel case. All components are, of course, of very high quality, with my – and probably most everyone’s – favorite part being the skeletonized “upper dial” and the trademark “Moonface” phase of the Moon indicator of Sarpaneva, exposed on a large opening at the 6 o’clock position. The movement inside is a Soprod A10 modified by Sarpaneva, replacing the date display with his moon phase indication – it, of course, takes a different gearing, with 29.5 days of of the moon phases replacing the 31 positions of the date. The back has a full-sized rotor that has been skeletonized in a way that matches the dial and features added weight and another coin of the Sarpaneva “Moonface” on one half. The crown is at the 4 o’clock position of the case, making the 46-millimeter wide – and relatively thin – case wear considerably smaller (and more comfortably) than spec data would suggest. The Sarpaneva Korona K0 Northern Lights put a huge smile on the faces of us three watch enthusiasts, who had a fantastic – and quite exhaustive – week of meetings and running around behind us. The Korona grabs a relatively basic element in watchmaking and brings it to a new level, enhancing it in just about every way we can imagine – and so what else to say but hats off to Stepan and the guys at Black Badger and AGT for that. The Stepan Sarpaneva Korona K0 Northern Lights is priced at 14,500 Euros, or about $15,700 in any of the three versions. sarpanevawatches.com