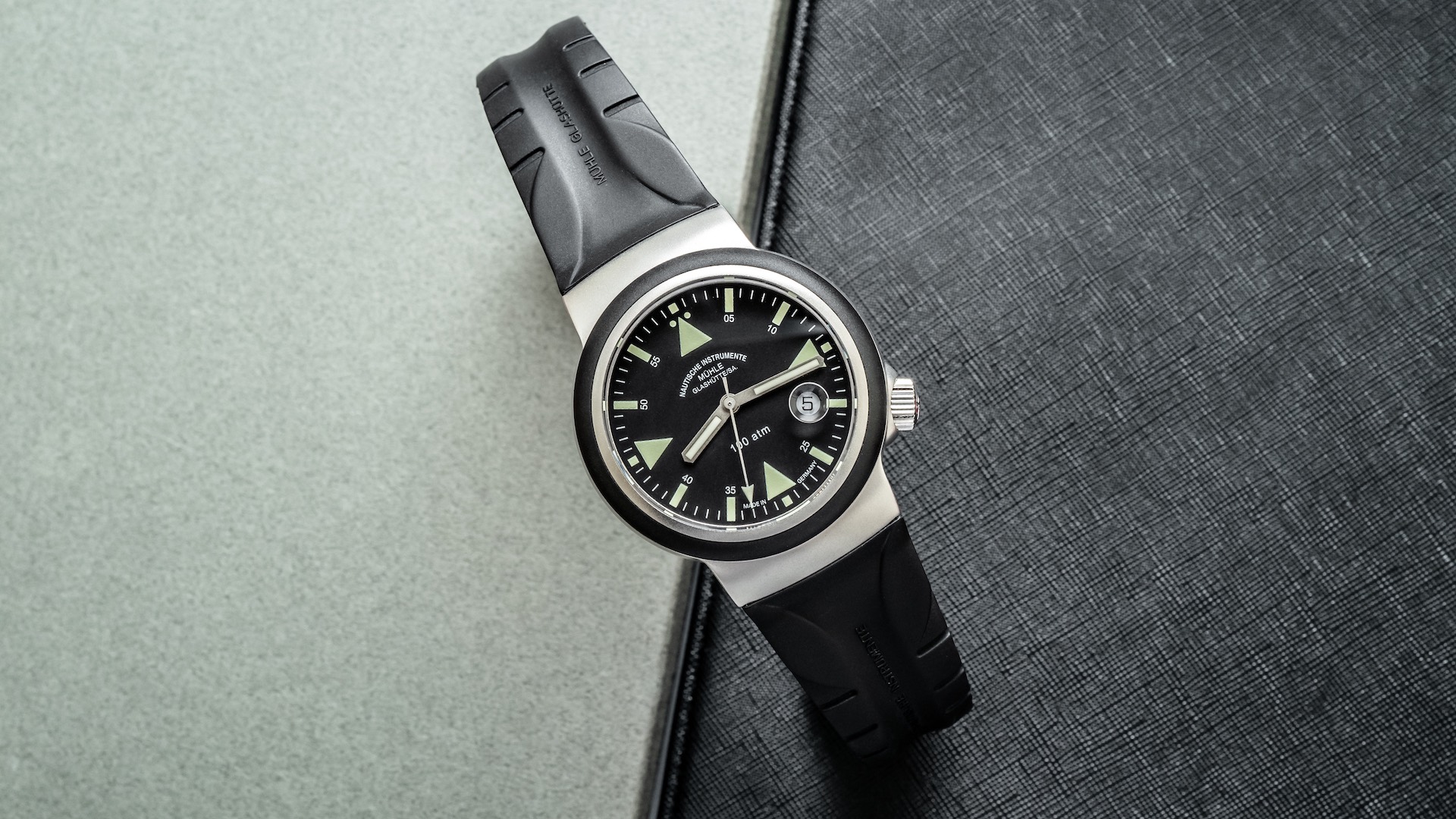 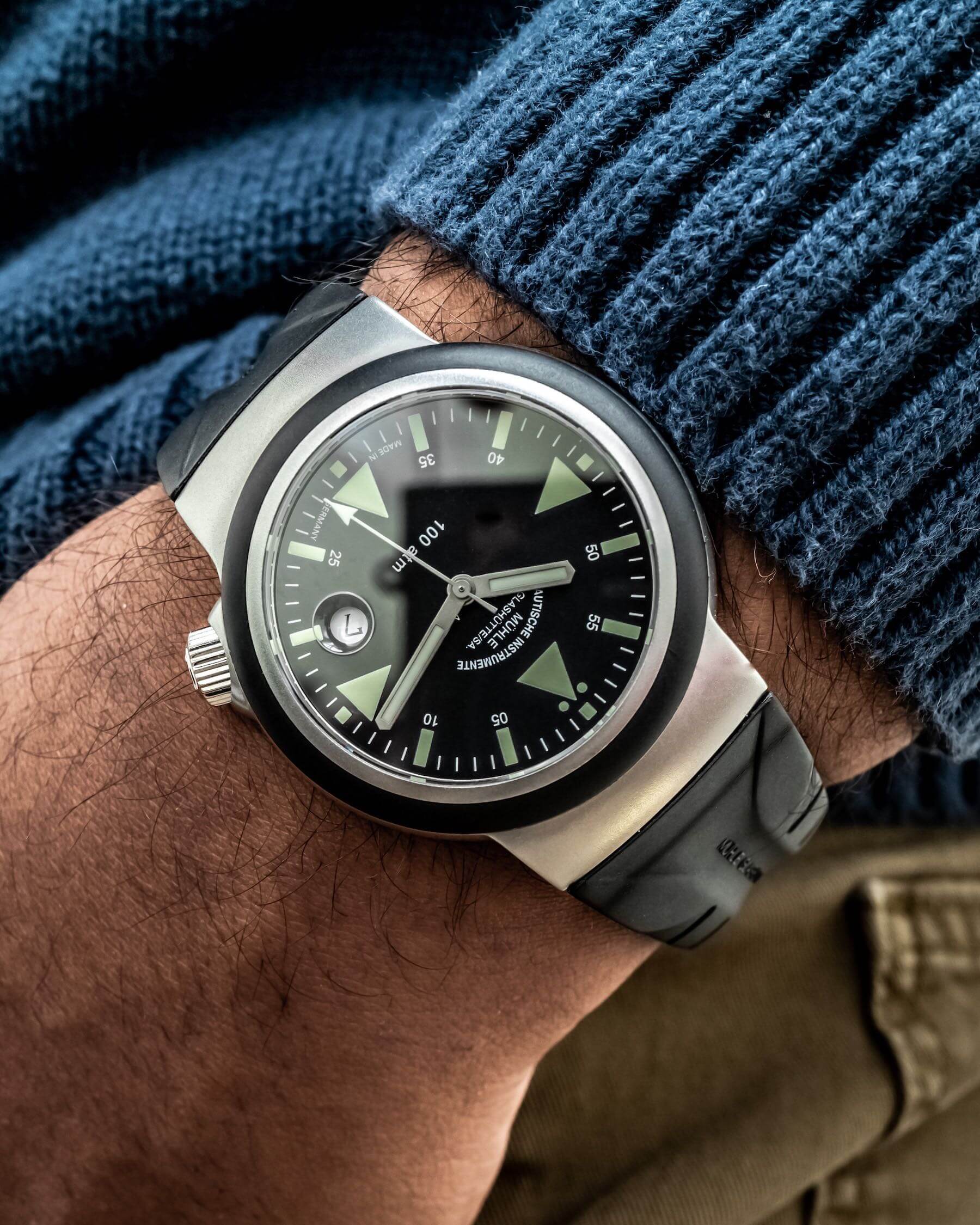 The roiling, tempestuous waters of the North Sea have a well-earned and fearsome reputation among the seafaring. Located between the British Isles and the Northern Europe, the North Sea is a major shipping route, but a treacherous one due to its unforgiving coastlines and formidable weather — including the largest wave ever recorded, a 25.6m behemoth measured in 1995. The North Sea has all the ingredients necessary to cook up the perfect recipe for shipwrecks and nautical disasters. When the worst invariably happens, the German Maritime Search and Rescue Association (DGzRS), with a fleet of 60 SAR cruisers and boats, is called to the scene. And strapped to their wrists during deployment on these life-saving missions is the Mühle Glashütte S.A.R. Rescue-Timer. Developed in collaboration with the DGzRS, the S.A.R. Rescue-Timer is purpose-built to withstand the exceptional rigors of rescues at sea. 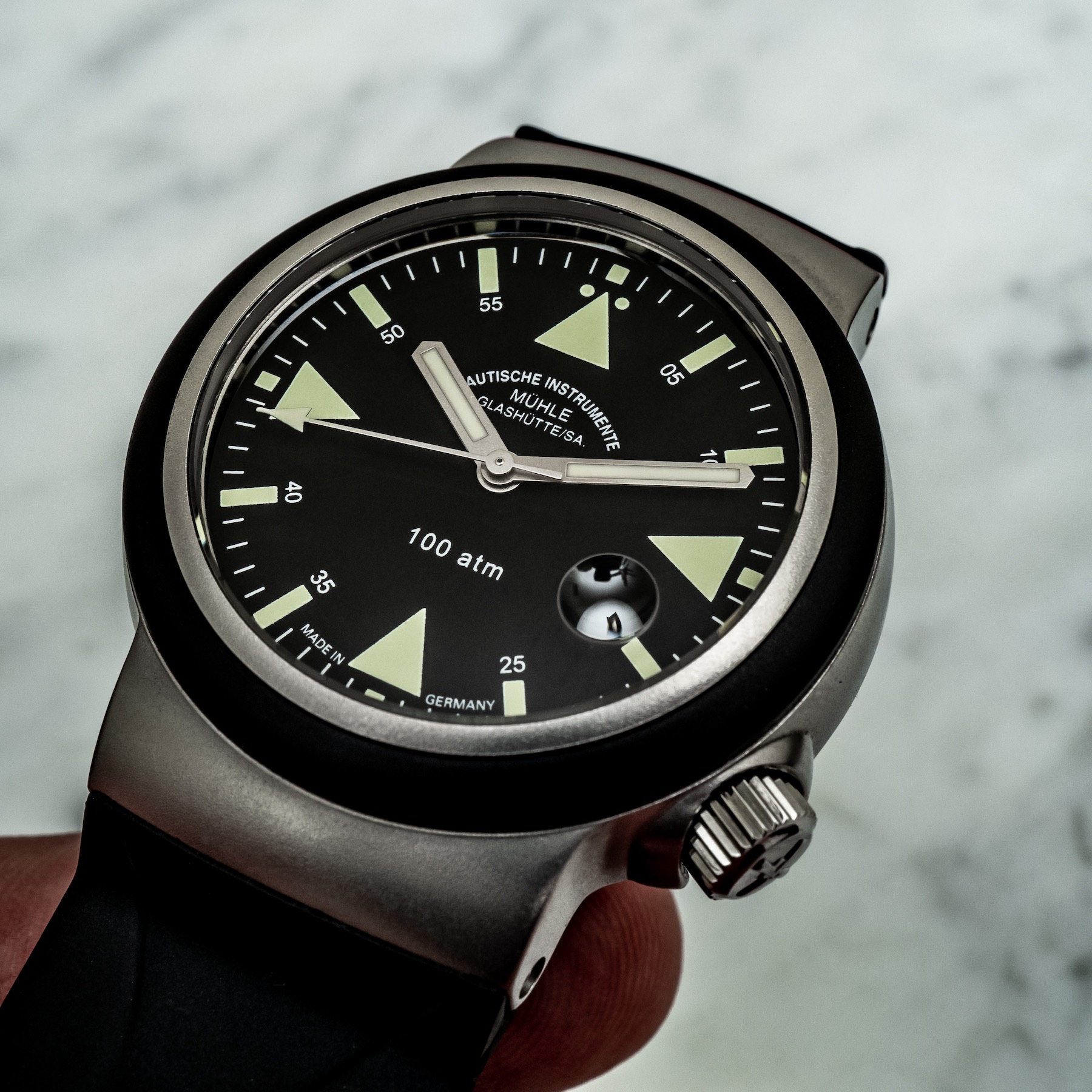 The S.A.R. Rescue-Timer features a 42mm stainless steel case with soft edges and rounded lines, a rubber bezel, elongated hooded lugs, and a 4 o’clock crown. The reasoning behind these design decisions is entirely functional: Safety is the top priority during search and rescue operations, and the goal is to minimize any chance of injury. The result is a case that is distinct and unmistakable. Adding to the robustness of the S.A.R. Rescue-Timer is a 4mm-thick sapphire crystal that contributes to the overbuilt 1000m water-resistance. Yet, this timepiece comes in at a relatively svelte 13.5mm height, making it easily wearable every day. 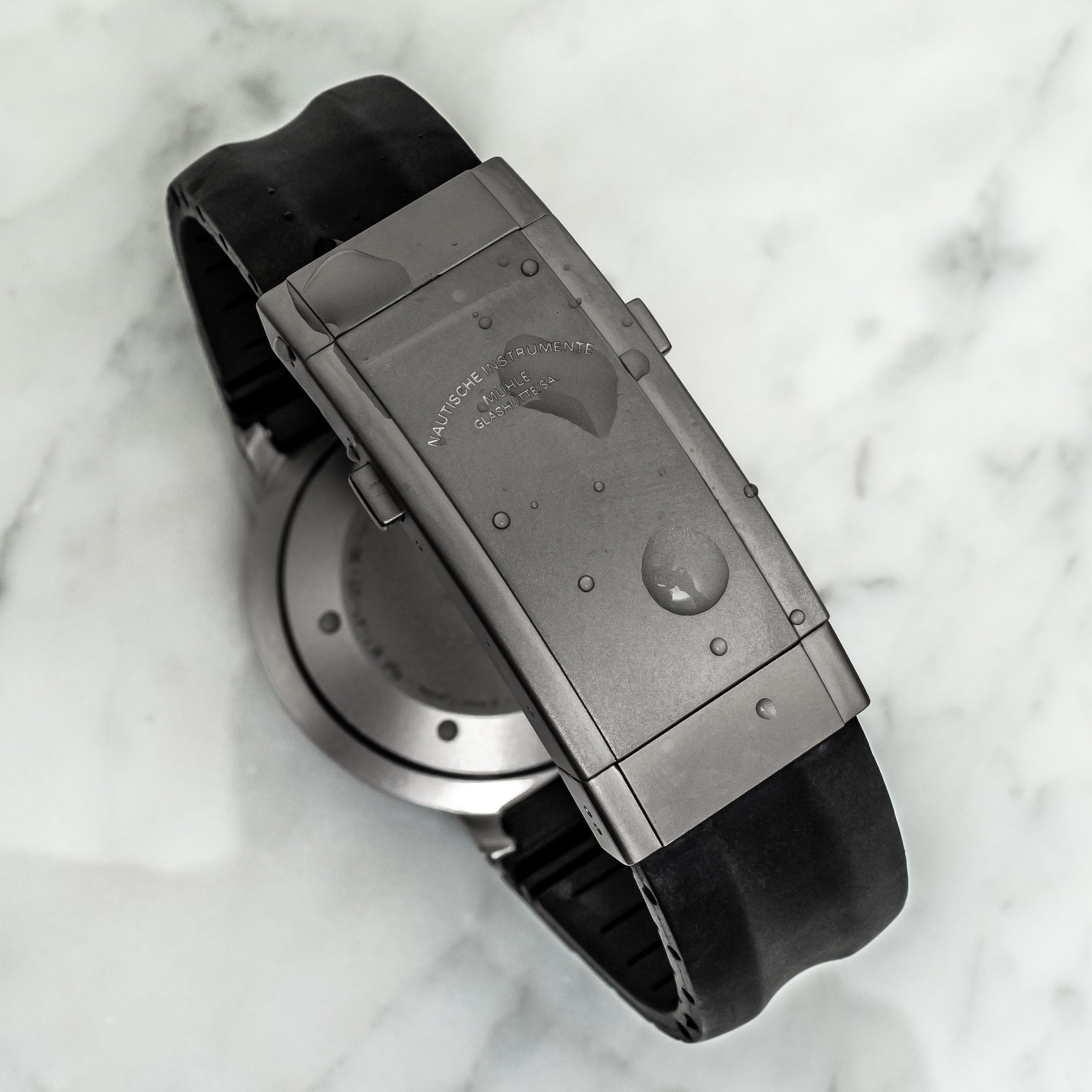 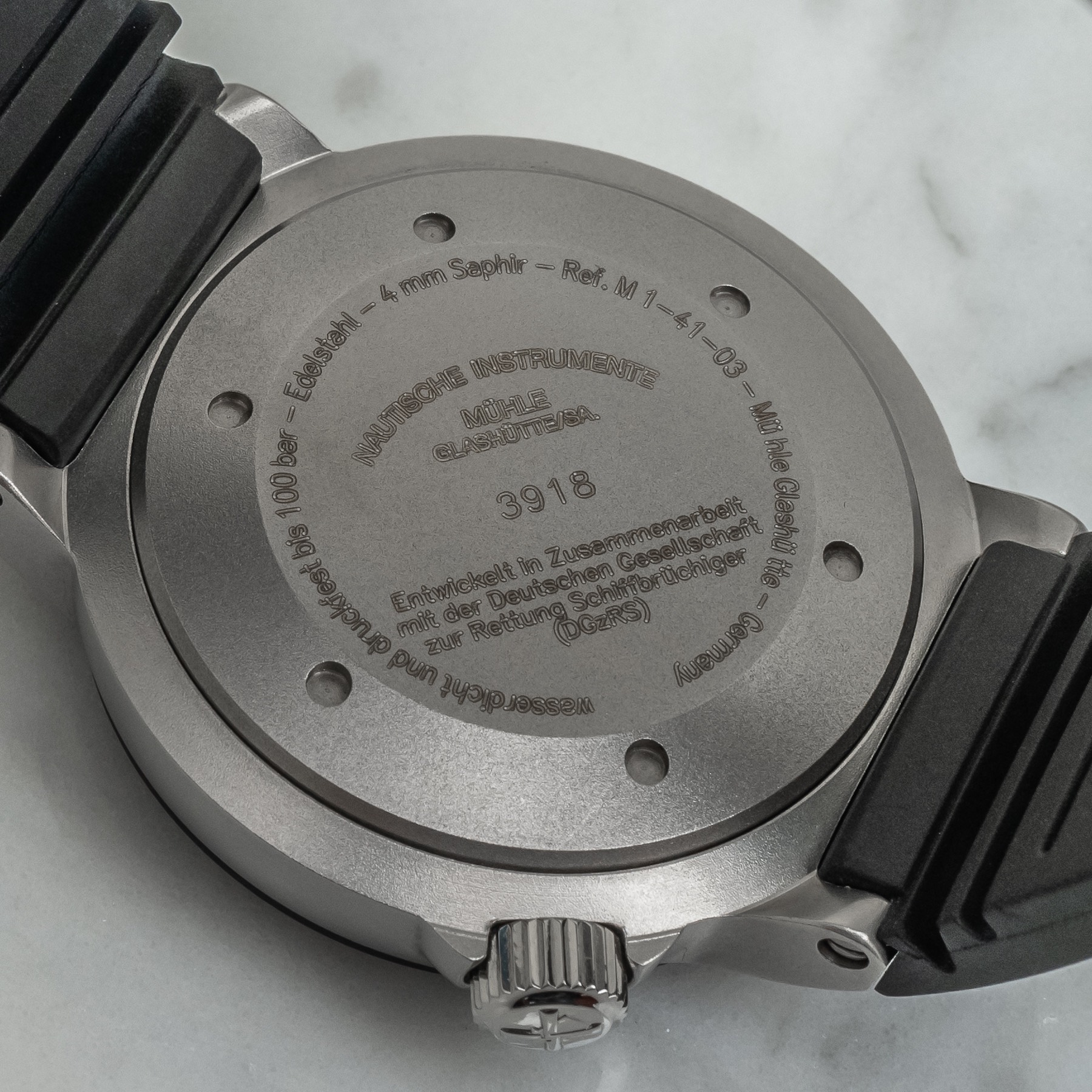 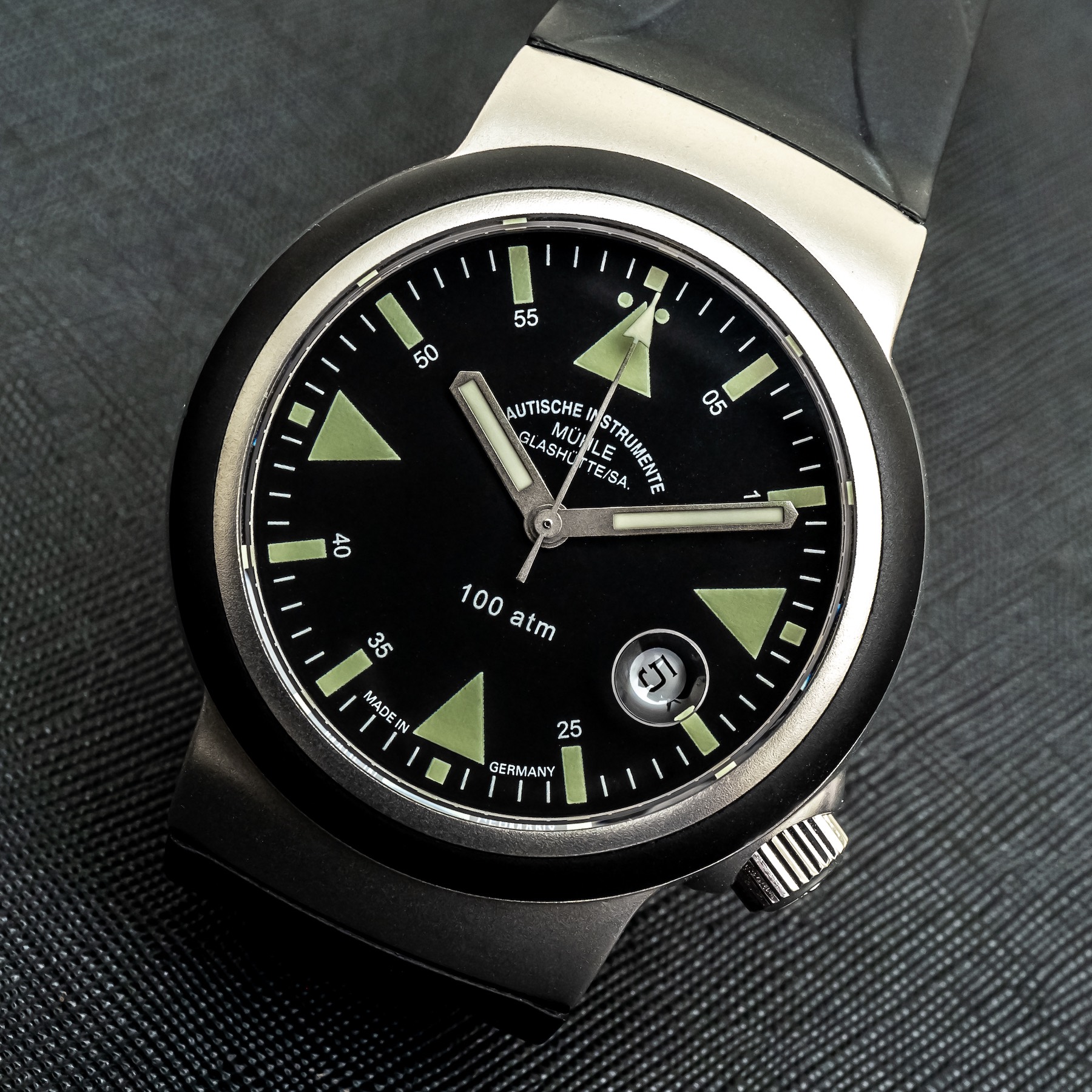 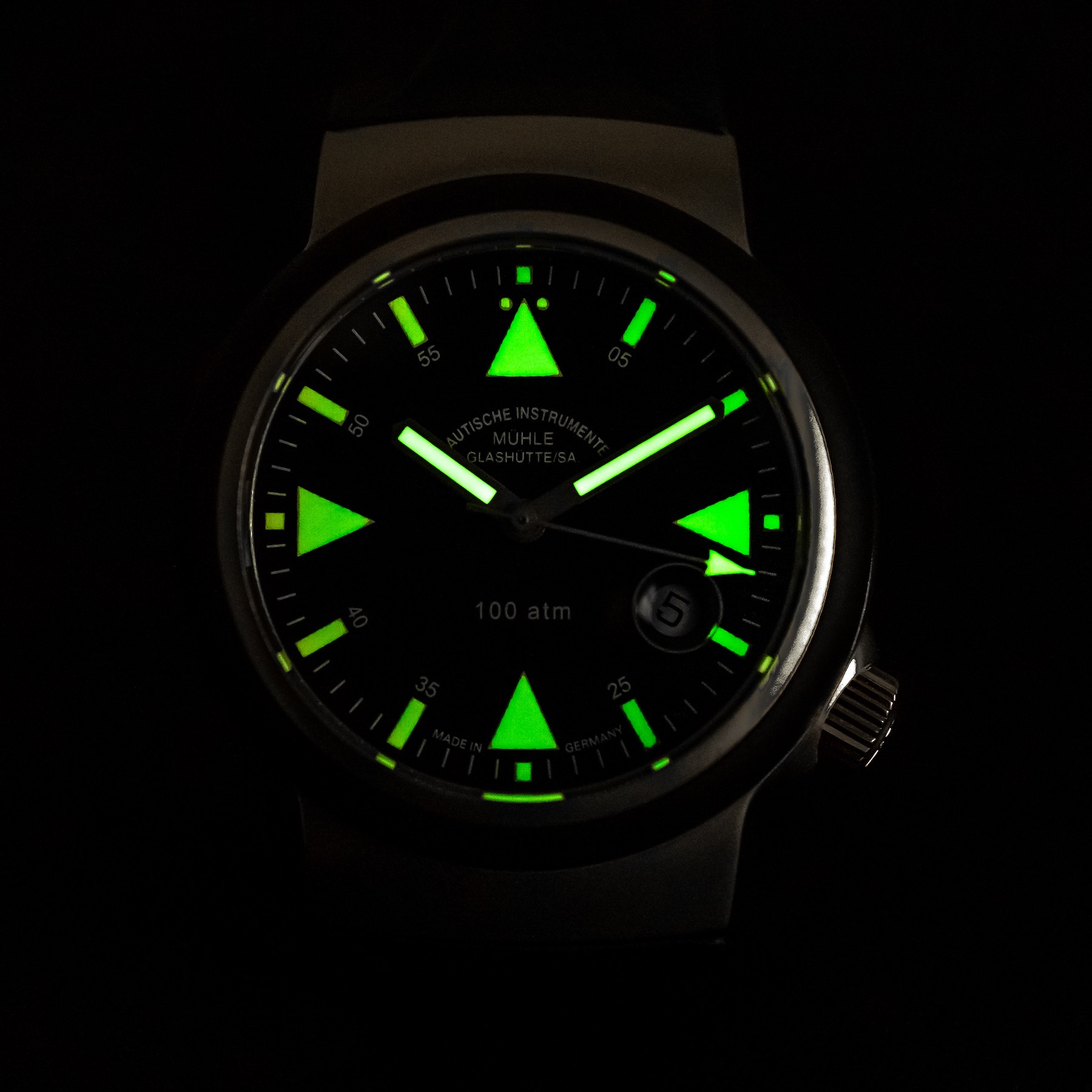 The dial of the S.A.R. Rescue-Timer places a premium on legibility in all conditions with oversized and highly luminous markers throughout. The triangular markers at 12, 3, 6, and 9 o’clock allow for instant orientation, and the Super-LumiNova ensures high readability onshore or while battling through the churning seas toward a capsized vessel. The S.A.R. Rescue-Timer includes a circular date window at 4 o’clock accompanied by an internally ground cyclops magnifier, an addition that adds the functionality of a magnified date without disrupting the smooth lines of the crystal. 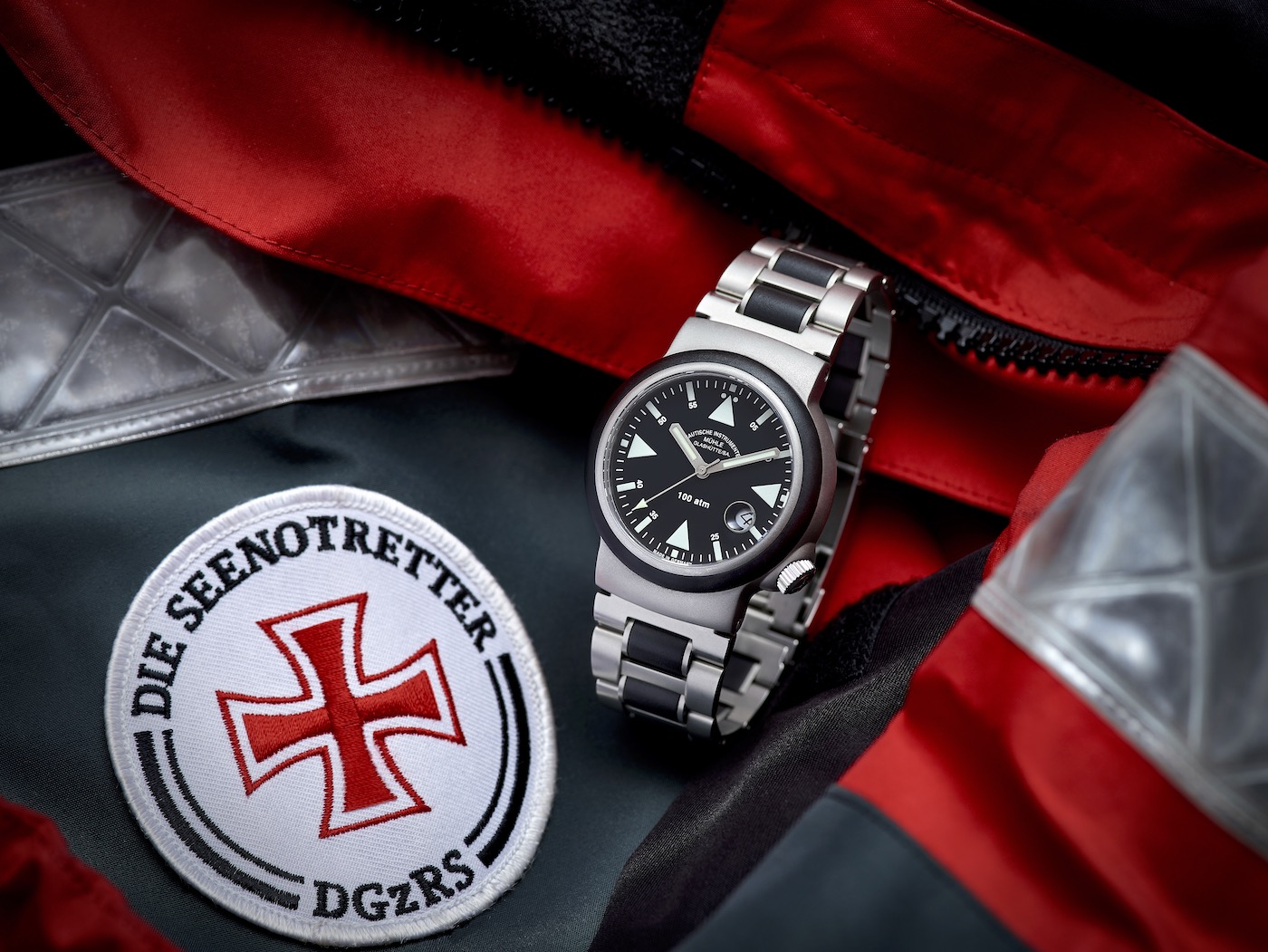 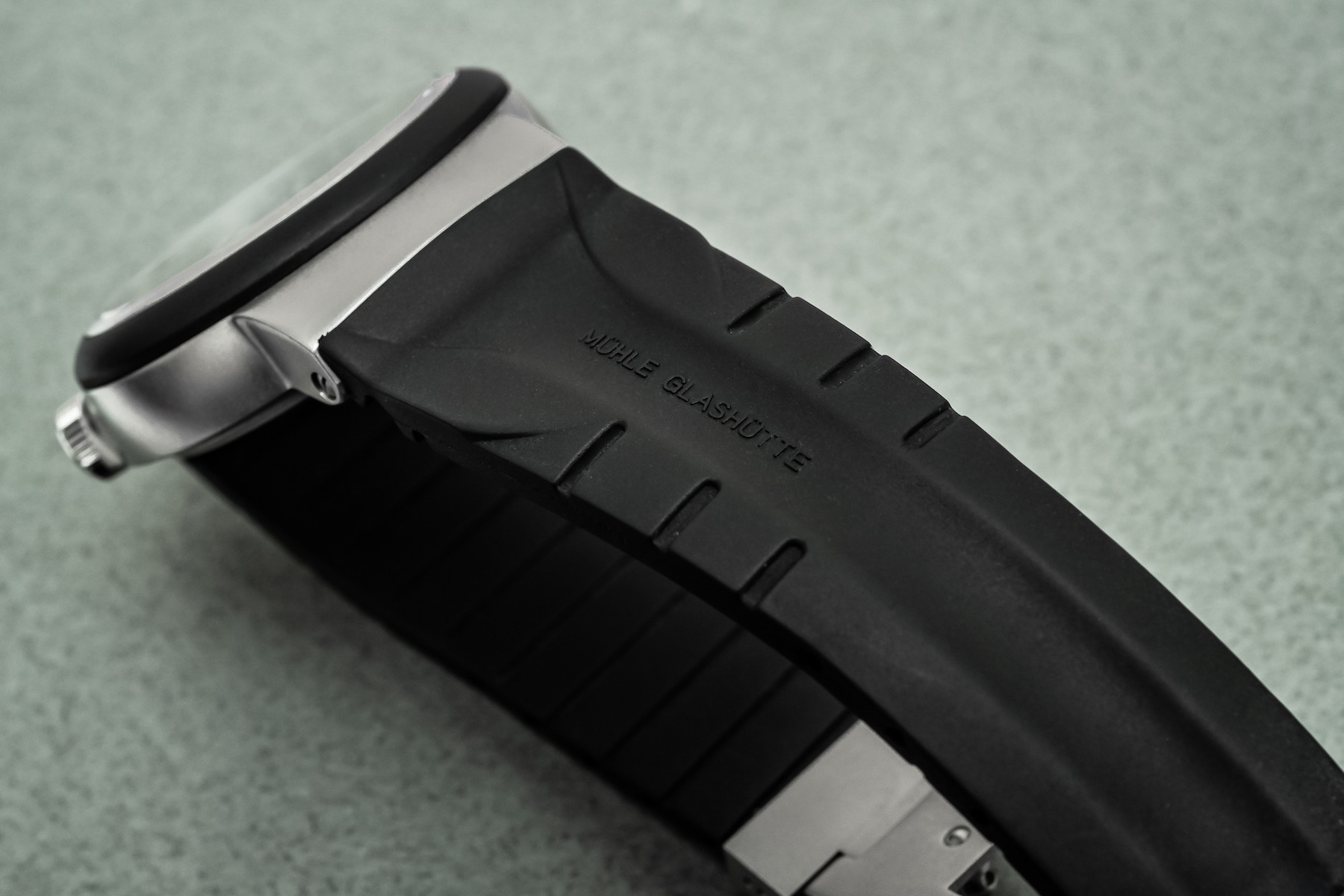 Completing the package, the S.A.R. Rescue-Timer comes mounted on either a rubber strap with stainless steel safety clasp or a stainless steel band, bead-blasted to match the finish of the case and featuring rubberized center links for a distinctive look that complements the rubber bezel on the case. For added strength, the strap or bracelet is held on by screwed bars in lieu of spring bars and, despite the unique case shape, the 20mm lug width will work with any aftermarket straps. 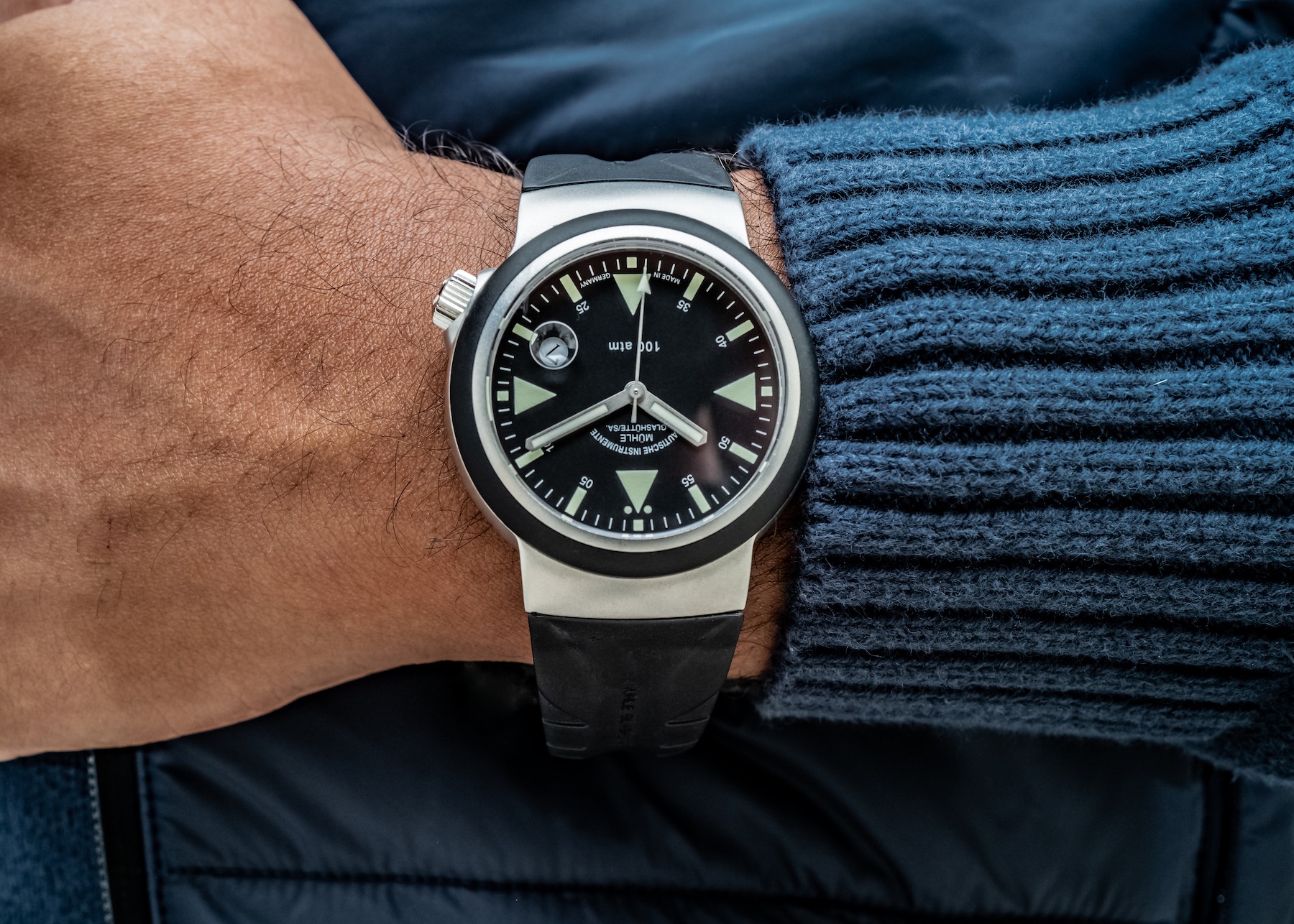 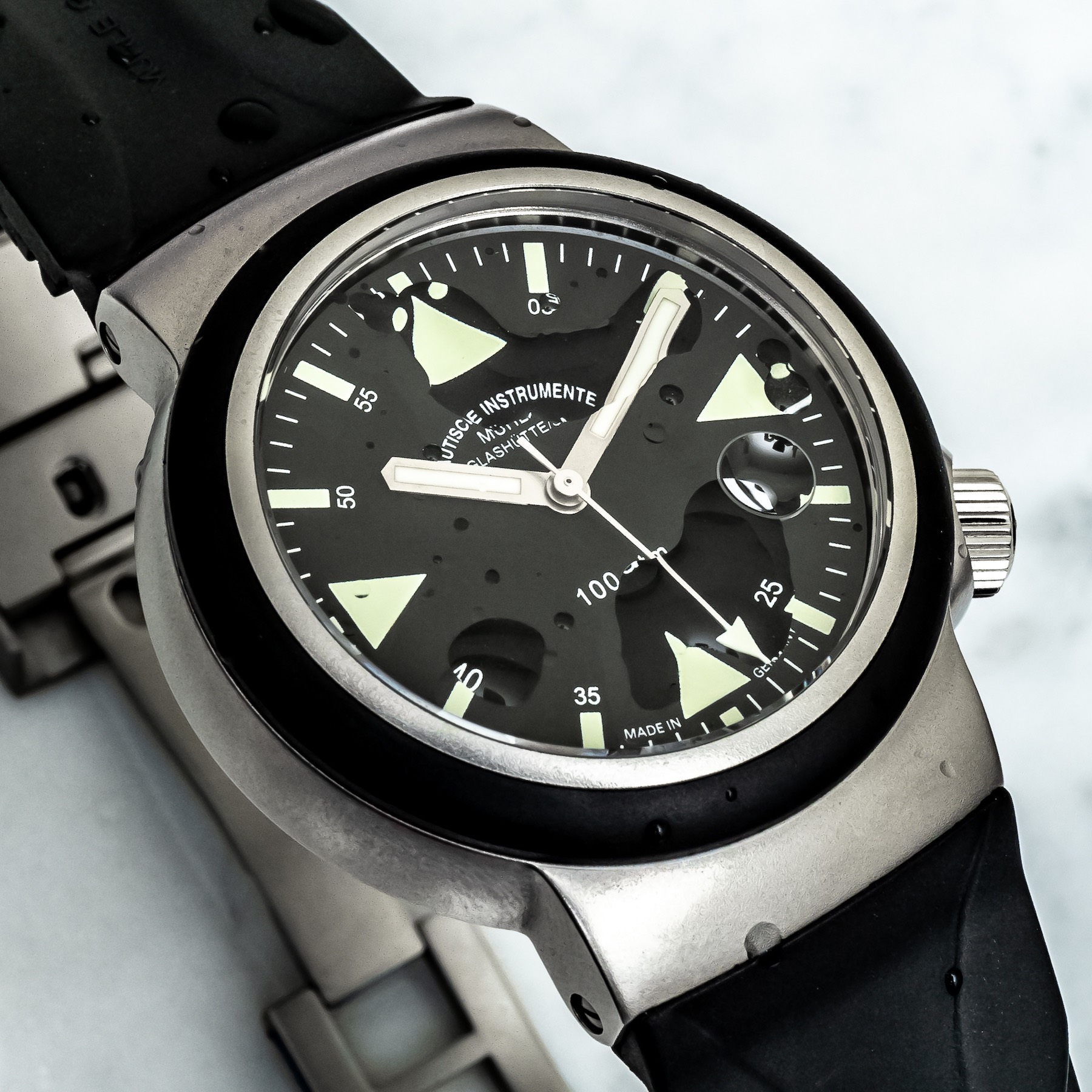 The extreme attention to detail and functionality apparent in the S.A.R. Rescue-Timer epitomizes Mühle Glashütte’s core values as a brand. Originally established in 1869, Mühle Glashütte operated as a family-run business, producing measuring devices, maritime instruments, and timekeeping systems for a variety of Germany industries. After WWII, the company was dismantled, factories destroyed, and equipment expropriated. Despite all the setbacks, Mühle Glashütte was resurrected in 1994 as the only watch company in Glashütte still owned and operated by its founding family. Since 2007, Thilo Mühle – the fifth generation carrying on the Mühle tradition – has been at the helm of what is now a 63-employee company with roughly 260 dealers across the world. Despite the brand’s resurgence and growth, Thilo Mühle holds fast to the tradition of producing precision timepieces purpose-made for nautical pursuits and beyond.

Mühle Glashütte has always had a strong connection to the sea, but how did the partnership with DGzRS begin?

Mühle: We’ve been working with DGzRS since 2001. The DGzRS are financed only from donations, and most members are volunteers. We asked them if they were interested in this kind of project, and they agreed. Now it is more than a relationship; it is friendship. I’m on the decision-making committee and so also a part of the DGzRS. It is definitely a fascinating cooperation.

The S.A.R. Rescue-Timer has many design elements that are a direct result of the needs of the rescue crews (e.g., the smooth lines and rubber bezel). Can you describe how specific feedback from the rescue crews was incorporated into the design and construction of the watch?

Mühle: These guys are responsible for the master design. The information from the DGzRS formed the praxis. They told us that when they go out into heavy seas, they destroyed their private watches. We use sapphire glass with a thickness of 4mm, so you can’t really destroy it while wearing it. As another example, the dial has four triangles. Three of them (3,6 and 9 o’clock) have the apex of the triangle toward the center of the watch. At 12 o’clock, the apex faces up. The readability is so easy and fast both during the daytime and at night. All the triangles are luminated with Super-LumiNova. The case has no sharp edges, which is very important if you rescue people. 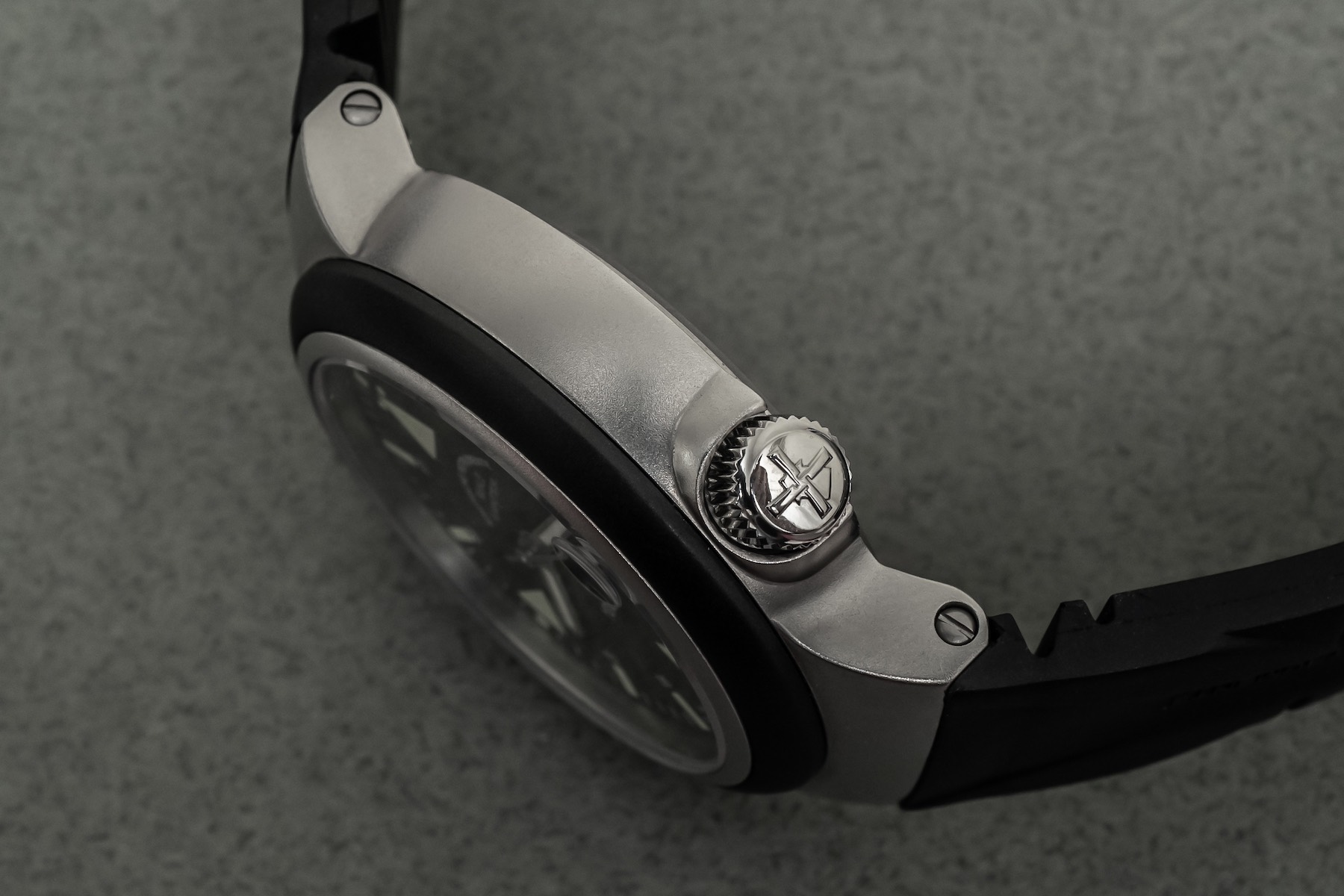 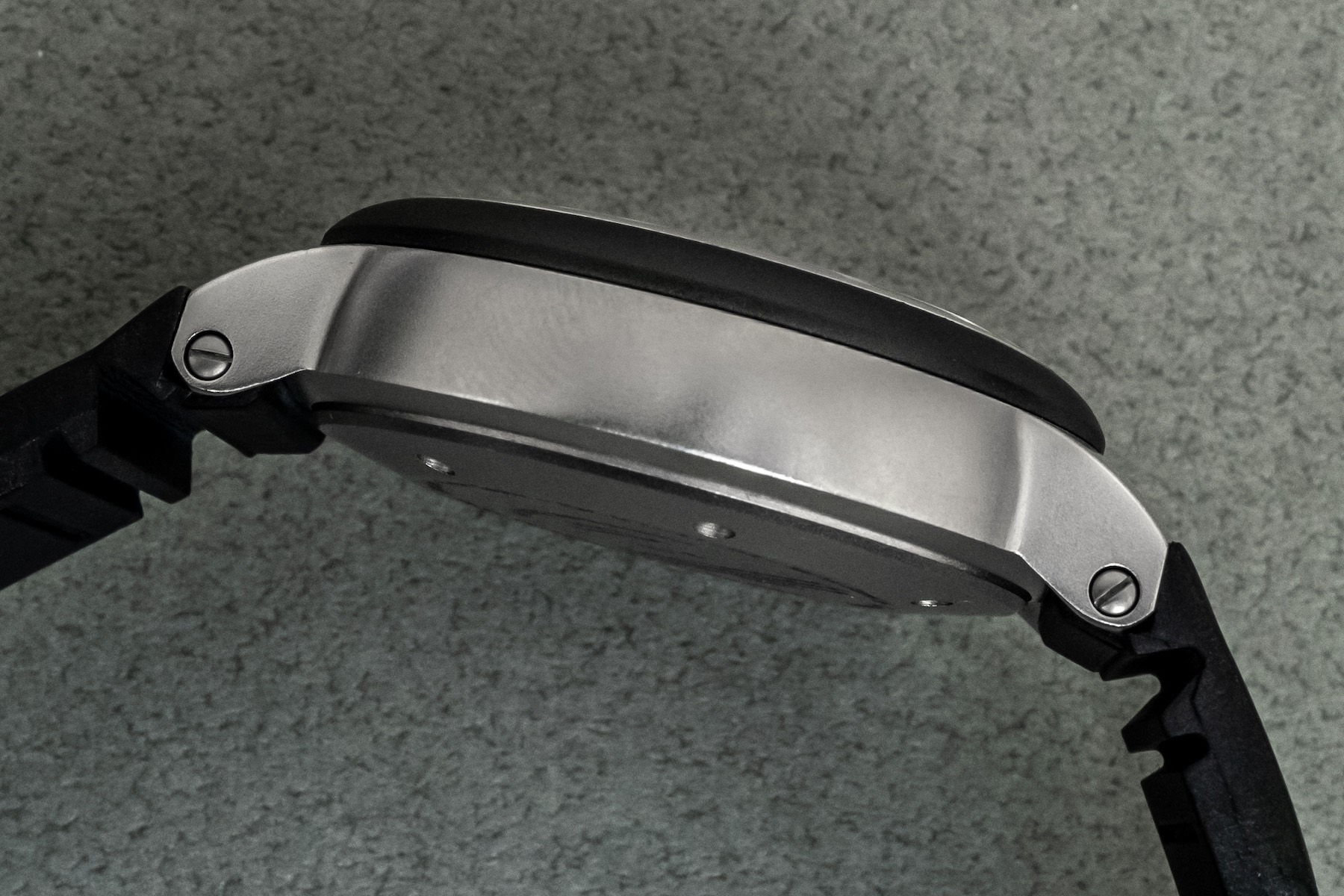 Can you share any anecdotes about a time when the S.A.R. Rescue-Timer was put to the test?

Mühle: At the beginning of the tests, we did some tours with a rescue ship, and the sea was very rough. People in the Nordic part of Germany are very direct, so we had to learn how to communicate effectively.

Is there anything else you can share about the inspiration behind Mühle Glashütte’s watches?

Mühle: Generally, we develop models with people who want to wear or use the watches daily and in every situation. For this project, we developed our patented woodpecker regulation. The advantage for people who wear the watch is the added shock protection. We love to produce watches, and our models have a soul.

The Mühle Glashütte S.A.R. Rescue-Timer retails for $2,499 on bracelet or $2,399 on rubber strap; more information on the watch can be found on the brand’s website.