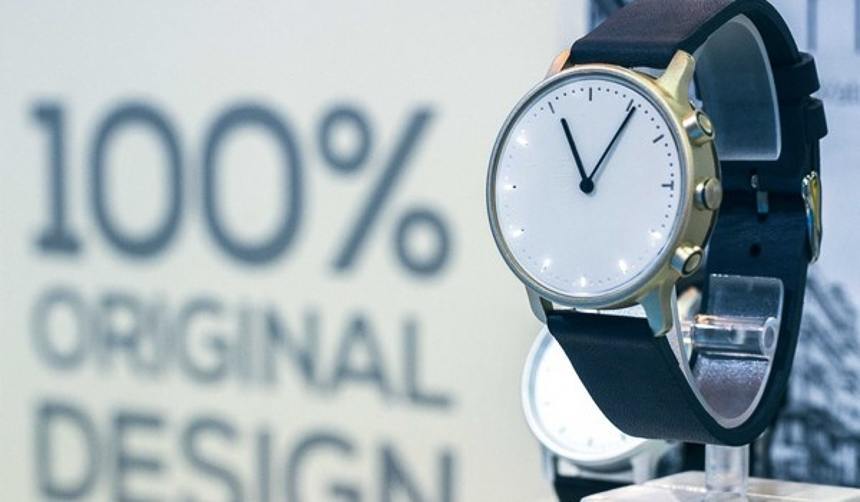 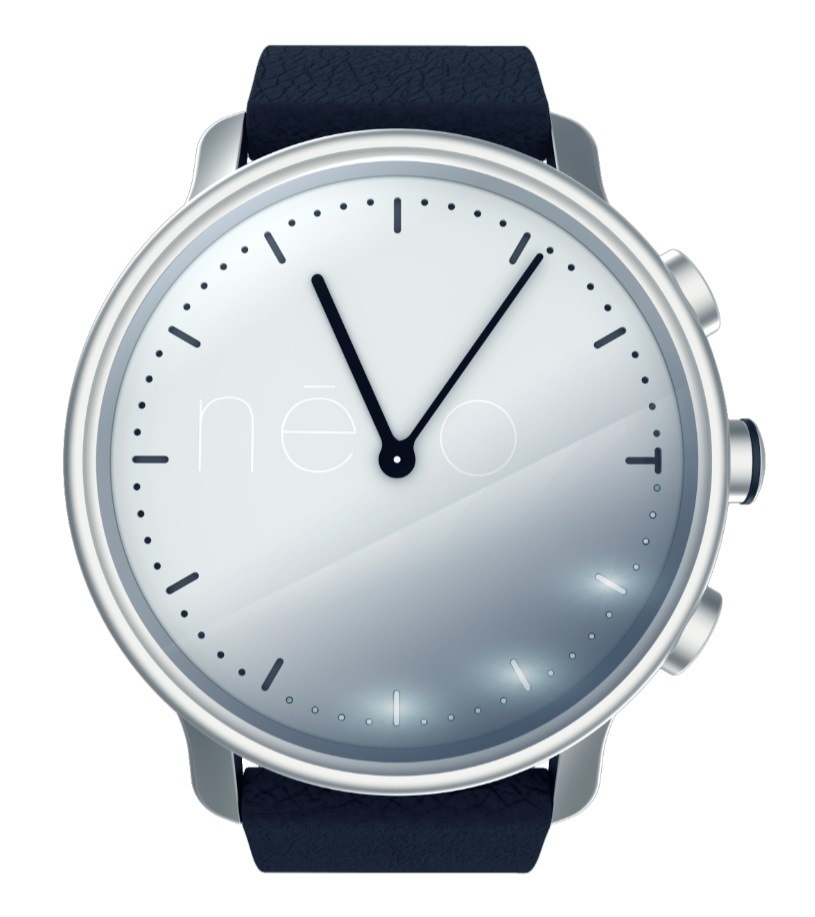 Say hello to the Nevo smartwatch, a minimalist smart device that the creators claim is the world’s first minimalist watch with a Swiss movement that includes both activity tracking and fitness features, as well as phone notifications. Perhaps the closest design competitor would be the Withings Activité smartwatch that is also minimalist in design with an analog dial. What also makes these two watches similar is that neither is yet available for purchase, so we can add them to the quickly growing roster of “might be around someday,” yet otherwise exciting connected wearable devices. The Withings was announced in around June of 2014 and, as of recently, didn’t have a specific time frame for production, as far as I know. According to Nevo, however, their watch is currently in final testing and will “ship worldwide in early 2015.”

As we continue to cover smartwatches in addition to traditional watches, we will maintain a few rules. The first of which is an attempt to discuss only the coolest stuff as well as stuff that is actually available. The vaporware of 2014 (and, hopefully, not also 2015) is the smartwatch because we’ve seen dozens of exciting concepts but very little exciting (or at all, for that matter), in terms of actual executions. With the Apple Watch being due for release in the first half of 2015, the pressure will likely be on all the “little guys” to actually deliver on their promises. 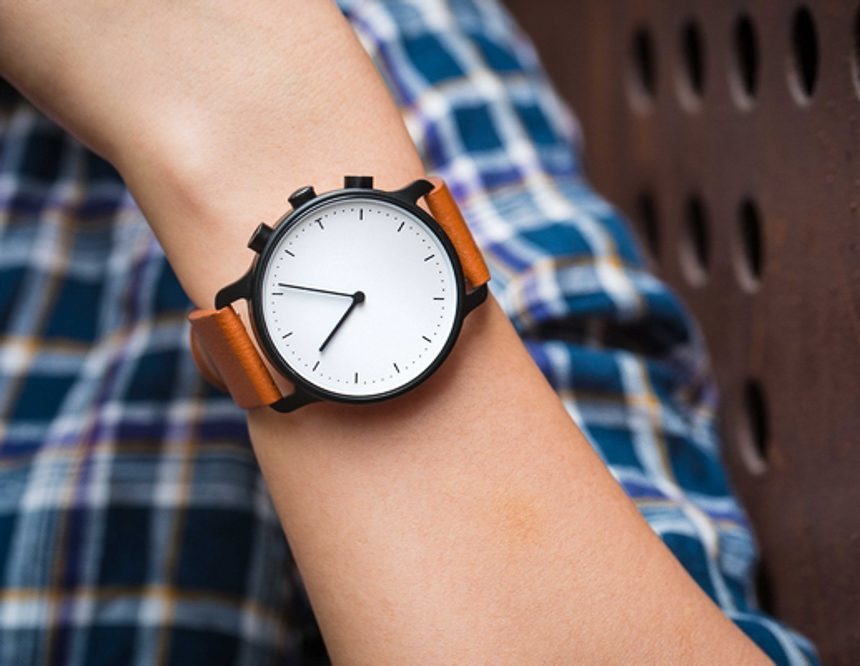 What is really to blame for the almost total lack of accountability when it comes to when smartwatches (or other new technology, for that matter) come to market is the popularity of the crowd-funding-style business plan. Entrepreneurs of all types flock to mostly Kickstarter and Indiegogo to ask people to “back” their yet-to-be-released products in exchange for special pricing and offers. It presents consumers an ability to vote with their wallets on items and ideas that might not ever come to fruition otherwise, and it presents a much lower-risk financial environment for project starters.

The downside to crowd-funded products is that the items have no guarantees that they will be released on schedule, or sometimes, at all. Delays of months or sometimes years are not unheard of. So, all that is a long way of saying that backing cool projects on Kickstarter is a great idea, but in many editorial aspects, we at aBlogtoWatch will often showcase a good idea if it merits it, but we can’t recommend anyone buy something if it is novel until we have seen it in the flesh. In the context of Nevo, I don’t actually think they are going to use the modern crowd-funded model, though they are accepting pre-orders for the Nevo smartwatch now, in advance of the 2015 release. 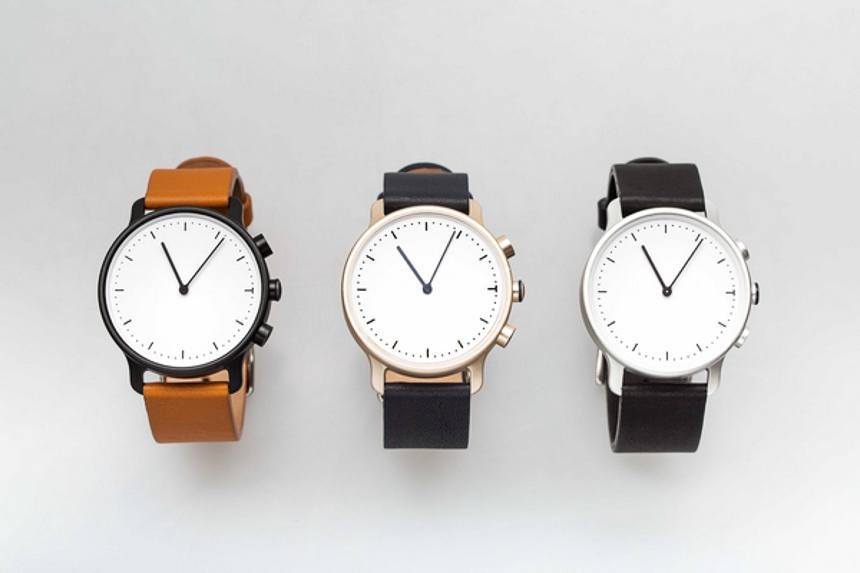 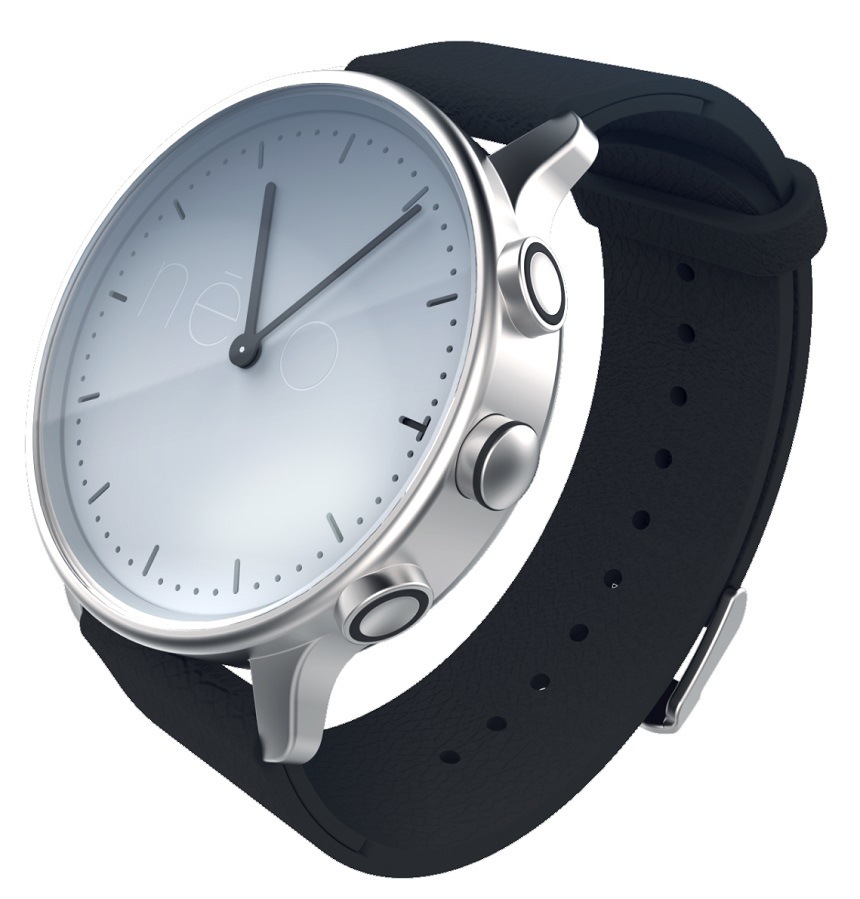 So, enough with my rant about vaporware watches and crowd-funding – what about this very attractive two-handed analog minimalist smartwatch that could easily look like just another modern dress watch? Well, the first giveaway that something unique is going on is the two pushers in addition to the crown. Watches with only the time have zero need for anything other than the crown. In some regards, the Nevo smartwatch is a sort of hybrid watch. It contains a traditional Swiss quartz movement that powers the time, as well as a totally different mechanism (with separate battery) that powers the notification functions and activity tracking. Assuming Nevo is able to fulfill their promises, the product sounds very exciting and a potentially very good use of the current state of technology.

We are extremely skeptical about new companies (or even big ones) that offer products with a long list of features but without the hardware or battery capacity to logically support those features. That is what I sometimes call “going Samsung” (though I am sure Samsung will eventually catch up to having its smartwatches satisfactorily do all the things they say that they will do). Nevo takes a more conservative and perhaps wiser route by attempting to leverage what works into a solution that it feels will be appropriate for many consumers. The ambition is all in the elegant design and trying to turn existing watch wearers into smartwatch wearers. 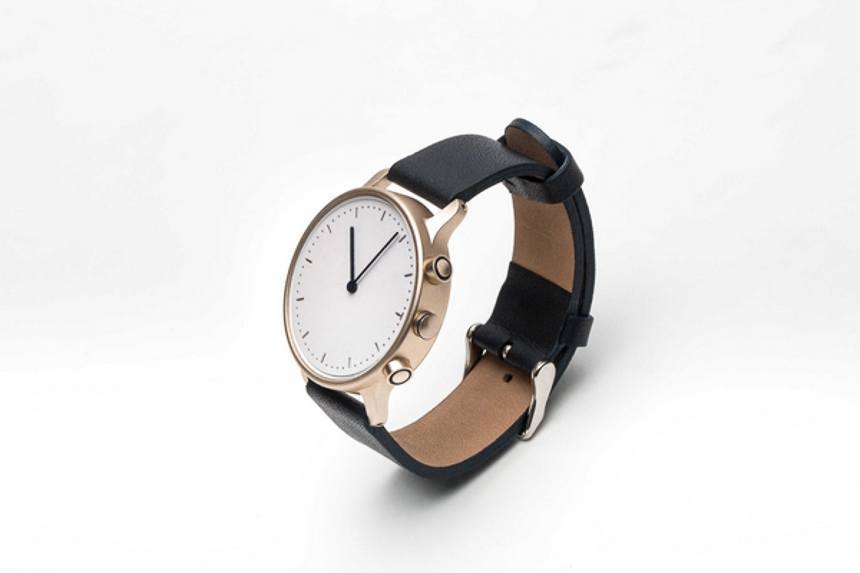 I mentioned that the Nevo smartwatch contains two movements. The basic one that indicates the time isn’t worth discussing more than the fact that its battery is stated to last for five years – which isn’t unheard of. Rather than be rechargeable, the other battery for the tracking and connectivity functions is said to last for six months and is a standard CR 2025 cell that can be easily purchased at most supermarkets and drug stores. So no recharging, and at least a few months of life – sounds promising. Furthermore, if the battery on the tracking and notification system dies, the watch will still tell the time without issue since it is fully independent.

While the Nevo smartwatch only has two hands, it uses the hour markers in a novel way to indicate information as they light up. As the hour and minute markers light up in a clockwise direction, they indicate your daily activity progression, encouraging the wearer to keep moving in order for them to all light up. These same lights are presumably used for the notification functions that connect to a host phone via Bluetooth. Via the Nevo phone app and on-board sensors, the watch tracks daily steps taken, distance traveled, calories burned, and more. The Nevo smartwatch is also said to have a vibration function for notifications. 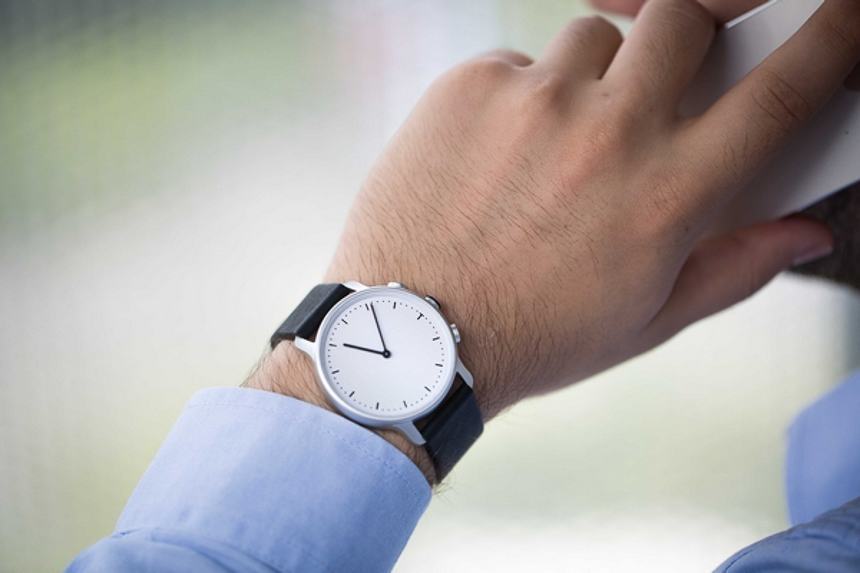 Furthermore, Nevo makes a lot of bold claims about its app, which is said to be the hub of its utility. A lot of smartwatch apps are very skeletal, actually, so it is interesting to see that a big part of the Nevo smartwatch isn’t just being connected to your phone, but to deliver useful data to the Nevo app that helps track your daily activity. Nevo also claims a series of social functionality into the app which sounds interesting. Perhaps most important is the fact that the Nevo app will be compatible with and integrate with other major fitness and activity tracking apps on both Android and Apple iOS devices. Nevo promises that its app and the data from the watch will be compatible with Google Fit as well as Apple HealthKit. If this actually works as promised, it could lead to a lot of user adoption because the Nevo smartwatch could be used with some very popular applications versus merely its native one. 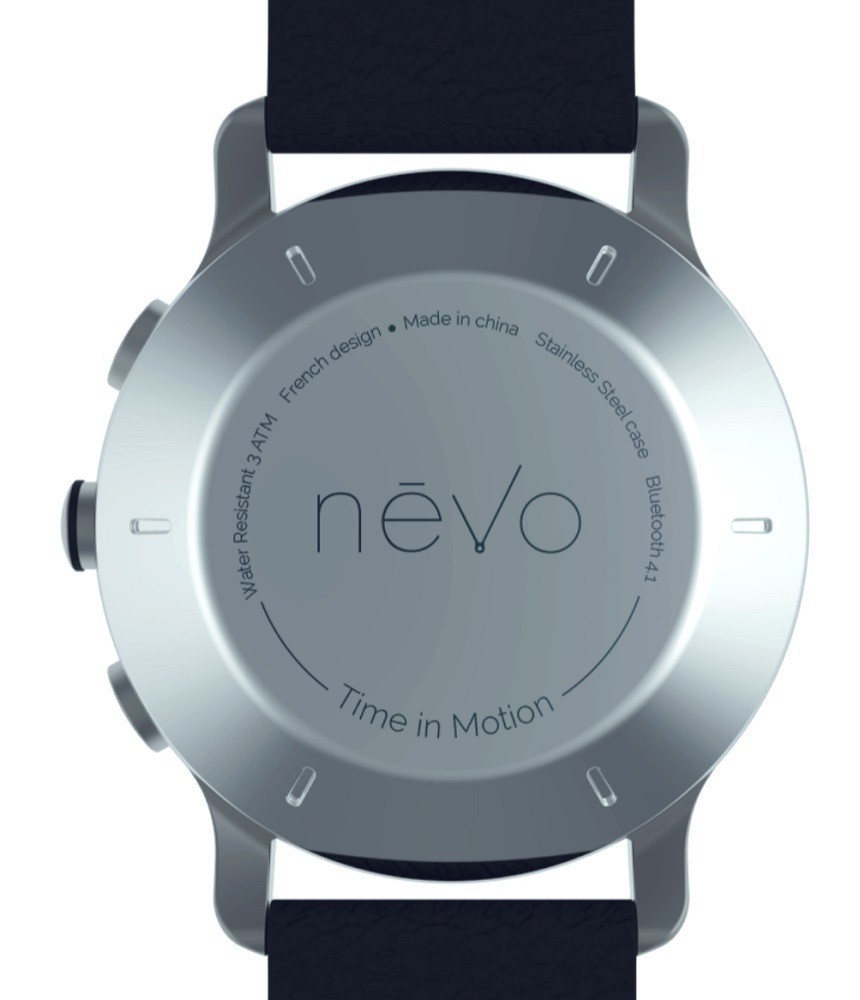 As a company, Nevo hails from Hong Kong as well as France, and they make a lot of reference to the fact that the watch design is French. While they haven’t indicated the size of the Nevo smartwatch just yet, it fully appears that the steel case is about 42mm wide and comes in a few finishes including steel, PVD-coated gold tone, and PVD-coated black. The black hands on white dial offer a highly legible look and the overall look of the timepiece is attractive. Nevo even includes a sapphire crystal over the dial (which is surprising at the watch’s price). The case is said to be water resistant to 30 meters (which in the watch world isn’t that much, yet Nevo does seem to suggest you can swim with it). It will also come with an Italian leather strap as well as an extra fabric strap. The style of the case and lugs means that the user can easily swap out the straps for whatever third-party straps they want.

Nevo mentions that they feel many consumers want the benefits of an activity tracking and notification device without appearing as though they are wearing a gadget. We agree. There are those people who love the idea of a smartwatch but are loathe to actually be seen with most of them. The Nevo smartwatch does appear to be a good compromise for that consumer demographic but smartwatches still have a way to go before traditional watch lovers will abandon their beloved mechanical watches. Price for the Nevo smartwatch is a reasonable $199 and it can be pre-ordered now via their website. nevowatch.com