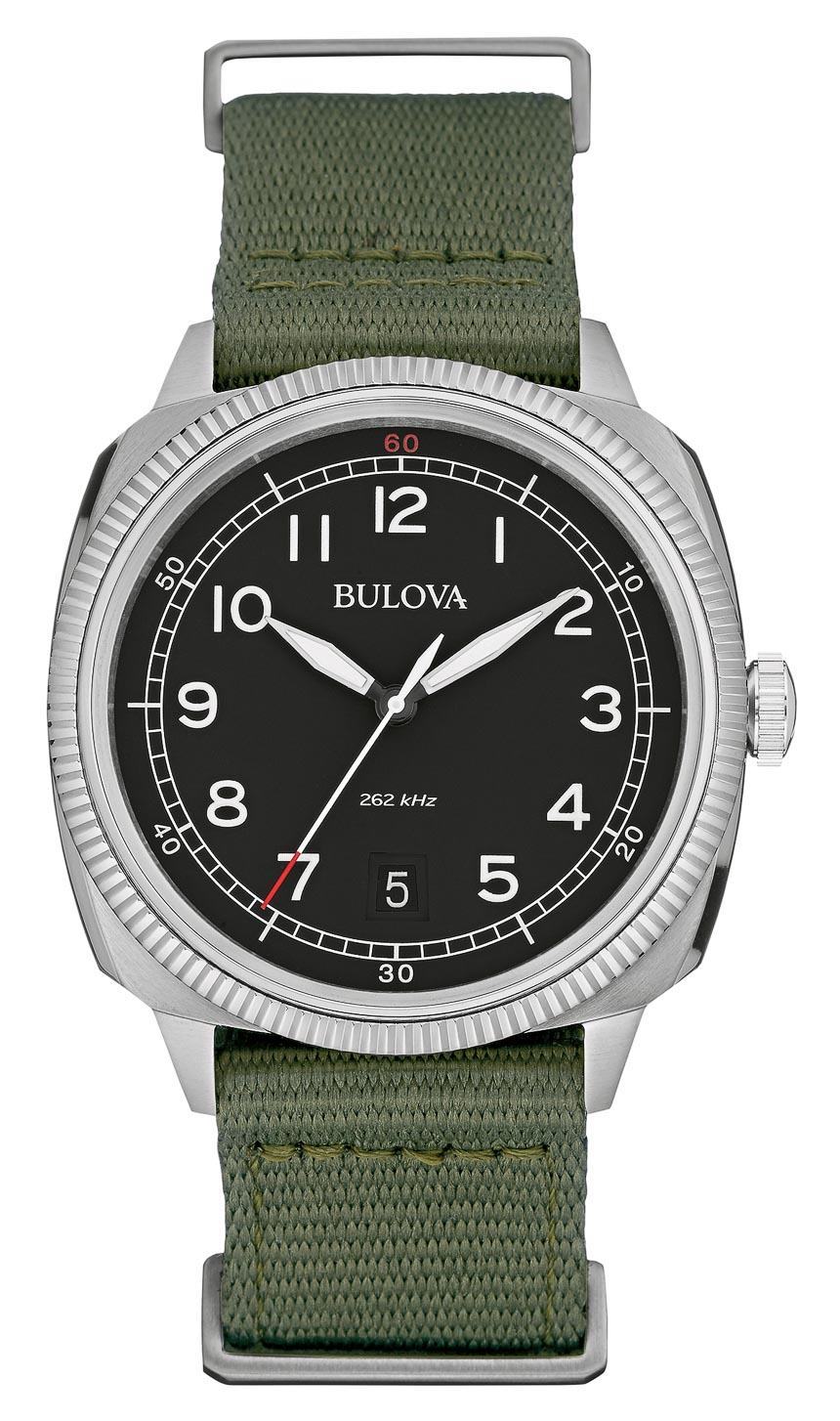 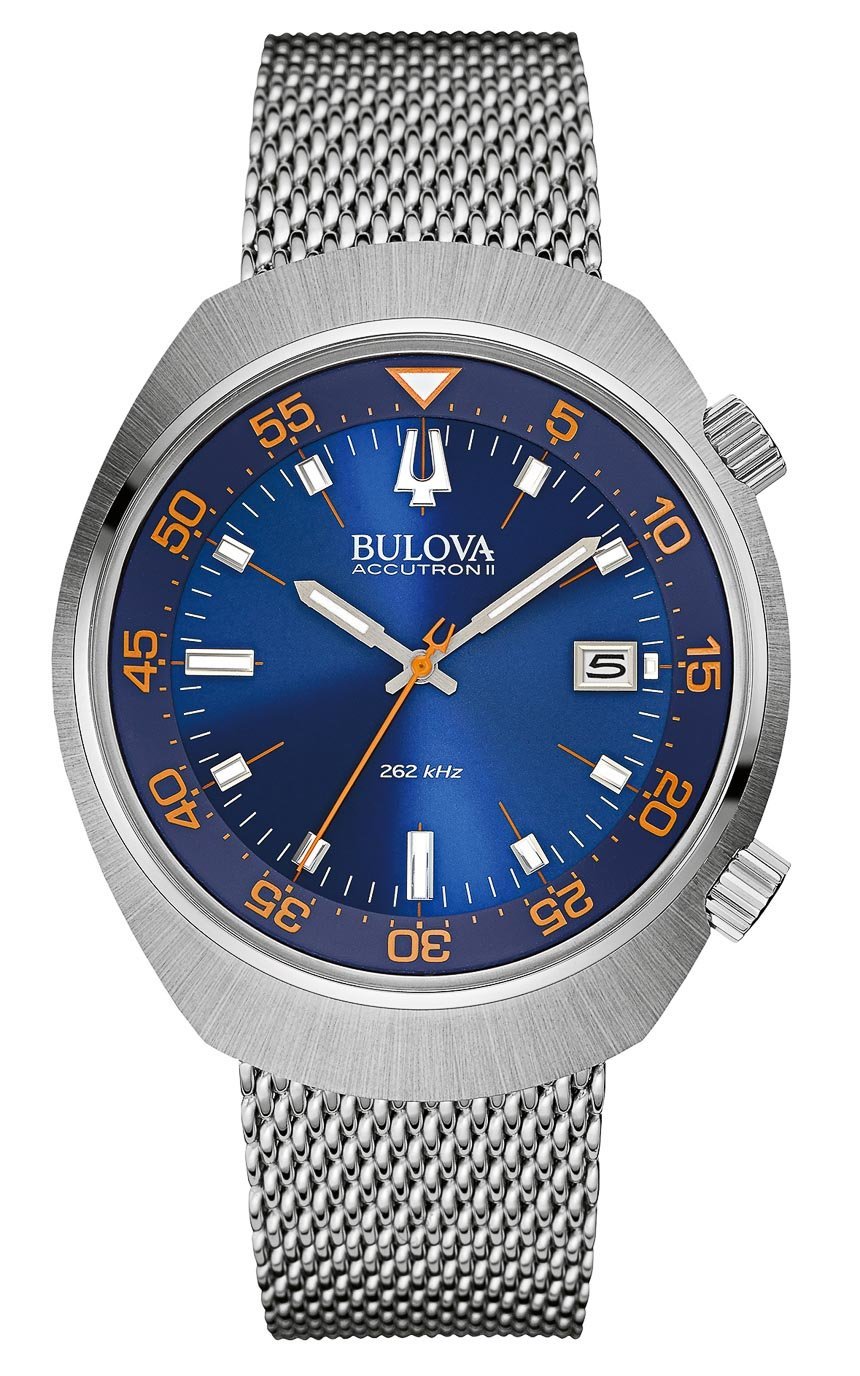 Simple, satisfying, good value proposition, and timeless… these are some of the things Bulova is doing a good job at becoming known for over the last few years, especially when it comes to their quickly developing Accutron II collection with their UHF movements. “UHF” stands for Ultra High Frequency and refers to their extra-high frequency quartz movements. These are to be differentiated a bit from Bulova Precisionist movements – which are similar but larger in size. Battery life for each is about two years.

Bulova will release a lot of new Bulova Accutron II UHF-powered watches in 2015, and these three sport models are good indicators of what to expect. You can see that a new design element (which is actually a little bit of a retro throwback) is to place the quartz frequency value on the dial itself. This is a lot like mechanical watches that say “Automatic” on the dial. On each of these new Bulova Accutron II watches, Bulova prints “262 KHz” which is the frequency of these UHF quartz movements. How does that compare exactly? Well your standard mechanical watch operates at between about 3-5Hz – which is good for accuracy of just a few seconds a day. Your standard electronic quartz movement operates at 32,728 Hz (32.728 KHz) which offers accuracy of a few seconds per month. The Bulova UHF quartz movements operate at 262 KHz, which offers accuracy of a few seconds per year. 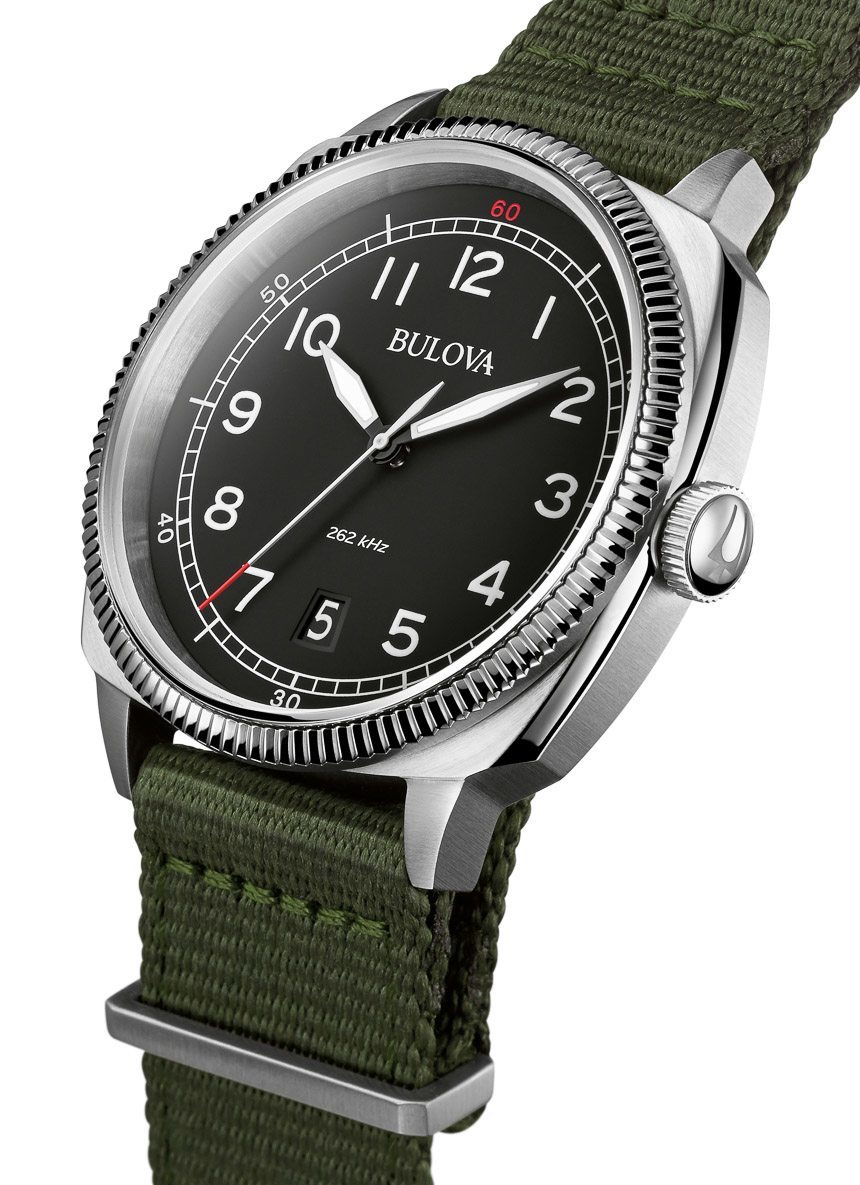 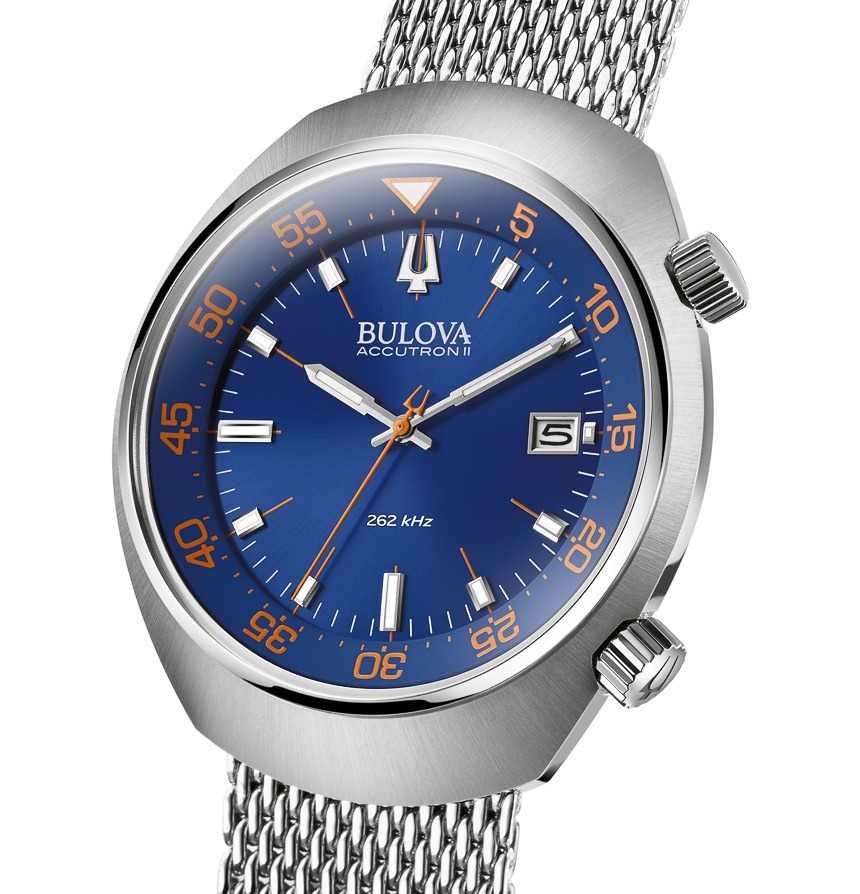 The UHF movements also offer sweeping seconds hands similar to those in mechanical watches and they have a battery life of about two years. All that is nice and good, but what I appreciate the most is that they offer all this for a reasonable price of no more than about $200 – $300 to start. Bulova Accutron II watches top out a few hundred dollars more depending on the model.

Speaking of entry-level, the lowest price watch in this group is also one of the most attractive, with its simple vintage military styling inspired by 1940s Bulova watches. I am talking about the Bulova Accutron II Military 96B229. The 42m wide (10.8mm thick) steel case looks to be thematically like an original Rolex Oyster watch from 1926 – only bigger with its cushion shape and coined-edge bezel. Water resistant to 100 meters, the Military is matched to a green fabric strap and is easily the most mainstream and fashionable of the bunch. The black and white dial has just a hint of red and looks to be really legible (even though it appears that the minute and hour hands are a bit too similar in size). I like that the date window has been integrated into 6 o’clock with a matching color disc! 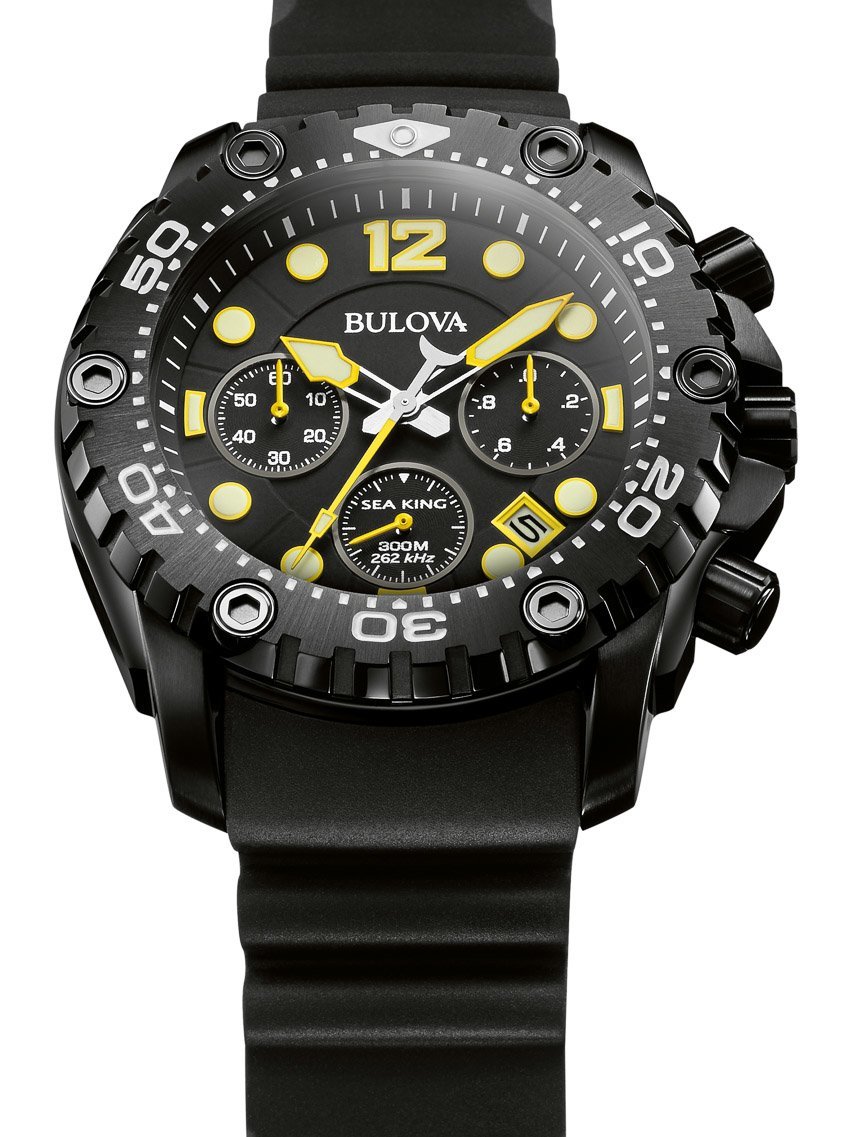 From there, you have the vintage diver-style Bulova Accutron II Lobster 96B232. This builds on the Bulova Snorkel watch from 2015 with an Omega-style case and internal rotating bezel. The 43.5 wide steel case connects to a Milanese mesh metal strap that really offers that retro dive watch feel. This color variation has a metallic blue dial with orange accents and is pleasantly legible. Having said that, like the snorkel before it, while you can go swimming with the Bulova Lobster, it is not a serious diving watch, with 100 meters of water resistance.

Bulova’s serious diving watches for 2015 will be the reintroduction of the Bulova Sea King collection. You can see a fun vintage ad for a Bulova Sea King here. At least one of the Sea King models will exist in the Bulova Accutron II collection with a UHF chronograph movement. The Bulova Accutron II Sea King 98B243, here, has a 48.5mm wide IP black-color steel case with a rotating diver’s bezel and rather masculine design. The case is 15.3mm thick and water resistant to 300 meters. There will also be a similar Bulova Sea King model with some different features, 1000 meters of water resistance, and an automatic mechanical movement that we will cover elsewhere. 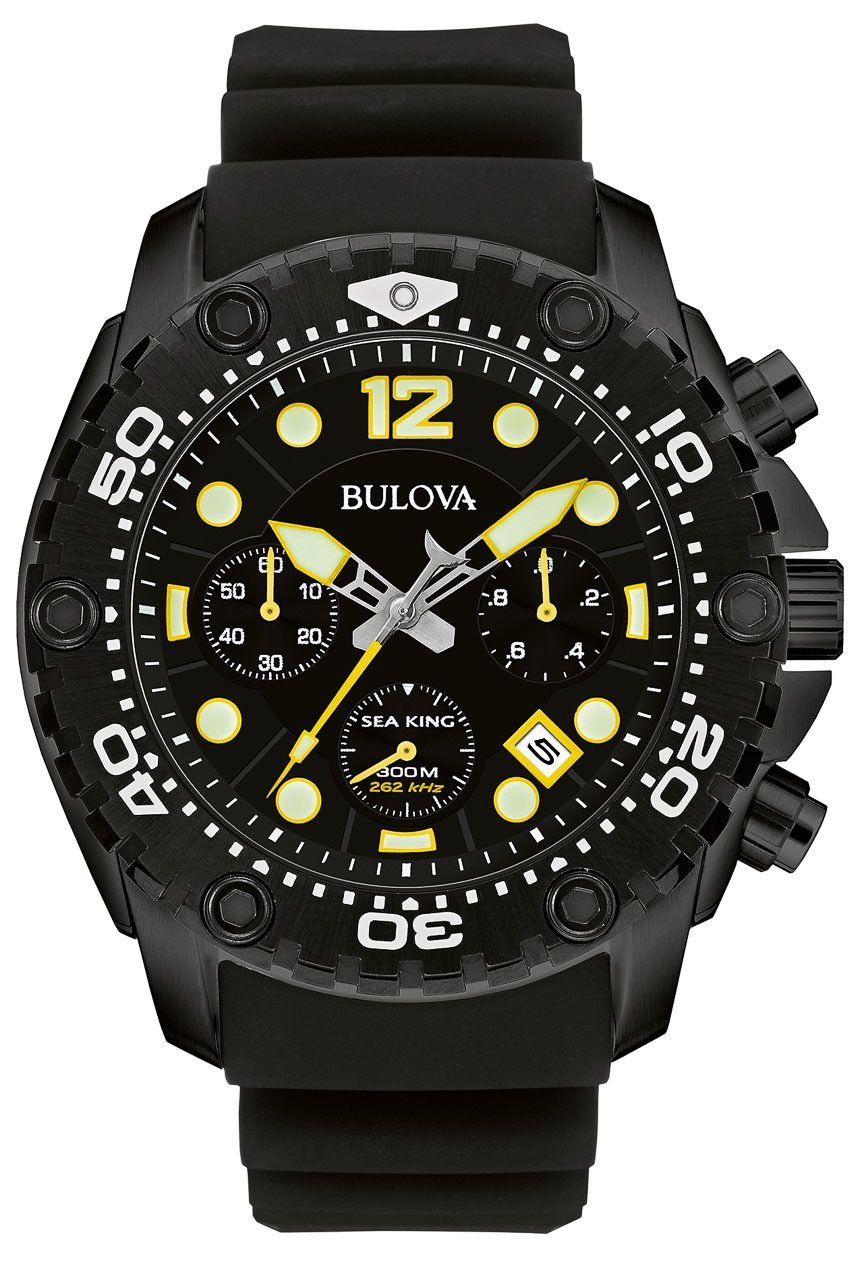 For the Bulova Sea King Chronograph, Bulova seems to use a new UHF movement that I haven’t seen before which measures 60 minutes with a 1/10 of a second indicator (even though the movement theoretically can be a lot more precise in what it can measure). If you want more chronograph precision, then I suggest you look at a Bulova Precisionist Chronograph that tracks down to 1/1000 of a second.