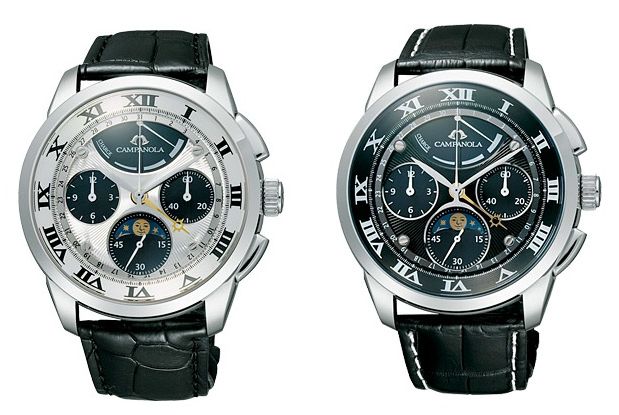 I call any watch a “new flavor” when the look and feel change a bit, but overall the watch is the same, being part of a series. This is a watch maker’s way of sprucing up a line a bit, or adding a few more color schemes. Don’t let this practice fool you into thinking it is a lazy attempt at a new watch. Watch companies would be unwise not to allow a watch to fully realize its potential. A slight change of design can drastically change a watch’s character, and move it into your favored versus dismissed pile.

For 2008, Citizen is releasing a handful of interesting offerings at Basel World. None the least of which are two Eco-Drive based Citizen Campanola watches. The Eco-Drive based Campanola watches represent a small segment of the entire Campanola line, and of course different movements. The challenge has been in allowing for the watch dial surface to be penetrated by light, yet still maintain an attractive look, befitting the Campanola moniker. Eco-Drive movements are light powered (almost all light, not just sun-light) and must have special dials as the photoreceptors lay beneath this surface. Most Campanola watches have beautifully ornate dials which are hand painted. The amount of pigment and lacquer on the dials makes it impossible to implement an Citizen Eco-Drive movement, but as you can see, this is not the case for all Citizen Campanola watches.

Look closely at the texture on the exposed areas of the dial and you will see a ridge pattern. This looks attractive, but also tricks the eyes into thinking the surface is a bit more opaque than it actually is. I am actually amazed at how little space on the dial needs to be reserved for this purpose though. I don’t think that the subdials share this light permeable quality. Kudos to the Citzen Eco-Drive movement for being so adaptable. Given the movement, the Citizen Campanola Eco-Drive watches feature an energy reserve so that you know when they need to be taken out of the case and worn a bit. Further complications are impressive, with a 12 hour chronograph, peripheral date indicator, and smiling moonphase indicator.

The two new Citizen Campanola Eco-Drive watches for Basel 2008 represent a departure from the recent Campanola trend of wildly avant garde. Compare these two with the similar watches from a few years ago discussed here. As you will notice, the new ones are decidedly more “mainstream,” offering slightly more conservative looks, while still being undoubtedly Campanola. The outer dial design with the roman numerals has been toned down a bit, from some of the wilder fonts Citizen used. The colors used are attractive silver tones with sharp contrasts with the blacks. Watch and dial hands are cleaner, more refined, and elegant. These watches do a better job of stating the time rather than screaming it. Not that screaming the time is bad, in fact I love the more wild Citizen Campanola watches out there, but they can be harder to appreciate for all audiences. These two are stately and sublime in communicating the Citizen Campanola message of quality and design without aristocratic pricing.