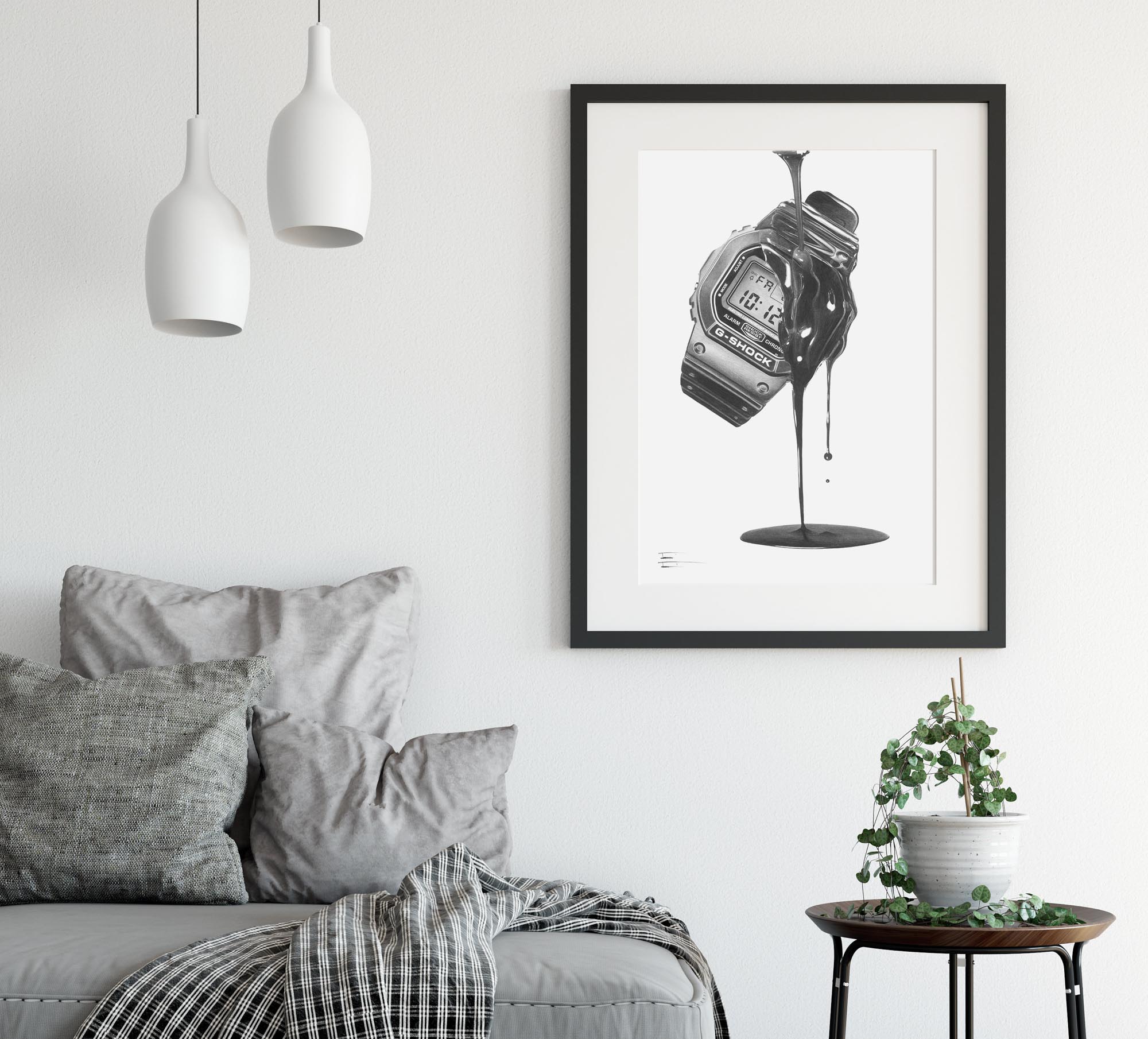 The aBlogtoWatch team is thrilled to announce an exclusive drawing we have developed with Tamás Fehér. We chose Tamás as the featured horological artist of the aBlogtoWatch Store based on your feedback in previous comments sections — many of you wished for a new artwork that featured a genuinely affordable timepiece. This is actually a first for Tamás, as well, after having created well over 100 artworks to date, all of which were consigned to showcase high-end and ultra-high-end pieces. And so we listened and delivered: The first in a series of affordable-watch artworks is, naturally, our watch drawing tribute to the magnificent G-Shock DW5600 series. 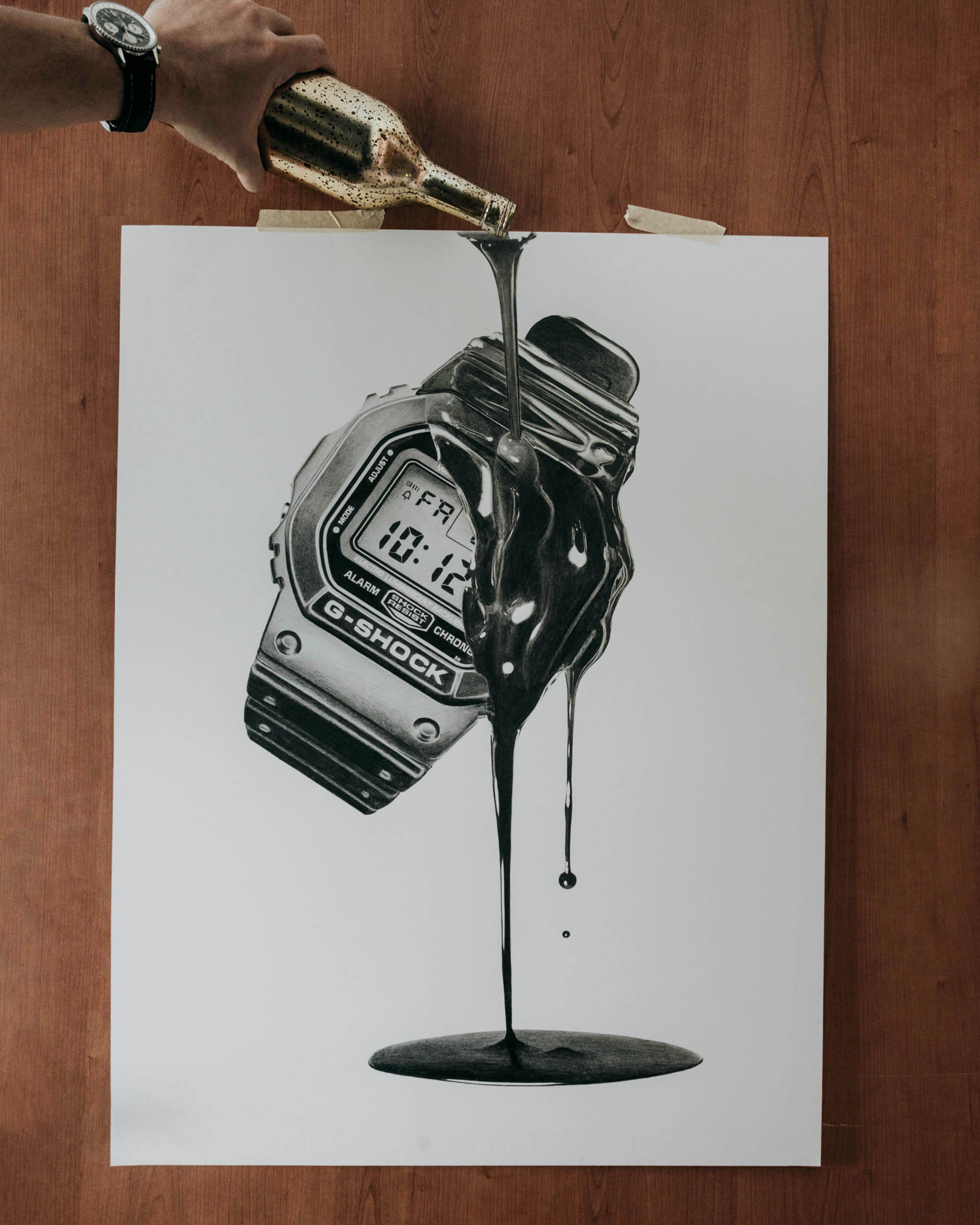 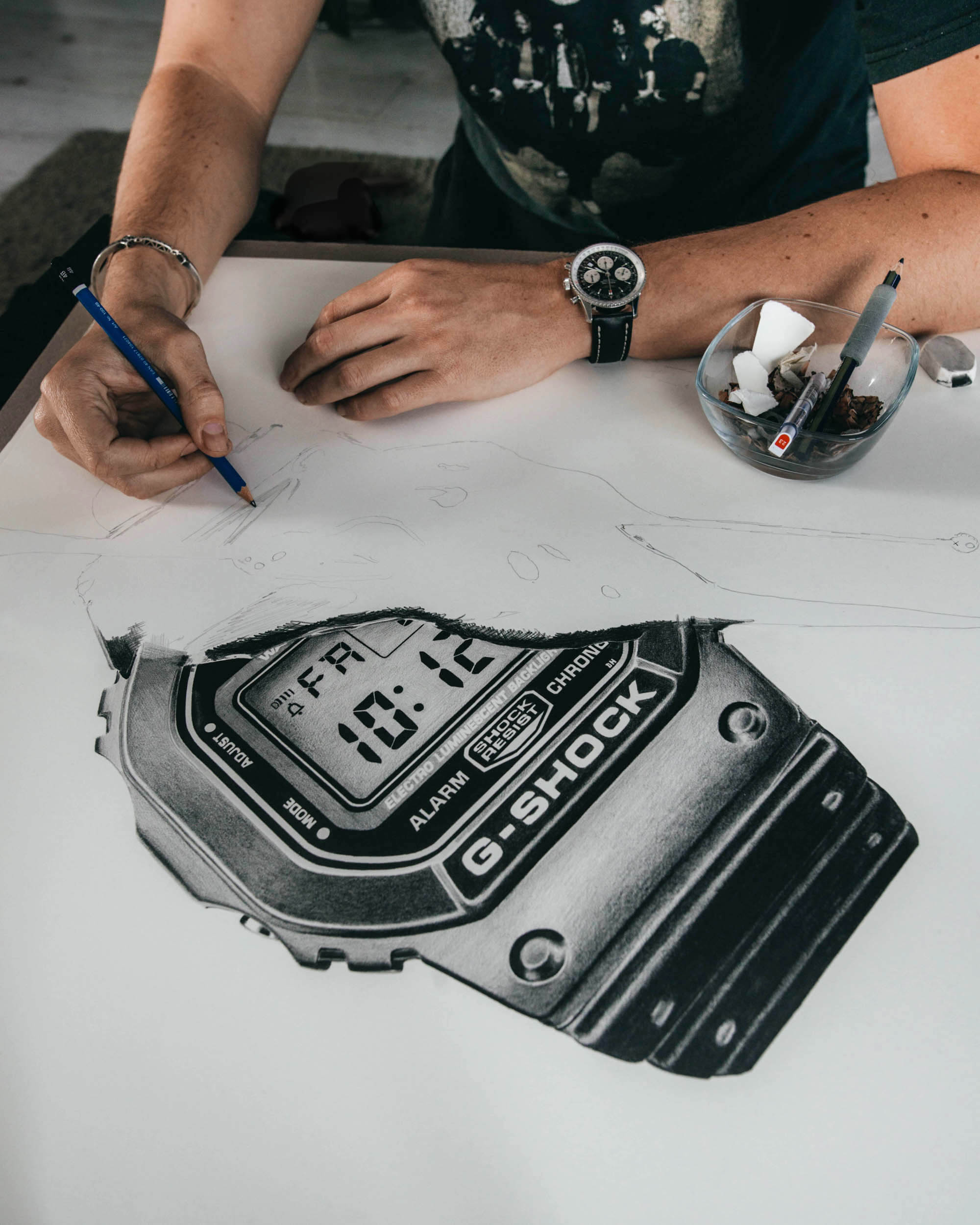 Beginning with the DW5600 was a given for all of us. Although over the years, our hearts and collections have been filled to the brim with highly affordable watches – digital and mechanical alike – the most common denominator among us is G-Shock. Tamás and the aBlogtoWatch team soon had the idea to connect an essential component of G-Shock’s success – its highly resistant resin exterior – with the artist’s newfound fascination with drawing liquids. 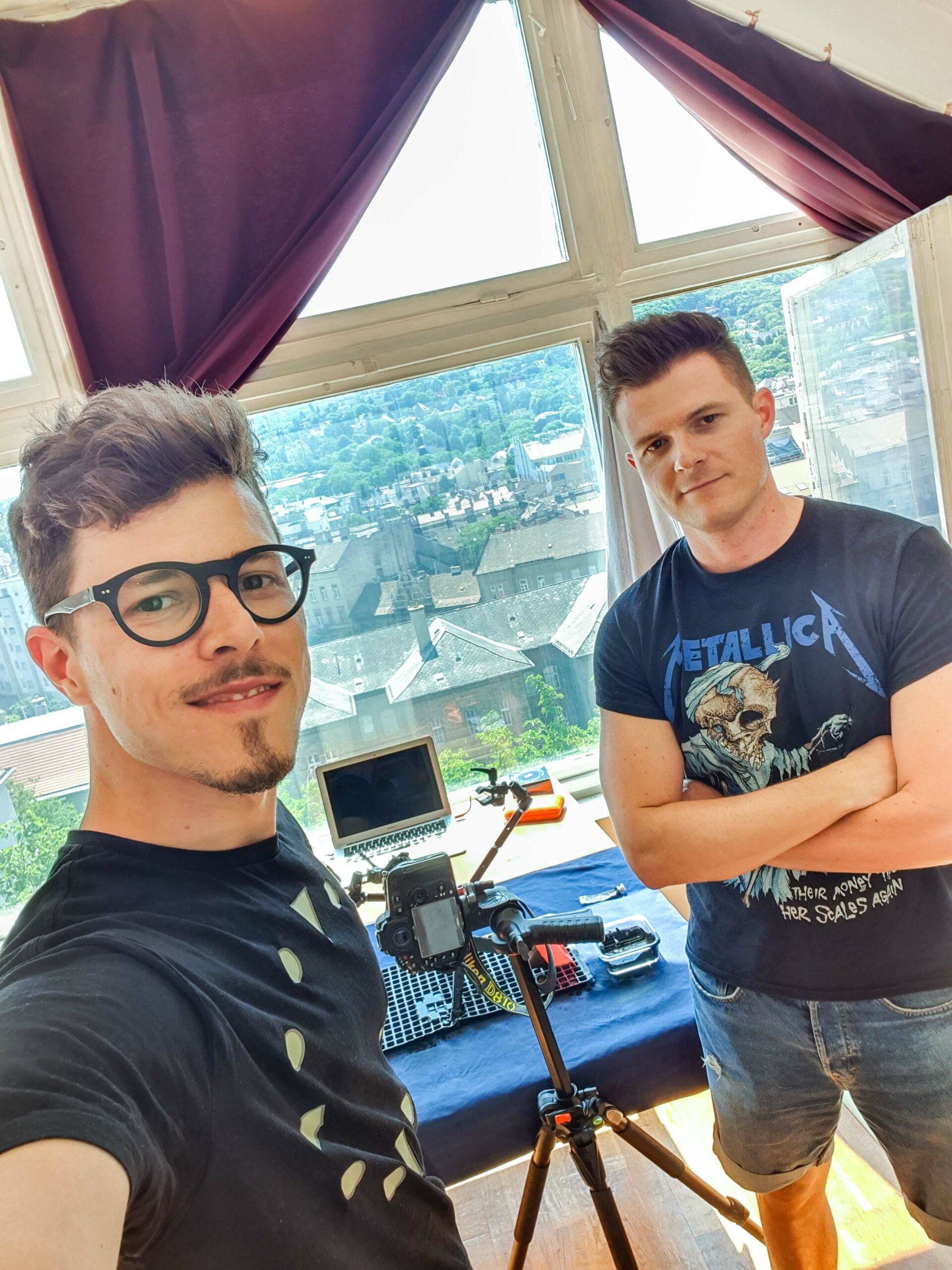 Tamás Fehér, watch drawing artist of the aBlogtoWatch Store, and our very own senior editor and photographer David Bredan worked on this latest product together.

We set things in motion by purchasing a brand-spanking-new DW5600E-1V and a large variety of black paints – preferably water-based, so we don’t destroy furniture, floors, and walls (or the otherwise indestructible G-Shock) in the process. We began experimenting with the various paints to find which one had the thick, shiny and spectacular texture that we had in mind. Soon, we found the one we liked most – all eyes were now on the 200-meter water-resistance of the DW5600. 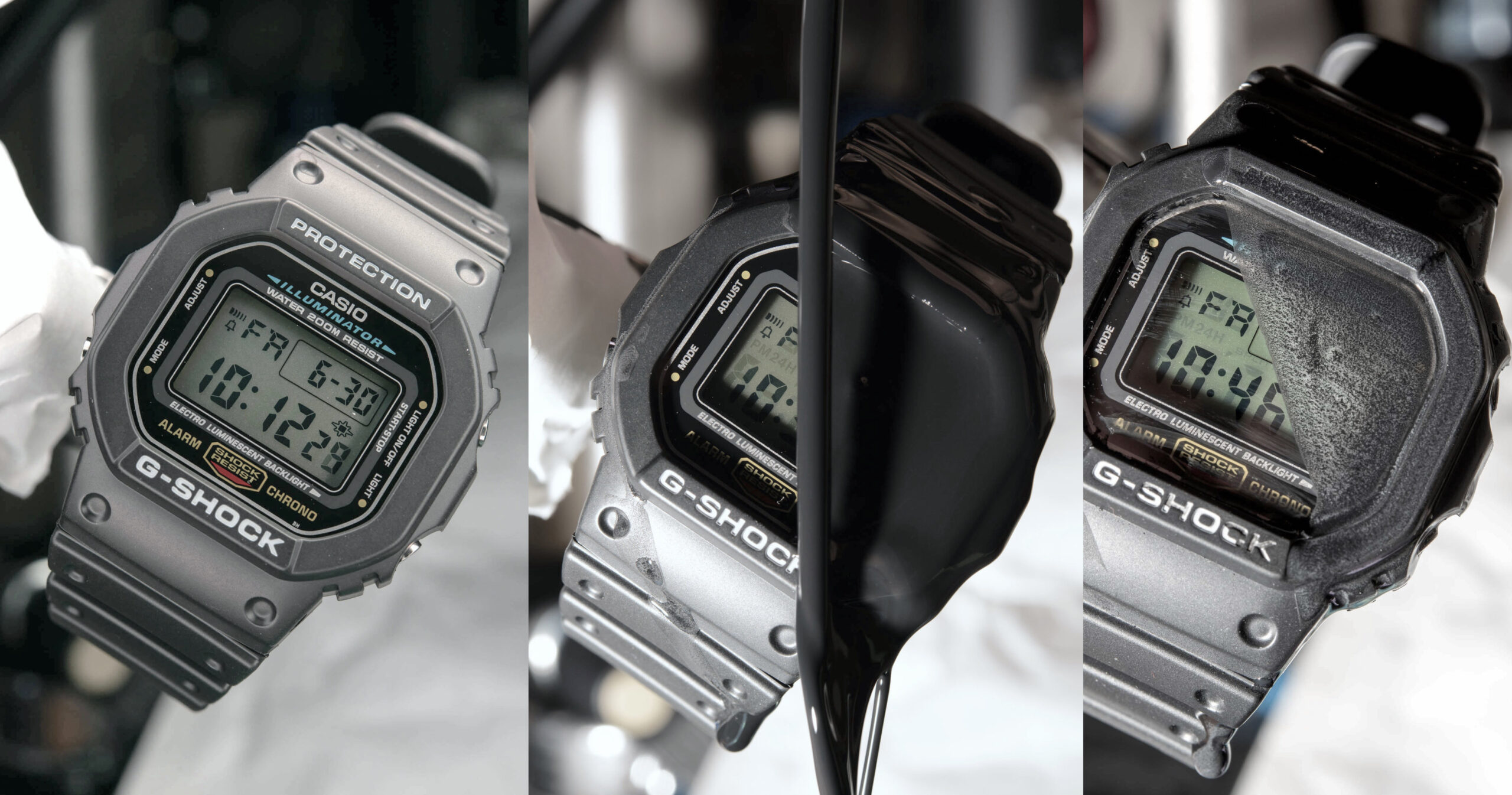 Tamás creates his artwork based on high-resolution, professional imagery that he himself modifies using his photoshop skills so that the digital sketch matches exactly what he has in mind for the hand-drawn art. In this instance, it was on our senior photographer David Bredan – Tamás’s compatriot – to meet with the artist and create from scratch the photograph that Tamás could then modify and draw. To hold the DW5600 firmly in place, the two used a custom-built tripod and clamp combination that our David created for a special type of watch macro photography. 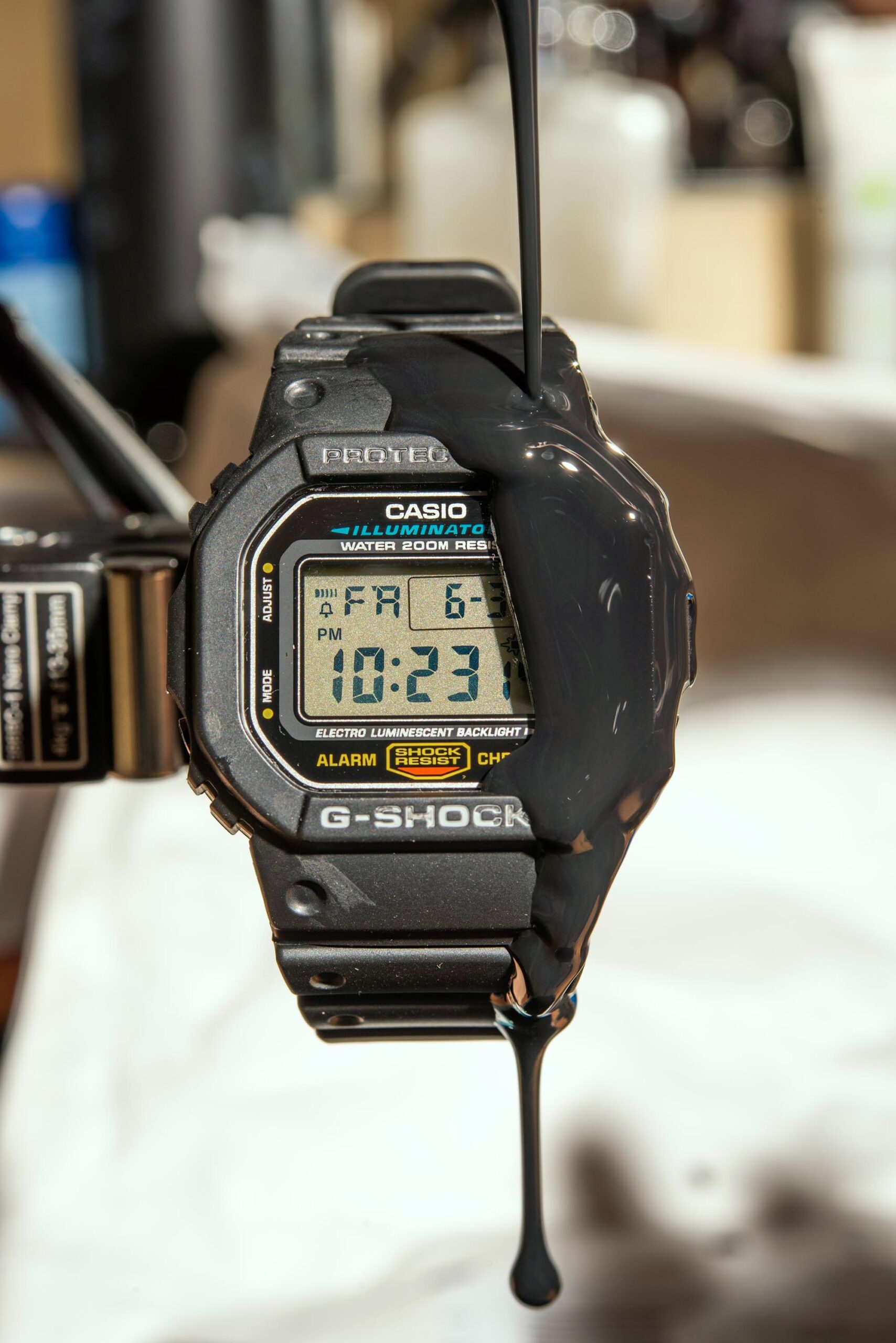 After a great many pours and tests – performed on two different locations to further experiment with the lighting and glare on the liquid – the two got closer and closer to an out-of-the-camera shot that could serve as the base for the finished art. The G-Shock did what it does best: It didn’t flinch, not even after having been covered in thick paint dozens of times, followed by increasingly more vicious cleaning procedures to get the white “G-Shock” and “Protection” texts of the bezel back to the original white. As simple and inexpensive a watch as it may be, its stubborn ruggedness and beautifully proportional design made this otherwise tiresome day a joyful one. Another day of watch appreciation. 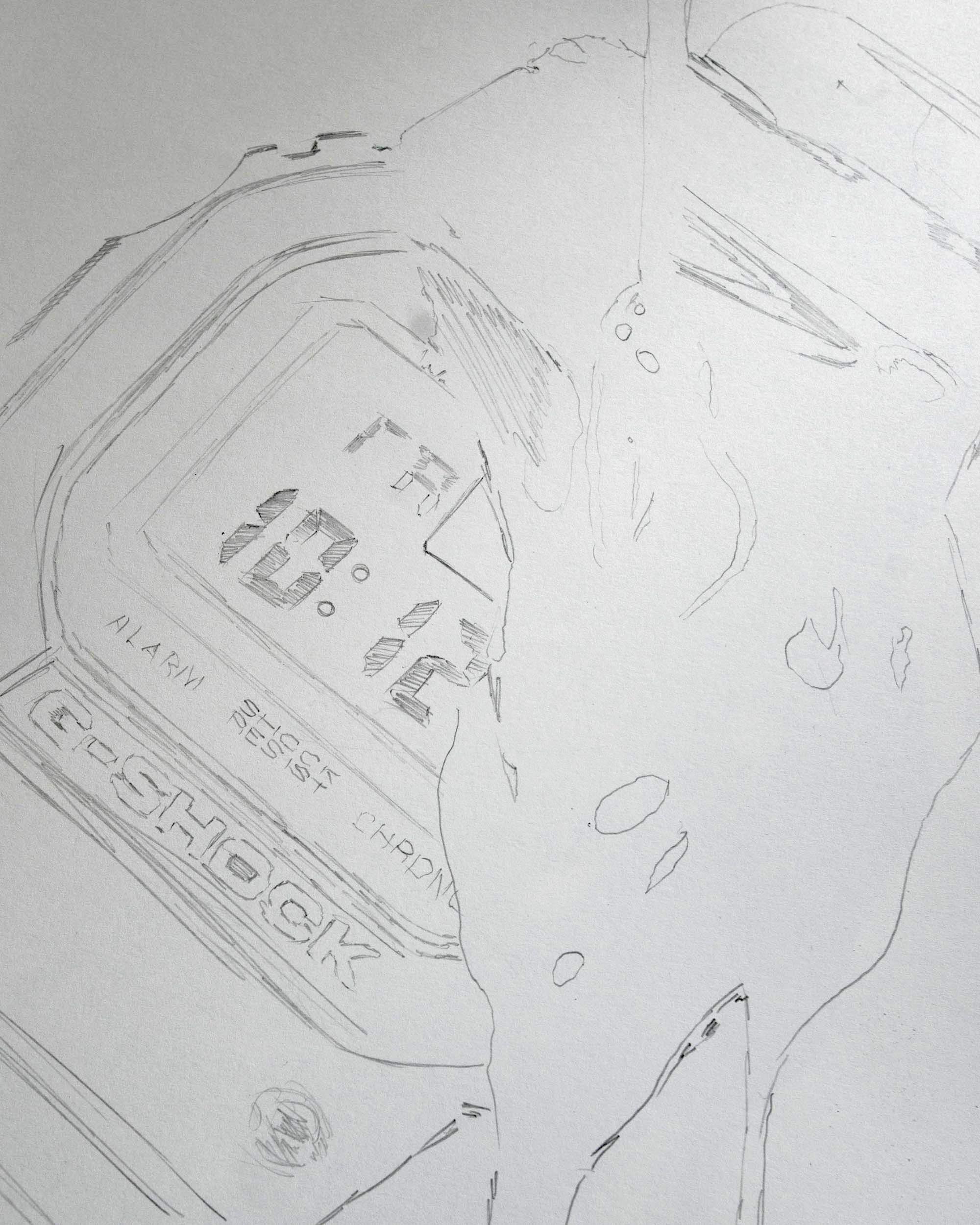 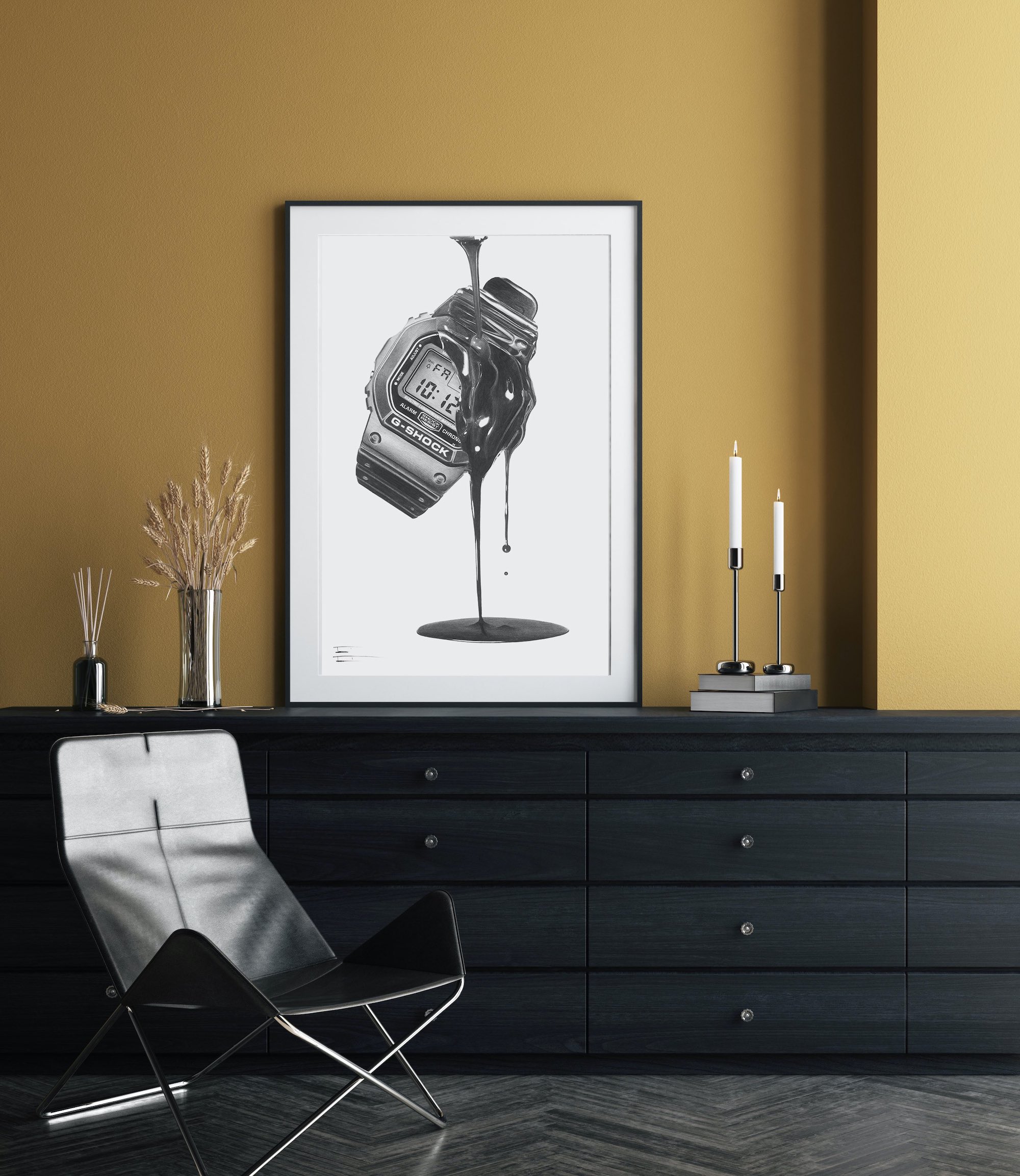 The end result? Hundreds of photos and dozens of digital sketches were followed by preliminary on-paper sketches like the one you see above. The finished drawing – which took 75 hours of tireless concentration to create entirely by hand – stands in shocking contrast to these early sketches: the attention to the finest details in the font styles, the peculiar aesthetic of the digitally displayed numerals, and the perfect shading on the black exterior all come together to really bring the DW5600’s much-loved design to a new scale. 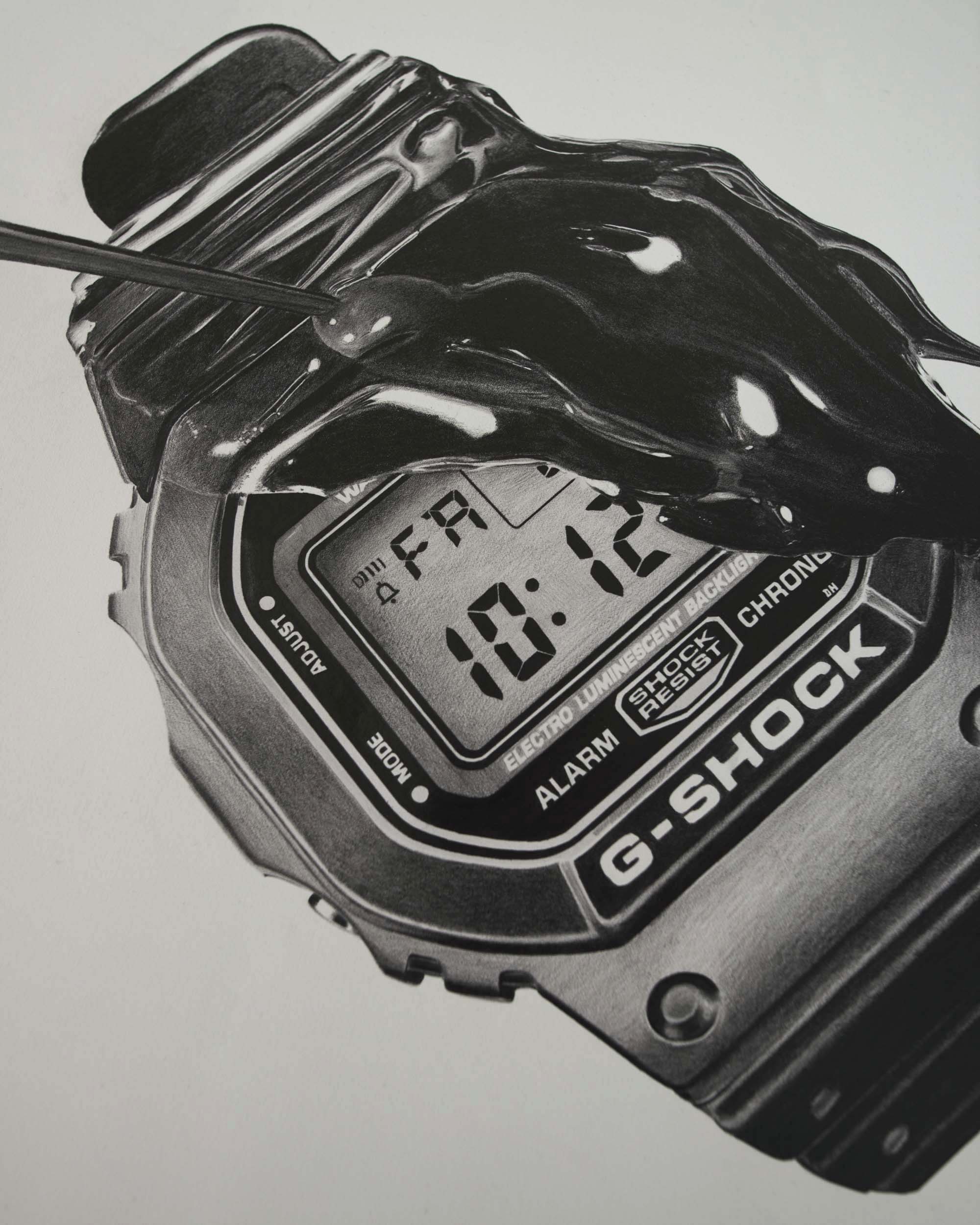 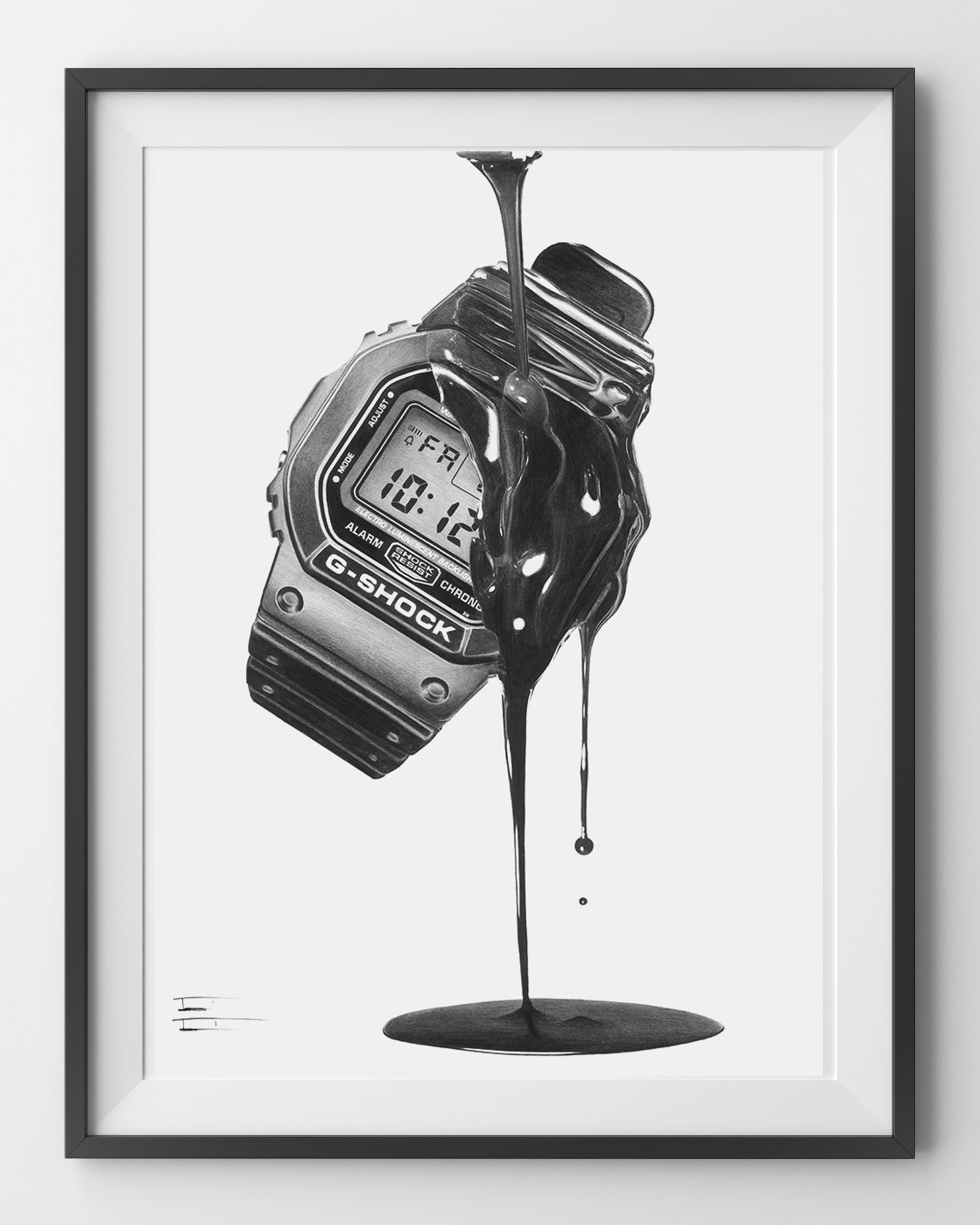 From watch photography to mighty impressive self-taught drawing skills, from a shared passion to all things watchmaking to well-received audience feedback — that is the journey of “Tribute To The DW5600 G-Shock,” the latest Horological Artwork that is now available on the aBlogtoWatch Store.

Browse a total of 12 Horological Artworks on the aBlogtoWatch Store or visit this link directly to get your “Tribute To The DW5600 G-Shock” artwork in the popular and easy-to-frame sizes of A3 and B2 (exact measurements are on the product page), priced at $149 and $199 respectively, with Free FedEx Priority Shipping to just about every country in the world.