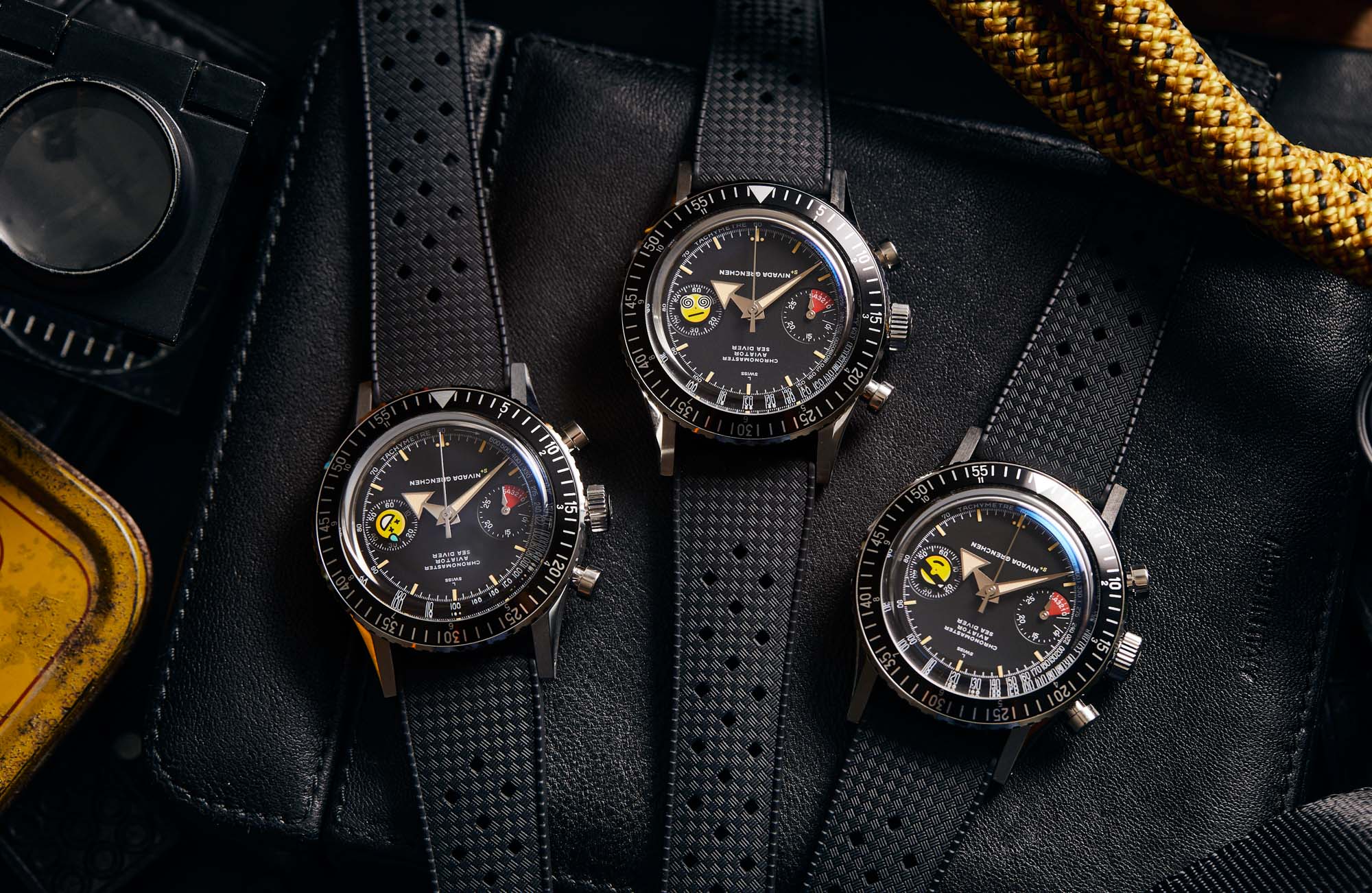 Best known for his modified vintage watch dials and seconds hands in particular, Paris-based seconde/seconde has the motto, “I vandalize other people’s products only because I failed at building mine.” Fully prepared for the armchair bullies of the Internet, Romaric André has joined forces with Nivada Grenchen to modify its CASD, i.e., the Chronomaster Aviator Sea Diver, into what’s now called the Chaosmaster. The collaboration includes Australian watch media and store Time+Tide, where all three-times 33 limited editions will be sold. 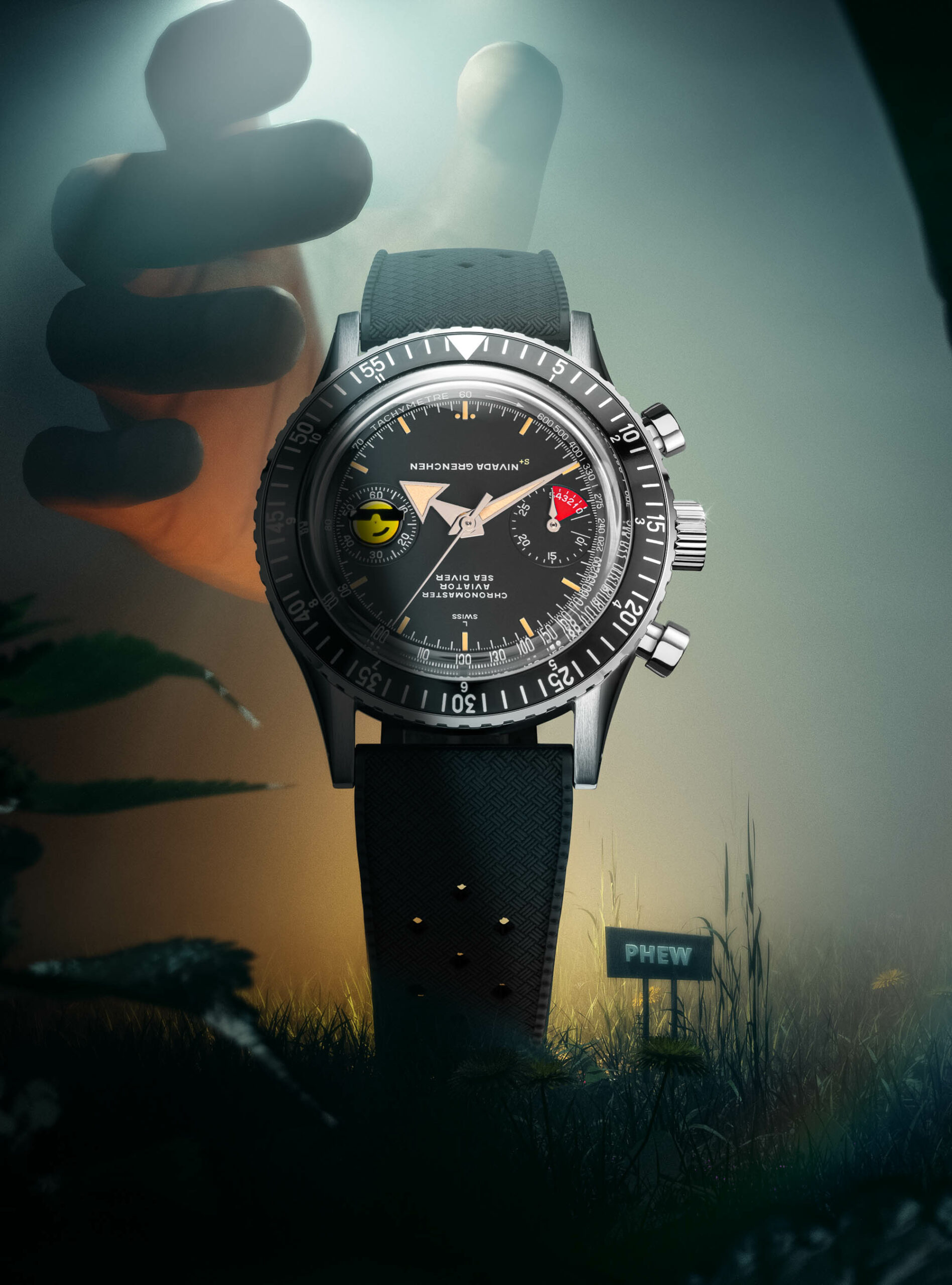 It’s rare that we highlight this, let alone kick a news article off with such a remark, but all parties involved deserve praise for the illustrations that accompany the launch of these 99 “neo-retro” watches. Dripping with a strong Bioshock vibe, these cinematic images try to convey the Chaosmaster’s concept: In what the creators consider to be a mad world that’s flipped on its head, they offer the wearer their own little way of self-expression through three different custom-designed, emoji-inspired seconds hand options. 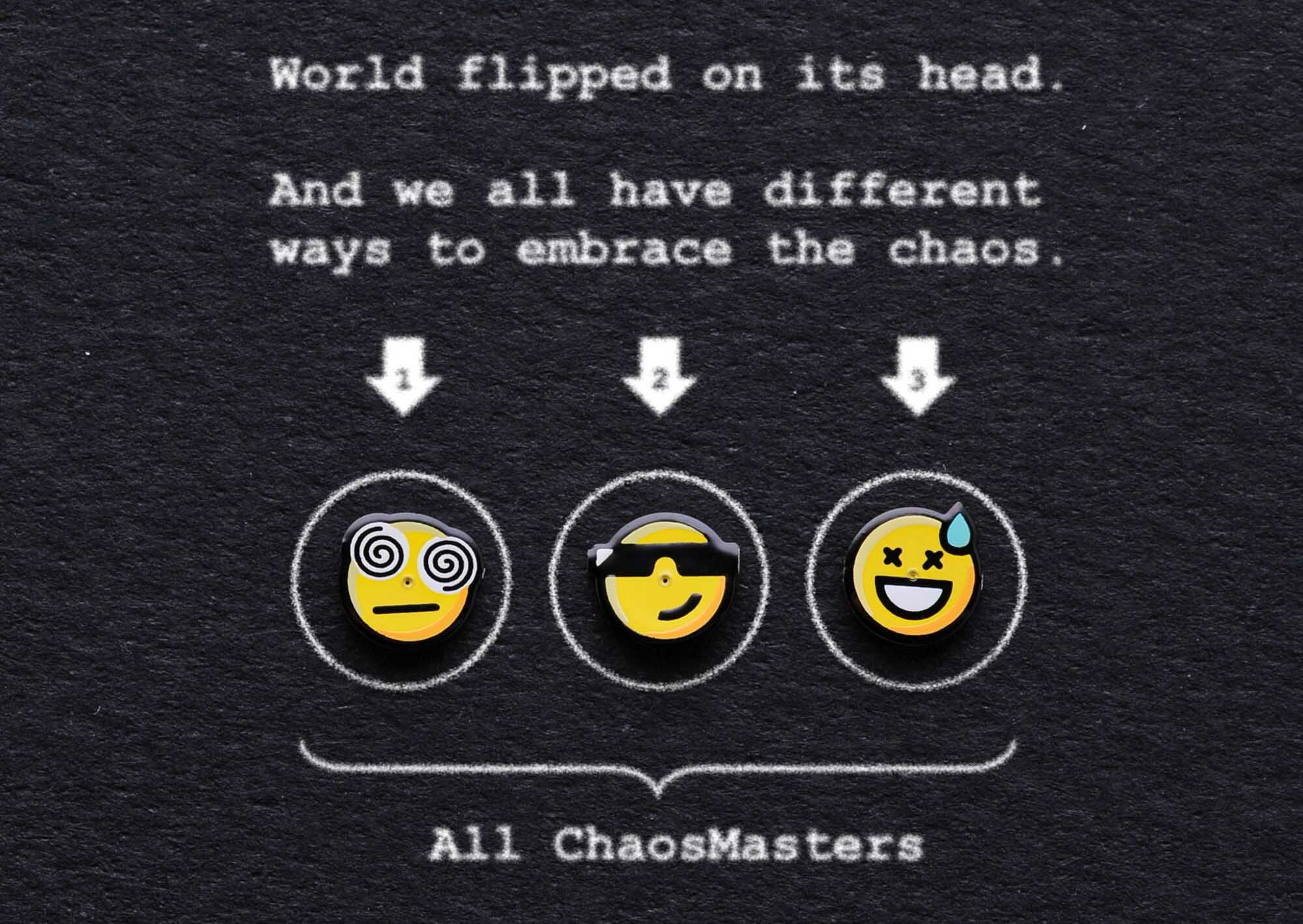 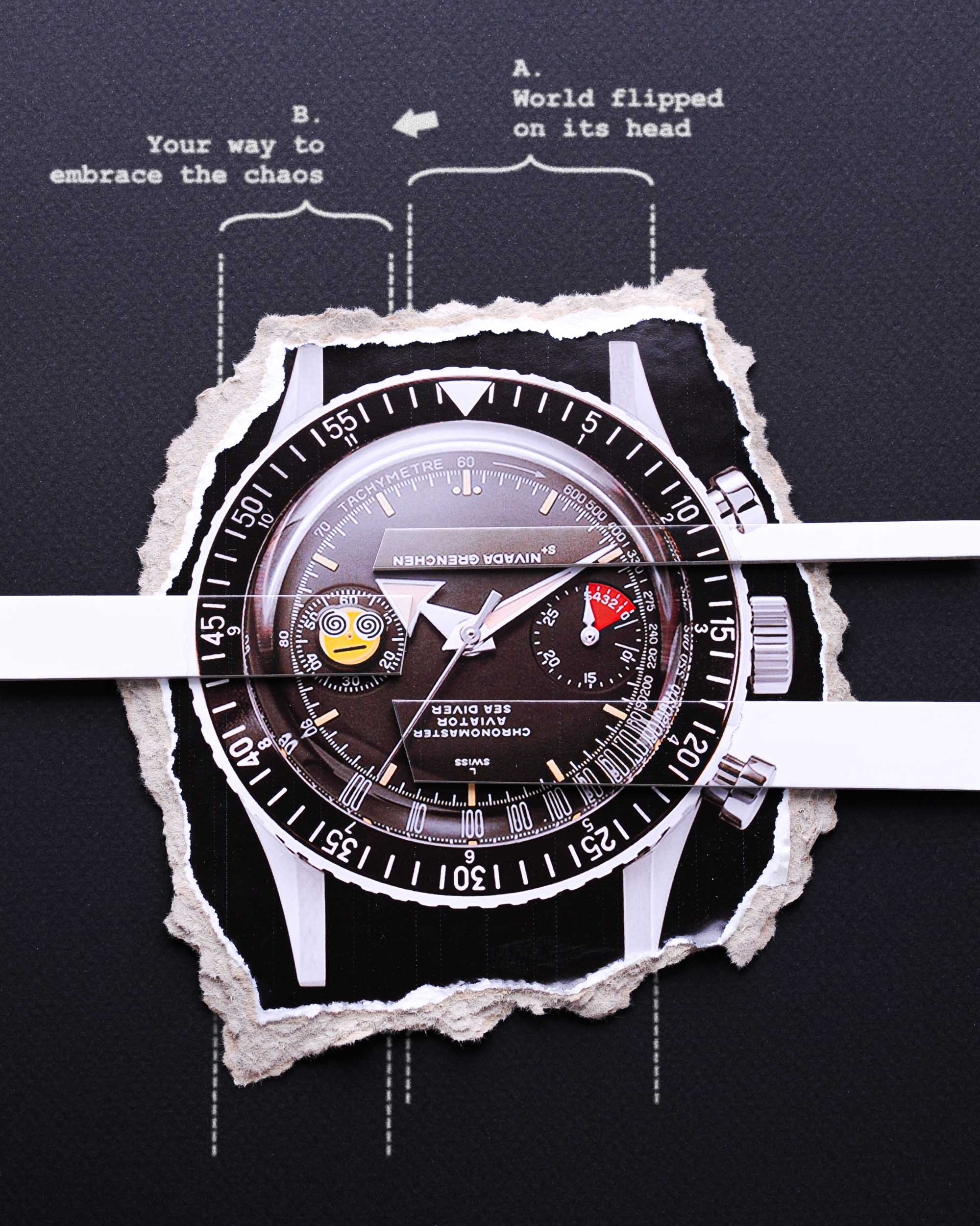 The mad world is represented by all the “Nivada Grenchen,” “Chronomaster Aviator Sea Diver, “and “L Swiss” texts being printed upside down on the dial — not something one is used to seeing on what, back in the day, would have been considered a serious wrist computer of sorts. With a timing bezel, chronograph, and tachymeter, the Nivada CASD offers a total of nine different functions, including basic, but also clever ones, like the five-minute countdown timer on the chronograph subdial, originally labeled as a “yachting scale,” i.e., a regatta countdown timer. 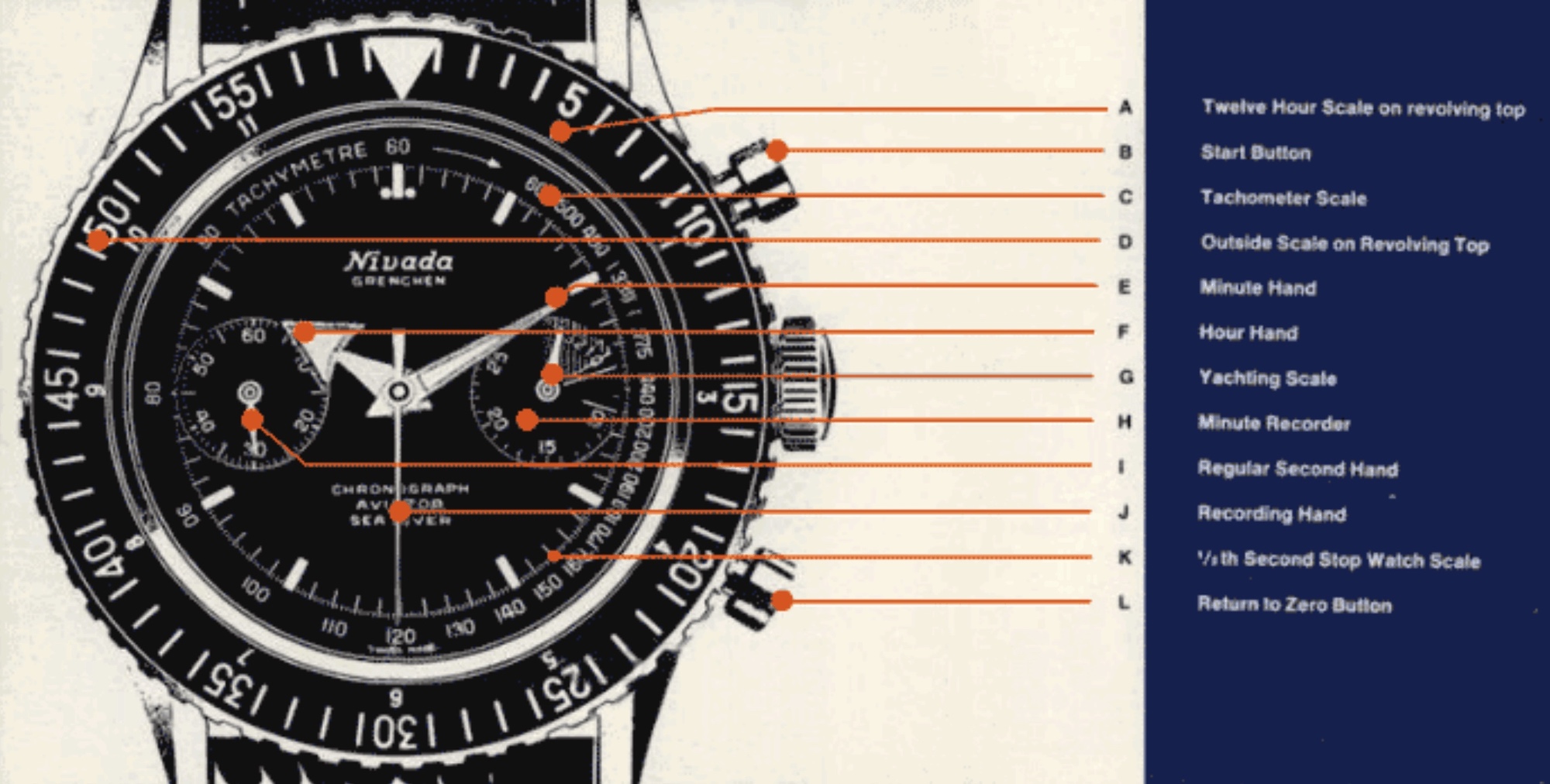 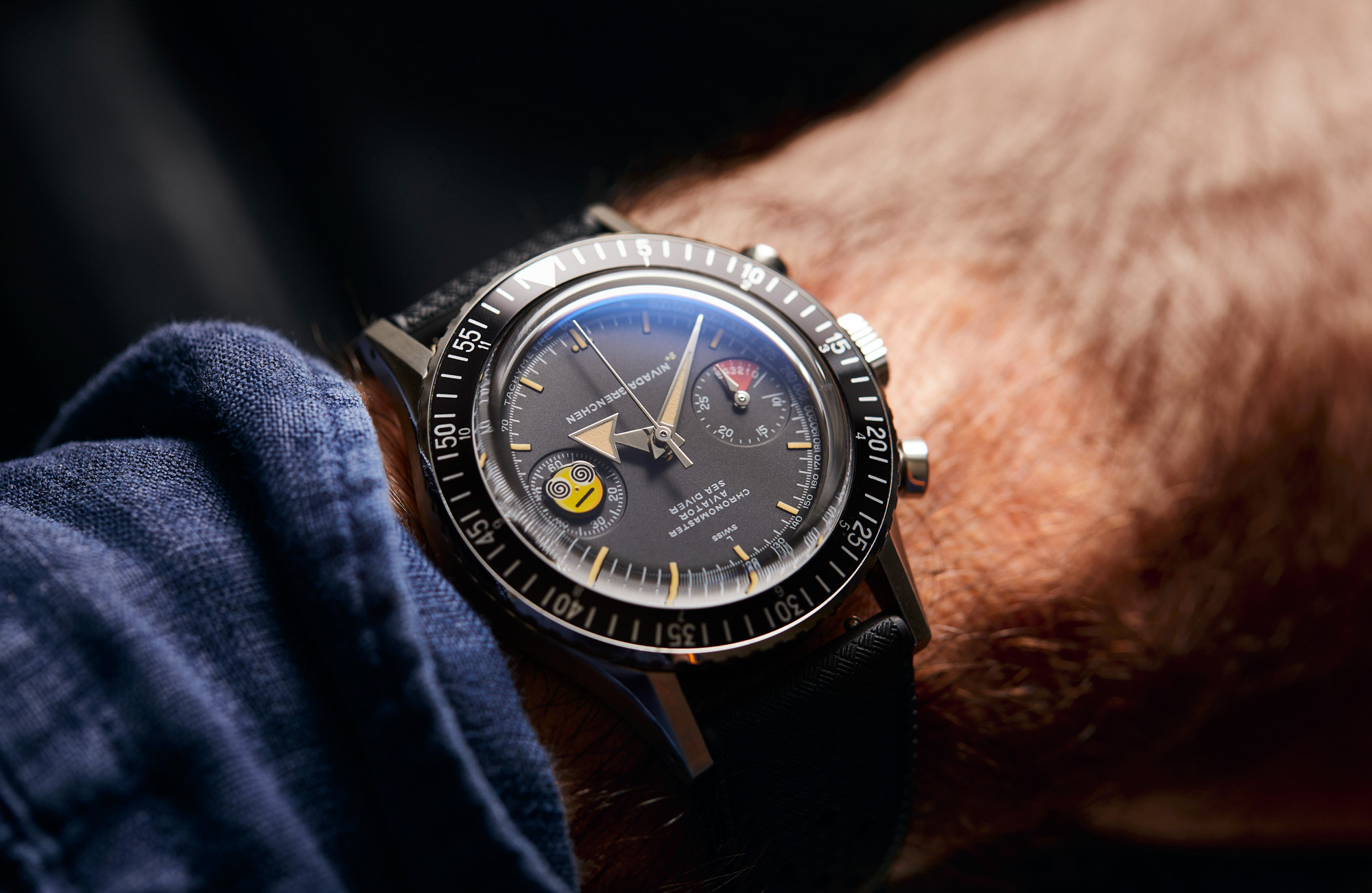 Nevertheless, the real star of the show is the vibrant seconds hand, a slight departure for Romaric, who usually works with center-mounted hands on the likes of vintage Rolex and Patek Philippe watches. Each of the three “hands” conveys a different attitude, or state of mind, from taking it easy through being on the verge of not even caring, to being completely overwhelmed. The idea is that at least one of these three will likely resonate with the 99 customers-to-be. As Romaric puts it, “Faced with the chaos of the world, we all have the right to react differently and to navigate or surf our way through the uncertainties.” 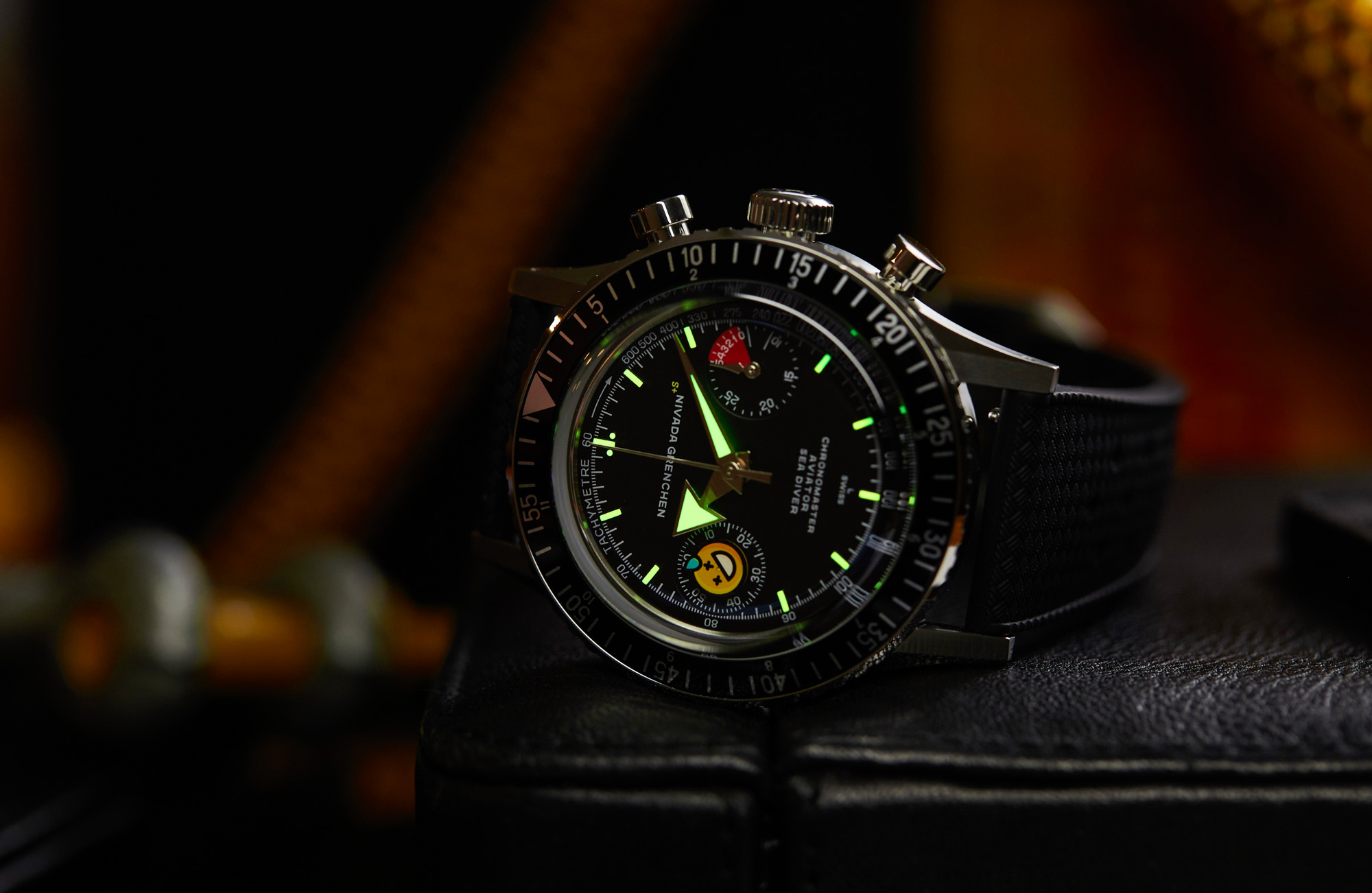 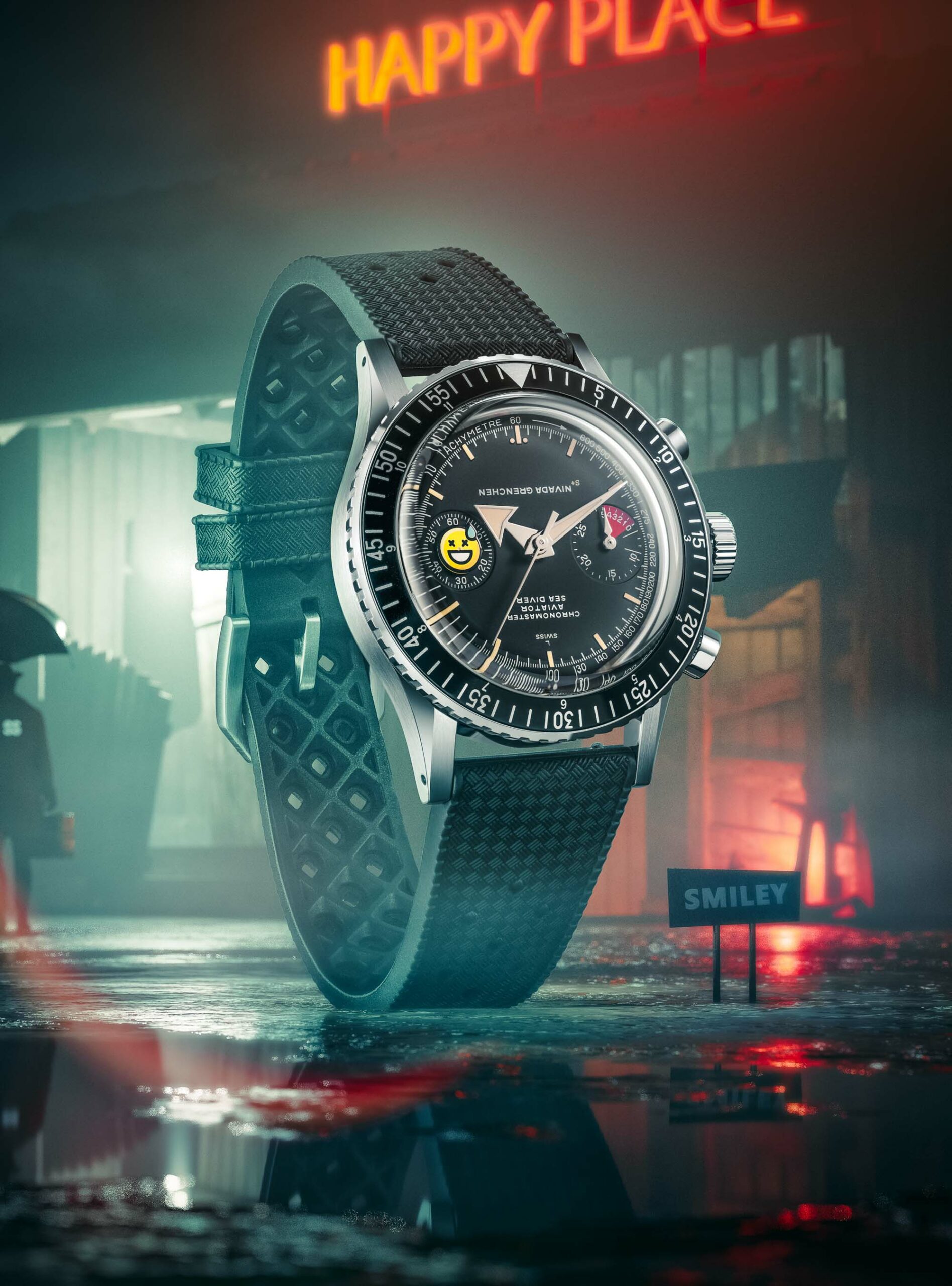 Notably, none of the essential functions of the Nivada Grenchen Chronomaster are compromised by these modifications. All the displays remain fully legible, and the continuous seconds hand still maintains its crucial role of indicating that the watch is still functioning. Without 200m water resistance and an ISO certification, the CASD is no blue-blooded dive watch, of course — but a continuous seconds display is handy to have not just on those, but also on uncertified, but serious divers’ watches like this one. 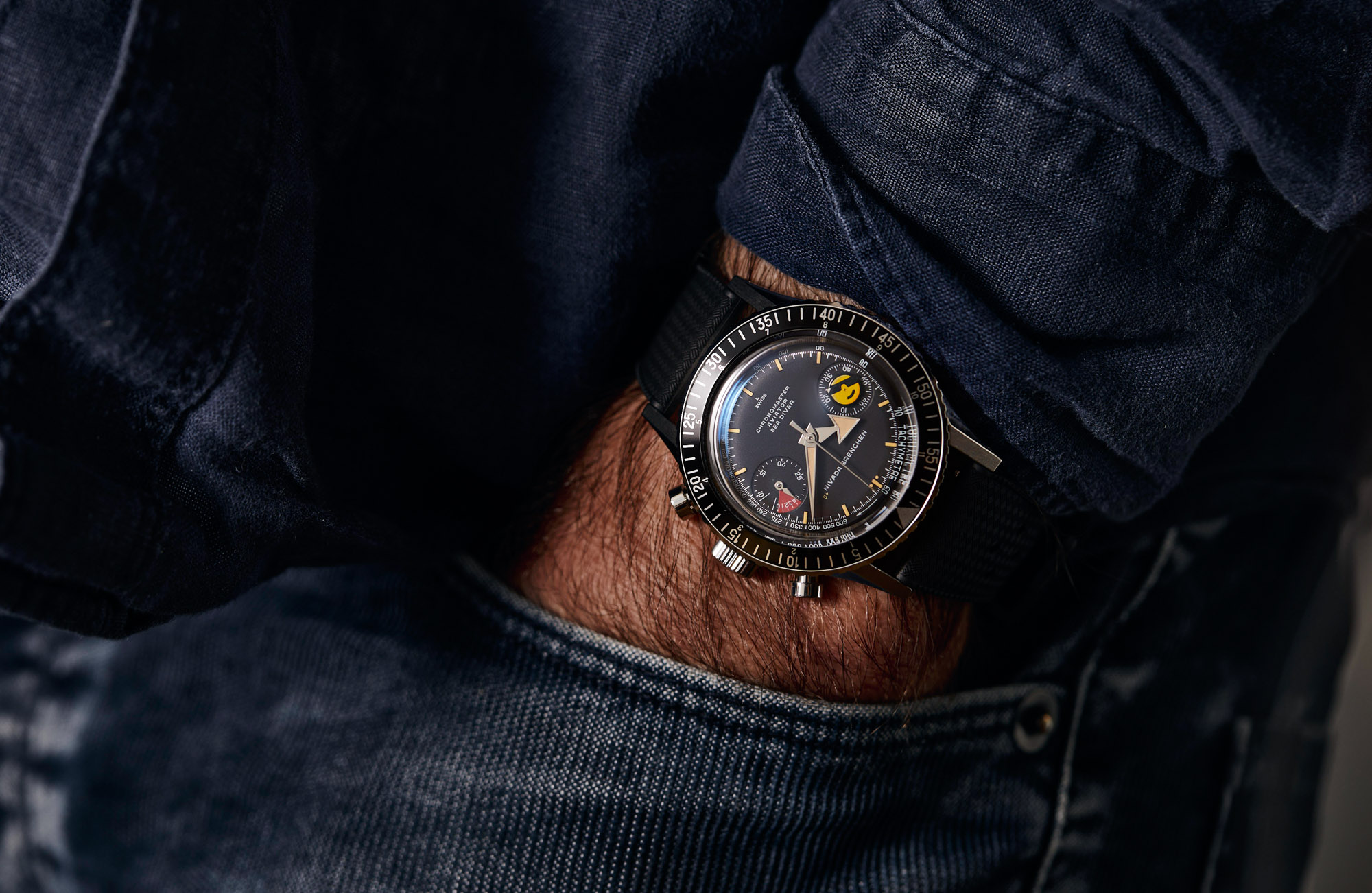 The 316L stainless steel case measures just 38mm-wide and 13.7mm-thick, sporting a 10ATM (100m equivalent) water resistance rating, which is actually half that of the 1960s original. The unidirectional bezel is in aluminum — prone to developing scratches and patina but in line with the 1963 origins of the CASD. That said, the front is not Plexi or Hesalite but double-domed sapphire crystal — a plastic variant, with a distinct haze and lack of definition, would have driven the vintage vibes home, albeit, again, at the cost of durability. 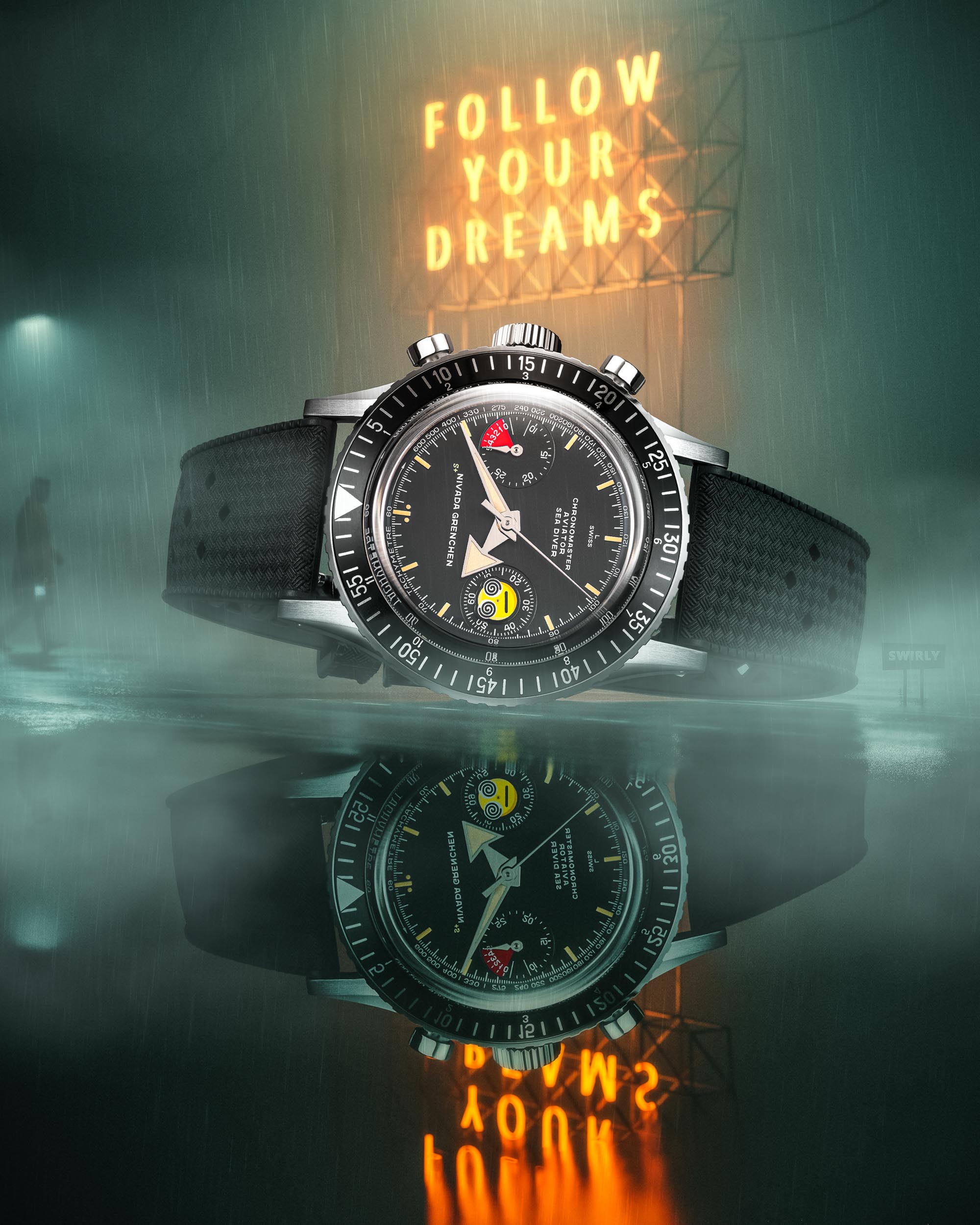 The Nivada Grenchen Chaosmaster comes on a tropic-style rubber strap, mimicking dive watch straps of the middle of the last century. Made of vulcanized rubber, Nivada claims it to be “virtually indestructible under any conditions, hot or cold, dry or wet, fresh or salty.” It is true that this type of strap has been enjoying new-found success lately, along with ’60s-style dive watches — Glashütte Original’s SeaQ 1969 springs to mind as a luxury watch sold on a very similar strap. 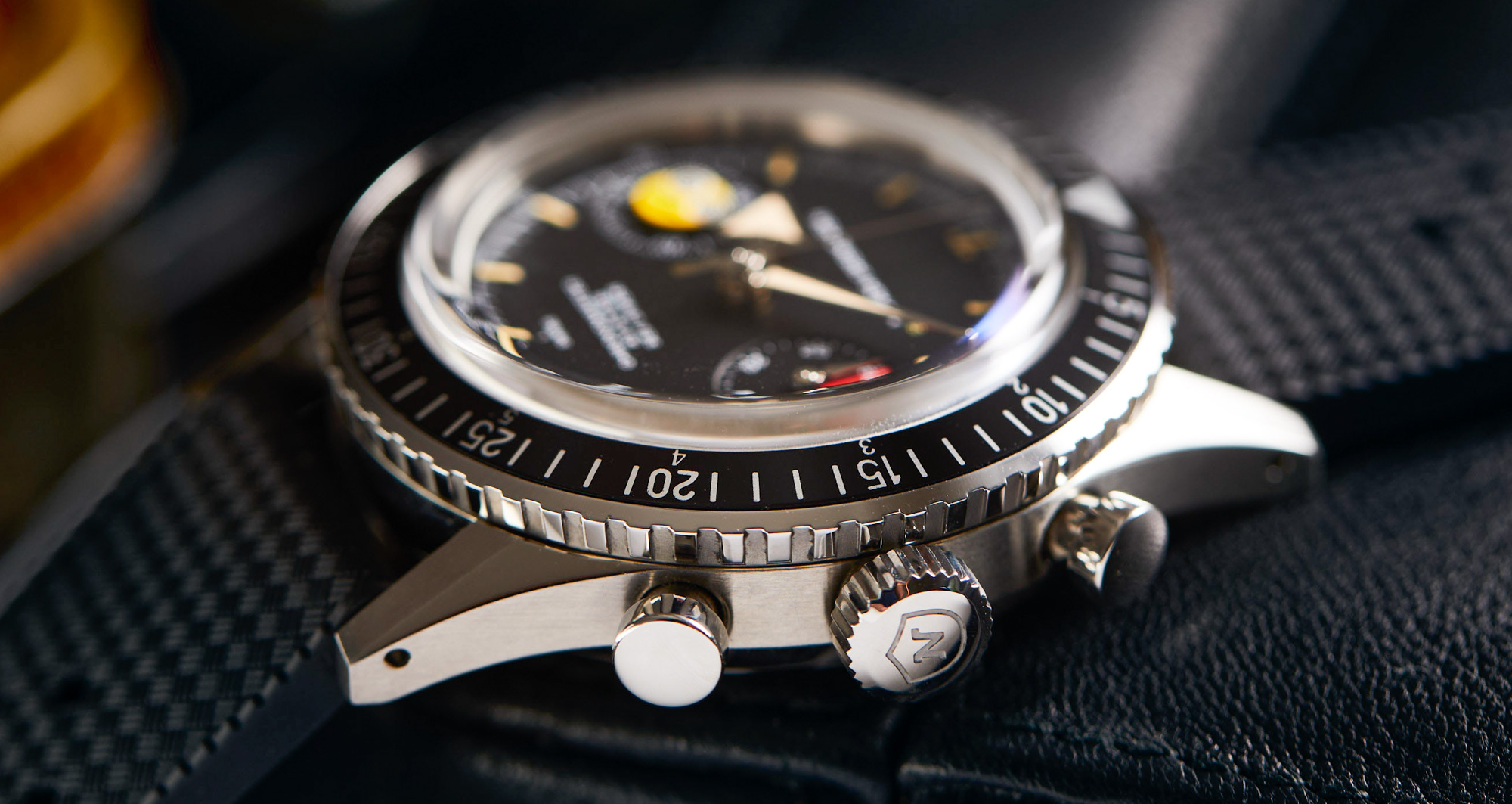 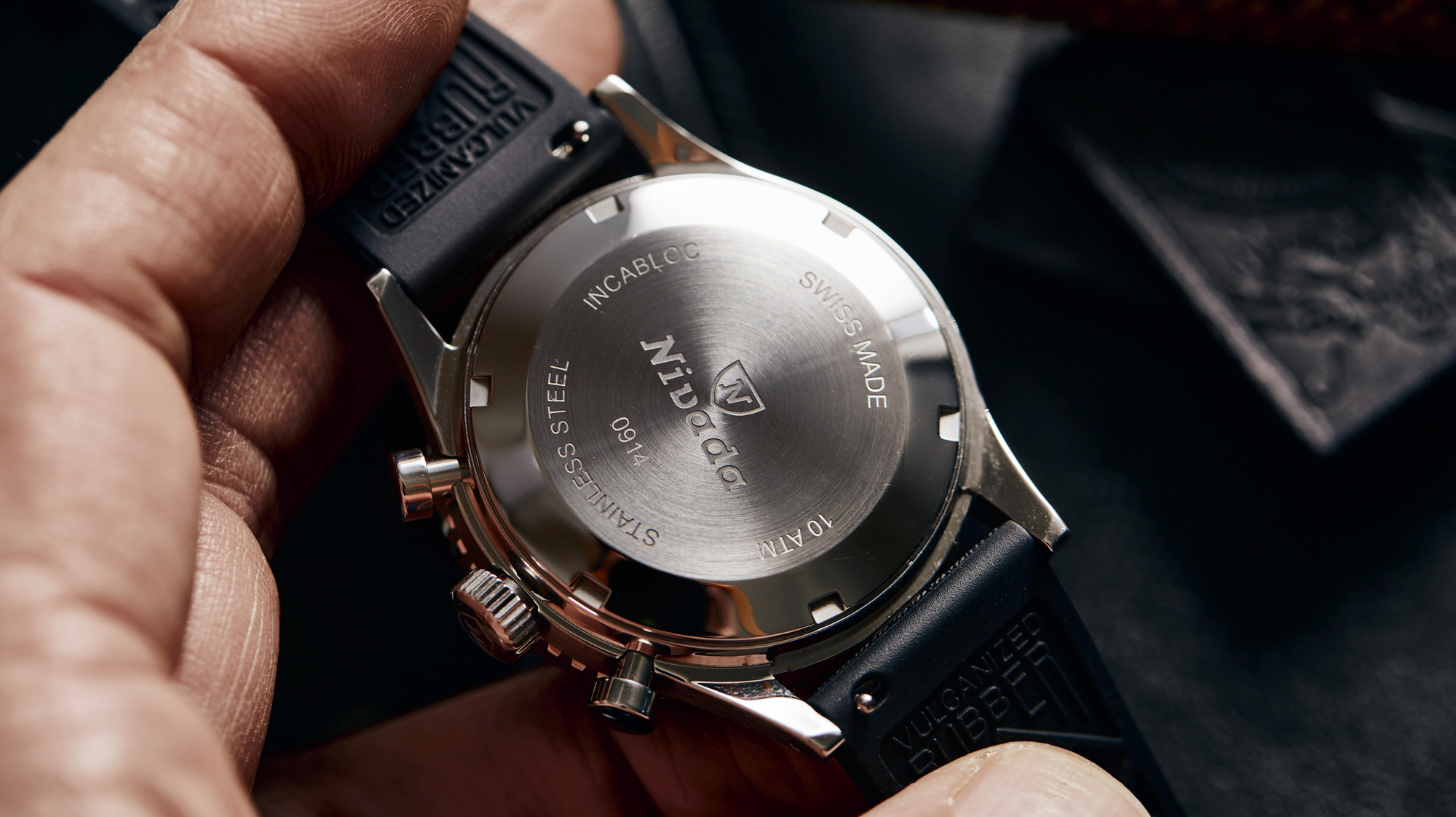 A screw-down caseback in solid stainless steel hides the Sellita SW510 M BH B caliber, a hand-wound version of the SW500 that, in itself, is Sellita’s alternative to the ETA/Valjoux 7750. The 7750 is celebrated as a workhorse movement, and anyone who’s ever owned one will perhaps not celebrate, but recognize it also for its thickness and loud, sometimes frantically spinning self-winding system. By making it hand-wound, the former is reduced (by 0.90mm), and the latter is entirely mitigated. Sellita has also worked on extending the power reserve for some of its calibers, and as such, the Nivada Grenchen Chaosmaster can run for 63 hours, over a half-day longer than the regular SW500. 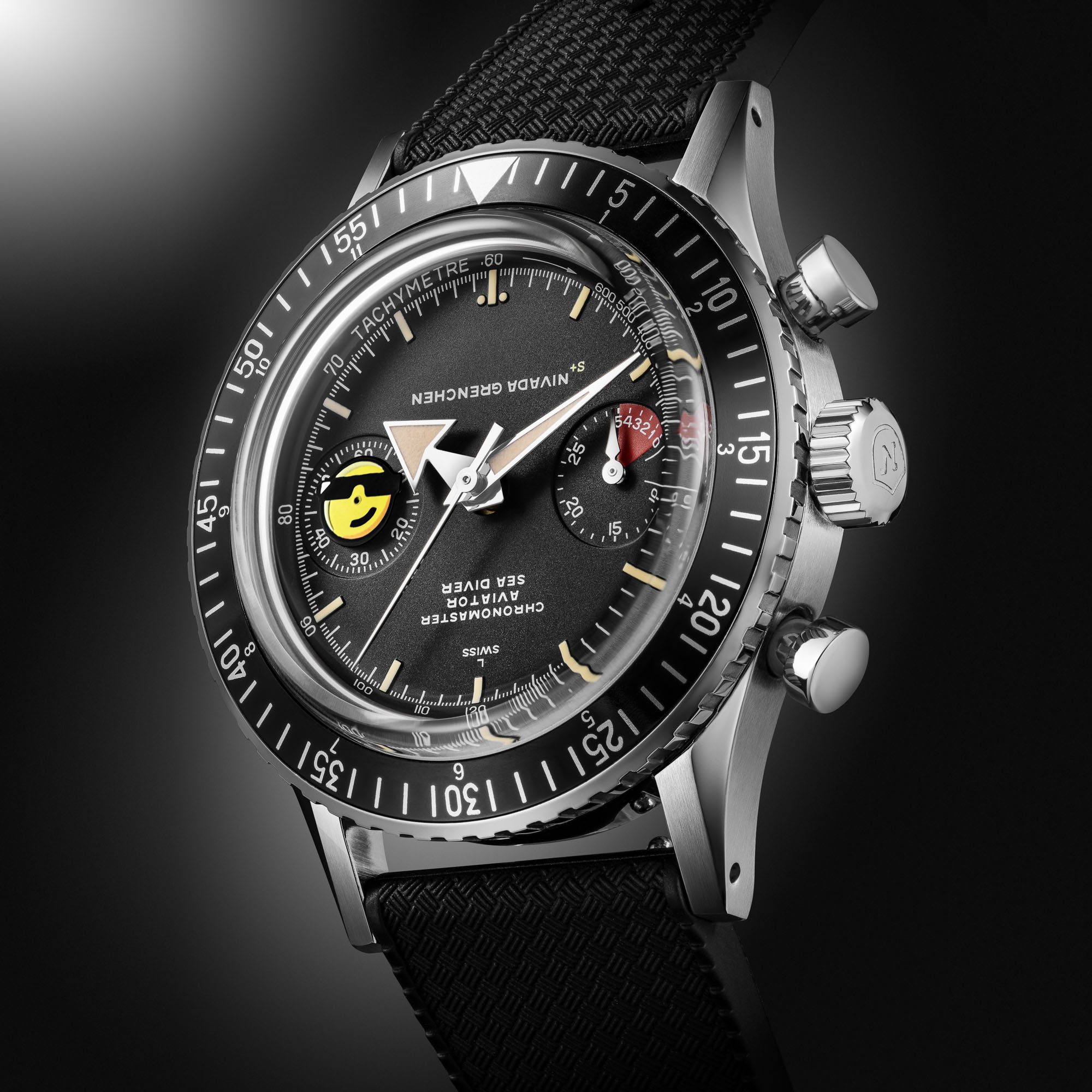 Keeping thickness at bay is also important given the moderate diameter of the case. The narrower the case, the less proportionate it will appear if it sits high on the wrist. The large-watch trend of the 2000s and 2010s could get away with bulky cases, as the 43-45mm cases responded better to the gains in thickness provoked by the more complicated, and therefore thicker, movements of modern times. Still, the Chaosmaster is bound to be a bit of a burger on the wrist — but it at least offers dependable water resistance, a raised sapphire crystal front, an extensive set of features, and an increased power reserve in return. 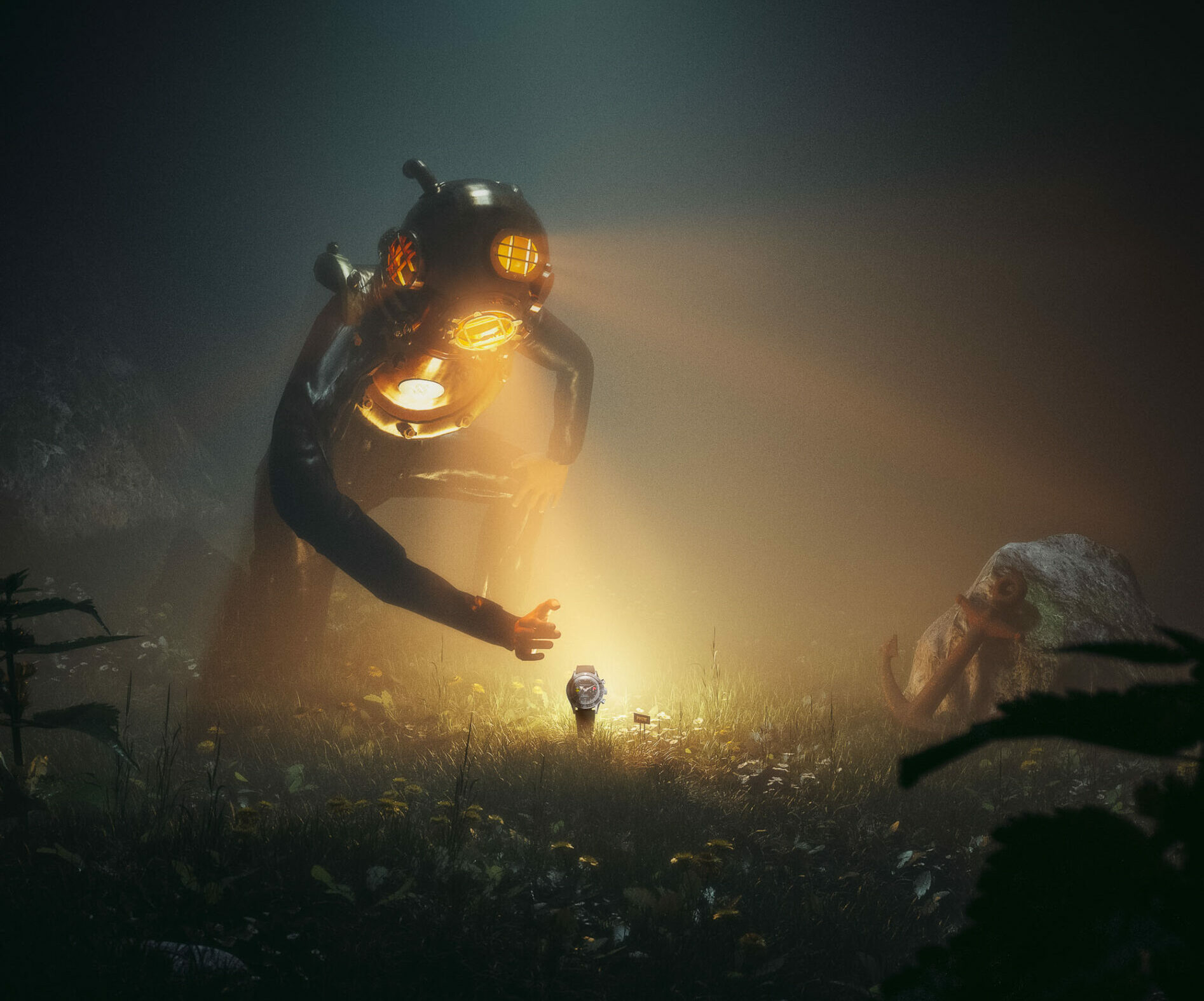 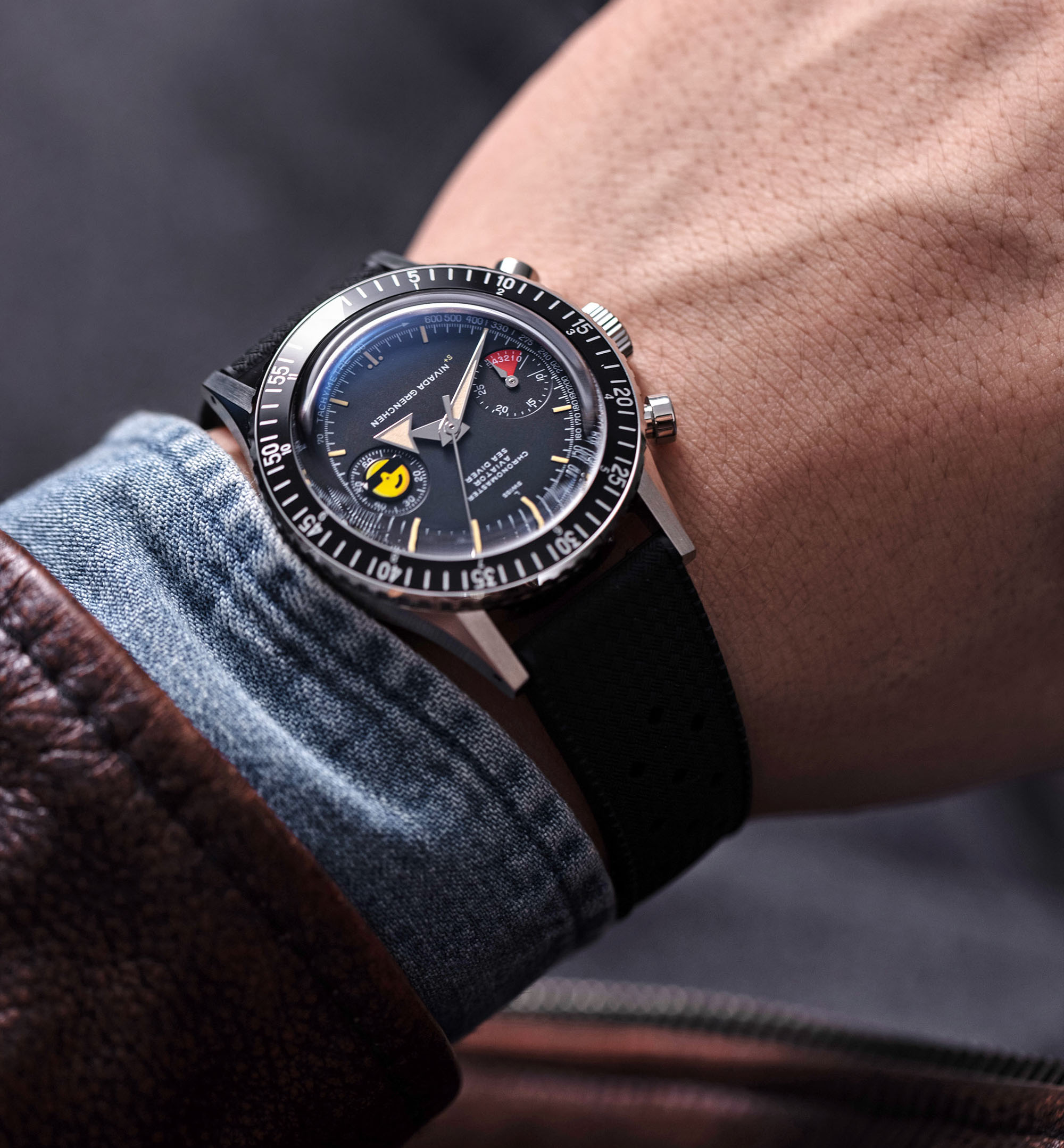 Some will, no doubt, will take issue with the emojification of a famed vintage design. The counterpoint to that is the fact that recent years have seen the debut of dozens, if not hundreds, of re-issues, tributes, homages, and anniversary releases from historic and resurrected brands alike — and none but a tiny fraction of those offered a lighthearted take on those past achievements. Watch industry giants like Longines, Jaeger-LeCoultre and others apparently have no choice but to trade fun and humor for a more pure, historically accurate take — otherwise, they would confuse or alienate their global following. By contrast, small brands can, and perhaps should, embrace creativity and foster talent, for a chance to stand out from a sea of safe, and arguably unimaginative re-releases. 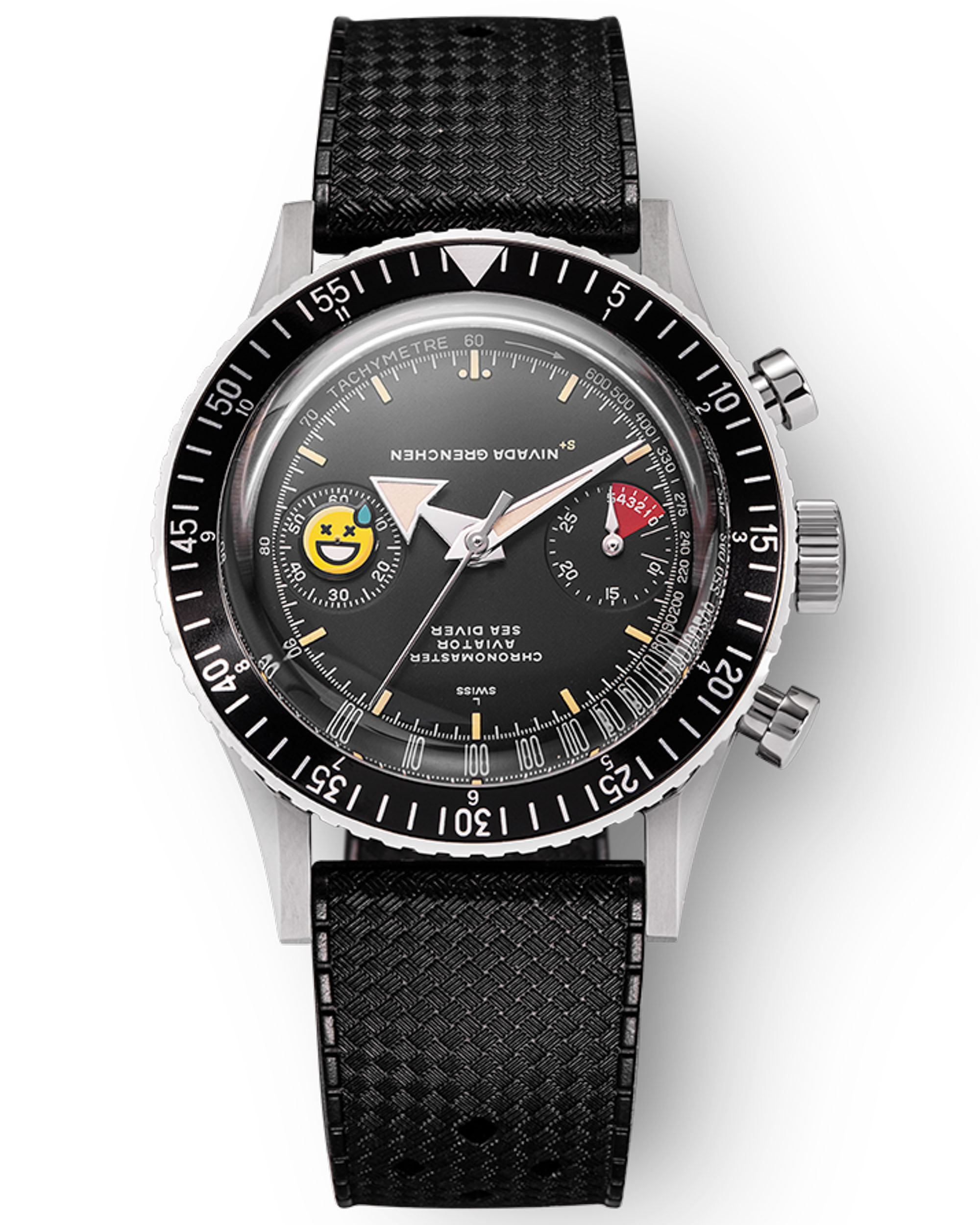 The Nivada Grenchen Chaosmaster stays true to the original where it would be blasphemy to make alterations and utilizes simple but effective techniques to spice things up in areas that hardly any sacrifice needs to be made. The Nivada Grenchen Chaosmaster is priced at $1,995 USD, is done in collaboration with watch designer seconde/seconde, and is sold exclusively by Time & Tide. Each variant is limited to 33 pieces. To learn more, visit the brand’s website.