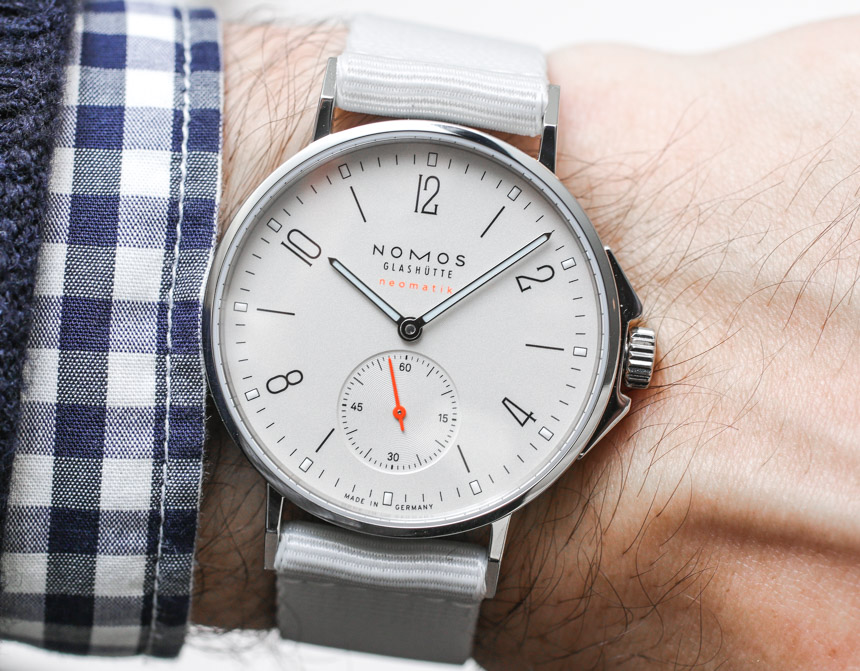 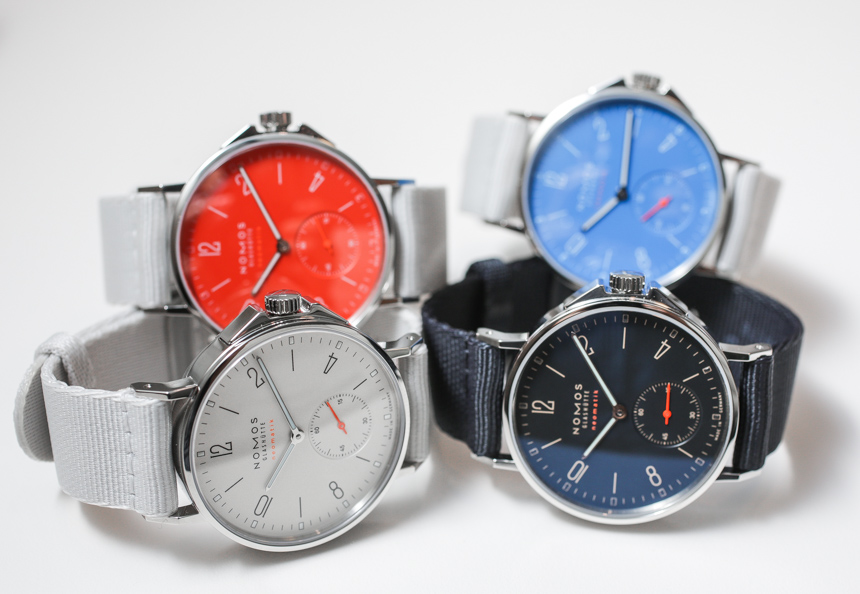 For the past five or so years, I have been watching the development of Nomos with great interest. Nomos was established in 1990 and so it is fast approaching its 30the anniversary now. In the past couple of years, the German brand has slowly but surely not just expanded its collections but also developed its own movement. Now, for Baselworld 2017, we see the new Nomos Ahoi Neomatik which is the culmination of these efforts on both fronts, and we had the chance to handle these watches at the show in red, blue, black, and white dial options. Interestingly, when looking at previous Ahoi watches, the new line shrinks in case size to now house the in-house DUW 3001 caliber that Nomos introduced back in 2015. 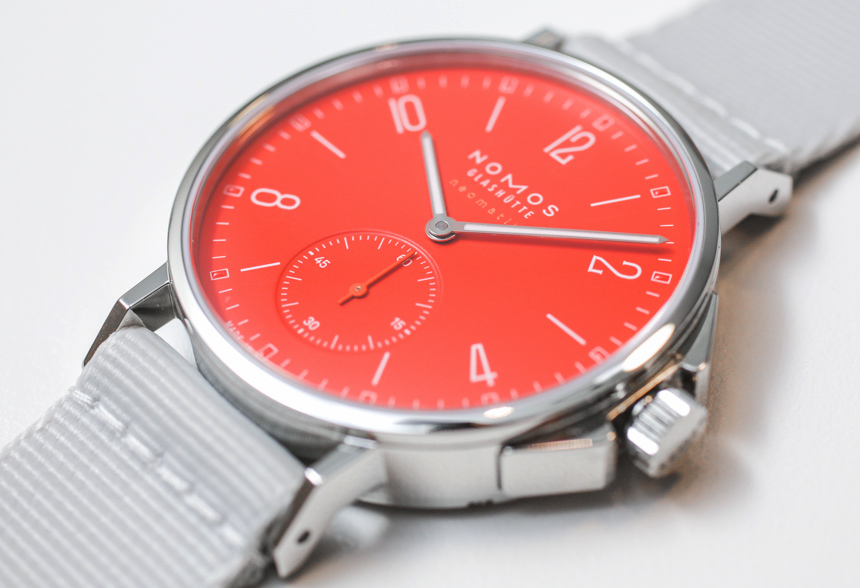 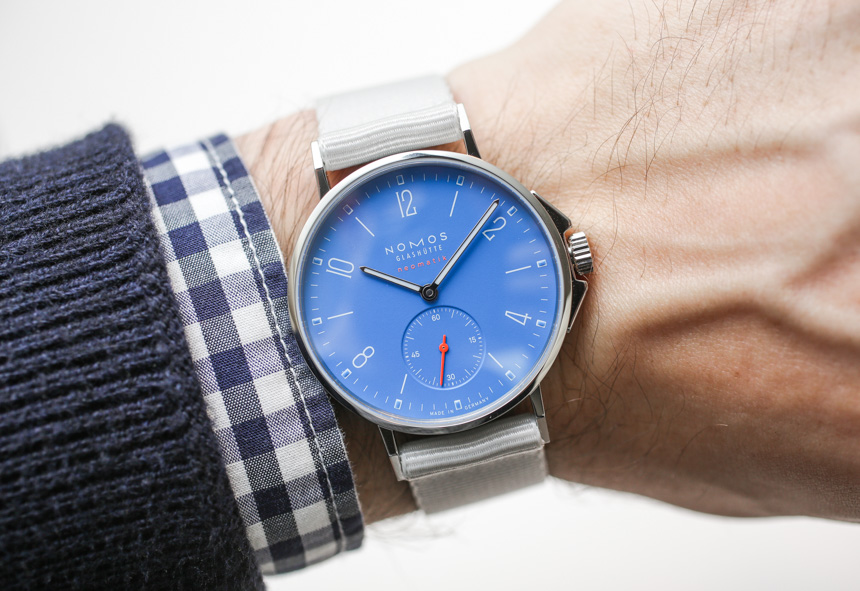 The Nomos Ahoi is one of Nomos’ newer collections. It was introduced in 2013 as their dive watch collection. Unlike other Nomos watches, it has luminous hands and markers, a screw-down crown, a beefier case, and higher water-resistance of 200 meters. Neomatik, on the other hand, refers to Nomos’ watches that are powered by their in-house DUW 3001 movement. So in the case of the Nomos Ahoi Neomatik, it refers to their sporty Ahoi watches fitted with their DUW 3001 movement. 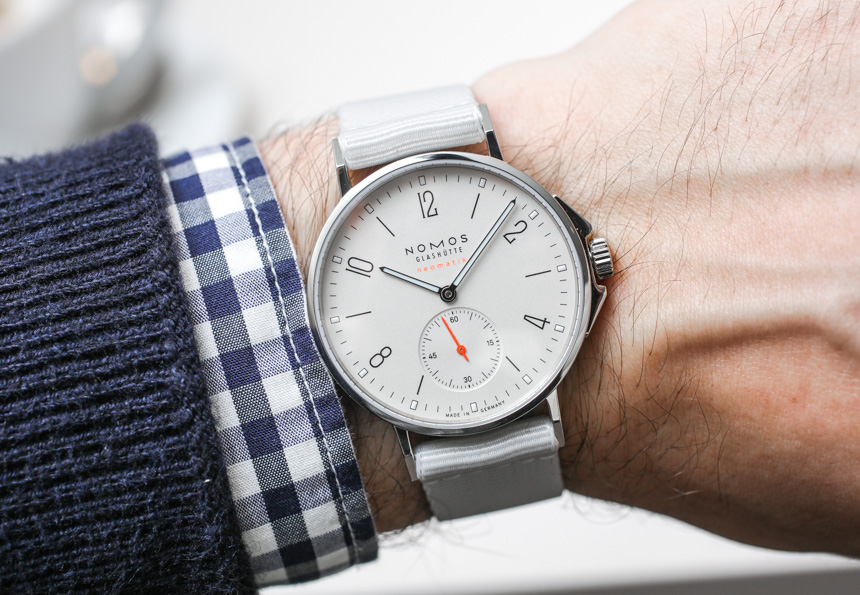 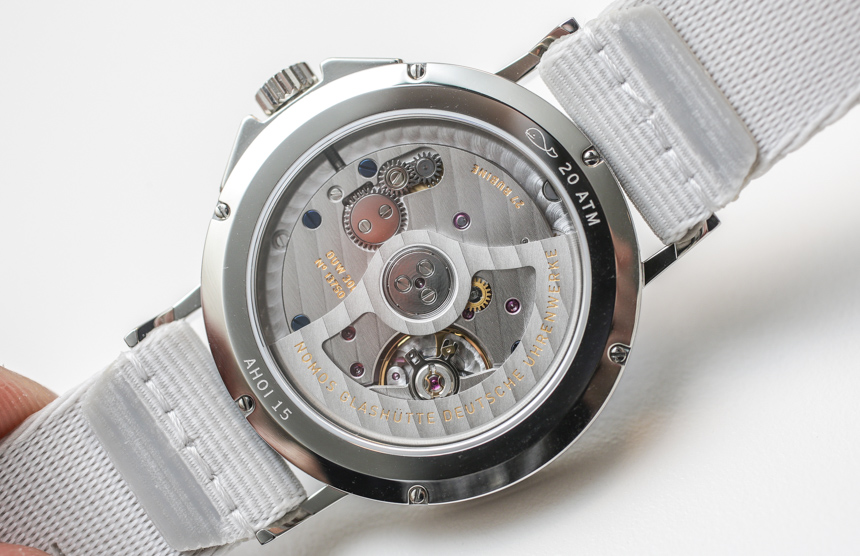 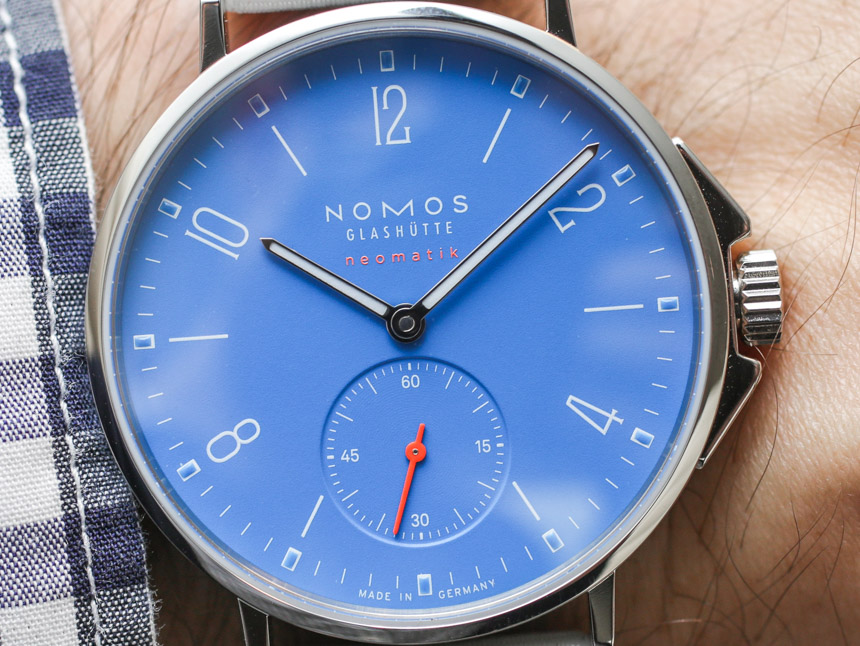 That said, the Nomos Ahoi Neomatik is markedly different from the earlier Nomos Ahoi watches. There are four new Nomos Ahoi Neomatik models in total, and while they are all made out of stainless steel, the case size is actually smaller. The earlier Ahoi models were 40mm wide and around 10.6mm thick, but these new Ahoi Neomatik watches are just 36.3mm wide and 9.55mm thick. This means they are significantly smaller than their predecessors. However, because of their long lugs and beefier case construction, they do not wear as small as their case dimensions would suggest. On the wrist, they could be mistaken for 38mm watches. 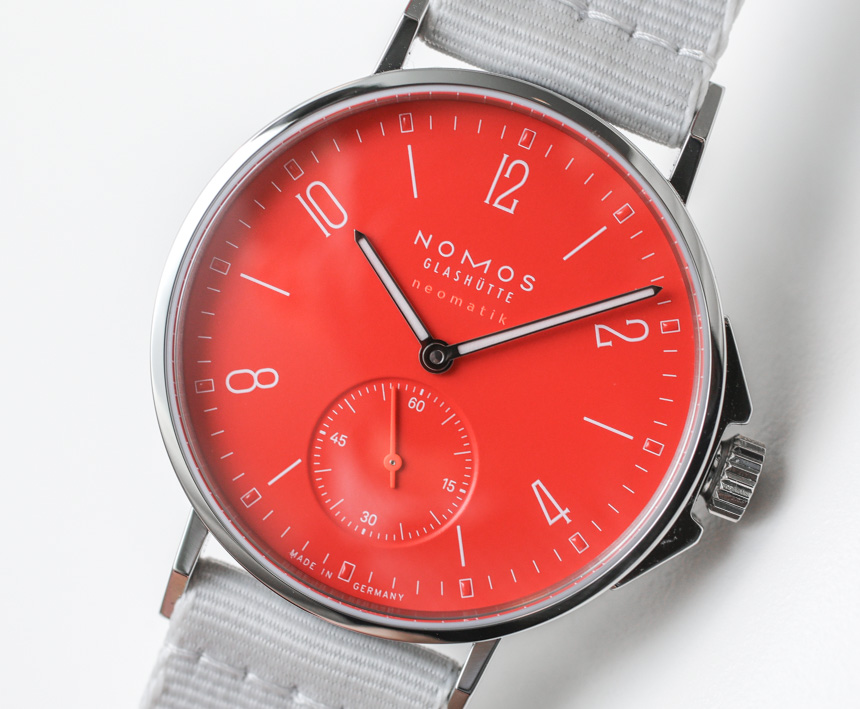 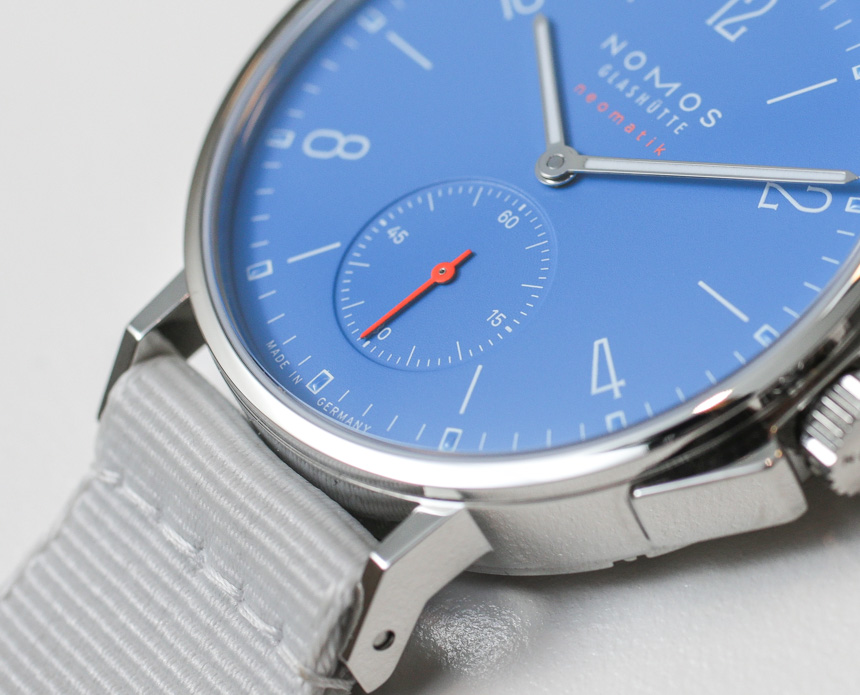 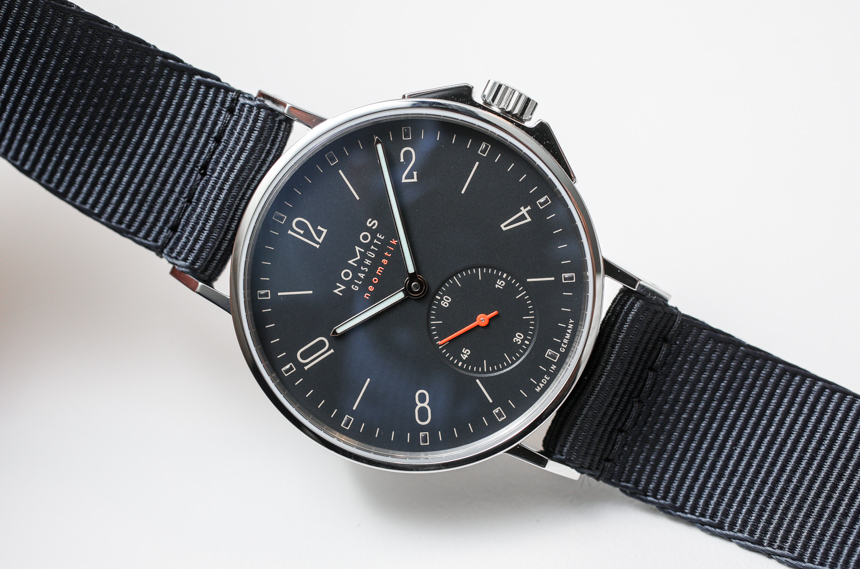 Like the earlier Ahoi watches, the new Nomos Ahoi Neomatik watches have a water resistance of 200 meters, which makes them suitable for recreational diving. To ensure water-resistance, the Ahoi Neomatik has a screw-down crown protected by very subtle crown guards. The case back is see-through sapphire, which is a nice touch, because it is not very often that you see dive watches with display case backs. Plus, with the display case back, owners can more easily appreciate and admire the in-house DUW 3001 movement within (more on the movement later). The watches also come with a textile strap, which will hold up to water better than the usual shell cordovan straps that most Nomos watches have. The textile strap feels nice on the skin and, along with the smaller case size, really contributes to the wearing comfort of these new watches. 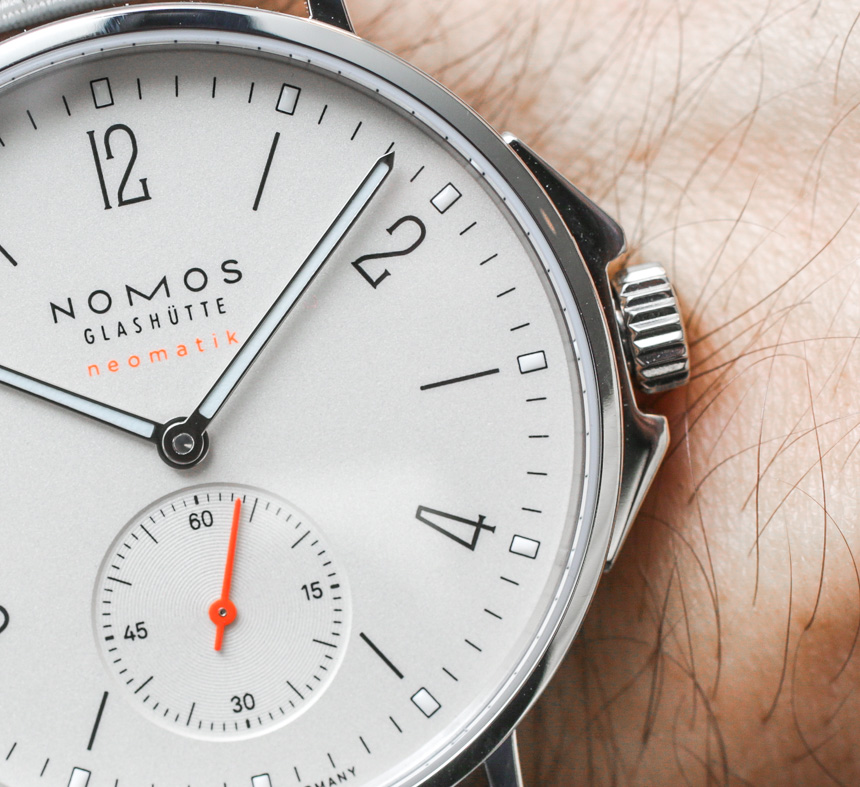 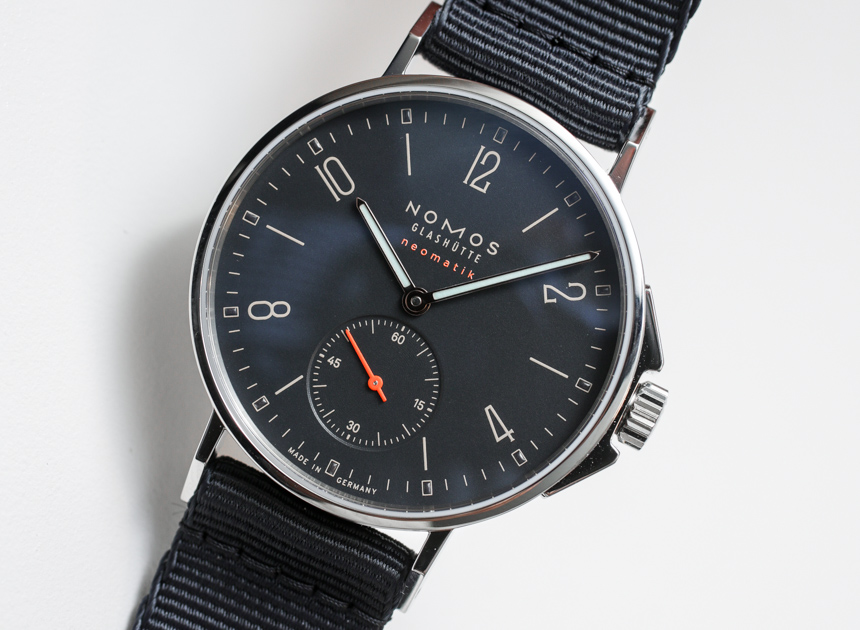 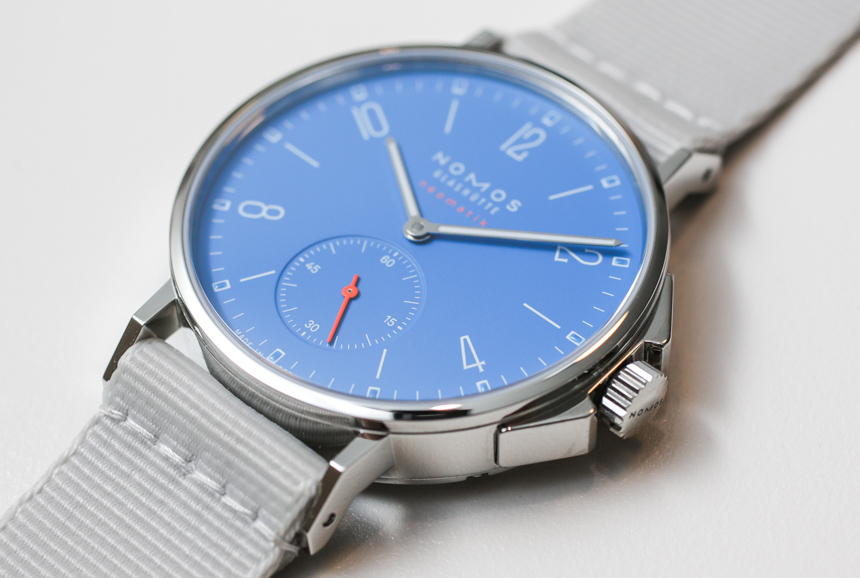 The Nomos Ahoi Neomatik has a Bauhaus dial design that Nomos watches are so famous and well-loved for. It is clean, simple, and highly legible. But since this is a watch that has been designed to go diving, it has slightly thicker hands that are filled with luminescence material. There are tiny lume markers at each hour marker too. All four models will have a bright orange seconds hand in the running seconds sub-dial. I think sometimes people find Nomos watches to look a little too inoffensive or demure, so even the most subtle design elements like these add a little bit of an edge (that word might be too much) to these minimalist and now smaller watches. 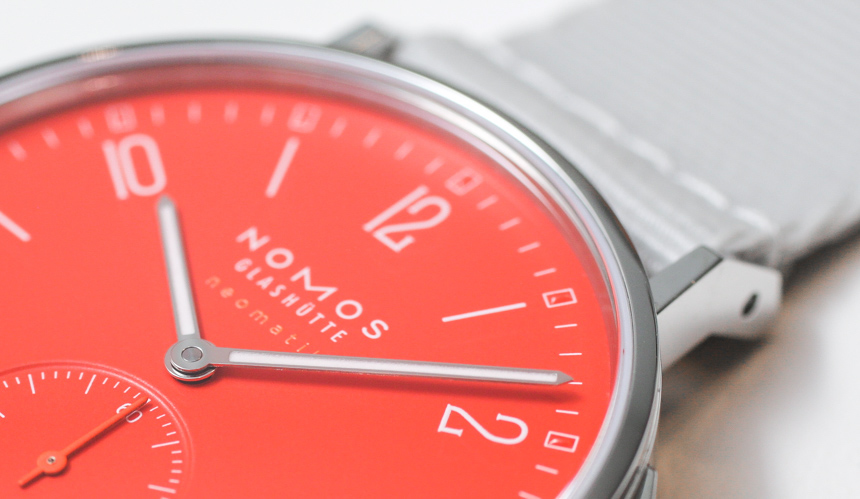 There will be four dial colors on offer here. The first two will be familiar to readers – Silver and Atlantic Blue. But there’s also two new dial colors here called “Signalblau” and “Signalrot.” The former is a very bright, almost neon, blue; and the later is a very bright red. I like these two new colors very much. Under direct light, the new Signalblau and Signalrot almost look as if they are glowing, but under dimmer light conditions, they take on a darker more somber hue. Signalblau is probably the more versatile of the two, but there’s no doubt in my mind that Signalrot is the more fun color and watch to wear. The Silver and Atlantic Blue models are nice too. The Silver is arguably the most classic, while Atlantic Blue appears dark blue under direct light and looks almost black from certain angles. 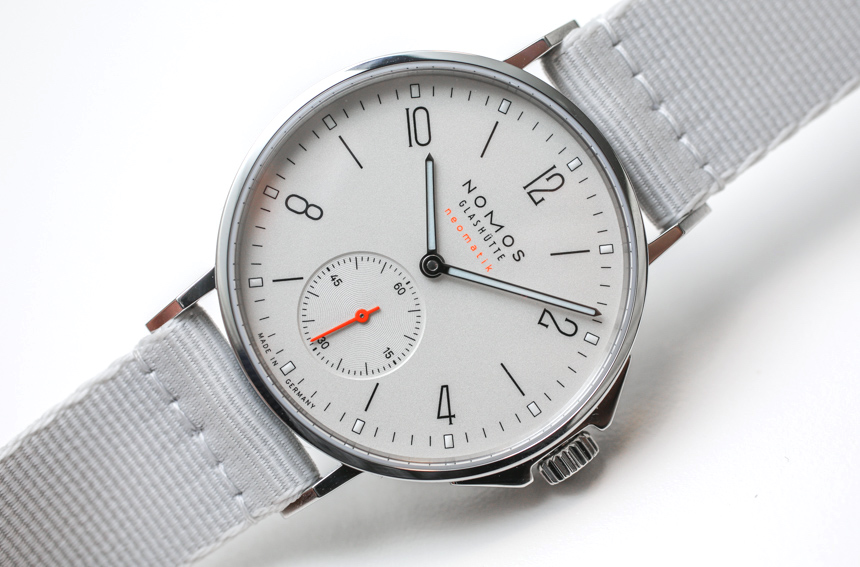 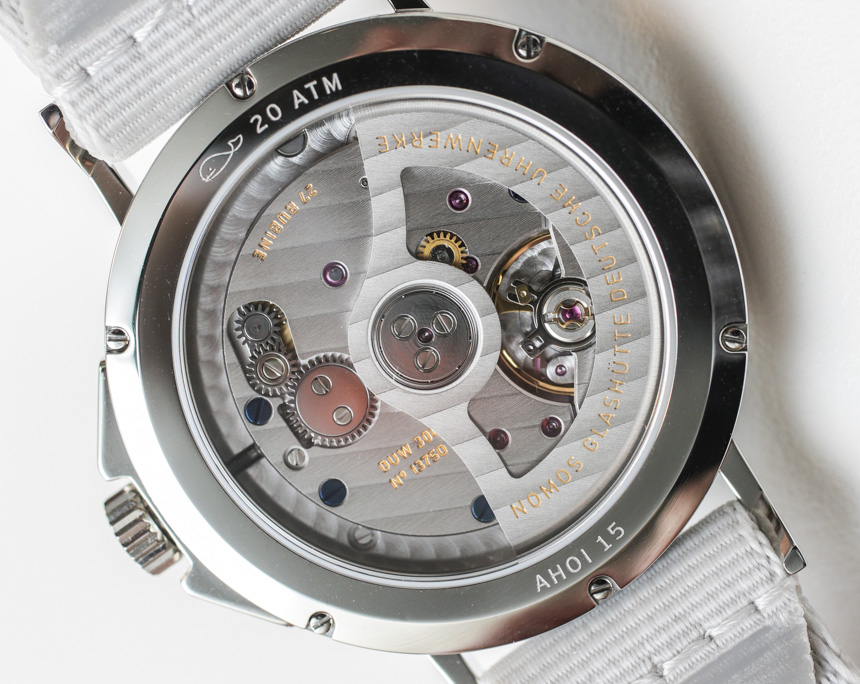 One of the highlights of these Nomos Ahoi Neomatik watches is the DUW 3001 movement within. This movement is the result of many years of research and over €15 million in development costs. It is a movement developed entirely by Nomos and uses Nomos’ own “Swing System” escapement. In addition, it is remarkably thin for an automatic movement with a full-rotor, just 3.2mm in total height. The movement has a third-quarter plate that stays faithful to Glashütte watchmaking traditions, and all rotating components are fitted into only 1mm of space between the base plate and the three-quarter plate. Despite its slim dimensions, it has a 3Hz beat rate and power reserve is 42 hours. All in all, the DUW 3001 remains a significant achievement for Nomos and an essential component when it comes to watches like these that carry a relatively high $4,000+ price point. 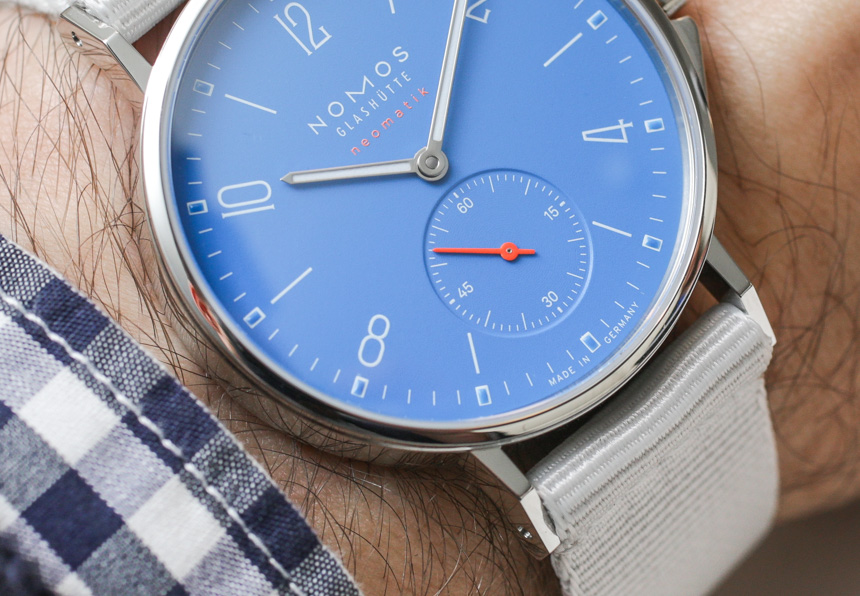 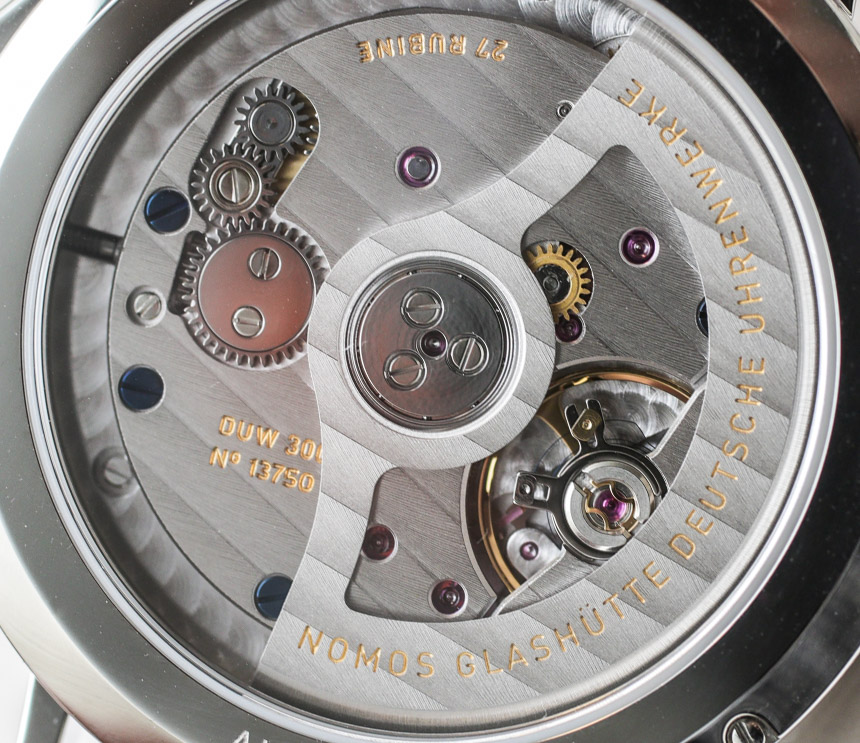 As I mentioned earlier, the DUW 3001 movement is visible through the display case back and it is handsomely finished – for a watch at its price. There’s perlage on the base plate, blued screw, machined beveled edges on the three-quarter plate and balance bridge, and also Côtes de Genève on the three-quarter plate and on the partially skeletonized rotor. And although Nomos doesn’t send its movements for COSC certification, we were told that all movements are regulated to run within COSC specifications. 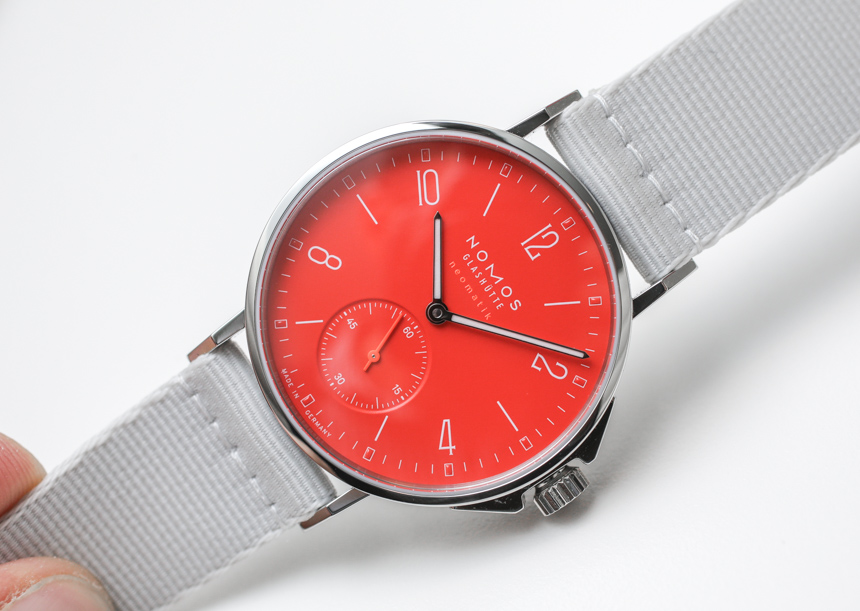 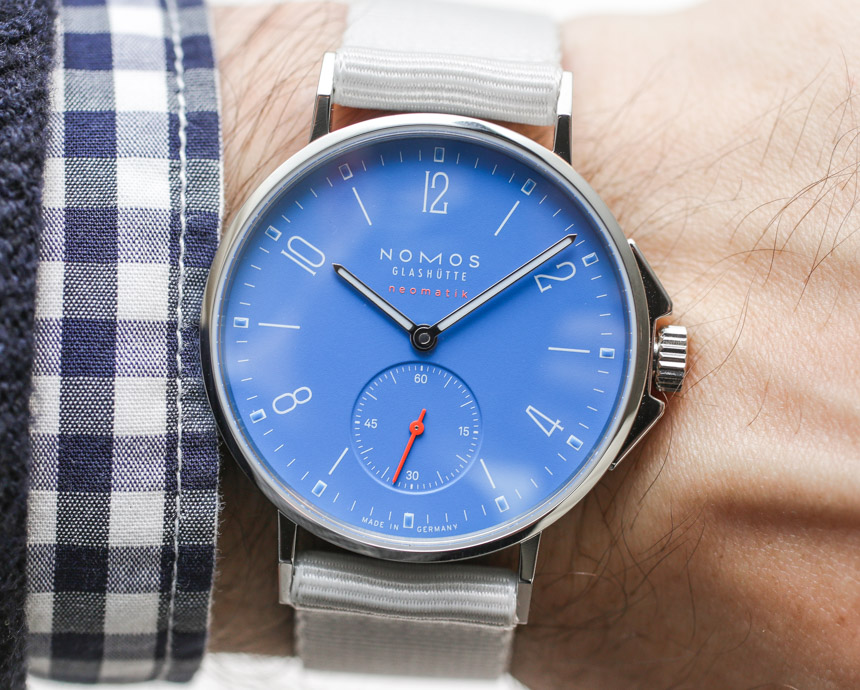 Nomos has always done things in their own way, and the new Nomos Ahoi Neomatik is further evidence of that. It is, for all intents and purposes, a dive watch, but one that is done in the immutable style of Nomos. It may have dive watch specifications, but it doesn’t sacrifice any of the wearability, elegance, and quirkiness that we have come to associate with the brand. With one look at it, there’s no doubting that it is a Nomos. The new Nomos Ahoi Neomatik is priced at $4,020 for the Silver dial, and $4,120 for the Atlantik, Signalblau, and Signalrot dials. nomos-glashuette.com