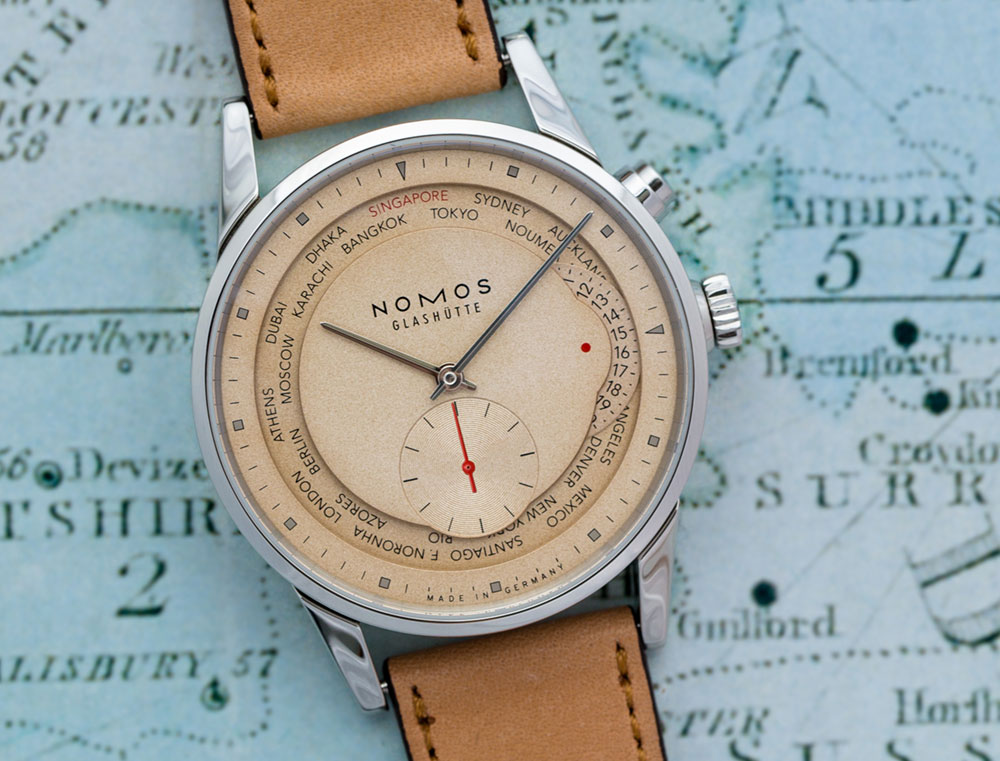 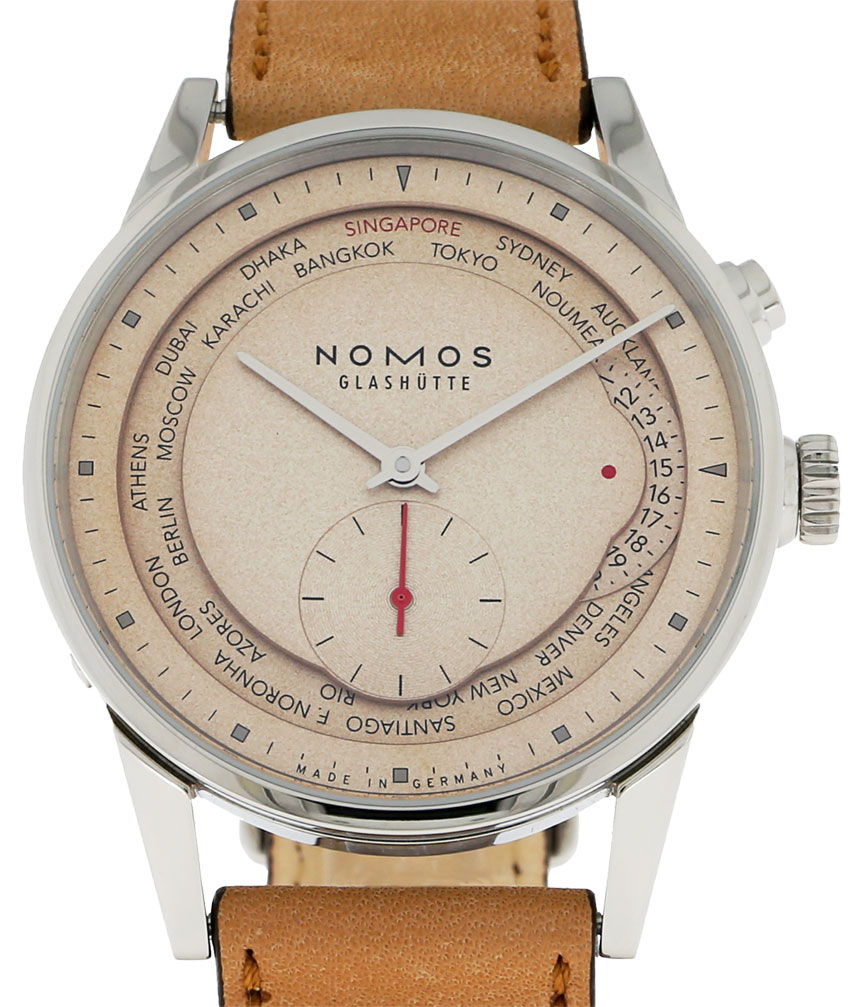 Nomos might be a small watch company, but it commands a legion of fans thanks to its eye for good design and rather sensible pricing. The company’s most complicated watch is the Zürich Weltzeit, a traveler’s favorite because of its thoughtful dual timezone complication. This model debuted in 2011 and came with a silvery white dial. It was updated in 2014 with a blue dial and an in-house escapement. Now, there’s a new limited edition version, called the Nomos Red Dot, specially created to celebrate the anniversary of Nomos’ official presence here in Singapore. 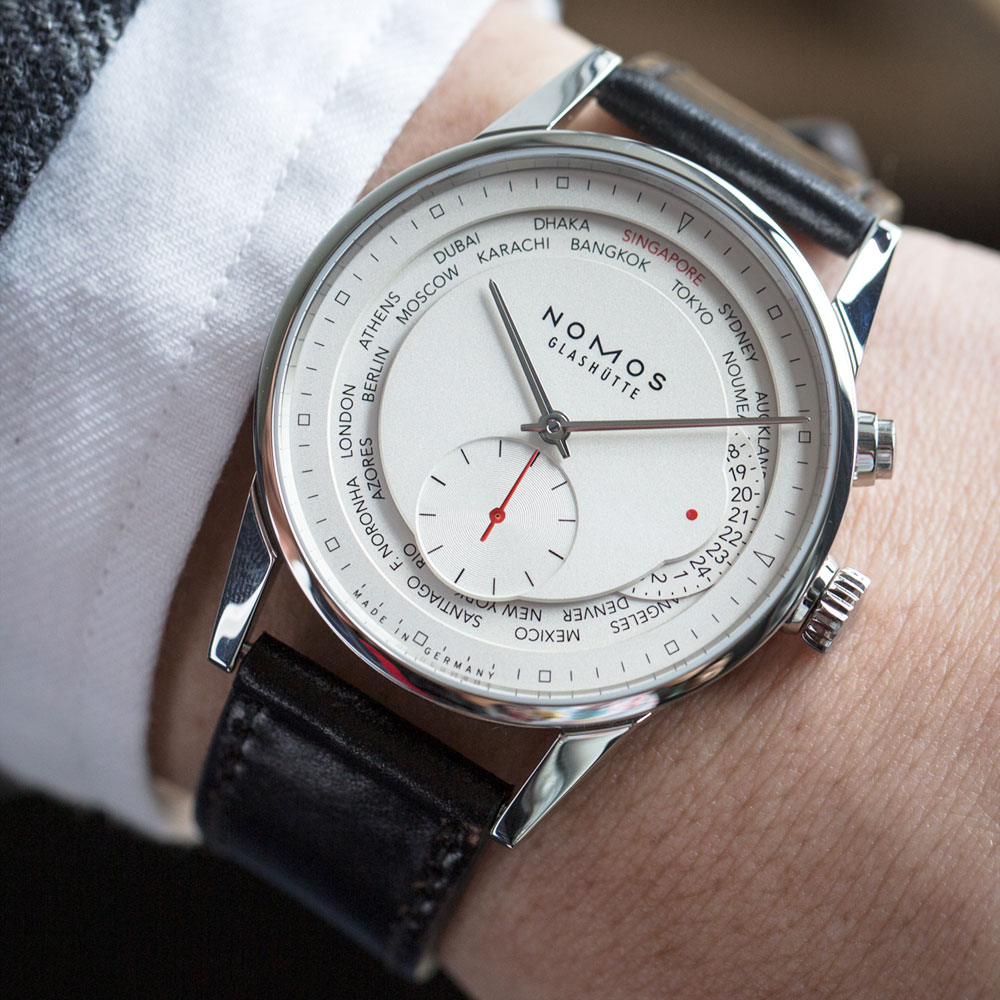 This occasion is a bit of a big deal, because while Nomos is widely known in watch-crazed Singapore, watch lovers on this tiny island could previously only get their hands the watches through Nomos’ online shop. Not that there is anything wrong with that, but there is nothing quite like the feeling of going to the shops and seeing the actual watch in person before committing to a purchase. Press photos and hands-on photos can only tell you so much, and nothing beats seeing the actual watch in the flesh. Fortunately, The Hour Glass, one of Singapore’s largest watch retailers, decided to add Nomos to its stable of brands in 2016. 2017, therefore, marks the anniversary of this relationship, which is as good a reason as any for a special edition. 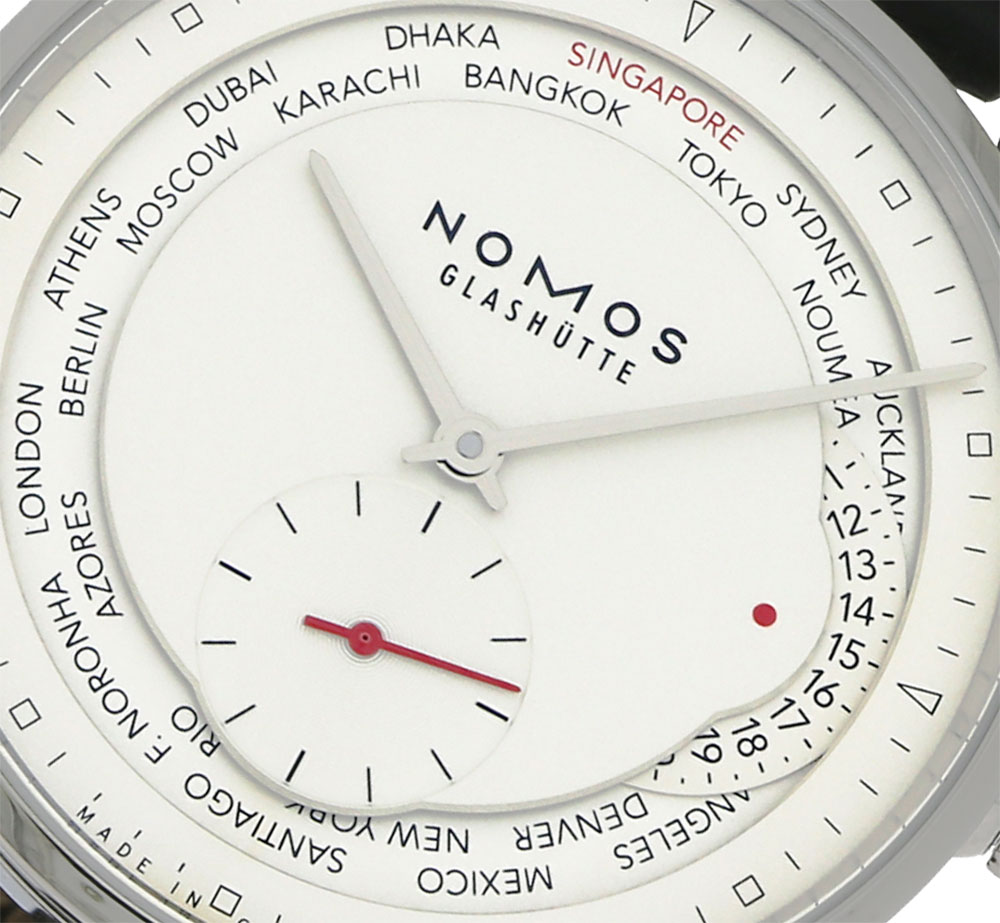 The watch is largely unchanged, the Nomos Red Dot comes in the same 39.9mm-wide stainless steel case with straight lugs like the original Nomos Zürich Weltzeit and Zürich Weltzeit Nachtblau. Watch thickness is the same at 10.85mm, which makes it rather slim, and water-resistance is still 30m. 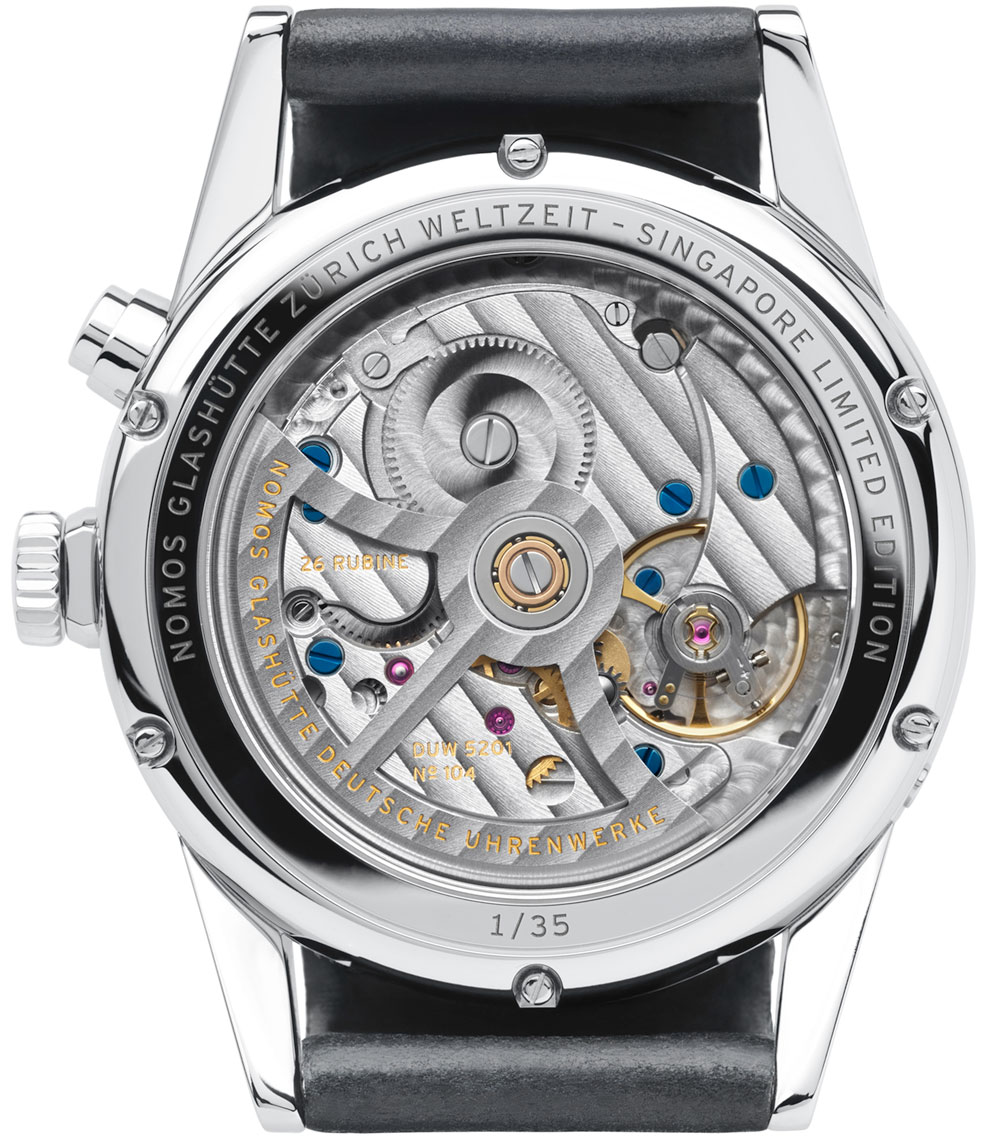 Like the original Nomos Zürich Weltzeit and Zürich Weltzeit Nachtblau, this new Nomos Red Dot Singapore is driven by the in-house Nomos caliber 5201, which features the company’s own Swing System escapement. The movement, which is visible through a display sapphire caseback, is rhodium-plated, features Glashütte ribbing on the bridges and main plates, and heat-blued screws. More importantly, it features a dual timezone complication that is easy to use. 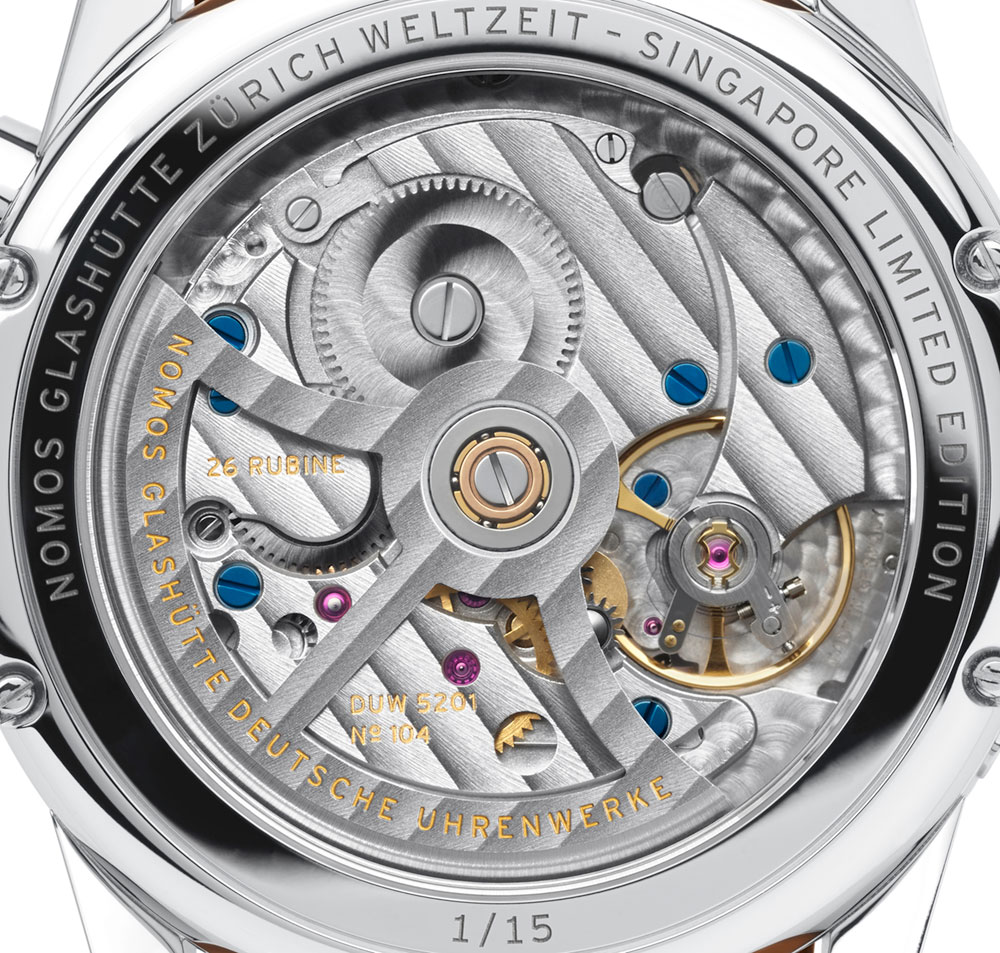 The dual timezone complication is very thoughtfully conceived. If you are in, say, in Los Angeles, you would use the pusher at 2 o’clock and move Los Angeles on the city disk such that it aligns with the triangle at 12 o’clock. You would then set the time to LA time, which is, let’s say, 2pm. If you were traveling across the country to New York, you would simply press the pusher at 2 o’clock, make sure New York aligns at 12 o’clock, and the hour hand will automatically jump and advance 3 hours. Very useful for frequent travelers. 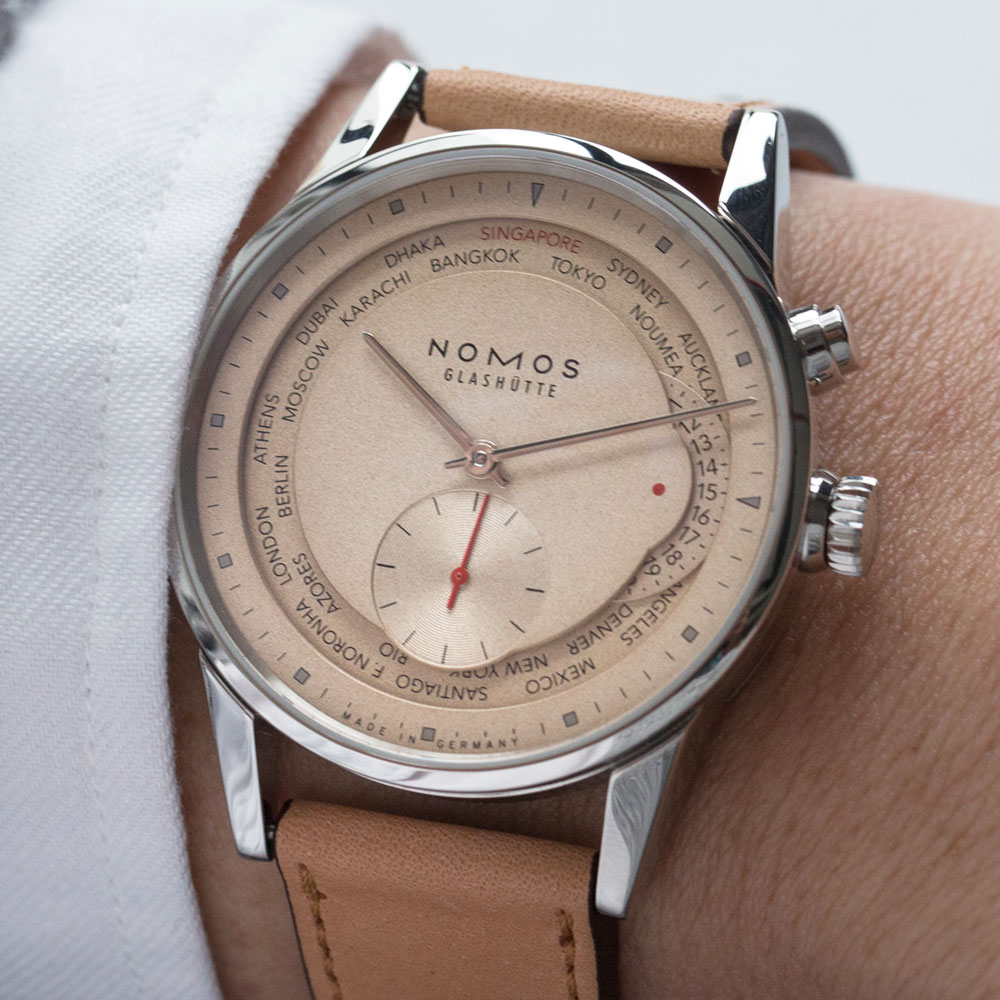 The big changes are on the dial. The Nomos Red Dot watch will come in two versions, one with a classic white dial and another in a unique salmon dial. Apart from the different dial color, the UTC +8 timezone will be represented by Singapore instead of Hong Kong, and “Singapore” is written in red. 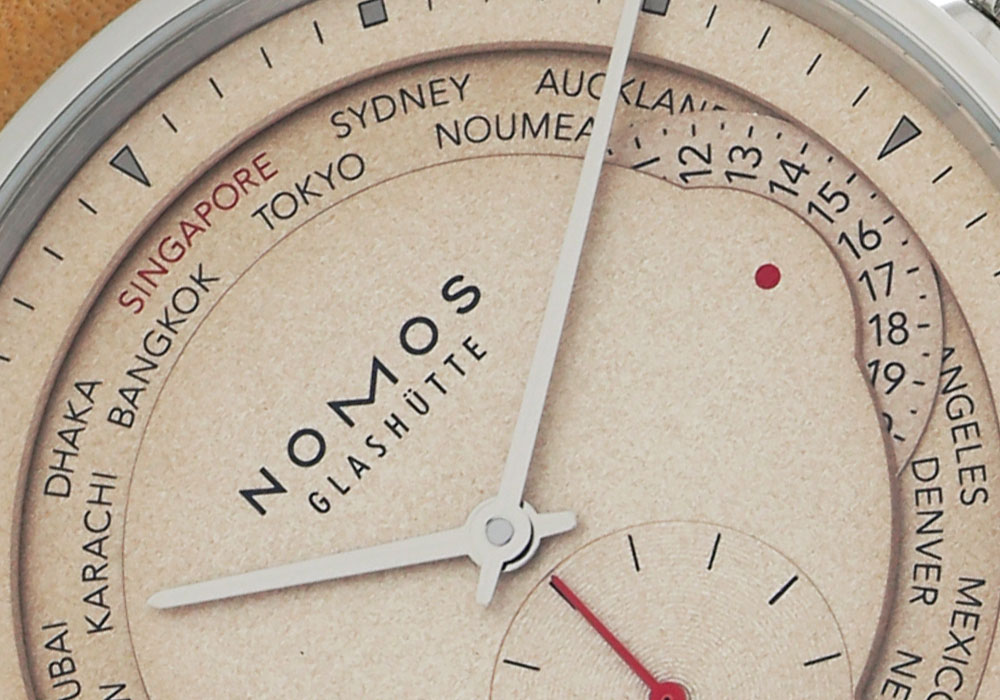 Additionally, the home time indicator at 3 o’clock will feature a single tiny red dot in place of a home logo as seen on the original Zürich Weltzeit and Zürich Weltzeit Nachtblau. This is a tribute to one of Singapore’s nicknames, “Little Red Dot,” a reference to how Singapore is depicted on many world maps as a small red dot.

The new Nomos Red Dot looks like a very nice take on what is already a very popular and clever travel watch, and I think watch lovers and collectors will jump on this piece very happily. However, do note that there will only be 50 pieces in total – 35 in a silver dial and a mere 15 with the salmon dial. The Nomos Red Dot is priced at S$8,560 (approximately $6,390 USD at time of writing) and will be sold only at selected Hour Glass and Watches of Switzerland stores in Singapore. nomos-glashuette.com