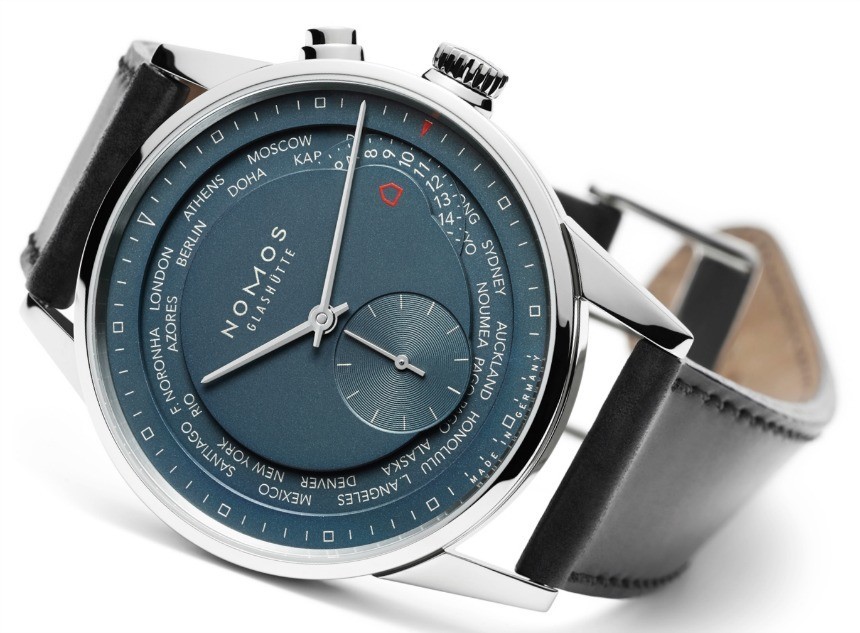 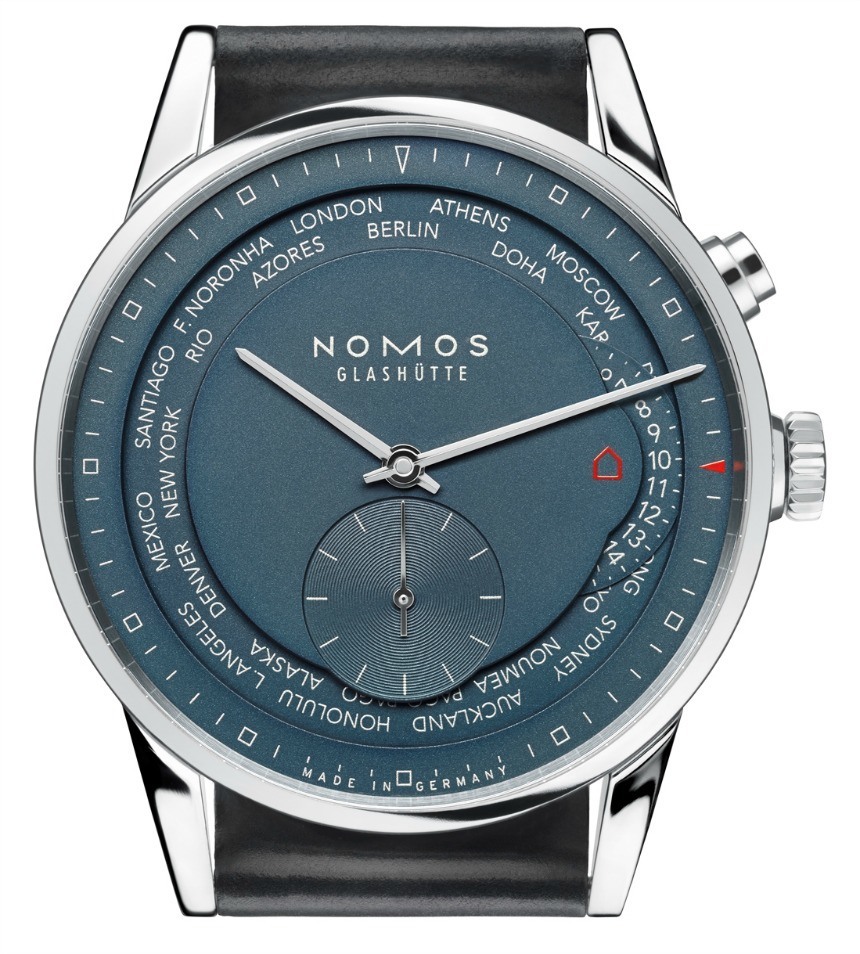 Achtung, German watchmaking enthusiasts! Since it was introduced in 2010, the Zurich Worldtimer – or Zürich Weltzeit, as it is known to our Deutsch-sprechen friends – has become one of the most compelling models released by the innovative German manufacture Nomos Glashütte.

Now, the Nomos Worldtimer is being released later this fall in a new edition called the Nomos Zurich Worldtimer True Blue (or Zürich Weltzeit nachtblau). This proves an exciting development for two major reasons. For one, it gives this model a blue dial option – but even more significantly, updates the movement with new technology to make it even more in-house and original. Thus, in addition to the new dial color the movement in this new model is different than the original Nomos Zurich Worldtimer watch.

The original version of the Nomos Worldtimer provided a stunning expansion of the brand’s original design mandate. While the majority of the Nomos models reflect a minimal, Bauhaus-influenced aesthetic, the Nomos Worldtimer displayed a more complex, varied, somewhat more whimsical look that fit its complication as a world timer (showing the local time in two places simultaneously, from a choice of 24 global time zones). The original version had real presence on the wrist, with its play of various visual planes on the dial’s white expanse and a healthy 40mm case diameter (definitely on the bigger side measured by typical Nomos watch sizes). 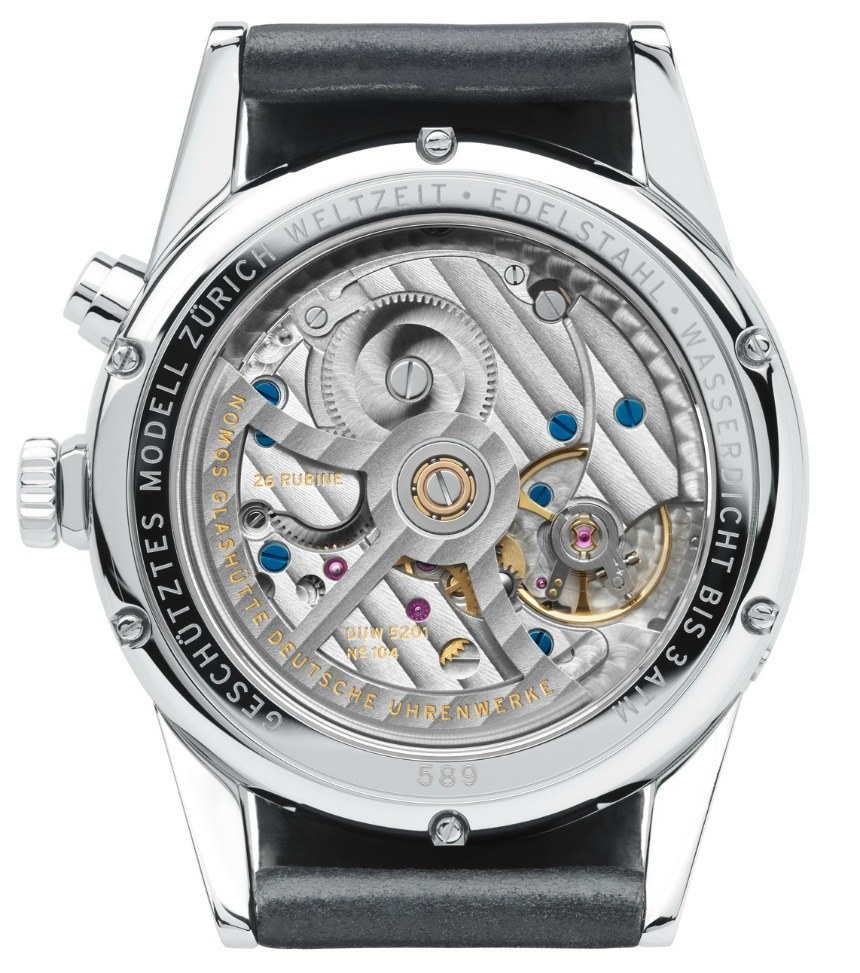 While we have yet to see the Nomos Zurich Worldtimer Blue watch in person, it looks fantastic in photos provided by Nomos. As well, the transformation of the Ahoi model with a rich blue dial (via the Atlantik model Nomos released earlier this year, after previewing at Basel) makes us think this will be something special. The spike of red indicating the base home time on the new Nomos Zurich Worldtimer Blue adds a bit of sporty visual interest as well.

However, what sets apart the Nomos Zurich Worldtimer Blue from its previous incarnation is that the new model will now feature the in-house made caliber DUW 5201 – the company’s first automatic movement to feature the NOMOS swing system in-house made escapement. The original Nomos Worldtimer’s movement already had a most unique take on showing two time zones: pushing the watch’s “home button” caused an utterly smooth, graceful adjustment to the desired city’s current time. This complication proved mechanically sophisticated, novel, and quite simply a lot of fun to operate; once you got used to the system, readability was a breeze.

While we can’t imagine the mechanism’s update will change that experience significantly for the user, incorporating the DUW 5201 here still remains an important refinement (and makes Nomos one of the elite few independent companies able to make their own escapement technology). The swing system – which has already appeared in some previous Nomos watches and movements – is distinct: as opposed to sourcing elements from a Swiss conglomerate like ETA, Nomos developed its own in-house anchor, anchor-wheel and balance-spring (which is tempered blue, setting it apart from the brand’s other non-swing system engines).

Yup, there’s no Nivarox parts in this baby. The resulting movement was built up around the new parts, making this not just a revision of a previous caliber found in a variety of watches – as many so-called “in-house” movements actually are – but also an alternative to the more expected Swiss-style lever escapement. Advance images of the Nomos Zurich Worldtimer Blue also suggest that the perlage, striping, decoration, and jewelling of the movement remain as superlative (or better) than the original, down to its signature skeletonized peekaboo rotor. Then again, exquisite finish has always been a Nomos standard, so no surprise there.