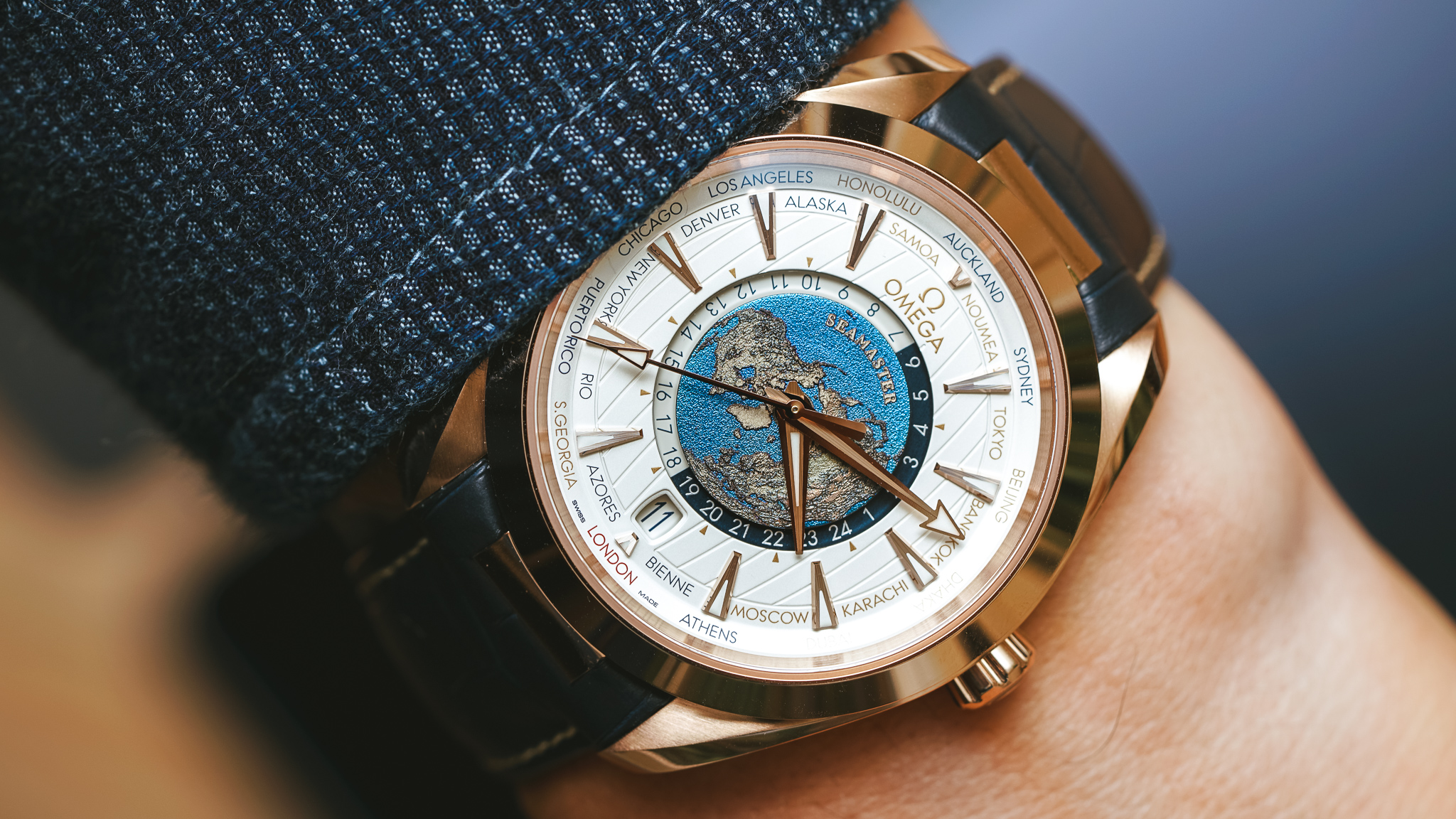 Did they do it? Did they do the Worldtimer in steel?” I had to know. It was only the second day at Baselworld 2019, and already Omega was showing its latest novelties in secret, but to retailers only — with no media present and certainly no photographs allowed. I’d spent the last two show cycles impatiently waiting for 2015’s platinum halo edition to make its way into the regular line (and eventually onto my wrist) — and this had to be the year.

“Yes. They did,” answered my inside man.

“It’s gorgeous. It’s seriously gorgeous,” he added breathlessly, as though adjectives failed him in that particular moment. What I didn’t know is that Omega had not just shown him the blue-dialed Worldtimer in steel (whose announcement we covered here), but also an equally gorgeous Sedna gold variant with a stark white dial that complements the laser-ablated map relief in the center perfectly. Wait, laser-what? 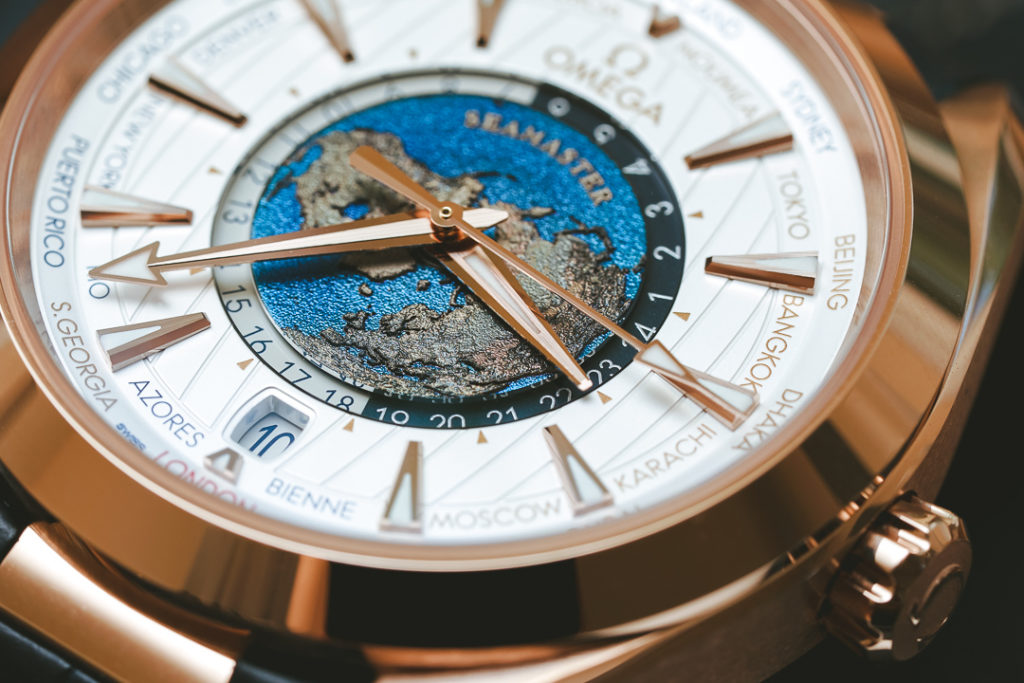 Laser-ablated. It’s how Omega has rendered the gnomonic projection of the earth at the center of the dial in such staggering detail. Essentially, the dial center’s grade 5 titanium surface is zapped with a laser at varying levels of intensity, creating chemical reactions that yield an equal variety of intense texture and colors, meant to evoke the planet’s seas and landmasses, encircled by a glass 24-hour ring. But what really surprised me about seeing this dial in the flesh is just how much depth and dimensionality it hides — not unlike the textured rotating globe that you might remember from geography class. The visually striking end result uses super-modern manufacturing methods to achieve the time-honored tradition of putting a map in the center of a worldtimer’s dial. Last time Omega got it done by hand in two-dimensional enamel, and this time it was 3-D painted with lasers. Either way, it’s enough to get a cartographer hot under the collar — and I mean that in the best possible way. 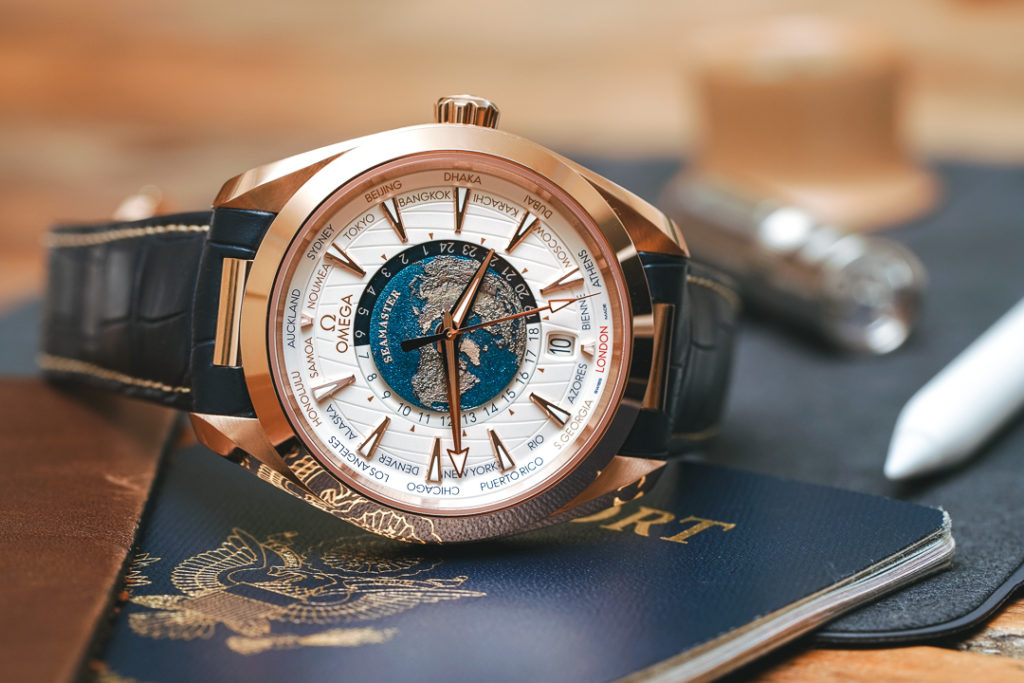 The rest of the eggshell-white dial is rendered in somewhat traditional worldtimer manner: You have the sharply beveled applied hour markers, a deep, tonneau-shaped date aperture at 6 o’clock, and subtle longitudinal striping, which looks a bit like the vertical “teak-deck” style dials from the 8500-series generation of Aqua Terra watches. Around the outer perimeter of the dial, we have 24 of the world’s time zones, as defined by those with a single-hour offset. Yes, there are actually 37 time zones in the world, if you want to get really technical, with a few involving a 30- or 45-minute offset, but I appreciate the fact that Omega keeps things relatively traditional here. Zones with Daylight Savings Time are rendered in light blue, and those without DST are in tonal gold — another neat touch. The hour hand independently adjusts in hourly increments without stopping the movement, and if you land in those less common offsets, just pop the crown out to the third position and make your adjustment from there. 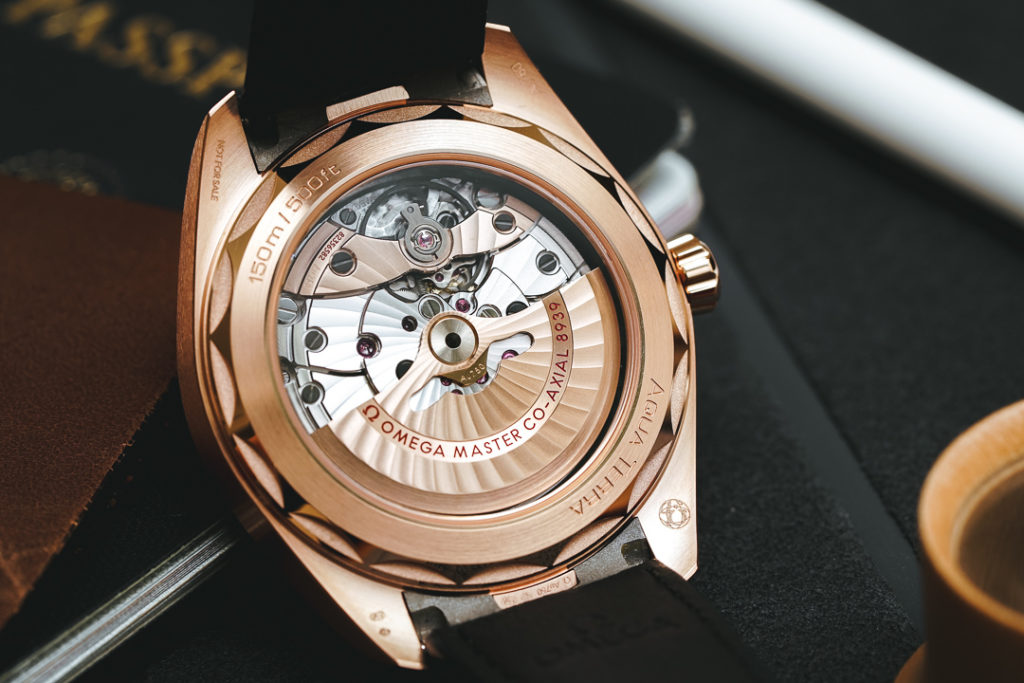 Functionality-wise, Omega’s new Worldtimer runs a bit like a traditional GMT watch, albeit one whose information is simply presented in a different way. Rather than a 24-hour hand running around the center of the dial, as Omega did with its Calibre 8605-powered Aqua Terra GMT of year’s past, we now have a rotating 24-hour disc, which simply reads the local time in each of the world’s primary time zones. I particularly like how there are 24 triangular markers that read outwards from the disc, enabling the wearer to easily trace their gaze from the time at the center to the respective time zone at the perimeter. The Worldtimer is powered by Omega’s Calibre 8938 (note that the solid-gold watches like this one get Calibre 8939, which denotes the gold rotor and gold balance bridge embellishments), an amagnetic Master Chronometer movement with 60 hours of power reserve. 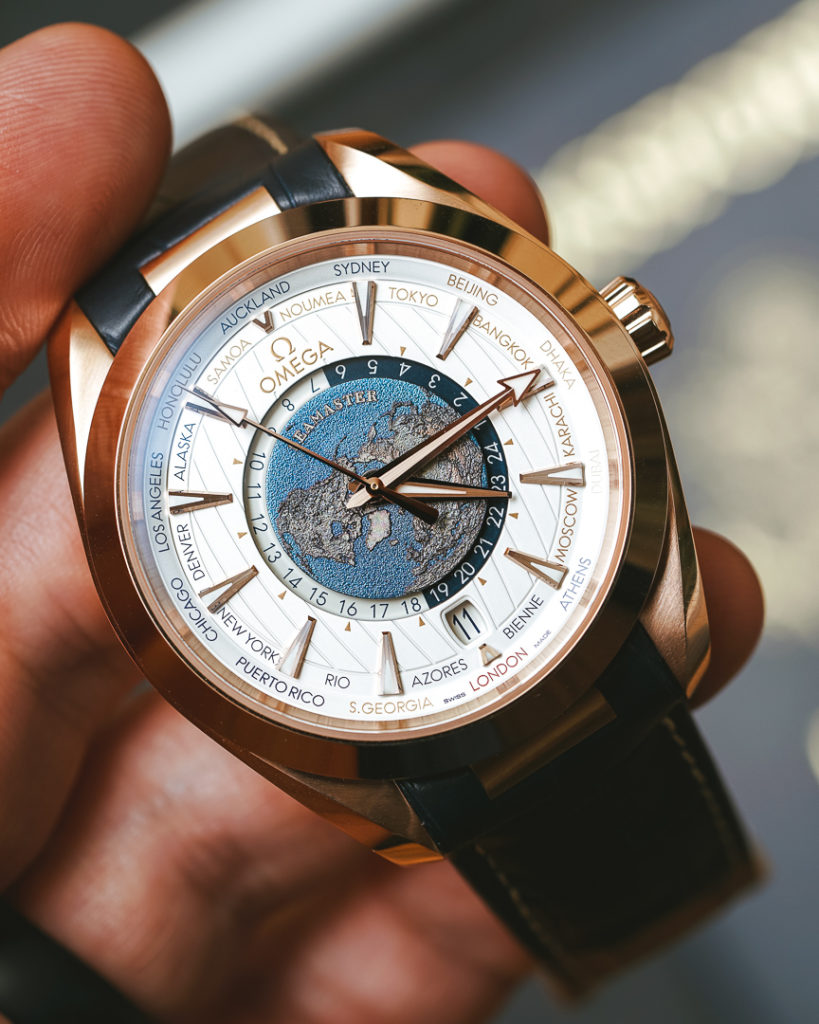 Speaking of which, I had a love/hate relationship with the Aqua Terra GMT of year’s past. On one hand, it was gorgeous, super legible, highly water-resistant, and was fitted with a globetrotting movement that dunked on any of its contemporaries, making it a serious contender for true GMT supremacy. In essence, it was nearly the perfect “one watch” for someone like me. “Nearly” being the operative word though, because it wore thick and flat on my 6.5” wrist – cruelly broad for its 43mm proportions, no matter which straps I fitted it with. Ever since having conceded defeat, I’ve never been able to fully reconcile just how troubling that watch was until slipping on the new Worldtimer, which is also 43mm and still water-resistant to 150 meters, but built around Omega’s third-generation Aqua Terra case (fourth-generation dial, if we’re keeping score here), whereupon a closer inspection reveals its biggest changes are not just cosmetic, like the shape of the crown or the re-orienting of the dial’s teak deck, but in the size, shape, and angle of the lugs. 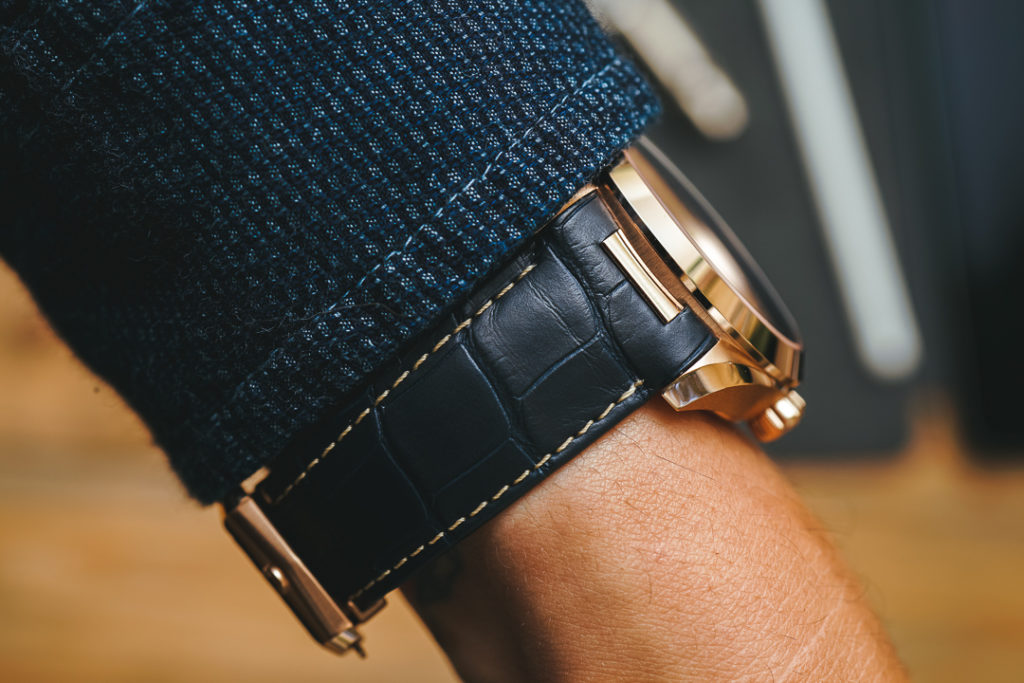 At 43mm by 15.5mm, the new Worldtimer is hardly a small watch, but Omega’s edits to this larger case included shortening and sharpening its twisted lugs, which now taper in a steeper downward angle, reducing the overall lug-to-lug measurement to 50mm and enabling the watch to sit closer to the wrist. Even in solid gold, and weighing just over 150 grams, it still wears comfortably, thanks also to the highly supportive leather strap which pushes directly downward from the lugs, rather than out and down, as rendered in the previous generation. Everything about the redesign lends further credence to the fact that the raw case size of a watch and even its weight are secondary to how well the lugs are designed — and Omega nailed it here. 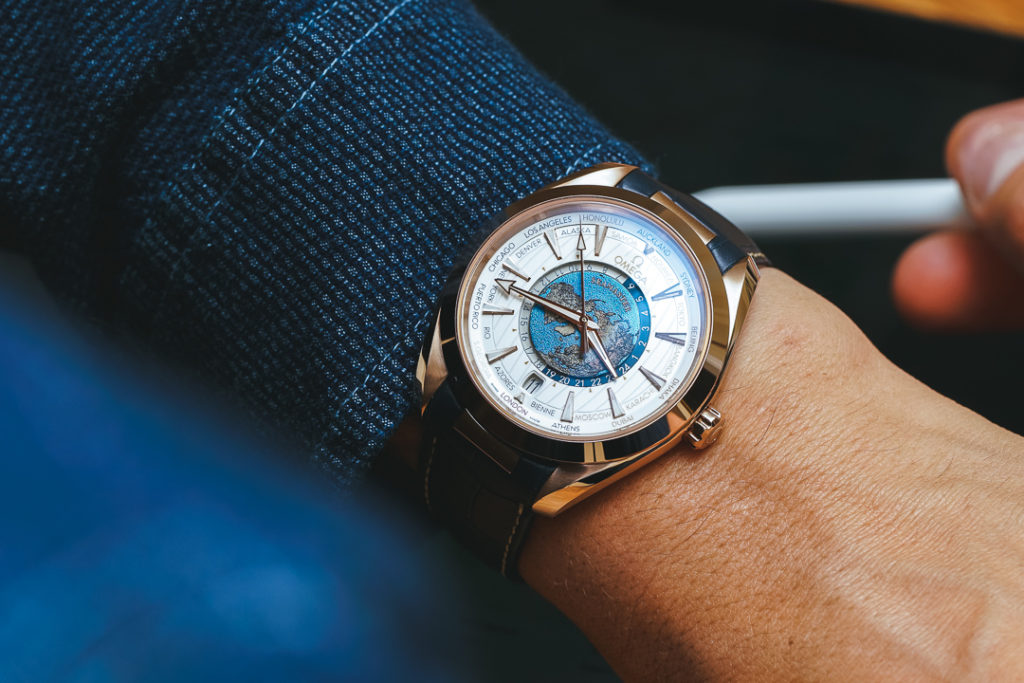 I’ve said it before, and I’ll say it again, there’s a marked dearth of good “worldtime” traveler watches out there. And when I say “good,” I’m referring to those with easy hour hand adjustment, some means of simultaneous observation of “home” or “globe time,” and enough water resistance to not give the wearer pause when confronted with a hotel pool or oceanside getaway on the other side of the world. Getting all that data into a legible dial and then housing it all in a sporty but wearable case has, apparently, long proven to be a challenge for most manufacturers — particularly in the under-$10,000 segment, but I’m starting to think that Omega is getting us the closest with its Aqua Terra Worldtimer. 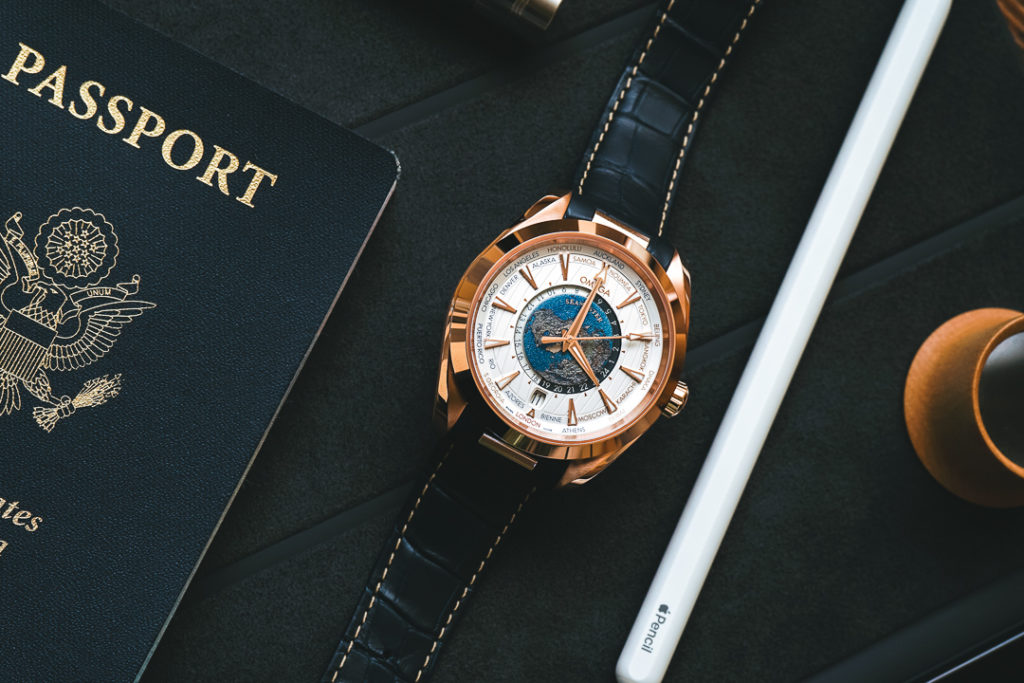 The Omega Seamaster Aqua Terra Worldtimer in both Sedna gold and stainless steel is expected land in Omega retailers in December. For more information, head over to omegawatches.com. 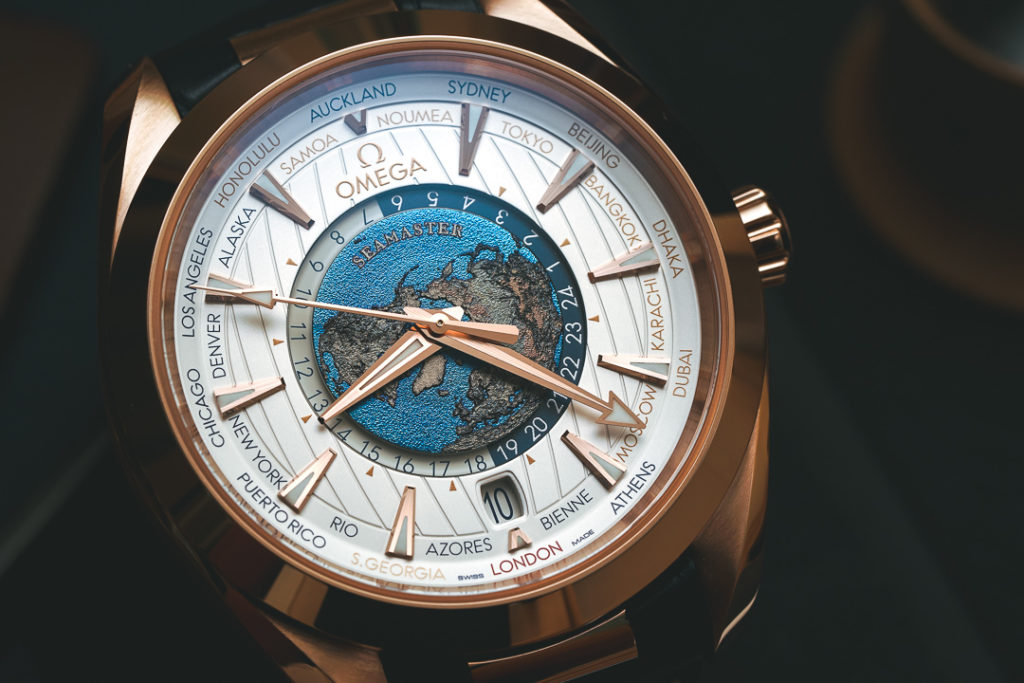