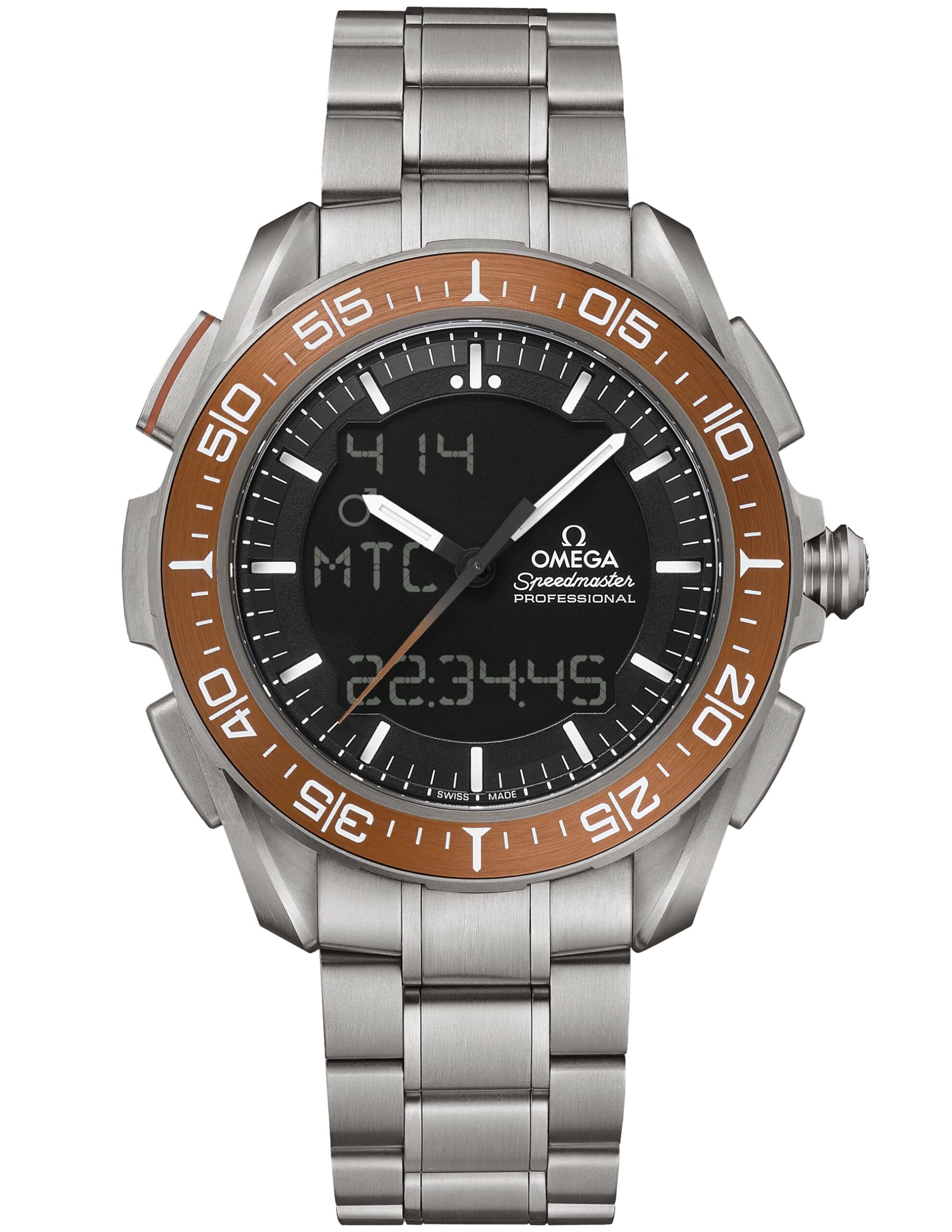 When it comes to watches with space exploration heritage, there is the Omega Speedmaster, and then there is everything else. First launched in 1957 and designed for the world of automotive racing, the highly versatile design of the classic Speedmaster made it an incredibly practical timepiece, but the version that was flight-qualified by NASA and used during the early days of human space exploration was never actually built for that specific task. At its core, the classic Speedmaster Moonwatch is a racing chronograph, but that has not stopped Omega from producing other versions of the Speedmaster over the years that have been designed from the ground up for use in environments outside of this planet. While the classic Moonwatch is a manually-wound chronograph, the X-33 is a thoroughly modern version of the Speedmaster that features a hybrid analog/digital display and is packed with a number of digital features that are specifically designed for use in outer space. The classic mechanical Moonwatch remains the original flight qualified icon, but the Speedmaster X-33 is the version of watch that many astronauts actually use, and to cater to a new generation of astronauts and the next frontier that humans plan to conquer, Omega has created a new version of its most technologically advanced chronograph that is specifically intended for use on Mars. Today, at an exclusive Speedy Tuesday event held at the European Space Agency Visitor Center, the famous Swiss watch manufacturer unveiled the Omega Speedmaster X-33 Marstimer ref. 318.90.45.79.01.003. 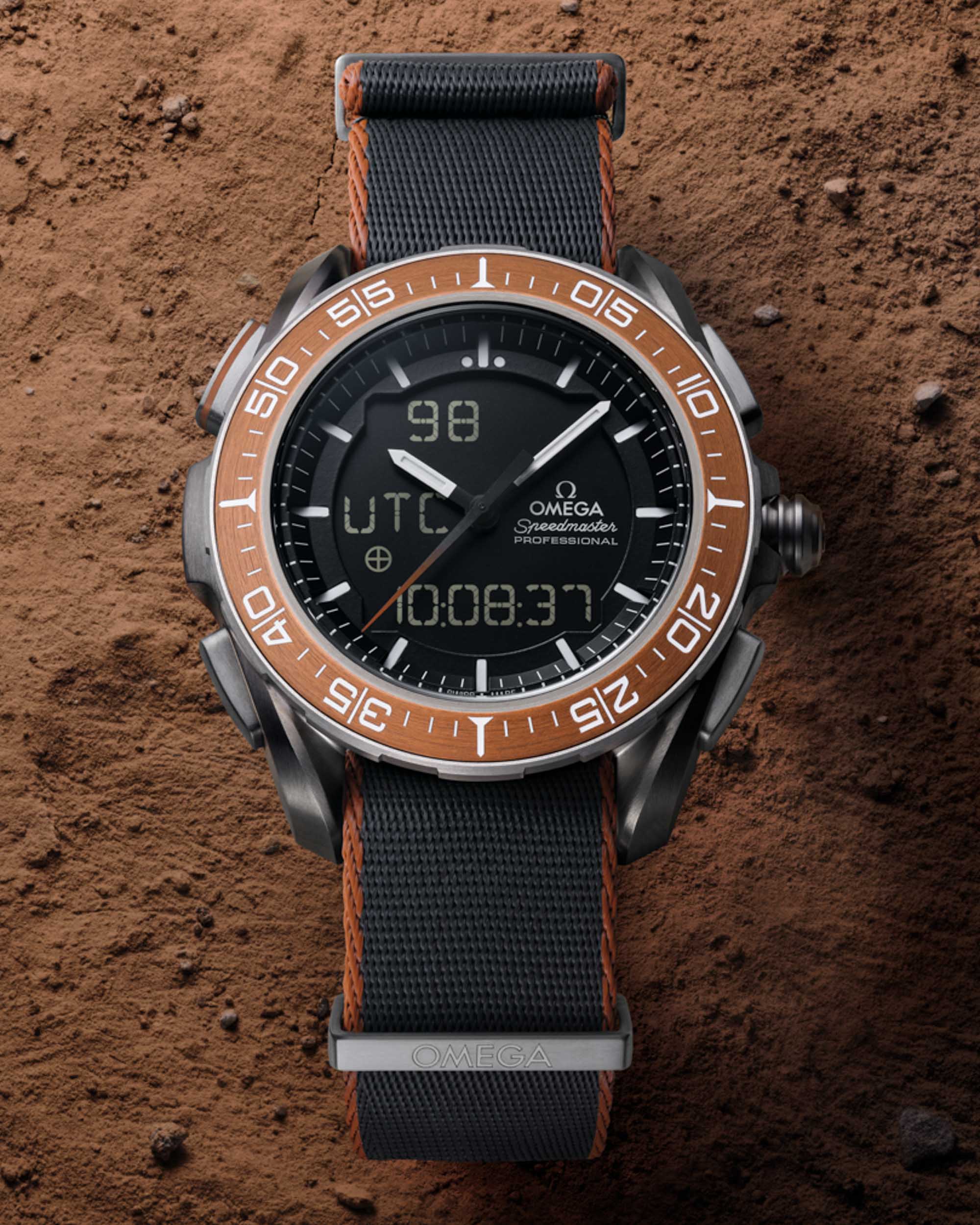 The new watch is a result of a request made by the European Space Agency (ESA) for a timepiece with specific functions for keeping track of time on Mars. Compared to Earth, a day on Mars is 2.7% longer, meaning that a normal wristwatch will not be able to properly track the Red Planet’s unique daily cycle. Created in partnership with the European Space Agency (who is also the party that tested the watch and qualified it for space flight), the new Omega Speedmaster X-33 Marstimer is technically the fourth generation of the X-33, and it is largely based upon the design of the existing X-33 Skywalker but packed with additional digital functions to make it specifically intended for use on Mars. The primary reason these Mars-specific features weren’t just developed as software and built into an existing smartwatch or connected device is due to battery life. Unlike a smartwatch that will need to be charged every few days at the most, the Omega Speedmaster X-33 Marstimer will run for at least two years before it needs to have its battery replaced. Additionally, just like the X-33 Skywalker that was first launched in 2014, the new X-33 Marstimer is also tested and flight-qualified by the ESA, and it was subjected to the same extensive texts to guarantee that it can survive the extreme acceleration, temperatures, vibrations, and radiation that exists in outer space. 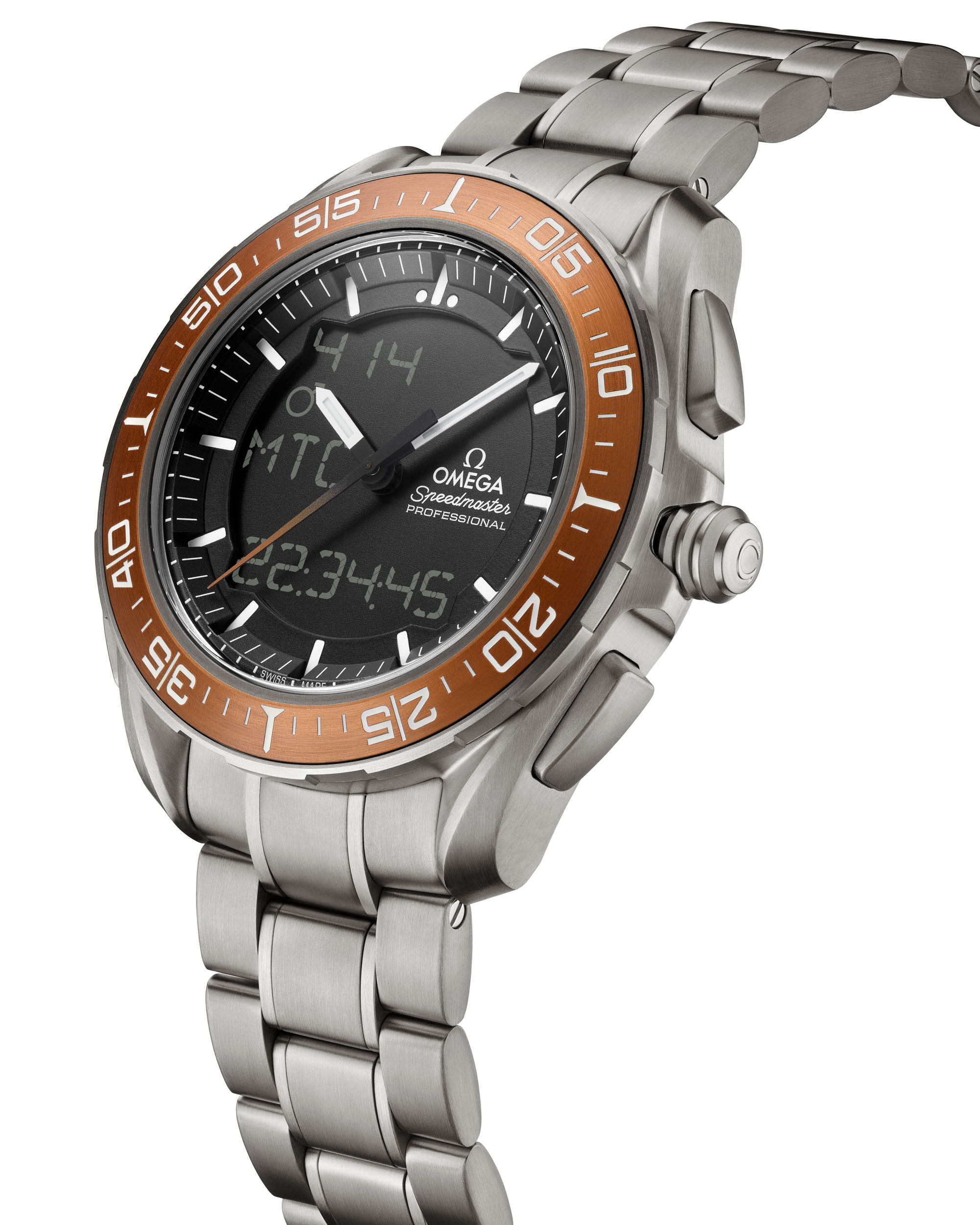 At a glance, the new Omega Marstimer will be instantly familiar to anyone who has previous experience with the current Speedmaster X-33 range. The case is crafted from brushed grade 2 titanium and measures 45mm in diameter by 14.9mm-thick — which sounds absolutely massive, yet it manages its size surprisingly well and is quite wearable on the wrist. Even the classic Speedmaster Moonwatch has a 42mm case diameter, and the fact that the X-33’s case slightly extends around its crown and the four pushers that are used to operate its digital functions give it on-paper dimensions that are quite a bit larger than the on-wrist presence they actually provide. Additionally, part of the thickness is due to a dual-level caseback design, which features an additional layer that serves as a resonator to help amplify the watch’s extra-loud alarm. The outside of the caseback features Omega’s famous seahorse emblem, along with an engraving denoting that the model is tested and qualified by the ESA. Where the Marstimer begins to differ from the existing X-33 Skywalker is when it comes to its bezel. Rather than having an insert made from black ceramic, the new Omega Speedmaster X-33 Marstimer features a bezel insert made from oxalic anodized aluminum in a red hematite color that is intended to be reminiscent of the red dust on Mars. The same red hematite color is echoed on an accenting ring that appears on the pusher protruding from the 10 o’clock position, but other than these small dashes of reddish brown, the overall external case of the watch is near identical to the existing X-33 Skywalker, and it, therefore, offers the same 20mm lug width, along with an identical 30 meters of water resistance. 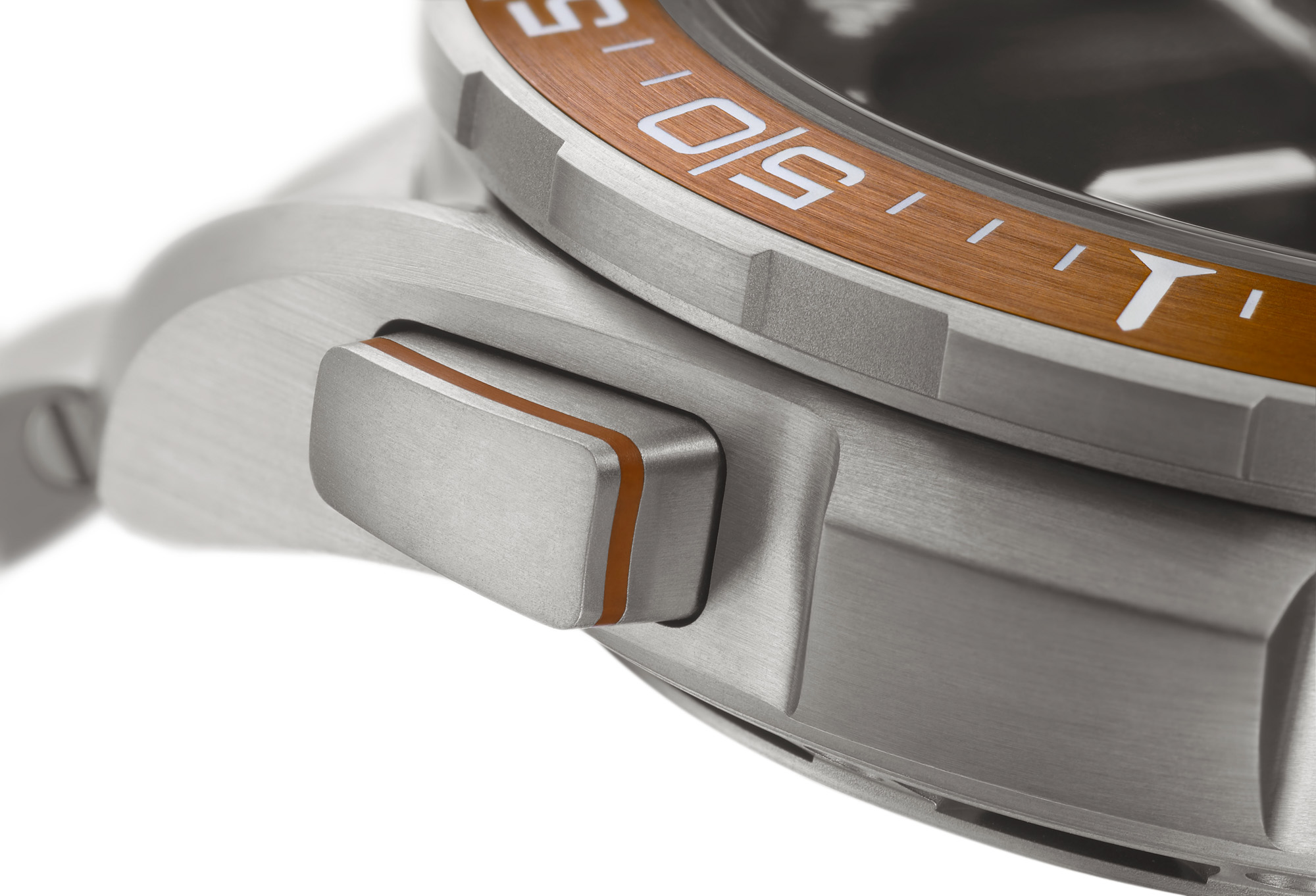 The “dial” itself isn’t so much a dial as it is a digital screen, and it is also identical to the one found on the standard X-33 Skywalker model, with the one exception being the color of the seconds hand. Rather than being bright red with a black base, the seconds hand fitted to the Omega Speedmaster X-33 Marstimer features a gradient effect that fades from black at the base to the model’s signature red hematite color at its tip. Beyond the color of the seconds hand, the dial itself is the exact same, and it features a large digital screen that serves as the background for the trio of centrally-mounted hands, along with luminous hour markers and the obligatory “Omega Speedmaster Professional” branding appearing at the 3 o’clock location. The Omega X-33 range is all about functionality, and the “dial” is not about showcasing intricate designs or finishing, but rather offering access to a wide variety of practical information. As a digital screen, Omega’s current design does this quite well, and other than engineering a new type of screen, there would be no functional reason to change the dial fitted to the X-33 Marstimer. Plus, keeping the same layout and display format would likely keep things simple for any astronauts who were already familiar with using Omega’s X-33 Skywalker watch and needed to quickly transition over to the X-33 Marstimer for a specific mission. 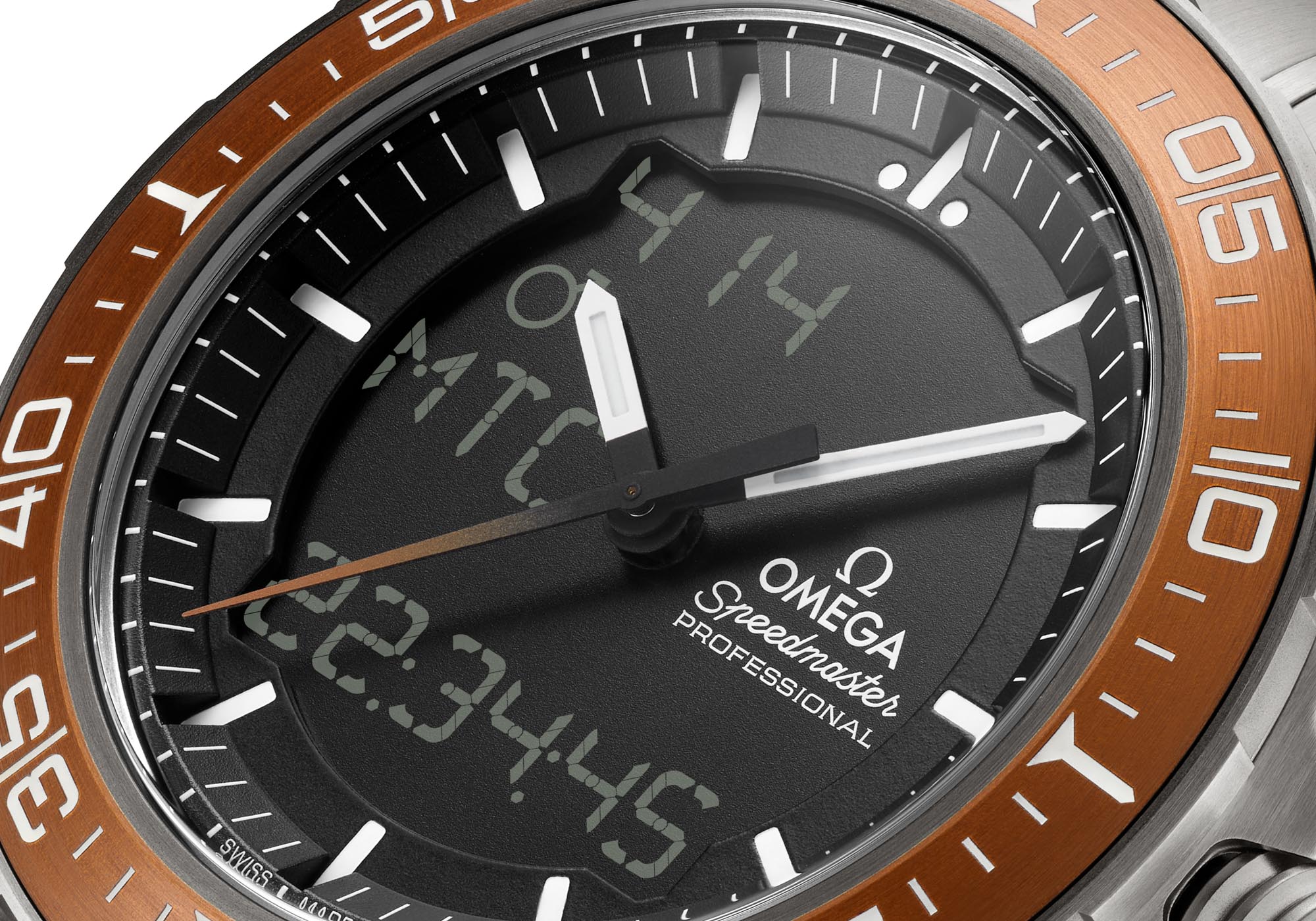 Other than the pops of red hematite color, the biggest changes to accompany the new Omega Speedmaster X-33 Marstimer are in regards to the additional functionality of its high-accuracy quartz movement. Powered by the Omega Caliber 5622, the battery-powered, thermo-compensated quartz movement offers all of the same advanced functionality as the movement inside the X-33 Skywalker (Cal. 5619), such as the ability to track MET (Mission Elapsed Time) and PET (Phase Elapsed Time), along with multiple alarms, and a perpetual calendar. However, it also can track times and time zones across both Earth and Mars, and it even features an innovative solar compass to find true north, which is especially important because Mars does not have a magnetic field like Earth to provide orientation. The solar compass is one of the features that creates a relatively heavy draw on the battery, which is part of the reason why the ESA opted to go with the Omega Speedmaster X-33 platform for the new Marstimer, rather than relying on software for a smartwatch. 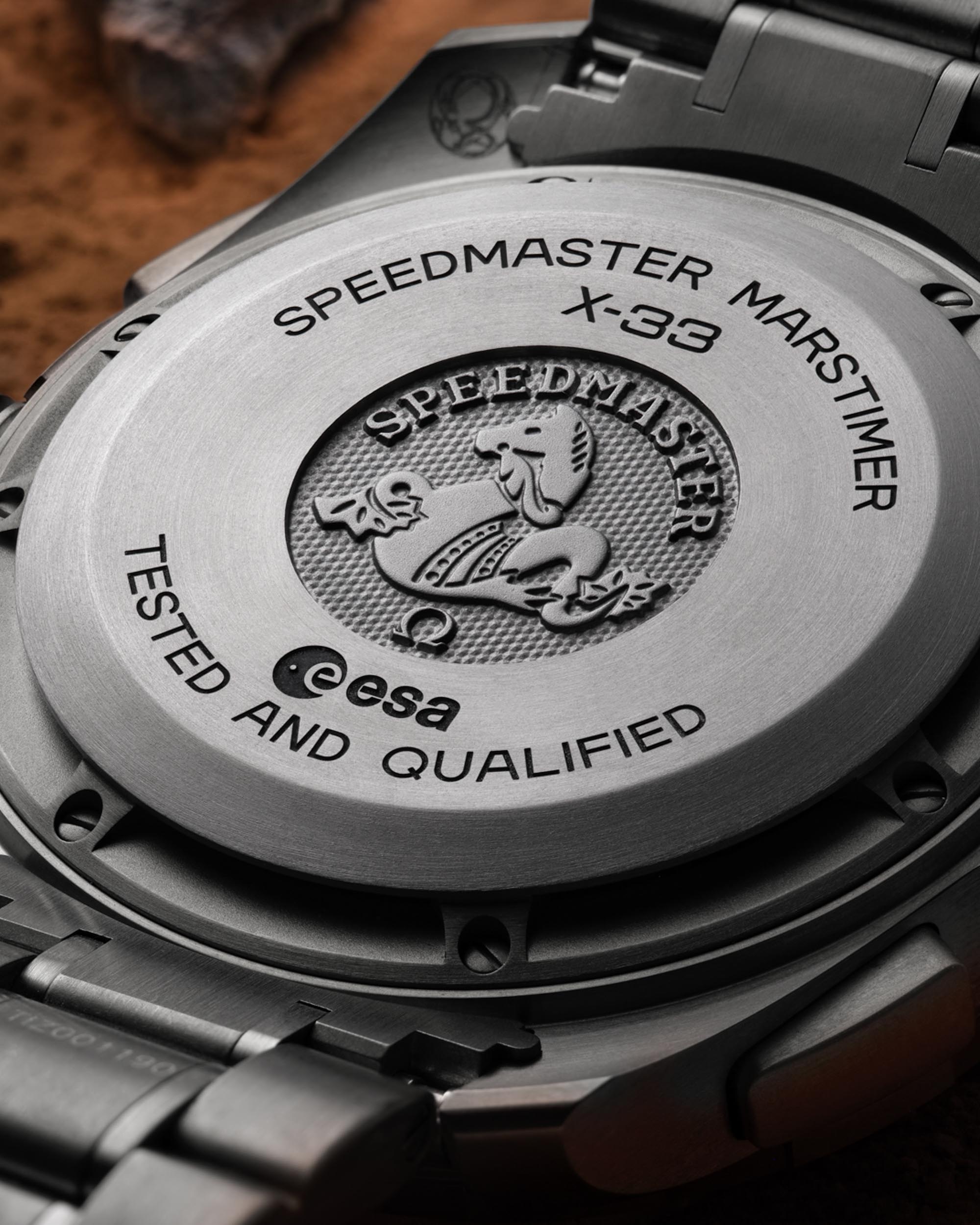 Lastly, included with the new model is a matching titanium bracelet, which is crafted from both grade 2 and grade 5 titanium and follows the previous Speedmaster bracelet design, rather than the updated version that debuted on the new Moonwatch models with Cal. 3861 movements. Additionally, the new Omega Speedmaster X-33 Marstimer also comes with an alternate NATO strap that features thin accenting stripes on the edges in the same red hematite color that can be found throughout the rest of the watch, plus a color-coordinated strap changing tool to facilitate swapping between the two options. Additionally, rather than being packaged in a large presentation box that will ultimately need to be stored in a closet or on a shelf somewhere, Omega packages the new Speedmaster X-33 Marstimer inside of a special edition watch roll that depicts the Hebes Chasma (a unique steep-sided canyon on the surface of Mars) along its inner lining. 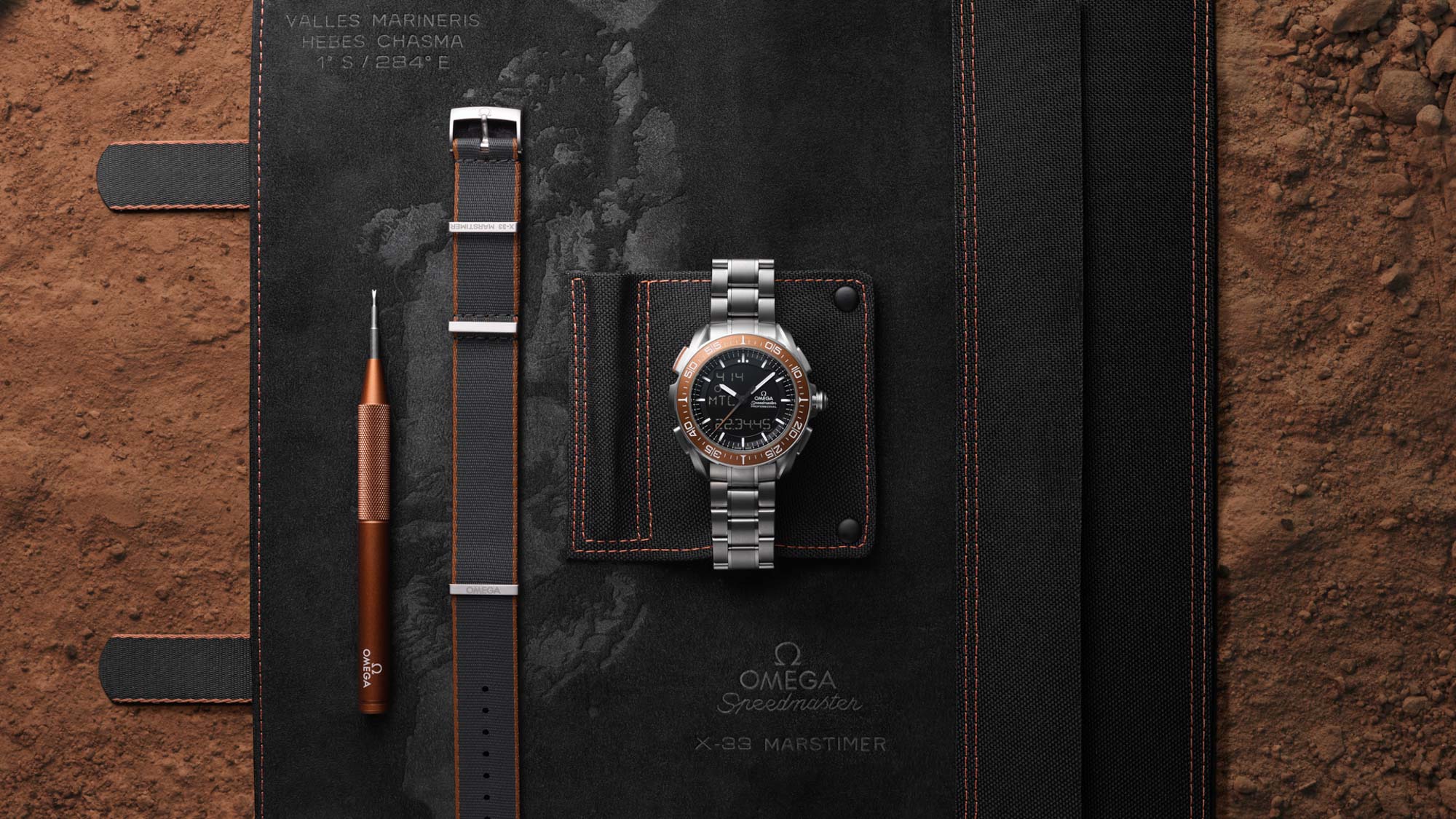 Realistically speaking, a crewed mission to Mars will still be a number of years away, but Omega has already created the ideal watch for the pioneering astronauts to use when the time comes for them to take the next step in human space travel legacy. In the same way that the classic manually-wound Speedmaster became the Moonwatch when it reached the surface of the moon, Omega is positioning the X-33 Marstimer to be the official Marswatch, when humans finally set foot on the Red Planet for the first time. With an official retail price of $6,400 USD, the new Omega Speedmaster X-33 Marstimer ref. 318.90.45.79.01.003 is priced just $500 more than the standard X-33 Skywalker model, and it comes in at the exact same price as the current generation manually-wound Moonwatch that is fitted with a hesalite crystal on a stainless steel bracelet, placing it right in-line with the rest of Omega’s current lineup. The Speedmaster’s space exploration history was cemented when it first landed on the moon, and with the launch of the new X-33 Marstimer, Omega has shown that it is committed to providing astronauts with purpose-built timepieces for the next generation of human space travel. For more information, please visit the brand’s website.