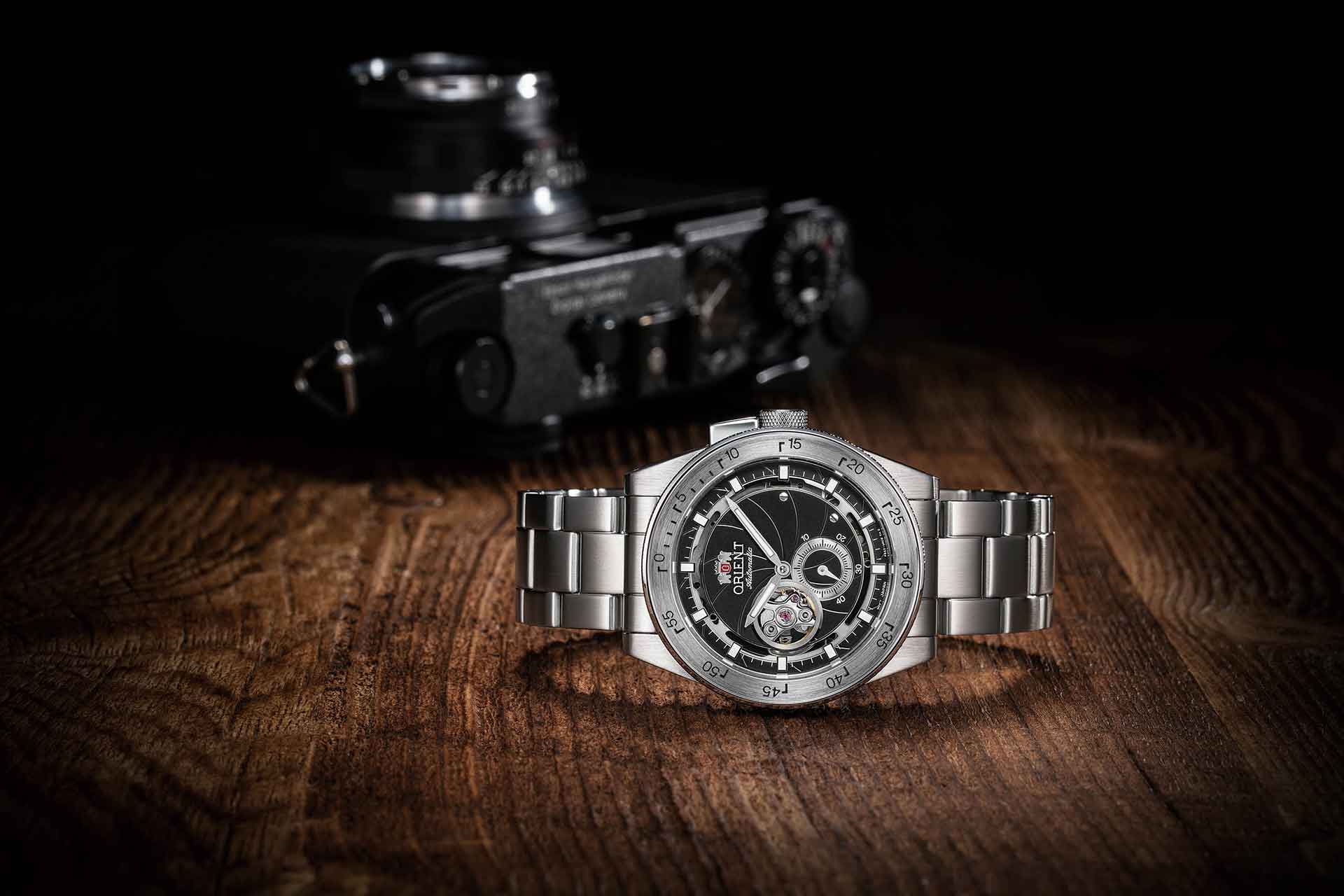 ORIENT is a Japanese watch company uniquely positioned to straddle the line between traditional watchmaking and popular culture. Although it believes that quality mechanical watches, created using traditional techniques and experienced craftsmanship, should be accessible to all, it remains in step with the spirit of the times. As a company founded in 1950, it is also deeply rooted in the iconic design codes of the ’50s and ’60s. ORIENT celebrates its 70th anniversary this year with two Revival collections, the Retro Future Camera and the Weekly Auto ORIENT King Diver, which represent ORIENT’s commitment to its reputation for offering attractive quality timepieces. It combines in-house mechanical movements and high-watchmaking finish with affordability.

When it was launched in 1965, the Weekly Auto ORIENT King Diver established the foundation for all future ORIENT dive watches. The rebooted anniversary version retains most of the signature design codes of the original, including the arrow-shaped hour hand, bar indexes, day of the week display at 6 o’clock, engraved caseback, and the independent crown for the rotating inner bezel at 2 o’clock (the winding crown is at 4 o’clock). There are, of course, modern updates. The new version is water resistant to 200 meters, and the strap can be upgraded to solid metal. The movement is the in-house automatic caliber F6922, with an accuracy rating of +25/-15 seconds a day and a 40-hour power reserve. The cases are stainless steel, and, at 43.8 mm-wide and 14 mm-thick, they are in line with ORIENT’s signature large cases.

There are four color variations, including three regular models in black, red, and green, plus a limited edition of 1,700 pieces with a graduated gold-to-black colored dial reminiscent of the vivid colors of the popular ORIENT Jaguar Focus watch from the 1970s.

The Retro Future Camera collection, originally launched in 2005, is inspired by the classic mechanical rangefinder cameras of the 1950s, with a distinctive dial designed to resemble a camera’s lens aperture blades. The bezel adds to the effect by mimicking the aperture ring on a mechanical camera. The crown and crown guard evoke the winding lever and the square top of a camera cover. New to the design is a caseback that simulates a viewfinder.

The watch is sporty, with large hour and minute hands and markers coated in a luminescent material and 50 meters of water resistance. There is a small seconds at 6 o’clock, and an opening at 9 o’clock to view the mechanical movement. The colors give it a mid-century vibe: There are four versions, including a green dial with gray-plated bezel, a black dial with silver bezel, a black dial with bronze-plated bezel, and a special, 2,300-piece limited edition with a graduated gold-to-black colored dial. 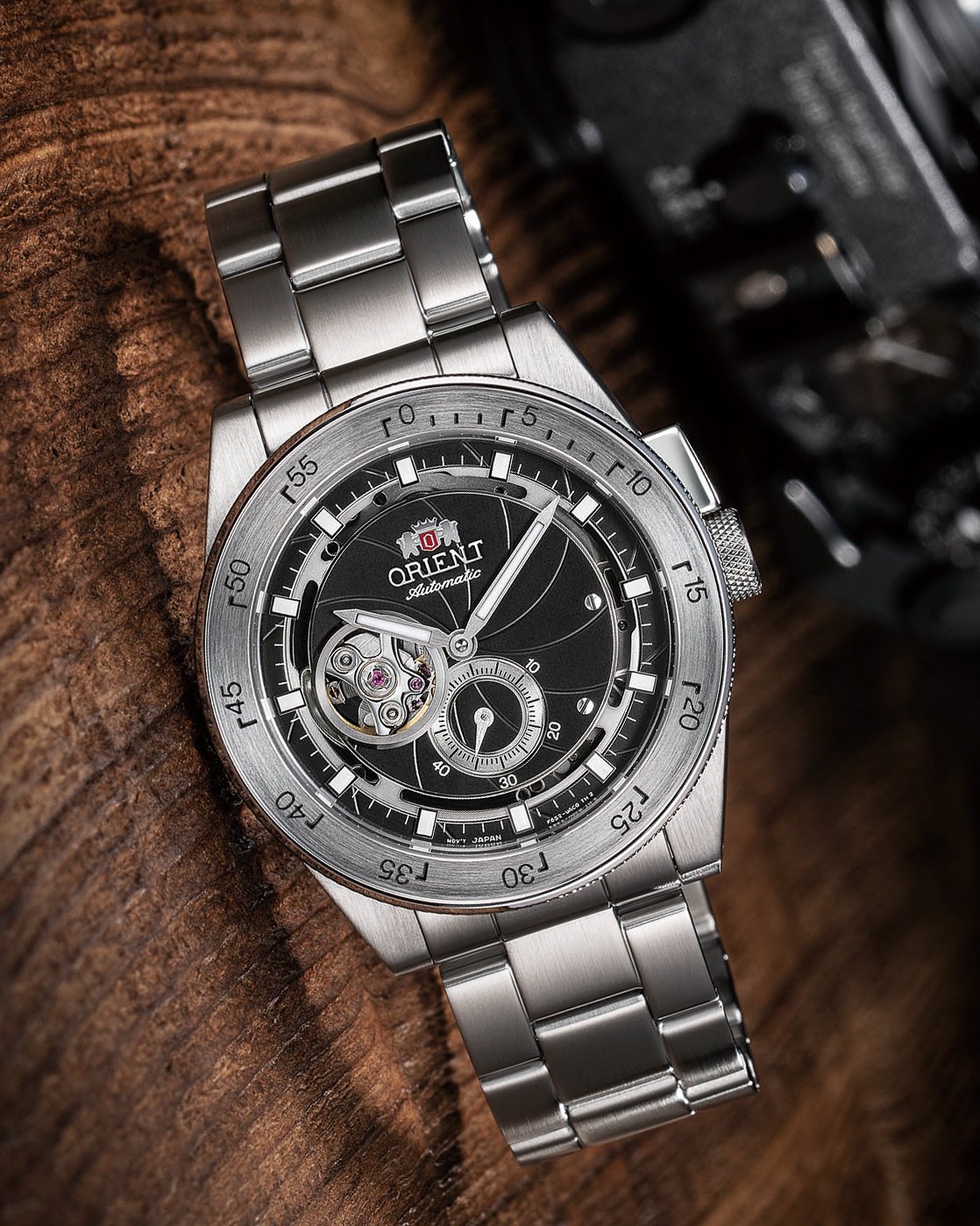 The watches contain an in-house movement, the automatic caliber F6S22, with an accuracy rating of +25/-15 seconds a day, and a 40-hour power reserve. The stainless steel case measures a very wearable 40.8mm-wide by 12.6mm-thick. It comes on a stainless steel bracelet or a leather strap. It is water resistant to 50 meters and has a uni-directional rotating bezel. ORIENT combines its fine watchmaking heritage and craftsmanship with that of Seiko’s Epson Corporation, delivered through Epson’s global infrastructure. Epson has a long history of watchmaking. It has been manufacturing components for more than 75 years, and it created the world’s first quartz watch. The relationship between Epson and ORIENT Watch began in 1985 when both businesses shared essential resources. ORIENT Watch formally became a wholly-owned subsidiary of Epson in 2009 and was integrated into its parent company, Seiko Epson Corporation, in 2017.