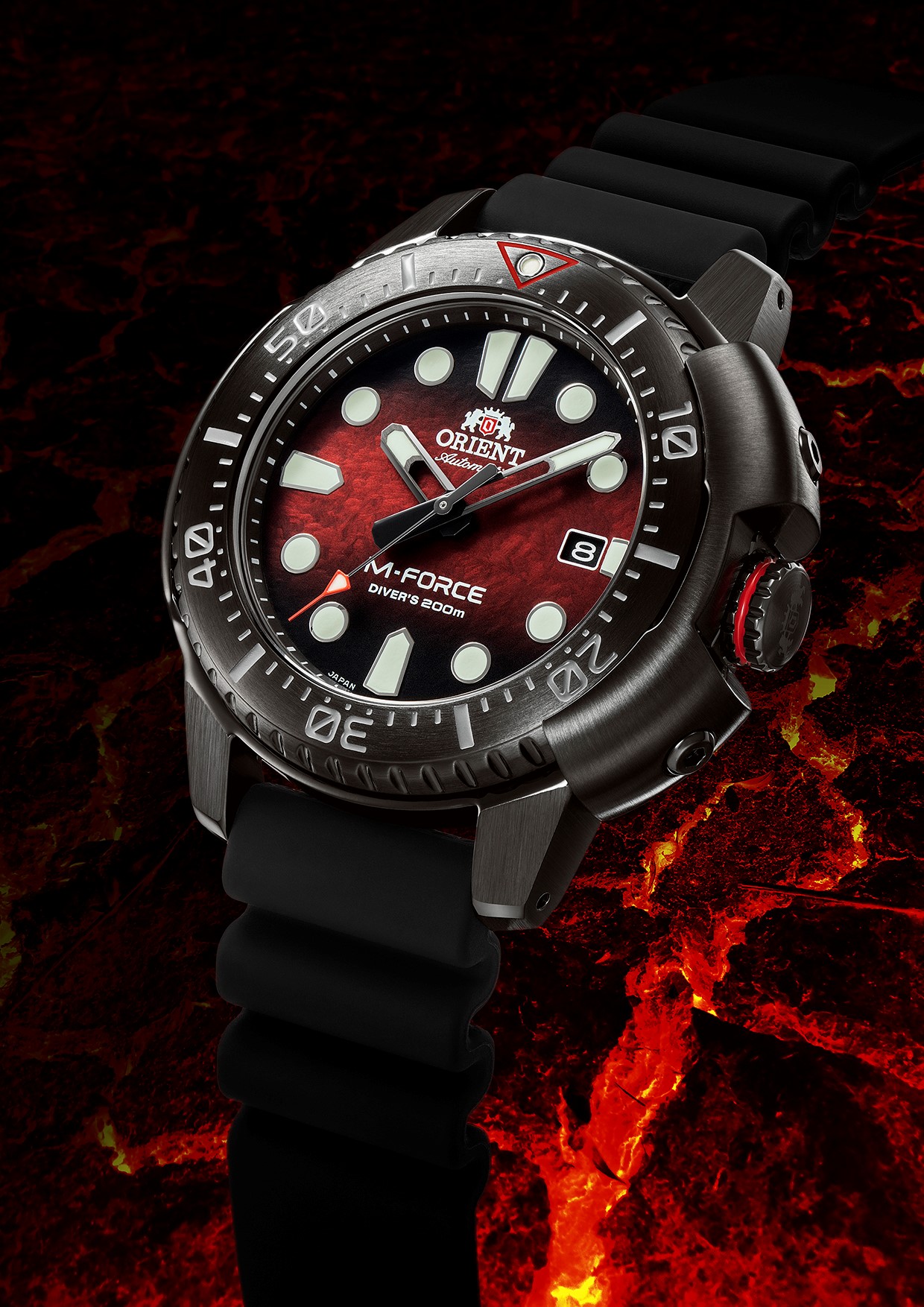 When Orient debuted the M-Force dive watch in 1997, the world was a decidedly different place. Hong Kong was newly out of British hands, and the vitriol surrounding America’s most divisive political topic du jour (stem cells) seemed ready to rip society apart. Yet 25 years on, the world is also the same as it ever was. After a quarter of a century, The Simpsons still defends the title for longest-running animated series, society is still fractious, and David Byrne is still a genius. Putting 1997 further into the rearview mirror, the launch of the first M-Force was closer to Watergate than to the present day. 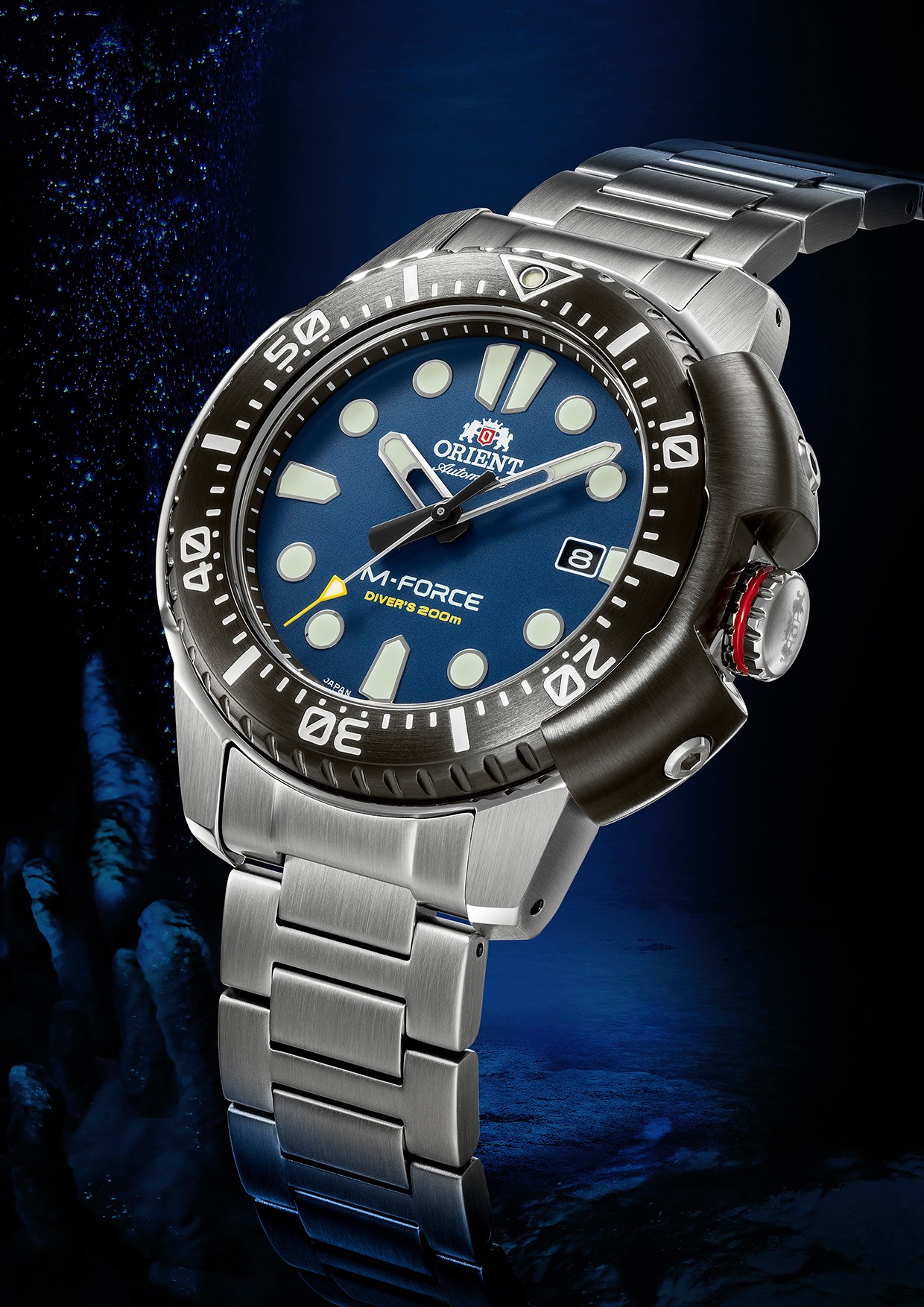 Orient’s 72-year age is by no means the longest in the world of horology, but it’s the sort of heritage young watch brands beg, borrow, and steal to achieve. For Orient, it all comes with the territory. While Orient’s older, eternal rival, Seiko, has undergone round after round of mitosis, resulting in a divergent family tree, Orient has spent nearly three-quarters of a century committed to developing watches that are always at least comparable and done so with a fraction of the fanfare. The 25-year-old M-Force line then stands as the perfect demonstration of this long, steady march.

When first introduced, the M-Force collection was proudly marketed as the culmination of “three Ms.” Mechanically inclined, the automatic caliber represented the first selling point while the eye-wateringly ‘90s case design was encapsulated by the second “M:” maverick. Finally, owing to its 47mm size, the third “M” stood for (do I even have to say it?) “massive.” It’s this charismatically earnest salesmanship that plays perfectly with the M-Force’s neo-retro vibe; it doesn’t take Don Draper to accurately place the M-Force marketing right alongside its styling, somewhere between Tamagotchis and LA Looks hair gel.

In 2022, Orient gets bonus points for leaning into this level of schtick instead of sheepishly brushing it under the rug. In fact, for the line’s refresh in 2020, the brand added a fourth “M”. Celebrating the “magnificence” of Earth’s natural beauty, Orient salutes planetary attributes, both concrete and theoretical, via three dial colorations. Fitting for a dive watch, blue represents the boundless sea, while orange constitutes the glowing deep sea vents that continually grow our planet. More abstractly, the lovingly textured red dial is said to evoke our planet’s vitality and strength.

What truly gives the new M-Force line character, however, is the audacious design cues that made the original great. Take for example the unmissable, chunky crown guard. Adding presence to an already authoritative profile, it personifies the “functional” elements that make us long for the ‘90s — windshield wipers on headlights, anyone? Even the numerals on the uni-directional bezel give off dot-matrix vibes, reminding us to be grateful that printer technology has progressed enough that paper jams are a thing of the past. Wait…. 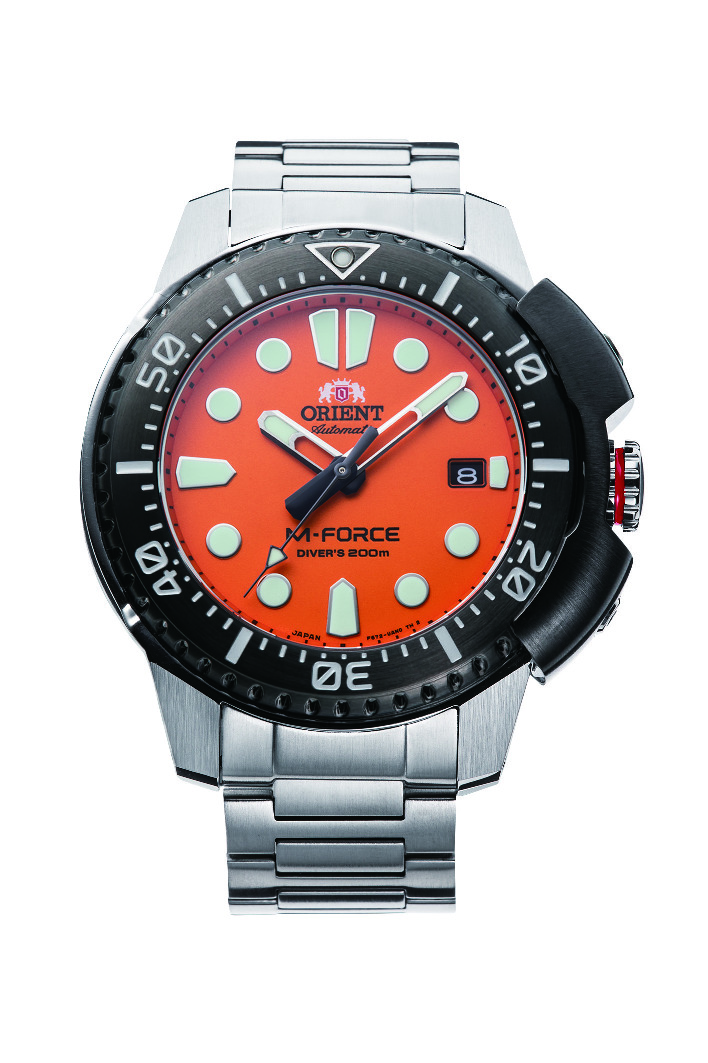 Of course, as much as the retro fun makes this watch special, the specs are seriously modern. Dimensional indices are framed in silver and highly luminous, while the partially skeletonized hands allow for maximum dial visibility while also showing up in the dark. Color-matched chapter rings allow precise minute-tracking as does the bezel, which, thanks to 60-minute ticks, means it’s easy to time out daily activities with precision.

The double-fold clasp features micro-adjustments (a modern must-have) and the sapphire crystal has anti-reflective coatings, further proving the M-Force’s chops as a modern diver that can run with the big dogs. To that end, 200m is ensured by the screwed caseback while the screw-down crown both looks and feels sturdy.

Inside, the M-Force proudly sports the in-house calibre F6727 movement which, by design, is more shock-resistant than its rivals. Representing a change, however, the F6727 lacks the power reserve indicator that has been made famous by previous generations of the M-Force, yet retains the 3 o’clock date window. Rounding out the design, the M-Force arrives on either high-quality black diver rubber or a stainless bracelet with fitted end links.

Add it all up and the M-Force scratches a very particular itch — namely, that of a watch with meaningful specs yet doesn’t take itself too seriously. Sheerly from a design perspective, it’s refreshing to see a watchmaker taking style cues that are such a steep departure from that most standardized of styles: the dive watch. If the M-Force has just one lesson to teach, it’s the importance of keeping watchmaking honest. Price is $450 USD (blue dial/rubber) and $495 USD (black dial/bracelet, red dial/bracelet, black dial/rubber). For more details, please visit Orient’s website.