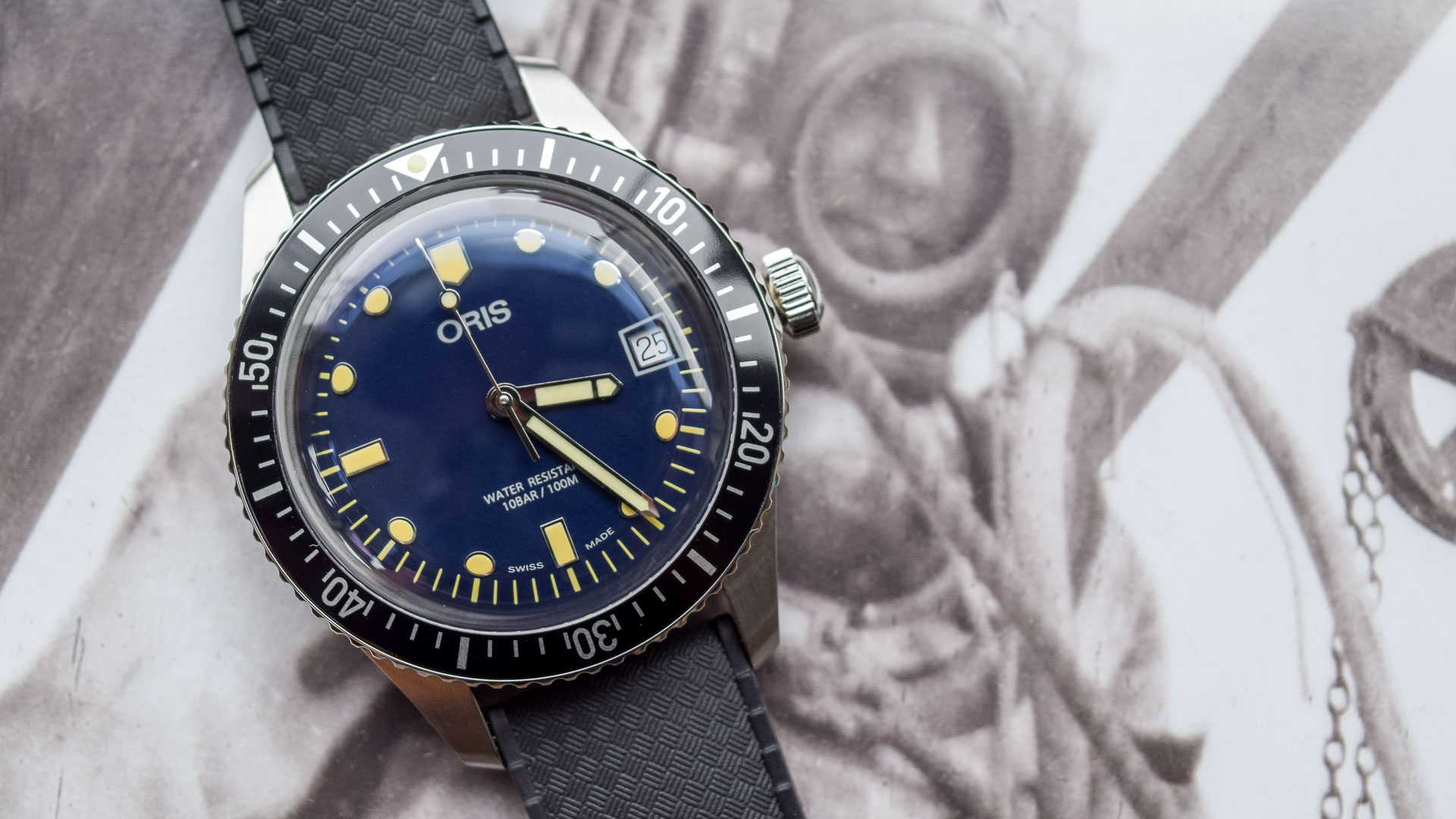 Combining a near replica-level of visual design authenticity with updated construction methods and technology at a fair price, Oris’s Diver Sixty-Five series has grown in size and popularity since its release in 2015. While initially available in a middle-of-the-road 40mm-diameter case, Oris has expanded the collection several times to include a 42mm version, as well as a new 36mm case size more in keeping with vintage tastes. In this Wrist Time Review, I’ll delve into the Oris Diver Sixty-Five 36mm to discover whether or not a modern watch in a surprisingly small size can scratch the vintage itch. 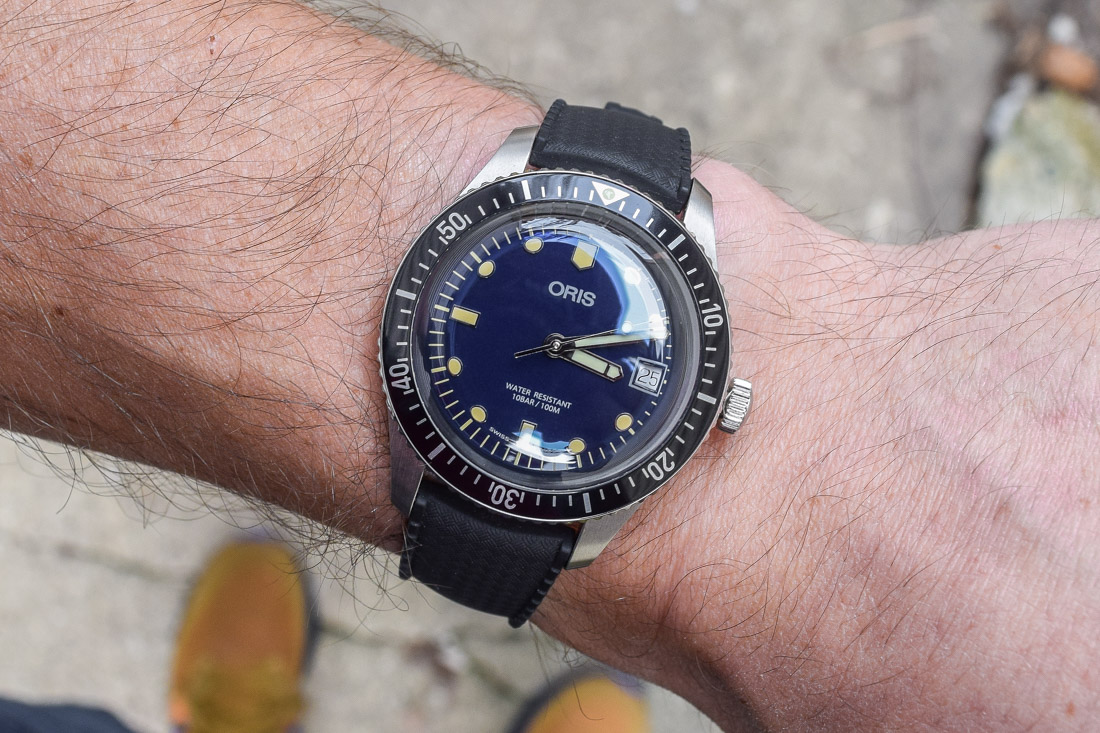 I’ve had my eye on the Sixty-Five since its release. Of all the vintage reissue watches in recent years, and my God there are lots, Oris stands almost alone in daring to create a modern reference that almost exactly replicates the design of one its 1960s pieces. (Longines’ Legend Diver also comes to mind.) 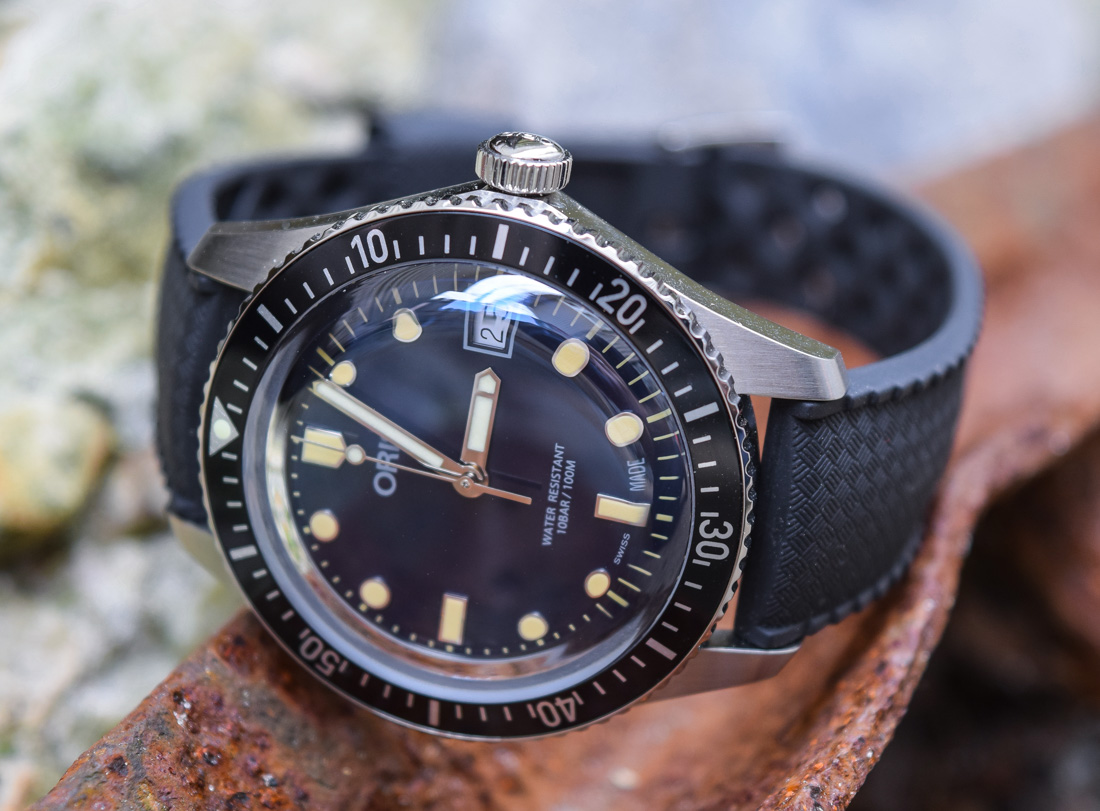 Naturally, modern tech was applied to the Diver Sixty-Five, where applicable, in the form of an AR-coated, domed sapphire crystal, as well as the Sellita SW-200 caliber, but the dial, bezel, case shape, and even tropic-style strap were all seemingly ripped from a mid-sixties Oris catalog. For those wanting a vintage-looking watch with modern reliability and performance, Oris nailed it with the Sixty-Five and they have been adding to the collection ever since.

For those after a diver in a “modern” size, Oris offer the Sixty-Five in 42mm, a sweet spot for many wrists, as well as the original 40mm. However, Oris’ decision to produce the 36mm discussed here was more eyebrow-raising, despite the fact the original reference for the Sixty-Five was, indeed, about that diameter. But how will such a small watch stack up in the modern watch world, especially one in which most diving watches are 42mm-wide, or more, and boast obscenely unnecessary water resistance ratings? 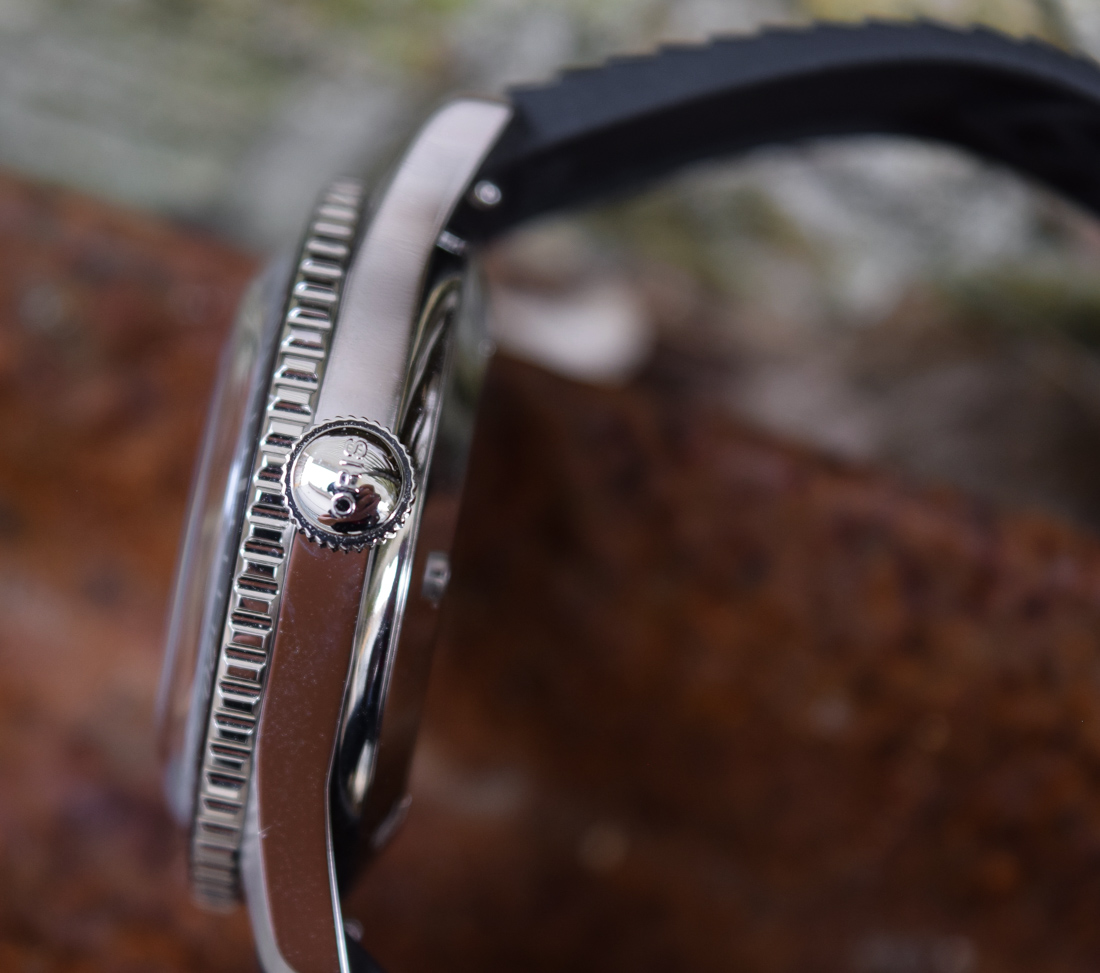 The Oris Diver Sixty-Five case is well executed, if a bit simple. With vertical brushing on top, polished sides and caseback, a signed, polished crown, and a unidirectional, 120-click bezel with a polished coin edge, the Sixty-Five 36 is all business and all vintage in both look and feel.

While some may argue over the lack of refinement in Sixty-Five’s case finishing, especially given the not terribly inexpensive price point, the watch is made to harken back to a vintage Oris with equally straightforward finishing. It really does look and feel like a vintage watch, an effect most notably driven home by the case size, a matter we must discuss in detail. 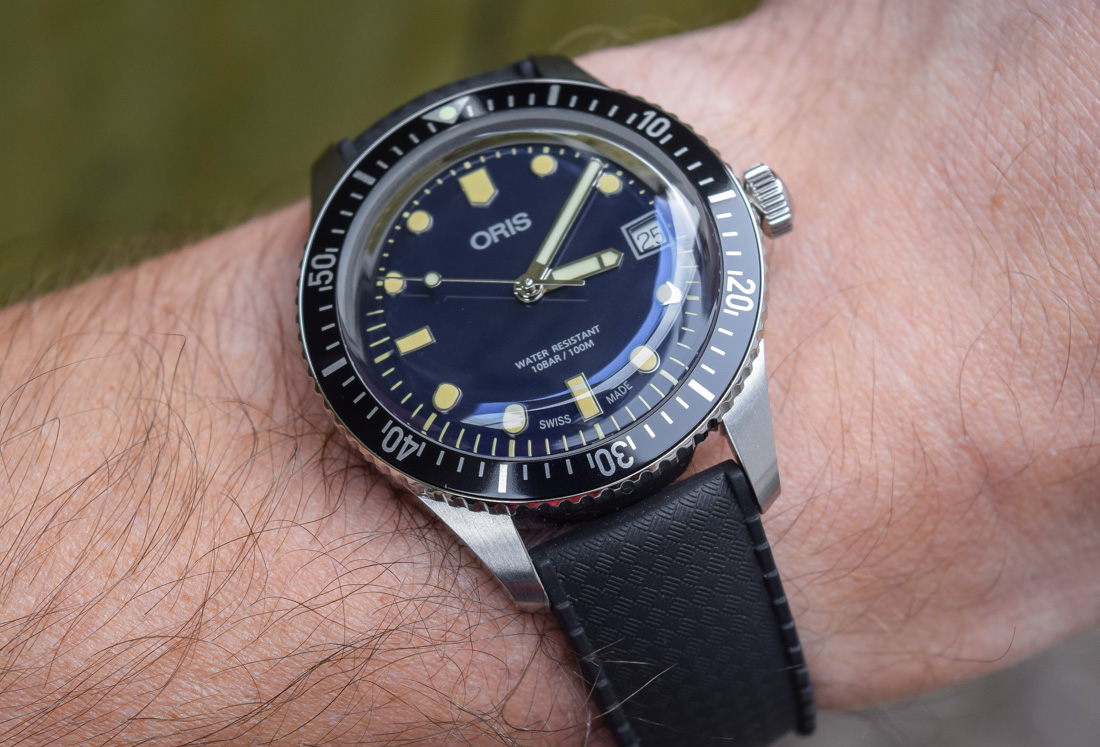 While I consider myself a fan of vintage watches, and I own several, I don’t actually wear them often. They are more delicate, especially where water intrusion is concerned, and generally more difficult and expensive to replace or repair than their descendents. I’m a diver by trade, and water is a real threat to my watches in my daily life. Vintage watches are also most often a bit smaller and, therefore, jarring when first strapped on. At 36mm-wide and 13mm-thick, the Oris Sixty-Five 36mm gave me exactly the same sensation.

Sure, a smaller, lighter watch looks absolutely tiny if it’s the first thing you put on after a Seiko Tuna, but that’s ok. Your eyes will adapt. When they do, they’ll be treated to a well done, Swiss-made diver  that oozes the old days of scuba, before dual-hose regulators and swimming trunks gave way to $1,500 diving computers and PADI Nitrox Wreck Archaeologist Ice Diver cards. 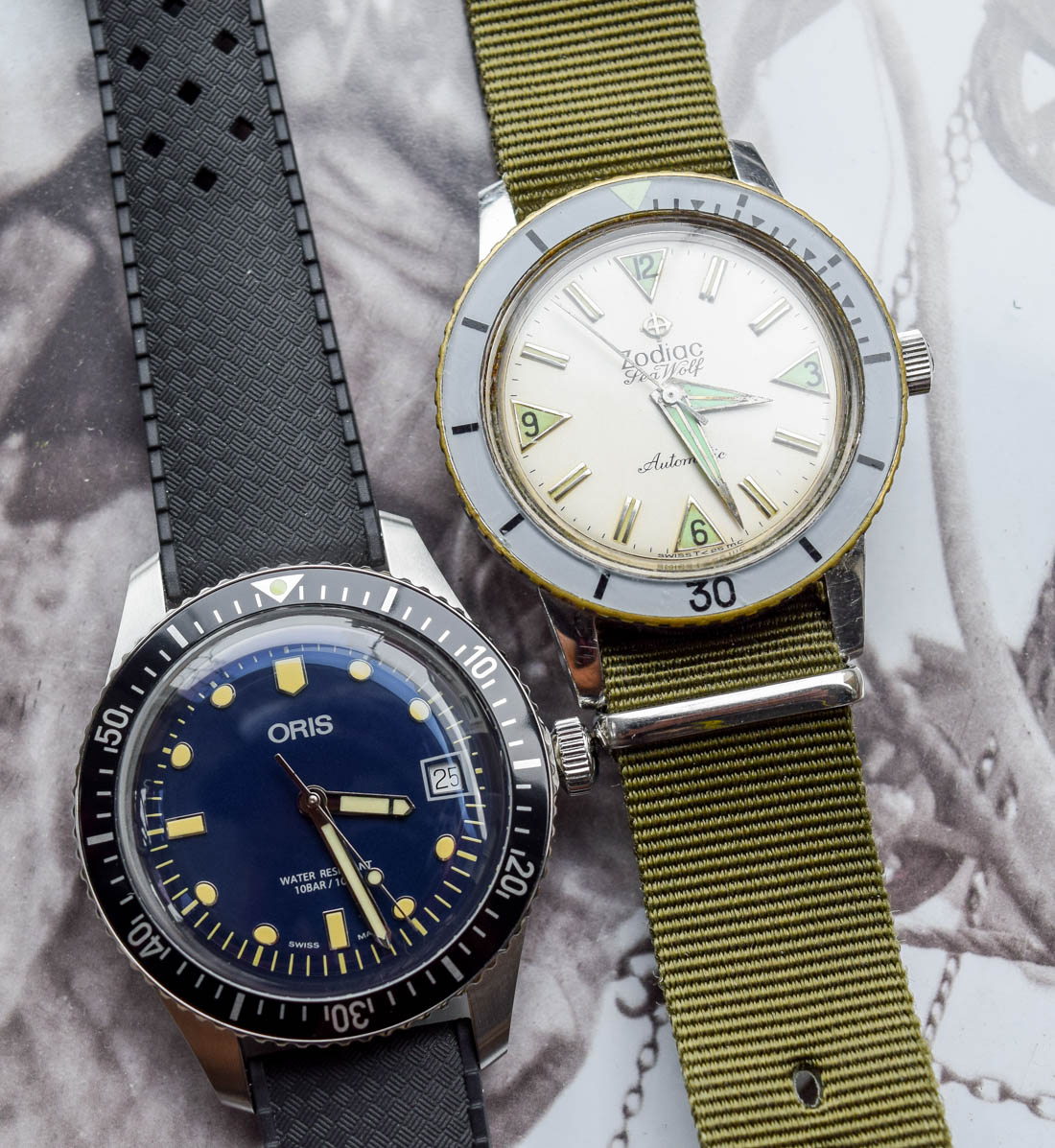 To sum up the Oris Sixty-Five’s smaller diameter, size does matter, but bigger is certainly not always better. If you like the look and feel of vintage watches, you will like wearing the Diver Sixty-Five 36. Going this small is also a bold choice from Oris. Even Tudor, lover of all things heritage, only went for 39mm in its smallest diving Black Bay. 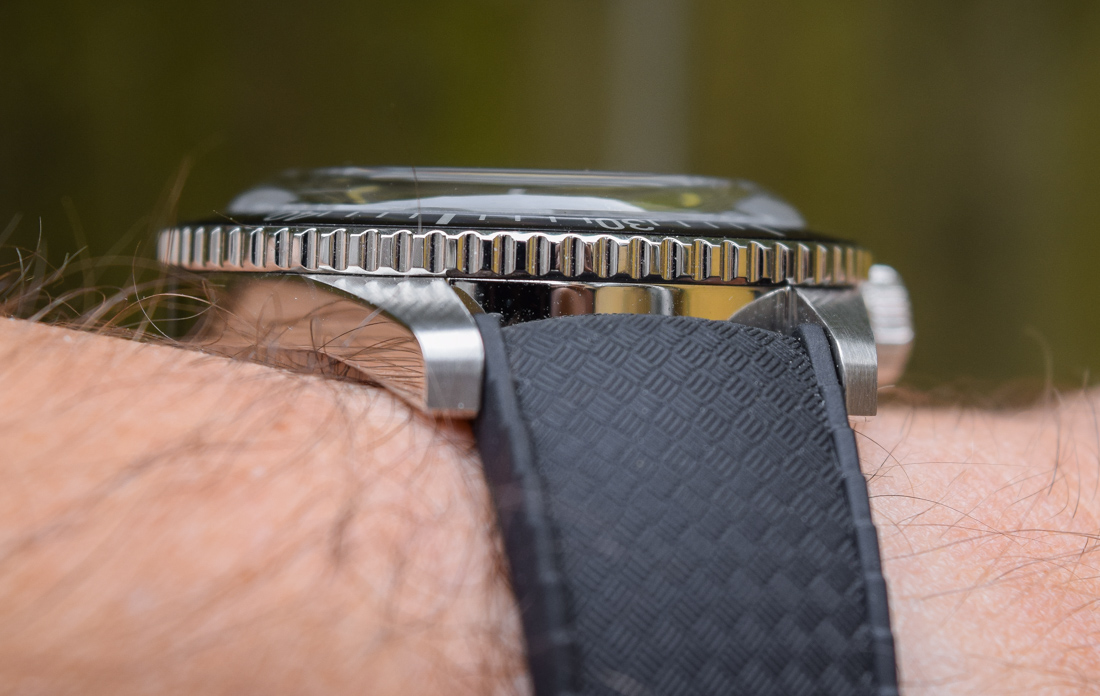 While the general design of the Diver-Sixty 36 dial is, as you’d imagine, the same as its larger brethren but smaller, the color is a really interesting deep blue you seldom see. Lying indoors on your desk, the Sixty-Five dial is almost black, a color some would call “midnight,” or the like, but out in the sun the blue comes alive, adding depth and interest to an otherwise understated design. 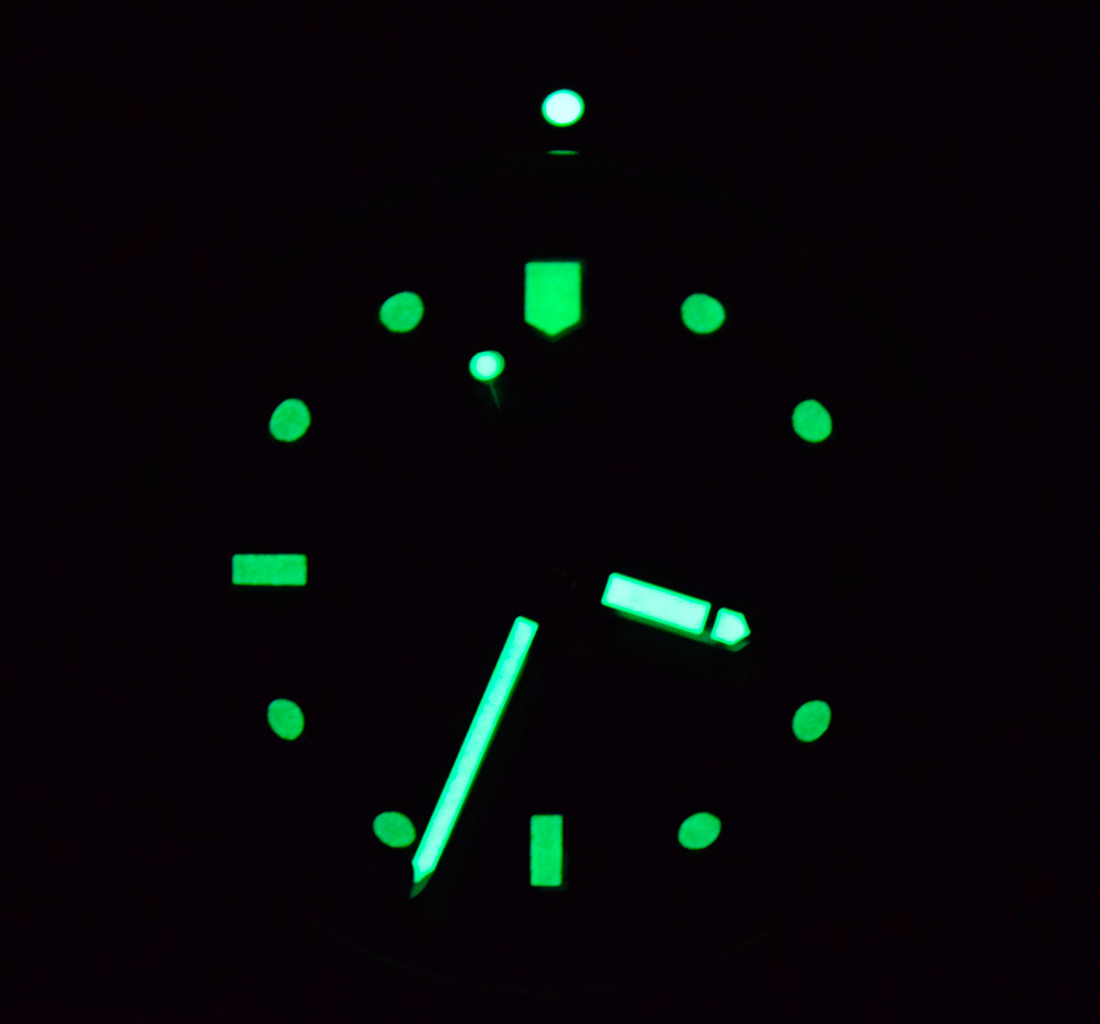 While the look is the same as the larger Oris Diver Sixty-Fives out there, the old-school dial is even more old-school when presented in a smaller package. Complementing the vintage feels, Oris has designed an excellent domed sapphire, AR coated (on the inside) crystal that perfectly replicates so many old acrylic crystals on so many old diver’s watches.

While I’m not personally the biggest fan of “faux vintage” watch lume, in this case, I get it. In a watch like the Sixty-Five, which so closely replicates its ancestor, Oris went for it all the way, offering a new watch that actually does look like an old watch. However, this particular lume just isn’t all that bright, despite the seemingly liberal application on the dial and hands. When you’ve just shelled out $1,900 for a diver, the lume should be great, faux vintage or not. 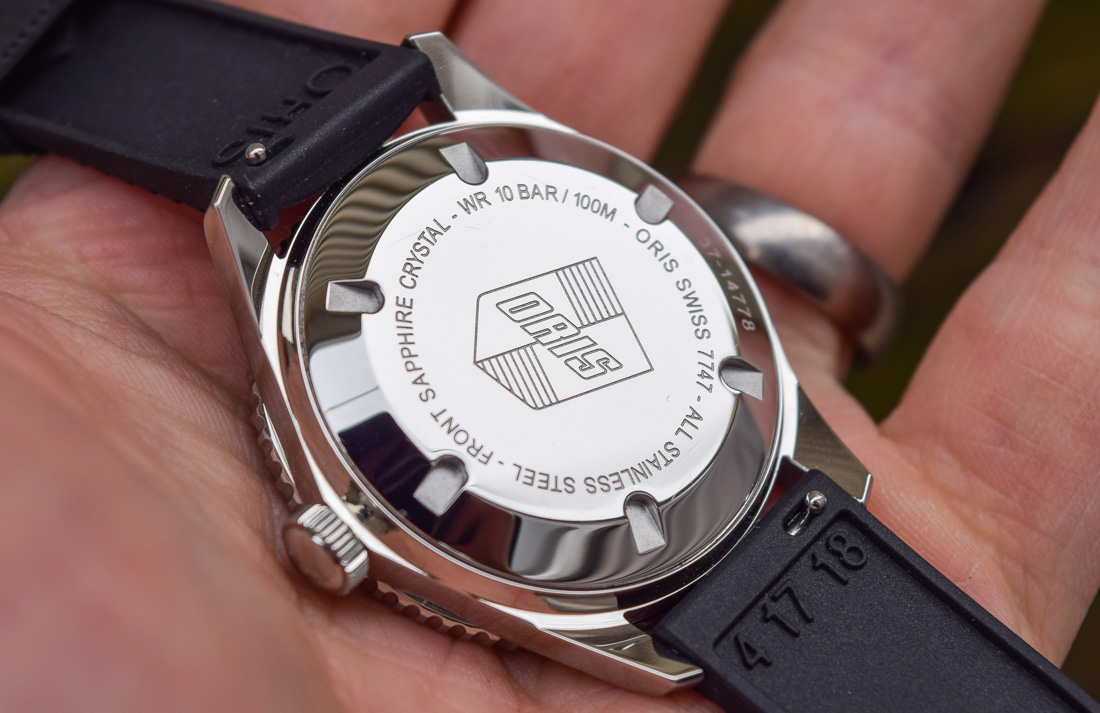 While the Sellita SW 200 isn’t necessarily sexy, it is a solid choice for a Swiss-made watch caliber in a sports watch like the Oris Diver Sixty-Five. This hacking, handwinding, automatic movement runs at 28,800vph on 26 jewels with a power reserve of 38 hours. More and more, watch brands are selecting Sellita over ETA due to the ease of availability and equally capable performance.

For those living under rocks, the SW200 is essentially the exact same movement as the ubiquitous ETA 2824-2, a point we covered in detail here. It’s unclear whether Oris do anything significant in terms of modifying the basic SW200 or simply include the caliber with a signed rotor. 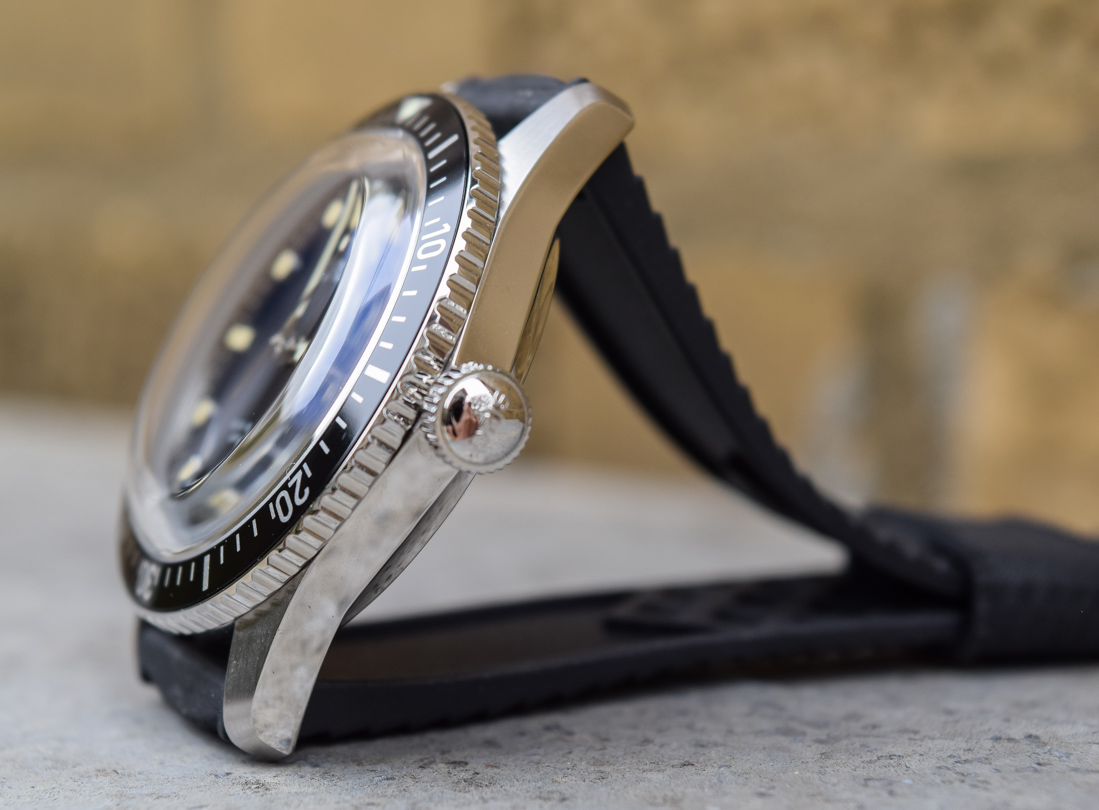 If the movement is, at it appears to be, not at all enhanced, modified, or messed with, some will take issue with the $1,900 price tag. There are certainly similarly appointed watches with vintage styling and the exact same movement as the Sixty-Five for a lot less coin, but the Oris name and accompanying heritage does carry a certain amount of weight. For what it’s worth, my Oris Sixty-Five 36 kept excellent time at plus three-four seconds a day when worn. 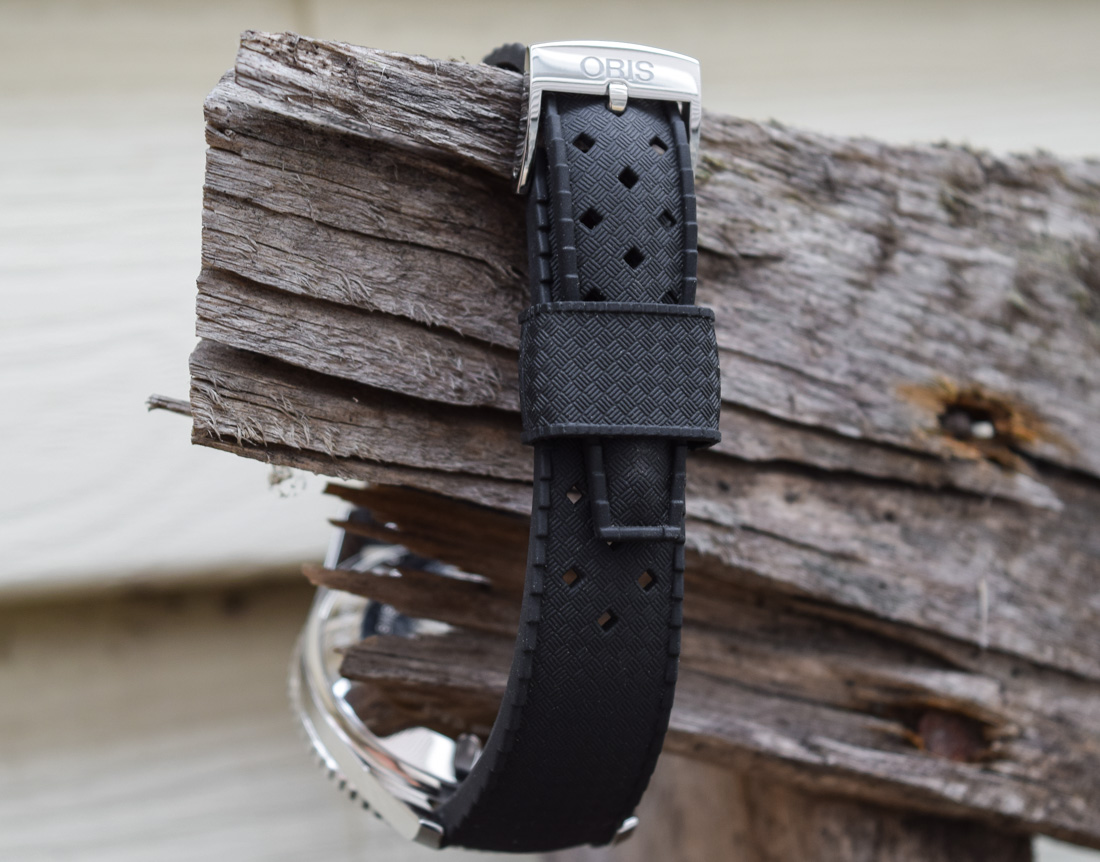 Part of what really makes this watch look and feel old is the Tropic style strap. For those out of the vintage diving loop, rubber straps of this style, many made by the Tropic brand, were the strap of choice on many diving watches of the sixties and seventies. At 17mm at the lugs, we’re already talking about a startlingly small strap by today’s standards, but the strap tapers to just 14mm, with a signed Oris buckle that also perfectly replicates the smaller buckles on Tropics of old. 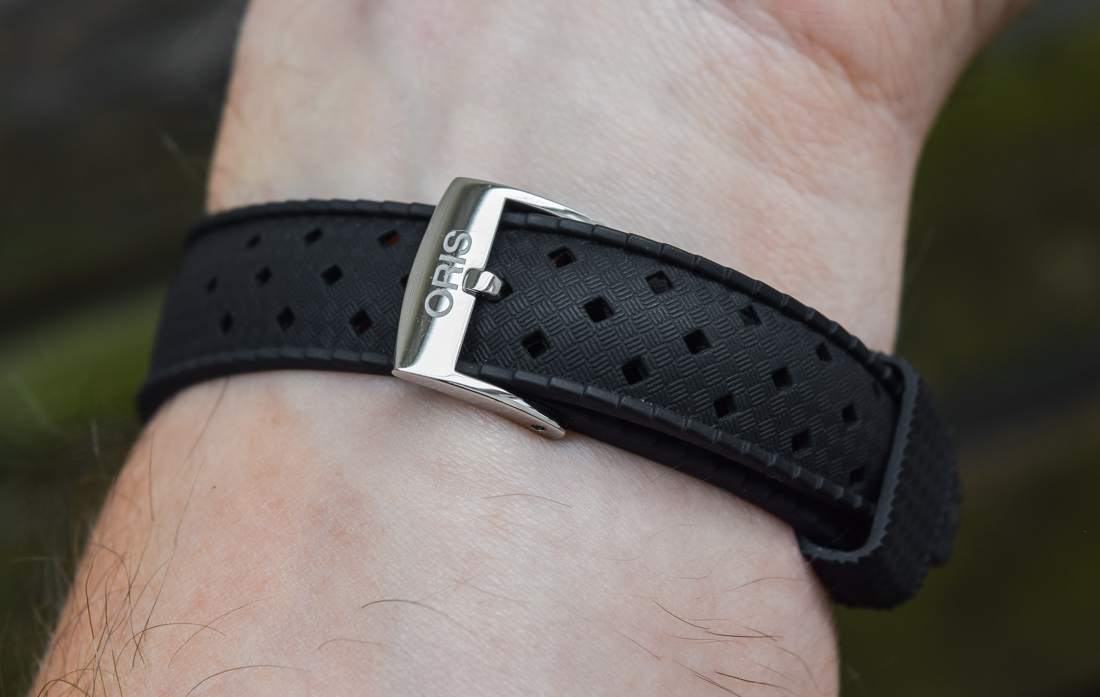 As the owner of many original Tropic straps, I can say this one perfectly replicates the look and feel, except for Oris’ crafty quick release feature at the lugs. However, on this watch, in this day and age, the strap does amplify the shock value of an already diminutive watch. For those who really want the watch to feel like they just made an excellent vintage eBay find, the strap is perfect.

For many others, I think either the beautiful rivet-style bracelet or an untapered (or less tapered) strap would aid in the overall appearance of heft on a smaller watch. An 18mm NATO also fits well, and gives the watch a little more presence.

As I’ve said, the Oris Diver Sixty-Five 36 is small, especially by today’s standards. For the very large-wristed out there, it simply might not work. For the Herculean out there, Oris does produce two other case sizes in this series, in an attempt to please everyone. However, the Sixty-Five 36 recreates the feel of a vintage watch, in both diameter and sensation, so well that the smaller size and associated look feels purposeful.

Frankly, times have changed. Virtually all men’s (full-size) watches are larger than they were in the sixties. Many watches are downright huge compared to those of yesteryear. Surely, a 36mm watch will be relegated to the wrists of the slender-wristed, perhaps boys and women. Many people, perhaps even myself included, thought exactly that of the Sixty-Five 36mm upon its release. Throughout the review process, I learned I was, quite frankly, wrong. As it turns out, 36mm might be a sweet spot more brands can and should go after, especially when the watch is as well executed as the Oris Diver Sixty-Five 36. 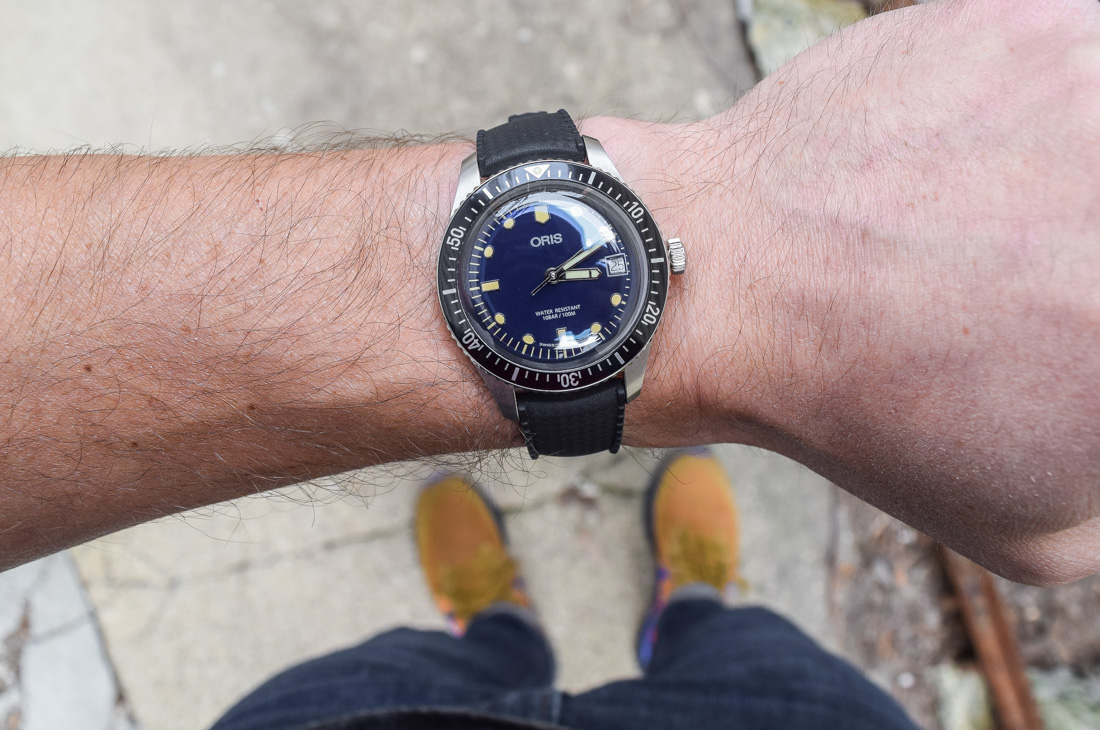 While small issues like the lackluster lume and the somewhat dainty strap take away from the overall impression for me, others likely won’t find these to be issues at all. The Oris Diver Sixty-Five 36 is the modern watch for the vintage watch-wearer who never buys new, a statement piece and time capsule for a size and style which is almost extinct in the industry today. At $1,900, the Diver Sixty-Five 36 may be a hard sell for some, but those willing to boldly go smaller will find a lot to like in a smaller package from Oris.  Learn more at oris.ch.