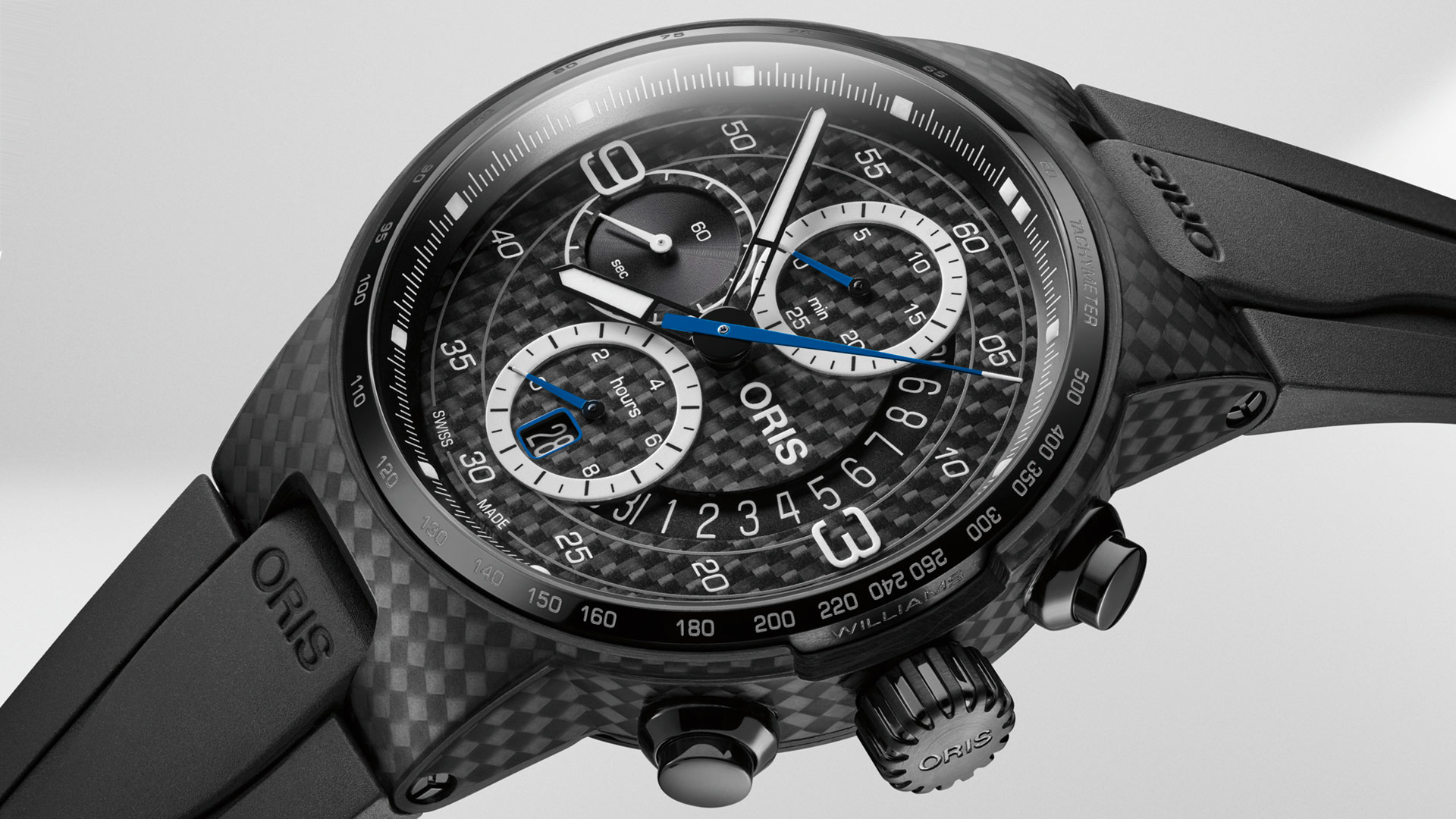 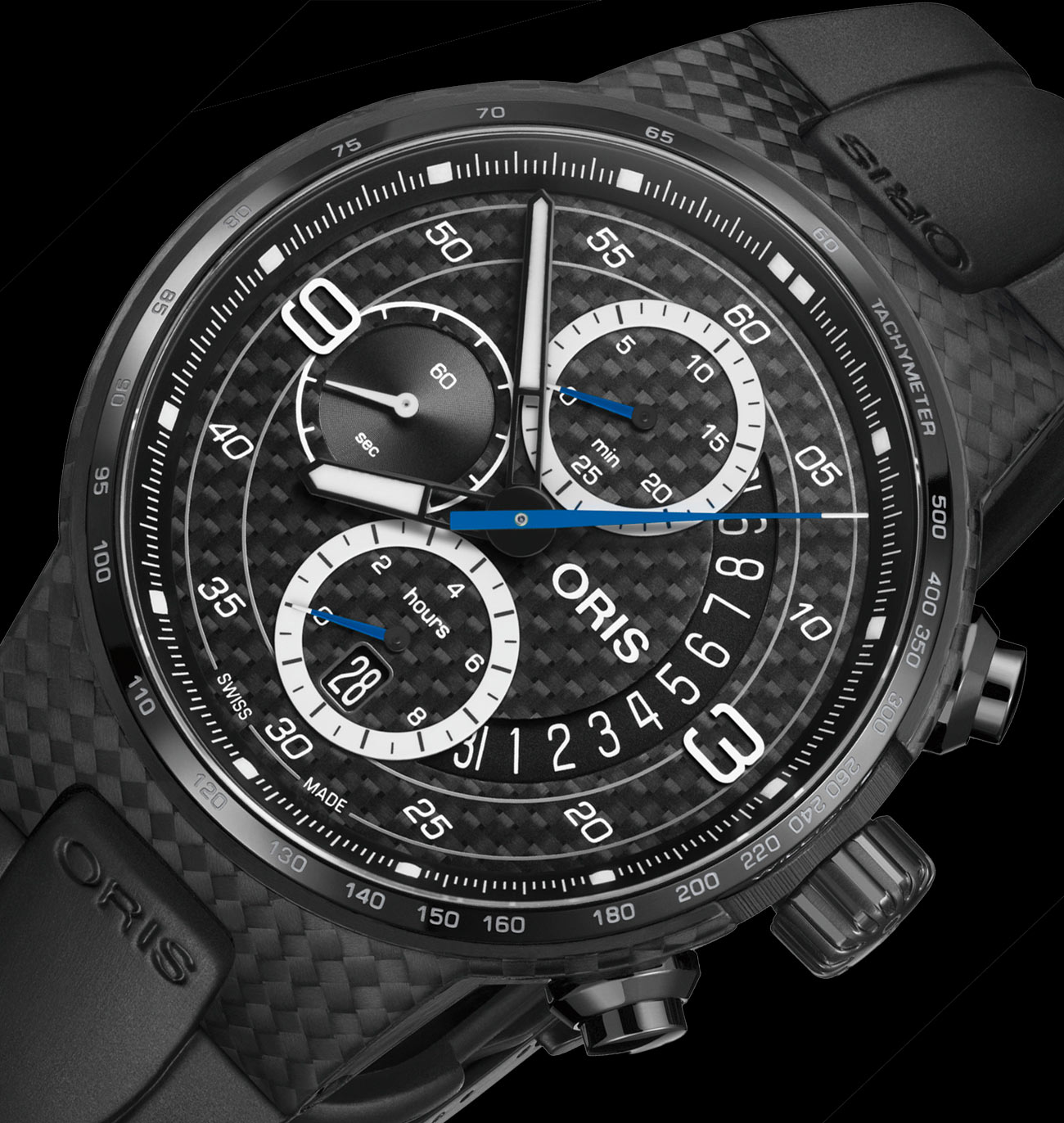 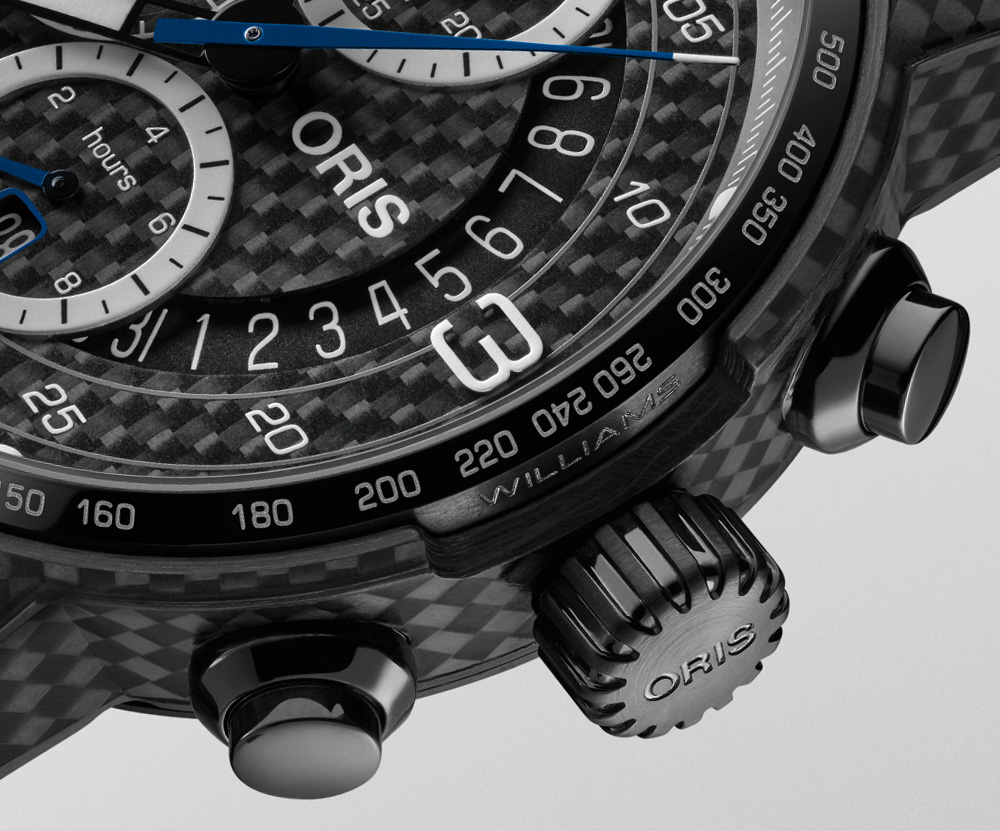 The exposed date wheel, white-ringed sub-dials, and other touches distinguish the Oris Williams FW41 from the Oris Williams Chronograph Carbon Valtteri Bottas we saw hands-on here. For example, that was similarly very carbon-fibery. There is also a non-limited Williams Chronograph Carbon Fibre Extreme. At 44mm wide, the interesting case design is a multi-piece construction, using carbon fiber and DLC-coated titanium, borrowing techniques from the Williams racing team to emulate the same lightweight style construction seen on Formula 1 cars. The brand says that the technique used is “unique to watchmaking,” but does not elaborate on that technique – a trade secret, perhaps. Anyhow, the middle case made of carbon fiber weighs only 7.2g, and while we can certainly expect the whole watch to be light, its full weight isn’t disclosed. 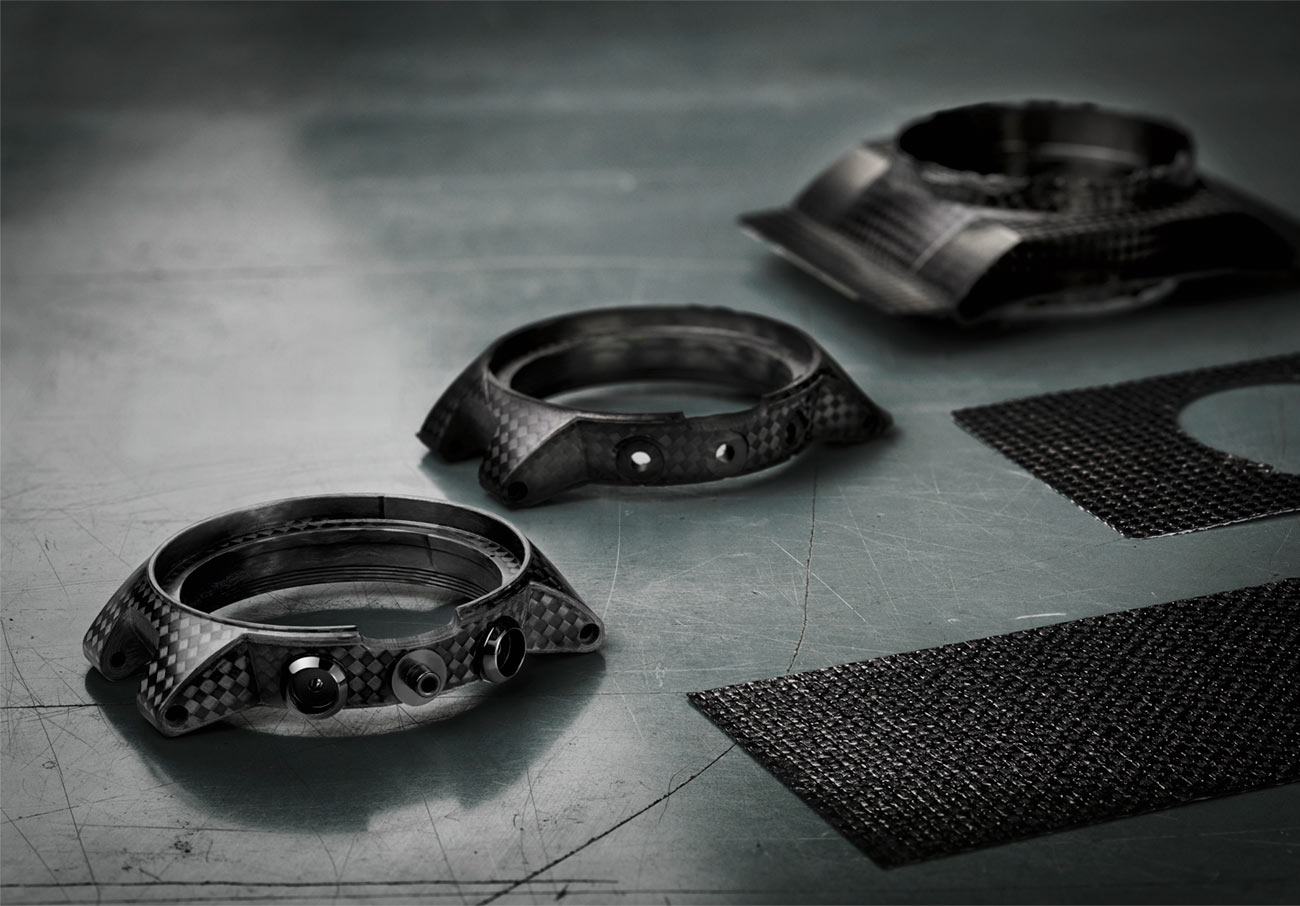 Aside from the noted carbon fiber, the Oris Williams FW41 watch features a sapphire crystal, titanium caseback, and titanium pushers and crown. Powering the FW41 is the Oris Cal. 774, built off a Sellita SW 500, which in turn, is a clone of the ETA 7750. An automatic chronograph movement with 25 jewels, a power reserve of 42 hours, and a frequency of 28,800 bph, it features the time and date, as well as 30-minute and 12-hour chronograph counters. 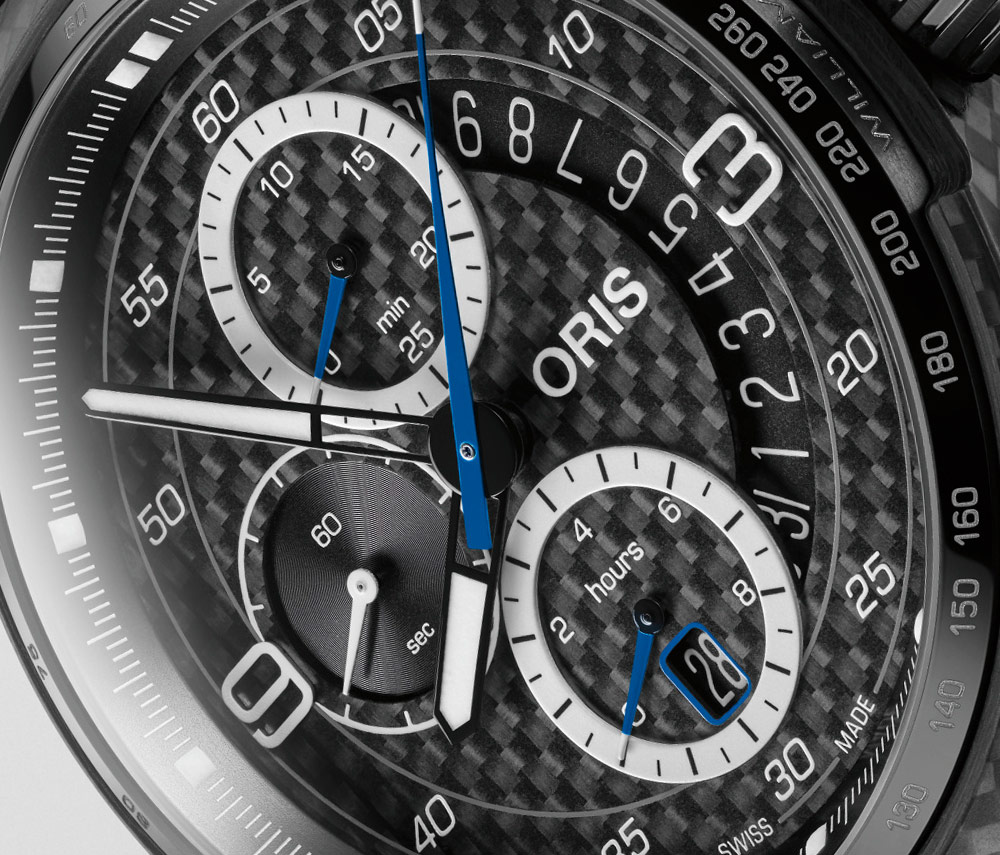 The dial of the Oris Williams FW41, again, is also crafted out of carbon fiber and features blue accents to acknowledge the Williams Racing colors. Note that the chronograph hands are color-coded blue to distinguish them from the running time. Holding the watch to your wrist is a branded rubber strap with a steel clasp. And, just in case, the FW41 is water-resistant to 100m. Oris has limited the production of the Oris Williams FW41 to 410 pieces to mark the Williams team’s 41st season competing in Formula 1. 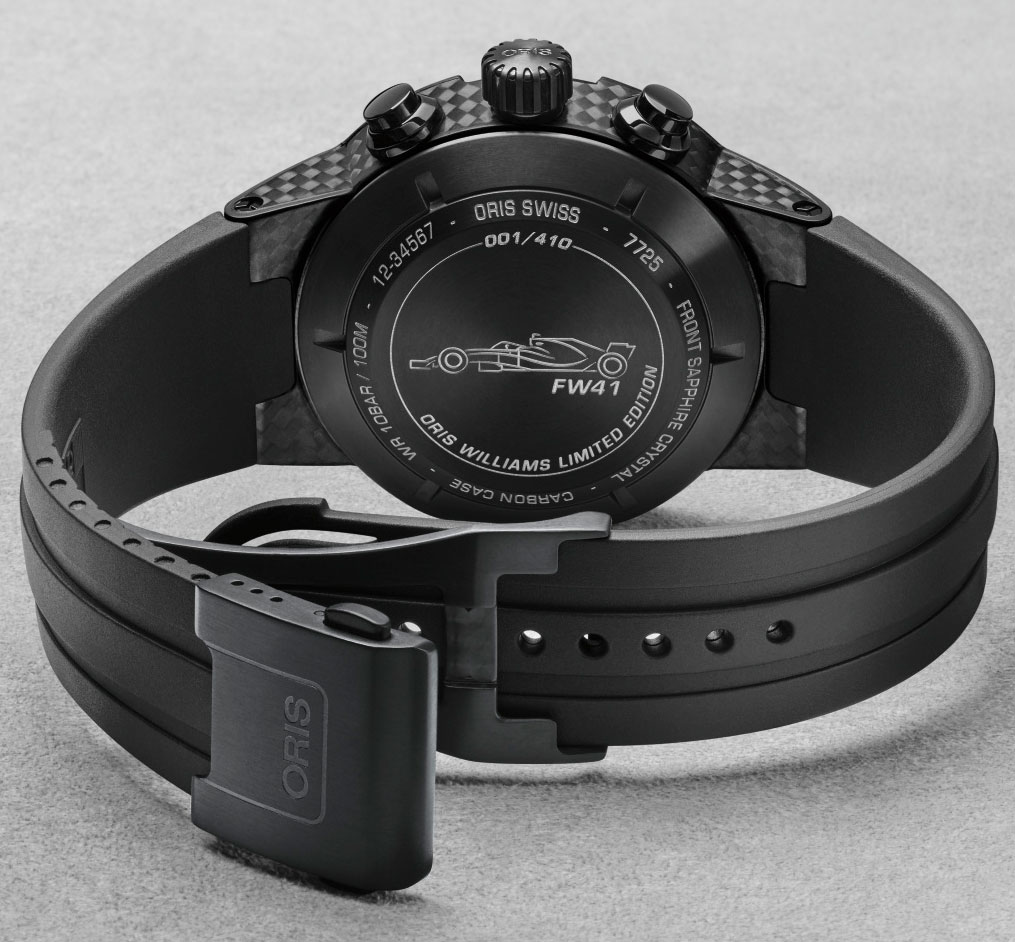 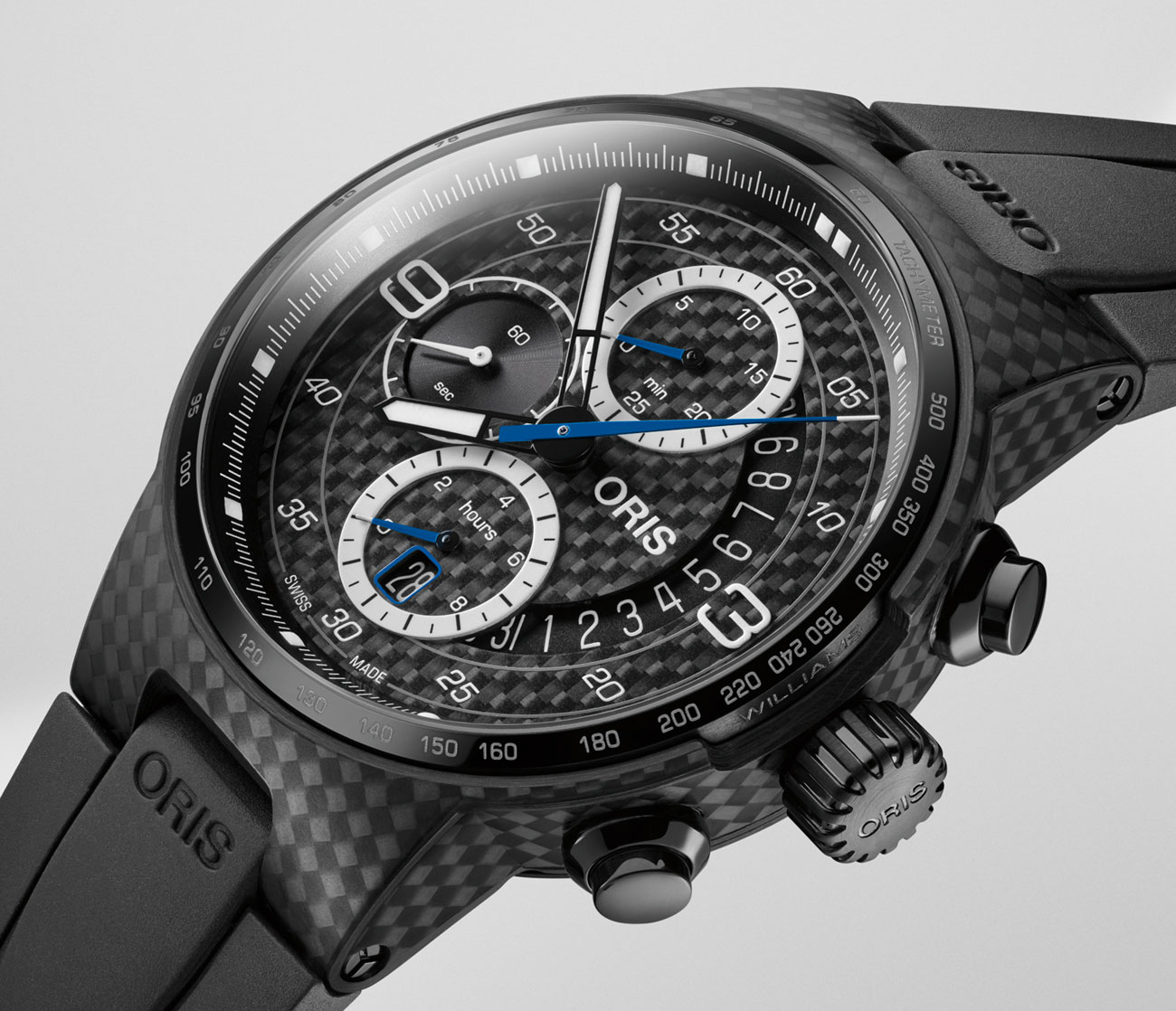 For me, the specialness of the term “limited edition” has been diluted by the watch industry in general, but Oris doesn’t go too overboard with conspicuous branding. They also sometimes go an appreciated step further by sponsoring worthy causes, such as an oceanic expedition to study or preserve the ocean – with a limited Aquis to commemorate it. That being said, the Oris Williams FW41 features unique styling, and I feel they did a good job connecting it to the F1 team and giving it a sense of purpose. The Oris Williams FW41 watch is limited, again, to 410 pieces, at a price of 4,350 CHF each. oris.ch