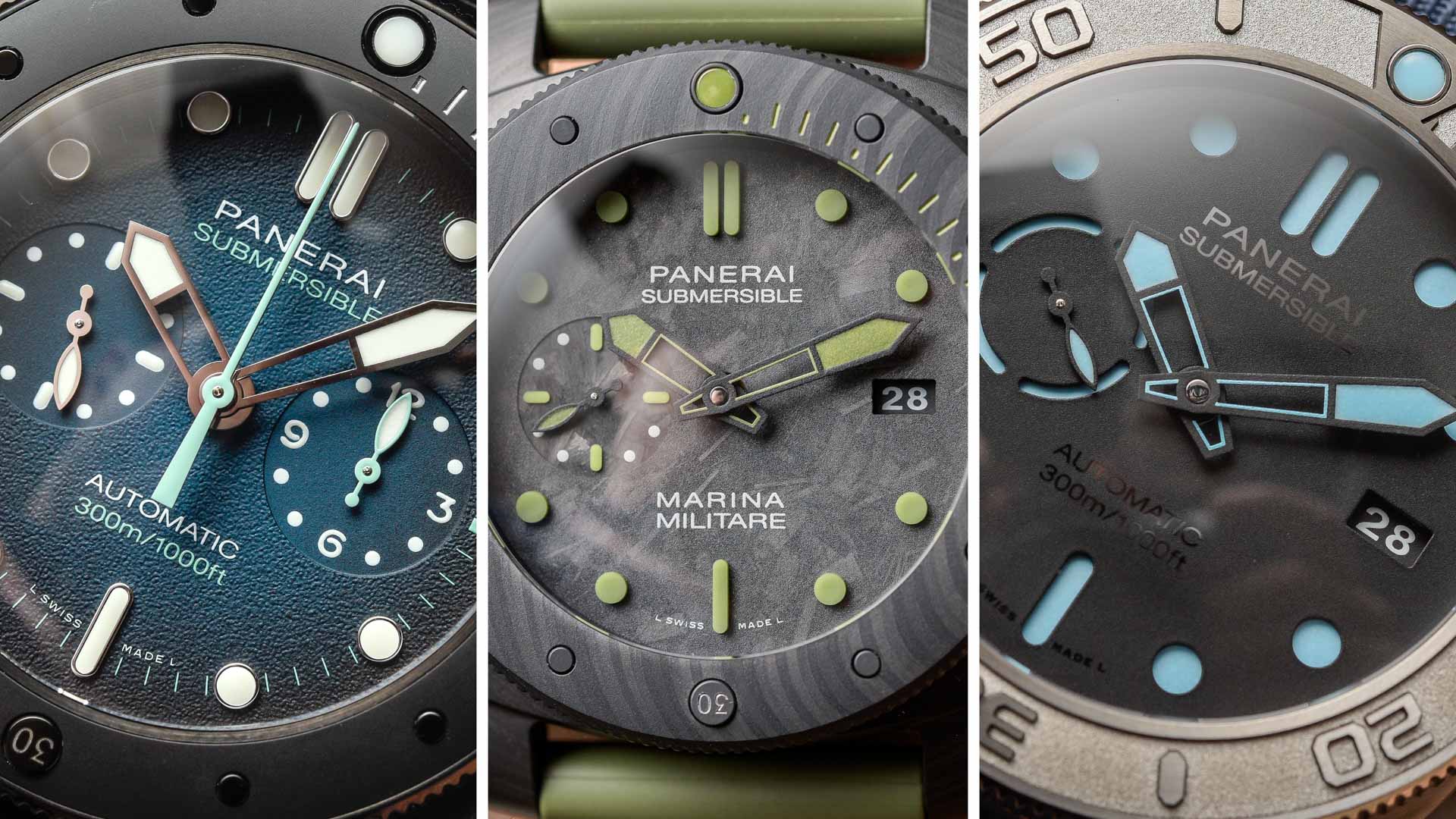 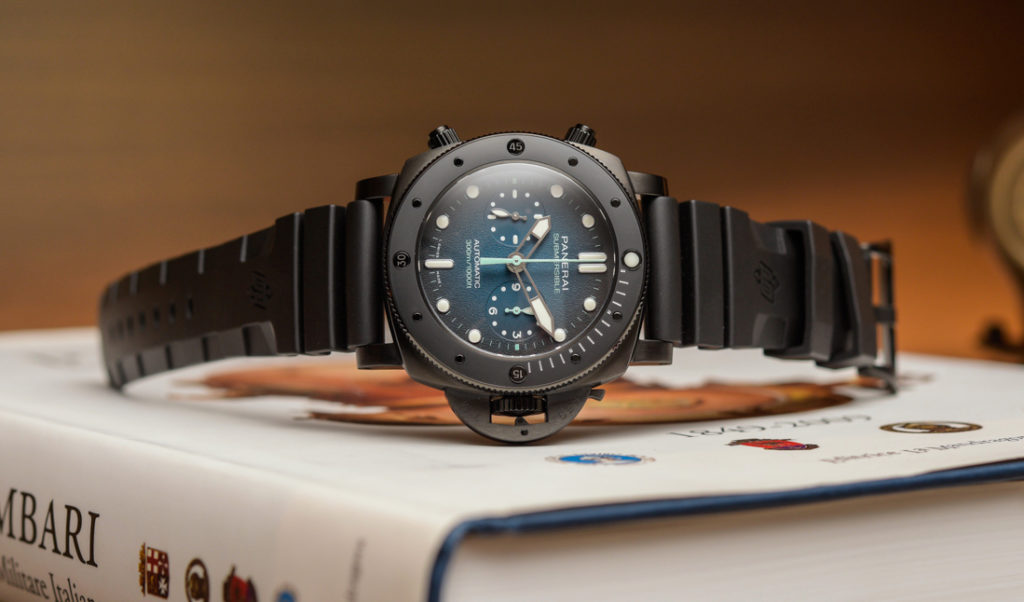 It should come as no surprise that the travel and tourism sector remains one of the world’s fastest growing (bookings hit $1.6 trillion in 2017, according to a recent Deloitte report), with an increasingly persistent trend being the value of “experiences over things.” With the watch industry focused on “things,” it should come as little surprise that savvy brands would try to marry the two — as Panerai indicated at SIHH with a new trio of extremely limited Submersible watches, each with a unique (and not-inexpensive) brand experience tied to their purchase. The premise is relatively simple: buy a Panerai for the exclusive privilege of belonging to an elite owner’s club that hangs out with Panerai’s adventurous brand ambassadors in exotic locales. 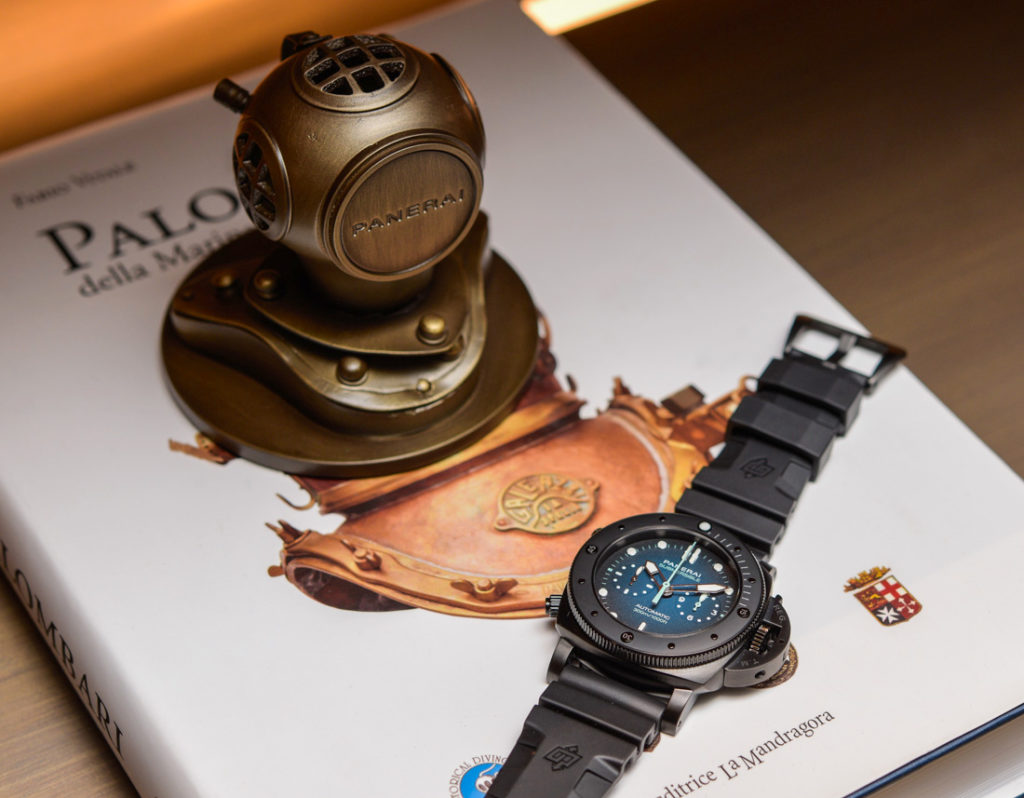 The concept of a luxury watch’s ownership club getting access to exclusive brand experiences and ambassadors isn’t exactly a new idea in the watch industry. In fact, it was sort of a marketing signature for then-Roger Dubuis CEO Jean-Marc Pontroué (now at Panerai), who made hot laps in a Lamborghini Huracán around a private Palm Springs race track or ripping an ultra-rare Aventador around the Las Vegas Motor Speedway a standard component of ownership for the brand’s highest-spending clients. Now that JMP is at the helm at Panerai, he’s migrated a similar focus on product and experiences, but with a heavier emphasis on far-flung locales and truly unique experiences, thanks to the equally unique lives of Panerai’s brand ambassadors: pioneering arctic explorer Mike Horn, world champion freediver and filmmaker Guillaume Néry, and the COMSUBIN, an elite Italian Navy diving unit. 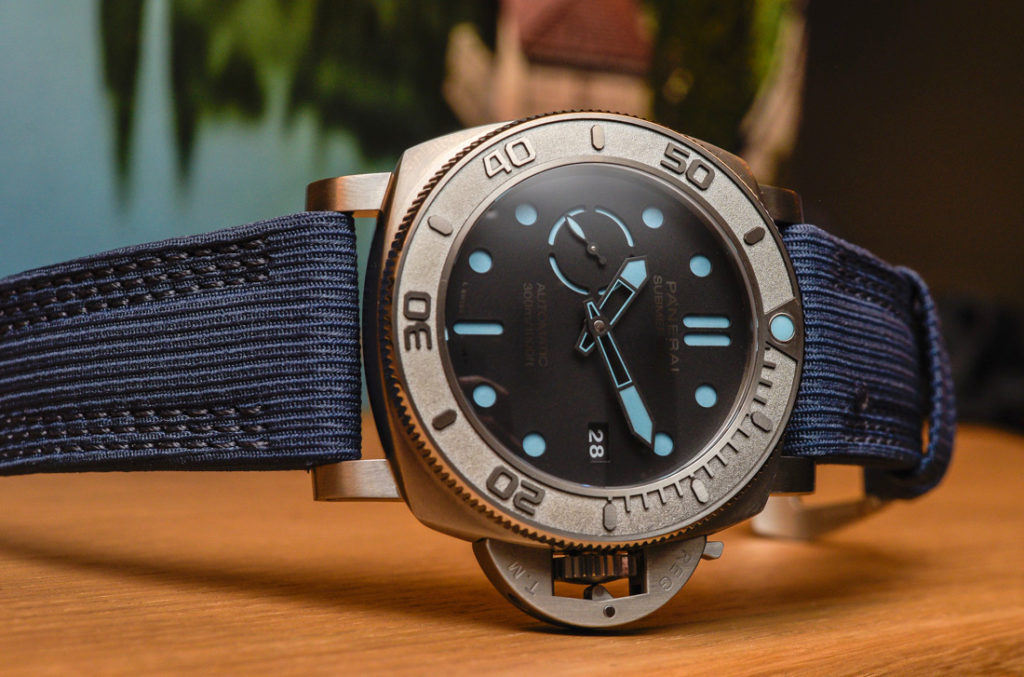 The latter two of these new Submersibles in the series are essentially re-skinned variants of new watches, but the third option attached to Mike Horn is an entirely new reference with a markedly different Submersible dial, and a brand new case built from ‘EcoTitanium’ – titanium alloy recycled from the aerospace industry. All three utilize the same 47mm case footprint and 300 meters of water resistance, but unsurprisingly deliver a very different experience on the wrist due to their unique case, dial, and movement executions. Each of these ‘experience’ watches are also numbered to fewer than 20 pieces each and come with a price tag in the neighborhood of $40,000, so it’s worth pointing out that the goal of these particular references isn’t mass-market, but giving die-hard Panawristi something truly unique. Bear in mind that each has its own standard reference if you’d rather own a standard Panerai dive chronograph and book your own travel to French Polynesia without a professional freediver in tow. 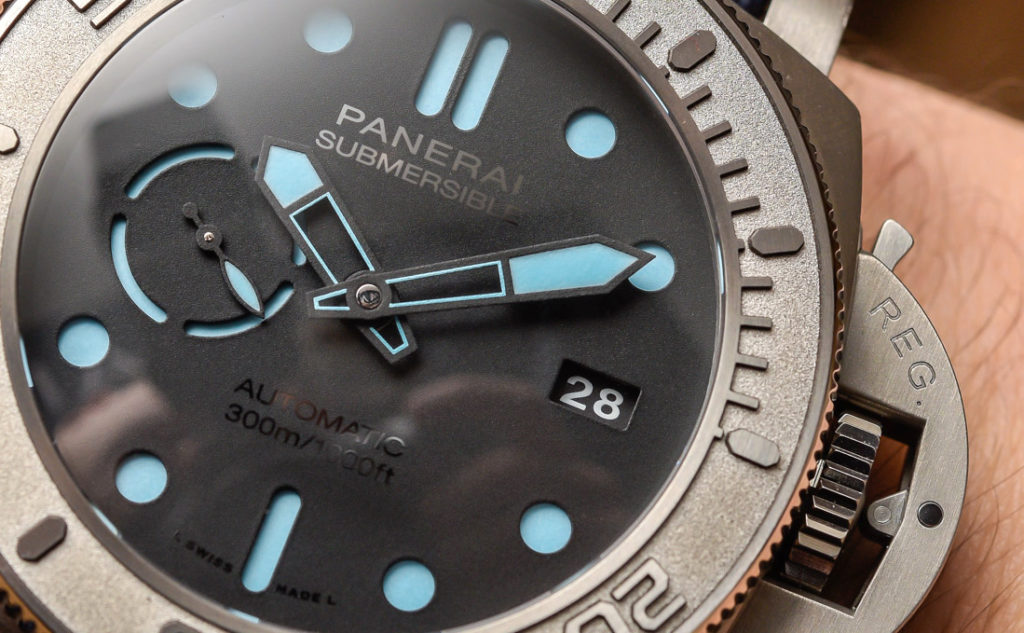 Housing the most notable changes of the three from a design and engineering standpoint is PAM985 — a 19-piece limited edition that unlocks an arctic expedition for its owners in Svalbard, Norway with 17-year Panerai ambassador Mike Horn, who is widely acknowledged as “the greatest living explorer” in the adventure community, having rightfully earned the title after being the first to complete a solo, unsupported crossing of Antarctica at its widest point in 2017. 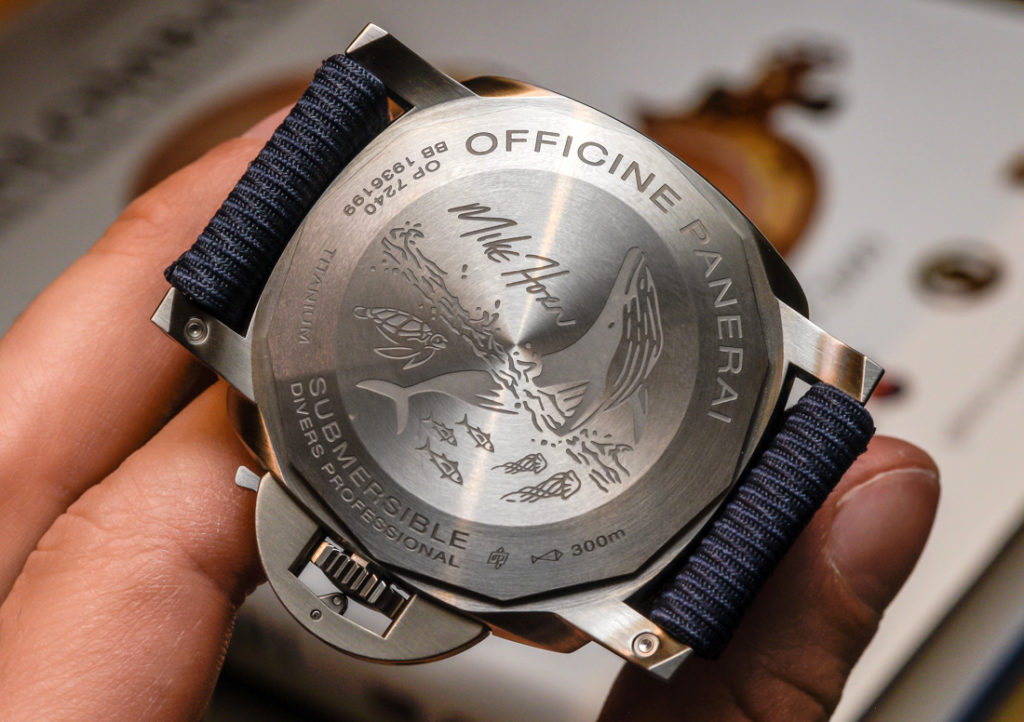 Unsurprisingly, Horn is also a passionate environmentalist, so it makes sense that this Submersible utilizes Panerai’s newest sustainable manufacturing technologies, including the EcoTitanium case, a new presentation box made from 100% recycled materials (all of Panerai’s new Submersible watches will ship in these new boxes), and a handsome and surprisingly comfortable new strap, made from three recycled plastic bottles. 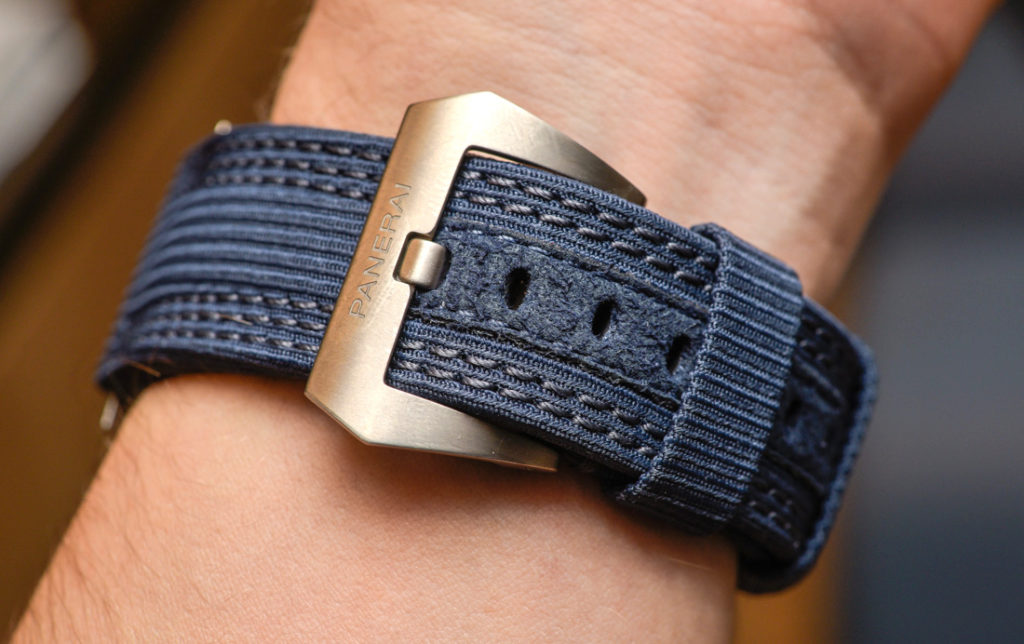 Charity has long been a major component of many dive watches, but recycled elements are, oddly enough, a relatively new concept in watchmaking. Last year’s Oris Diver 65, followed by the excellent Breitling x Outerknown collaboration each shipped with different forms of recycled nylon straps, but Panerai manages to make a two-piece strap that looks and feels like a truly premium, luxury product, which will also will be readily available for purchase at Panerai boutiques later this year, comparably priced to the brand’s leather and rubber offerings. 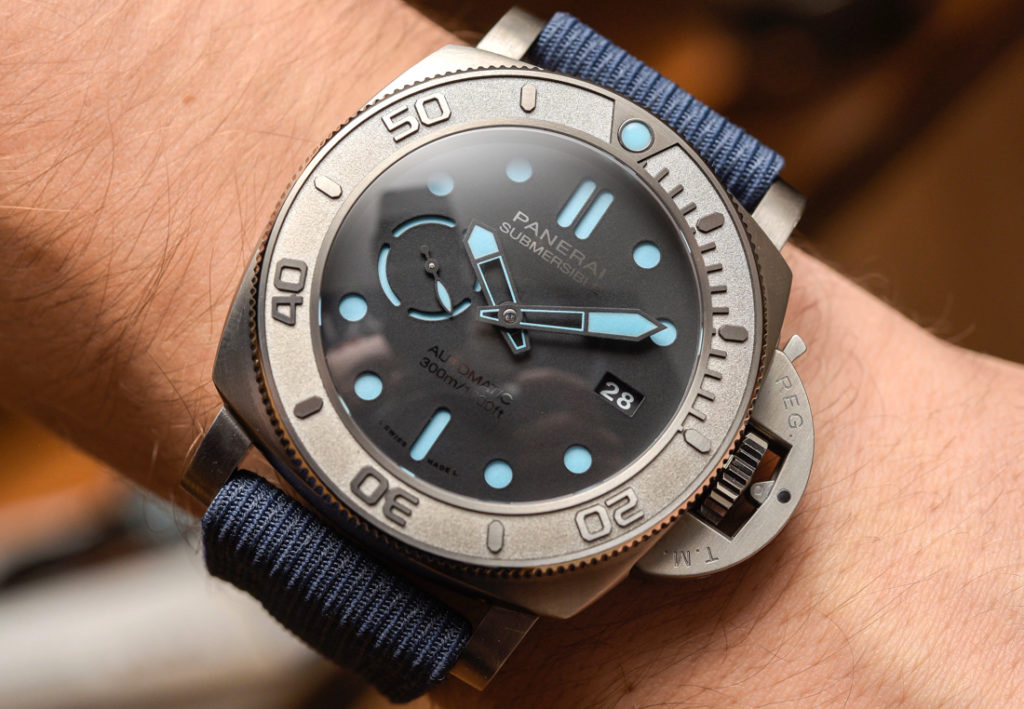 But unlike straps, which seem like low-hanging product fruit, I’ve long wondered who was going to bring a recycled alloy watch to the premium mass market, and though I’m a little surprised it was Panerai to be the first, let’s not forget that the brand has a long history of innovative case materials, like Carbotech (ultralight forged carbon composite), and BMG Tech (a highly shock-resistant bulk metallic glass). Unlike the aforementioned though, the EcoTitanium looks, feels, and wears just like a regular titanium Panerai watch. It’s very light on the wrist and has subtly warmer grey tones in its veneer. To give the EcoTitanium Submersibles their own unique visual identity, Panerai redesigned the handset and running seconds counter at 9:00, then stripped away the primary text on the dial, leaving only the deep, luminous cutouts to stand in stark relief. The Panerai wordmark and depth rating have been printed on the underside of the crystal, which, love it or hate it, is a pretty neat detail when viewed at an angle. The diving scale on the Submersible bezel is also fully engraved now with brushed surfaces and blasted texture within, hearkening the earliest watch Panerai created for Horn: the PAM186 Luminor Submersible Arktos GMT, with its raised compass relief. 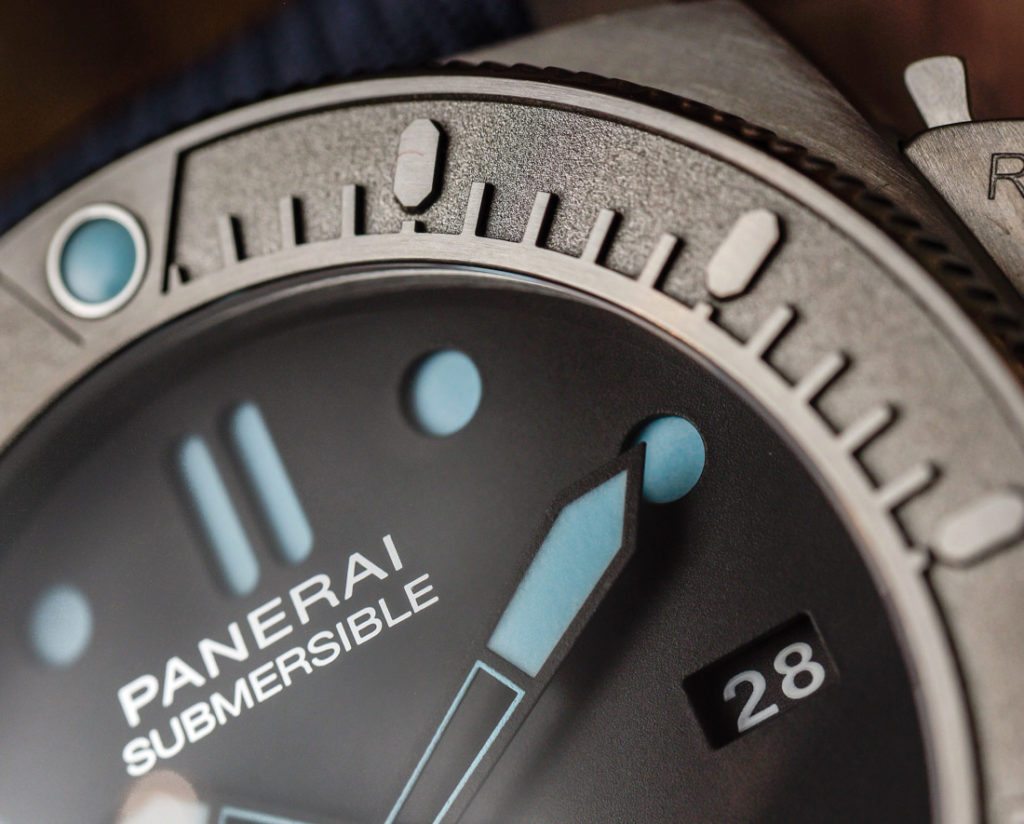 It’s a shame PAM985 isn’t also a GMT, but like the Marina Militare limited edition below, it is equipped with Panerai’s caliber P.9010: a 3-day automatic movement with a running seconds counter at 9:00. Speaking of the Marina Militare, the olive drab green and mottled black camo Carbotech case and dial on the PAM961 pay direct homage to the brand’s roots as a mid-century supplier of watches to the Italian Navy’s elite commandos prior to the second World War. This reference is more than homage from a design standpoint, though — its 33 new owners will get a chance to actually train with COMSUBIN (Comando Raggruppamento Subacquei e Incursori), an elite diving and commando group in the Italian Navy. Panerai wasn’t immediately clear on what a training day with COMSUBIN actually entails — seems like you’ll need to kick in the watch’s $41,000 asking price to find out. 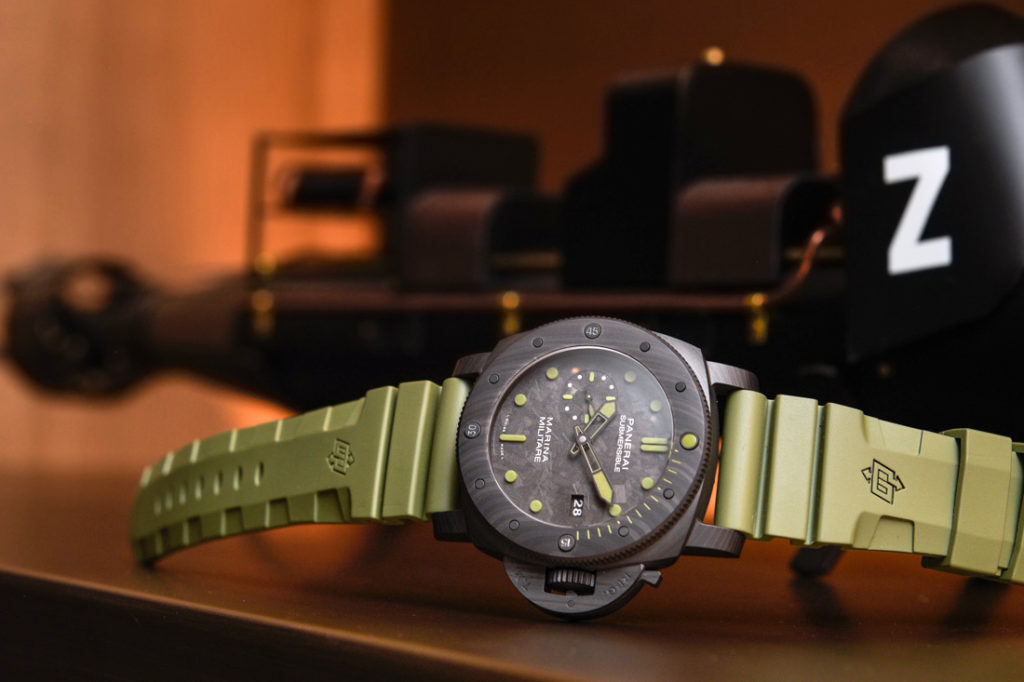 Despite its broad 47mm dimensions, PAM961 felt the most wearable of the three, thanks in part to its super-matte aesthetic and feathery-light presence on the wrist. It deploys the new Submersible handset found on the Mike Horn, but utilizes a brand new luminous applicant for Panerai: three-dimensional Super-LumiNova blocks, cut into the circular and hyphen-shaped hour markers that characterize a Submersible dial. It was also my favorite of the three watches, purely from a visual standpoint — not sure how I feel about dressing up and playing soldier, though I have no doubt that Panerai expects it to be the most popular of the trio, given its more “generous” allocation of 33 units. 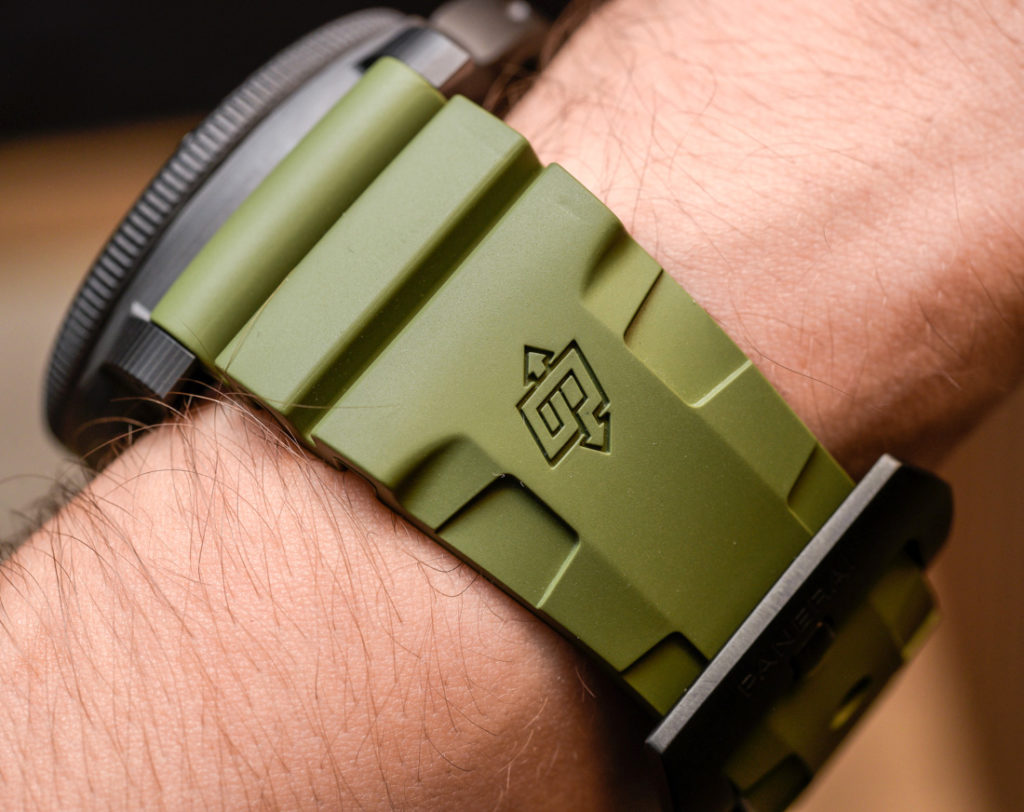 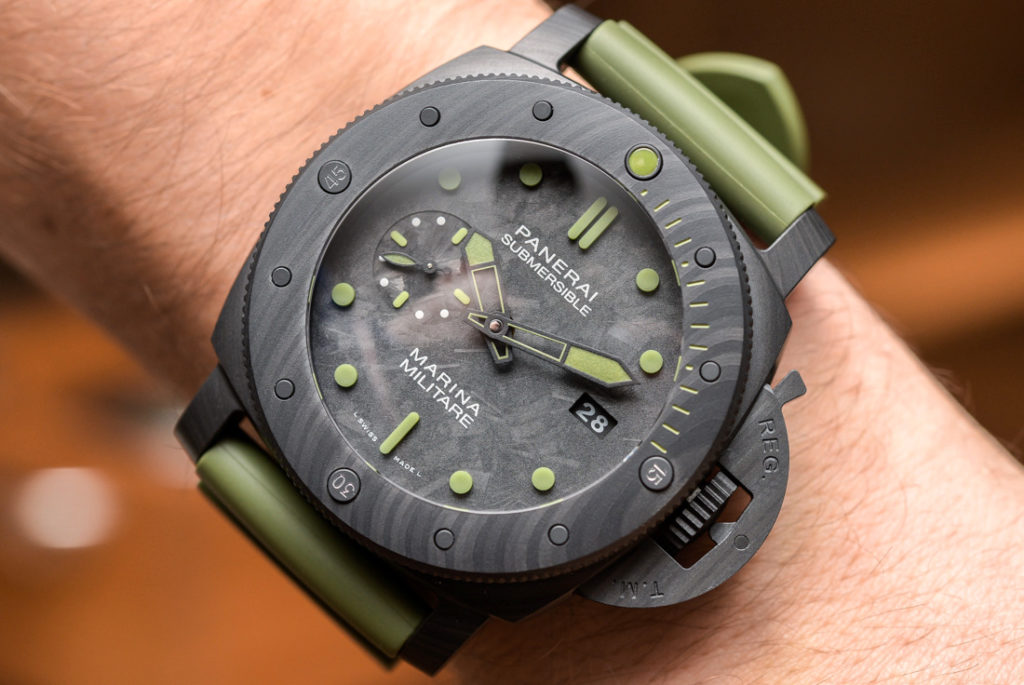 From a design standpoint, the third watch in the series is the most limited, but perhaps the least inspired of the three. Thankfully, it’s no less interesting, as it is tied to a freediving excursion with a world champion in remote French Polynesia. Though nearly double in price at $40,000 (of course due to the addition of the experience), the new reference PAM983 is essentially a blacked-out PAM982, which you might remember as this gray-dialed flyback dive chronograph designed exclusively for Guillaume Néry back in 2018. Now, if it were between the two, I’d personally rather have the earlier Néry version with its cool mottled gray “shark” skin dial and bright blue ceramic bezel. 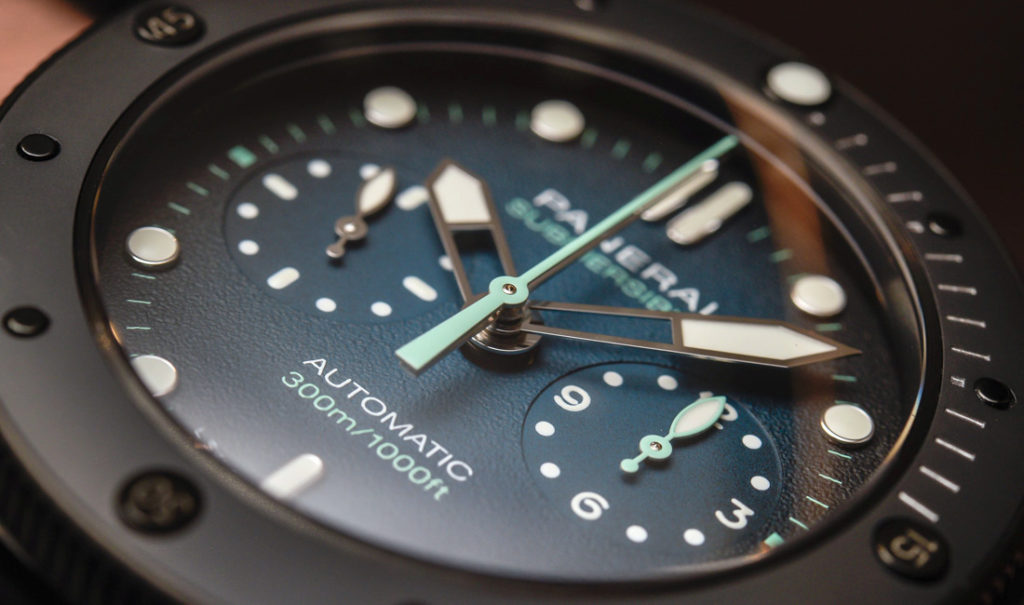 But physically speaking, the new reference utilizes the same 47mm titanium Submersible case, the same ceramic rotating bezel, and the same P.9100 flyback chronograph movement with the same dial layout. However, the super-limited “experience” version introduces three cosmetic differences (and tosses in a plane ticket to the South Pacific) and some serious exclusivity that could appeal to fifteen well-heeled customers. This version gets a matte black DLC coating, a textured blue degradé dial, and seafoam green colored accents and hands — a color scheme said to be inspired by the ocean around French Polynesia, where Néry now calls home much of the year. 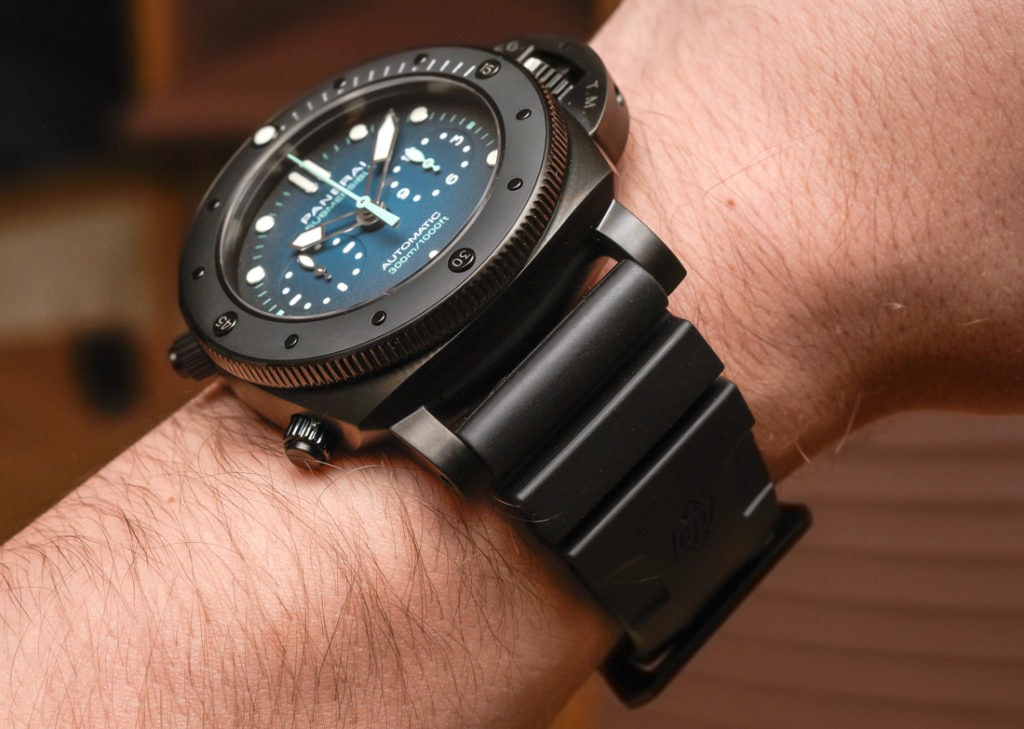 I had a chance to chat with the soft-spoken Néry over the prospect of hosting 15 Panerai collectors at his favorite training grounds in Mo’orea this fall, and he seemed to be just as enamored of the opportunity to have a new global platform to bring the sport of freediving to a new audience, as Panerai is to have access to him for this type of exclusive event. It’s no surprise, really — Néry has long been a gracious champion of the sport in and out of the water, using his platform and creative vision with underwater film to inspire and bring freediving to new audiences. (Be sure to check out his latest video short, the gobsmacking One Breath Around the World, as well as educate viewers on the ongoing plight of the oceans.) 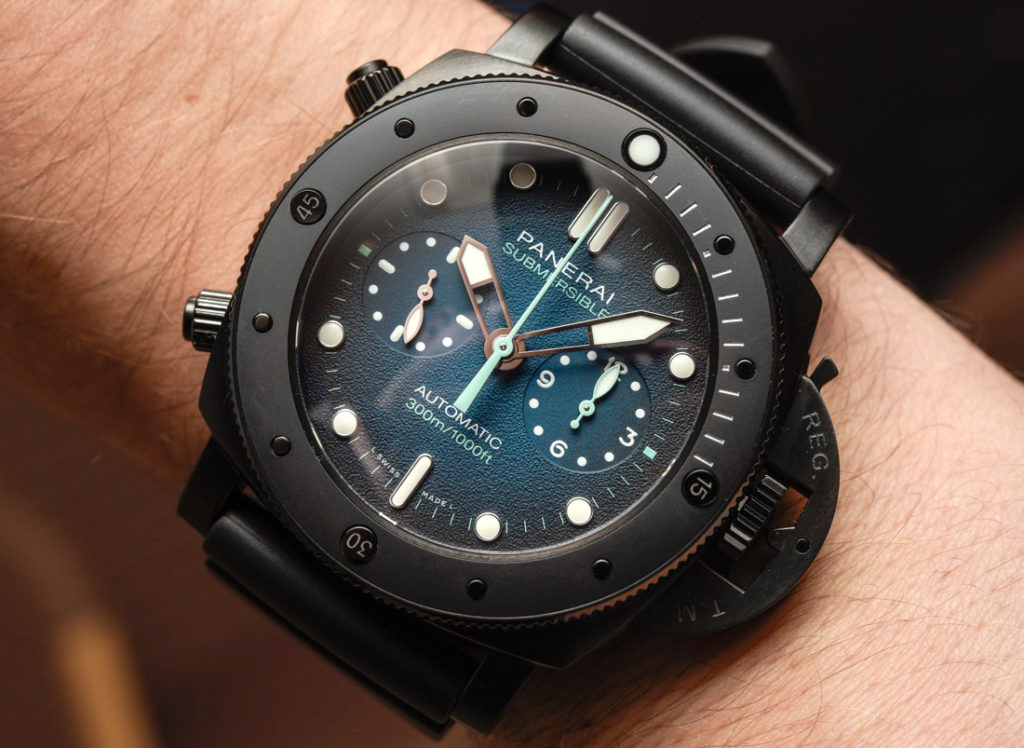 All things considered, the collection as a whole is a savvy move, and marks a relatively new direction for Panerai, and a line in the sand for Jean-Marc Pontroué. Granted, the price of around $40,000 for each of these watches is far from accessible, but it’s certainly a step toward bringing more exclusive events and interesting experiences to the watch community. Learn more about Panerai’s Submersible dive watch line at panerai.com.