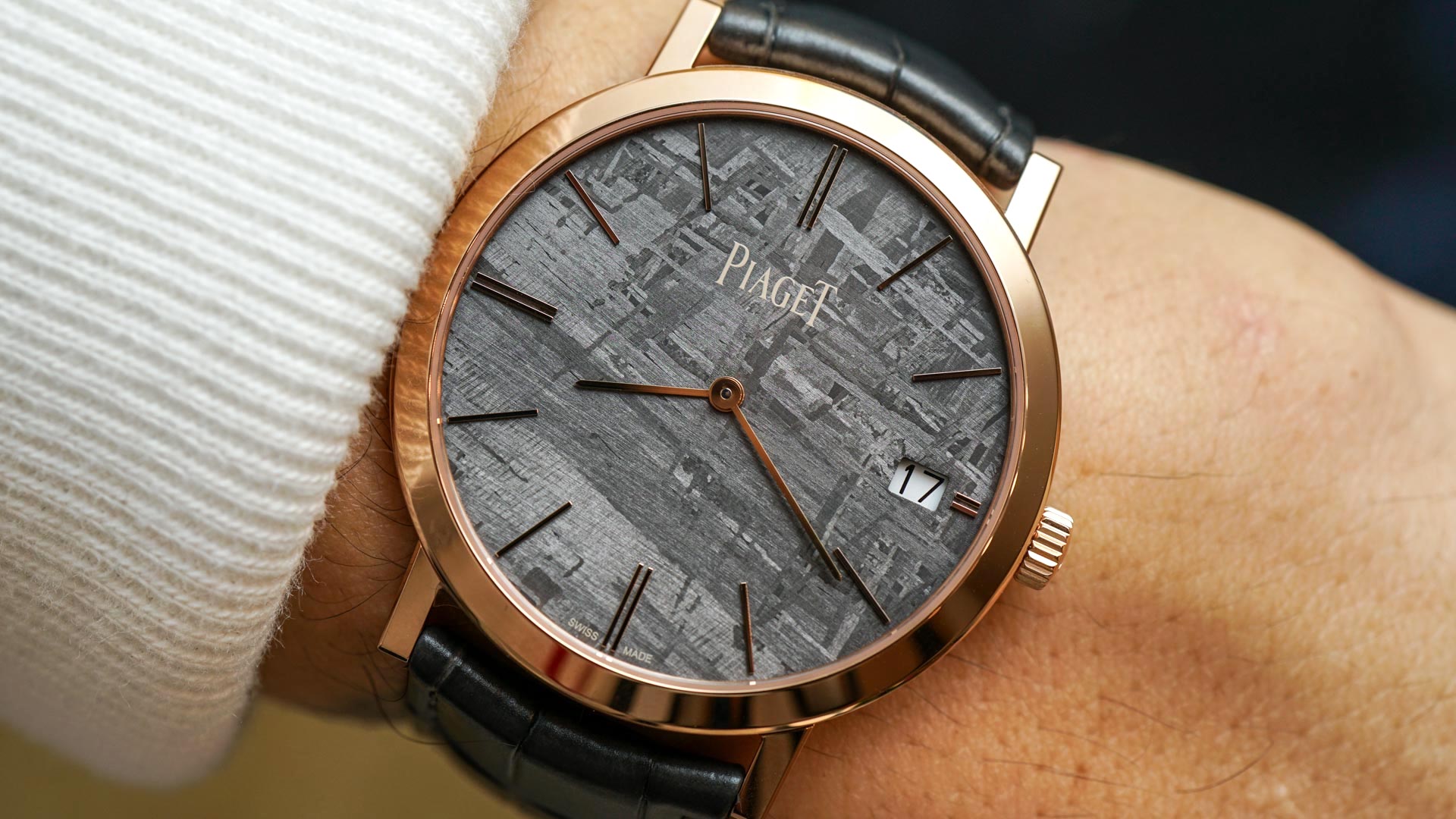 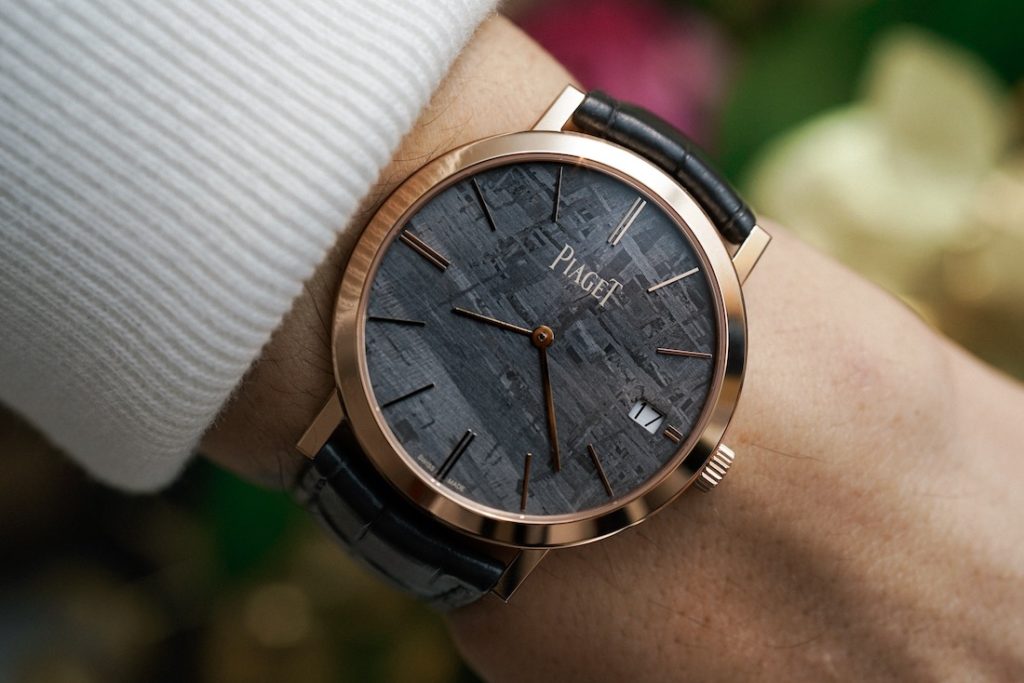 I can’t help but suspect that a great many disposable fashion brands of this era have, at some point or other, specifically referenced the Piaget Altiplano in hopes of replicating its whisper-thin silhouette, clinical modern minimalism, and all-knowing warmth that comes only from the confidence of one who’s informed entire manuals on mid-century European style. The Altiplano makes modern luxury look easy, but few (if any) of its many copycats manage to fully replicate the feeling of actually wearing an Altiplano. Comparison with anything less is obviously a waste of keystrokes — though I’d imagine it’s like sticking your arm in J. Crew immediately after you’ve spent a day in Tom Ford or Armani, but that’s besides the point. In its more classic trappings — the white dial and white-gold case — the tuxedoed Altiplano can feel a bit too stoic for everyday wear, however. But the new Meteorite dial and ultra-thin rose-gold case, introduced at SIHH 2019, write a whole new chapter for this iconic dress watch. 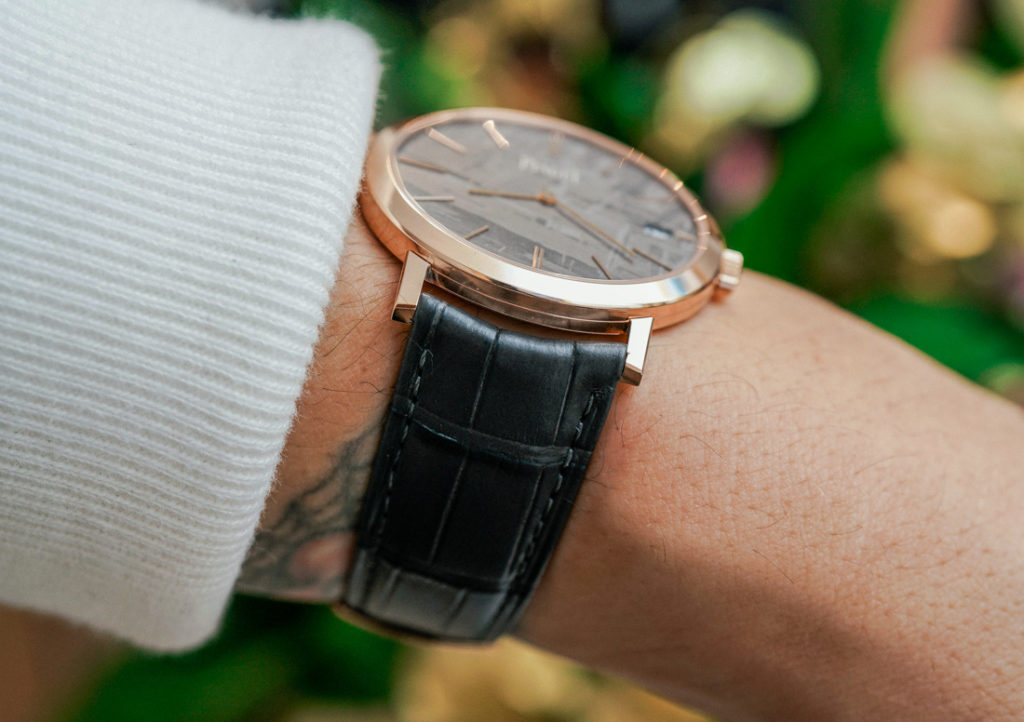 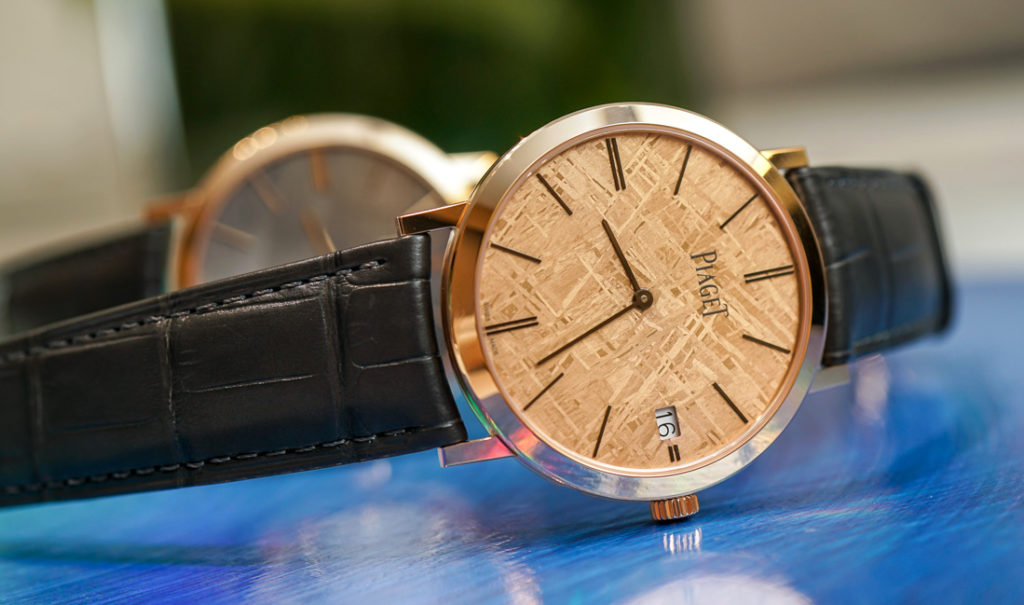 I’ll make no effort to hide the fact that the Altiplano Meteorite was my favorite watch of SIHH this year. Simply said, I put it on, and I felt feelings. I say that, despite the fact that this particular reference houses one of the show’s more objectively frustrating design choices: a contrasting date aperture punched out of its semi-precious stone dial. Even more baffling is how this particular Altiplano is essentially a time-only reference that accommodates a date, but no running seconds. Now, where exactly in the complication hierarchy does a date take precedence over running seconds? As far as I can tell, Piaget’s only current crop of Altiplano watches with a date are presented with a small seconds subdial. Granted, the more uncommon time/date combination found on the Meteorite reference actually follows the design codes of several older time-only Altiplano references with a date — including the more recent 60th Anniversary pieces —  but at least the latter had the decency to give the date a precious-metal frame. 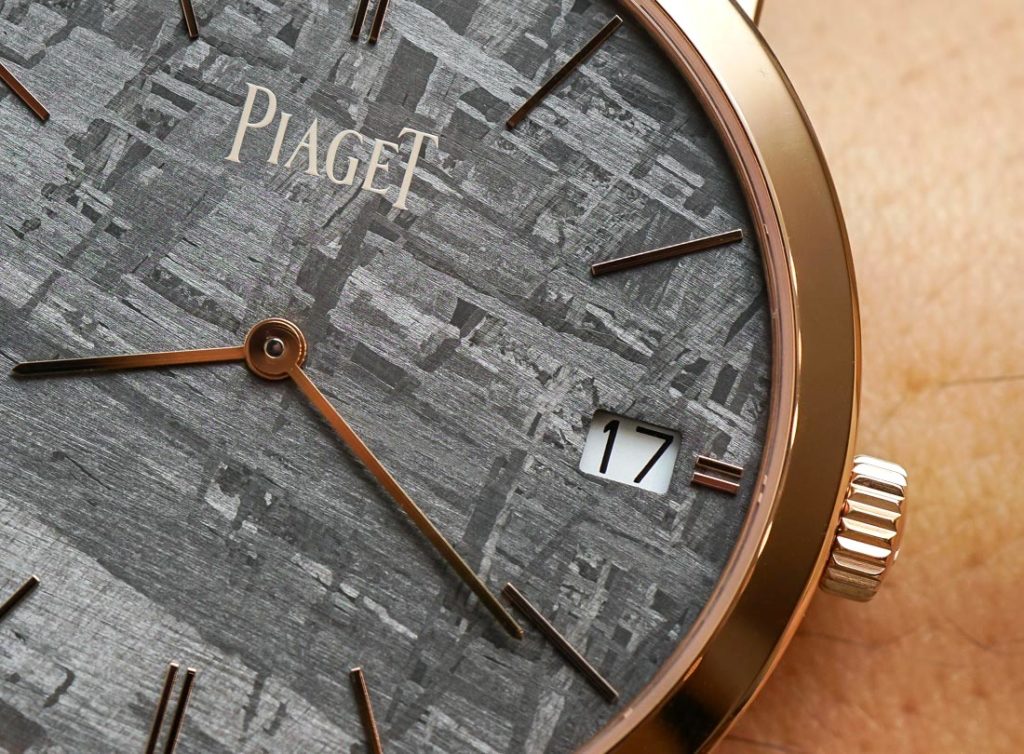 Now, I’m rarely one to criticize a date — it’s handy enough in a pinch and, when incorporated with intent (and without apology), can actually add to a dial’s character and design language, rather than detract from it. In this case, I’d argue that full omission would have been ideal, giving the meteorite total reign to shine on what’s otherwise a perfect rose-gold stage. But since time-only obviously wasn’t in the cards here, a close second alternative would have been color-matching the date wheel or the application of a rose-gold frame to match the applied baton indices. This would have signaled that designers were fully committing to the addition of a date and weren’t totally asleep at the wheel when it came time to finish the damned thing. 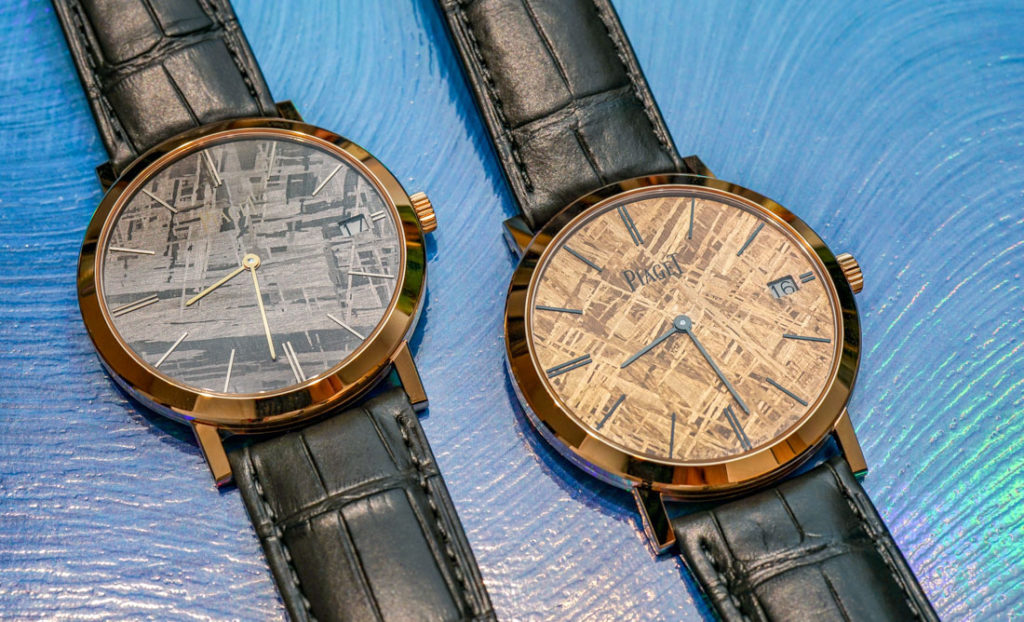 But anyway, back to my still-favorite watch of the show. We were presented with two meteorite dial options: one in gray, and one in a tonal rose gold to match its case surround. Historically speaking, Piaget’s signature mid-century minimalist dial designs like those found on the Altiplano (or as it was once called, the “Thin-Matic”) have always been the perfect canvas for semi-precious stones — another longstanding brand signature. Stones like malachite, lapis, jade, ruby, and turquoise have all made repeated rounds over the years, as has meteorite, most recently in 2017’s dead-sexy ‘Vintage Inspiration’ art piece, with its cool stepped-edge case. 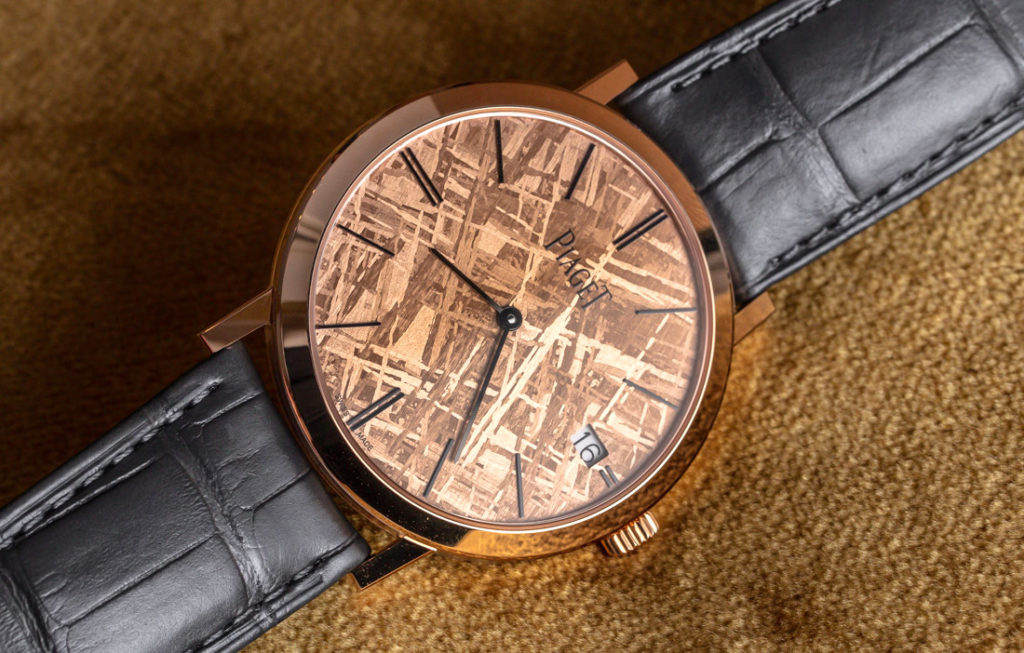 One thing I love about meteorite in these contexts is that, in the lexicon of precious stones, it carries a distinctly masculine appeal, due to the semi-matte, fractal appearance, which gets its distinct personality from the dispersion of iron crystals that intersect at chaotic right angles, forming the stone’s unique aesthetic when cross-sectioned. Plus, the stone’s mysterious extraterrestrial origins can’t be ignored, making it perfect for the occasional space-watch tie-in, like 2010’s super-rare Omega Speedmaster Soyuz Apollo Edition, or the more recent Speedmaster Ceramic Grey Side of the Moon. 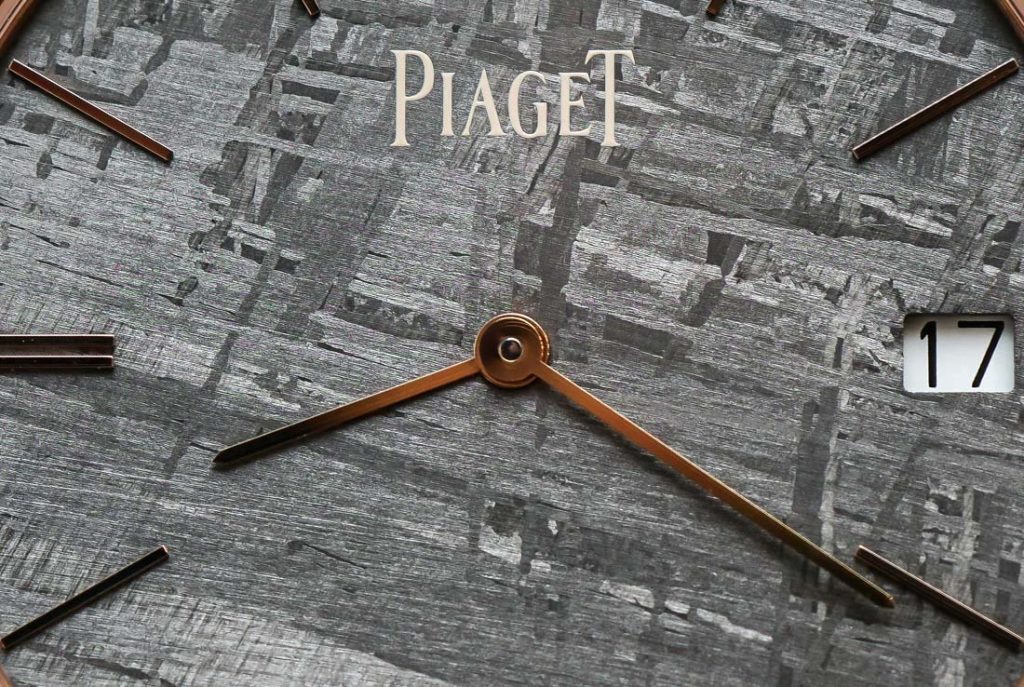 Like this new Altiplano, the aforementioned Speedmasters — particularly the newer ceramic variant with its marriage of meteorite and Sedna gold — are a perfect example of how a striking masculine aesthetic can be achieved in a high-end product using precious materials, even in what would otherwise be the super-traditional dressy watch trappings of the Ultra-Thin Altiplano. Even better is how Piaget’s rose gold has a warmer, masculine bronze tone (contrary to many more “pink” rose gold hues) that perfectly contrasts the steely fractured texture and shifting iridescence of the meteorite stone. Even with a razor-thin 6.5mm profile and its all-dial 40mm case diameter, the Meteorite Altiplano still gave off a sultry, modern undertone that didn’t quite feel like it needed a monochromatic three-piece suit to be fully enjoyed. In fact, I think this watch begs to be more than just a stuffy black-tie accessory — it could, instead, be the centerpiece worn under more casual pretenses: with a sporty, unstructured blazer, revealed under the rolled-up sleeves of a cashmere sweater, or even paired with a black denim jacket and leather boots for the truly daring. 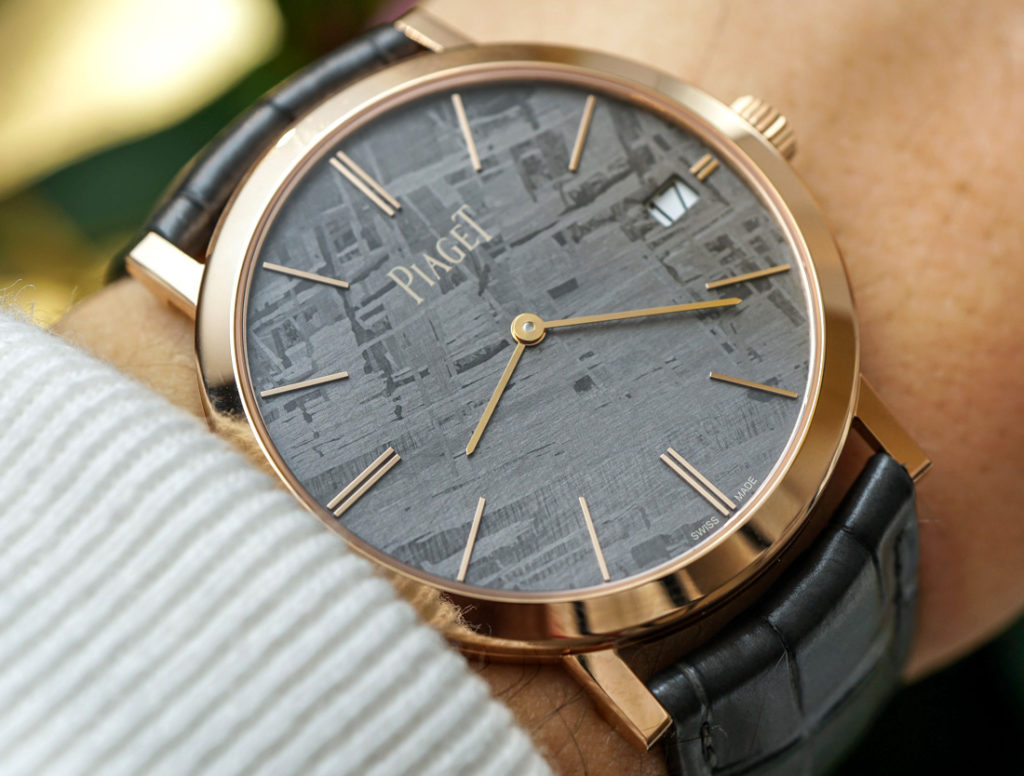 Plenty’s already been said about Piaget’s incredible prowess in the ultra-thin movement manufacturing realm, so don’t expect any surprises here. The 1230P is an automatic-winding caliber with 44 hours of power reserve, and measures only 3mm-thick, thanks to an off-centered micro-rotor. This particular movement variant has that much-maligned date, but falls in the 1200-series of movements, which were introduced in 2010 as a successor to the legendary 12P ultra-thin movement that more or less dominated the ultra-thin competitive landscape for the better part of the 20th century. 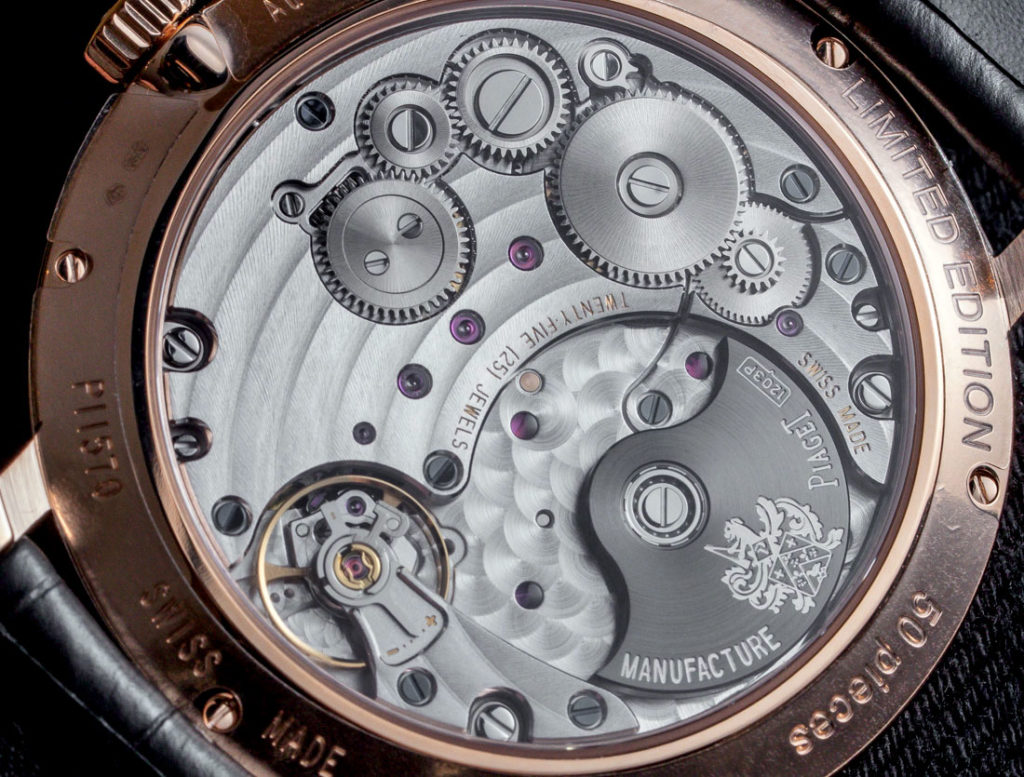 As the continued (ahem) meteoric rise of sport utility and business-casual in the watch world spells inevitable doom for the dress watch of yesteryear, it’s refreshing to see this stuffy sartorial staple finding new ways to turn heads and make a compelling case for taking casual to the next level — even if it takes precious metals and a price of $24,600. Due to the relative rarity of meteorite, this new Altiplano will be limited to 300 pieces when it lands in Piaget boutiques later this summer. Head over to piaget.com for more information on this, and other novelties from SIHH 2019.