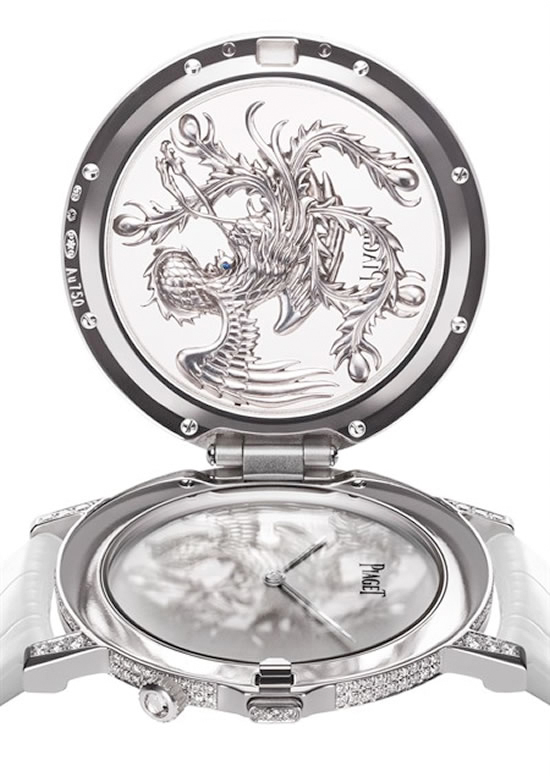 This range of photos doesn’t even describe all the Piaget Dragon watches that will exist. If you look at them closely, you’ll notice something they mostly have in common. A lot of diamonds and tourbillons. Yup. Piaget knows how important symbolism is to many Chinese consumers and is making sure that their sexiest creations are imbued with the power of mythical reptilians.

Some of these creations are one-of-a-kind beauties, such as the fully diamond covered Dragon Bestiary Secret watch. For dragon ladies only. That one is likely to be a bit over the top for most people, but you get the idea of how serious Piaget wants people to take its dragon-themed timepieces. My favorite is the Piaget Polo Tourbillon Relatif Dragon watch. The version of the Polo Tourbillon Relatif engraves Asiatic dragons on the case side with a diamond covered crown. The dial side has a dragon done in relief and more diamonds. It isn’t a new watch, but likely to be a hit among collectors.

Also impressive are the Piaget Emperador XL Flying Tourbillon Dragon watches. There are 18k rose gold and white gold versions – with and without diamonds. These are going to be extremely pricey timepieces due to the tourbillon complications and the massive amount of diamonds. In addition to the tourbillon models Piaget will offer slightly more reasonable Piaget Emperador Dragon models. These have more simple Piaget made automatic movements and just the time. There will also be diamonds and non-diamond versions.

Each of the Emperador models have the slick looking wrapping dragons in relief. The dragons on all versions have diamonds. Piaget did a good job making them look impressive without looking silly or overdone. You’ll also notice that Piaget was still able to get in a figure eight to satisfy Chinese love of lucky number 8. What amuses me is that Piaget really tries to pack the luxury in on these models. The Emperador XL Flying Tourbillon Dragon watch even has a caseback that is mostly covered with diamonds.

Even women get a model (aside from the Dragon Bestiary secret watch). There is a Limelight Twice Dragon watch – but this one really only has a Chinese character on it. The most simple model is likely the Piaget Altiplano Dragon watches. This will be in a 38mm white 18k white gold case with a diamond bezel. The elegant simple Altiplano dial has nice looking dragon outline on the dial.

Possibly the most unique Dragon watches for collectors are going to be the fully decorated Piaget Protocole XXL Dragon watch with a dial and bezel that has one continuous dragon motif. On this pieces the dragon seems to be holding some type of diamond covered basket ball or something. There will also be interesting Altiplano Tourbillon Dragon Pocket watch. Likely a favorite among the style-conscious, the pocket watch will have a square case and tourbillon movement. On the dial side will just be a Chinese character for dragon and the tourbillon window. The bezel will be lined with two rows of diamonds. Turn the pocket watch over and you’ll see a fully details caseback painted in grand feu enamel of a dragon cupping the tourbillon. Each of the above watches are in 18k rose or white gold and most models have diamonds (all of the pictured ones do). This is going to be an interesting year at Piaget boutiques and retailers in China.