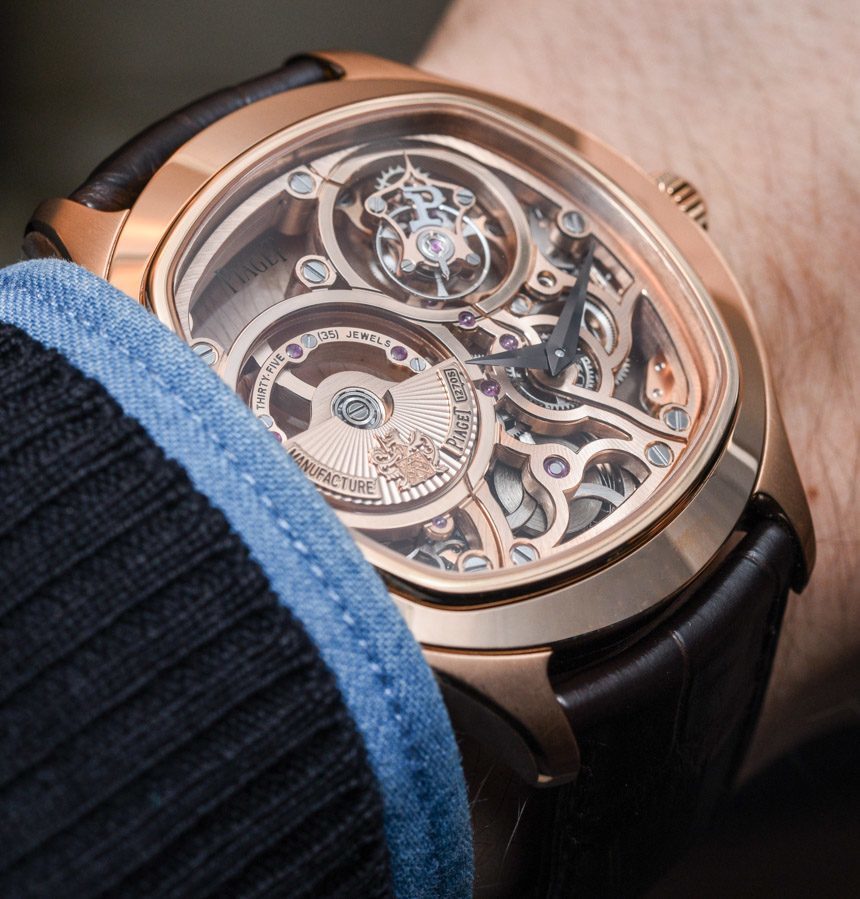 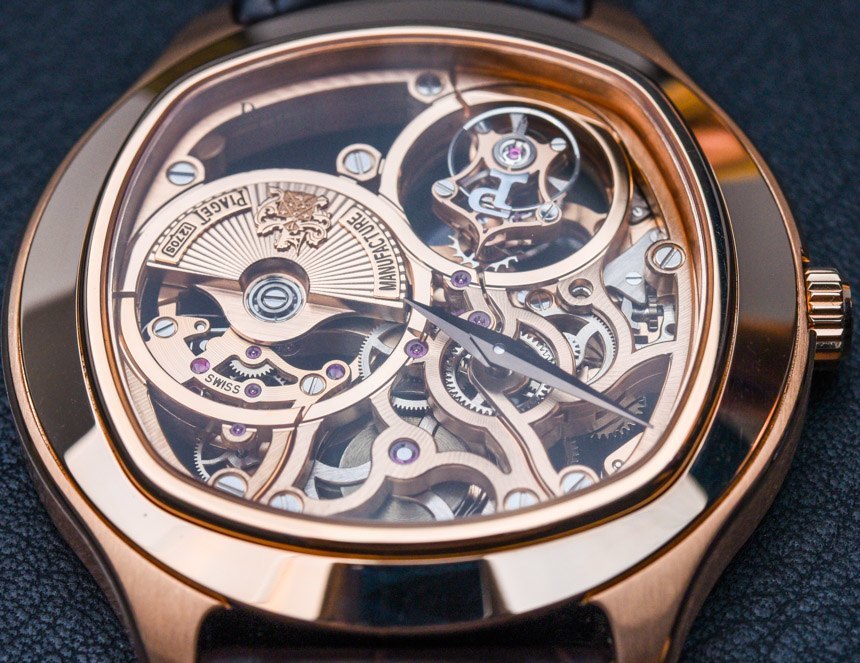 Outside of the decently well-selling Altiplano collection, it does not always appear that Piaget has a specific strategy when it comes to their men’s watches. In fact, if there was one really nice high-end brand that produced their own movements inside of the Richemont Group that might benefit from a bit of an image injection on the men’s side, it is Piaget – at least in my opinion. That doesn’t mean Piaget isn’t still making some really nice watches, it just takes a bit of time (and money) to enjoy and learn about them. Take, for example, this very lovely and quite ritzy Piaget Emperador Cushion Tourbillon Automatic Skeleton watch. 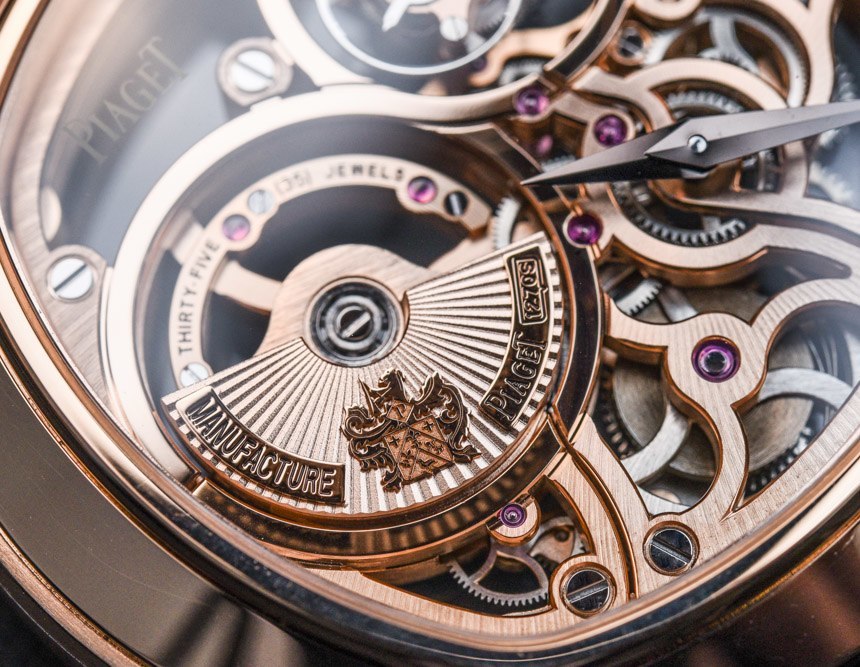 At least, that is the name I’ve given the watch. Piaget’s website doesn’t even give the watch a name that sounds right outside of the reference numbers (there is an 18k rose gold and 18k white gold version). An interesting note is that the movement inside of the 18k rose gold version is actually in 18k rose gold (the white gold-cased model does not have a gold movement). So, according to Piaget, this is the “Piaget Emperador tourbillon skeleton cushion-shaped watch,” which doesn’t sound very strong. To a degree, I understand the issue because this is essentially a cosmetic upgrade to a very similar watch from 2011. Back then, we went hands-on with the Piaget Emperador Coussin Tourbillon Automatic Ultra-Thin here. Each uses a 1270-family movement, with the previous 2011 watch using an in-house-made caliber 1207P, while this new 2015 version uses the caliber 1207S. What’s different? Only the skeletonization style – but that makes it look really different. 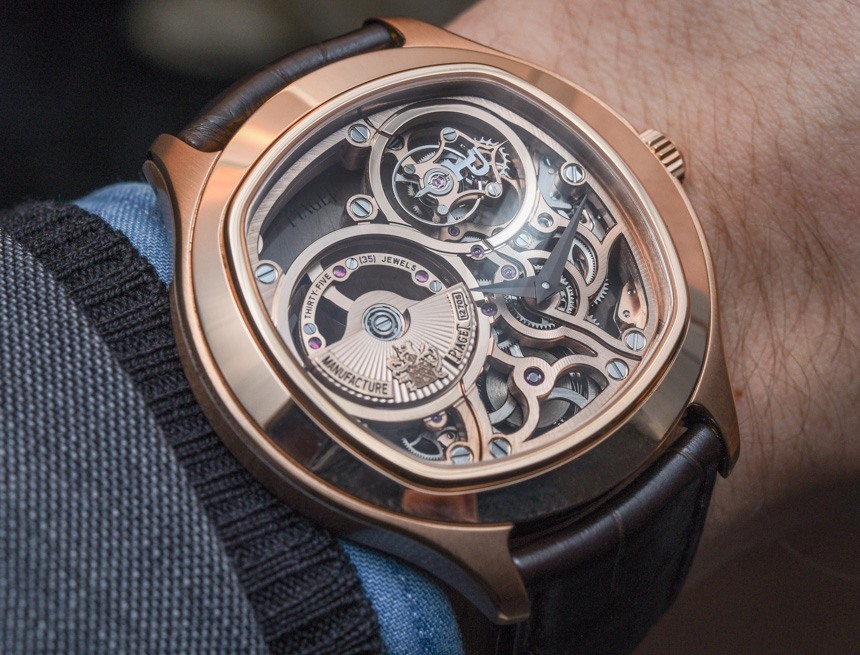 Off the wrist, the Piaget Emperador Cushion Tourbillon Automatic Skeleton case is interesting and often attractive (depending on your perspective). On the wrist, it really depends on how thick your arms are. At 46.5mm wide, this is a nicely bold watch, but one that will look a bit silly on smaller wrists. On the correct wrists, there is certainly a handsome regality to the graceful curves and obvious distinct aesthetic elements. 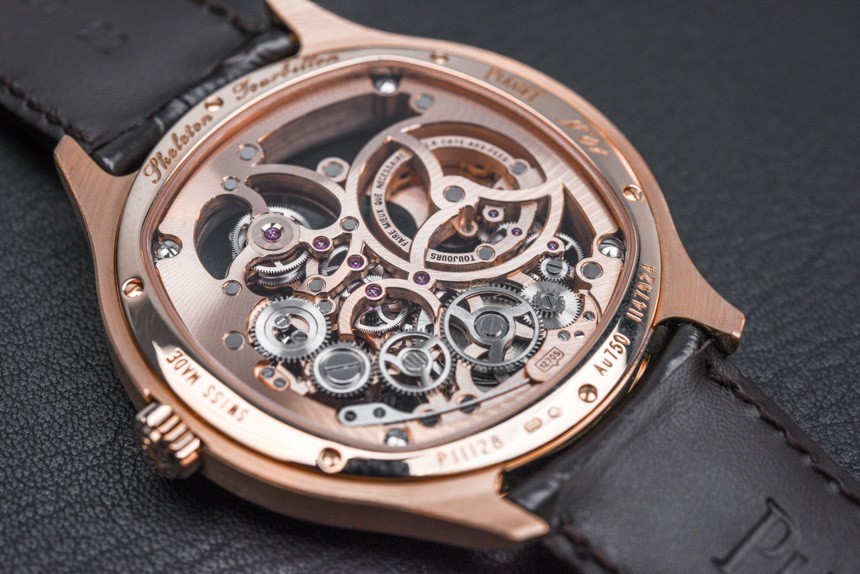 Even though the Piaget Emperador Cushion Tourbillon Automatic Skeleton case is interesting, the main attraction here is the movement. When the 1270 originally came out, it was the world’s thinnest automatic tourbillon caliber. It might now still hold the record if you further refine the definition to the “thinnest automatic tourbillon skeleton movement.” The 1270S is 5.05mm thick, but other watches have thinner automatic tourbillons by this point. For example, the Parmigiani Tonda 1950 Tourbillon which is also an automatic with a movement that is just 3.4mm thick… but of course, it is not skeletonized (yet). The Piaget Emperador Cushion Tourbillon Automatic Skeleton case is 8.85mm thick. That isn’t as insanely thin as some other Piaget watches (such as the Altiplano 900P), but for a case like this and movement like this, it ain’t half bad. 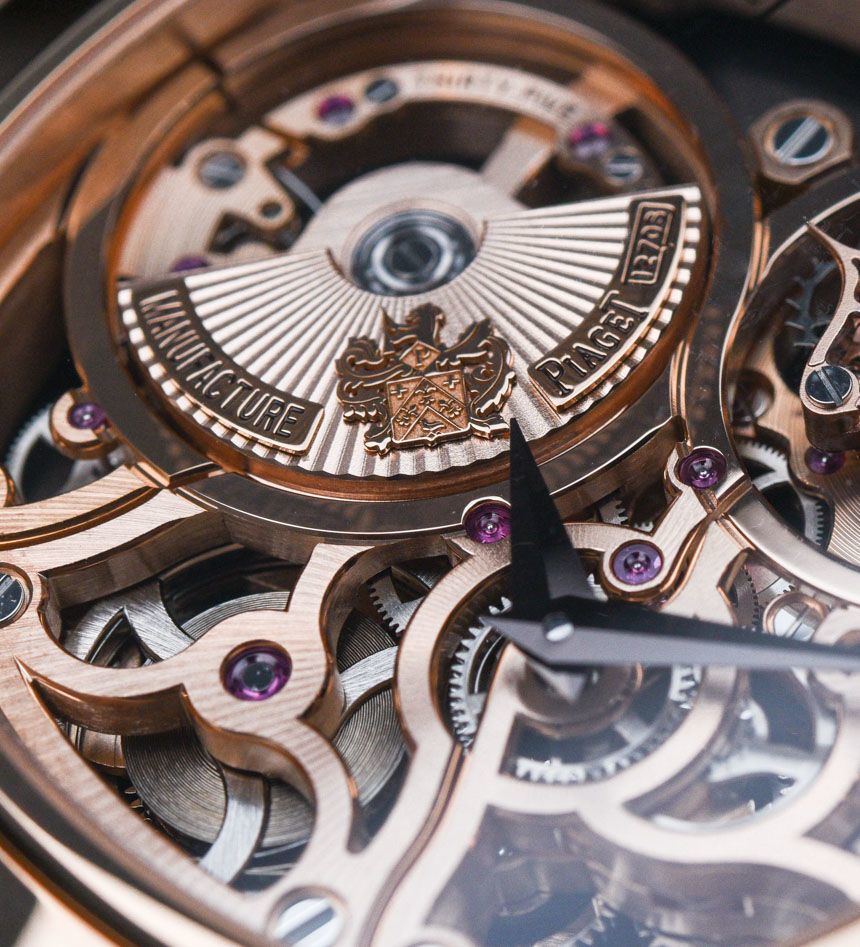 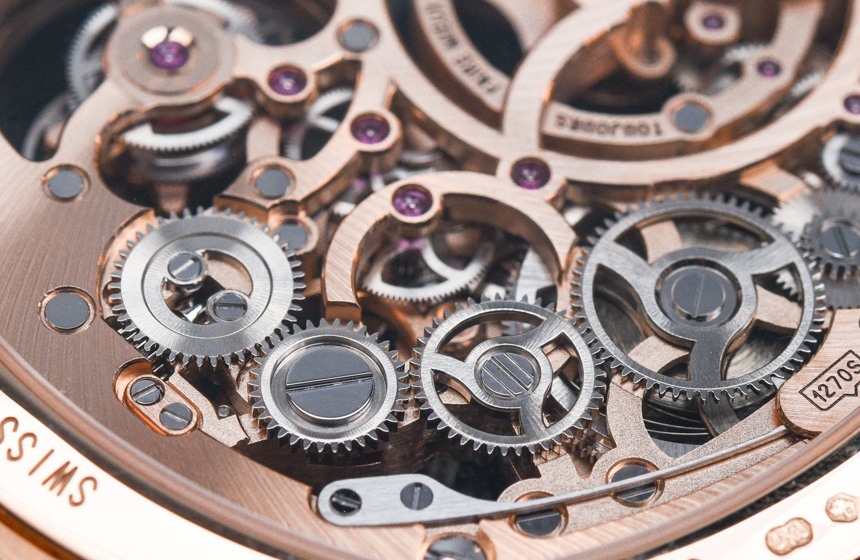 The caliber 1270S is a fine-looking mechanism designed to be wide and thin. Piaget’s engineering strategy was to separate all the elements horizontally rather than vertically stack them. Thus, on more or less the same plane you have areas for the tourbillon, automatic micro-rotor, and a small dial to indicate the time. An added benefit, of course, is that the wearer can easily view each of these areas at the same time. I believe that the previous 1270P version actually has a power reserve indicator as well on the rear of the movement – which does not appear to be part of the 1270S. 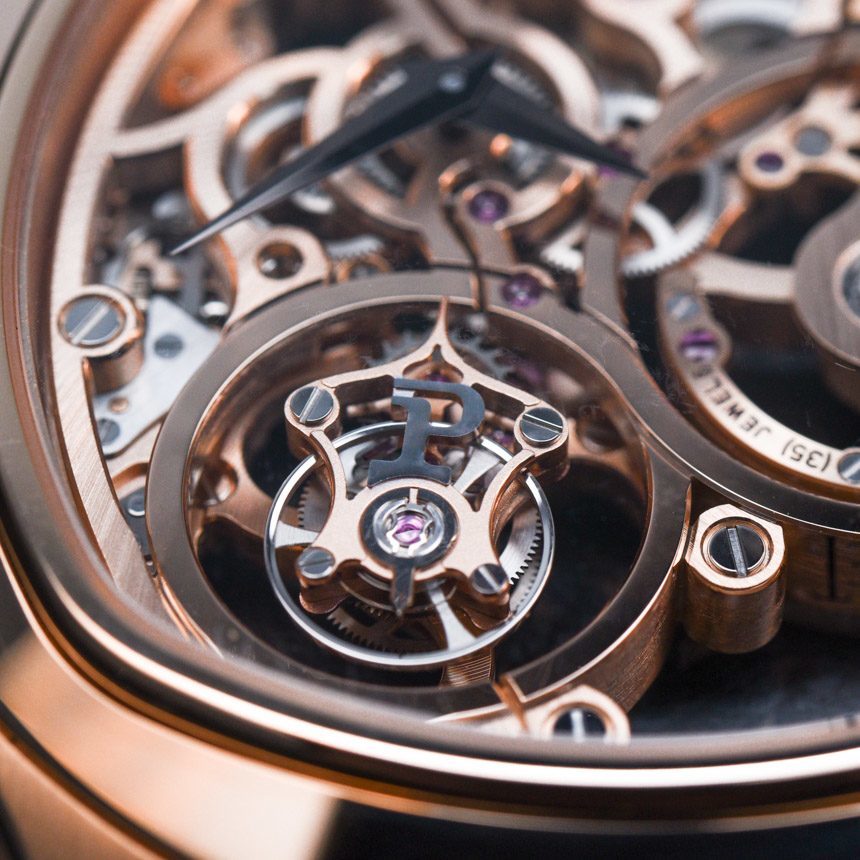 With that said, the dial execution of the 1270S is indeed very nice, and the skeletonization job is very attractive. Even though there are two black dauphine hands to read the time, there isn’t even an hour marker scale, so please try not to form high hopes for legibility in a timepiece such as this. 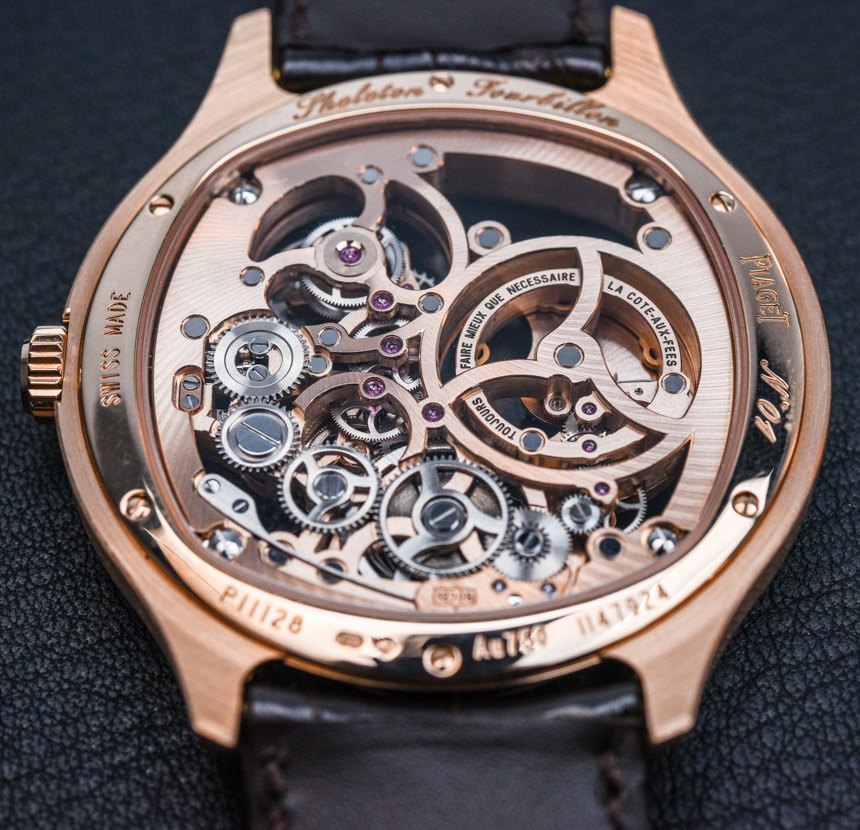 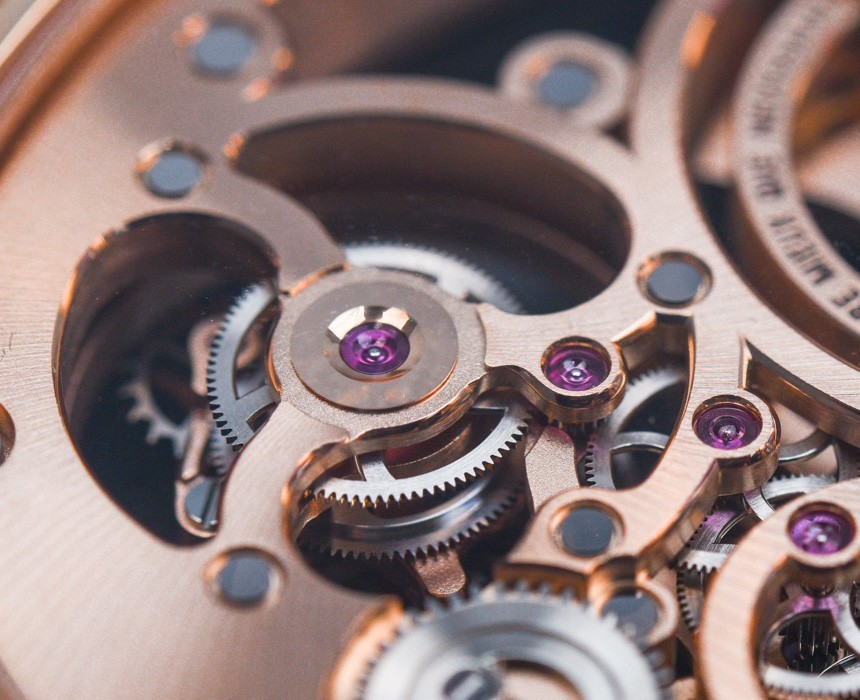 The 1270S movement is made from 225 parts, operating at 3Hz (21,600 bph), and power reserve is about 42 hours. The skeletonization and finishing is an elegant mixture of modern techniques and traditional aesthetics. Piaget designed it to really focus on the curves of the bridges while applying a brushed finishing to the bridges with some light beveling. Its all quite nice. How do you feel about the rather prominent Seal of Geneva logo on the micro-rotor? Also note the Piaget “P” on the cage of the flying tourbillon. Oh, and depending on the model, the micro-rotor is black-coated platinum or rose gold. Again, the movement in the 18k rose gold model has a matching rose gold material movement. 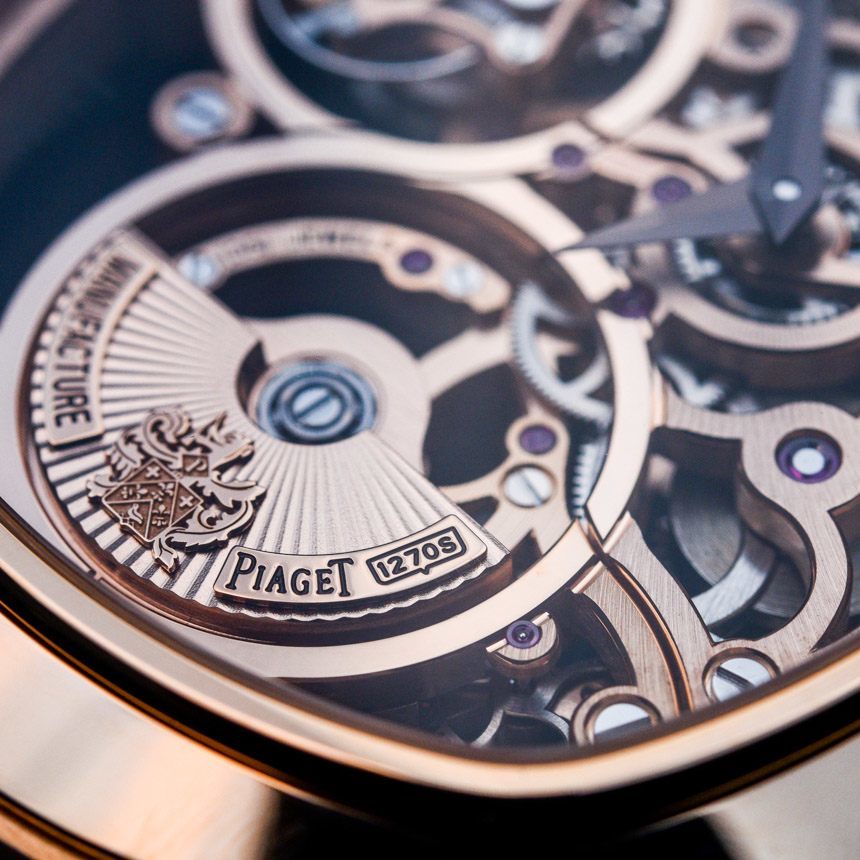 While the Piaget Emperador Cushion Tourbillon Automatic Skeleton is mostly an elegant watch, it is also very much a “showy” watch designed to display the case, movement, and high-end finishing. In my opinion, this is often where Piaget is the most comfortable. I just feel that they need to develop a bit more personality for these watch families on a higher level so that collectors have built in perceptions and feelings when seeing these watches as opposed to trying to understand each of them from scratch with each new release.