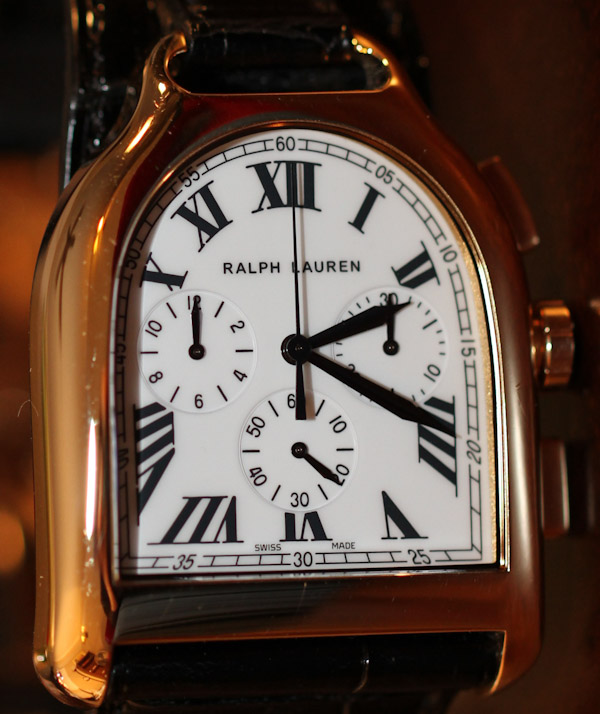 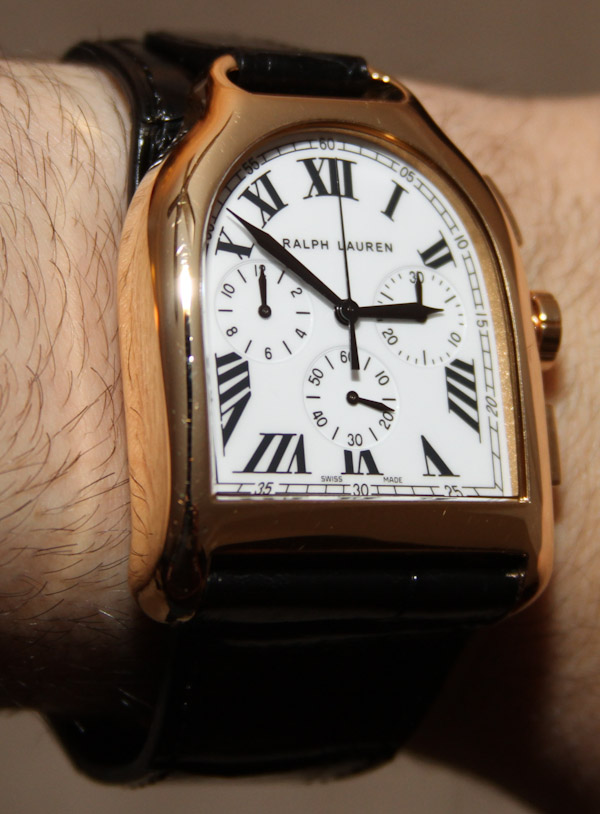 This bell-shaped watch is the Stirrup by Ralph Lauren. Equestrians now have another timepiece dedicated to their hobby. No longer can brands like Piaget and Hermes share in most of the horse world spotlight. Ralph Lauren’s Polo sub-brand can’t be separated from the sport it is meant to honor, and I think a watch based on riding equipment and Ralph Lauren immediately makes sense, even though Mr. Lauren’s design and inspirational scope is much larger. The Ralph Lauren Watch Company is rather far removed from mainstream Polo shirts available at Macy’s. Ralph Lauren has an impressive higher-end division, with the watches being a sort of thematic diamond sitting on top of the heap.

I remember a conversation I was included in several years ago. I believe it was late 2008 and a Richemont executive made a statement about the upcoming Ralph Lauren watch brand. Two other people there (also Richemont employees) sort of scoffed at the idea. Reasonably questioning the nature and purpose of the brand which was linked to the fashion empire. You see, watches made with fashion brand labels, aren’t always top quality or pedigree, even though they often charge top quality and pedigree prices. It was reasonable to be skeptical. 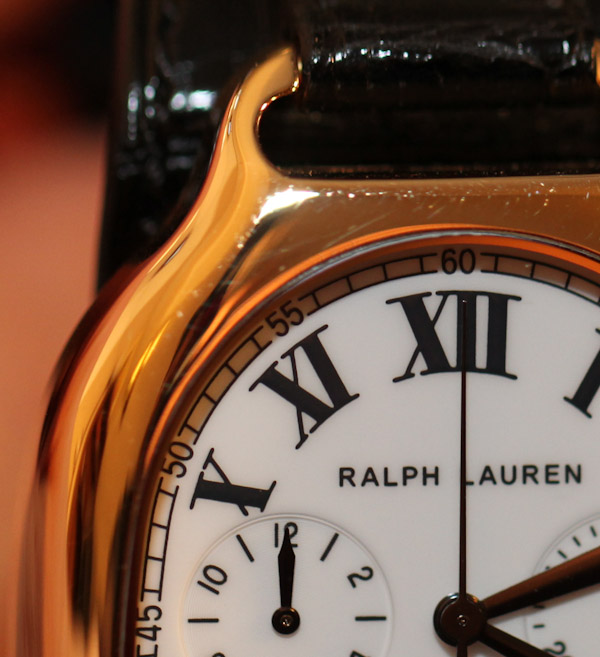 The Richemont executive countered almost slyly, pointing out that their hesitations about taking the upcoming brand less than seriously might not be merited. Having no stake in the new brand, they nodded their head seriously and mentioned that the Ralph Lauren pieces would be serious watches. Everyone there seemed to be curious about how it would go.

I believe it was at SIHH 2009 where Ralph Lauren watches officially made their debut. I was there, and got a chance to see the seminal collection. The three main characters in the new horological drama were the Sporting, Slim Classic, and the Stirrup. The first two easily had the most mainstream appeal, while the Stirrup was to be Ralph Lauren’s most distinct product, and hopefully a new visual trademark for the fresh brand. It came in versions for both men and women, with some of the latter being particularly poised and high-end jewelry pieces. One thing that always stuck out a lot to me, was the logo. “Ralph Lauren” was spelled out cleanly and in an unpretentious manner. I thought that was clever, and made it look like a name that had been around much longer than it actually was. Taking away the matter of price, I am happy to say that overall, Ralph Lauren watches are relatively speaking, nice and unpretentious watches. That even applies to this solid 18k rose gold Stirrup large, with a slightly glossy bund-style alligator strap.

This “large” version of the Stirrup is 36.60mm wide by 38.50mm tall. It is also 12.15mm thick. Also available in steel, the case is finely rendered and well polished. This 18k rose gold version offers large areas of polish which greatly emphasizes the warmth of rose gold. You’ll notice that the strap connects differently on both ends of the watch, but it is designed so that underneath there is a flush surface for comfort. The strap is solid, but not overly thick. A charming detail is the buckle on the fold-over clasp, which mirrors the design of the case. The strap uses an 18k rose gold tension clasp which requires a firm push to get it to audibly click into place. While I tend to prefer locking or push-button deployant clasps, the buckle on the Stirrup does benefit from having a rather thin profile. It does remind me a lot of clasps I have seen on Cartier watches in the past. 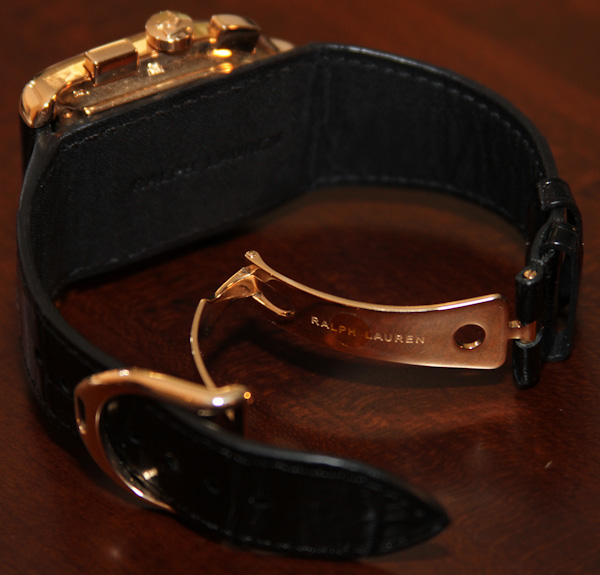 On the wrist the Stirrup large isn’t what I would call large, but rather medium-large. On my wrist it actually looks quite proportional, but I have small wrists. I think they should eventually offer one size larger for wide-wristed men who want to sport this unique design. I am not saying the watch is small, but you need to try it on for yourself – especially because the unusual shape of the case can be hard to visualize on your wrist without actually wearing it. I do appreciate how the tapered strap does help the case appear larger than it is.

If you look closely at the 18k rose gold and steel models, you’ll notice that Ralph Lauren designed them with slightly different dials. This Chronograph model has a white lacquered dial with all black hands and indexes. This results in pretty perfect contrast between what you want to read and the watch face. Still, the chronograph subdials are slight recessed, and even have a snailed texture if you look really closely. It isn’t hard to imagine where the dial style came from. Ralph Lauren himself made it clear each of the watches in his collection were based on things that inspired him. Going to a range of classic pieces with Roman numeral hour markers and sword-style hands, he was able to settle on something which is genuinely satisfying and familiar looking. The design ethos opted to take an unusual case design, and try to render it in a way that felt very natural – as though  this was a watch mimicking something you discovered in your wealthy uncle’s estate property. 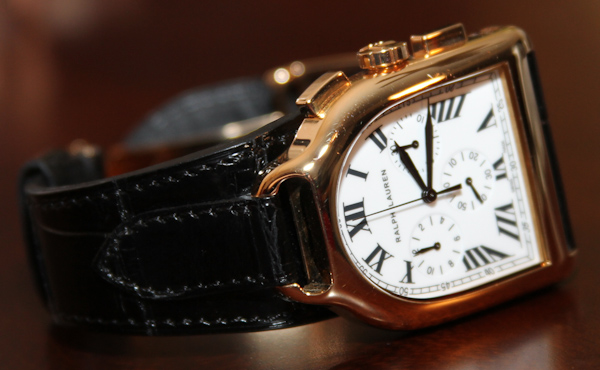 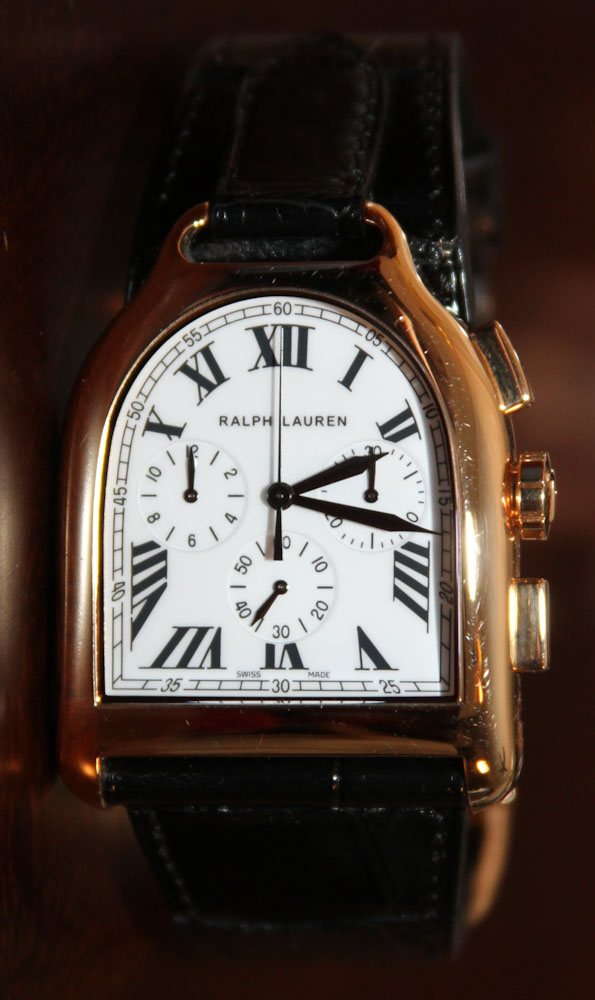 When Ralph Lauren watches were announced, it was immediately made clear that they would not be using their own movements, but rather proudly be using movements made for them by other brands in the Richemont Group. You see, Ralph Lauren watches is not inherently part of the Richemont Group, but rather made an agreement with them to produce watches together. Richemont owns a number of the world’s most successful high-end luxury watch brands, and it was a rather logical partner for the endeavor. Rather than try to reinvent the wheel, Ralph Lauren would take a very traditional approach to making watches by using movements from existing and respected watch movement makers. Some people thought this was strange, but they are forgetting their history.

The examples are countless, but a good example is with Piaget. The Ralph Lauren Slim Classic timepieces each use movements made by Piaget for Ralph Lauren. Piaget started as a watch movement maker. Selling their their products to others who would put them in their own cases. It was not until the 1940s I believe that there was ever a Piaget watch. Today Ralph Lauren recalls that tradition. They design the watch and then work with a respected high-end watch movement maker to outfit them with movements. It makes sense to me, and I appreciate the transparency. To be honest it even helps me feel more comfortable about the value proposition than if Ralph Lauren attempted to make their own movements.

Inside the Stirrup Chronograph is a movement produced by Swiss Jaeger-LeCoultre, called the caliber RL 750. This automatic caliber has the time and 12 hour chronograph with a 48 hour power reserve. Jaeger-LeCoultre makes watches and movements, and is a very well respected movement maker. It should be seen as a benefit to have this movement in the watch. As of now, the most complex movements in Ralph Lauren watches are produced by Jaeger-LeCoultre. Piaget and IWC make the other ones. 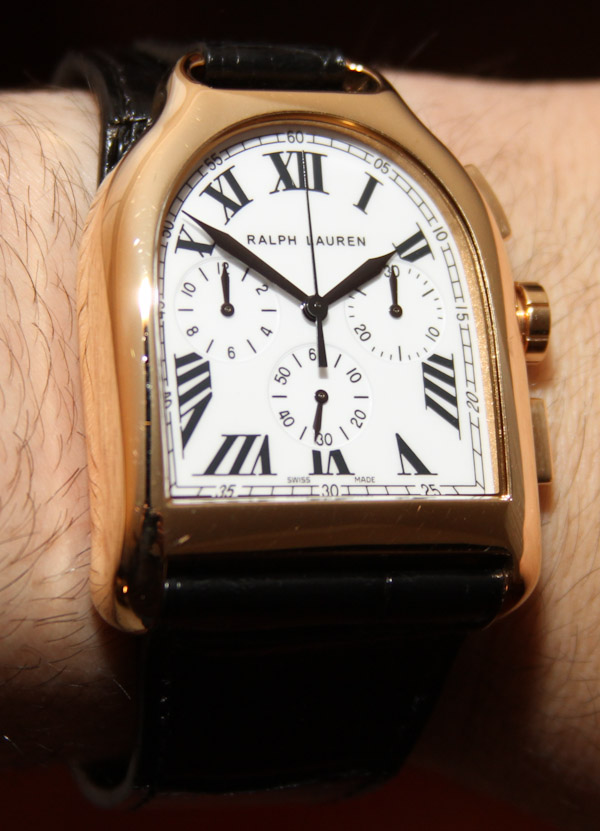 Legibility and wearing comfort are overall good with the Stirrup. While the design unorthodox, it isn’t too avant garde. Most people can easily pull this look off – but it will require a lot to pull them away from the very attractive Sporting and Slim Classic models. The Stirrup for men is available in steel with black and white dials starting at $6,600. This 18k rose gold model is priced at $25,100, while 18k white gold models are $27,200. At the top of the range is a platinum version of the Stirrup Chronograph with a white enamel dial priced at $68,500. What a difference some metal makes.

I want to sum up by saying that if you remove the Ralph Lauren name off of the dial, this, and other products from the newer brand could really be timepieces from most of the Richemont companies. That is because they are produced from the same series of suppliers and use the same database of production knowledge. They are effectively the same types of products you’d find from Cartier, IWC, Piaget, etc… Ralph Lauren was thus able to start off with a good quality watch collection, that it only needs to convince people that they aren’t mere fashion items.