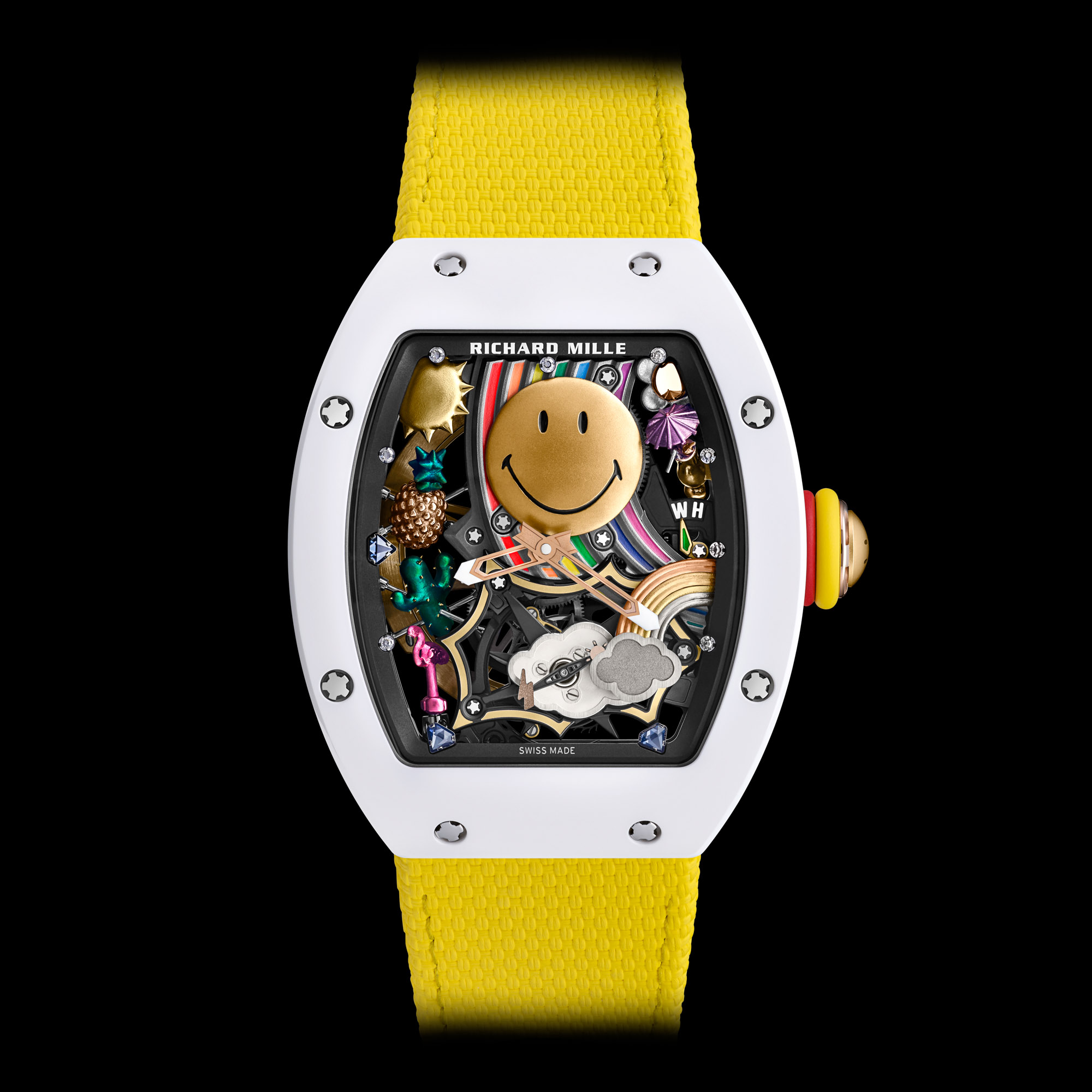 One of the latest Richard Mille watches that everyone is talking about is this limited edition of 50 pieces Richard Mille RM 88 Automatic Tourbillon Smiley. The goal of the watch is to make the wearer feel positive (i.e., smile), and the luxury story here, in addition to the Richard Mille horological credibility, is the art in the various hand-crafted miniatures on the dial which together make up this happy composition. It is true that the accountant of any person purchasing this watch might not smile once they realize this high-end timepiece’s price, but if you can divorce yourself from the reality of the cost, this is one charming tourbillon by the wizards at Richard Mille.

Playfulness has always been a cornerstone of the Richard Mille brand. Despite the very serious prices its timepieces are known for fetching, the Swiss watchmaker doesn’t take itself too seriously when it comes to taking chances with visual designs. The result has been a stream of watches that are celebrated for their variety in materials, shapes, complications, and, of course, colors and personality. The brand is just as prone to making wearable toys as they are horological wrist sculptures. The RM 88 Automatic tourbillon Smiley is a bit of both. Indeed, there are those who are going to see the design and mosaic of dial motifs and accuse the RM 88 of lacking taste, classiness, or utilitarian merit. Indeed, you could subjectively make all of those statements. At the same time, there are those people who can’t get over how excited they are to wear this luxury timepiece, which has seemingly captured the best years of Miami’s South Beach in a watch dial.

For years, watchmakers have known that a primary reason people purchase their products is that viewing those products makes the people currently wearing them smile. It is a fact that if your face forms a smile when you look at a watch sitting on your wrist, then you will probably buy that product, provided you can afford it. Some watch designs go about getting you to smile in a roundabout way. Those watches first need to educate you about their history and position in the horological universe for you to be impressed, then smile. Other watches, like this Richard Mille Automatic Tourbillon Smiley take a much more direct approach — by simply putting symbols on a watch dial that remind you of a good time. 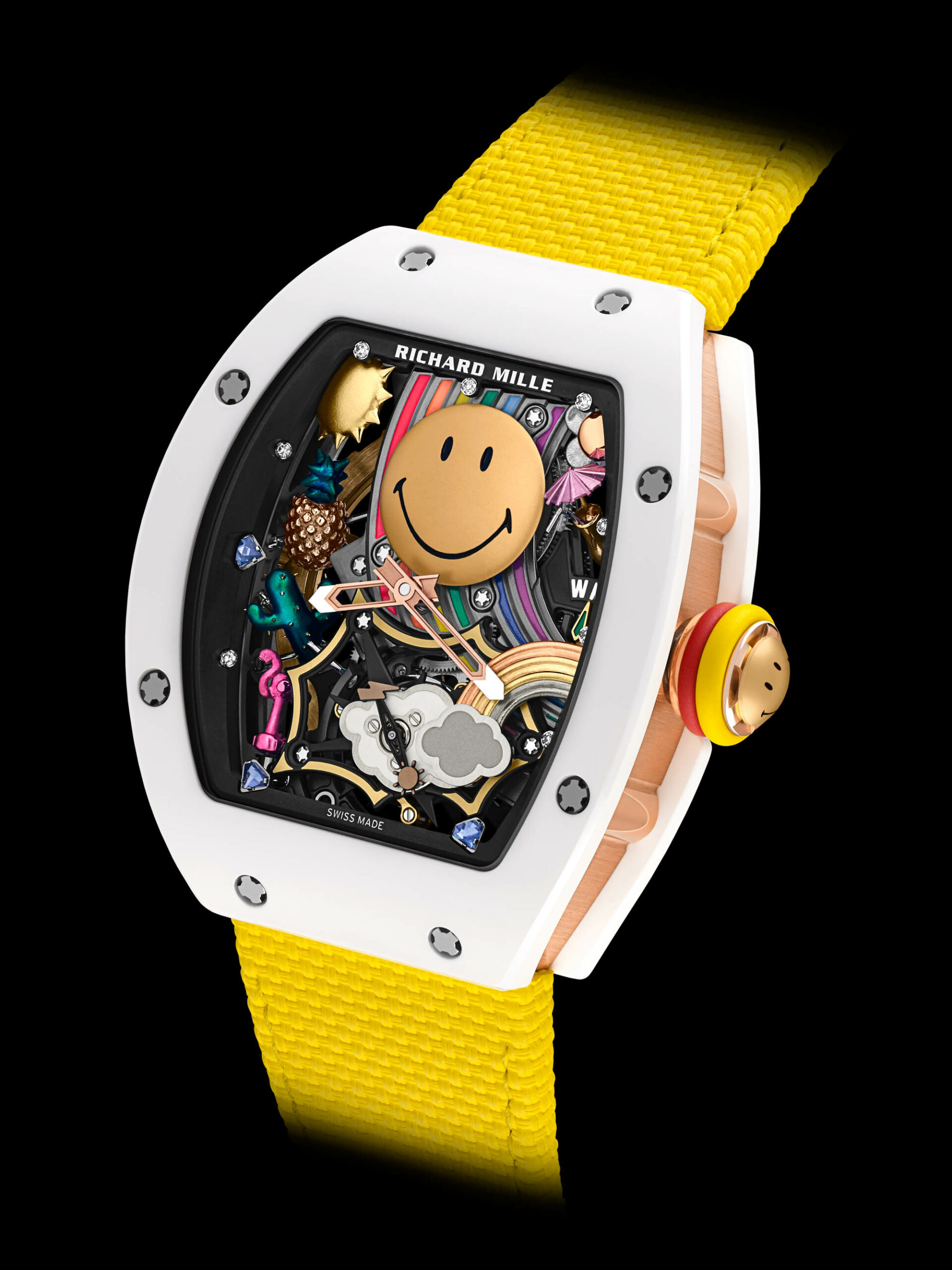 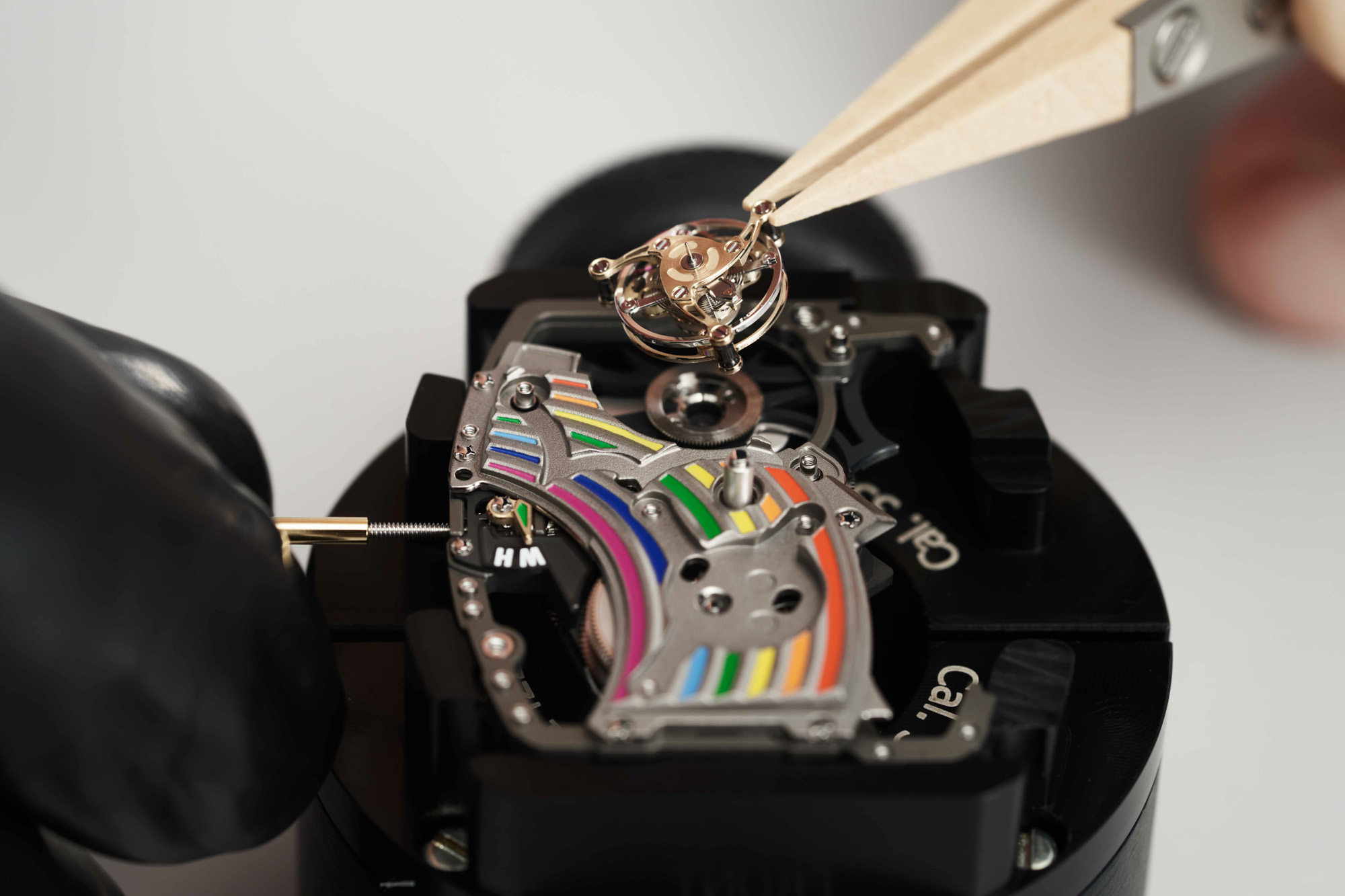 The more democratic and uplifting part of the RM 88’s story is that the things featured on the dial are ostensibly things available to most people. Indeed few people can own this watch, but if you look at the items on the dial which are meant to remind you of happiness, then you’ll agree that they are accessible to most people. They include things like rainbows after storms. sunlight. drinks by the water, vacationing, the joy of tropical fruit, and of course smiling. You could add to that the enjoyment of knowing your wristwatch is worth more than most people’s residences, but that’s a source of joy that is admittedly available to far fewer people.

Each of the miniatures on the dial of the RM88 is produced and decorated by hand. The brand knows how to render these objects incredibly well, and the representation of the classic “Smiley Face” by Franklin Loufrani is at the center of it all. The Smiley shows up again on the watch crown. While Richard Mille has done a lot of watches with various miniature sculptures on them, what immediately comes to mind with the RM 88 Smiley from 2022 are the Richard Mille Bon Bon watches from 2019 (hands-on with aBlogtoWatch here). This was the last collection of watches that Richard Mille ever debuted at SIHH (now Watches & Wonders) before they left the event, and it was interesting for them to leave the highly conservative trade show with such a brazenly liberal luxury concept with $100,000 plus watches inspired by candy. I personally felt the Bon Bon watches were a hit (they sold out quickly) and I am pretty sure that Richard Mille has a winning concept with the RM 88 Automatic Tourbillon Smiley for a similar audience, even though this watch is about 10 times the price of the average Richard Mille Bon Bon. 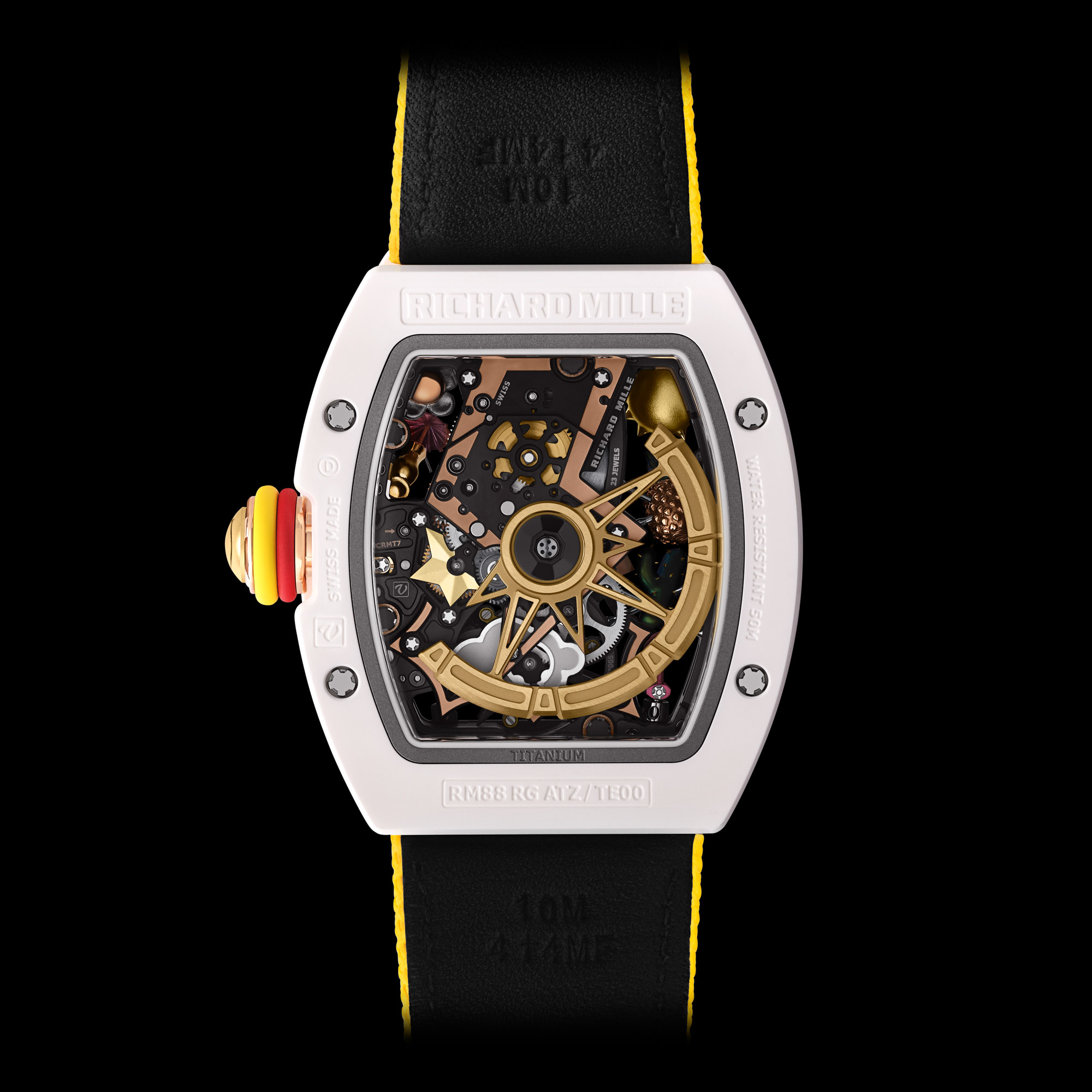 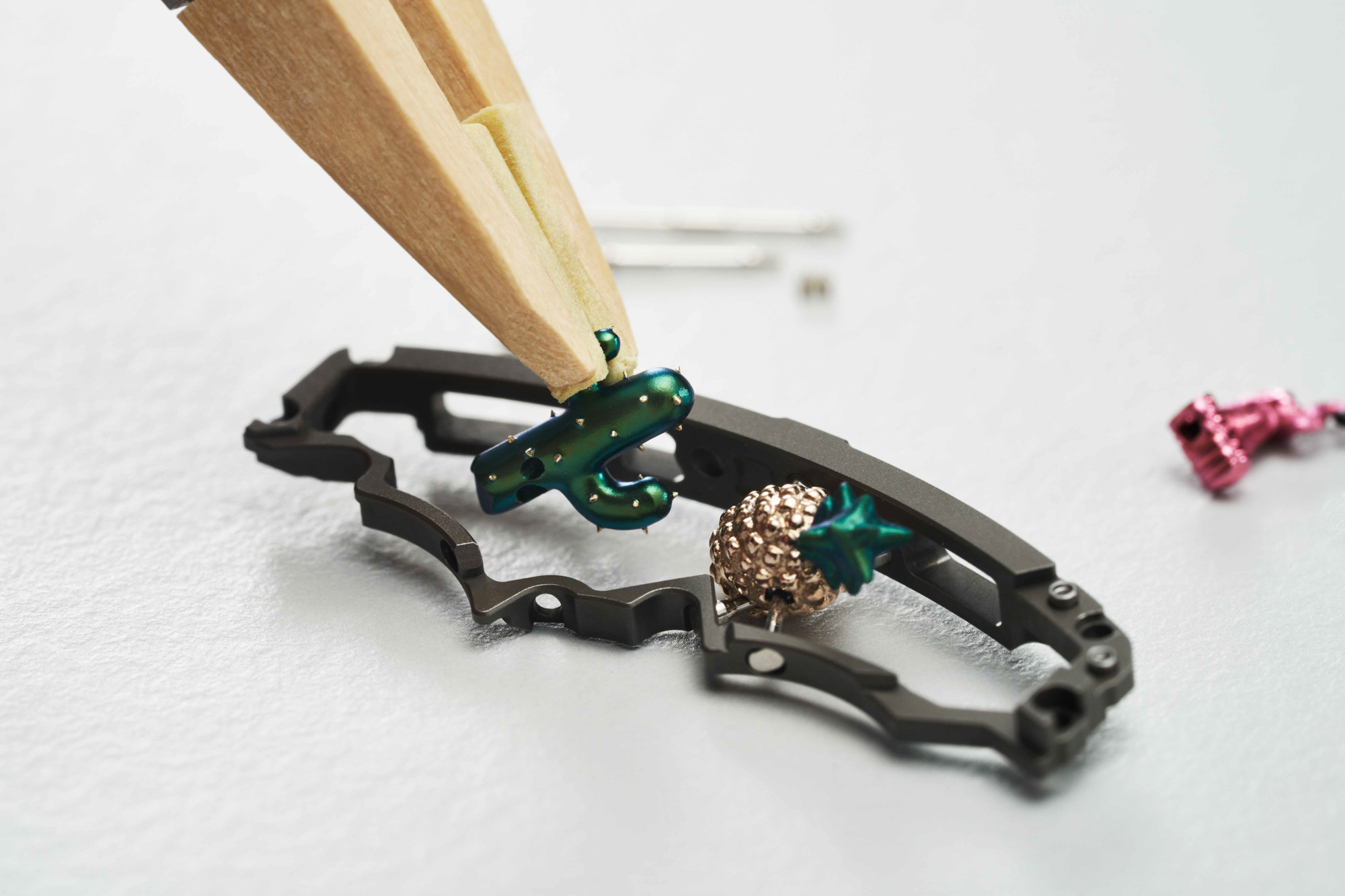 Case-wise, the RM 88 is produced from ATZ white ceramic and has an 18k red-gold middle case section. Color contrast is a big part of the theme, and that includes the black and yellow strap, as well as the white and gold case. The dial is ripe with a variety of bright, contrasting colors, and even the movement is decorated with a combination of black and gold colors. The case measures 39.74mm-wide, 13.3mm-thick, and 48.15mm-long. That isn’t small, but the size does lend itself to a “unisex” look given that this would be medium in size by Richard Mille standards.

The movement inside the RM 88 Automatic Tourbillon Smiley is reportedly new and is the in-house caliber CRMT7 automatic. It features the time with tourbillon and a function indicator on the dial, which tells you what operation turning the crown will currently perform. The movement is mostly made of titanium plates and bridges that are skeletonized and then specially colored. The tourbillon is not immediately visible on the dial; its 60-second spinning operation is indicated by a sun and storm hand. To me, this latter design feature is an allegory in regard to the often pendulous nature of how good and bad things seem to always come and go. When there is a storm, then it is wise to wait it out, as the sun will eventually emerge and disperse the clouds. The Richard Mille CRMT7 automatic movement operates at 4Hz with a power reserve of about 50 hours. 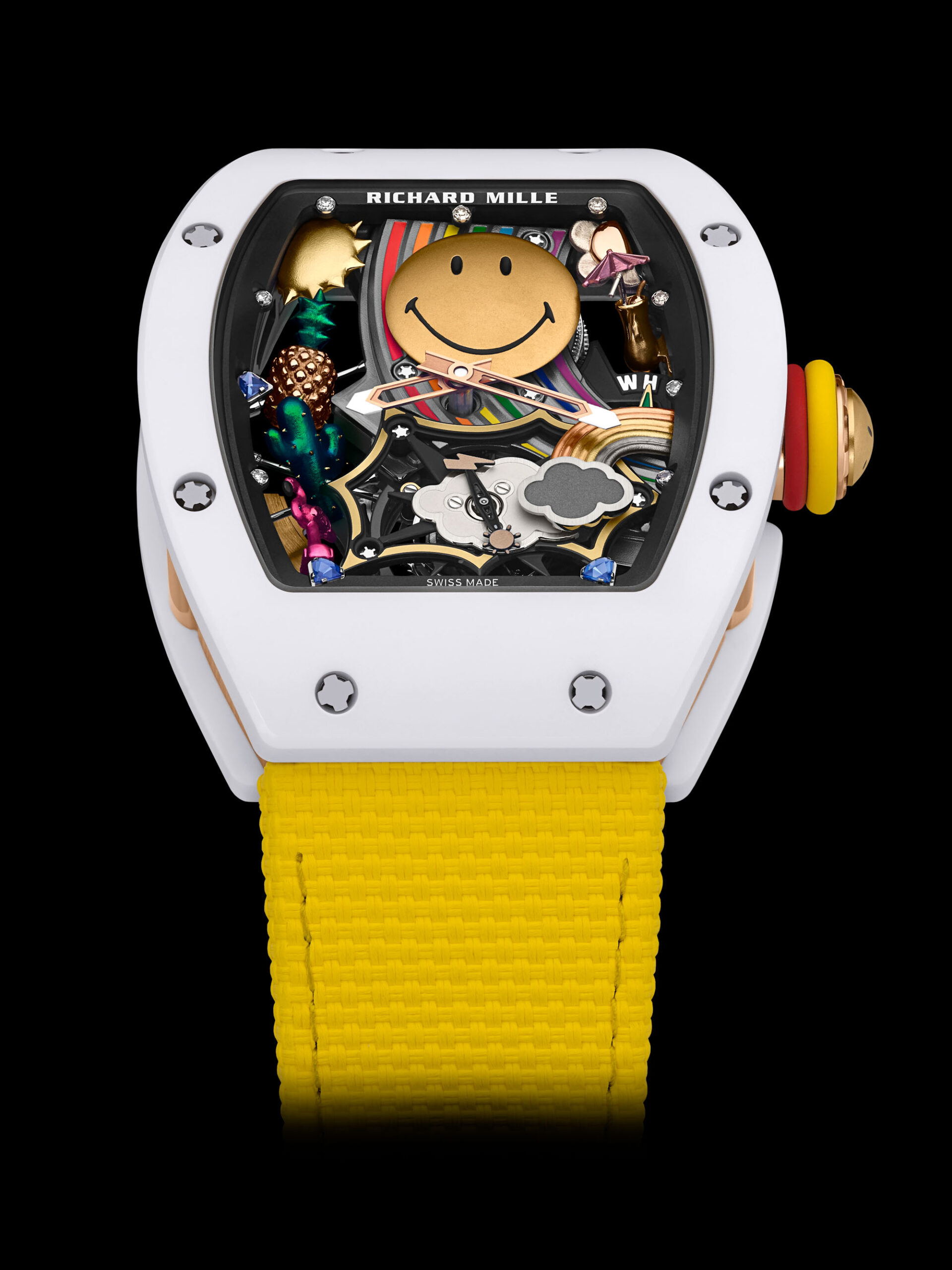 Also note that there are additional luxury appointments on the dial in the form of a few diamond and blue sapphire stones set as hour markers on the face. The overall mixture of traditional horology, pop art, and miniature crafting allows the Richard Mille RM 88 Automatic Tourbillon Smiley to present a complete and compelling story as a contemporary high-end wearable object. It certainly isn’t for everyone, nor is this a watch that is (somewhat ironically) trying to make everyone out there smile. If Richard Mille can give just enough of the right people kicks with this smiling timepiece, then the brand has done its job properly. Price for the Richard Mille RM 88 Automatic Tourbillon Smiley watch is $1,200,000 USD. Learn more at the Richard Mille website here.