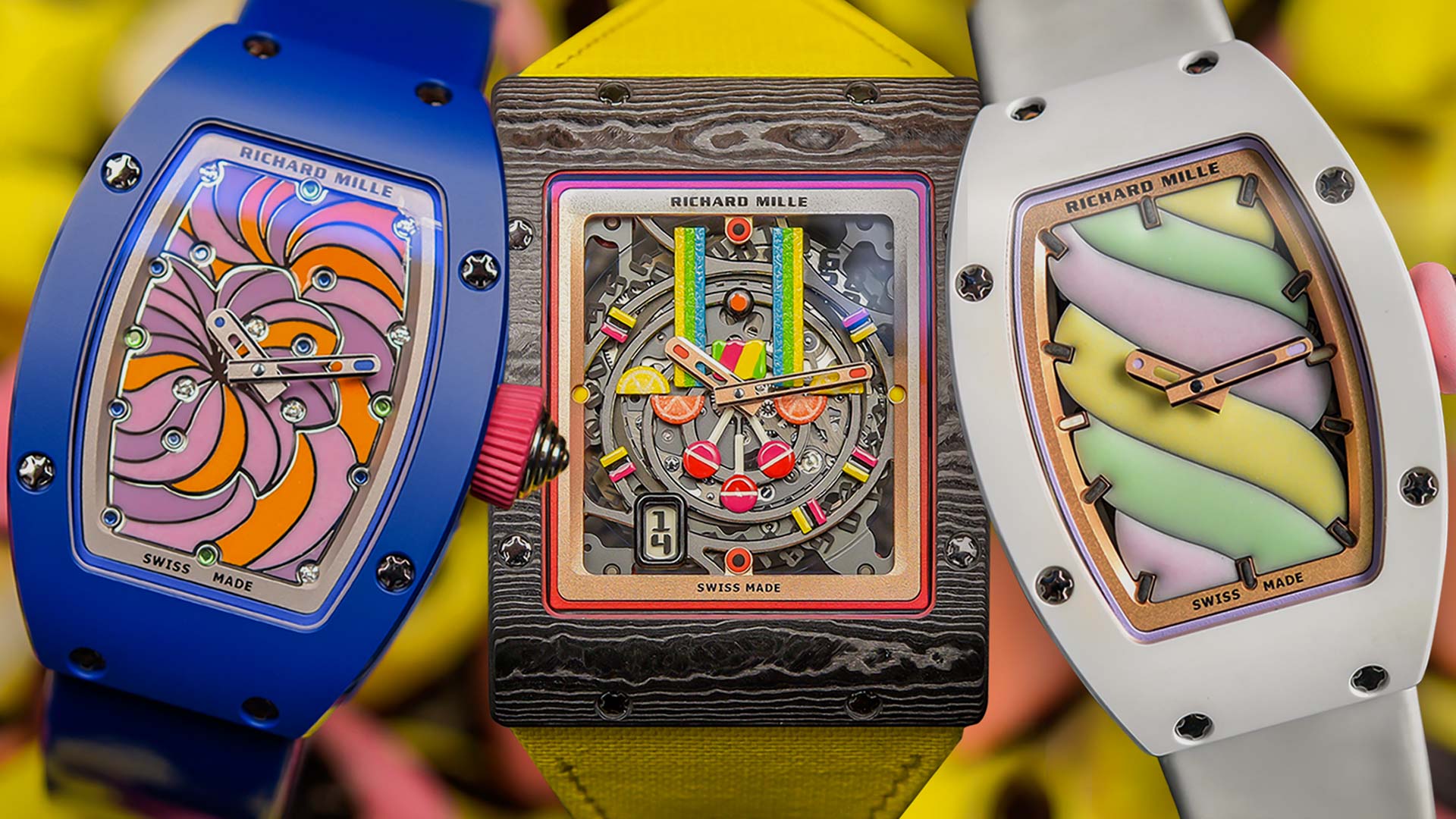 It might sound creepy and all, but I sometimes wish I were a fly on the wall. Like when the idea for the Richard Mille Bonbon Collection was first raised and presented at the brand’s HQ, or when fellow exhibiting brands at SIHH saw Richard Mille’s swan song at its last SIHH this year. In other words, the Richard Mille RM 07-03 Cupcake, Richard Mille RM 07-03 Marshmallow, and Richard Mille RM 16-01 Fraise are basically destined, and perhaps programmed, to upset people — even though I am sure we would all agree to a watch industry in which such cheeky creativity is the be-all and end-all. 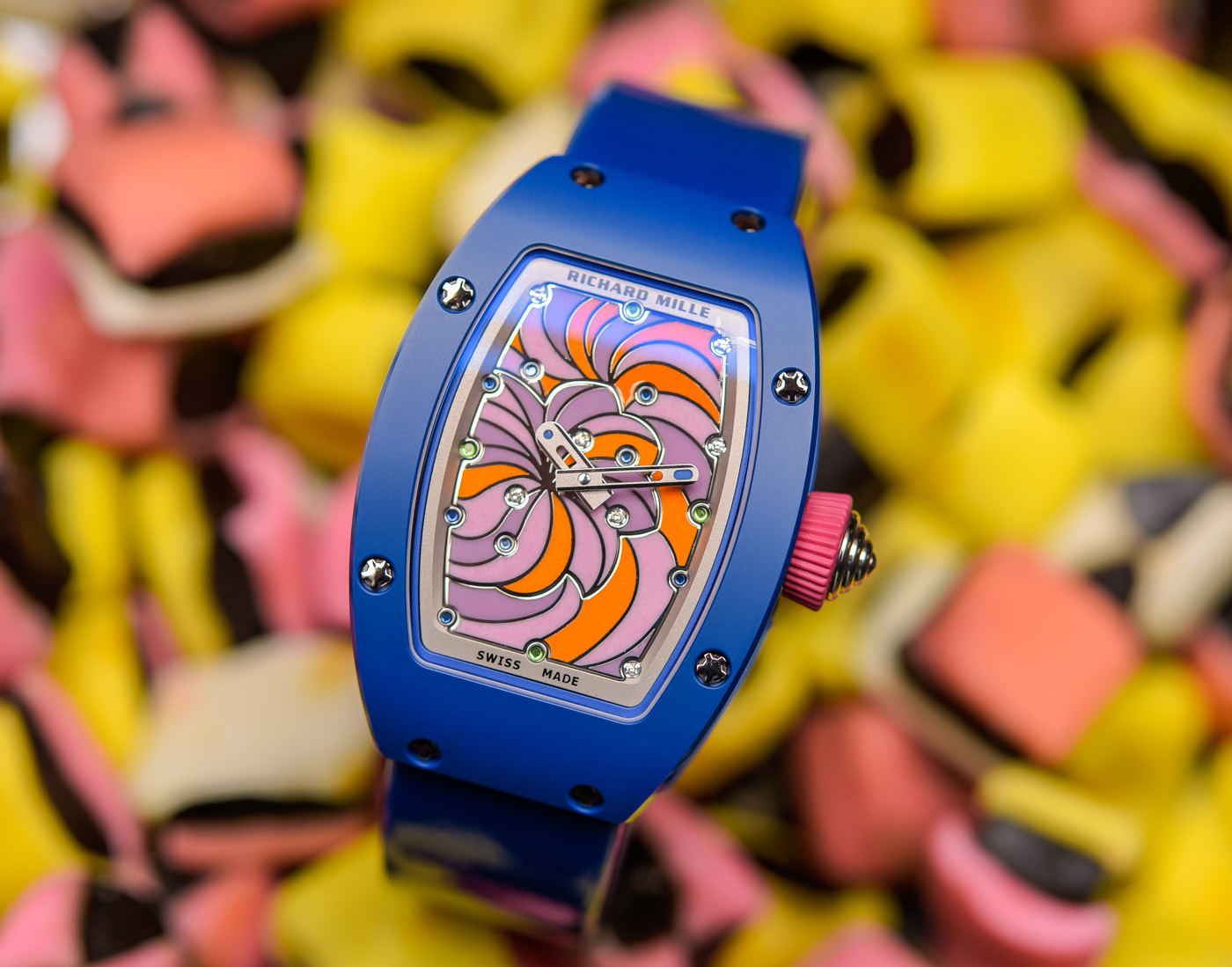 I don’t know. Maybe you think you do, but in reality, you cannot know for sure, either. What I mean is that I still don’t know if the Bonbon Collection is meant as a practical (and ridiculously expensive) joke, or if it is a genuine product created after careful consideration of market research and a deep understanding of a dedicated customer base. It would be tempting to go for the practical joke aspect, especially since Richard Mille is among that handful of brands that could actually pull off such a bonkers move. Just look at that wilfully wonky “SWISS MADE” text in a place where nobody asked for it or the actual cupcake-shaped crown, both on a $130,000 watch. 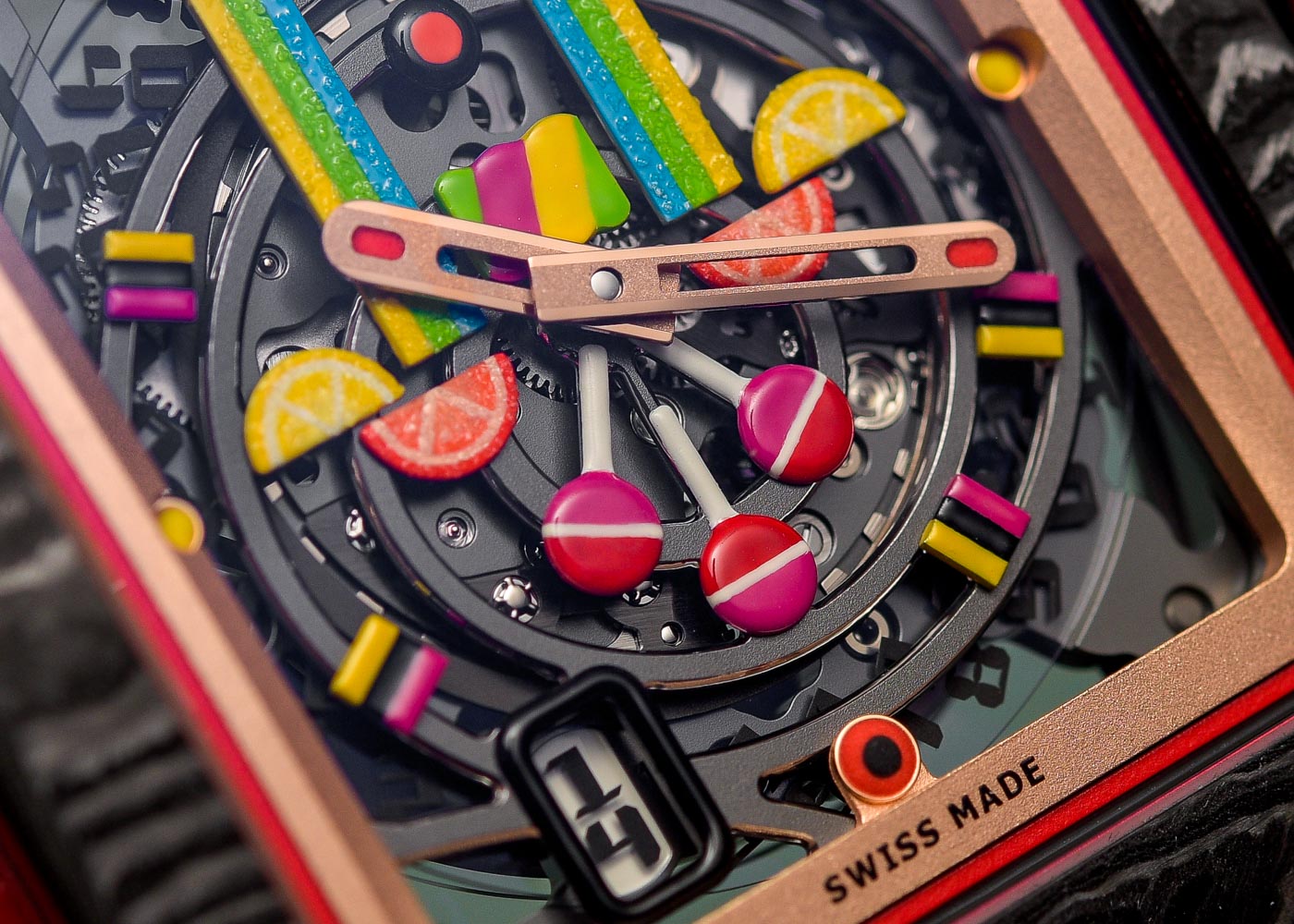 Or just look at this diabetes-inducing dial, with lollipops and other types of sweets I don’t even know the names of, all crafted by hand and laid over an elaborately machined, high-tech titanium movement that few in the luxury watch industry could even describe how to make — let alone actually make it. For the record, Richard Mille has been relying on Manufacture Vaucher’s expertise for its less complex automatic movements and on APR&P for its complicated calibers. The bipolarity between a child’s dream-diet and ultra-high-end watchmaking is enforced by those thick hands, which are so shockingly massive and elaborate they could give a seasoned hand-manufacturer sleepless nights over the prospect of a wasted life. 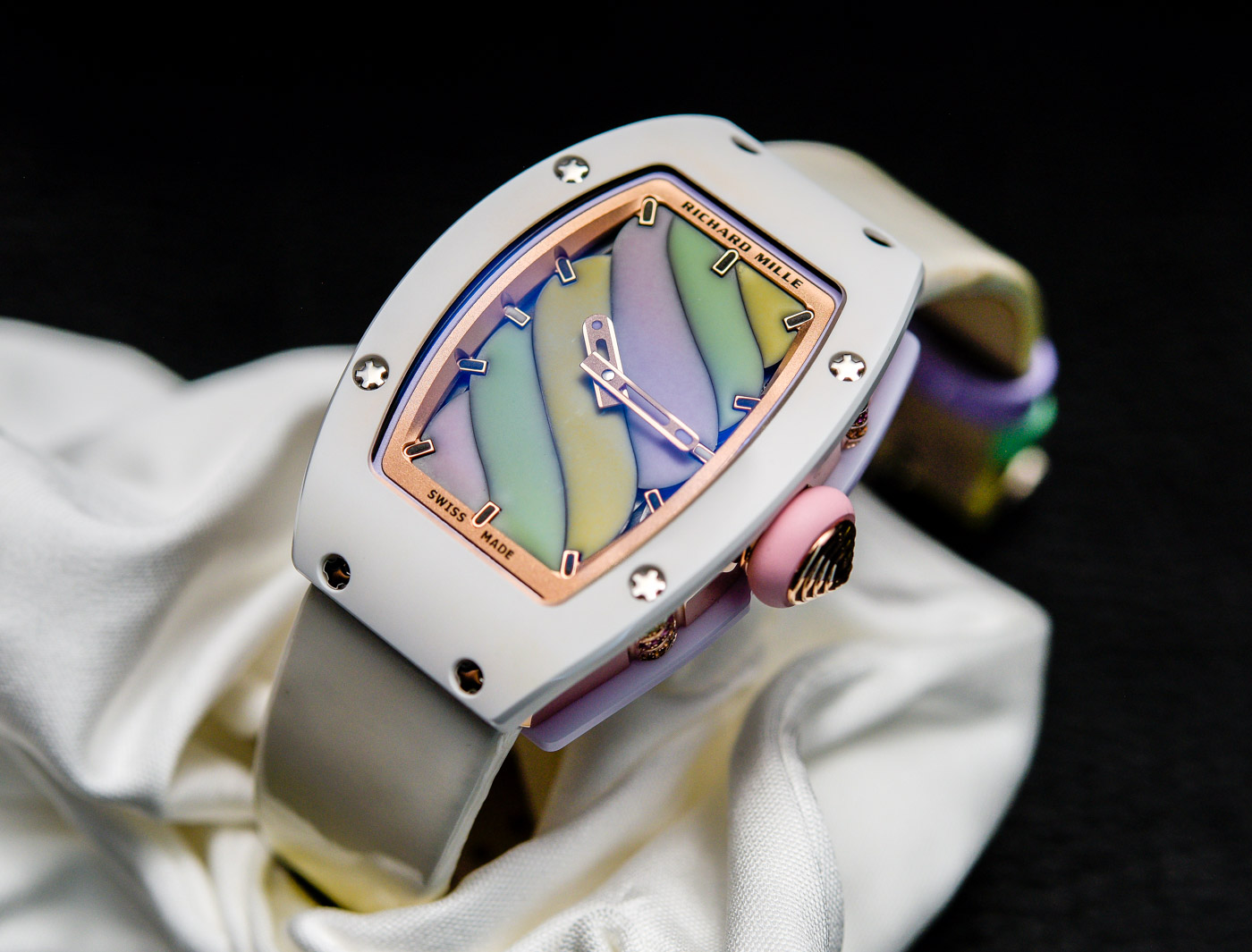 Forcing the prospect of an elaborate joke aside, could this be a product that has come to be after Richard Mille has taken a good look at the ultra-high-end luxury accessories market, its current trends and hot-sellers, as well as the heartfelt wishes of its established customer base? Maybe all it wanted to do is design a funky, colorful, and cheerful watch that would cater exactly to them? Ariel said it best when he referred to these as jewelry items in our hands-on video from when we saw the Richard Mille Bonbon collection at SIHH 2019.

Correct me if I’m wrong, but I believe luxury jewelry, in general, not only gets a pass for being this playful and creative but is also by and large encouraged to be exactly that. By contrast, according to some, creativity in watchmaking should be limited to shaping the plates in a hand-wound chronograph movement a bit differently… Maybe a red chronograph seconds hand is acceptable. 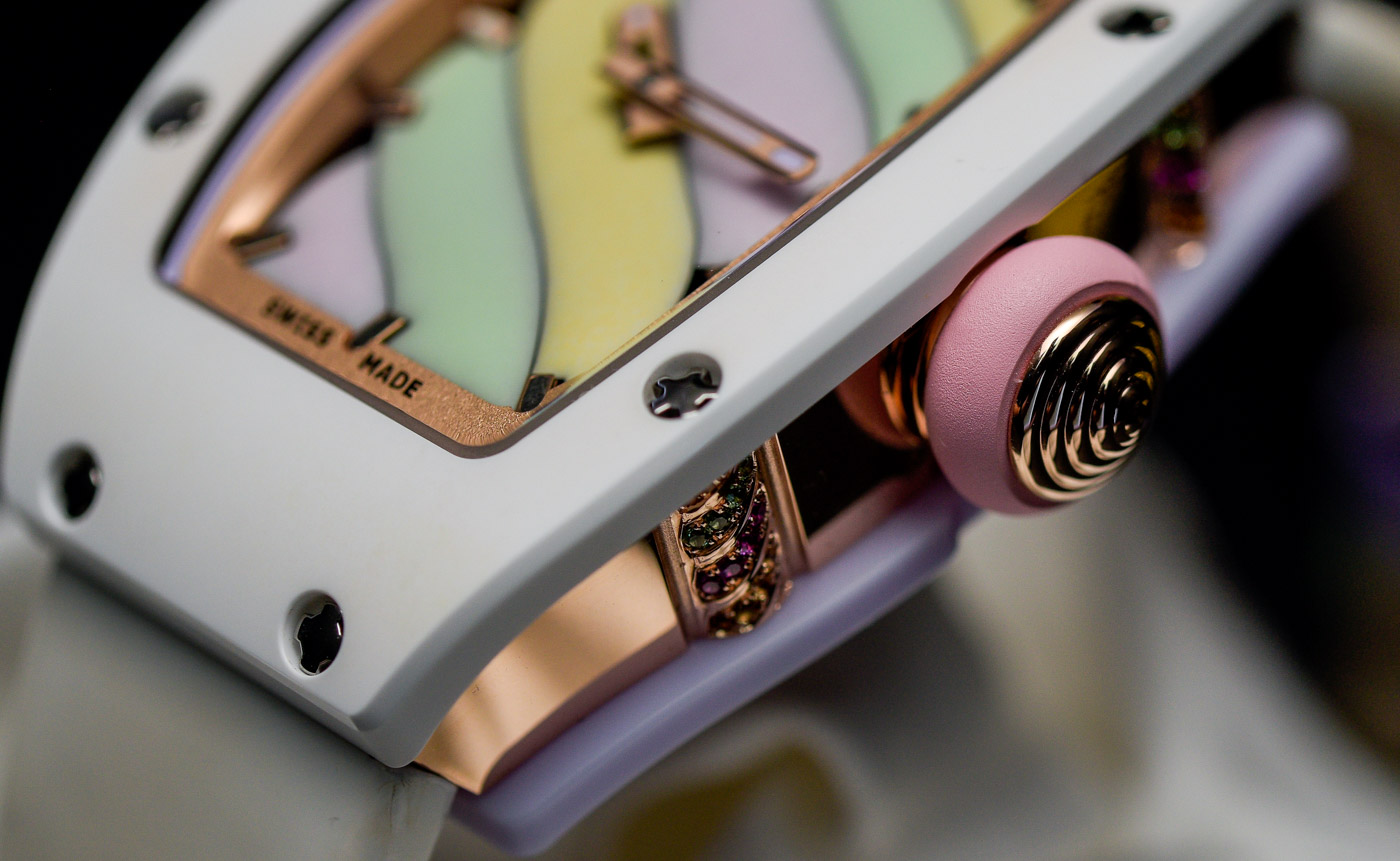 This has set the foundations of an environment that is often hostile and extremely critical of watches of arguably weird and unusual bursts of creativity. As such, over the years we have seen hot-selling brands get severely criticized by those so insistent on a, ahem, more traditional taste. Some historic brands, as well as quick-to-the-top ones, had been motivated by their success to release increasingly bolder new watches that they thought their brands were strong enough to take. Franck Muller and Audemars Piguet immediately come to mind with different versions of their own mistakes — and having suffered for them big time. The difference between them and Richard Mille is that, apparently, the Richard Mille brand is robust enough to bear such a cheeky twist on its core designs — though it is notable that RM has left the famed RM-11 well clear of this adventure. 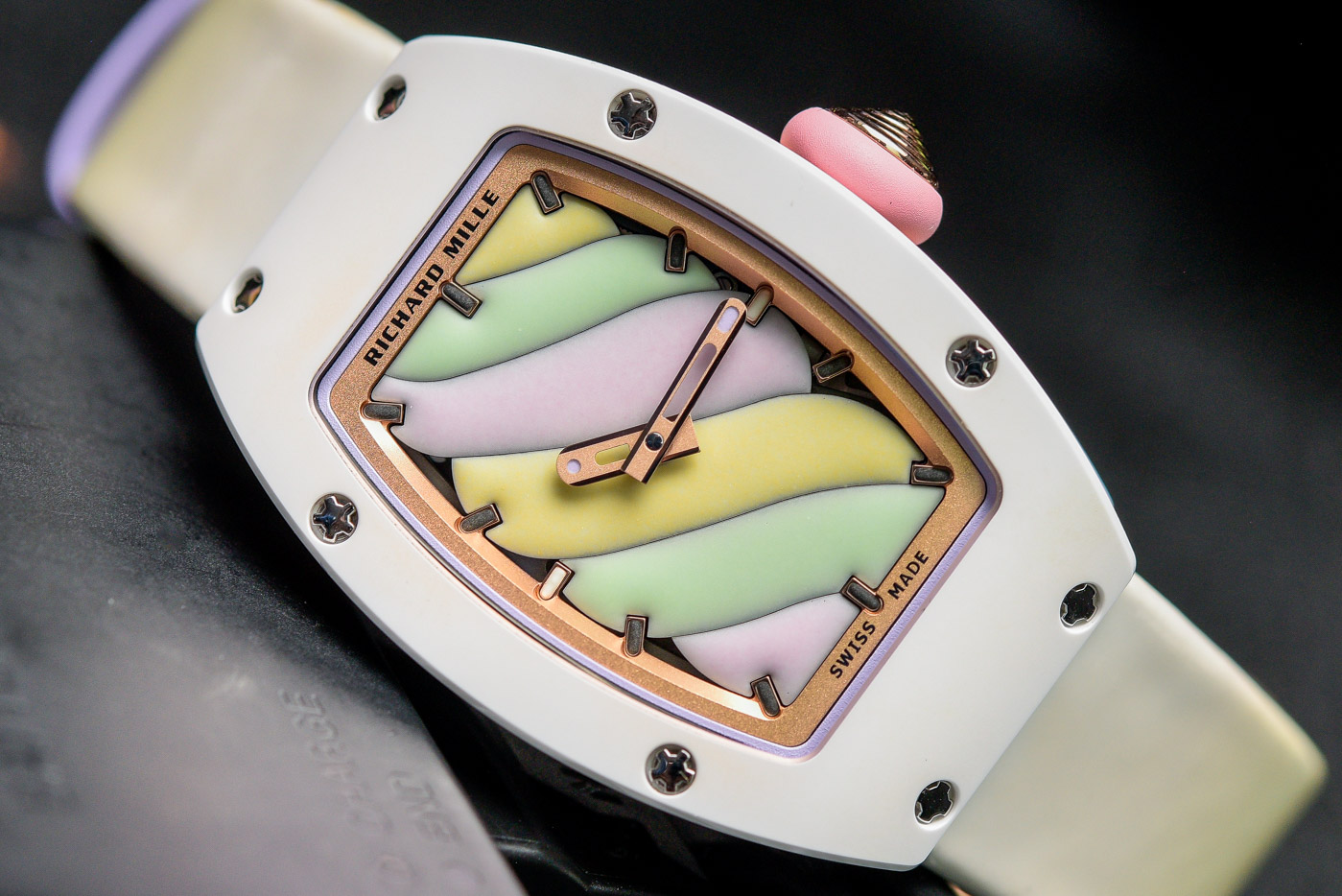 Just look at where the world’s leading high-end fashion houses are taking women’s clothing, shoes, and accessories and you will see how basically none of the established ultra-high-end watch brands are offering anything that would even loosely fit into the world of bold proportions and crazy colors dictated by fashion companies and followed with immediate effect the world over.

In line with the painful absence of actually trendy women’s watches, I have trouble imagining these pieces spending too long on the shelves. As far as women’s watches are concerned, none of the established brands come close to such borderline ridiculous levels of creativity. These days, Cartier and Bulgari are playing it too much within the confinements of their own DNA, while Patek Philippe and Jaeger-LeCoultre are limited to mixing neatly executed craft with vaguely emotional inspirations, mostly cheesy stuff such as the fish of the seas, or the aurora borealis. The world’s fashion-conscious rich simply can’t fit those into their daily rotation of expensive clothing — and so those watches, with very few exceptions, only really pass muster within the dimension of horology but don’t make enough of an impact outside. Sad, but true. Richard Mille goes all the way, into and through the wall, and gives its peers what they apparently want/need these days. 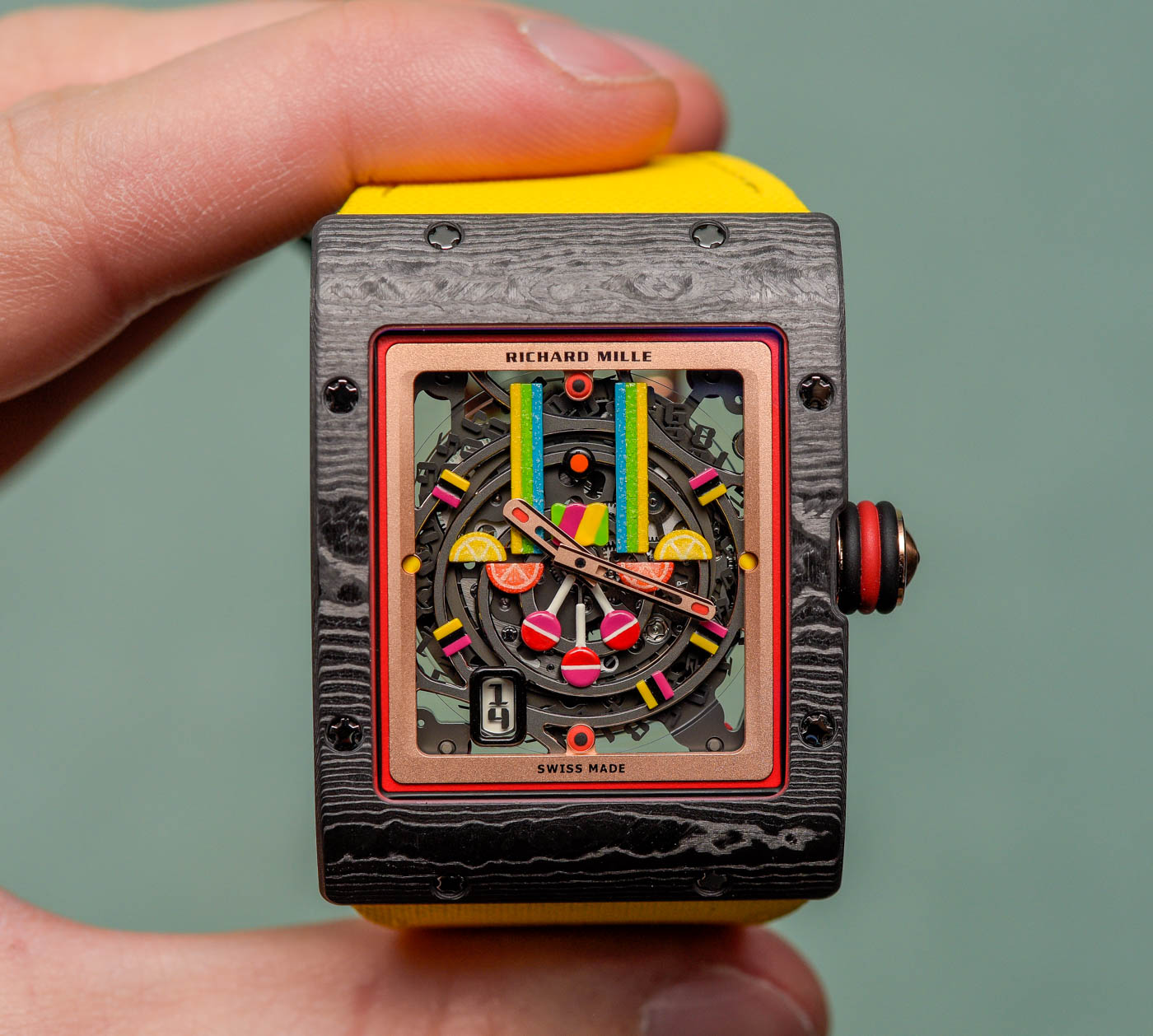 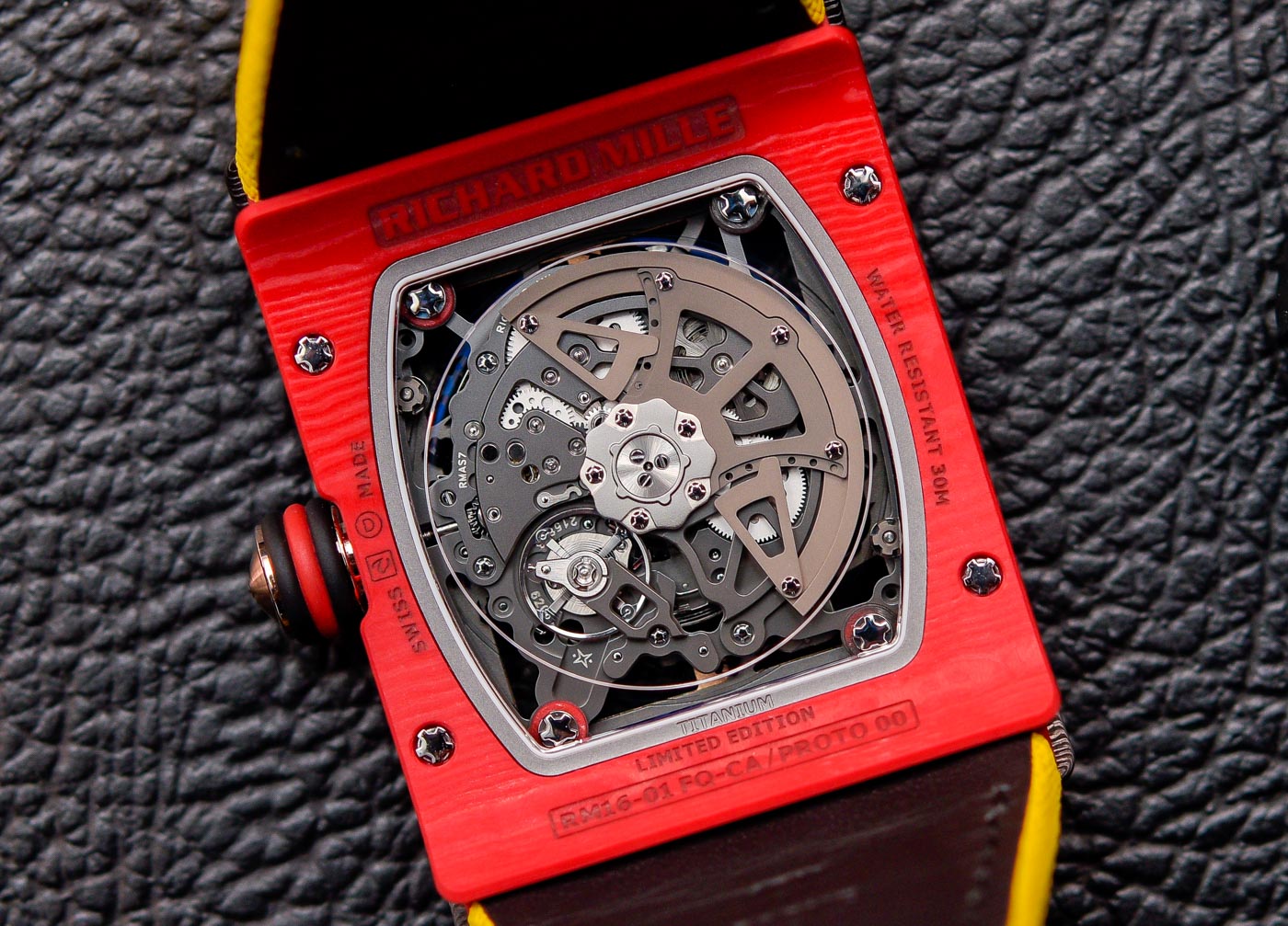 The Richard Mille Bonbon Collection actually consists of 10 different references, split into four pieces in the “Sweets” and six pieces in the “Fruits” line. Each reference is limited to just 30 pieces, so a grand total of 300 Bonbon Collection watches will be made. For this hands-on article, we sampled three pieces: the Richard Mille RM 07-03 Cupcake, Richard Mille RM 07-03 Marshmallow, and Richard Mille RM 16-01 Fraise, with the latter essentially being the men’s model of the three. To me, none of the names or collections makes any sense. My favorite of the bunch, the RM 16-01 Fraise, the blocky-colorful thing above, is named the strawberry and, hence, belongs to the Fruits line, while essentially only having candy and fruit-shaped candy all over it. 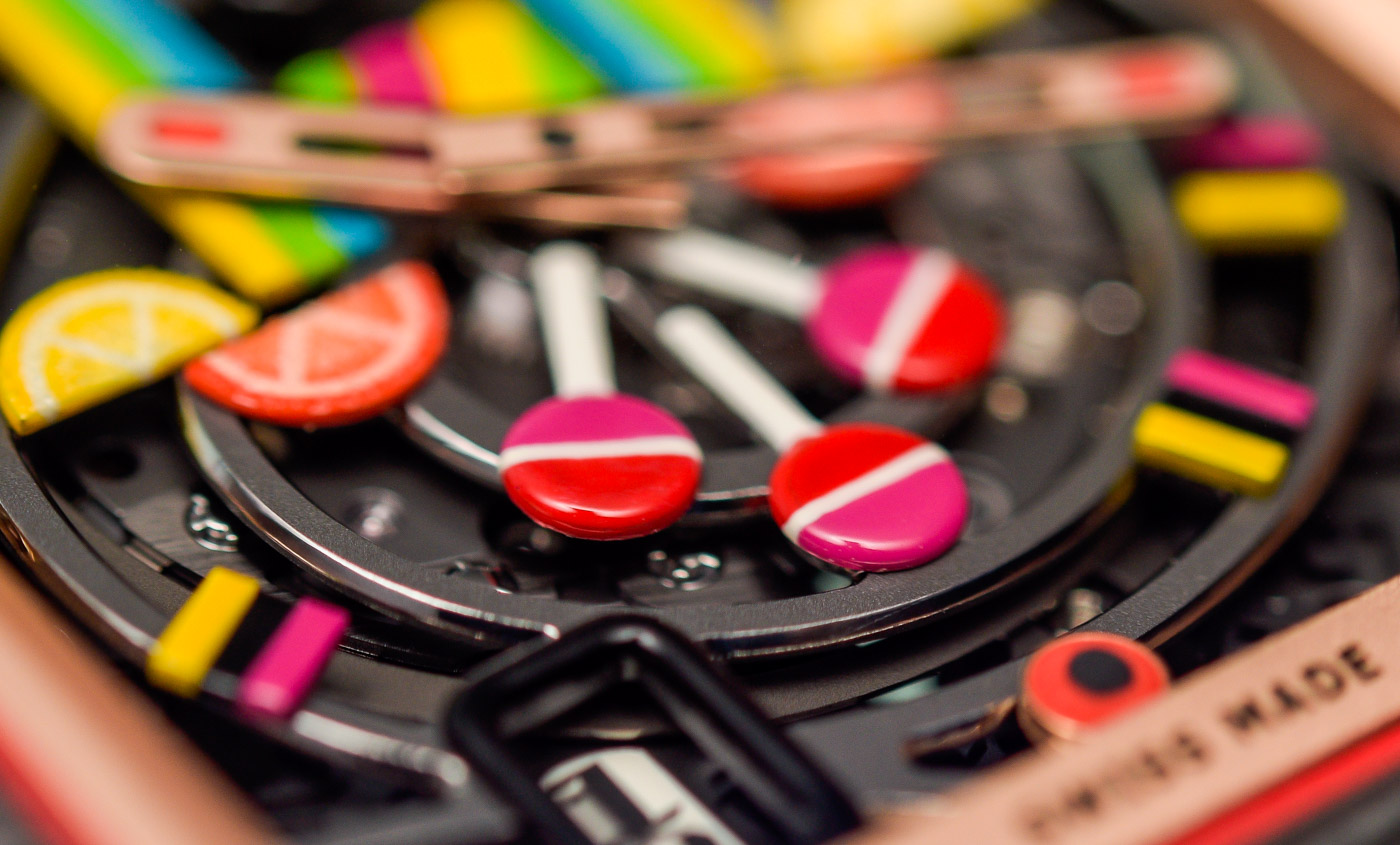 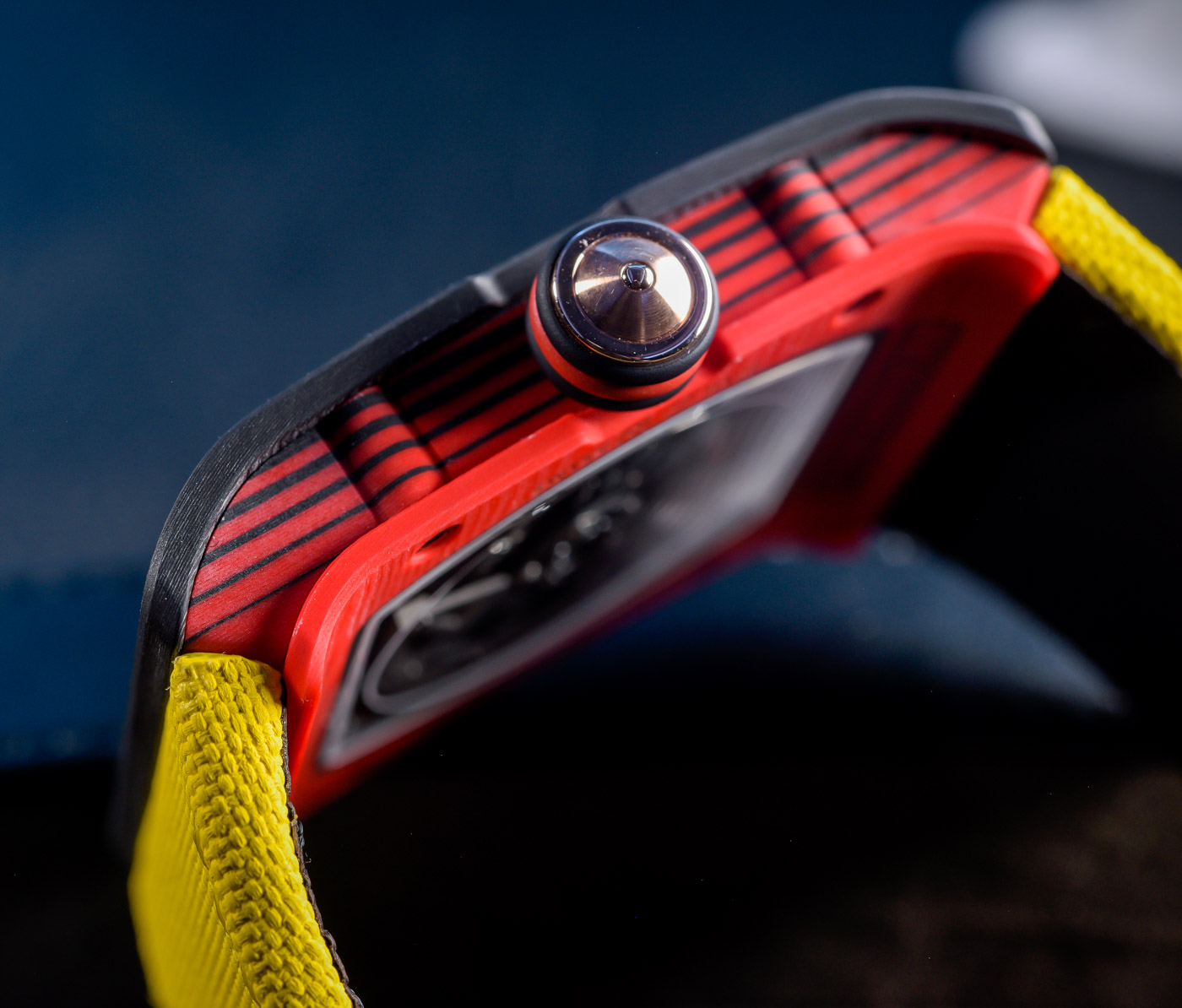 These being Richard Mille watches, they are of course chock full of high-tech and also highly refined details. Countless layers of variable thickness of Carbon TPT make up the bi-color cases of the Fruits collection, while TZP Ceramic is used to create the creamy-soft cases of the Sweets collection. To make the dials, a total of 3,000 hand-painted and hand-lacquered miniature sculptures were made and a new “sugar coating” effect was developed using powdered enamel and the fine sand from hourglasses — apparently. It’s old-school artisanship wrapped inside Carbon TPT. 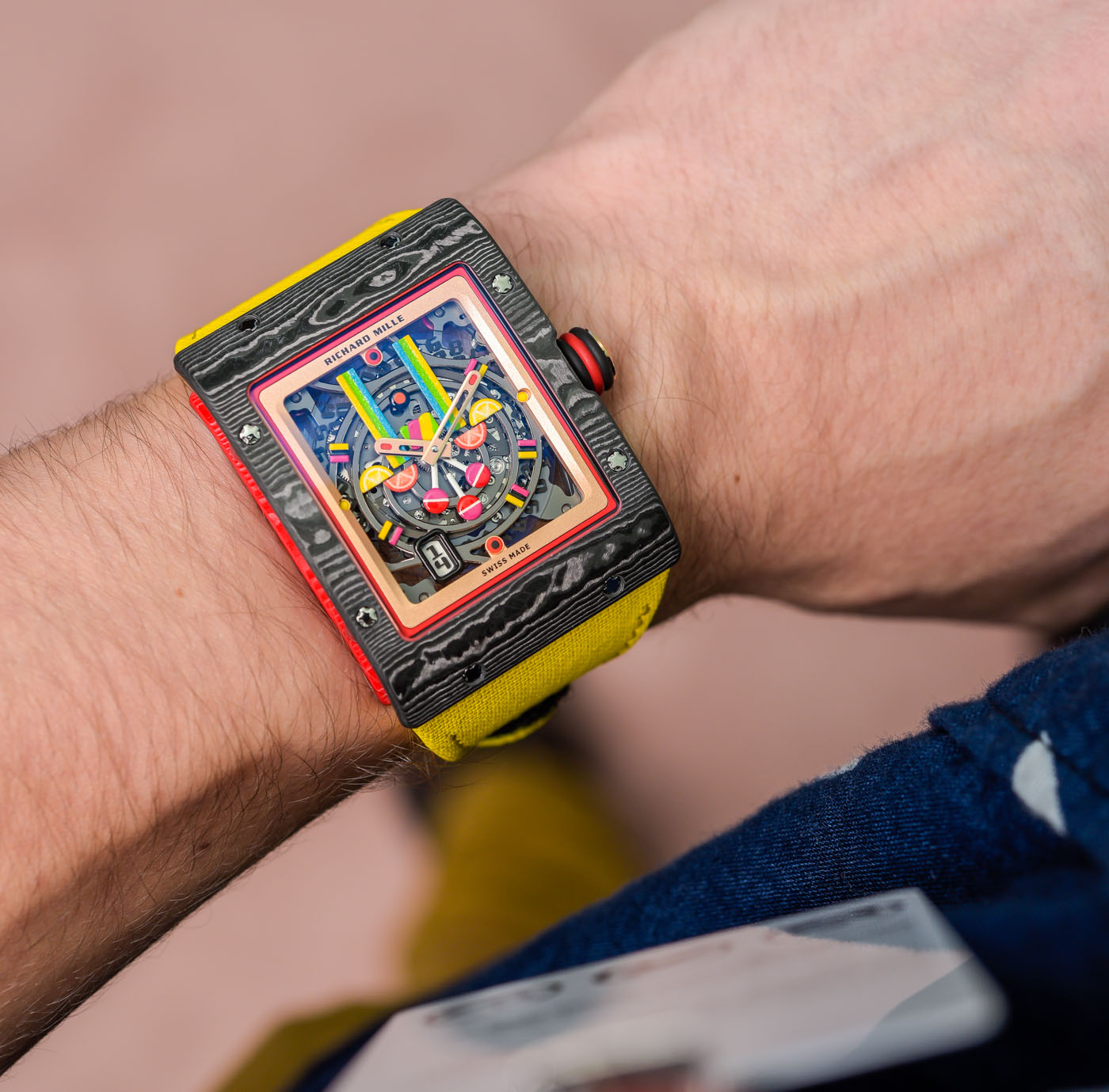 So, why should we watch lovers care about this weird collection of outrageously expensive candy watches? Because they shock us into remembering that haute horlogerie and delicate crafts need not only be used to create derivative watches that somehow, I suspect, get a pass and these won’t. But something is telling me that the small workshop that made the 3,000 colorful dial components had a field day meeting this challenge, as opposed to painting the gazillionth cheesy enamel image onto a round dial. Just guessing. 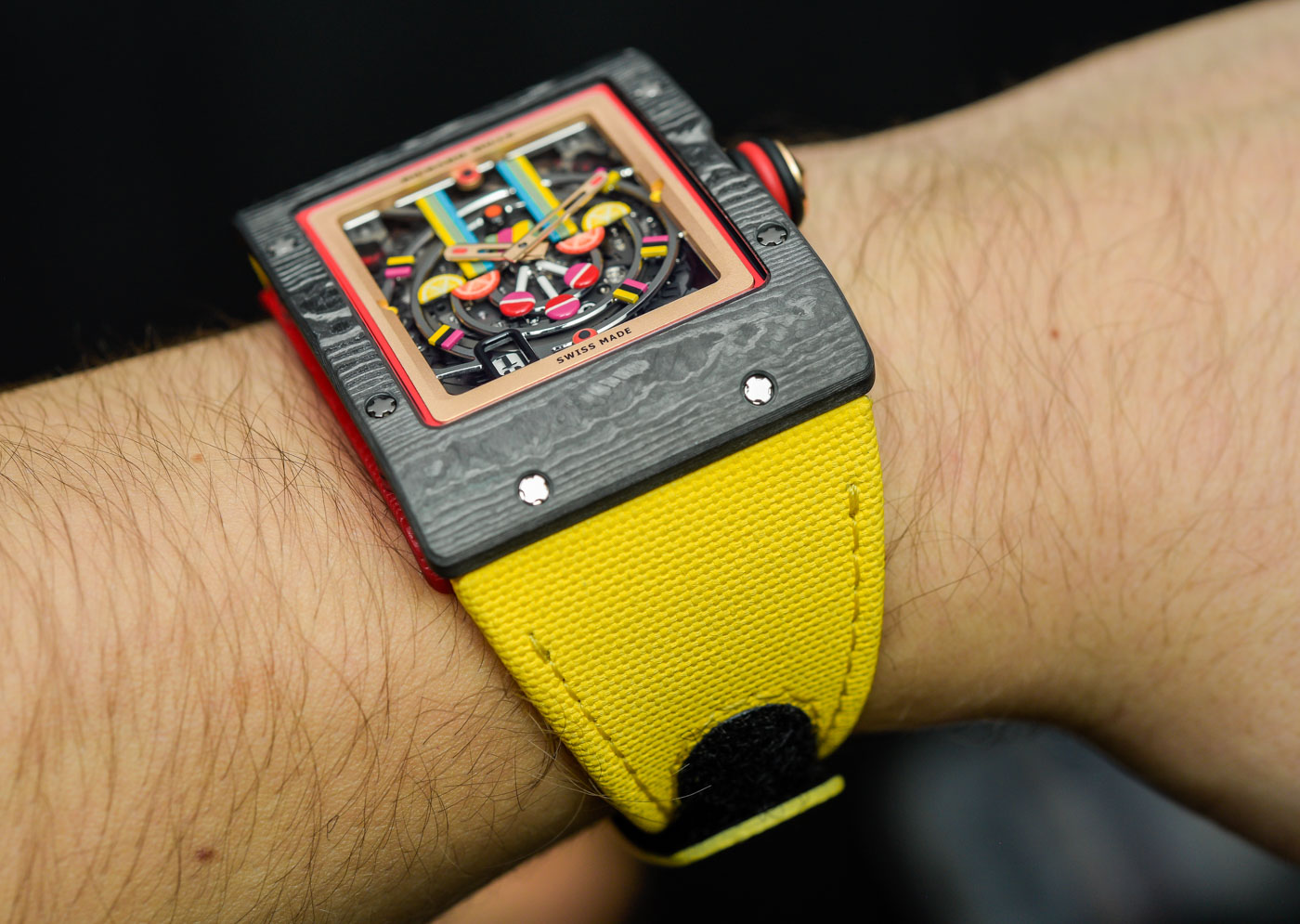 To answer the original question, I think the solution is that the Richard Mille Bonbon Collection is a mix of both: It is a practical joke crafted after carefully gauging the number of established and tentative Richard Mille customers who have their black Centurions erect and ready for a swipe to be part of an elaborate joke like this. It’s horological entertainment performed at unrivaled levels of quality in execution, topped off with the showoff power of the Richard Mille name. Give me a reason why that wouldn’t work.

Prices for the Richard Mille Bonbon Collection range between $122,500 to $158,000 USD, and you can see the entire collection at richardmille.com.