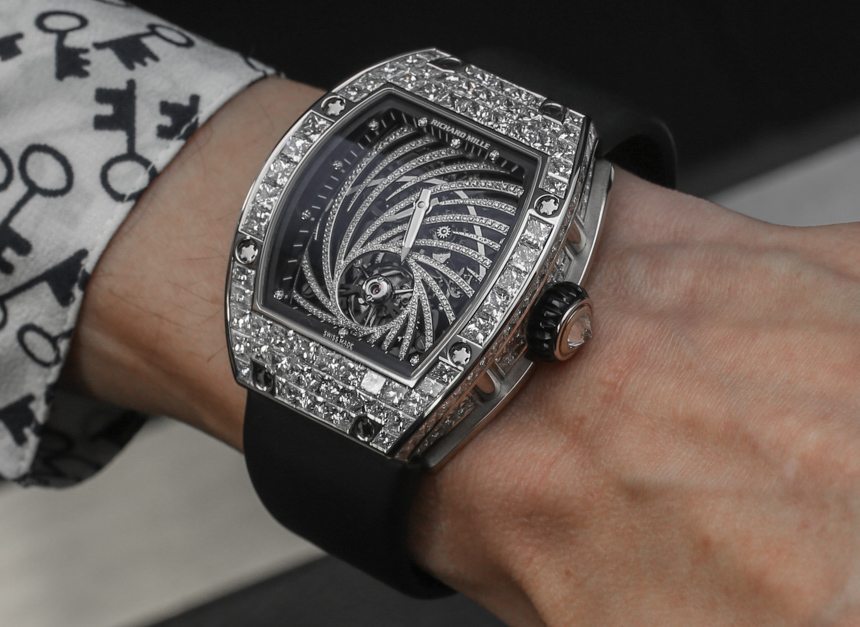 There are dozens of ways to segment the tastes of watch lovers, and one is to draw a line between people who appreciate timepieces with the addition of precious stones such as diamonds and those who simply do not. There is no right or wrong answer to the question of whether or not a watch decorated with diamonds is better as a result. It is a matter of taste, budget, and perhaps most importantly (well, budget is probably the most important to many people) whether or not you feel a timepiece can exist as a functional jewelry item or if it should primarily be something functional.

I say all that because depending on your personal tastes and feelings on the matter of horology, a watch like this Richard Mille RM 51-02 Tourbillon Diamond Twister is either amazing or represents all that is wrong in the world of watches. It is also a women’s watch, but as it is a Richard Mille, you get an equal focus on the jewelry dimension as on the high-tech watchmaking dimension. So are you ready for a Tourbillon Diamond Twister? That sounds like a very expensive force of nature or a thrilling ride at a water park – “it’s so thrilling, they found two ways to say whirlwind in the name!” 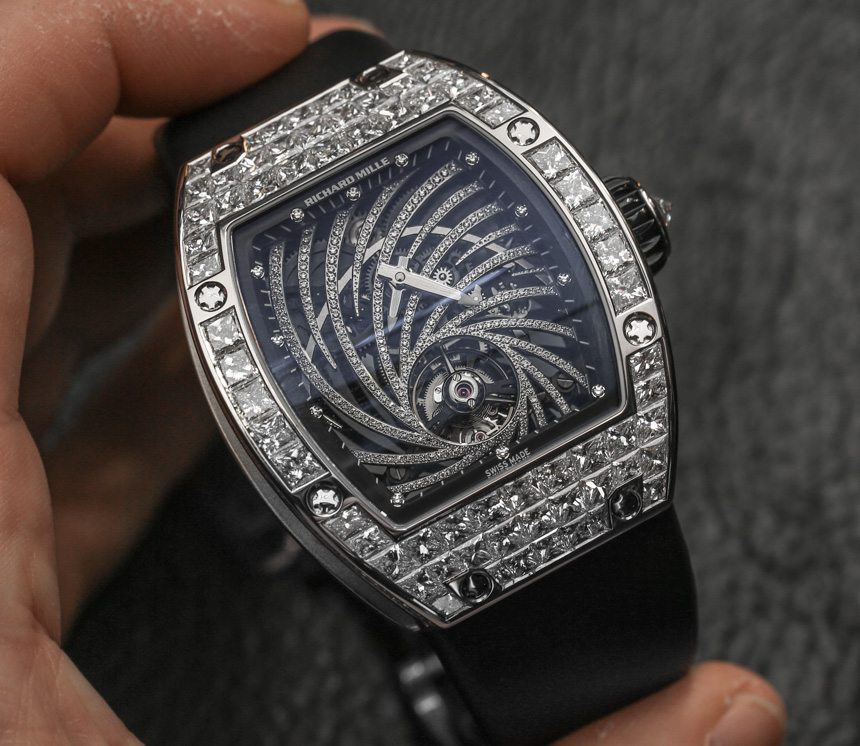 Take a look at the RM 51-02 on the Richard Mille website and you won’t see this precise timepiece – at least, not where I was looking on their website. There, you’ll find the “lesser” version of this Richard Mille RM 51-02 Tourbillon Diamond Twister which has a case set with brilliant-cut diamonds in contrast to the larger (and thus more carat weight) baguette-cut stones on this particular version of the RM 51-02. All version of the Richard Mille RM 51-02 are essentially the same watch, but this one we got a chance to check out is clearly the more luxurious of the set with its close-to-$1,000,000 price tag. 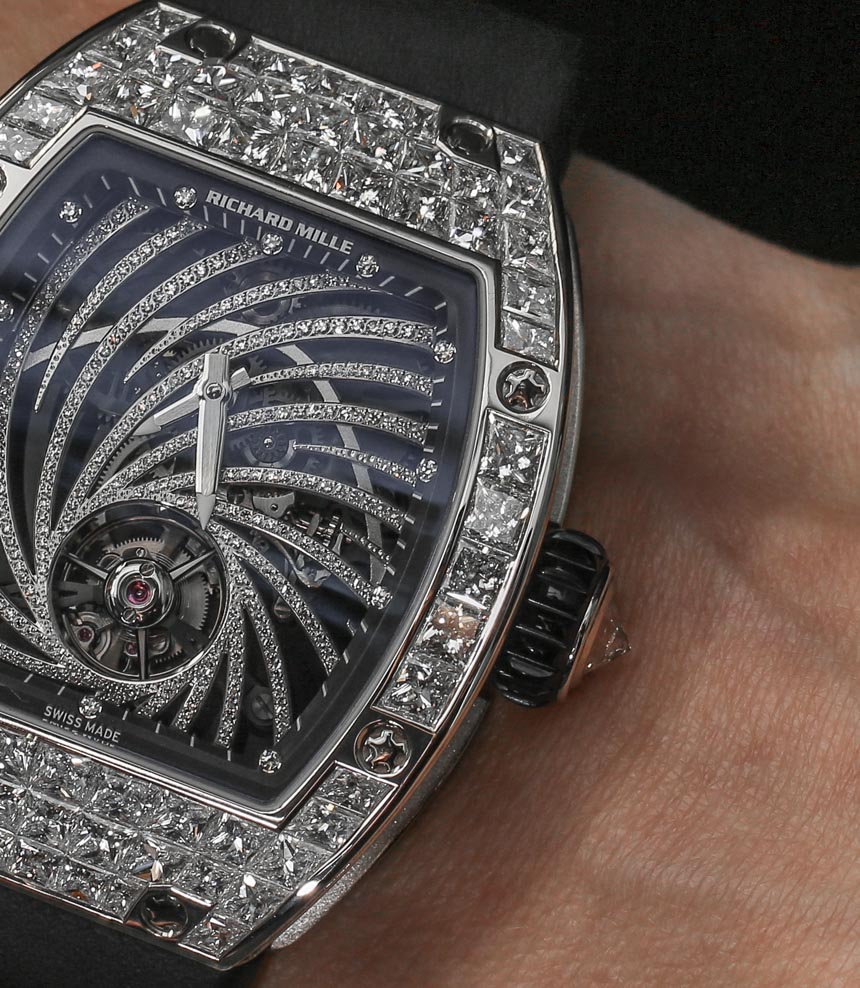 Yes, the Richard Mille RM 51-02 Tourbillon Diamond Twister is a timepiece that is within throwing distance of the magical million-dollar number (please don’t throw tourbillon watches). I’ll be the first to say that million-dollar watches don’t “need” to cost a million dollars, but that statement doesn’t tell the entire story. Even though Richard Mille and other contemporary luxury brands are making hefty margins from timepieces such as this, that doesn’t mean too many “better” or more decadent timepieces can be acquired for less money – at least, not at retail prices. So even though ultra-luxury timepieces come with hefty “exclusivity” premiums, brands like Richard Mille and Greubel Forsey can still look their customers straight in the eye and say that “you can’t buy stuff like this anywhere else.” 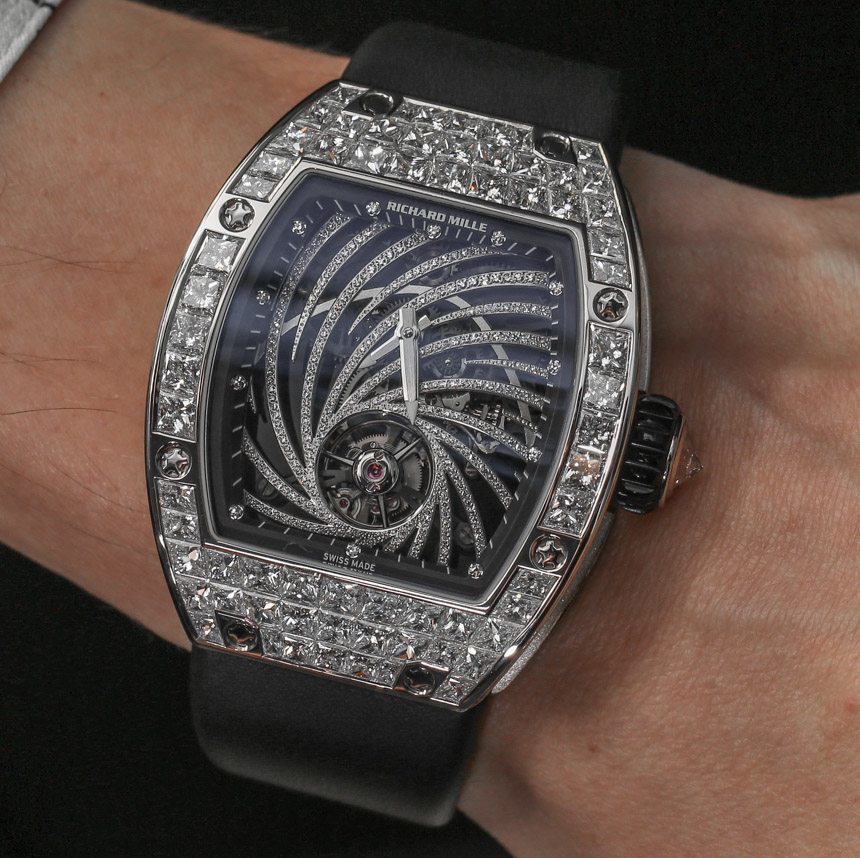 Richard Mille is such a masculine brand that, in theory, their women’s watches don’t make a lot of sense. How exactly do you get “girly” or “feminine” from a watch borne out of “inspiration from high-tech auto racing?” Well, the truth is, you don’t, but that doesn’t mean Richard Mille doesn’t make some really interesting women’s watches. They just don’t happen to be particularly girly. Rather, I would call them “stately and built to impress…” 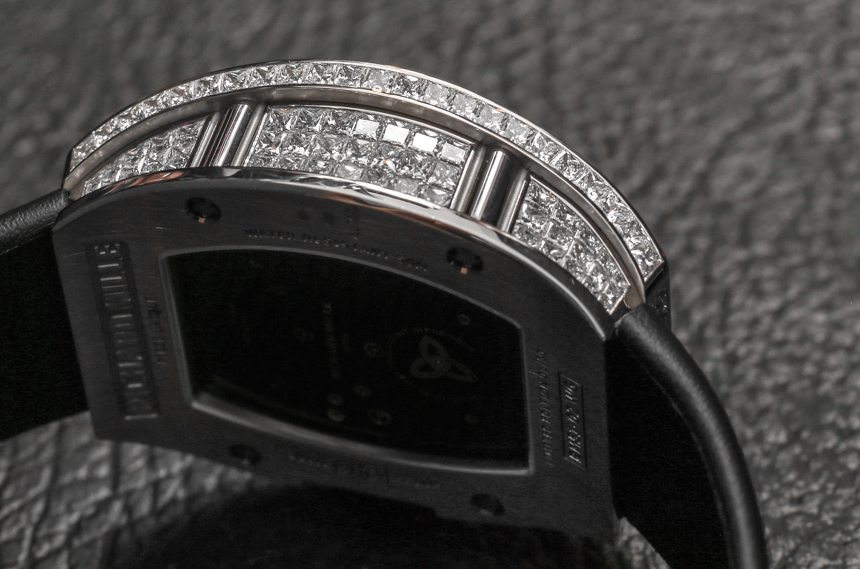 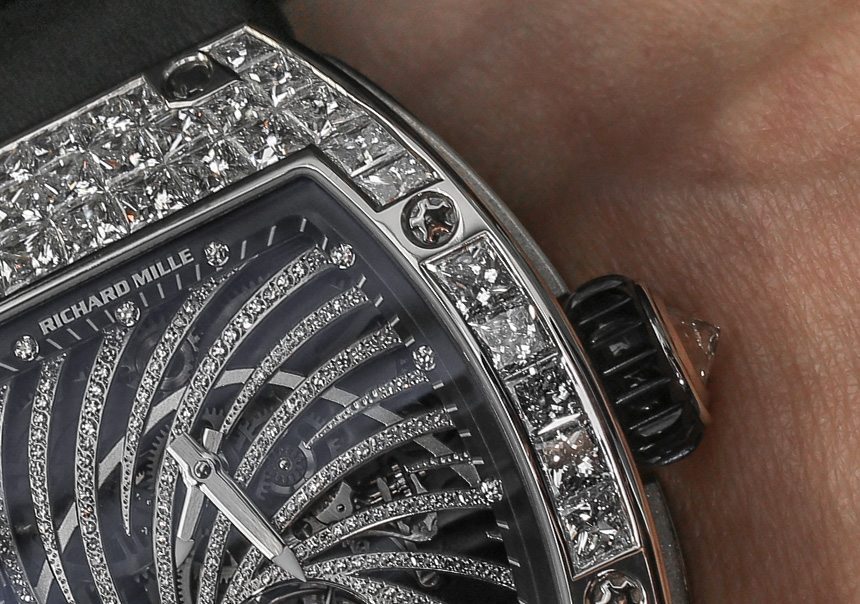 The first Richard Mille women’s watches that I recall seeing had diamond-decorated Celtic-style designs on the dial, and there was some relationship with Natalie Portman as a brand ambassador. Since then, a host of women’s Richard Mille watches have come into being, each decadently free to be extravagant and unorthodox in both design and functionality given the extreme prices of them all. When you are in the business of producing lavish mechanical jewelry for the elite women of the world, your goal should be to awe and not to be too familiar. Think, for example, of the last Richard Mille women’s watch we covered on aBlogtoWatch which was the RM 19-02 Tourbillon Fleur (hands-on here). 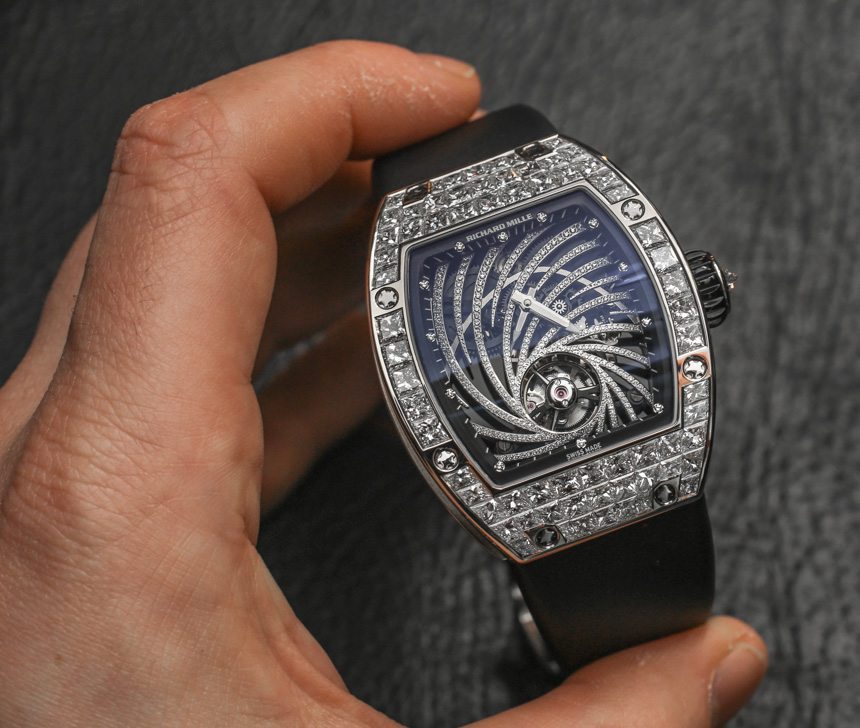 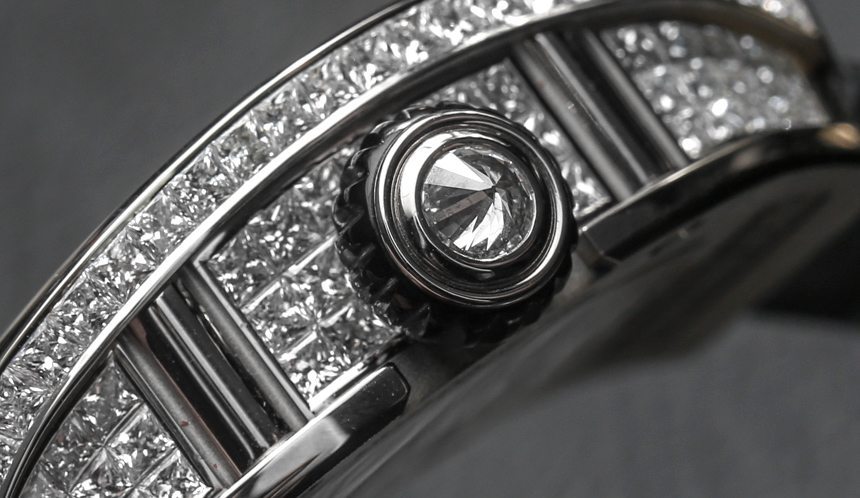 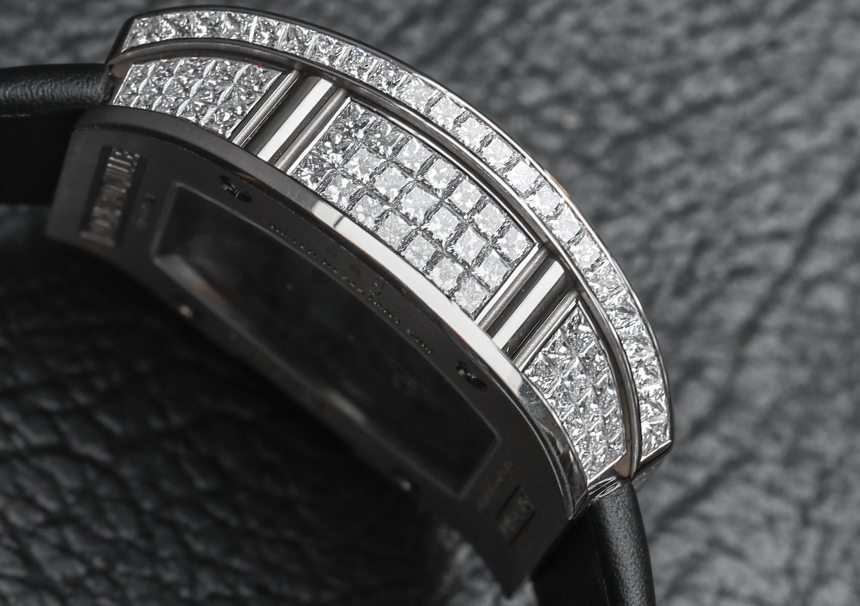 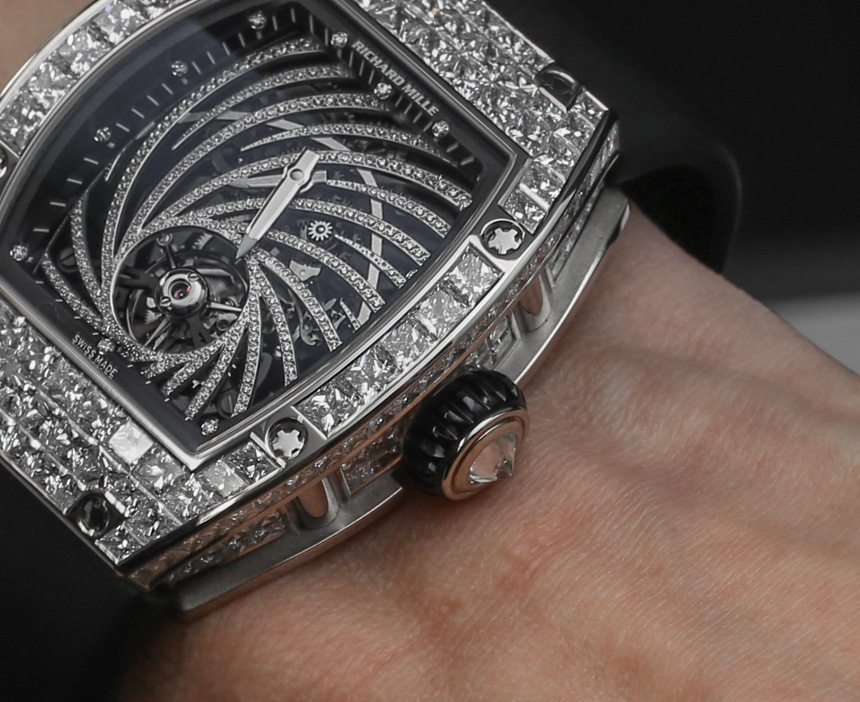 Of course, Richard Mille also decorates most surfaces of the case with set diamonds, and it is really here where the majestic size of the Richard Mille RM 51-02 Tourbillon Diamond Twister case finds the most value. There is just so much available space for the large baguette-cut stones on the bezel and sides of the case. While brilliant-cut diamonds tend to be more feminine on a watch case, I often find the more angular “strong” look of baguette-cut stones to be more masculine. This version of the Richard Mille RM 51-02 Tourbillon Diamond Twister could go either way in terms of its gender appeal, but it is the dial which for me seals the deal for this timepiece as intended for women. 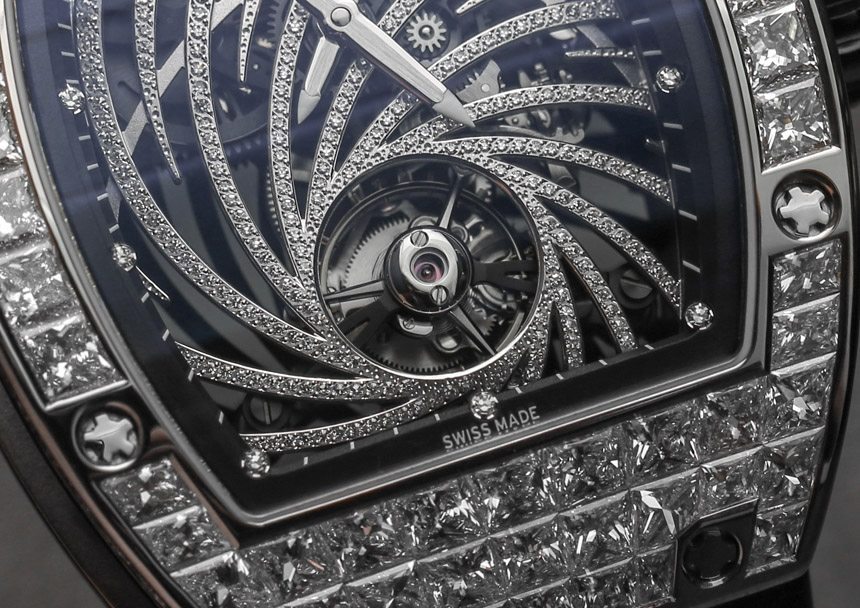 On the dial, you’ll find the “diamond twister” part of the watch name, as the titanium bridges form a series of concentric spirals that lead in to the tourbillon window. The dial is marvelously deep with a view into the movement. Each of the “spiral bridges” is fully set with a row of diamonds, and the dial for the time is eccentrically placed in the upper center of the dial. The smaller hands and placement of the diamond hour markers around the periphery of the bezel can even make the hands hard to see. Let’s just say that this isn’t Richard Mille’s most brilliant attempt at pure horological legibility. 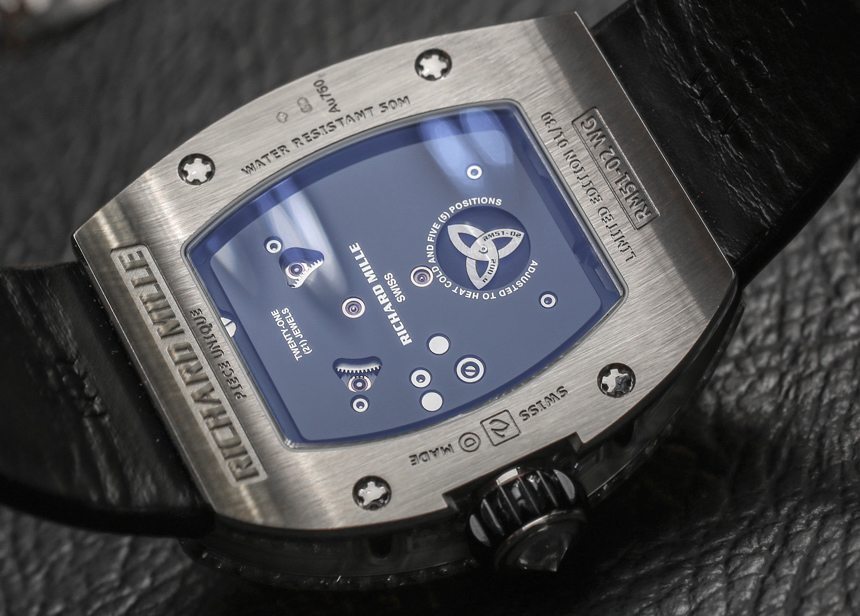 The movement in this and most other Richard Mille watches is based on the name of the model, so it is the caliber 51-02. The movement offers the time with hours and minutes, as well as seconds via the tourbillon. It operates at 3Hz (21,600bph) with a power reserve of probably about two days. Richard Mille is funny for offering huge amounts of information about their watches that most other brands don’t – which is good – but also leaving out a lot of useful information. It gives them some character for us watch journalists… 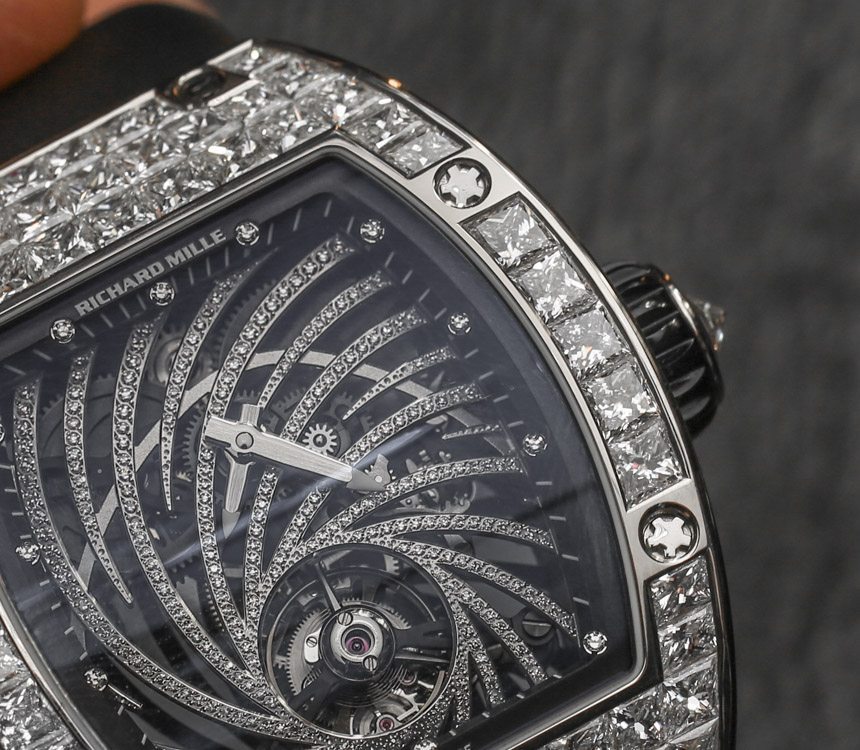 Richard Mille claims enormous amounts of time and effort that go into producing their watch movements and cases. I will agree that upon close inspection you can easily notice a volume of fine details and elements which are very time-consuming. Whether or not that is worth the huge premium in price is something that is ultimately up to each consumer, but Richard Mille most certainly does fulfill their promise of exclusivity.