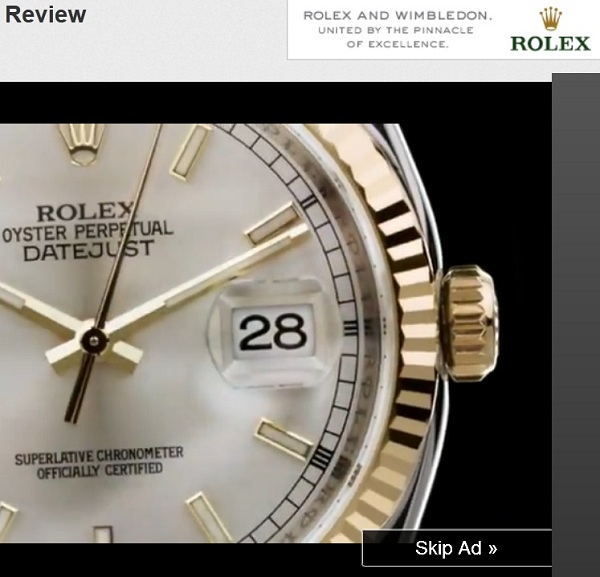 Rolex – probably the world’s top luxury marque – has decided to put a segment of its venerable advertising budget into YouTube, the major online video sharing website. Rolex is known (perhaps famous) for its healthy, but finicky advertising budget. It is also widely known among watch writers and journalists to be a brand that rarely speaks with any type of media in regard to their products. Fanatically protective with their image and market, Rolex’s participation with YouTube as an advertising partner is interesting to say the least.

Google, which own YouTube, has implemented a range of ad formats on the extremely popular website. Advertising on YouTube is mostly contextual and automated. This means that advertisements are matched to videos that are contextually or demographically related to the advertisement. YouTube of course an innumerable wealth of content and probably billions of daily video views that can host advertisements. However, YouTube does not place advertising on all types of content. Users who upload videos to the service must be invited to be part of YouTube’s partner network before any content can be ad supported. This helps ensure that videos which may appear after or near ads meet certain legal and quality standards.

YouTube advertiser promote everything from pet food to video games, and everything in between. Though luxury brands have likely been hesitant to work with the video sharing site because of how advertisements are placed. This is mostly due to how luxury brands tend to choose ad placements. As I mentioned, on YouTube ads are placed contextually and automatically. This means that while there are plenty of filtering options to choose from, an advertiser only chooses the type of video their ads will appear with, not the exact videos themselves. The system is very similar to Google Adwords, which operates in a similar manner but with text and banner ads on websites. Though YouTube’s advertising program more than likely only involves videos hosted on YouTube’s website. Ad formats include pre and post roll video ads (before or after the videos people are trying to view), as well as graphical banner ads which sit next to video player boxes.

My own YouTube channel (aBlogtoRead), is a YouTube partner and has well over 300 videos most all related to timepieces. I was recently watching one of my own recent videos and was extremely surprised (and of course happy) to see a Rolex pre-roll ad with an adjacent supporting banner ad. The enjoyable sight was surprising given what I know about Rolex’s highly conservative marketing policies. There was a full-length commercial celebrating Rolex’s relationship with Wimbledon. I actually saw the same video recently uploaded to Rolex’s own official YouTube channel that was formed a few months ago (also to my surprise). 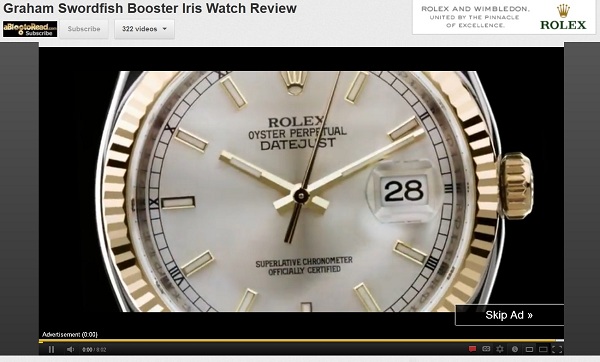 Why is all this important? First, it heralds YouTube as being a serious destination for luxury advertisers – many of whom are extremely hesitant or at least unfamiliar with internet advertising. With Rolex participating as a YouTube advertiser, it will no doubt be a signal to other high-end watch brands that doing so is an appropriate or perhaps wise idea. The wrist watch industry to a large degree has a “follow the leader” type of culture. Second, it acts as supporting measure to further legitimize the internet as a prime luxury advertising destination. This is not the first time Rolex has engaged in an internet advertising campaign, but such a potentially widespread campaign on YouTube will attract the attention of many consumer and Rolex competitors.

It also helps defeat the concept that “if we don’t sell online, why should be advertise online.” Many luxury and watch brands do not sell over the internet at this time for a variety of reasons. They use this fact as a reason when citing why they don’t participate in internet advertising campaigns. Though this has always been a perplexing rationale because you can’t buy a watch in a magazine or newspaper either – which represent most of the print publications that many watch brands are used to advertising in.

Last, the news of Rolex advertising on YouTube is a sign that luxury brands can perhaps relax their conservative stance on ad placements. It has often been felt that the location of an advertisement is as important or more important than the marketing message itself. This debatable concept has kept luxury ads in mostly the same type of “sanitary,” and often low circulation publications. With the video hosting site’s contextual placement of ads, Rolex has not only said that a venue like YouTube is appropriate for their brand, but they have also opted to lose control of precisely what content their ads appear next to. This is perhaps the most important implication of the Rolex advertising campaign on the luxury marketing industry. This news shows that Rolex has certainly engaged in an innovative move, and in this situation chose the modern approach versus the traditionally safe one.