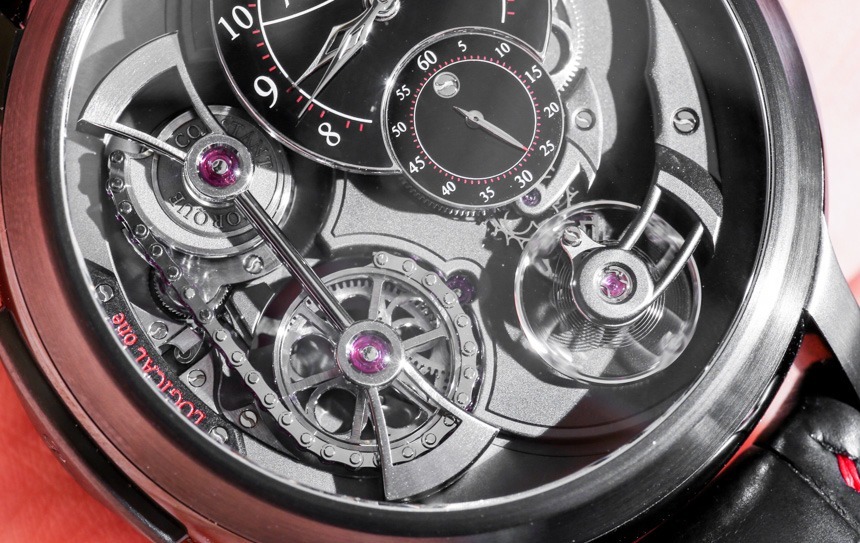 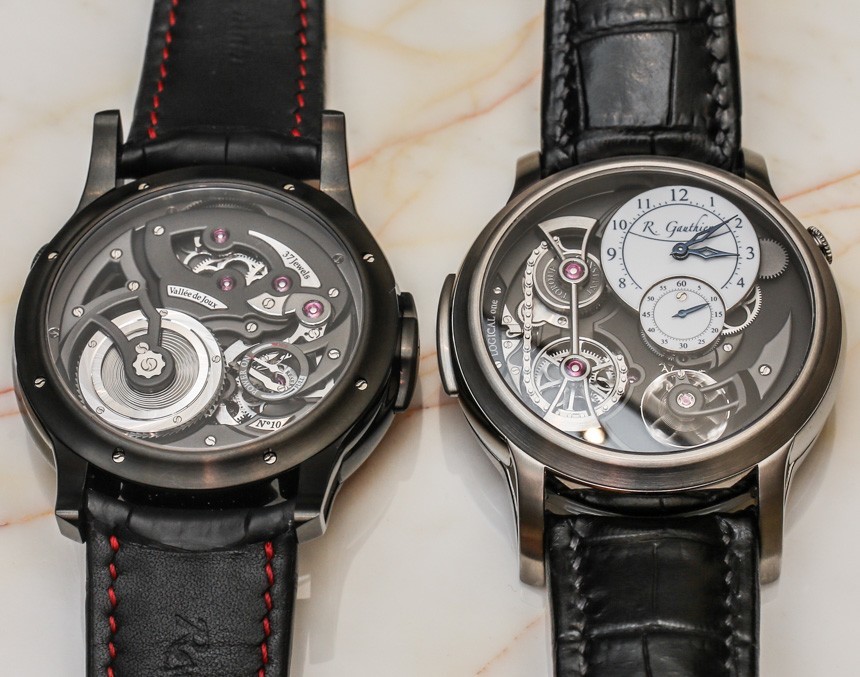 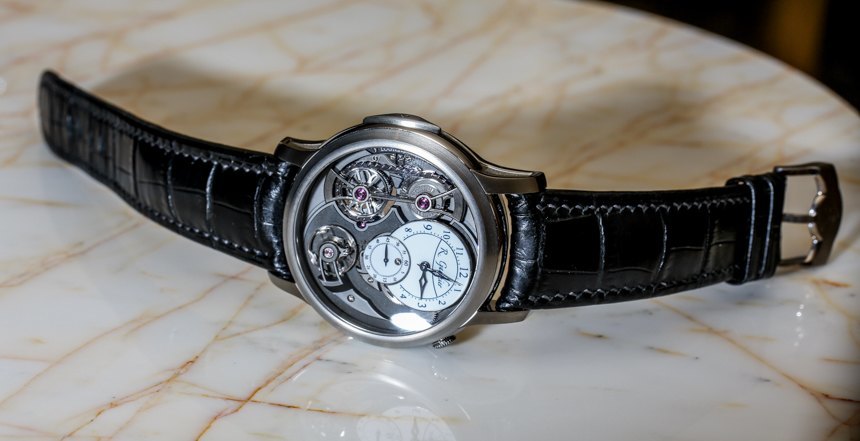 I didn’t even realize that this year R. Gauthier as a brand will be 10 years old. That same goes for MB&F – another independent high-end Swiss watch brand that people will probably be talking about much more. With that said, there is something extremely appealing to me about a company that makes a small batch of watches each year and is so hard to really learn about or see hands-on for yourself. Of all places, I met up with Romain Gauthier in Las Vegas. Holed up in a suite with his watches in relative silence like his native Vallée de Joux – he seemed more comfortable there than the totally “un-watch valley” Casino floor and crowded sidewalks on The Strip. 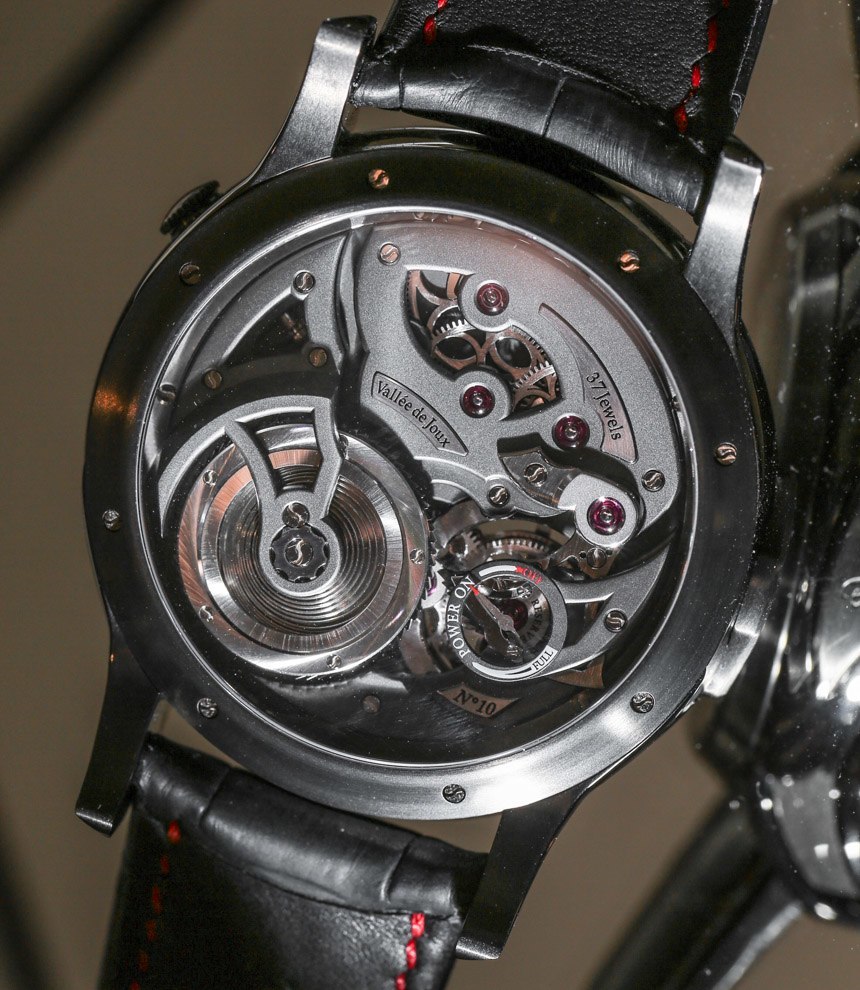 The history of the Vallée de Joux is fascinating and, outside of being rather famously boring (by today’s standards), is one of just a few “watchmaking regions” of Switzerland. I know it all too well, and it is where Romain was born. Gauthier is not a watchmaker by trade, but rather a micro-engineer. It is important to understand that today’s watchmaking world requires a range of special engineering talents to keep the industry running. Watchmakers are important, for sure, but engineers of various types are really the ones pushing forward when it comes to things like innovation and use of novel materials. Romain Gauthier was in the component production business using his skills to make tiny parts for watch movements. In fact, Romain still produces parts for other watch makers, but in his own words, his business making his own watches is steadily overtaking his role as a parts supplier. 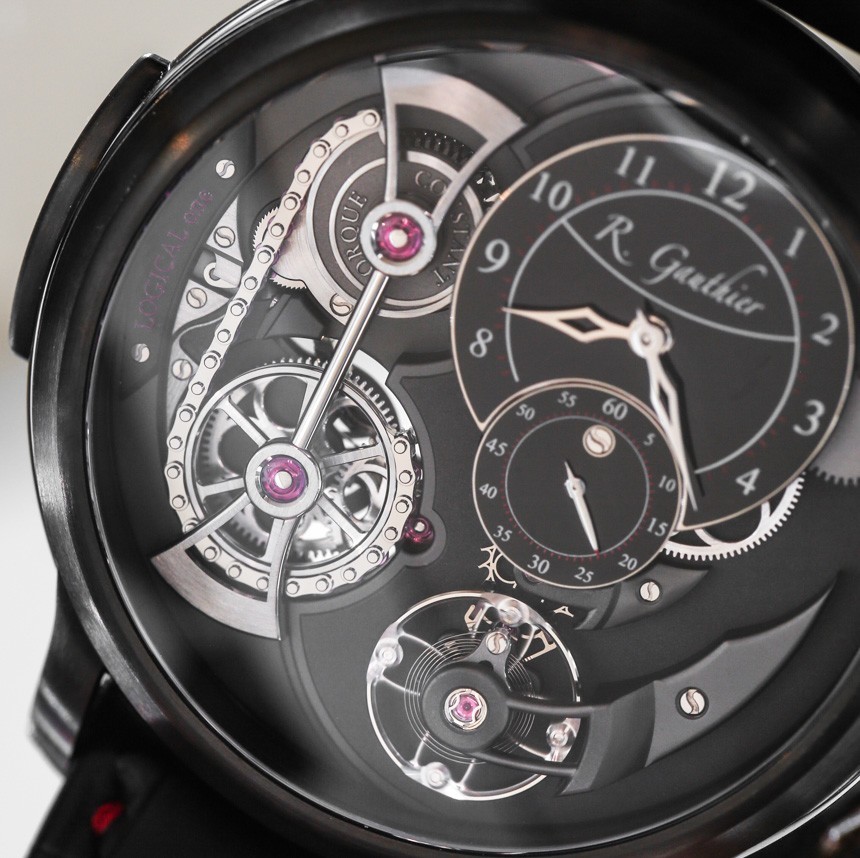 Being a supplier of parts to the watch industry is interesting, and often very profitable, but it isn’t particularly creative. Your job is to produce the parts companies order, and to do so with extreme precision. Anyone with an enterprising mind will quickly consider what they would be producing if they were the watch designer – and that is apparently exactly what happened with Romain Gauthier.

In the early 2000s, Romain decided to start his own watch brand. Like all good students of life, he understood that being able to produce small parts was not enough. He also needed to understand watches and in some senses, business. So Mr. Gauthier went to get his MBA, got it, and then proceeded to start R. Gauthier. I really didn’t hear much about the brand until about 5 years ago or so, but the brand’s true masterpiece came with the R. Gauthier Logical One collection. 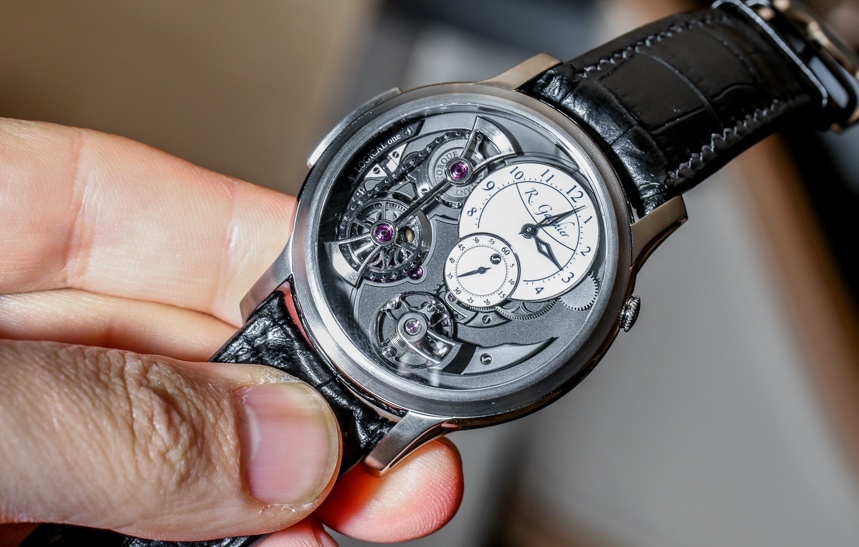 Romain Gauthier is the type of person who clearly respects the traditions of watchmaking – especially when it comes to design and decoration. With that said, what he takes with a grain of salt is how traditional watchmakers say a watch should operate. A good example? The R. Gauthier Logical One watch is wound with a pusher, not a turn of the crown.

In fact, Romain’s first watches were totally about redesigning how a crown was meant to work. Rather than a protruding object on the side of the case, he designed a new type of crown that sat as a disc under the case which could be easily and comfortably wound. The R. Gauthier Logical One actually has a traditional crown, but it is noticeably petite in size. That is because you only touch it when adjusting the time. It is also placed at 2 o’clock, which makes it rather out of the way, 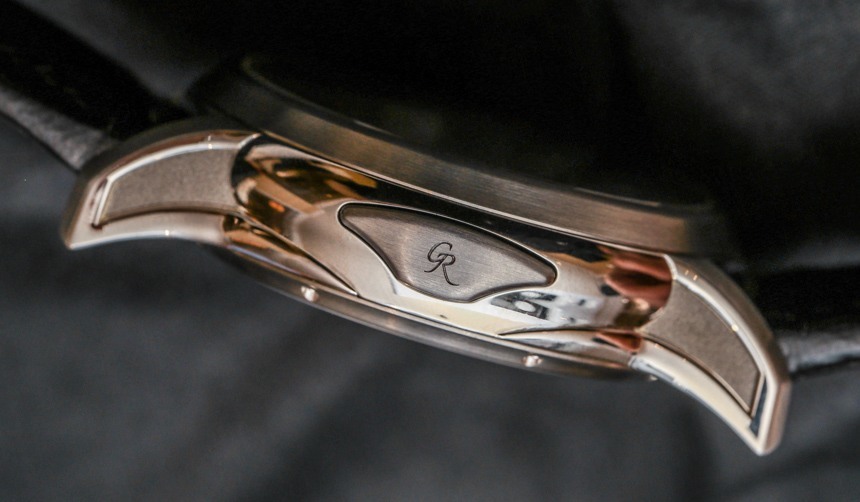 What wearers of the R. Gauthier Logical One watch will be interacting with is the large, nicely designed pusher on the left-side of the case. When depressed, this pusher activates a lever which applies force to the mainspring barrel, turning it. The barrel uses the traditional locking system so that it does not spin back given all the force of the spring inside. This is an interesting and viscerally appealing way to wind a watch movement – and I am surprised that I’ve never see anything like it before. 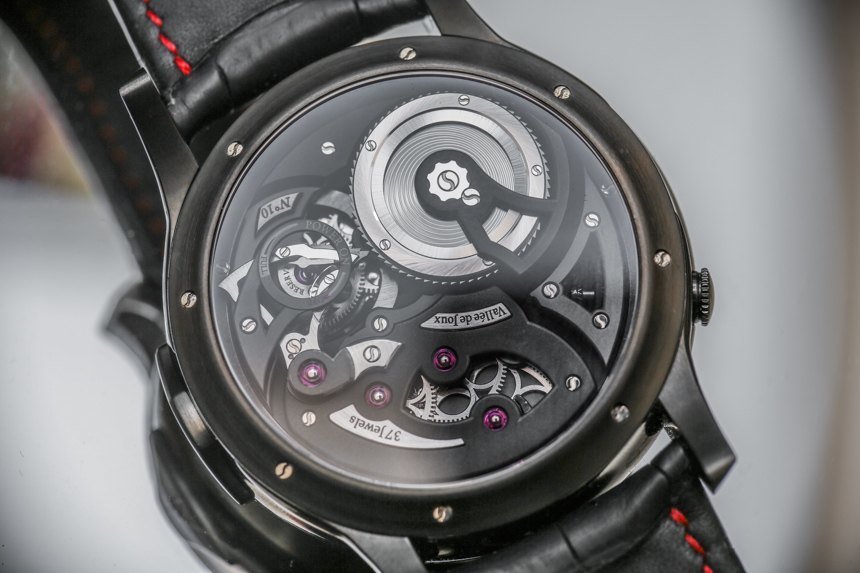 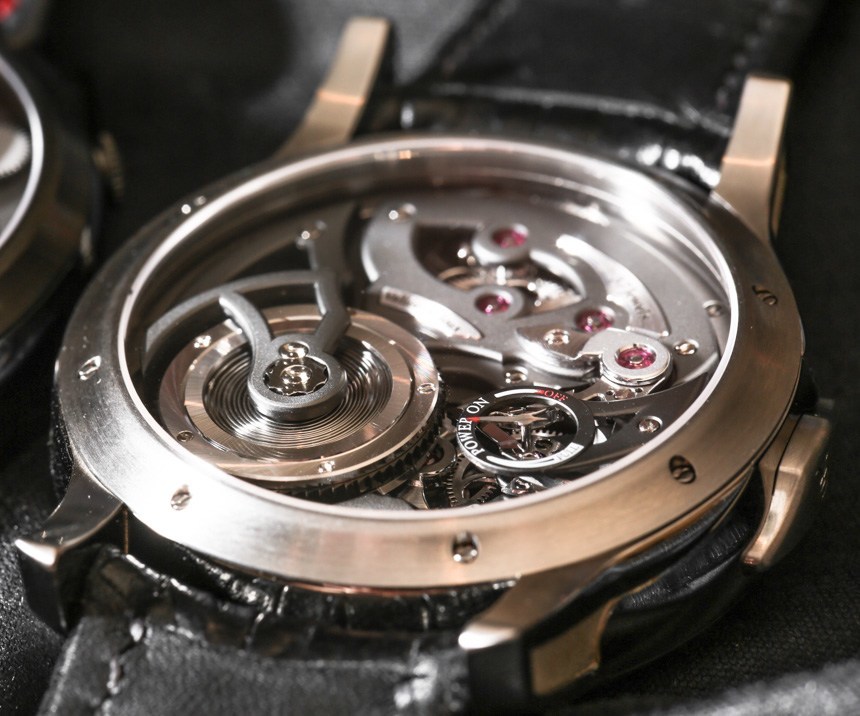 There are numerous engineering enhancements to the in-house made, manually would mechanical movement inside of the Romain Gauthier Logical One. One of our favorites is the use of sapphire crystal plates on the mainspring barrel. Not only do these offer additional wear-resistance compared to metal, but they also offer a view of the spring in the barrel. Adjacent to it is a power reserve indicator, and the movement has a total of 46 hours of power reserve, running at 4Hz. 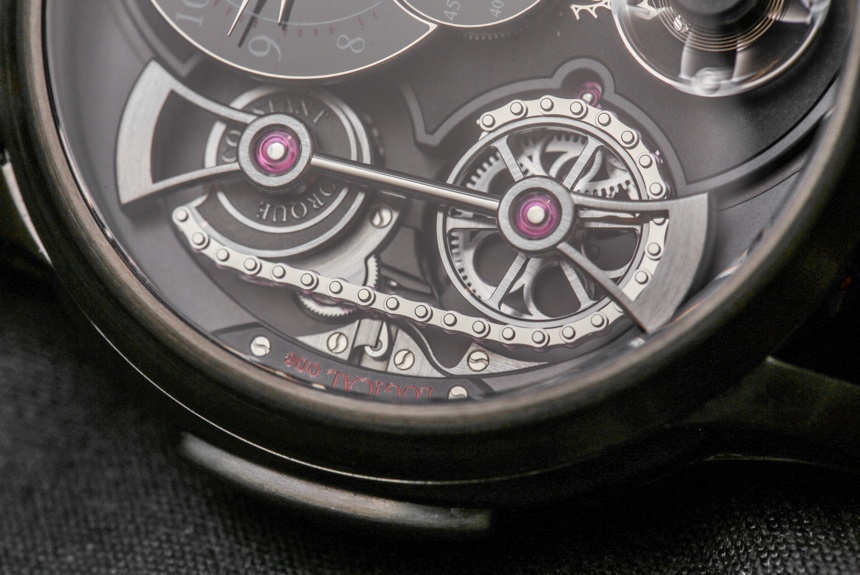 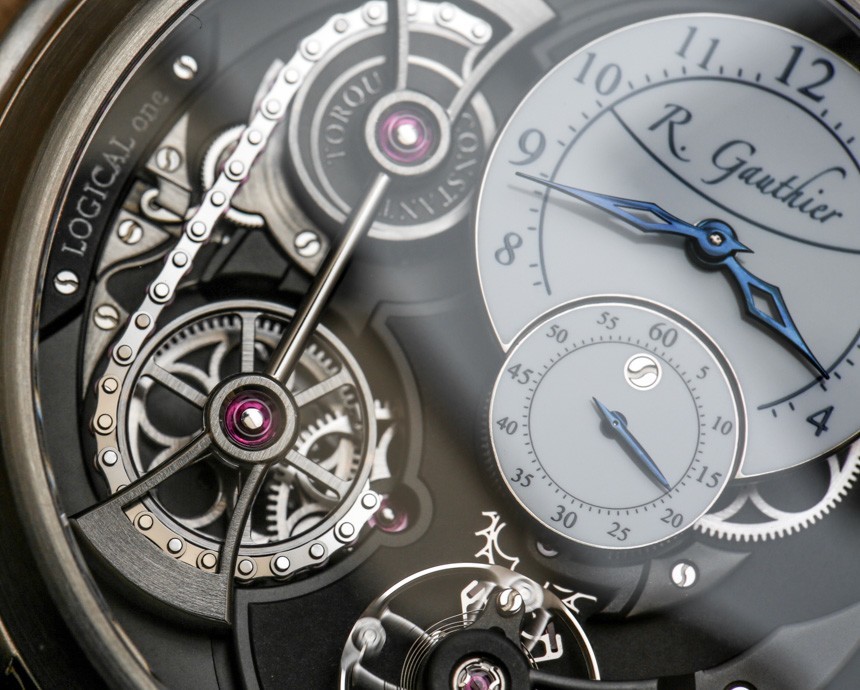 Romain Gauthier says that four patents are applied to the movement inside of the R. Gauthier Logical One. I am pretty sure at least one of those applies to the novel fusee & chain system which is a bit different from the conical ones you’ll see in some other rare watches. Romain Gauthier uses a snail-shaped cam as well as synthetic rubies as links in the chain. When the Romain Gauthier Logical One first came out, this was a major “wow” because not only did it look super cool, but it represented a very clever use of rubies in a movement. 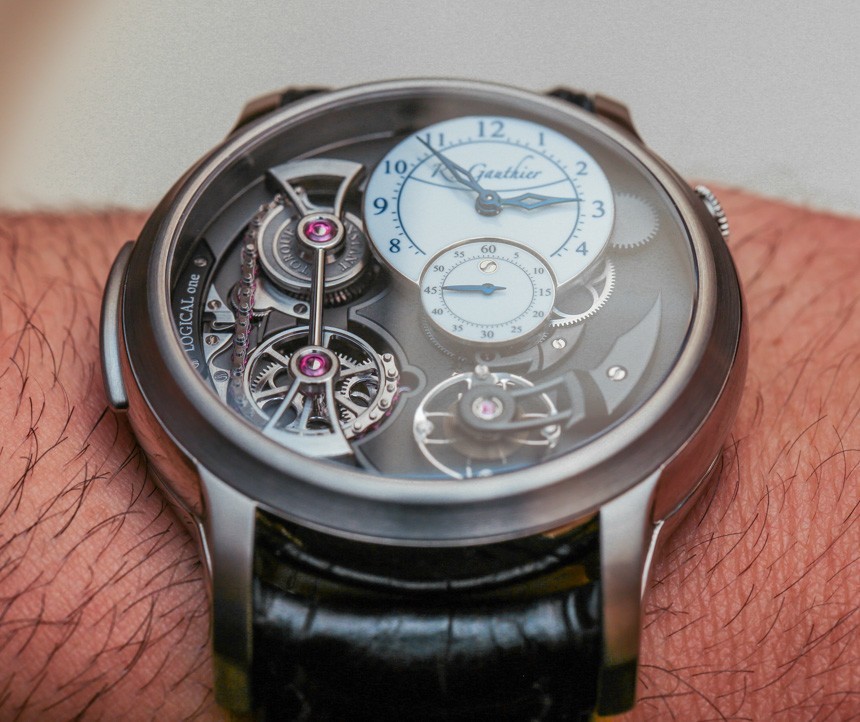 The original pictures of the Romain Gauthier Logical One had the rubies in the chain stand out a bit more. In reality, you can see them, but there isn’t as much of a red splash on the dial. What happened was that Romain Gautier needed to increase the size of the metal links to make the chain stronger. Overall, this is an engineering improvement, but sadly, you don’t have what might have been a spectacular view with large ruby links in the chain. 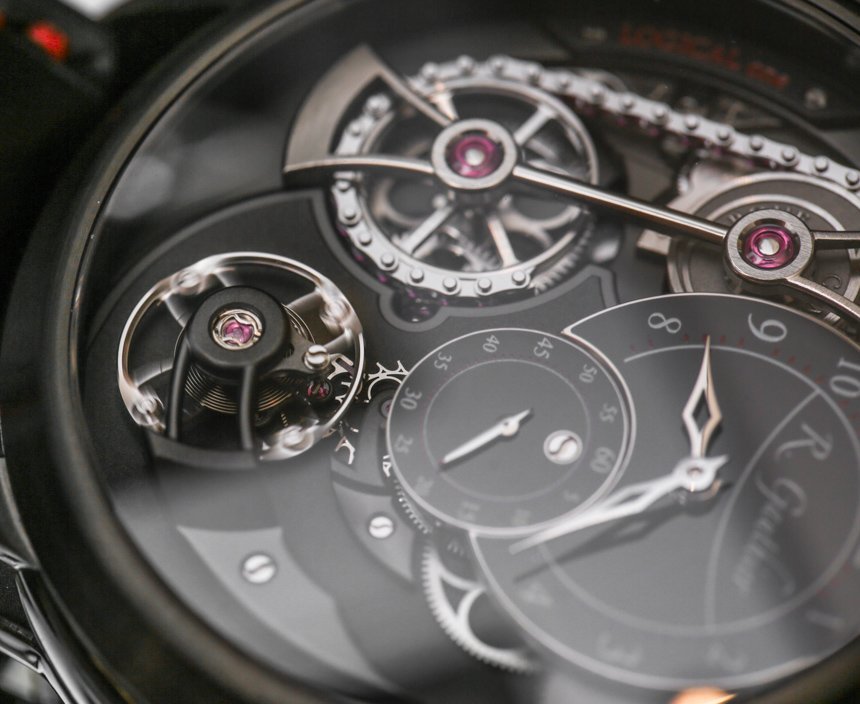 The chain is part of a transmission system that moves power from the mainspring barrel to the gear train of the movement. The idea is that it acts to ensure a consistent amount of force. Mechanisms such as this are very historic and have been around for a long time. Some modern watches feature fusee & chain systems, but none are as forward thinking (in my opinion) as what Romain Gauthier was able to achieve. The best part is really how wonderfully visible it is on the dial. 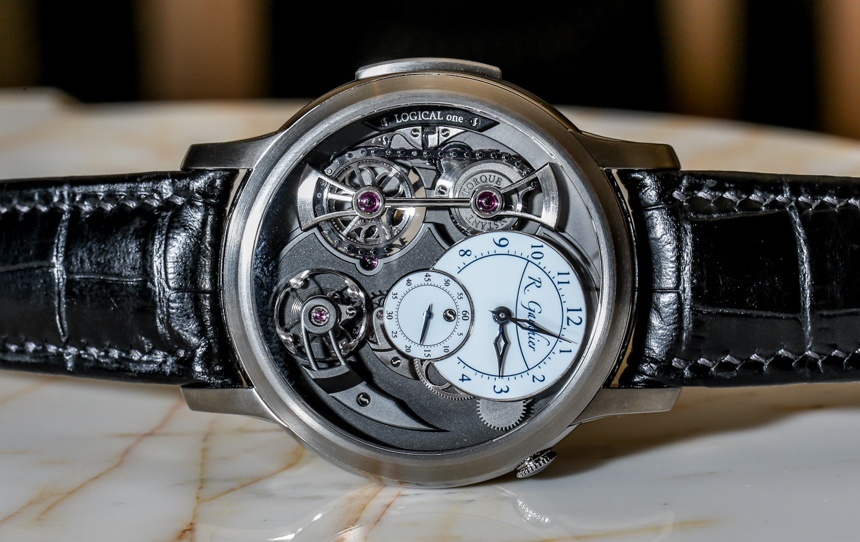 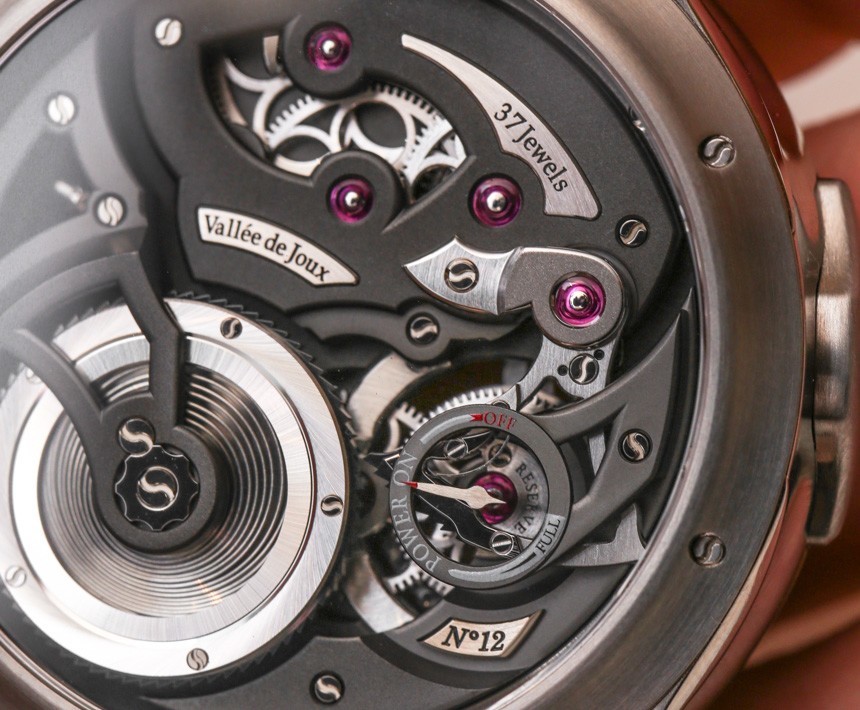 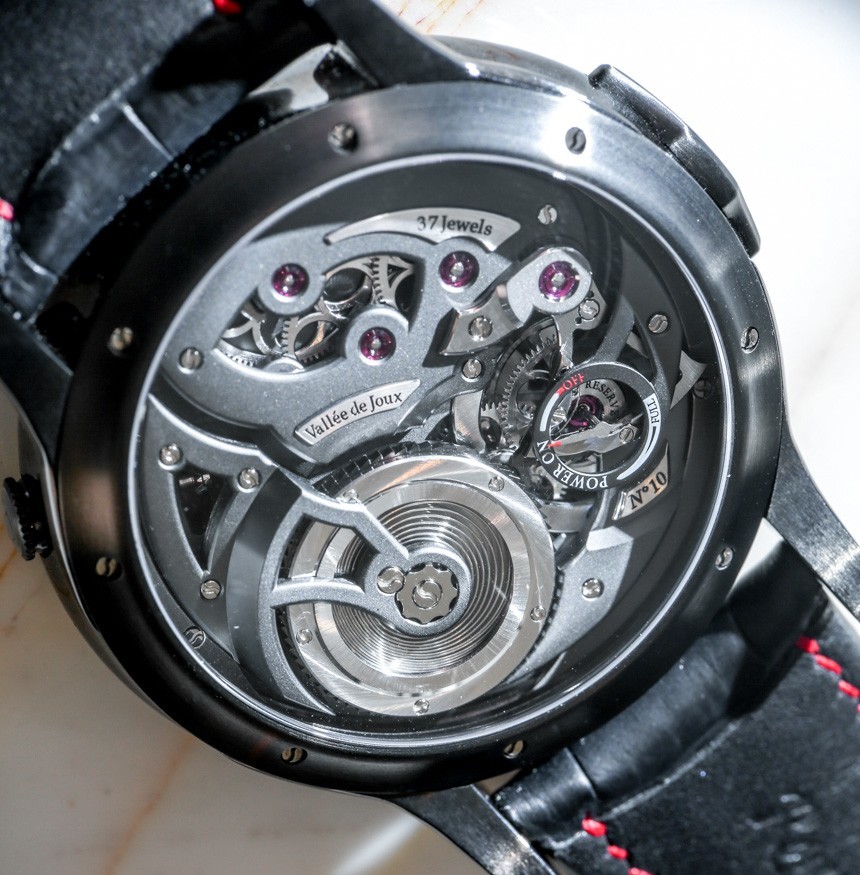 One minor issue in the watch was some reflectivity in the sapphire crystal – and this is very common. The R. Gauthier Logical One uses a domed sapphire crystal with AR-coating on the bottom. Most watch makers won’t put AR coating on the top of the crystal because it looks terrible when it scratches off. However, unless the domed crystal is produced perfectly, it results in glare. In my opinion, any reflectivity at all on a watch dial is something to be avoided at all costs. So this is a super minor issue, but if there were one area of refinement I’d like to see, it would be in Romain Gauthier looking for some new sapphire crystals to make them as perfect as the R. Gauthier Logical One watches deserve. 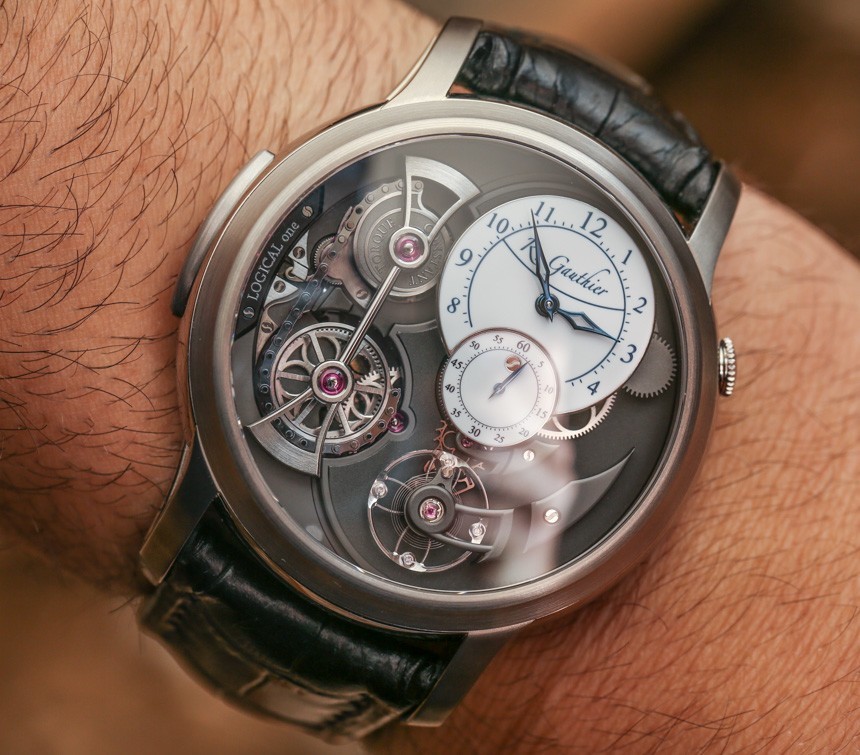 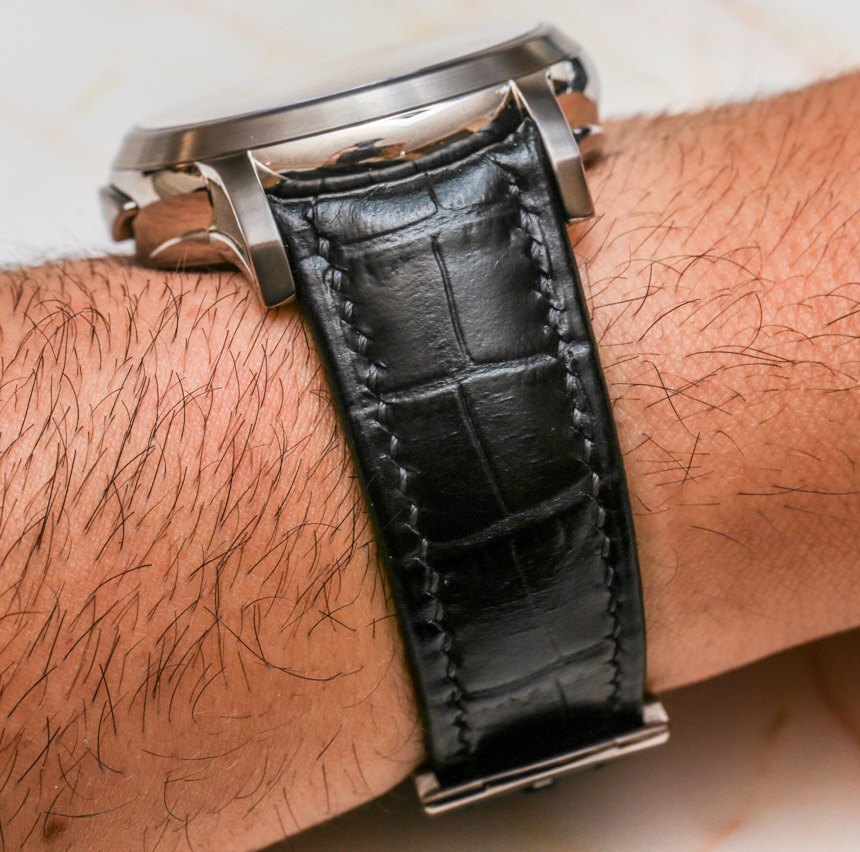 On the wrist, the Romain Gauthier Logical One watch is 43mm wide and 14.2mm thick. That isn’t small or terribly large – and I find it to be a very nice size. While the Romain Gauthier Logical One case is round, it does have some interesting angles and design elements which prevent it from being boring. Romain Gauthier offers the Logical One in 18k white or red gold, platinum, and also titanium. What you see here is the DLC-coated black titanium as well as a non production titanium version which has not been DLC-coated. Though, if you want it like that, it is rather likely Mr. Gauthier will oblige. 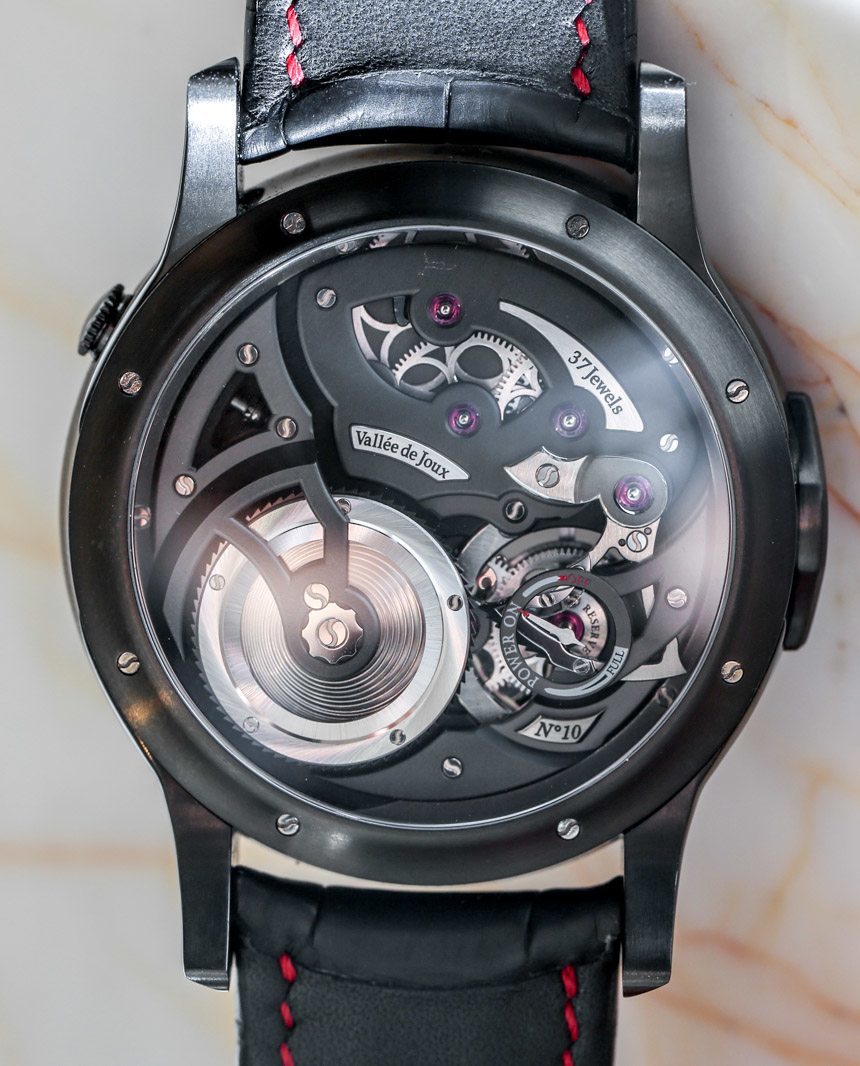 Sure spoken but quiet, Romain Gauthier has the presence of a clever engineer who doesn’t quite get how modern marketing fits into the world of watches. He, like so many others, does all this for the passion. There are men and women like him, and they make up the best of the watch industry. In some regards, while their personalities and products are different, there is something about Romain Gauthier’s work and watches that reminds me of Francois-Paul Jounre (F.P. Journe) – another modern master…. and maverick. 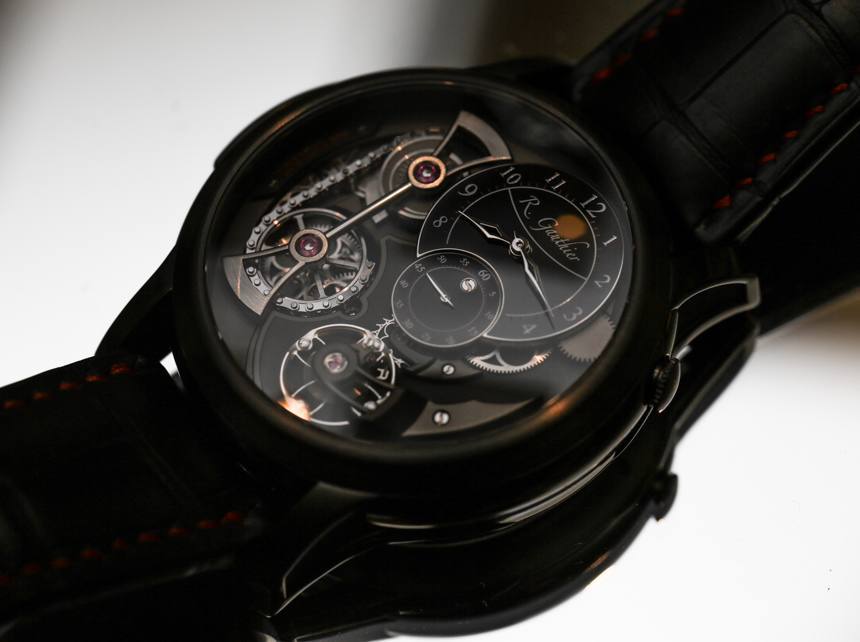 The Romain Gauthier Logical One is a stunning timepiece with some brilliant design elements and no luxury lifestyle marketing fluff. This is the type of brand and watch that, as a passionate watch lover, you have to stumble across, and if it catches your interest, you’ll find something to be really impressed with. Price in titanium for the R. Gauthier Logical One watch is $98,000. romaingauthier.com