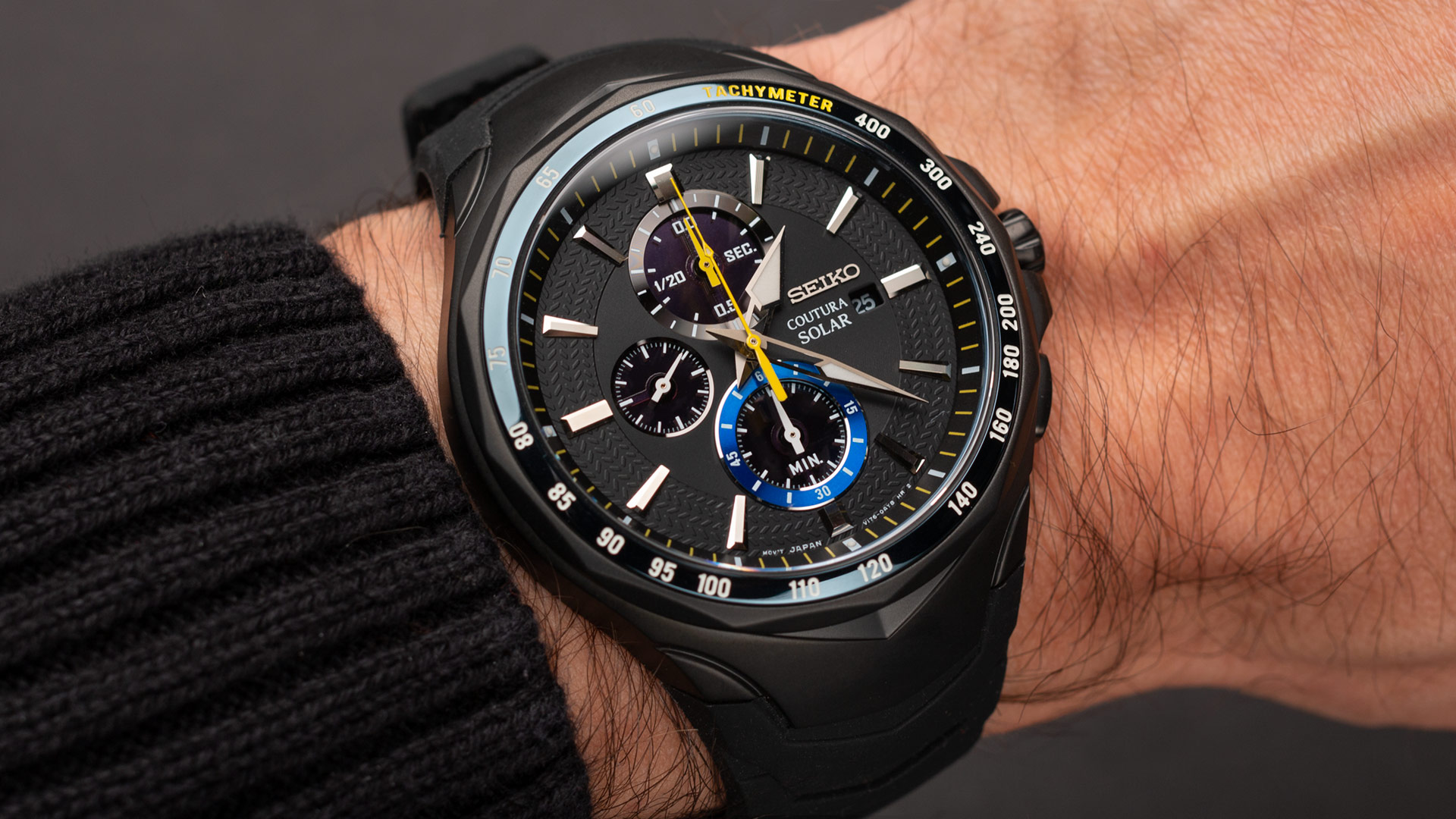 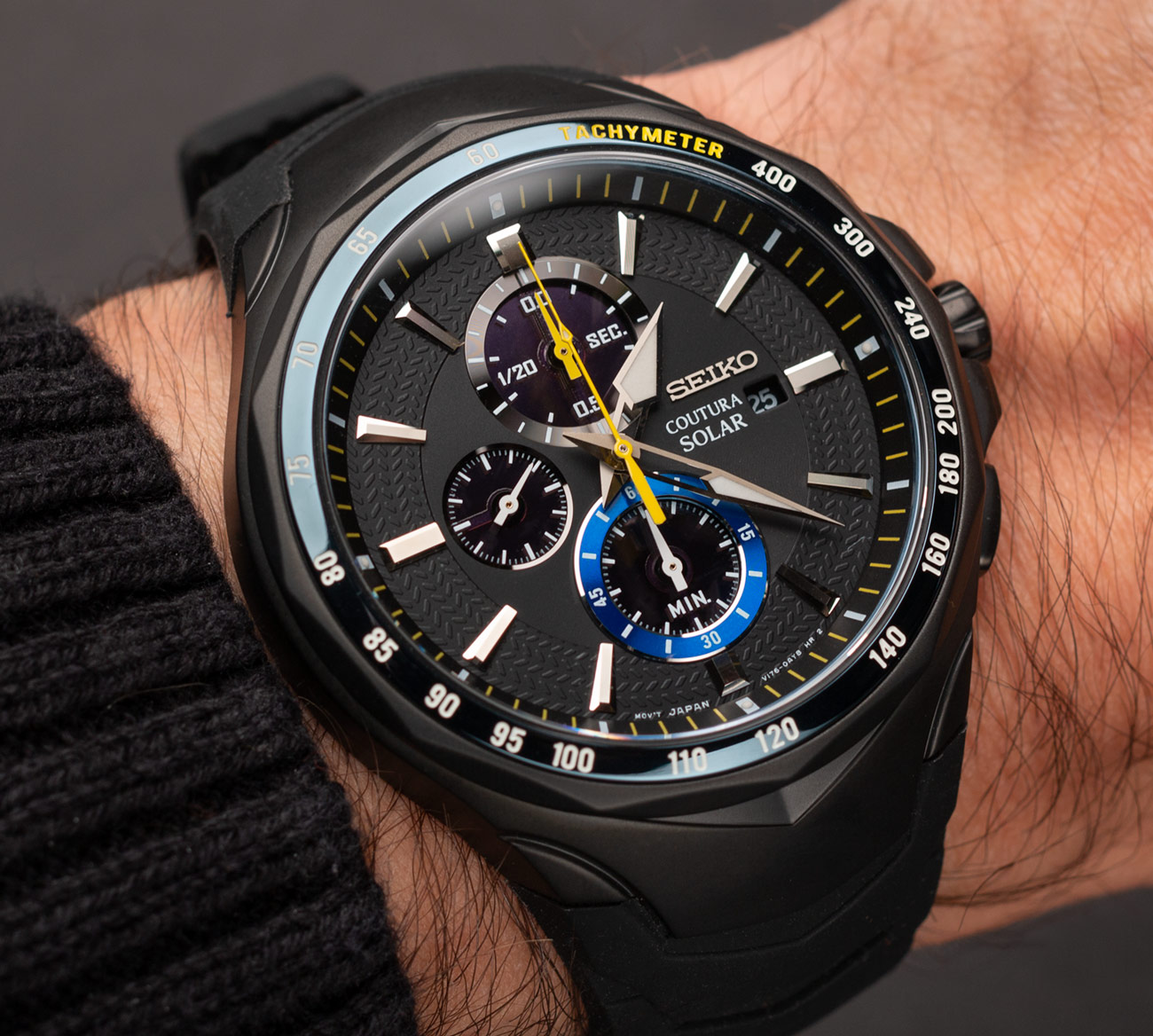 Cars more often inspire watch designs, but cars based on watches are uncommon, to say the least. That, however, is exactly what Seiko invited me to see recently in New York at an event unveiling a Chevrolet Camaro SS car which had been customized to match the Seiko Coutura Solar Chronograph Jimmie Johnson Special Edition watch. We are mostly going to discuss this affordable solar-powered chronograph watch which I have also had a chance to wear and photograph, but I think the “Coutura Camaro” is interesting since it is unusual as well as fun for car fans. 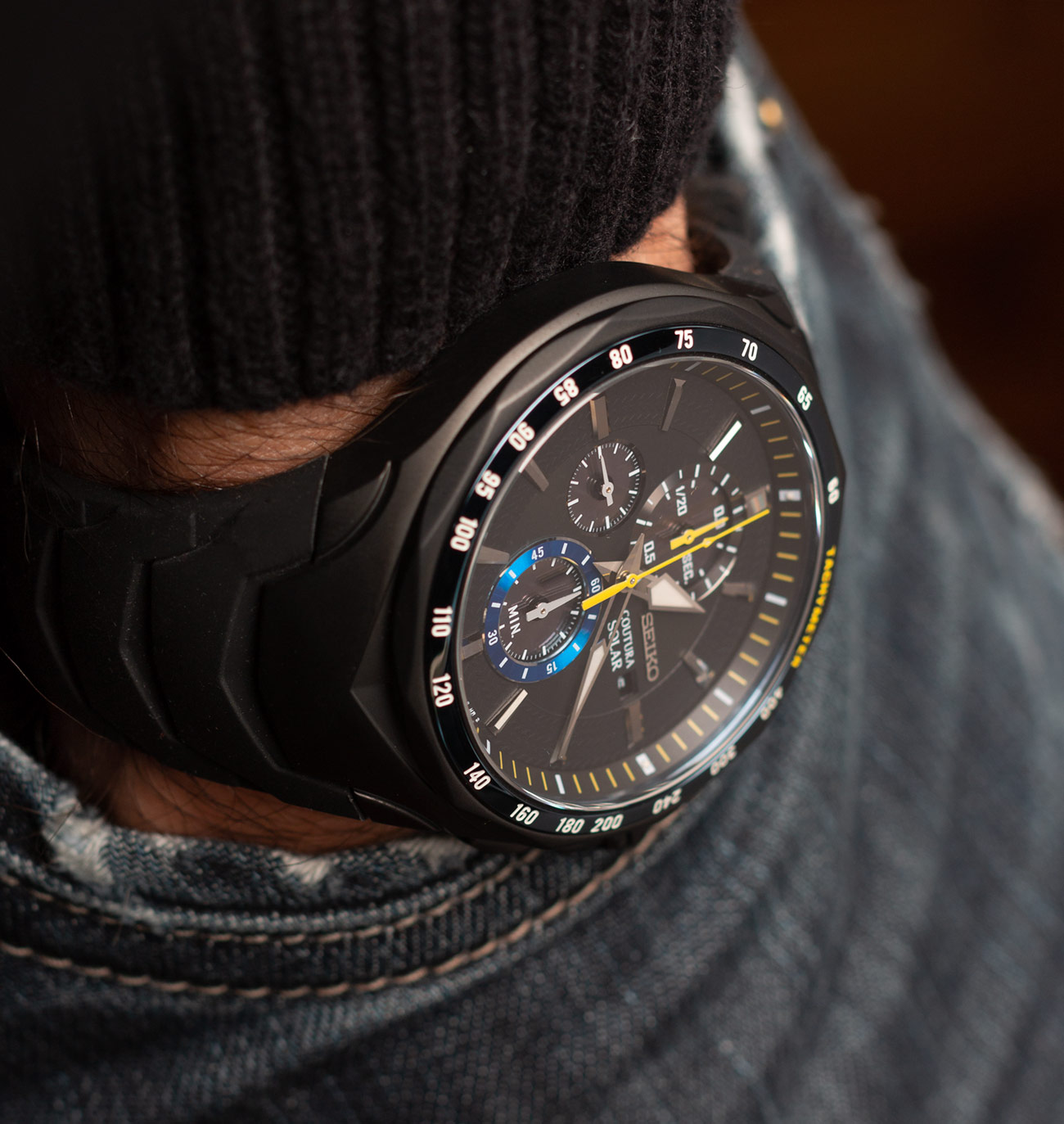 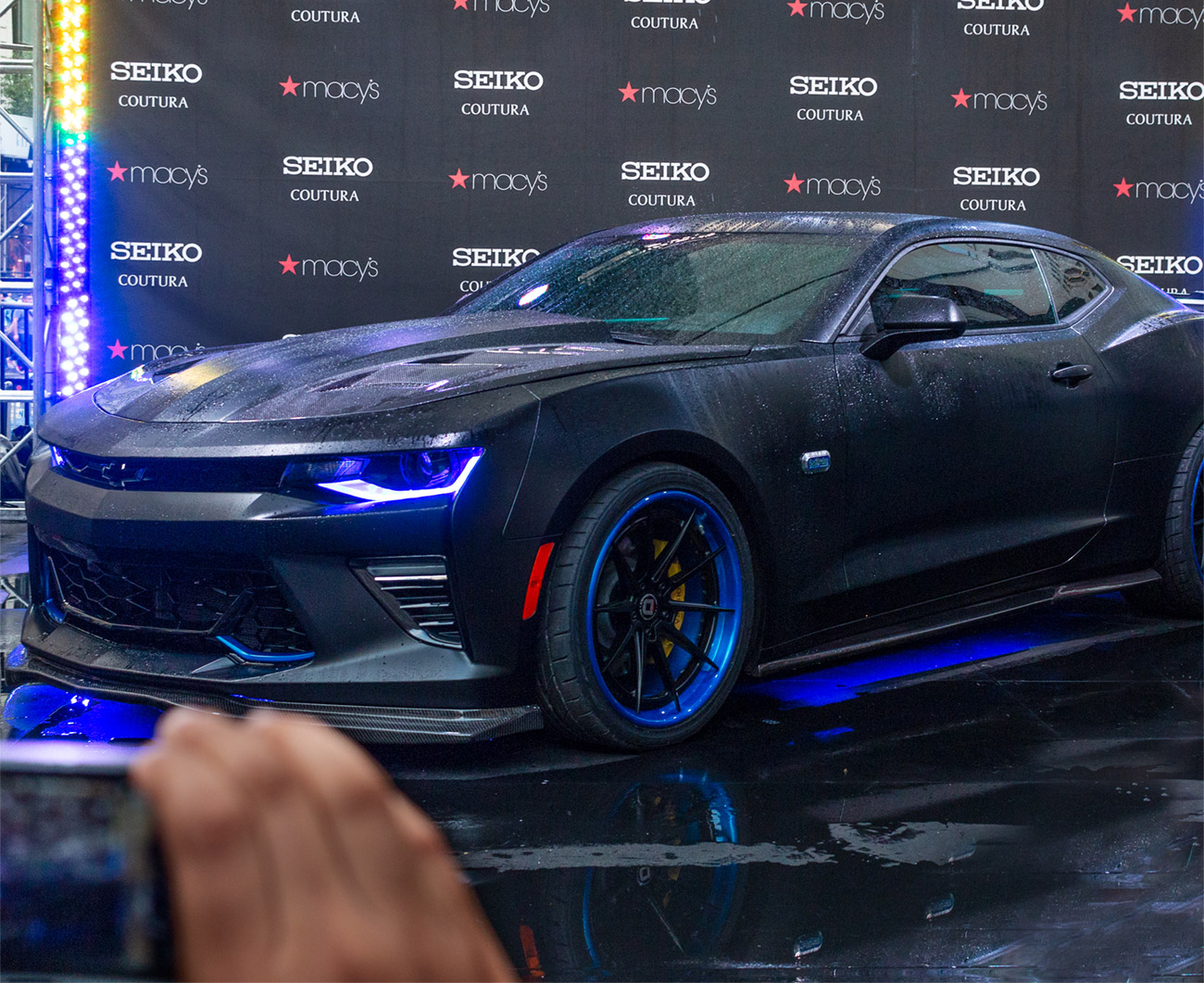 The Seiko Coutura Solar Chronograph Jimmie Johnson Special Edition watch, we are told, was designed by car racing champion and Seiko brand ambassador Jimmie Johnson. I’m not sure if he did more than to choose the colors and textures for various elements, though I believe the particular layout and feature combination of this model is unique among the Coutura collection – but we will return to those details shortly. Then, based on the Jimmie Johnson watch, Seiko got TV celebrity and founder of car customizing shop Gas Monkey Garage (famous from his TV show), Richard Rawlings, to design, customize, and build the Coutura Camaro. Both celebrities were at the event to introduce it and take pictures with fans. 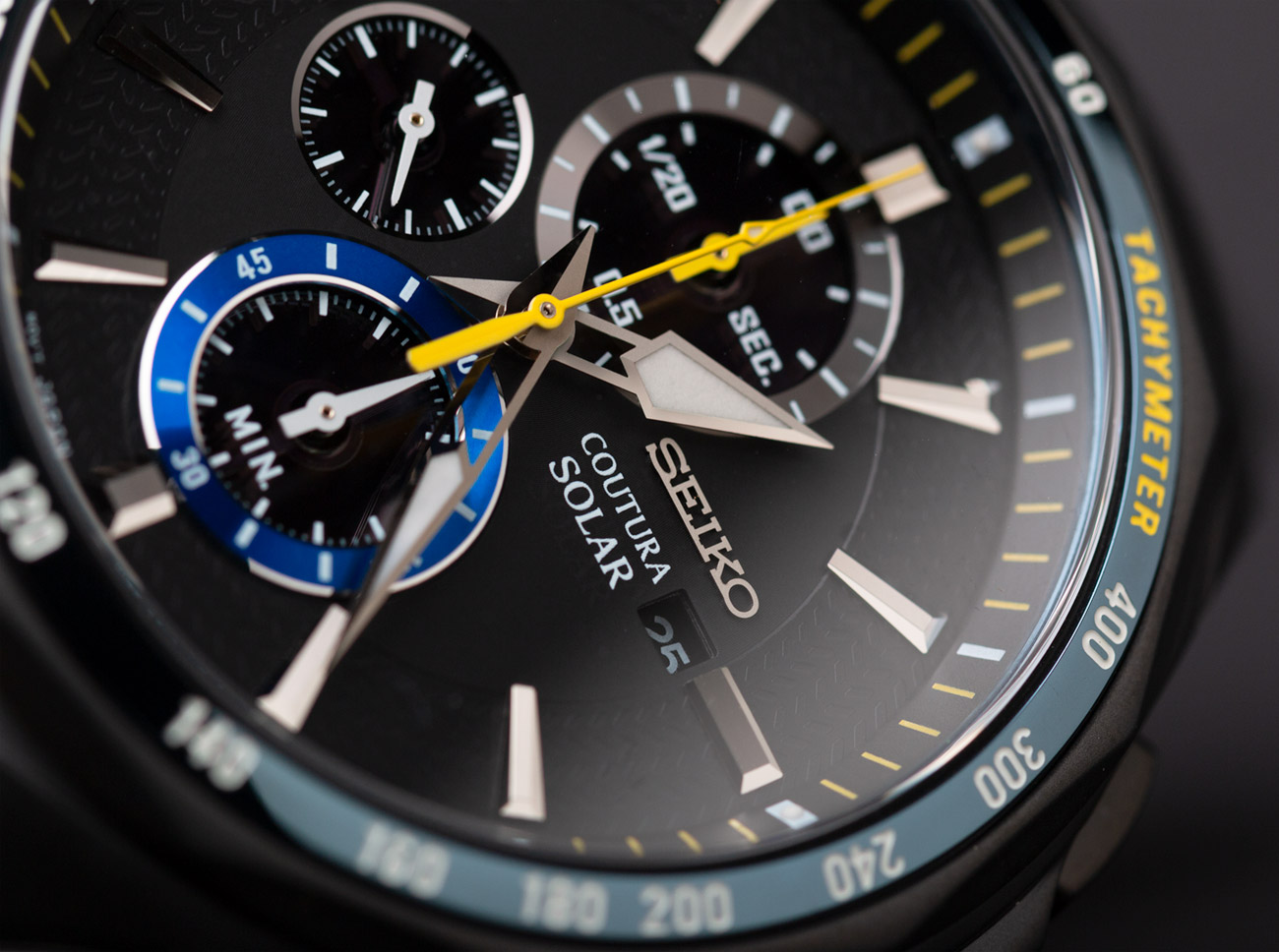 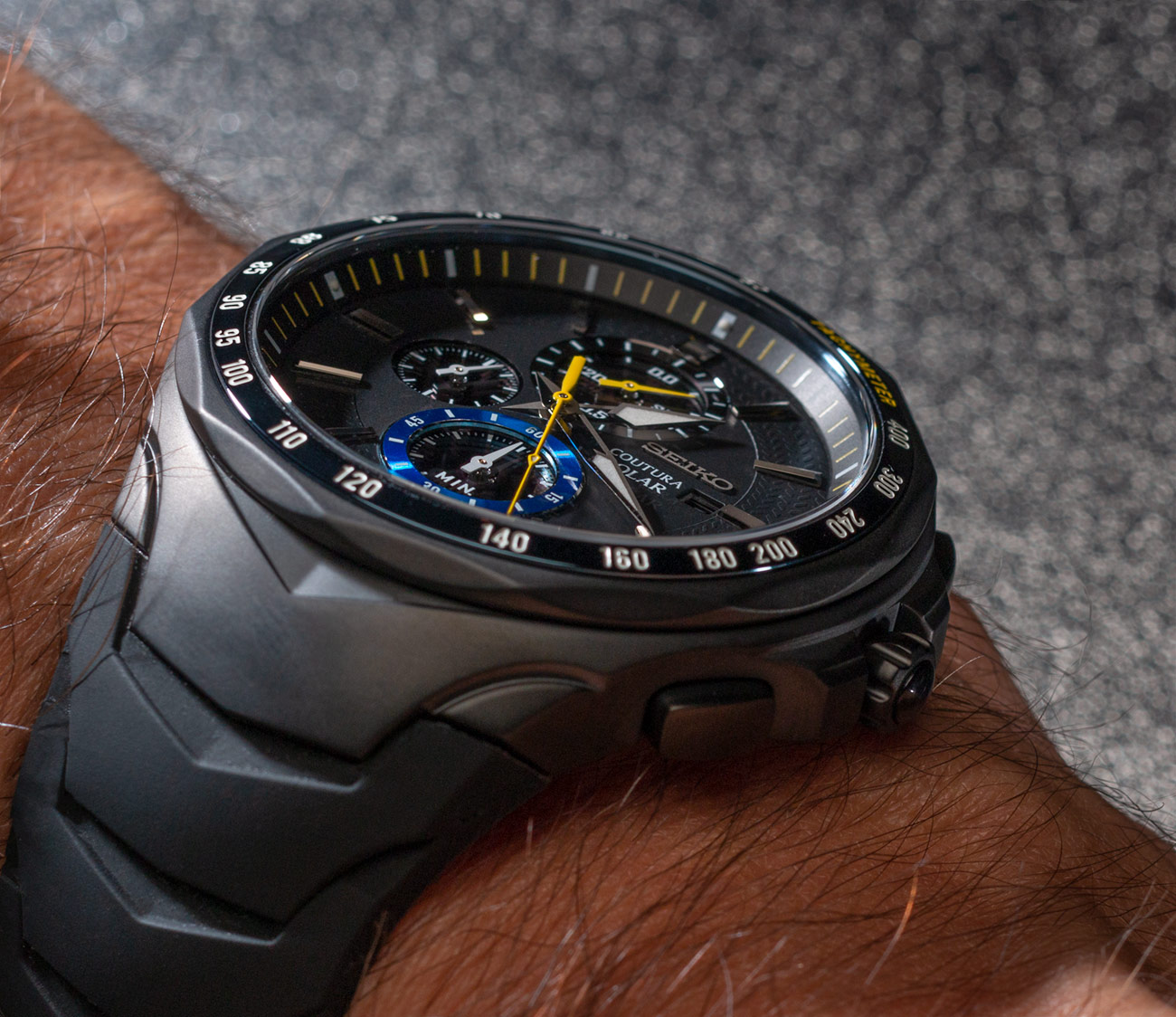 The watch lends its black facade with blue and yellow highlights to the Coutura Camaro. Well, I didn’t actually see many yellow highlights make it onto the car’s exterior aside from the brake pads, but it did have blue rims, underglow, and other highlights to match the watch’s blue bezel and chronograph minutes subdial. On the watch, yellow is used for the minute/second track found on the rehaut, the “tachymeter” text, and most notably, for the chronograph seconds hands, all coming together as appropriately sporty. The Seiko Coutura Solar Chronograph Jimmie Johnson watch is 45.5mm wide in steel with a matte black ion finish on a “tire-tread” rubber strap. It might sound large, but it wears very comfortably and ergonomically. 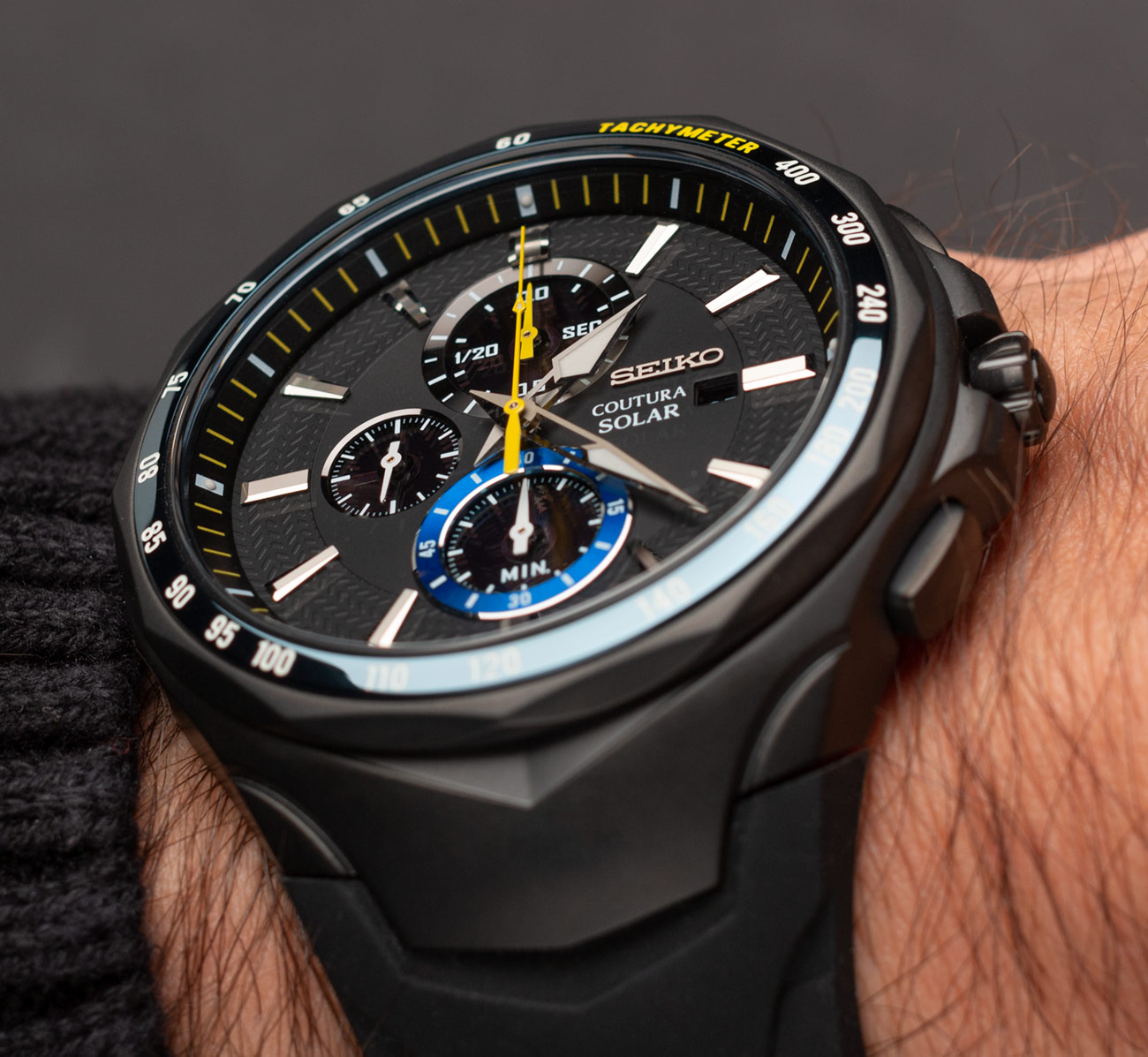 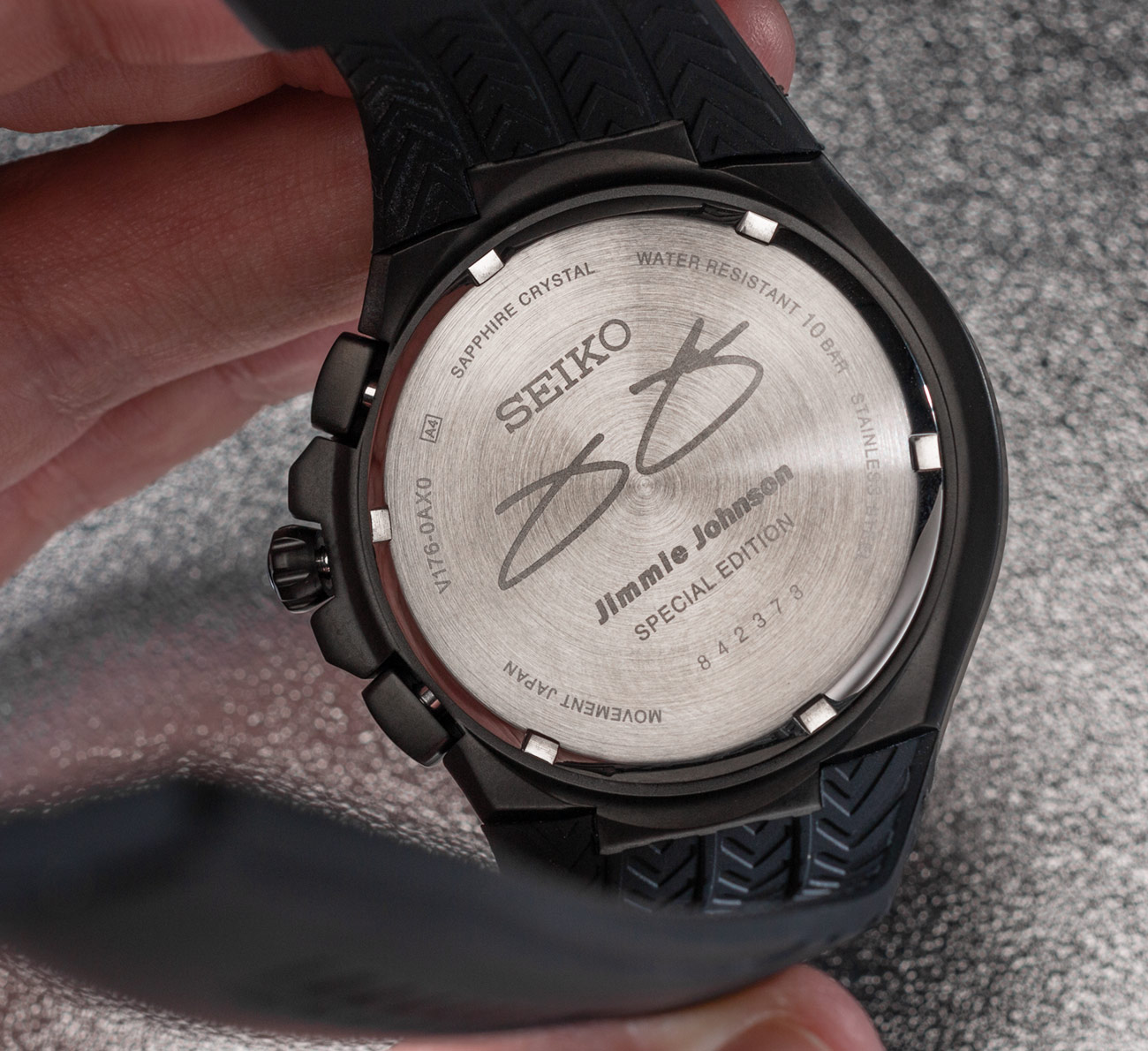 Thankfully, branding is kept to a minimum for the watch, with some “Jimmie Johnson” text and his signature found on the caseback only. Other appreciated elements are a flat sapphire crystal and 100m of water resistance for some sense of durability, though a little more lume might have been nice, with only the hands and tiny pips at the compass points visible in the dark. The applied indices, as well as the tire tread texture around the dial periphery, help create a sense of depth and interest. I also will note that the feel of the pushers and motion of the hands are smooth and solid. 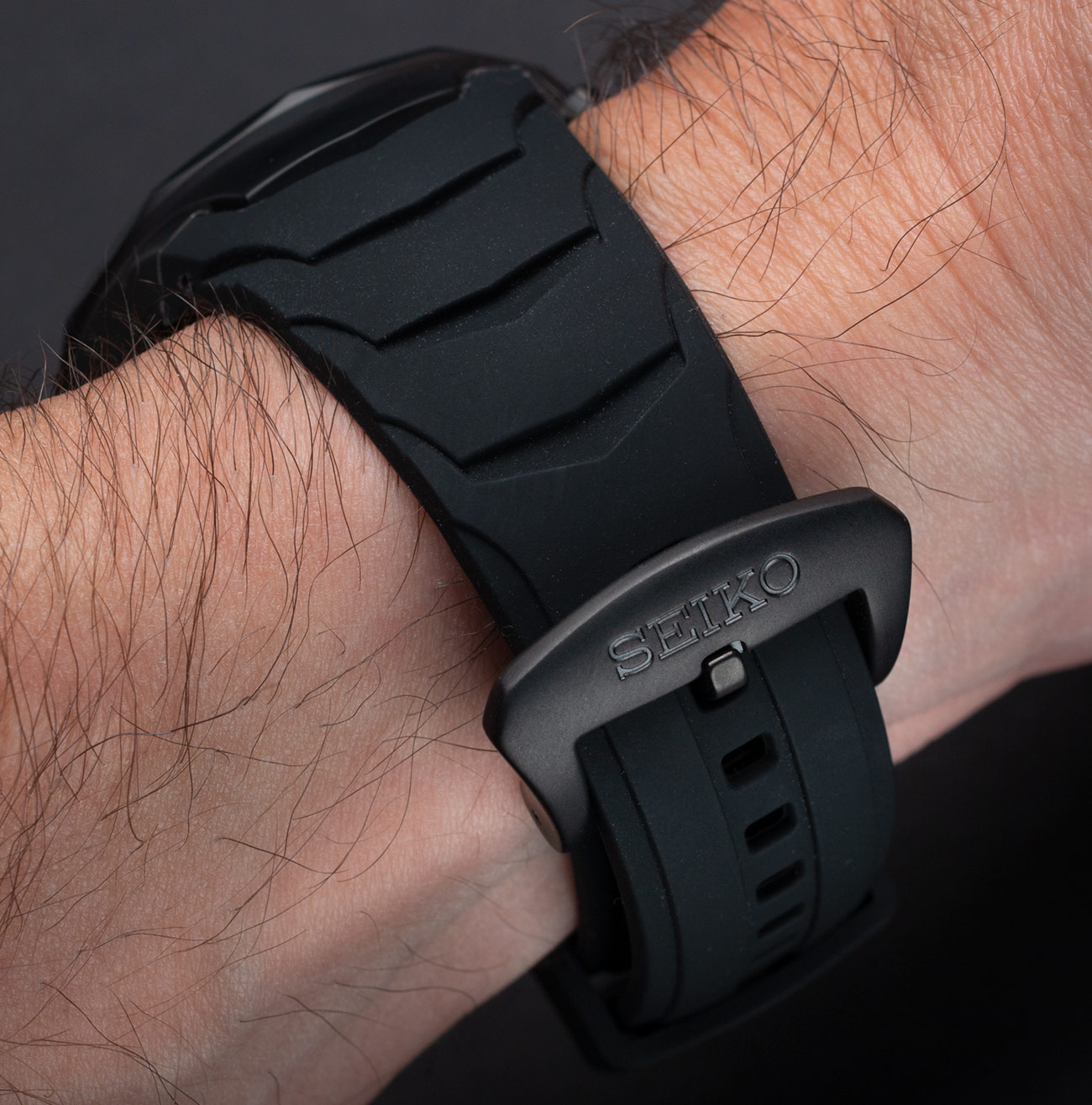 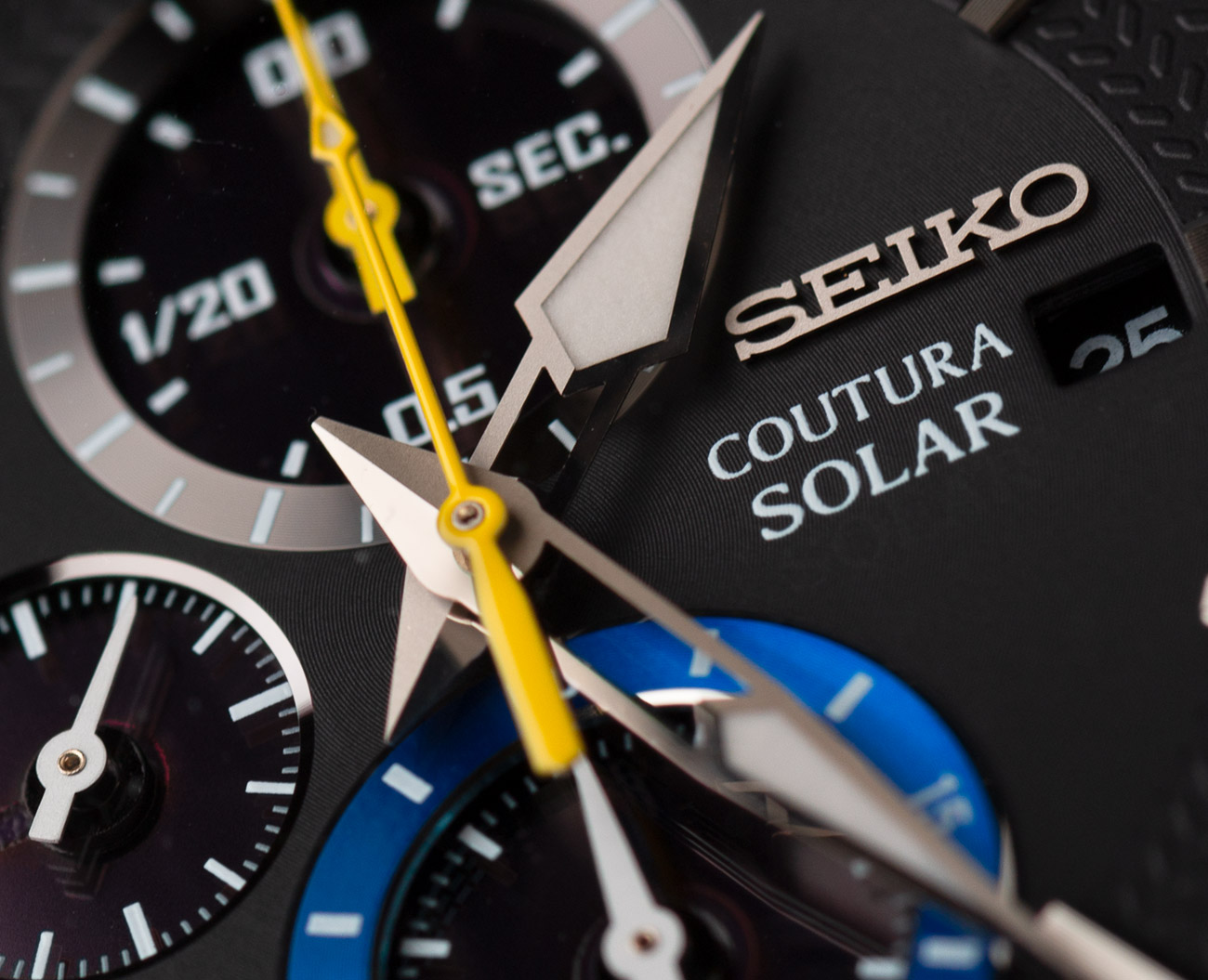 The Seiko Coutura Solar Chronograph Jimmie Johnson is powered, of course, by one of Seiko’s solar quartz movements. You can see that the subtly purple-tinted subdials are where the solar cells are. The Seiko Caliber V176 is found in a number of Prospex line watches as well, and it offers the time and date along with chronograph. The chronograph measures up to one hour via the subdial at 6 o’clock and down to a twentieth of a second. It is fun to watch the 12 o’clock subdial’s hand spin around once each second during the first minute as the central chronograph seconds hand ticks away. After the first minute, the hand stops at 12 o’clock while the chronograph continues to run, but it will move to indicate the exact twentieth of a second measurement when the chronograph is stopped. 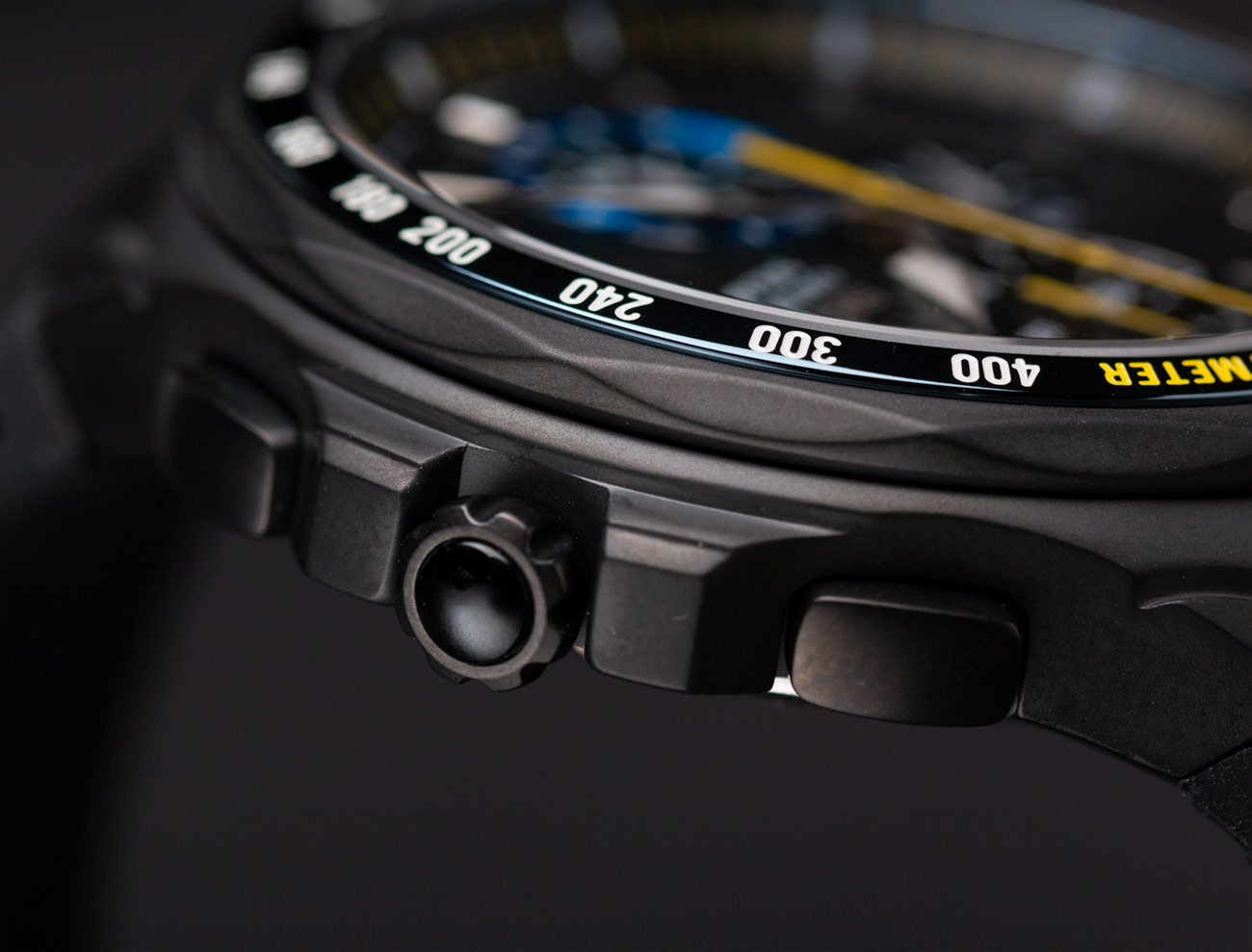 I’ve said before that I know almost nothing about cars, and I think I had only heard of Jimmie Johnson previously because of his Seiko ambassadorship. If Seiko’s Coutura Camaro promotion is intended to raise awareness for the Coutura line, it has succeeded with me, at least, as enthusiasts such as myself might sometimes skip over the Coutura watches in our excitement for Seiko’s various mechanical or higher-end GPS watches, for instance. Even though the Seiko Coutura Solar Chronograph Jimmie Johnson Special Edition watch is perhaps designed for car enthusiasts more than it is for watch enthusiasts, Seiko is often able to make watches for general consumers that live up to watch snob standards. Comfortable and attractive on the wrist, they did a great job making a slick, solid, and relatively affordable racing-themed chronograph. 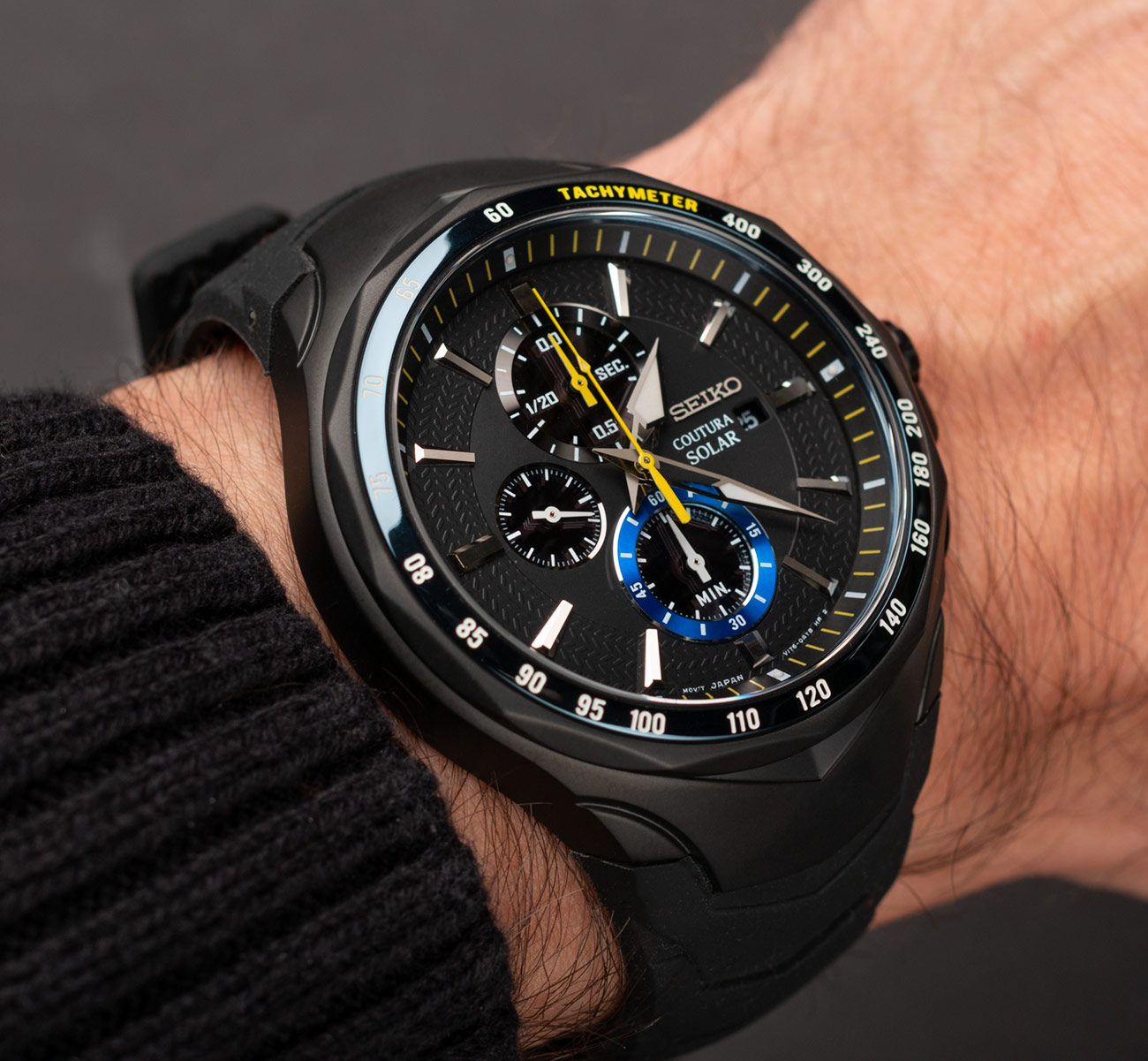 For car fans, watches like this likely have a whole other level of appeal, and it was impressive that the audience was not deterred by rain on the day of the outdoor event and clamored to see the car and meet the celebrities. For me, meeting the good people at Seiko and the surprisingly handsome watch itself was the main attraction. Seiko is taking the Coutura Camaro for events around the country and its next and final stop will be November 11th, 2018, at Macys South Coast Plaza in Los Angeles. The Seiko Coutura Solar Chronograph Jimmie Johnson Special Edition watch (reference SSC697) is “Special” rather than a limited edition, and it has a retail price of $495. Learn more at seikousa.com.