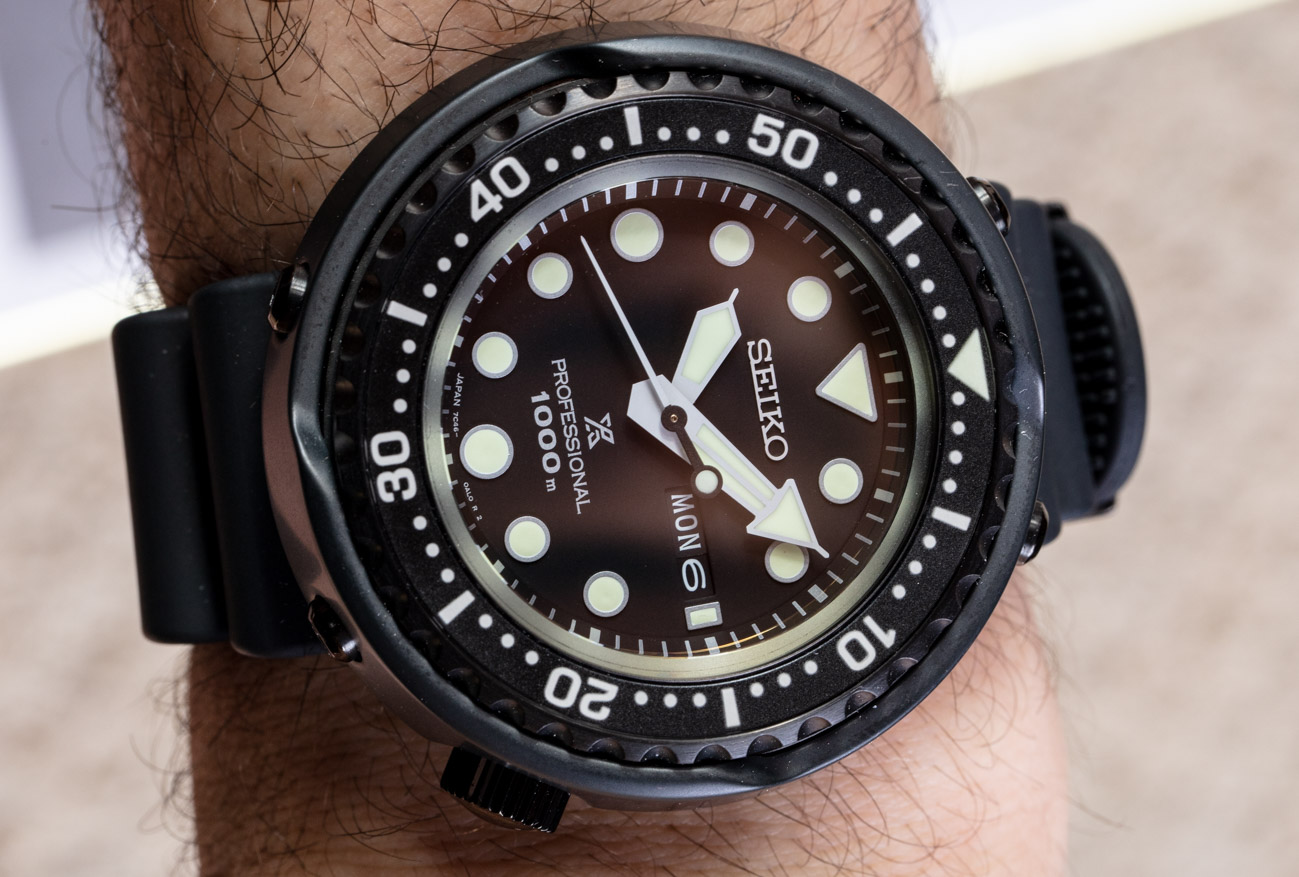 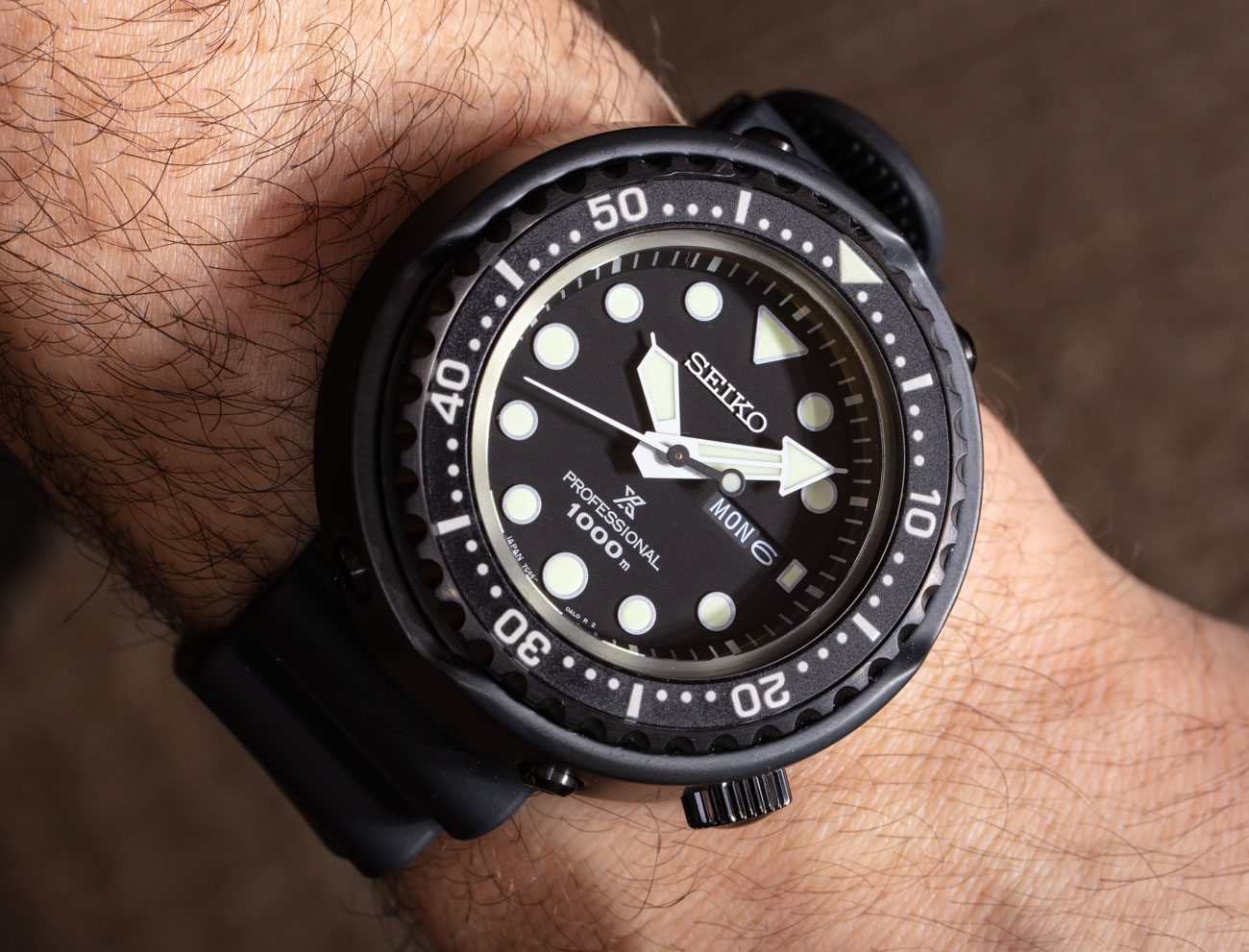 For 2020, Seiko has released a new high-end homage to its original “Tuna” dive watches that were originally released in the 1970s. In fact, there is a slew of new Prospex Tuna watches for 2020, but this particular Seiko Prospex Tuna S23631, in my opinion, will be of particular interest to enthusiasts seeking something cool-looking, comfortable, and highly evocative of the original Seiko Tuna watches. The Tuna itself was originally released in 1975 as a mechanical watch, and then, a few years later, Seiko added quartz movement versions of its now iconic diver’s watch design. At the time, quartz was the movement technology everybody wanted, and with its focus on utility, this “tuna-can-looking” professional diver’s watch started its long journey into the hearts of enthusiasts.

Seiko has never shied away from rendering the Prospex Tuna in so many different variants that it can easily boggle the mind to consider all the directions Seiko has gone with the collection. That makes it very challenging to compare one Seiko Tuna to another. In my opinion, people interested in a Seiko Tuna watch need to first consider two questions. The first question is what size they want the case to be, and the second question is which movement they want inside the Tuna. 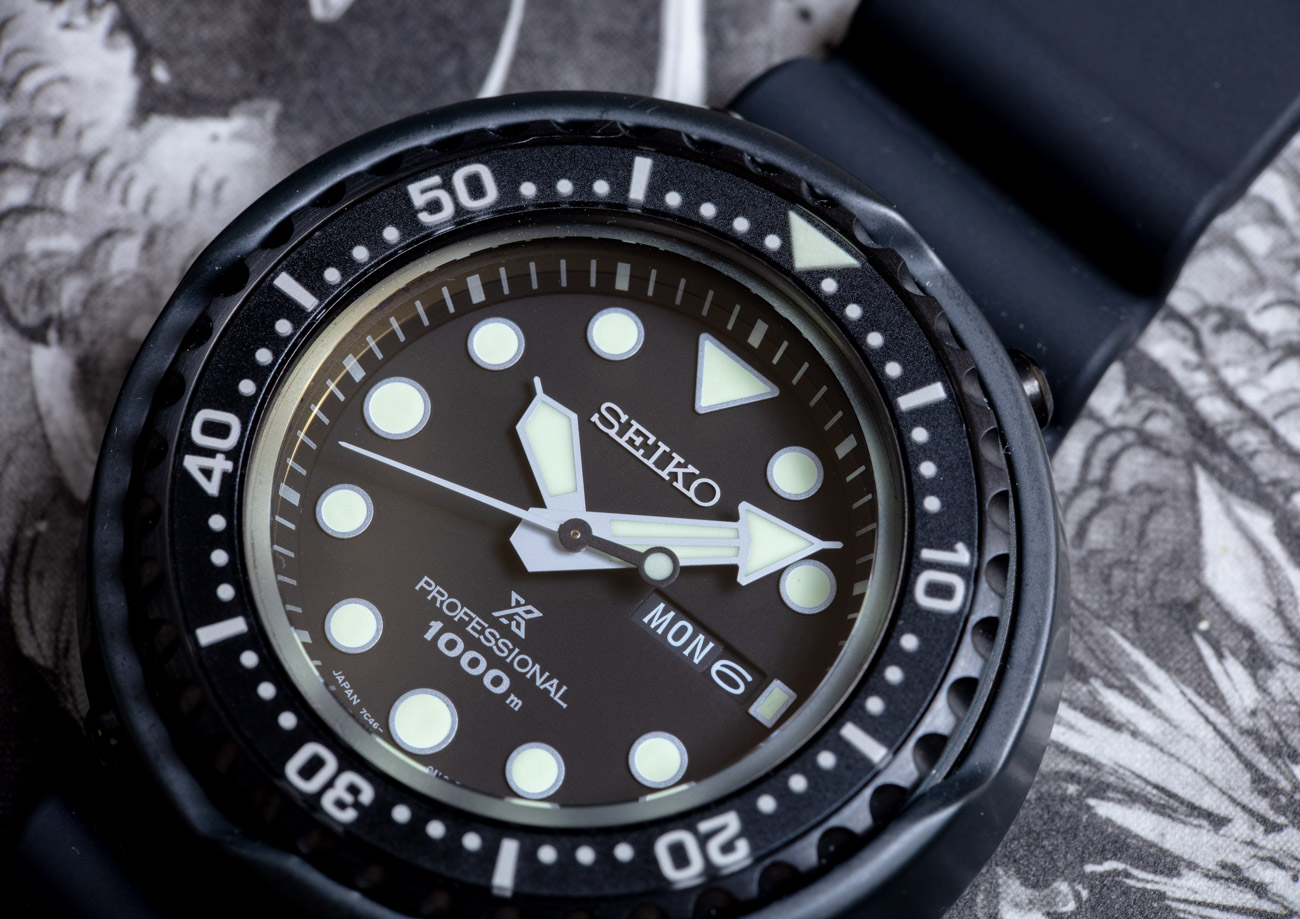 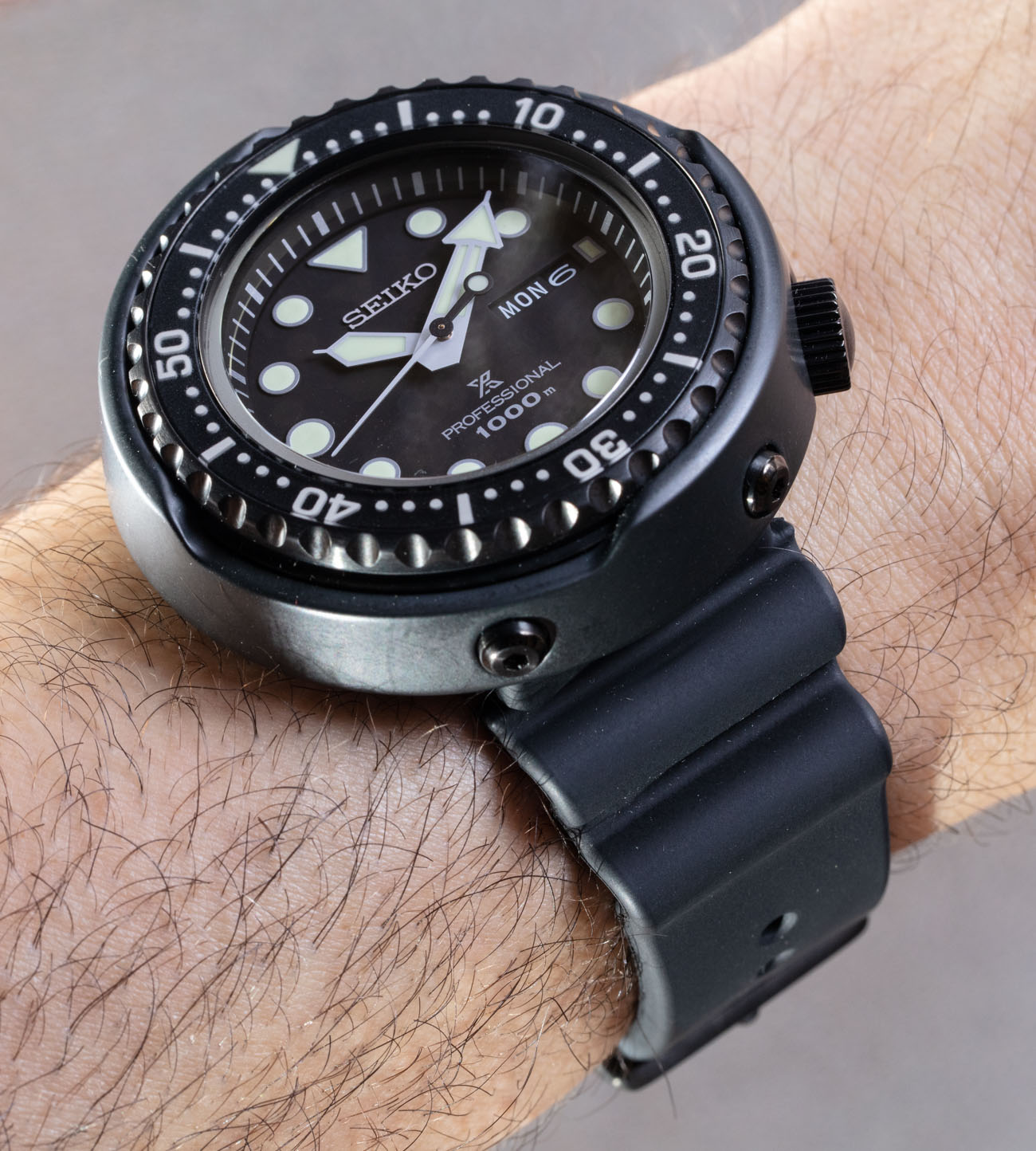 The Prospex Tuna S23631 has the following answers to those questions. The case is on the larger size of the genre at 49.4mm-wide, but that number is a bit misleading when it comes to wearing comfort. As a lugless watch, the Tuna wears smaller, and it also wears comfortably as the piece sort of sits on your wrist, as opposed to feeling as though it is strapped to your wrist. If that isn’t clear, then you’ll probably have to try a Tuna watch on to see what I am referring to. Suffice it to say that these watches are way more wearable and comfortable than they may appear in pictures.

This particular model has 1000 meters of water resistance, now a domed sapphire crystal, and is produced with an all-black case that mixes “ceramics,” titanium, and steel. I also want to mention that even though the S23631 is meant to be a homage to the original 1975 Seiko Tuna, it is not a 1:1 copy in any respect, with a number of little differences here and there. What I love about this watch is that it very much evokes the core elements of what I appreciate in a Tuna timepiece, in a design that I find to be refreshingly straightforward and also utilitarian. 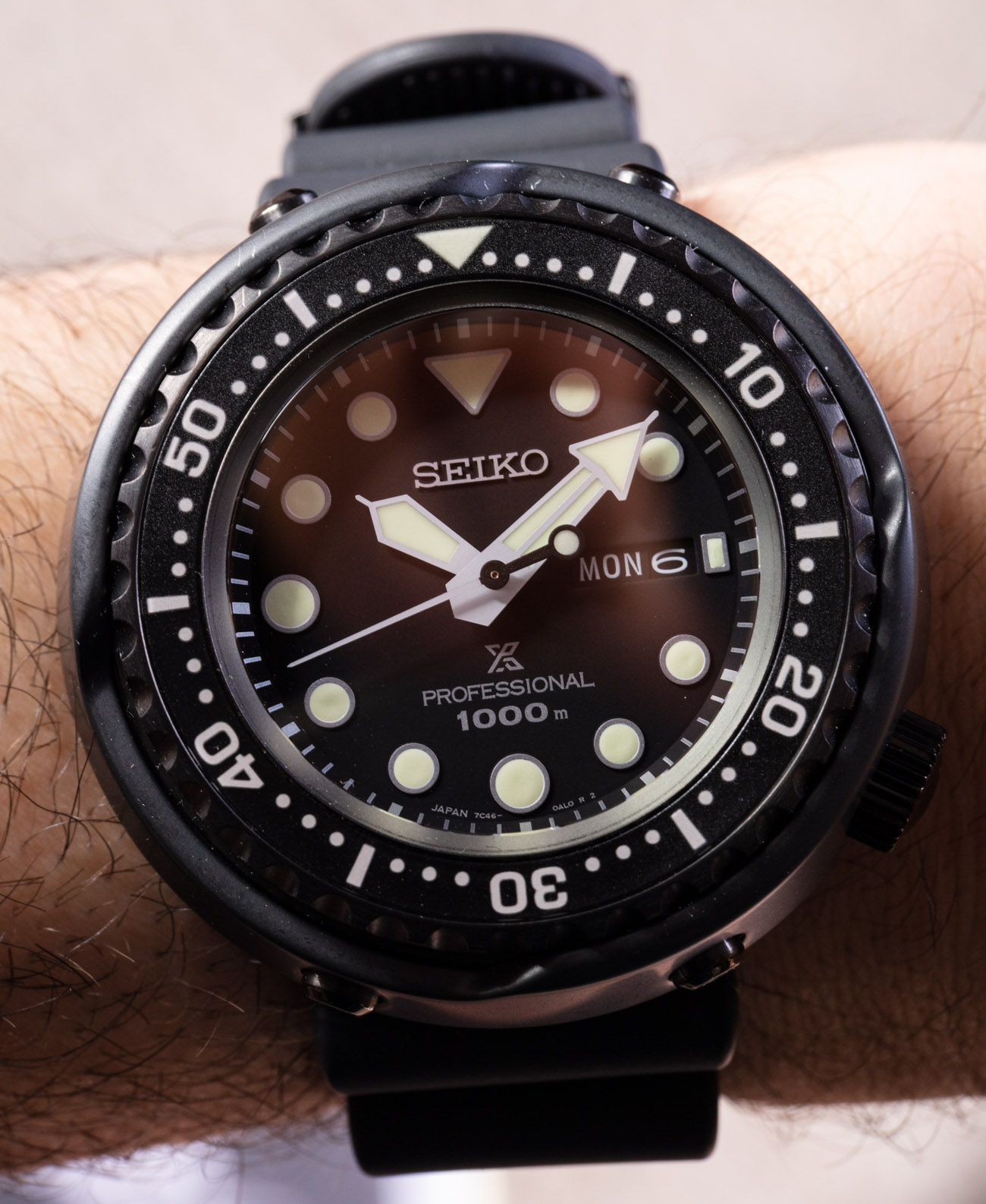 Such a design philosophy goes to the heart of what the Seiko Tuna was originally supposed to be about — and that is a reliable, durable, and very legible timing instrument for professional divers. The ease of reading the dial in dark or murky waters, as well as being able to fit on your wrist over a wetsuit make for both great utility, but also a lot of practicality if you want to wear one of these as your daily timepiece nowhere near a body of water.

Inside the watch is Seiko’s in-house-made caliber 7C46 quartz movement that features a day/date complication on the dial in addition to the time. While Seiko offers everything from Spring Drive to automatic versions of the Tuna, I have always preferred this timepiece as a high-end quartz piece. I am a bit unclear as to the overall case construction, but I believe that most of it is coated titanium with a ceramic insert on the rotating bezel and possibly ceramic for the exterior “hood” that goes over the inner case, what gives the Seiko Prospex Tuna its distinctive look. Note that also released for 2020 is a sister model to the S23631 which is the slightly smaller (47.7mm-wide) and in hard-coated steel (not in black) Seiko Prospex Tuna reference S23629. Both watches have similar dials, sapphire crystals, and share the same quartz movement, but the price difference between the two models is nearly $1,000. Why might that be? 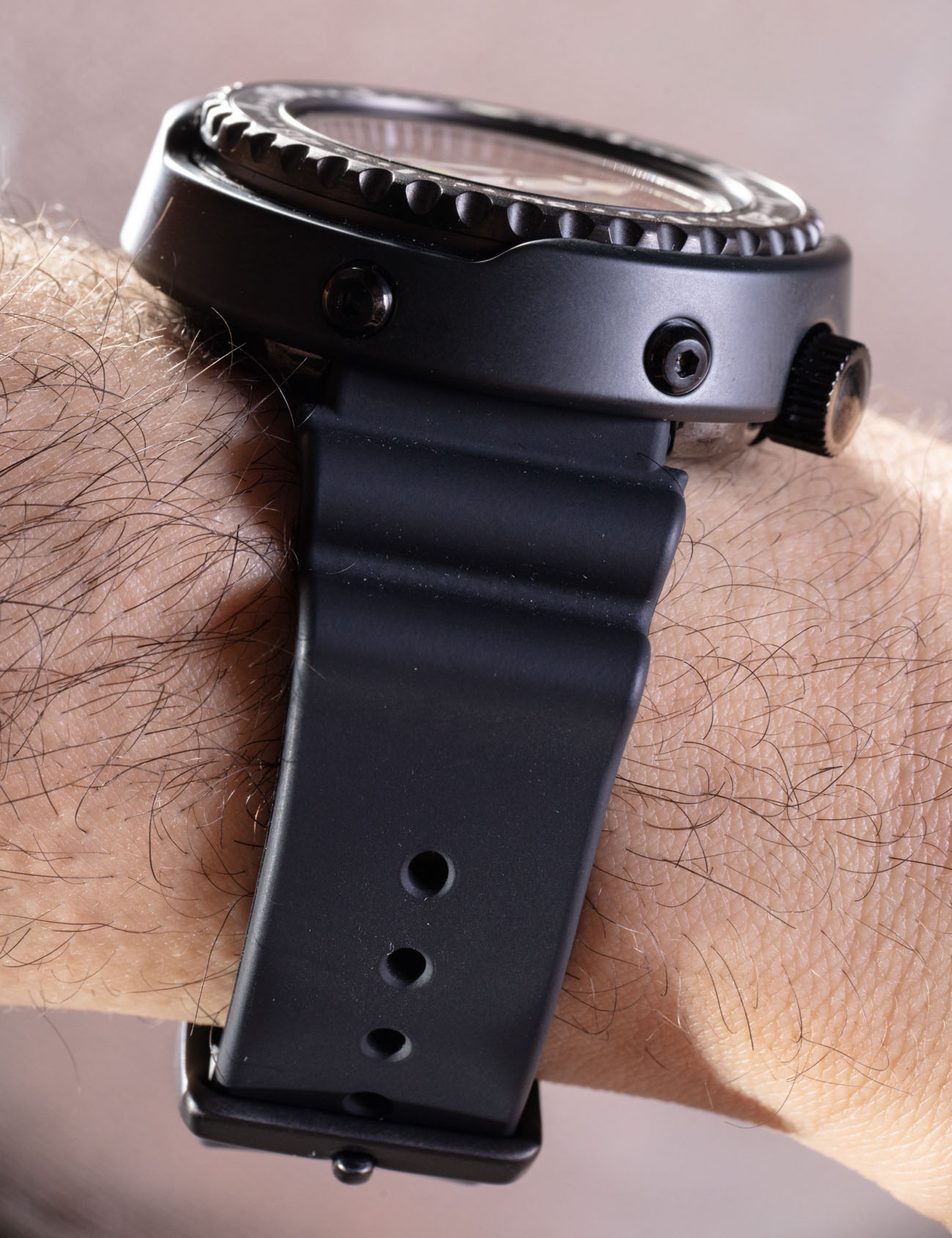 My guess is that it is related to the S23631’s case materials, which include titanium and ceramic parts. While these parts are not exotic within Seiko any longer, the brand is really focusing on the exterior quality of the case and ensuring that the timepiece is not only light but also wards against of signs of wear as much as possible. One of the best reasons to get a high-end Japanese watch like this model is because they are made to look good for as long as possible. The Swiss are not nearly as interested in scratch-resistance (for example) as the Japanese are, on average. So, if you are asking yourself why this particular high-end quartz watch costs nearly $2,500, it is because Seiko specifically designed it to look as good as possible for as long as possible.

If you handle an original 1975 Seiko Tuna, what you’ll immediately appreciate is how un-retro the watch seems. Something about the design feels persistently modern even though the collection is 45 years-old. Today, the Tuna might not be as fresh as it was in 1975, but it still feels highly contemporary and distinctive. Attached to the watch is Seiko’s also distinctive diver’s style strap, which here is in high-grade silicone (as opposed to rubber, which is used a bit less frequently these days). Price for the Seiko Prospex Tuna S23631 watch is $2,400 USD. Learn more at the Seiko website here.