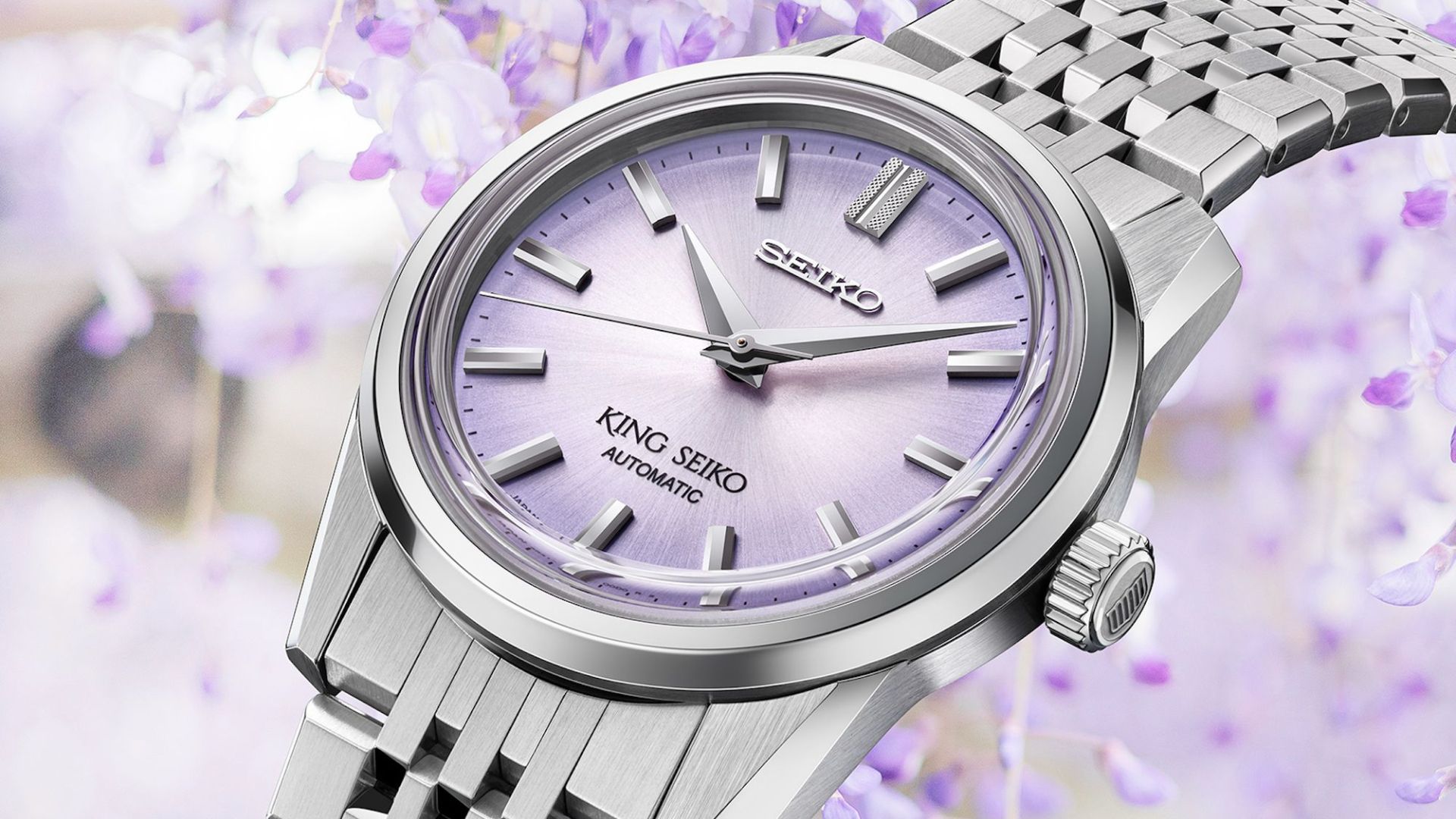 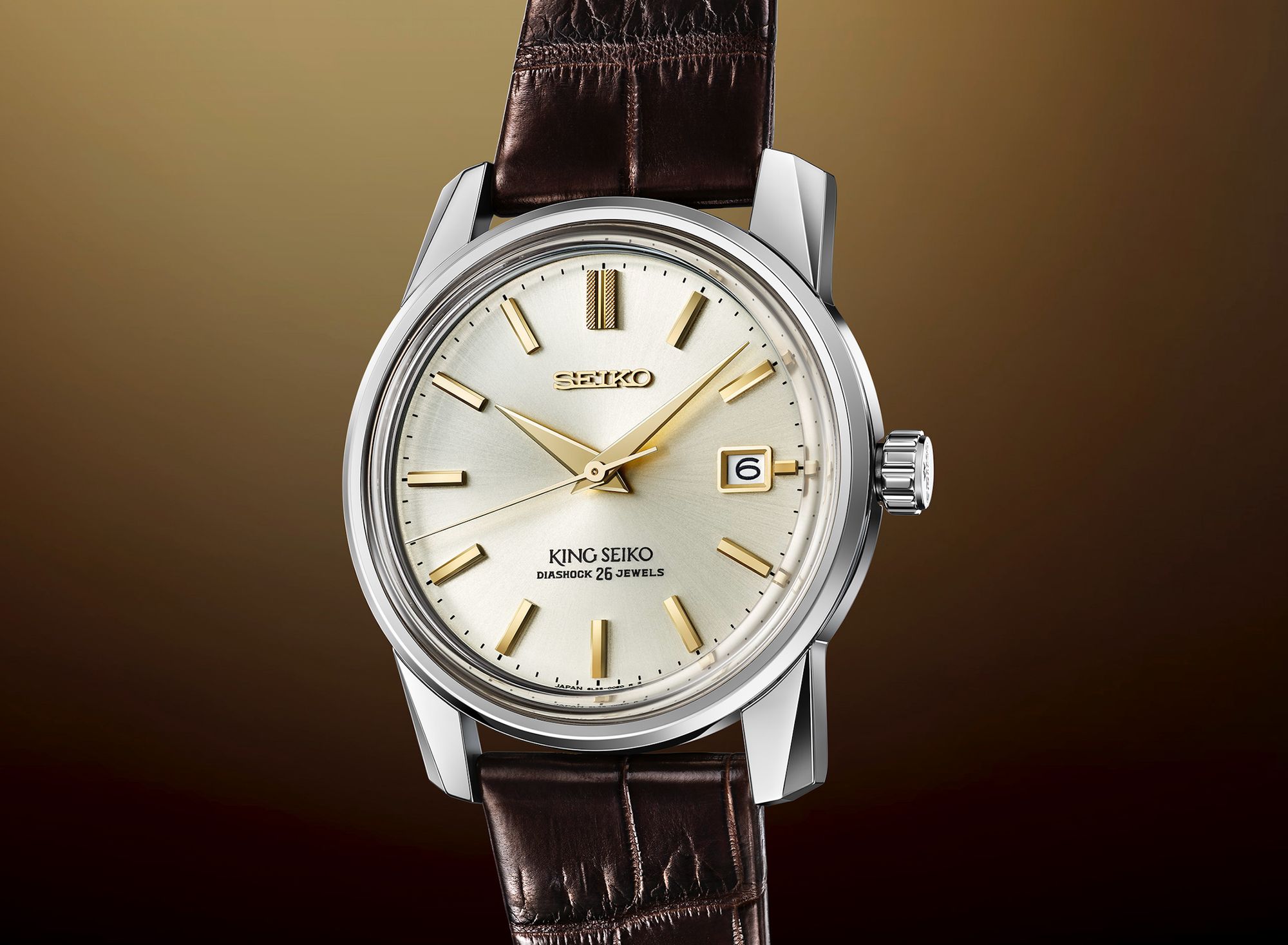 The King Seiko name is one that holds a special place in the hearts of countless collectors. One of the most famous stories from Seiko’s history is how the innovative Japanese watchmaker created an inter-company rivalry between its two factories during the 1960s to promote innovation with the goal of producing the absolute best watches possible. To rise to this challenge, Seiko’s Suwa factory created the Grand Seiko brand, while its Daini factory produced high-end luxury watches under the King Seiko label. Although the King Seiko range was ultimately discontinued during the 1970s, Seiko revived this fan-favorite line in 2020 with a limited-edition model, then followed it up last year with a batch of standard-production King Seiko watches that marked the formal return of this premium range to the brand’s catalog. Now, for 2022, Seiko has added two more King Seiko watches to the lineup with a new limited-edition model and a special-edition reference with a striking purple dial. 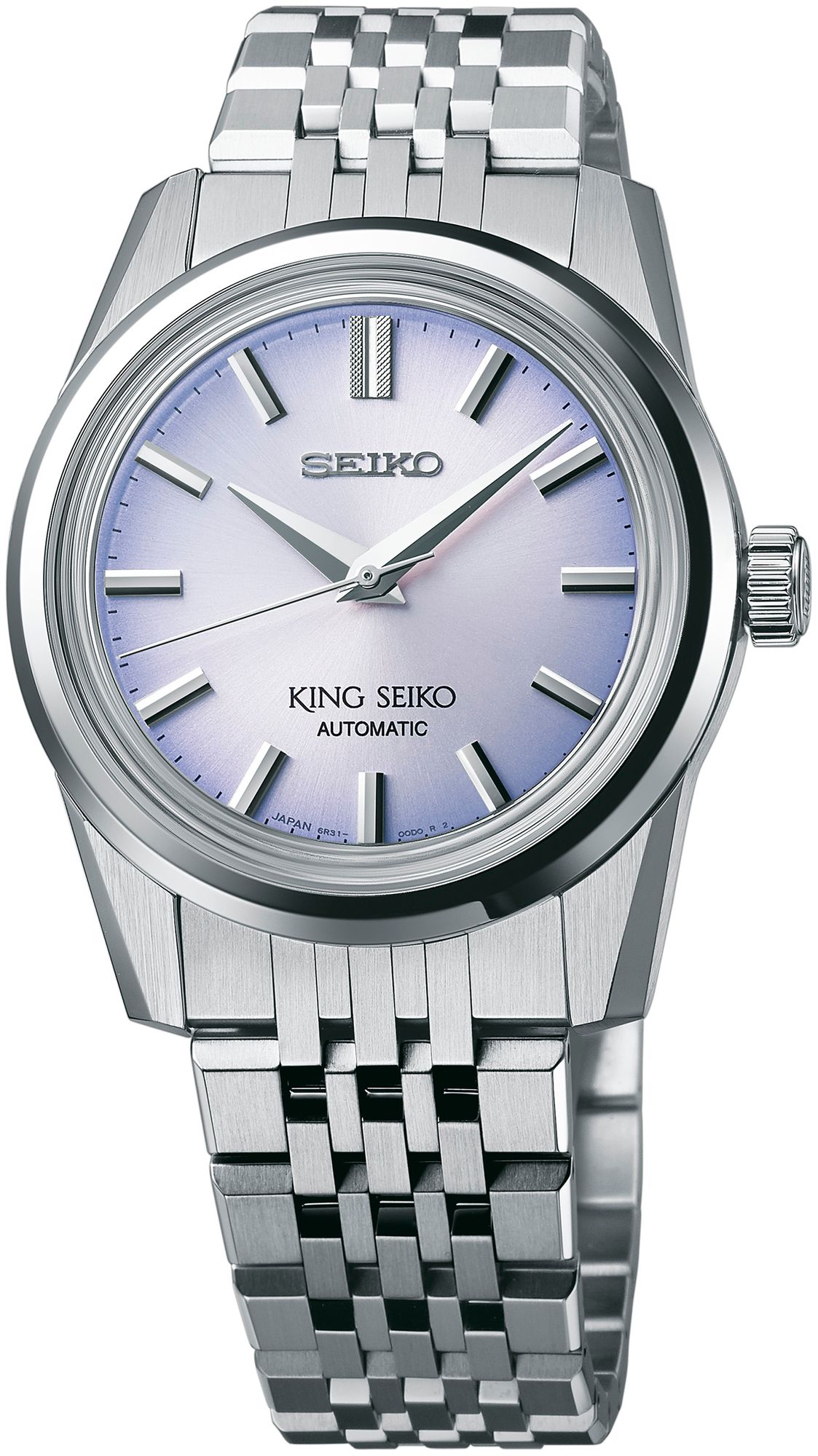 On the other hand, the non-limited King Seiko SPB291 also features a case that is based on the distinctively sharp and angular design of 1960s King Seiko watches; however, it measures 37mm in diameter and lacks the gold caseback medallion found on the limited-edition version. With that in mind, despite also being slightly thinner at 10.33mm versus 11.4mm-thick, the King Seiko SPB291 offers twice the water resistance as its limited-edition counterpart with an official rating of 100 meters. 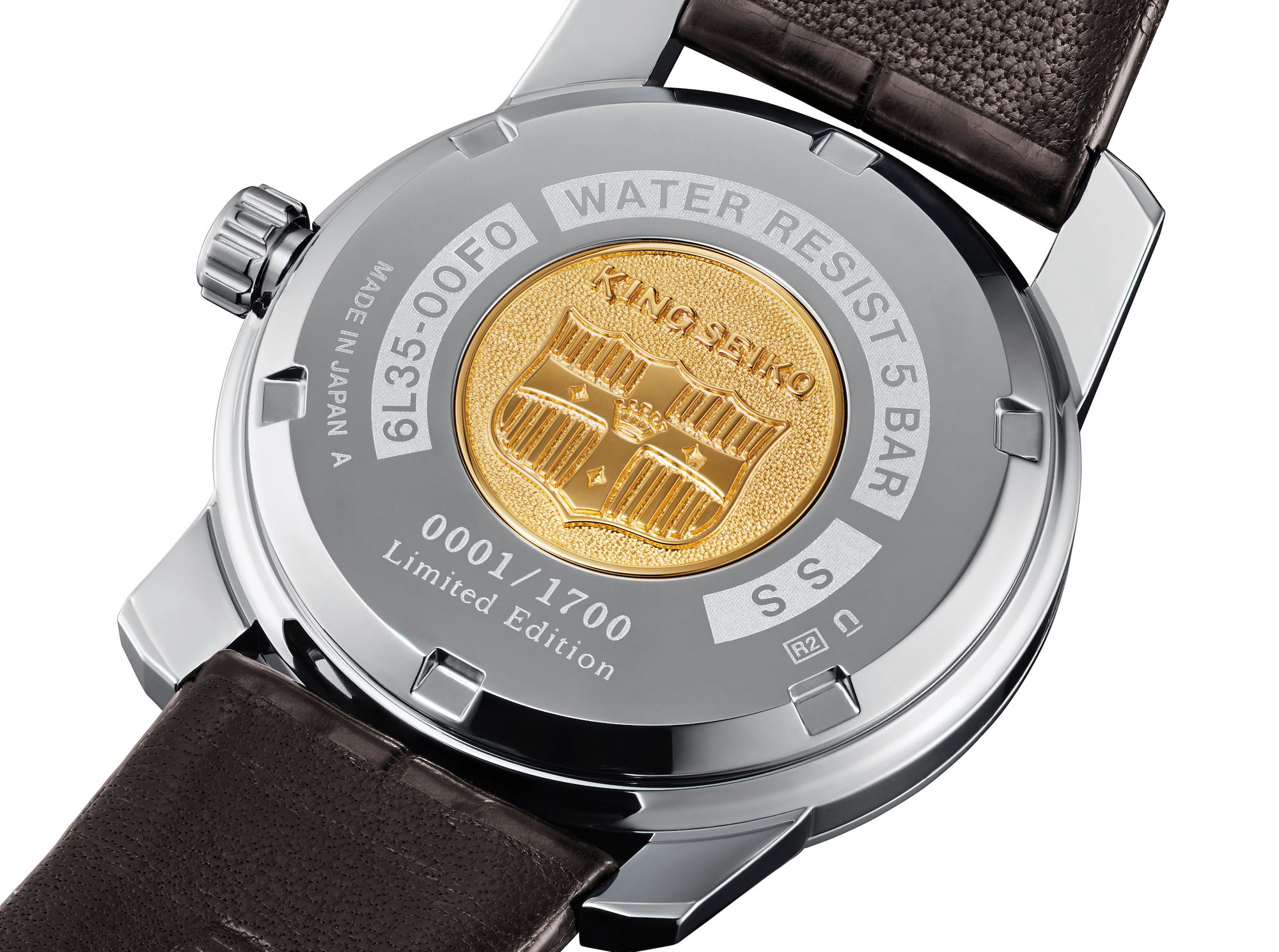 Just as you would expect from anything produced by Seiko, the dials of these new King Seiko watches take center stage and they feature the brand’s signature sharply-edged dauphine hands. On the limited-edition SJE087, the dial appears in a pale champagne color with gold-finished hands and hour markers. This is the greatest difference compared to the previous limited-edition King Seiko from 2020, which featured a silver dial with entirely white-metal accents. The champagne dial includes a radial sunray pattern that works in conjunction with the yellow-gold color of the hands and markers to create a warmer and more nostalgic overall appearance.

Meanwhile, despite being a “special edition” rather than a proper limited-edition model, the new King Seiko SPB291 receives what is arguably the more unusual dial option. Fitted with a dial in a pale shade of purple that Seiko calls “Tenjin-fuji violet,” the color is inspired by the wisteria that blooms in the Kameido Tenjin Shrine in Kameido, Japan, which is the original birthplace of King Seiko watches. Similar to its limited-edition sibling, the SPB291 receives meticulously cut dial furniture and a set of polished dauphine-shaped hands. Finished with a radial sunray pattern and a subtle gradient effect that creates a darker shade of purple toward its outer edge, the dial of the King Seiko SPB291 offers a truly striking appearance, despite not featuring an intricate surface pattern or even being very saturated in its overall color. 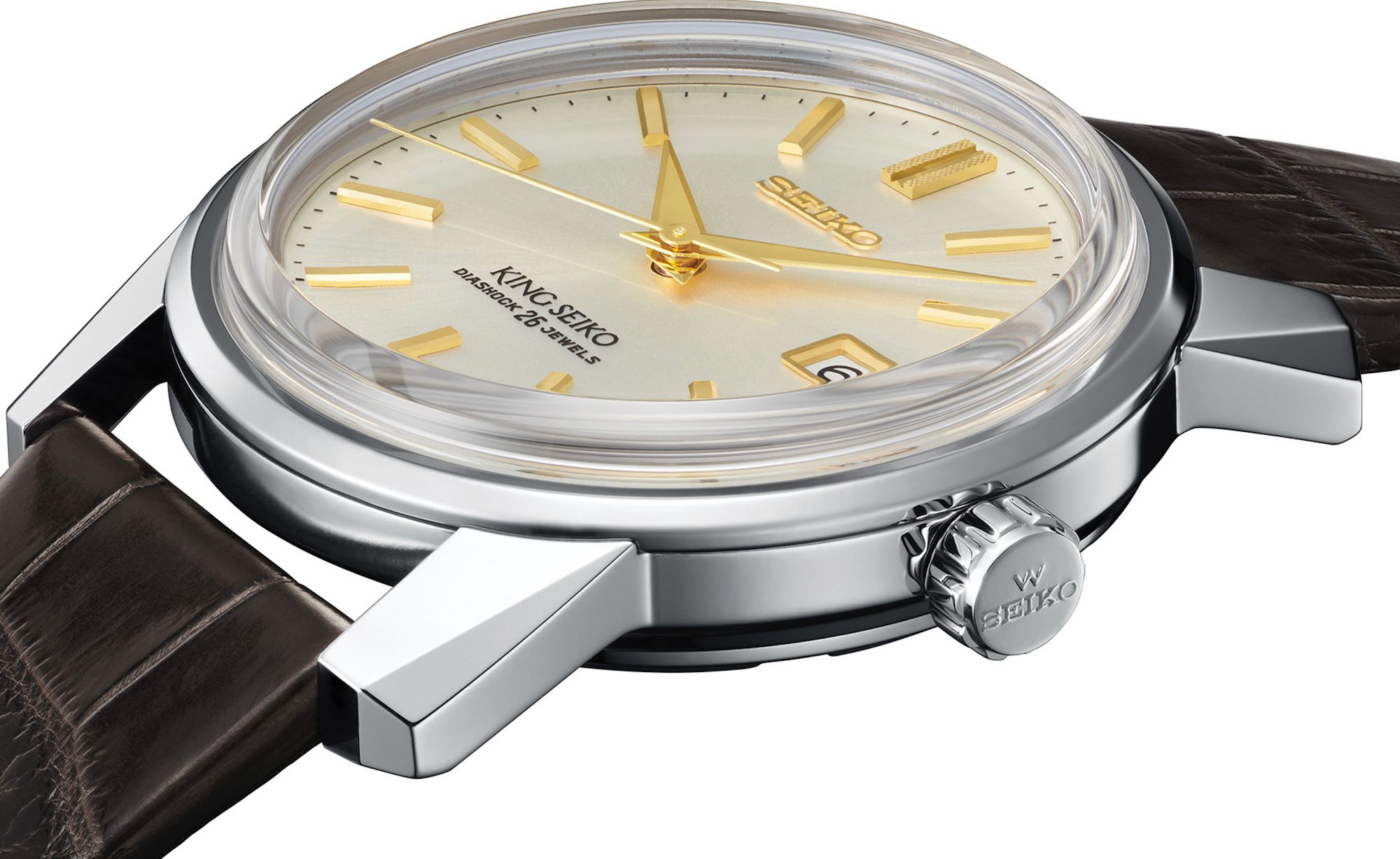 One of the biggest differences between the limited-edition King Seiko SJE087 and its non-limited SPB291 sibling is the movement used to power the two watches. Sitting behind the purple dial of the King Seiko SPB291 is the Caliber 6R31 movement, which is essentially the time-only version of the Caliber 6R35 that can be found inside a number of other modern Seiko watches. Beating at a frequency of 21,600vph with a power reserve of approximately 70 hours, the Cal. 6R31 is an upgraded no-date version of Seiko’s modern workhorse movement, and while it promises reliable performance and decent timekeeping, it ultimately isn’t anything all that special by itself.

On the other hand, the limited-edition King Seiko SJE087 receives the Caliber 6L35, which is a significantly different movement from what is found inside most of Seiko’s watches. Running at a higher frequency of 28,800vph, the Cal. 6L35 offers a lower power reserve at approximately 45 hours; however, its higher frequency allows it to offer superior timekeeping with an official rating of -10/+15 seconds per day, compared to the -15/+25 seconds offered by the Caliber 6R31. Additionally, the Caliber 6L35 also includes a date display, which appears through a gold-framed window at the 3 o’clock location on the limited-edition King Seiko SJE087. In terms of straps and bracelets, the limited-edition King Seiko SJE087 comes fitted with a brown crocodile strap with a signed stainless steel pin buckle, while the purple-dial SPB291 receives both a stainless steel bracelet and an alternate white leather strap with matching purple stitching. 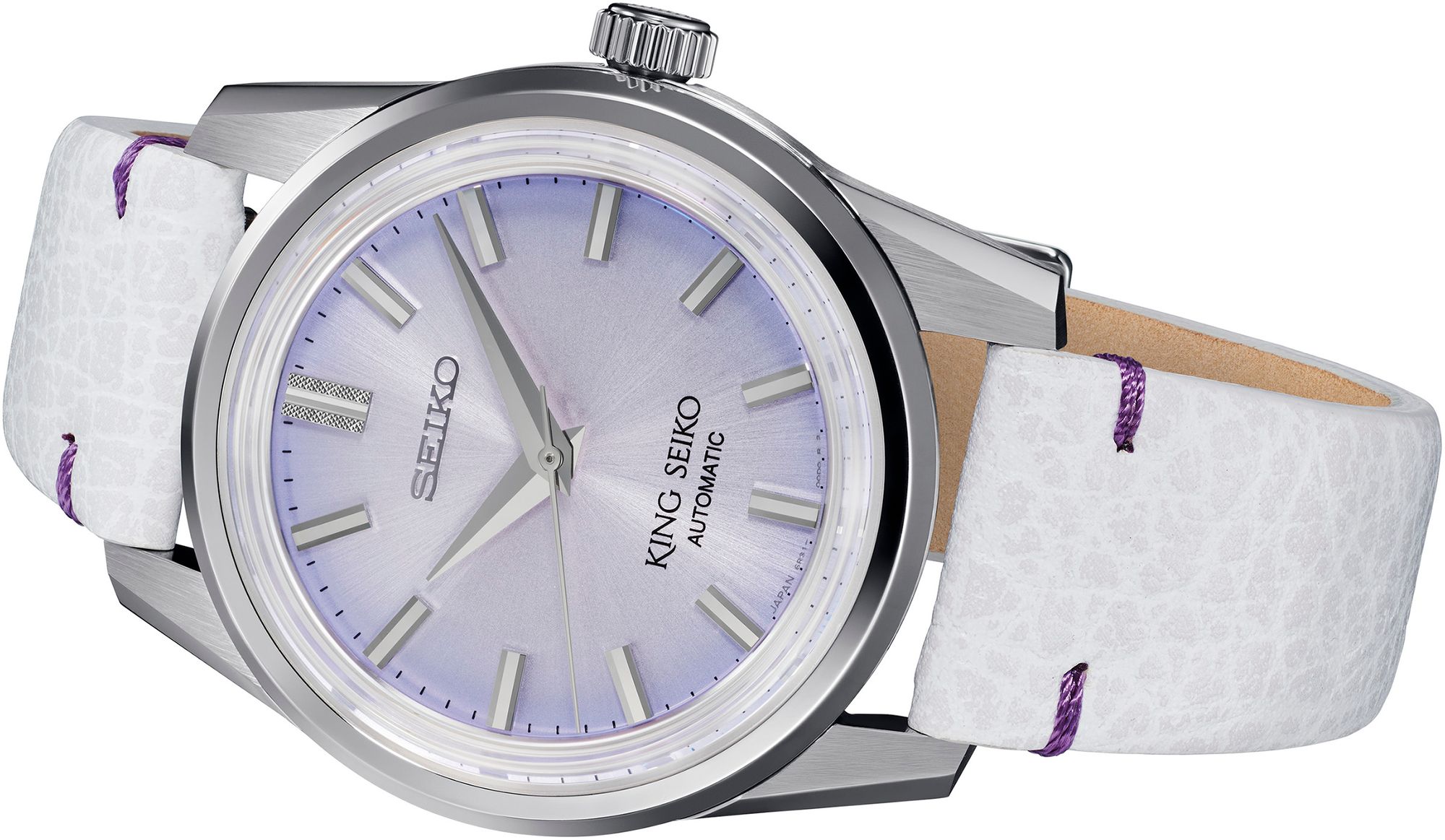 At their core, these new King Seiko watches are essentially dial variants of existing models that collectively help expand the brand’s recently-revived line of premium timepieces. The limited-edition SJE087 is the same watch as the limited-edition King Seiko model from 2020, except it now has a champagne dial with gold hands and hour markers. Similarly, the non-limited “special edition” SPB291 is virtually identical to the standard production King Seiko models, except it is now fitted with a striking wisteria-inspired purple dial. At the time of launch, the 1,700-piece limited-edition SJE087 is priced at $3,300, while the purple SPB291 has an official retail price of $1,850 and will be available from July 2022 exclusively at the Seiko boutiques worldwide. For more details, please visit the Seiko Luxe website.