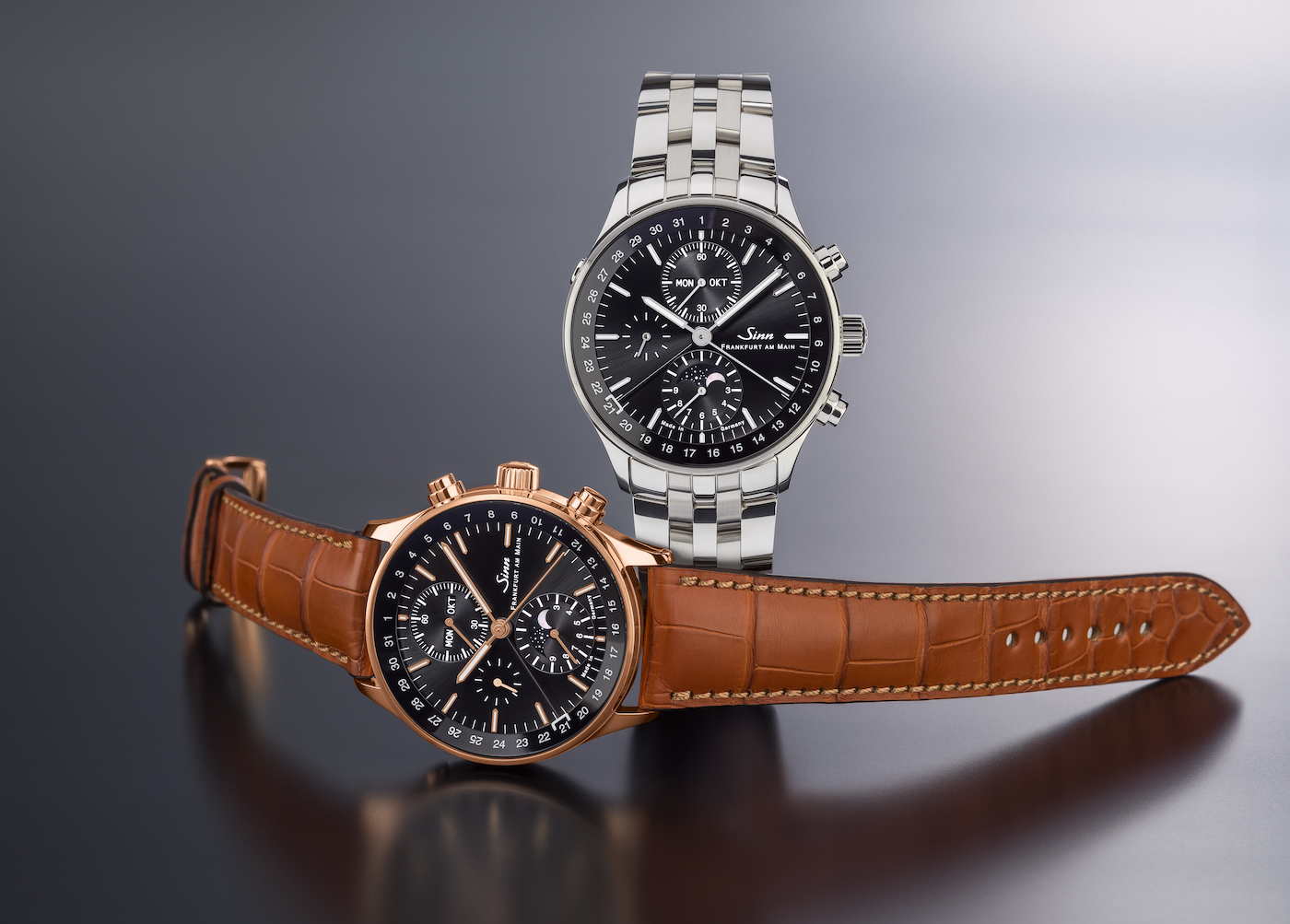 One of Germany’s much loved makers, perhaps best known for their outstanding tool watches, has released the latest member of their ‘Frankfurt Financial District’ watch series that debuted almost 20 years ago in September 1999. The Sinn 6012 brings an awful lot of functionality into a watch that actually does away with the triple time zone the original Frankfurt Financial District watches were known for. In doing so, however, Sinn have created a sharp, legible, and complicated addition to their range that builds on the almost identical 6052 model with the addition of a moon phase indicated on the 6 o’clock sub-dial. 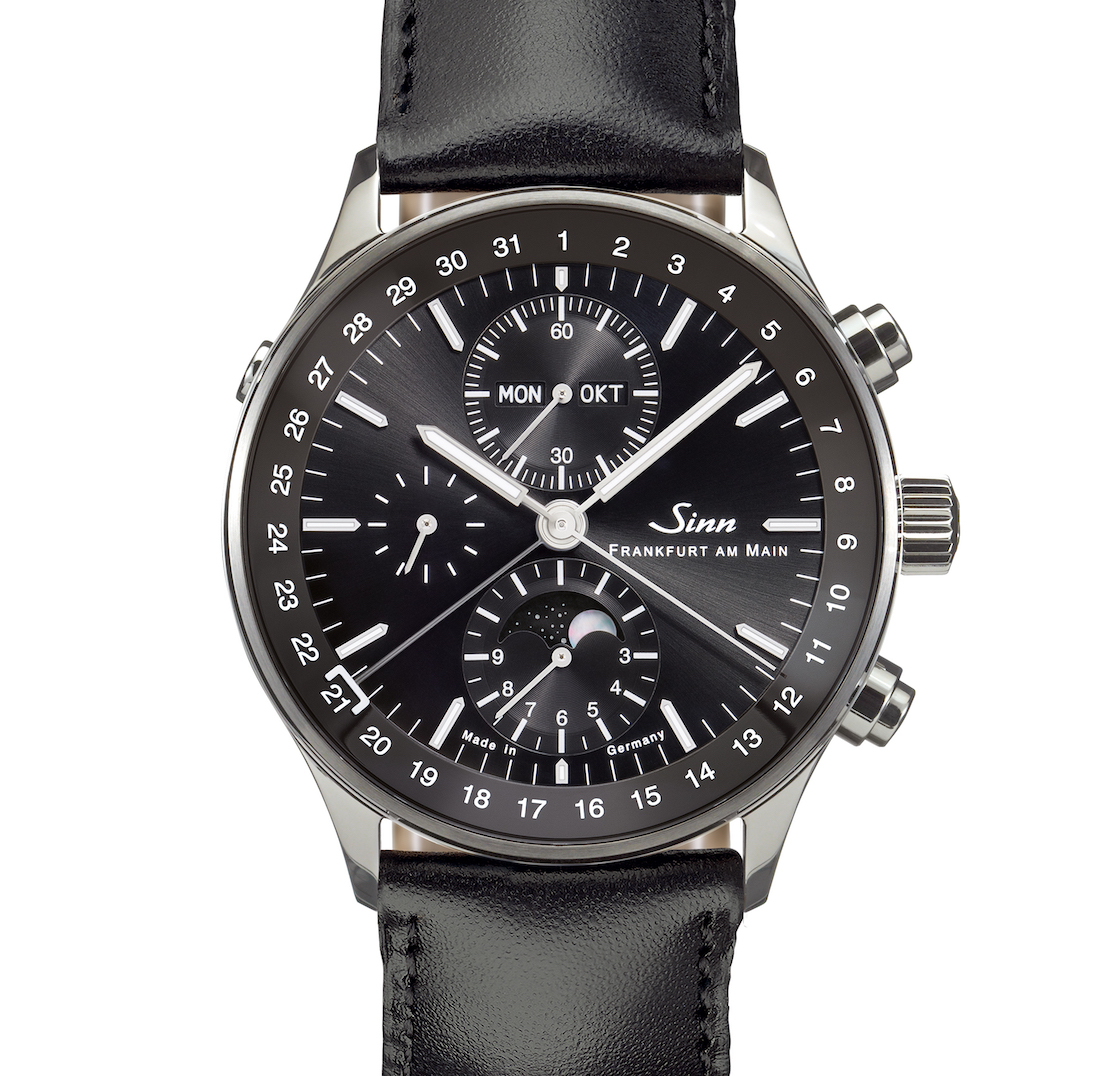 The stainless steel case is 41.5mm wide and 14.5mm thick with 22mm lugs. It is topped by a sapphire crystal with anti-reflective treatment on both sides. A display case back made of sapphire crystal with an anti-reflective layer on the interior, displays the modified movement. The case back is secured by screws, and meets the technical requirements for waterproofness, as set out in standard DIN 8310, resulting in a water resistance of up to 100 meters. 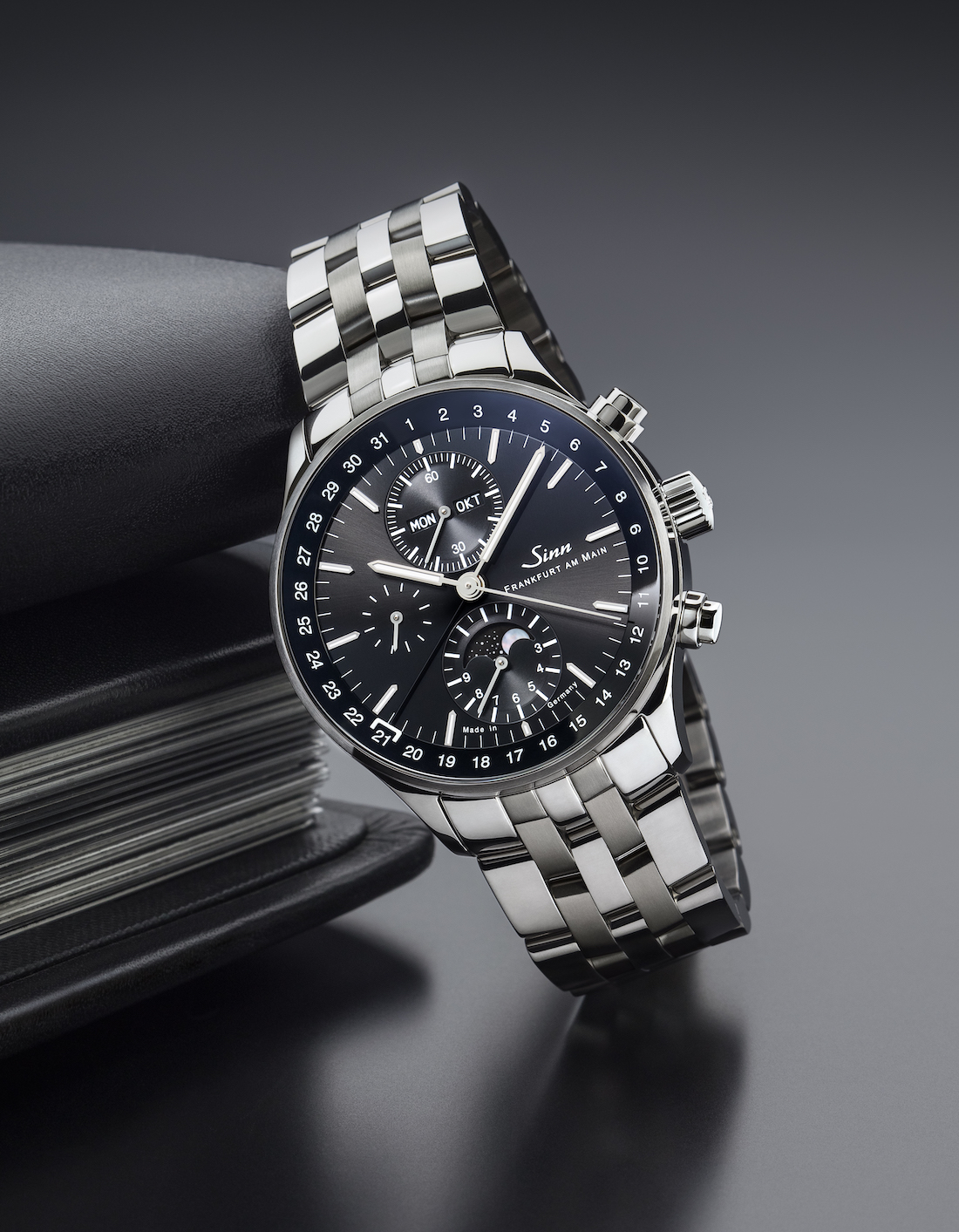 The dial is a relatively simple affair, with white markings printed on a ‘sunburst’ black background. The date chapter ring that encircles the dial is a solid matte black with a clean sans serif font for easy legibility. Although I would have preferred to see a little flash of red on the date pointer to better highlight the date, the clean appearance makes for a very smart and discreet display. On the leather strap, the watch is a handsome, if slightly tall, dress option. 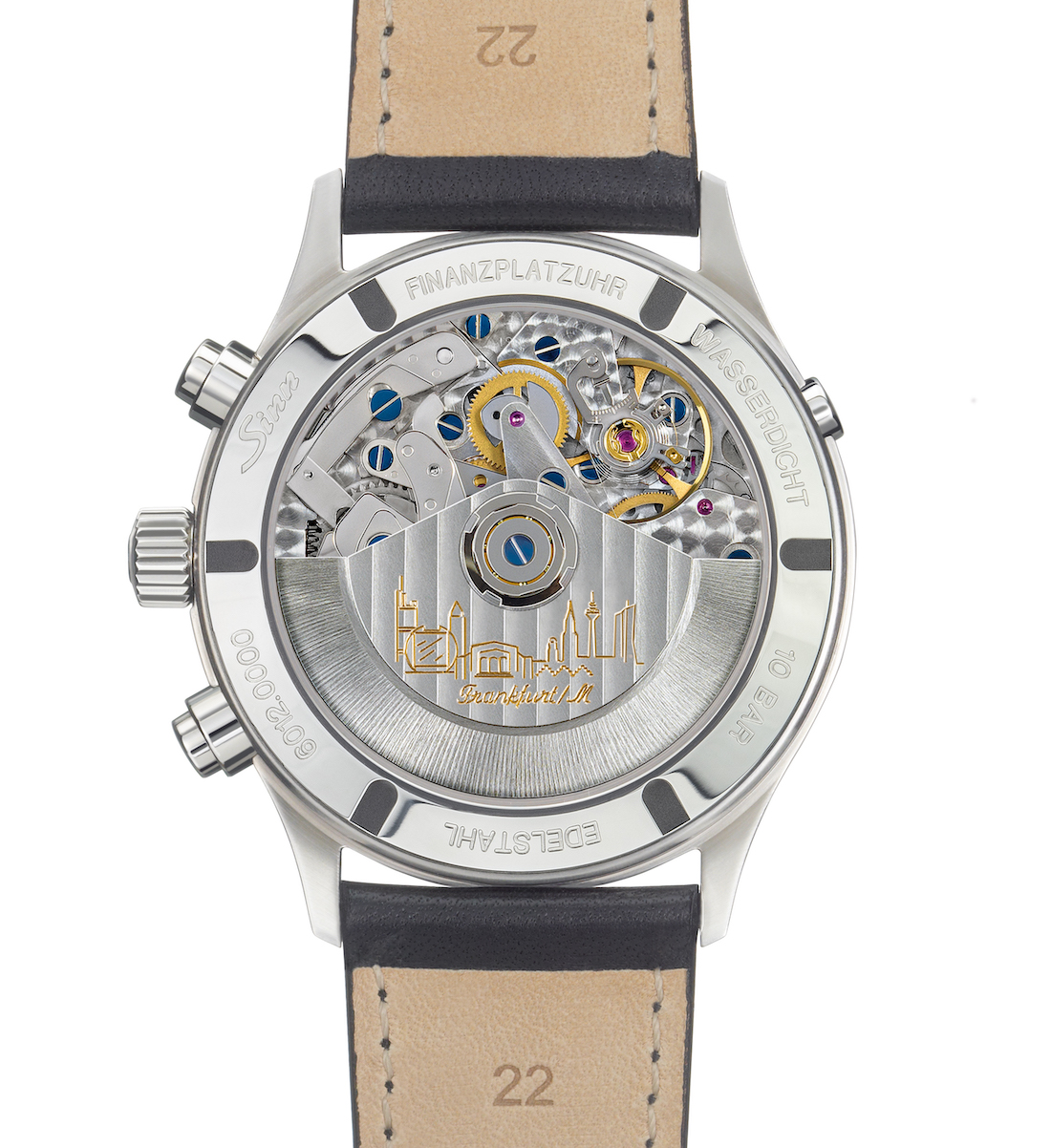 The caliber number for the movement used in the Sinn 6012 is given as SZ06. This movement appears to have begun life as the ETA 7751 and been modified. From the back, the biggest aesthetic modification is the rotor weight featuring the skyline of Frankfurt. Dial-wise, the modification is more significant, however. This is the second watch I’ve reviewed this month that uses an ETA 7751 as its base movement. The other was the Brellum LE.4 Duobox. The movement configuration differs slightly, though. Where the Brellum has a 30 minute counter at 12, the Sinn opts for a 60 minute version. And while both watches have the running seconds hand on the 9 o’clock sub-dial, the Brellum opted to set a 24-hour hand beneath it. 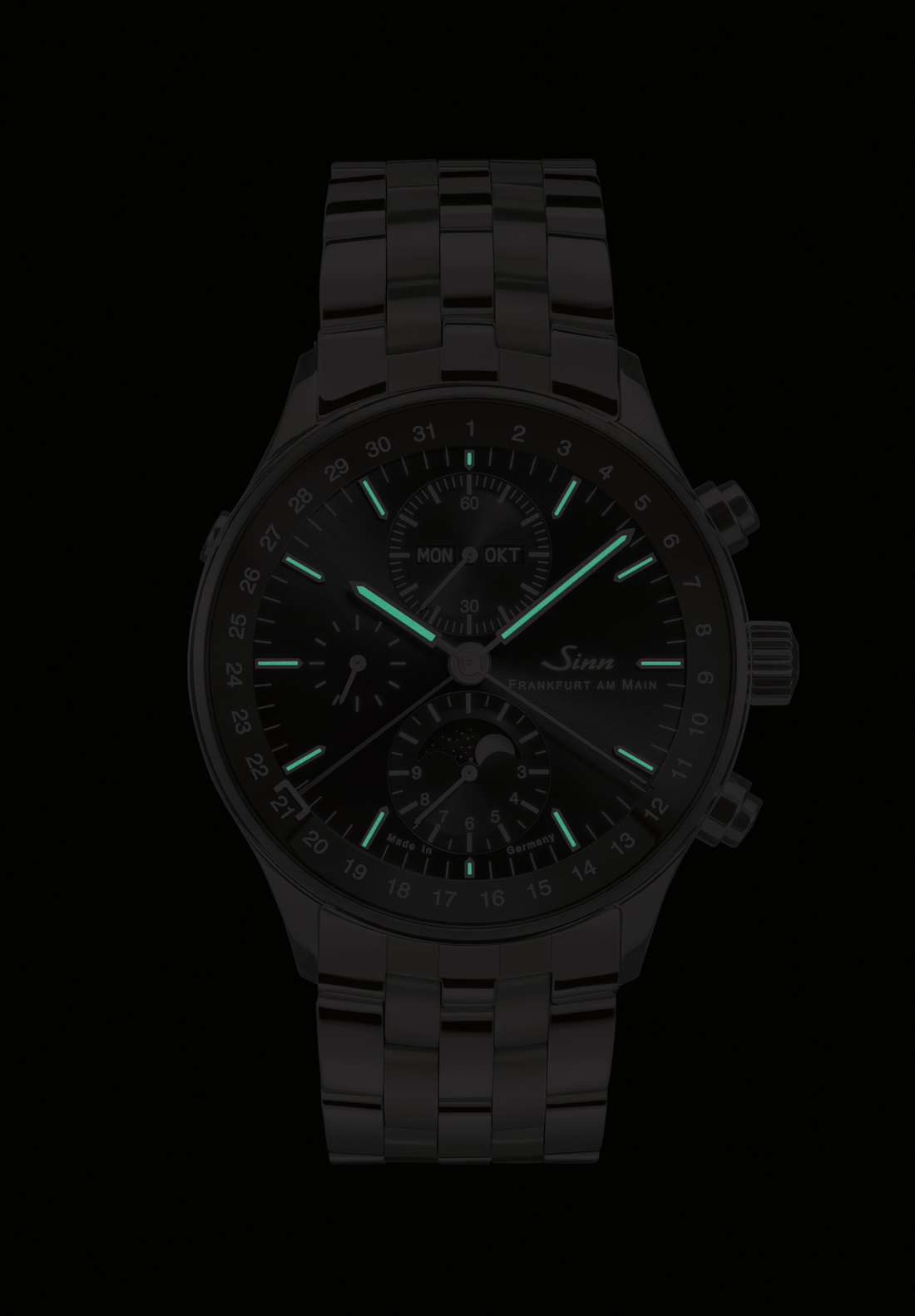 That means the Sinn 6012 has five dial-side complications, which is very impressive. Having the day, the date, the month, a chronograph, and a moon phase complication on a watch retailing for what we can assume to be in five thousand dollar region is no mean feat. 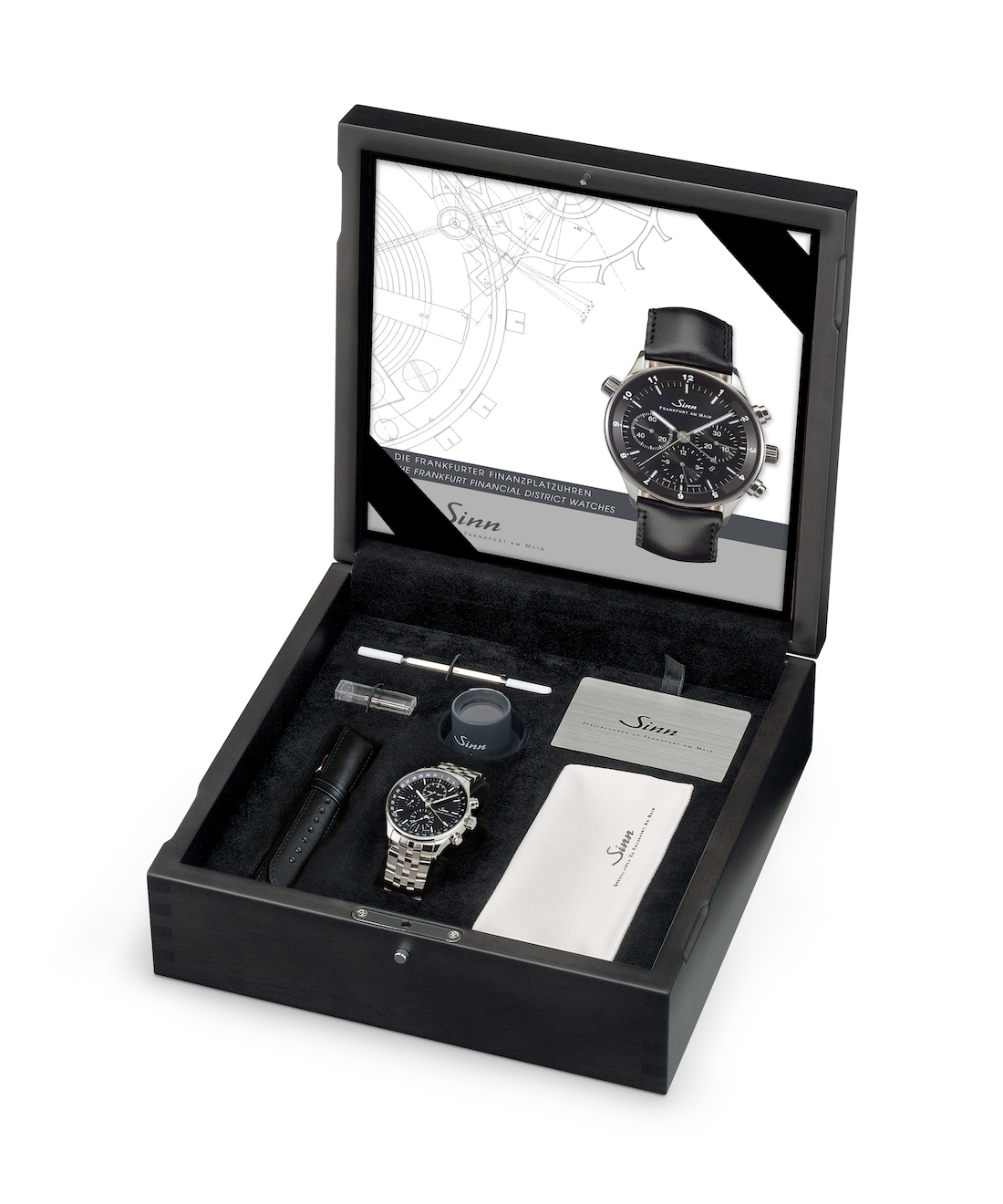 Sinn does play both sides of the market well. There are many handsome, reasonably priced models that come out of the brand to satisfy the most rugged and most refined tastes. I certainly prefer their more outdoorsy output, but can perfectly imagine the kind of customer that would drool over these watches.

For a brand that seems to be well thought of amongst collectors, Sinn does not have a huge amount of mainstream presence outside of Germany. For that reason, I think the more colourful, sporty models tend to be a little better received internationally simply because they are more noticeable. But if what you’re after is a quality, somewhat fringe maker that has produced a watch of significant technological advancement, and yet don’t want everyone to know about it, this humble, elegant chronograph may be the ideal choice. Prices for the steel and rose gold anniversary version will follow shortly. To give you a bill park figure, the most similar existing model in steel is the 6052 (which omits the moon phase complication), and that piece retails at €3,990. sinn.de