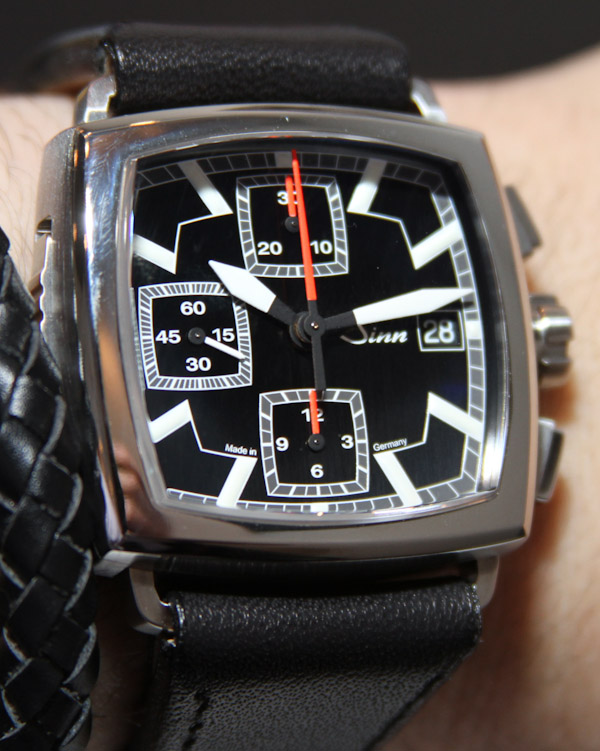 German Sinn watches are known for serious professional-use timepieces and not much else. A design-oriented novelty watch, no matter how well-made, just isn’t part of their DNA. That doesn’t mean they haven’t dabbled in fanciful things though. Who do they think they are? Fortis?… Back in 2010 I wrote about a very strange watch called Sinn 902 here. It was a sort of petite-men’s watch with a unique cushion-shaped case and a three-hand movement. It was based on a series of timepieces that Sinn produced for Audi a few years earlier. Among those Audi models was a chronograph version of the unique cushion watch.

In 2012, Sinn released a Sinn-labeled version which is very similar to the watch they produced for Audi. This model, as seen here, is the Sinn 901, and is a limited edition. It is strikingly similar to the “Audi Design Square Chronograph” from several years ago. As I mentioned before, I think that we can thank Audi for the overall design of this unique cushion-shaped tool watch. Does it have enough charm to win over traditional Sinn fans? 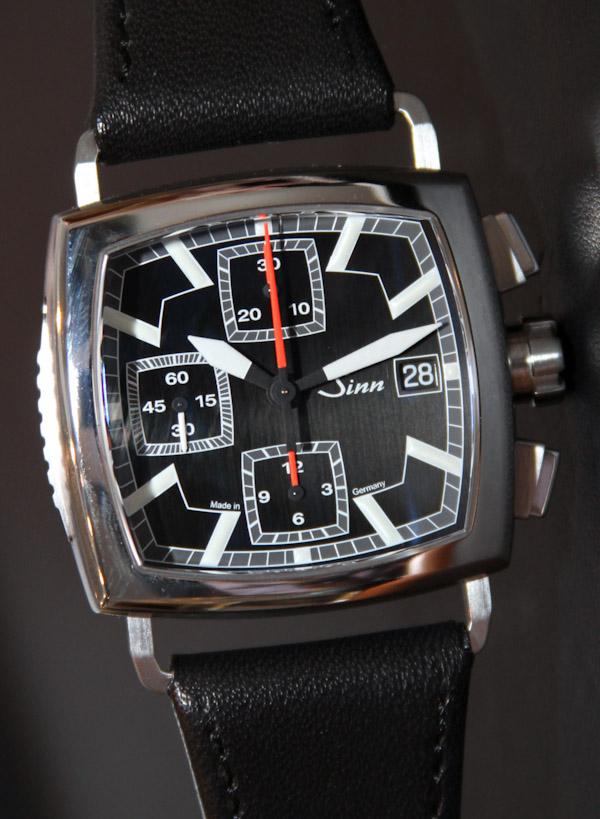 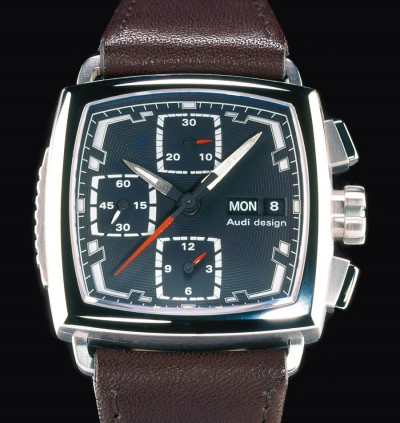 Luckily I got some hands-on time with the Modell 901 and I quite like it – more so than the three-hand 902 model. The 901’s case is 38.4mm wide in steel. It is mostly brushed for a tool-like look. Though you have a softly polished bezel which is more shiny. Sinn fans know that few if any Sinn watches have dials that you’d call “artistic.” Many are anywhere from handsome to even “pretty,” but artistic? Almost never. The 901 (and 902) has a dial that is very much a piece of art. It feels a bit mod retro futuristic, but certainly includes some art.

Compared to the 2005/2006 Audi Design Square Chronograph, the dial is a bit more refined on the Sinn model. It is thematically the same, but Sinn played with the lines and colors a bit with a pleasing result. I also like the use of Sinn’s aviator-style hands and the upgrades in dial legibility. The case is not very thin either and does wear larger than it is. Water resistance is 100 meters and while it is a durable watch, the 901 doesn’t have Sinn’s regular mix of super durability features. 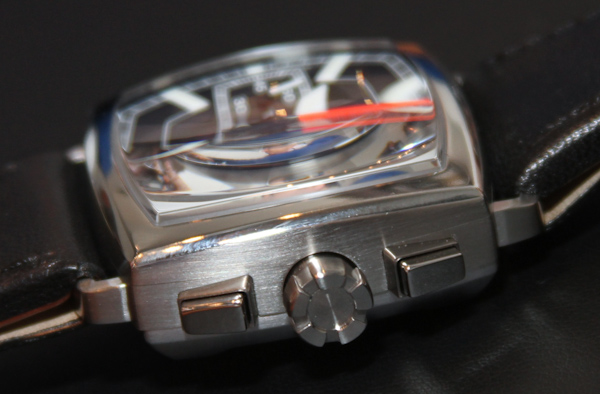 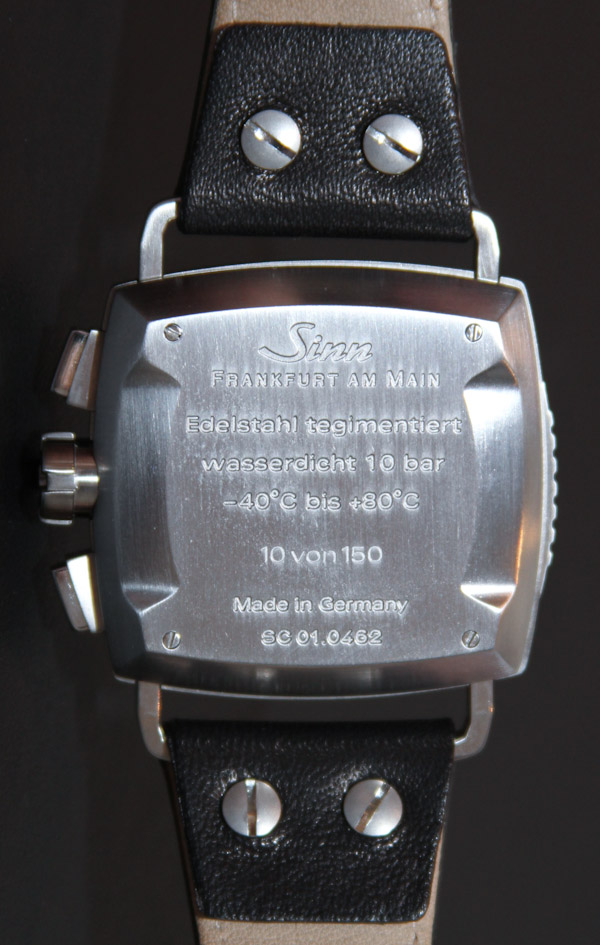 In addition to the square/cushion shape of the case, the 901’s most interesting feature is the carried-over lug adjustment system. Moving a small lever on the left side of the case extends both the lugs a little bit to give the strap a bit more wearing room. It can then be tightened up to offer a tighter feel on the wrist. As most people’s wrists expand and contract with things like temperature and humidity, micro-adjust comfort feature such as this are most welcome.

Inside the Sinn 901 is a Swiss ETA Valjoux 7750 automatic chronograph movement. Sinn doesn’t include the day window like the Audi model does, but that isn’t a very big deal. The chronograph pushers are a bit unique in their design, but that doesn’t really effect their usage. The crown is also more “designery” that most Sinn watches, but it seems to fit the overall concept of this watch. By the way, according to Sinn, they partnered with fellow German company SUG to produce the cases for these 901 and 902 watches. SUG actually makes many, but I don’t believe all, Sinn watch cases. Sinn apparently owns a large stake in SUG as well. 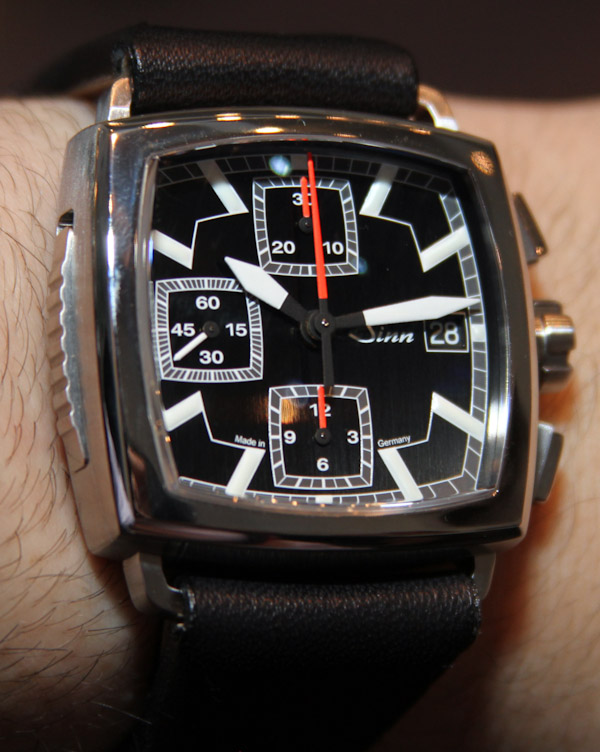 The tapered soft leather strap with inner rivets is an interesting detail and helps round-out the overall presentation of the 901. It is an extremely unique German watch in that it isn’t at all what you think of when you think of Sinn, or German watches for that matter. Still, at the end of the day it is a Sinn. That means the watch is comfortable, legible, and still seems to somehow make sense given its oddity. Though you can’t forget to give Audi a fair amount of credit for the overall design of the watch. Kudos to Sinn for keeping the tradition alive. Being limited, Sinn will only produce 150 pieces of the Modell 901 chronograph. Price is 2,800 Euros. See more at the Sinn website here.