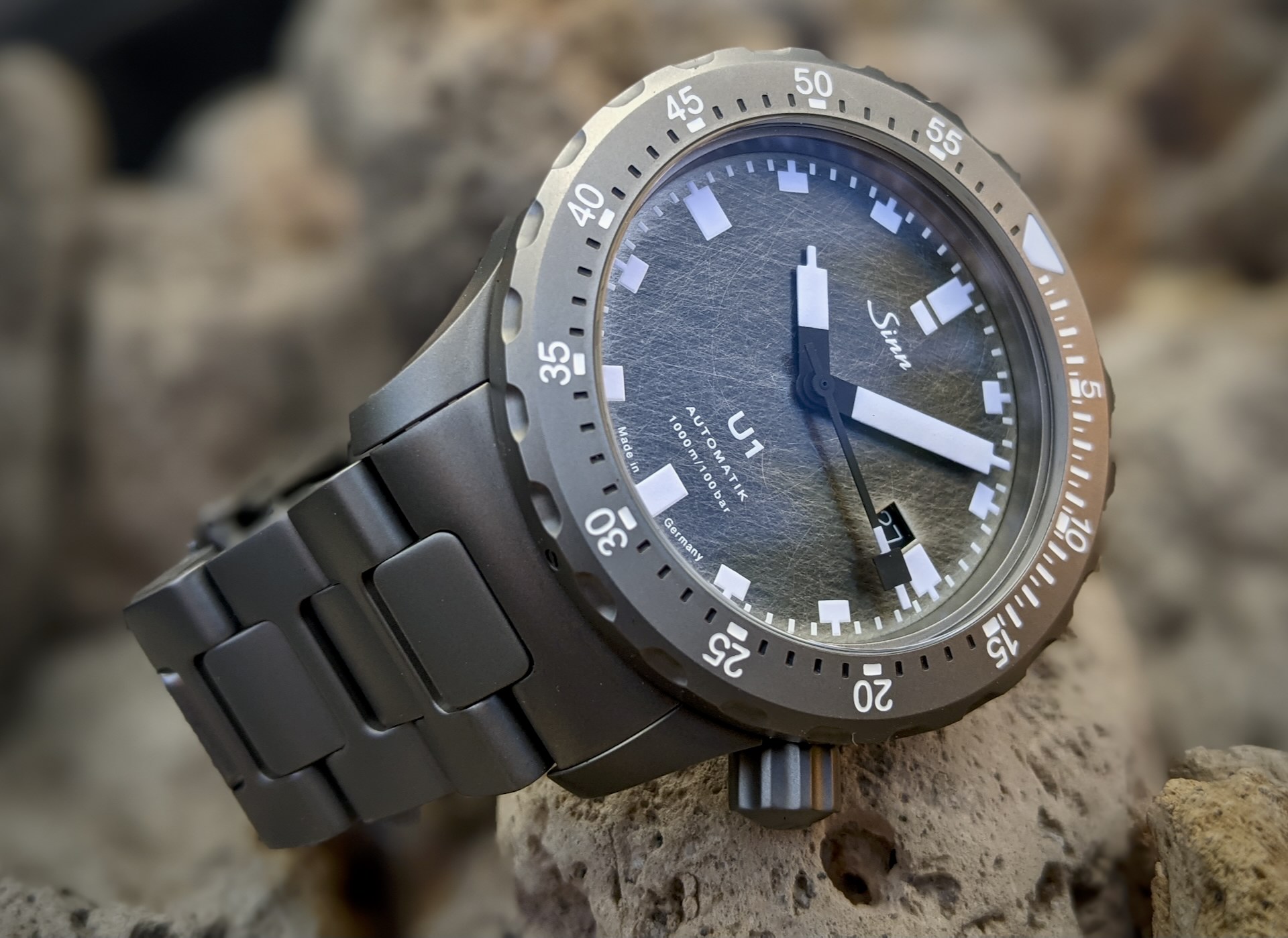 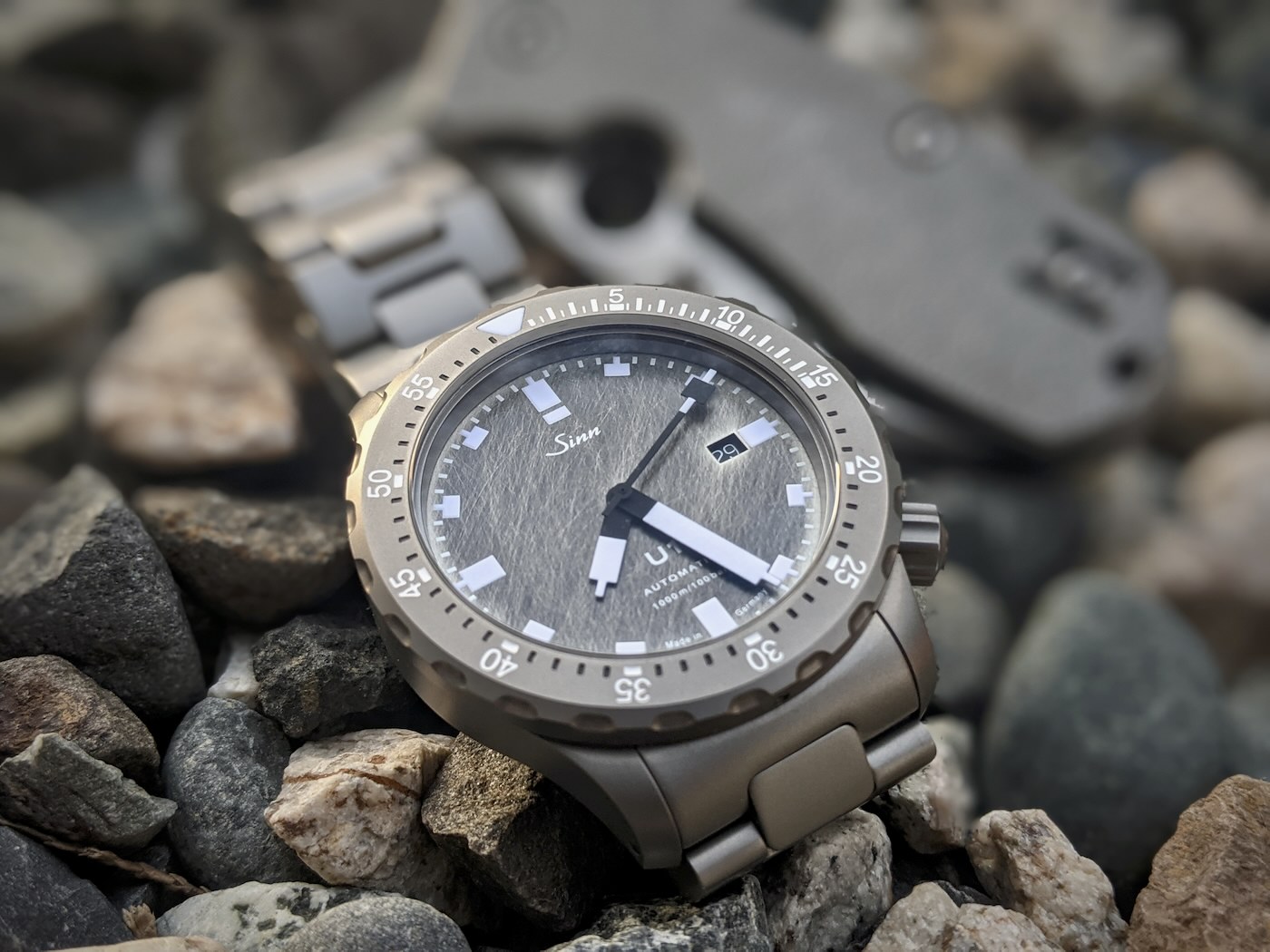 If you’re in the market for a tough-as-nails dive watch, it won’t take long before you stumble upon the venerable Sinn U1. Built from hardened submarine steel, rated to 1000m of water resistance, and unfailingly legible, the Sinn U1 has certainly earned rarified status. That said, the classic U1 is a big, bold watch, and the harsh black and red German aesthetics aren’t for everyone. Luckily, Sinn’s well aware that there are plenty of people looking for the Sinn U1’s toughness and legibility, albeit with a slightly less severe look. And that’s exactly what you get with Sinn’s limited-edition U1 DS.

The Sinn U1 DS is limited to 500 pieces worldwide, and I was lucky enough to borrow one from our friends over at J. Vair Anderson — an authorized Sinn dealer just over the Rockies from me in Calgary, AB. Given that the entire piece is surface-hardened through Sinn’s tegiment process, they weren’t terribly concerned about me causing too much damage over a few weeks of wear. 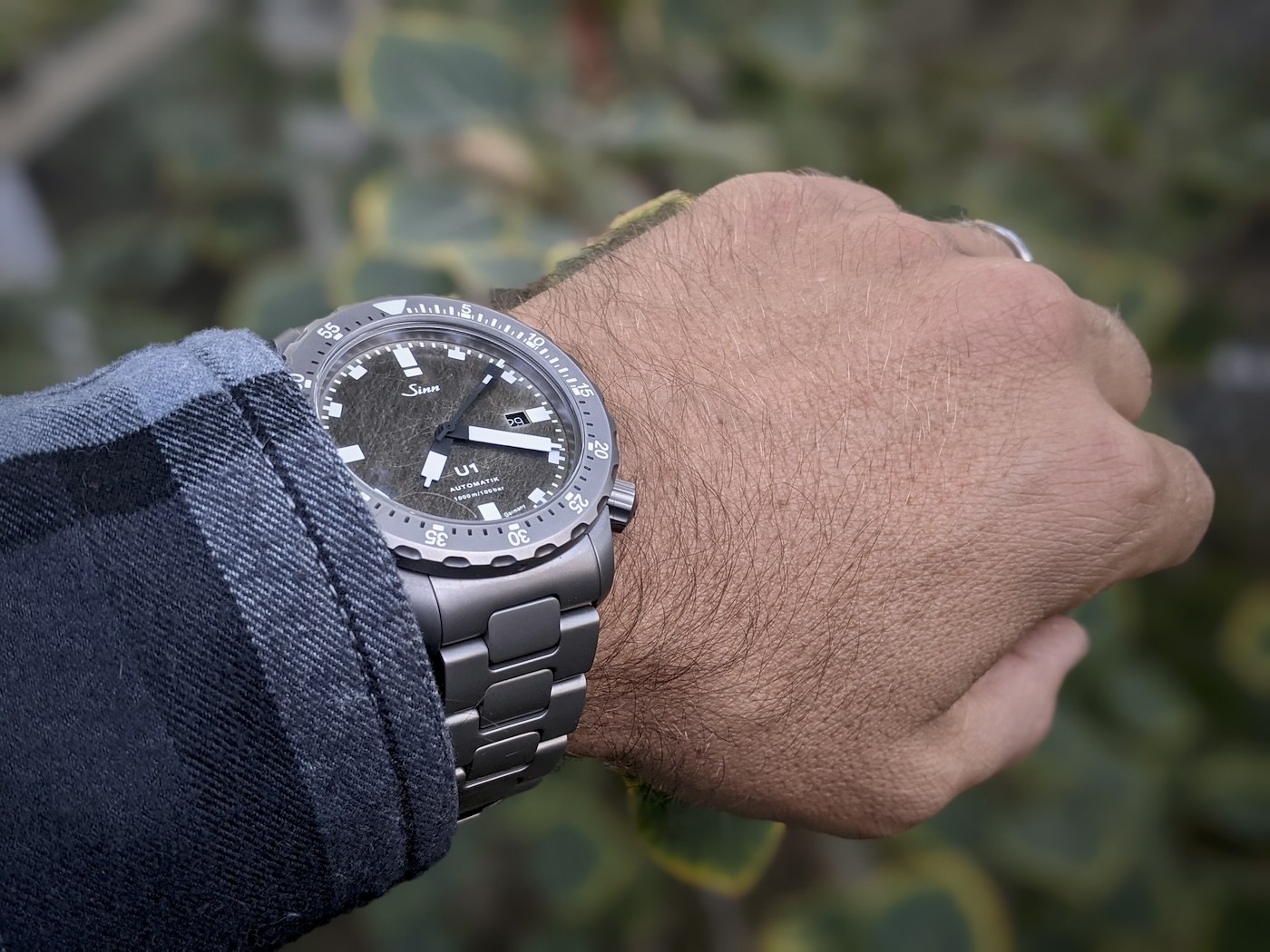 For those of you unfamiliar with the German tool watch stalwart, Sinn was founded in 1961 by German aviator and flight instructor, Helmut Sinn. His goal was to manufacture clocks and instrumentation for aviation, along with pilot chronographs. Over the ensuing decades, Sinn gained a sterling reputation for creating purpose-built watches for military and professional applications — enough so that the Sinn 140 S (a pilot chronograph) accompanied Dr. Reinhard Furrer during the D-1 Spacelab mission in 1985, the first of many Sinn watches that would head to space. In 1994, the brand was acquired by the current owner, Lothar Schmidt. As a certified engineer, Schmidt focused the brand’s energy and resources on innovative technology to make Sinn watches some of the most over-engineered, tech-laden watches in the industry. From magnetic-field protection to Ar-dehumidifying technology to extreme temperature resistance, many Sinn watches are purpose-built for specific applications (e.g., the Sinn UX S created for Germany’s commando frogman force, KSM). By creating watches for the most extreme use cases, Sinn has developed a suite of technologies and manufacturing know-how that it is able to then apply across the range. 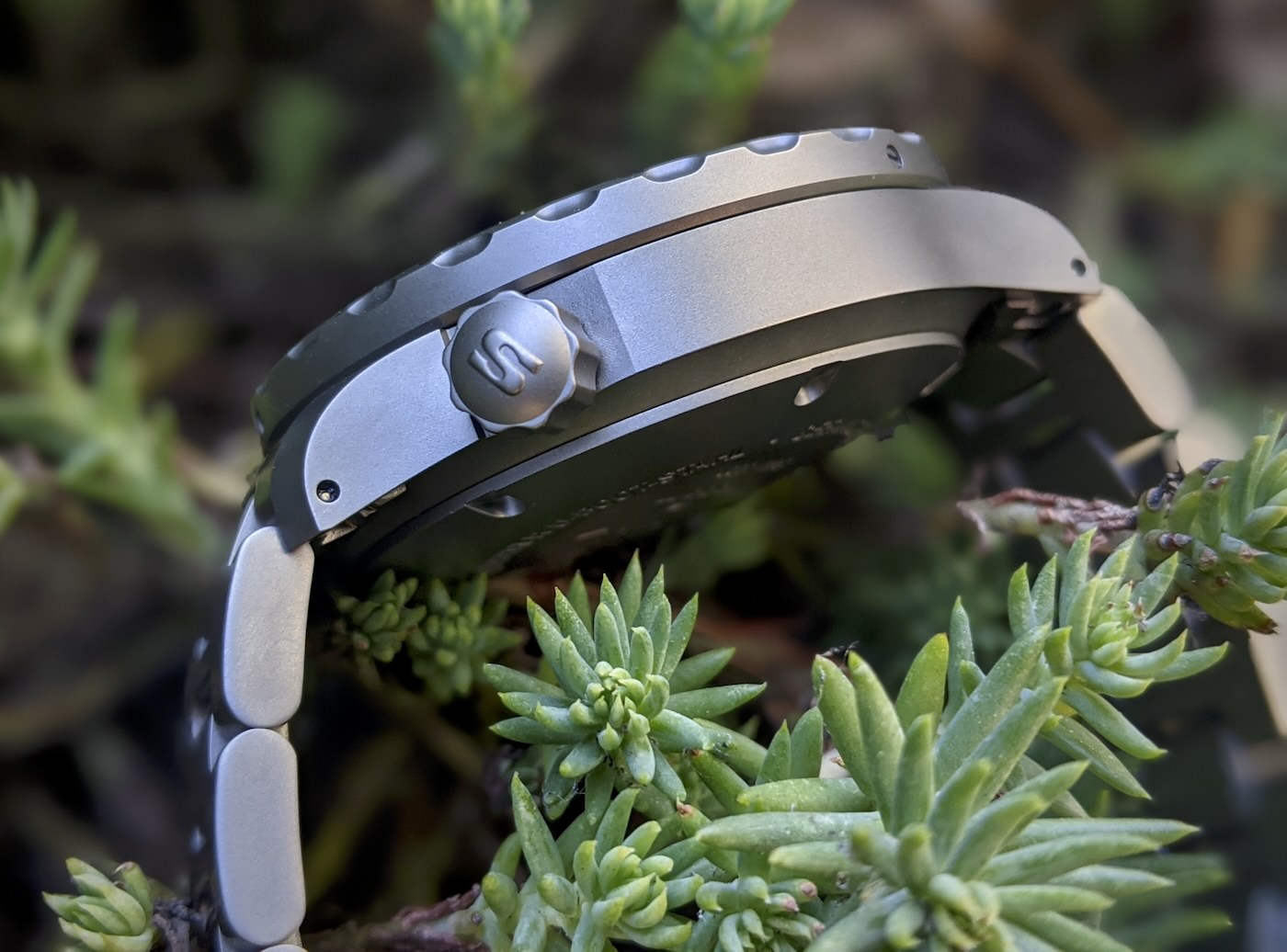 While the Sinn U1 DS doesn’t get all the fancy tech of some of the pricier options in the mission timer (EZM) series, you still get what I would argue is the most practical for most applications: a tegimented steel case, bezel, and bracelet. Sinn begins with HY-80 (submarine steel), a steel alloy similar to 316L, but with less nickel and carbon. This material is already harder than 316L (~220 HV for 316L compared to ~300 HV for Sinn’s HY-80), but the surface-hardening process takes it up to an impressive ~1500 HV. In practical terms, what this means is that it’s very difficult to scratch the case and bracelet, and it should look close-to-new for years. If you consider wabi-sabi a synonym for damage, you’ll certainly appreciate having a tegimented case and bracelet. The other bit of tech that Sinn sneaks in is a captive diver’s bezel. Take a look at the edge of the bezel, and you’ll see three screws that hold the bezel captive (hence, the name). Just a bit of added security knowing that the bezel won’t be inadvertently dislodged. Speaking of the bezel, each of the clicks is solid and secure, feeling more like a piece of purpose-built equipment than precision-machined jewelry. Aside from the tech, Sinn adds a few practical details that make a big difference in the wearing experience — drilled lugs for quick and easy strap changes and a crown at 4 o’clock for wearing comfort. 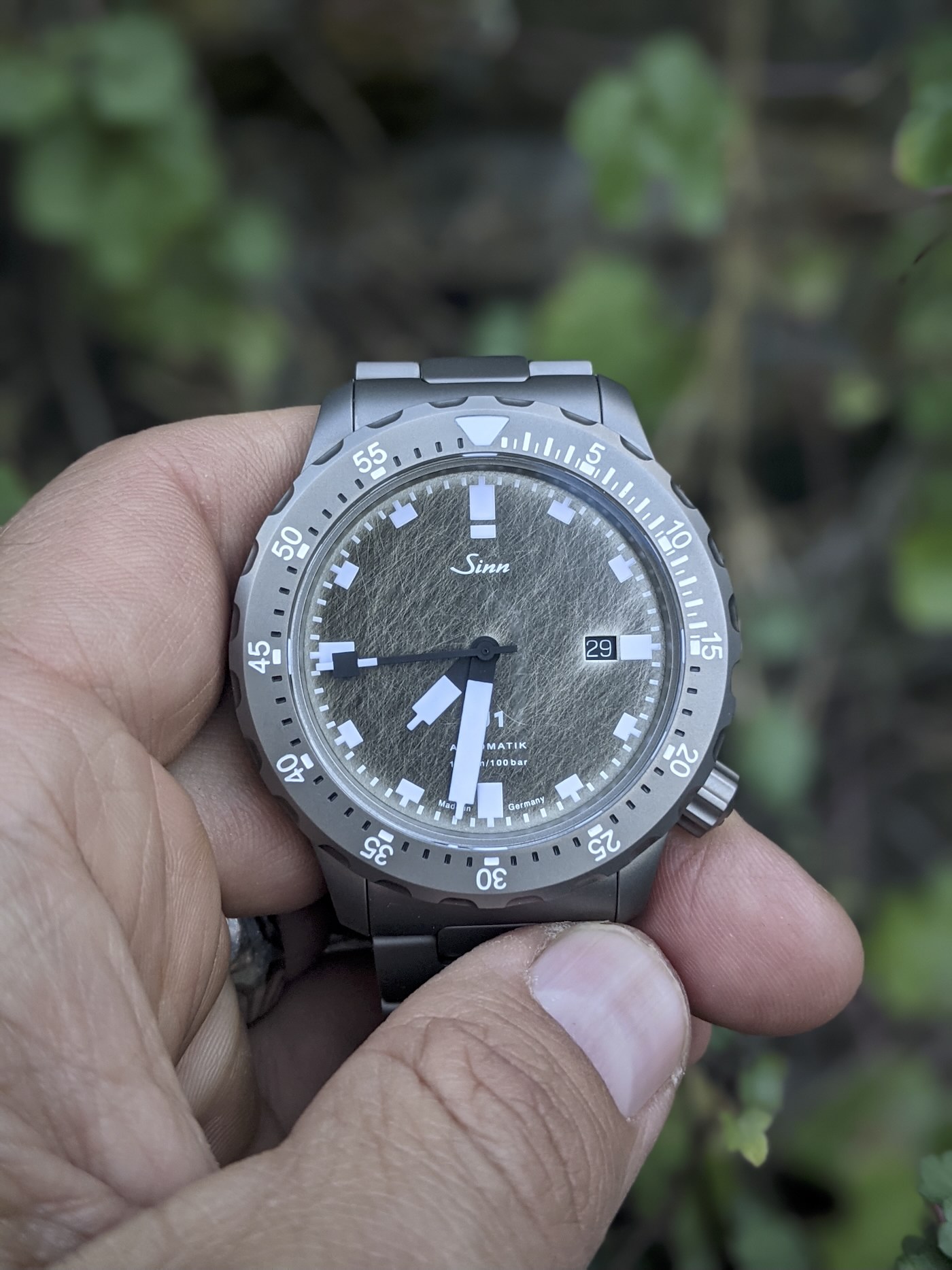 With a 6.75” wrist, I typically try to stay under 42mm with my watches, but the short 47mm lug-to-lug measurement on the 44mm diameter (15mm height) case allows the U1 DS to wear large, but comfortably. Sure, it looks all of its 44mm, but it doesn’t feel ungainly on my wrist. Just hefty. All this submarine steel in a 44mm case coupled with a 22mm bracelet does come at a bit of a cost in terms of weight. If you like heft, you get it in spades. If, on the other hand, you’re used to lighter watches (like my featherweight titanium Sinn T2B), it takes some getting used to. Personally, I find the weight a bit much for all-day wear, and if this was my personal watch, I’d swap out the bracelet for something like a gray NATO or Sinn’s fantastic silicone strap with a tegimented buckle. 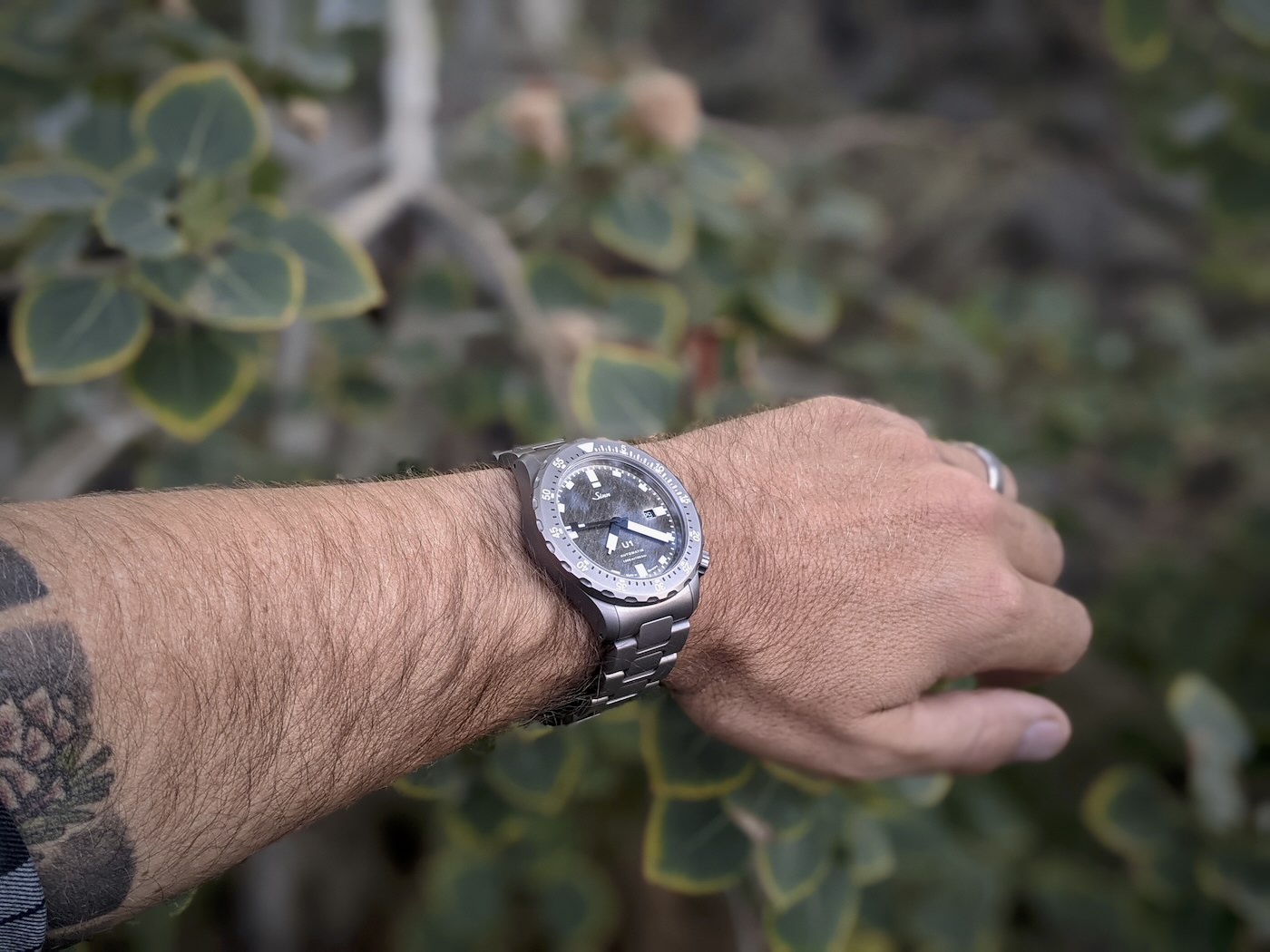 Partly due to the submarine steel and partly due to the tegimenting process, the bead-blasted case of the Sinn U1 DS has a darker hue than a typical 316L steel that’s actually quite similar to titanium. That dark hue is a perfect match for the über-functional U1, especially with the monochrome colorway of the limited edition DS. The classic U1 has a black dial with white hands/markers and strong red highlights throughout. Personally, I love the aesthetic of the so-called Lego hands and markers, but I’ve never been a fan of the red accents. In what seems like a contradiction, by removing the red highlights and adding white to the bezel numerals, Sinn manages to make the U1 DS appear warmer and less severe. Odd, I know, but it really does feel that way. Sinn hasn’t sacrificed any of the practical legibility of the U1 with this limited edition aside from the black minutes hand, which obviously doesn’t pop like the red on the classic U1. 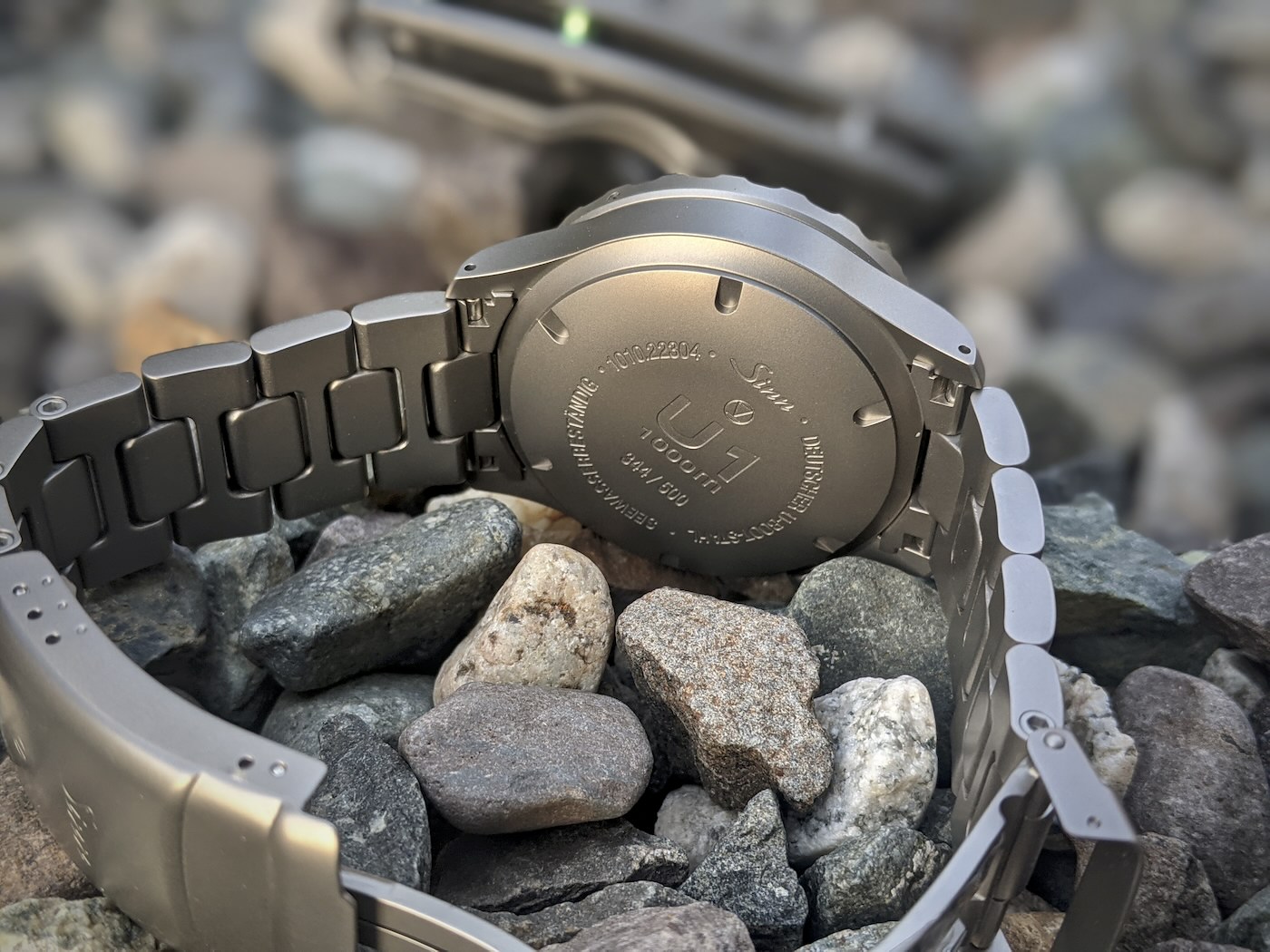 Let’s finally get to the star of the show: the dial. Sinn describes the dial on the U1 DS as having “decorative grinding.” It’s a textured, distressed gray that looks right at home on this dial, especially when coupled with the black and white accents. I have no idea what DS stands for, but in my head I kept thinking “distressed steel.” I’m probably wrong there — it almost certainly stands for a 25-letter German word — but it’s a fitting description. 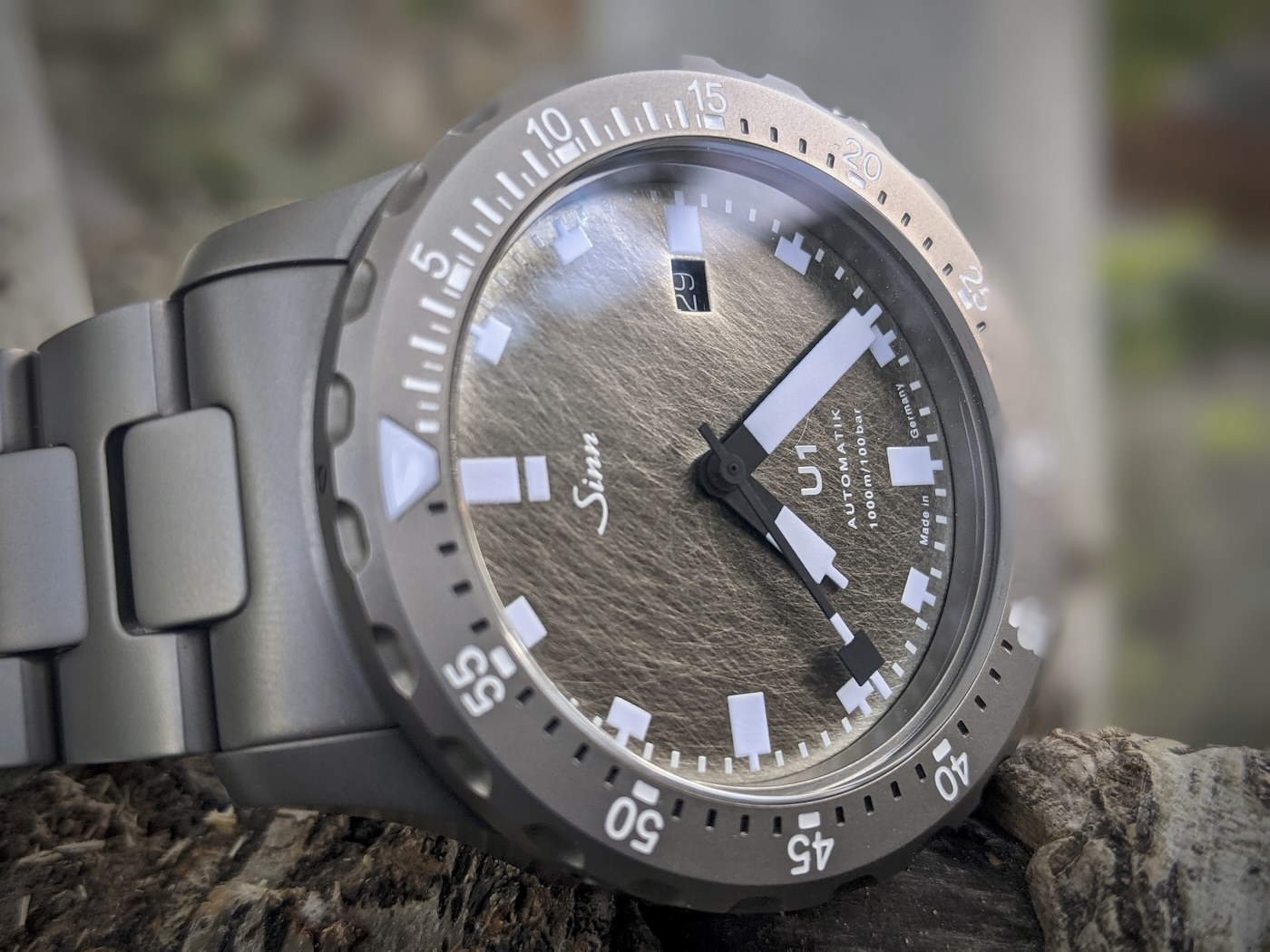 Wearing the watch, it’s hard not to be distracted by the dial. The color and texture shifts with the light, moving from a dark gunmetal to pale gray, with a texture that can look almost like sharkskin in the right light, or more like sanding scratches in other light. Either way, the hue is warmer than expected with occasional hints of earthy brown tones sometimes (but don’t get me wrong, this is absolutely a gray dial). Textured dials seem to be on the rise this year, but the dial on the U1 DS stands out in its execution. In addition, each dial is unique due to the decorative grinding process used to create the texture. 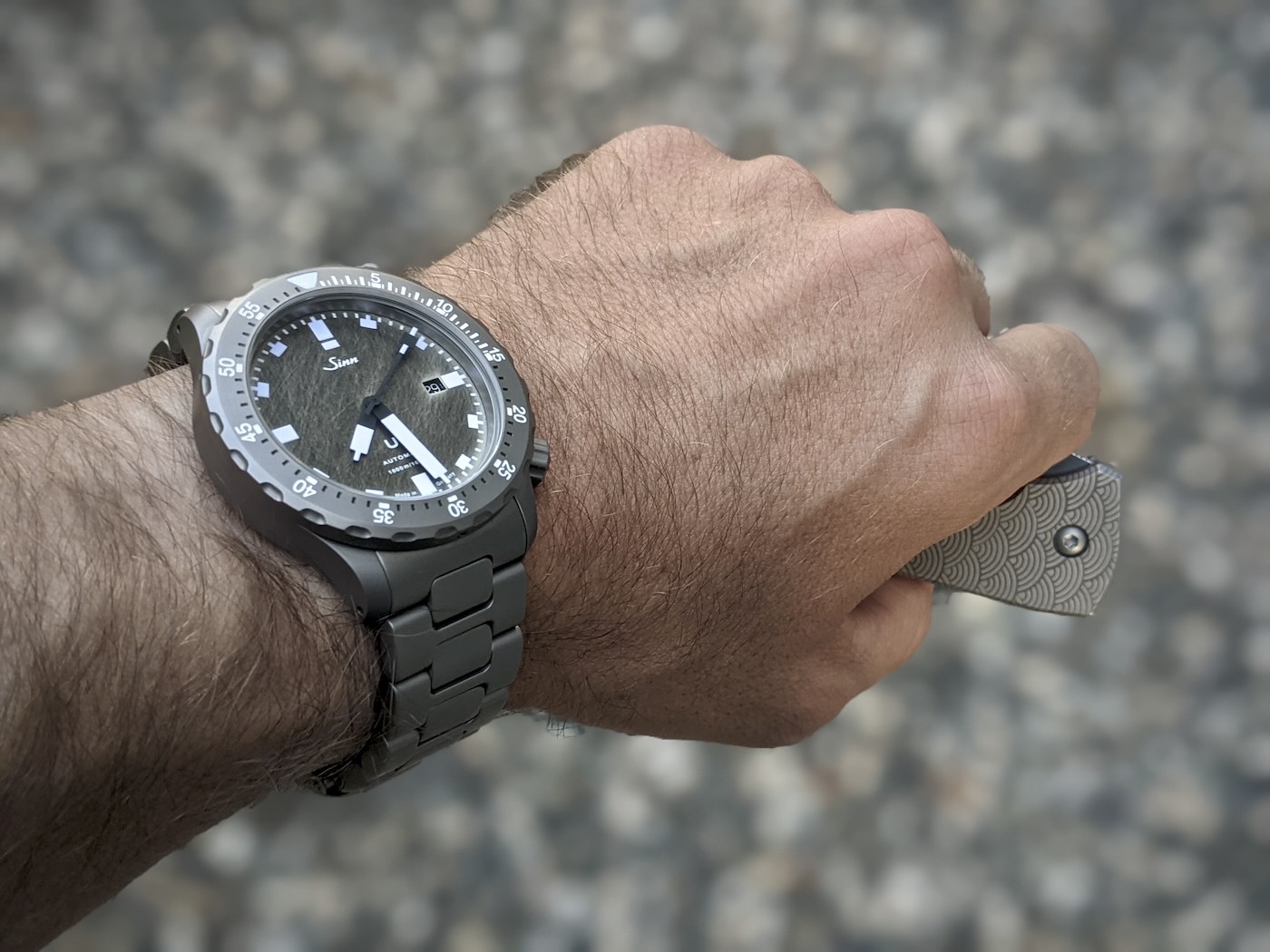 The bracelet is 22mm with a slight taper down to 20mm at the clasp, which enhances the visual (and physical) heft of the watch. When it comes to Sinn’s bracelets, I’m of two minds. I love the soft lines of the H-link construction and always find Sinn bracelets comfortable. The links are secured by two hex screws (two wrenches are included to resize the links), making sizing without scratching the sides of the bracelet or marring the screw head a breeze. So, construction and comfort are great, but, as always, Sinn bracelets are let down by their clasps. Made from simple stamped metal with a diver’s extension, micro-adjust holes, and fold-over safety claps, it’s a perfectly functional mechanism that works as intended. At this price point, however, I want to see a milled clasp with on-the-fly adjustment. This is especially true since Sinn can absolutely make a killer clasp — just check out the bombproof clasps on its silicone straps. 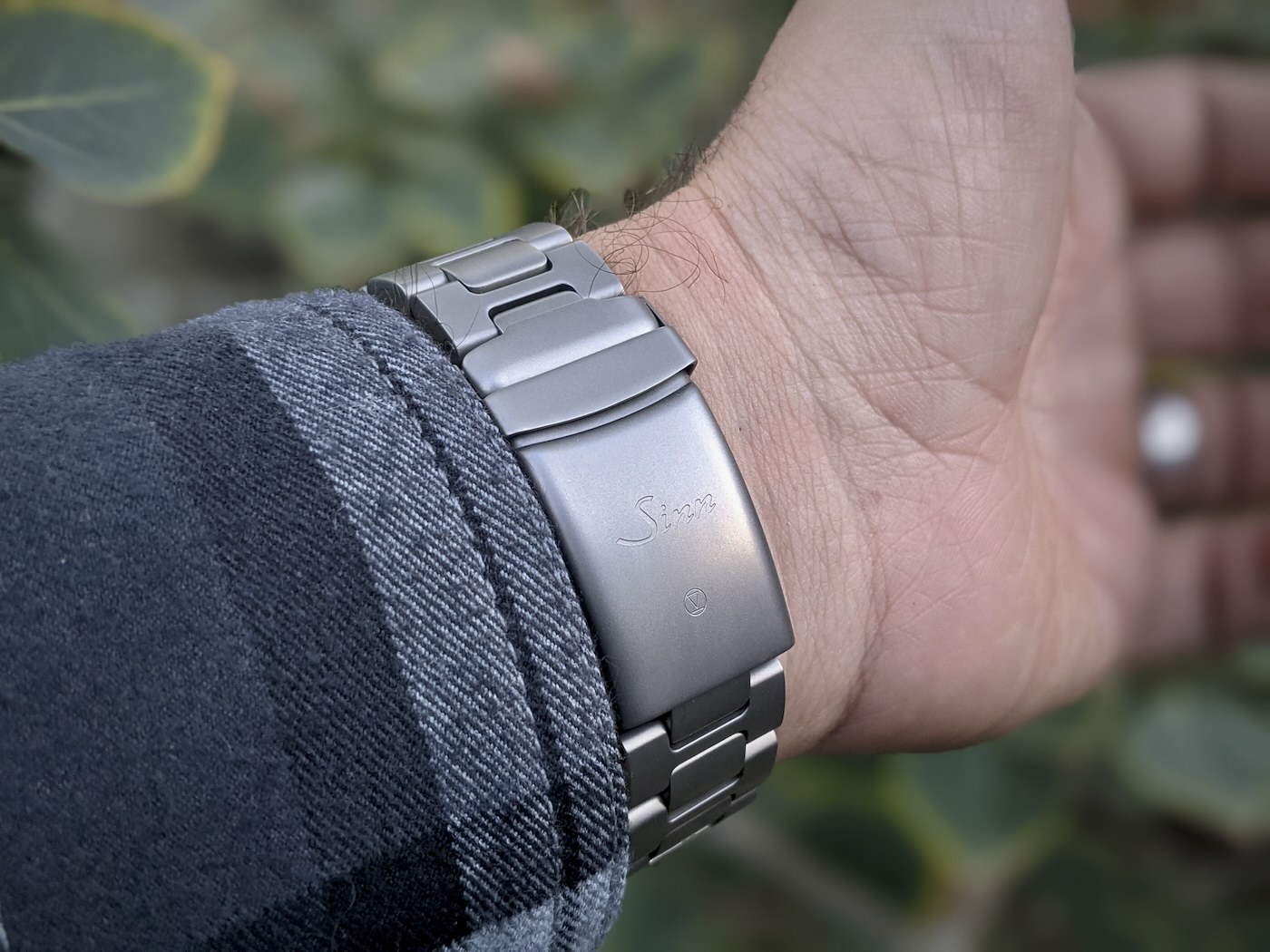 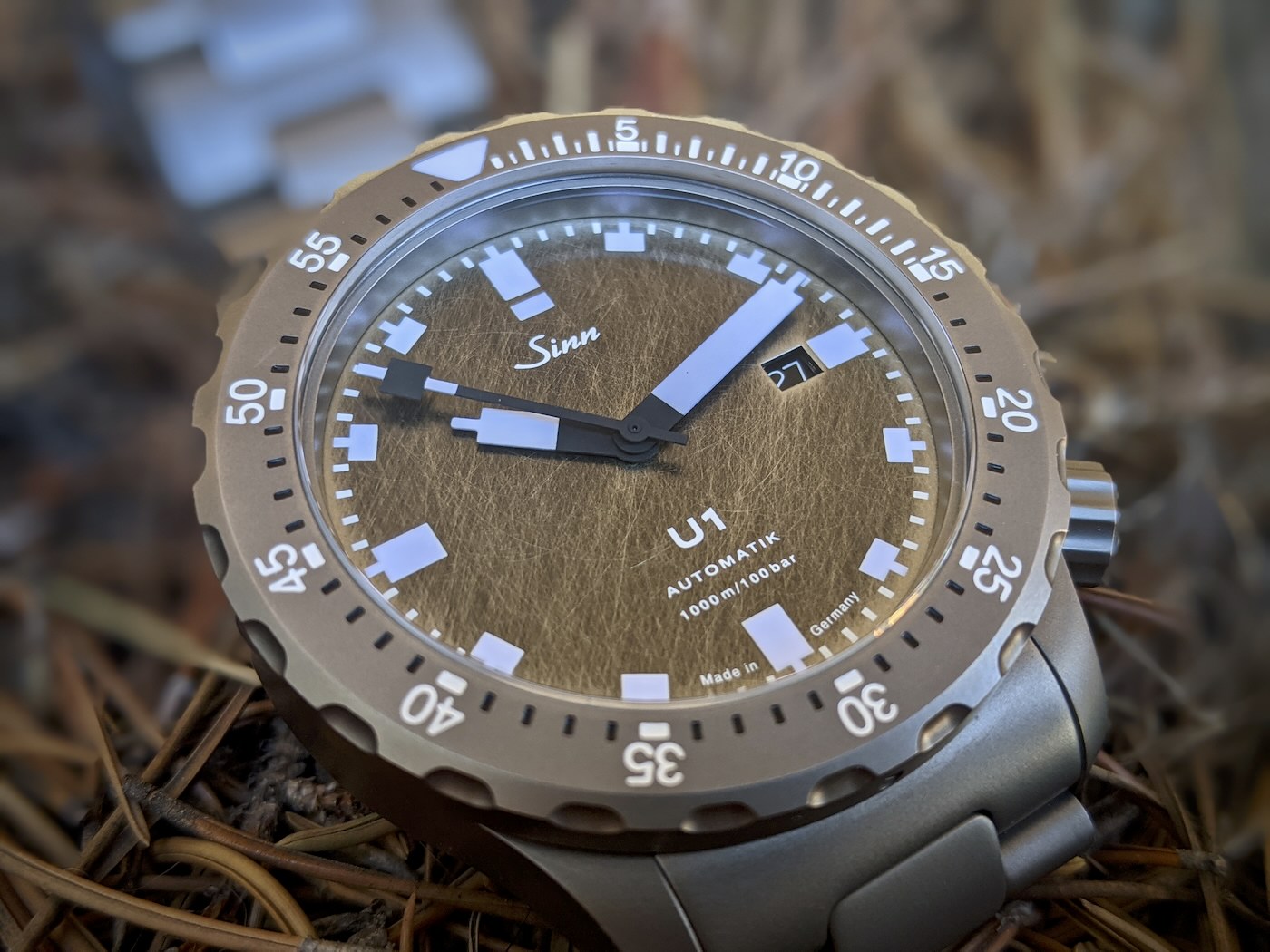 When it comes to alternatives, there’s no shortage of tough, reliable tool watches on the market. That said, there’s really only one Sinn U1, and there’s a reason it’s so adored. Count me among its many fans. Luckily, Sinn realizes that the black and red color scheme isn’t for everyone and has put out a number of limited edition colorways over the years. Personally, I find this release to be one of the most appealing in terms of aesthetics and execution. The dial is unique and eye-catching, and the white accents give the watch a distinct and less severe look. With my smaller wrist, I’d love to see this release in the U50’s 41mm case, but despite the U1’s large size, the dimensions will still work for a wide range of wrists. The Sinn U1 DS is available now for $2,850 USD. For more information on the Sinn U1 DS, be sure to visit the brand’s website.

Necessary Data
>Brand: Sinn
>Model: U1 DS
>Price: $2,850 on bracelet
>Size: 44mm-wide, 15mm-thick, 47mm lug-to-lug, 22mm lug-width.
>When reviewer would personally wear it: Outdoors, at the beach, or anytime I’m looking for a rugged watch that will stand up to more than I can.
>Friend we’d recommend it to first: Outdoorsy type that’s a fan of over-engineered watches.
>Best characteristic of watch: Dial and complementary white accents.
>Worst characteristic of watch: It’s a hefty watch on the wrist, and Sinn needs to improve its bracelet clasps.