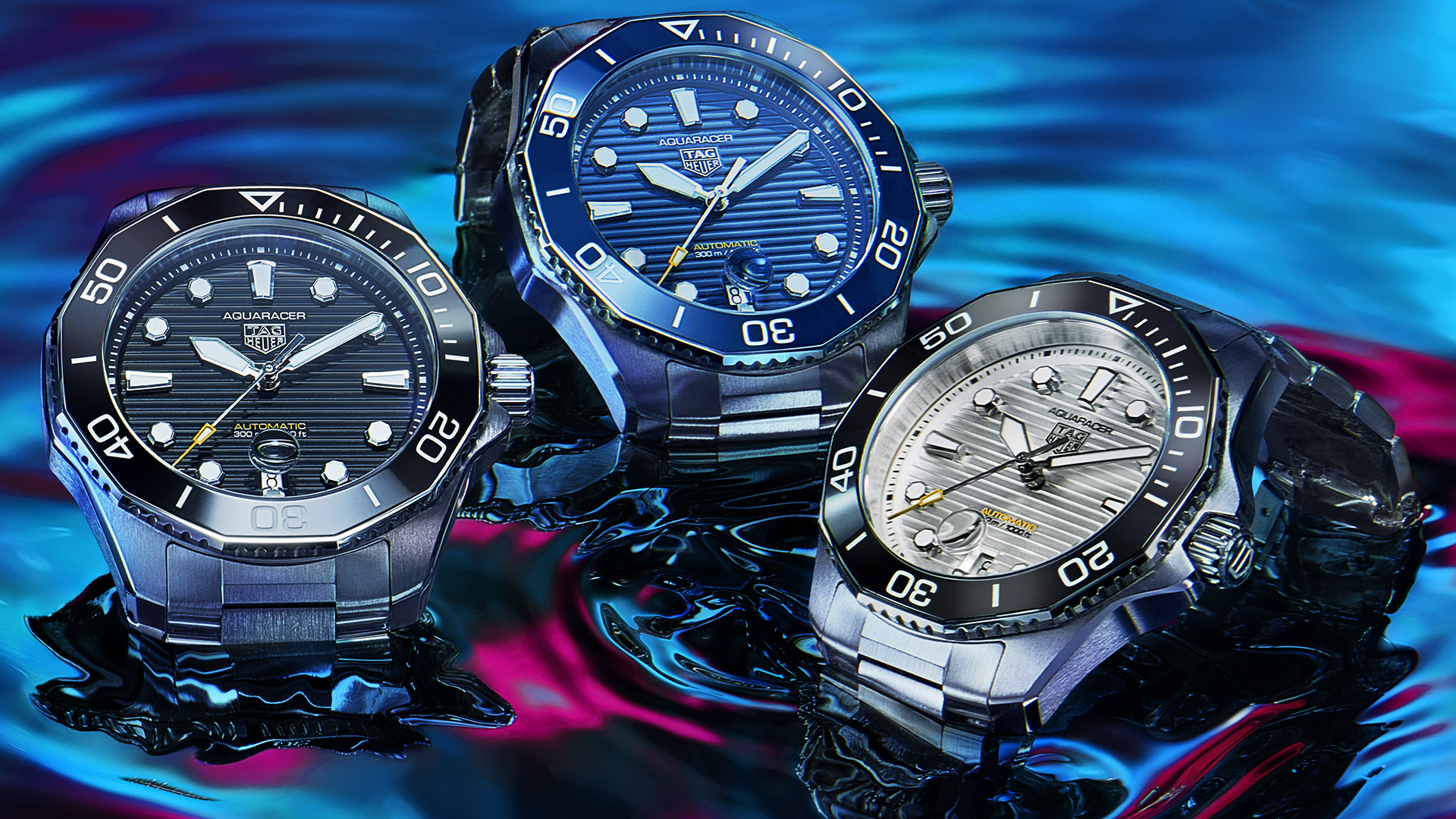 In the massive and high-profile arena of mainstream luxury dive watches, the TAG Heuer Aquaracer has been something of a perennial dark horse. With a more modernist design philosophy and without the lengthy heritage surrounding of some of its rival nameplates, it’s a line that has rarely led discussions surrounding divers or even the brand’s own watches despite a track record of quality and often impressive value. As TAG Heuer shapes its core product lines for the 2020s, however, the marque has heavily reinvented the core Aquaracer series with a design that doubles down on several defining Aquaracer cues while softening others for a more balanced and mature look. The new TAG Heuer Aquaracer Professional 300 series sports five distinctive 43mm models, including the vintage inspired limited edition TAG Heuer Aquaracer Professional 300 Tribute to Ref. 844, that bring a clean and distinctively angular new ethos to the series. 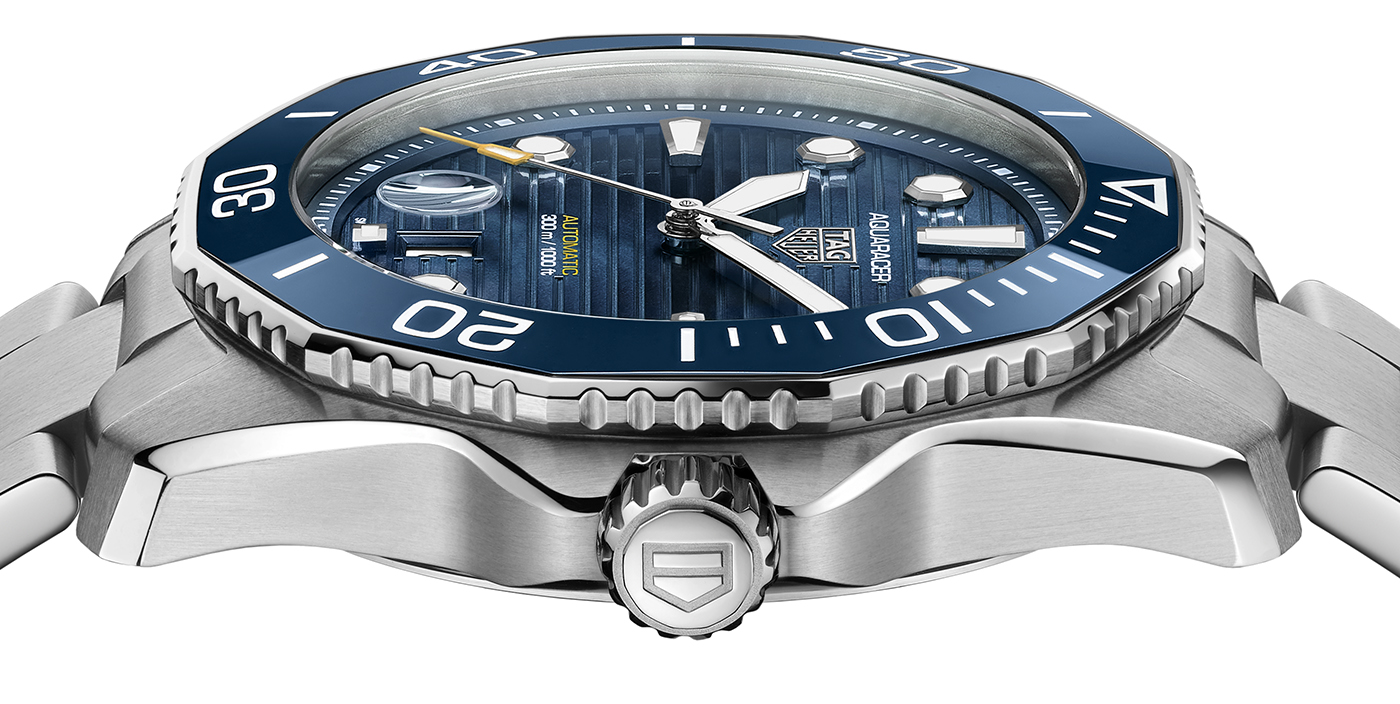 The 43mm case of the new TAG Heuer Aquaracer Professional 300 series is still instantly recognizable as an Aquaracer, but substantially refines the look over previous generations. The overall design is still angular and modern, with traditionally curved forms translated into flat planes and abrupt corners. Where this new case really sets itself apart from its predecessors is through the case sides, where the fully polished flat surface has been changed to a brushed finish with a wide polished chamfer running from lug to lug. This breaks up the case sides visually and creates the illusion of a thinner case profile in images, although the actual case thickness is only marginally reduced by 0.35mm to 12.2mm overall. Like with last year’s revised Carrera Sport Chronograph, many of the geometric changes here are designed to make the large-on-paper 43mm diameter wear more compact than the numbers suggest, and a large component of this is the new lug geometry. In addition to the slimming addition of the chamfer, the lugs themselves are markedly shorter than the previous generation, which will likely lead to a more compact footprint on the wrist for most wearers. 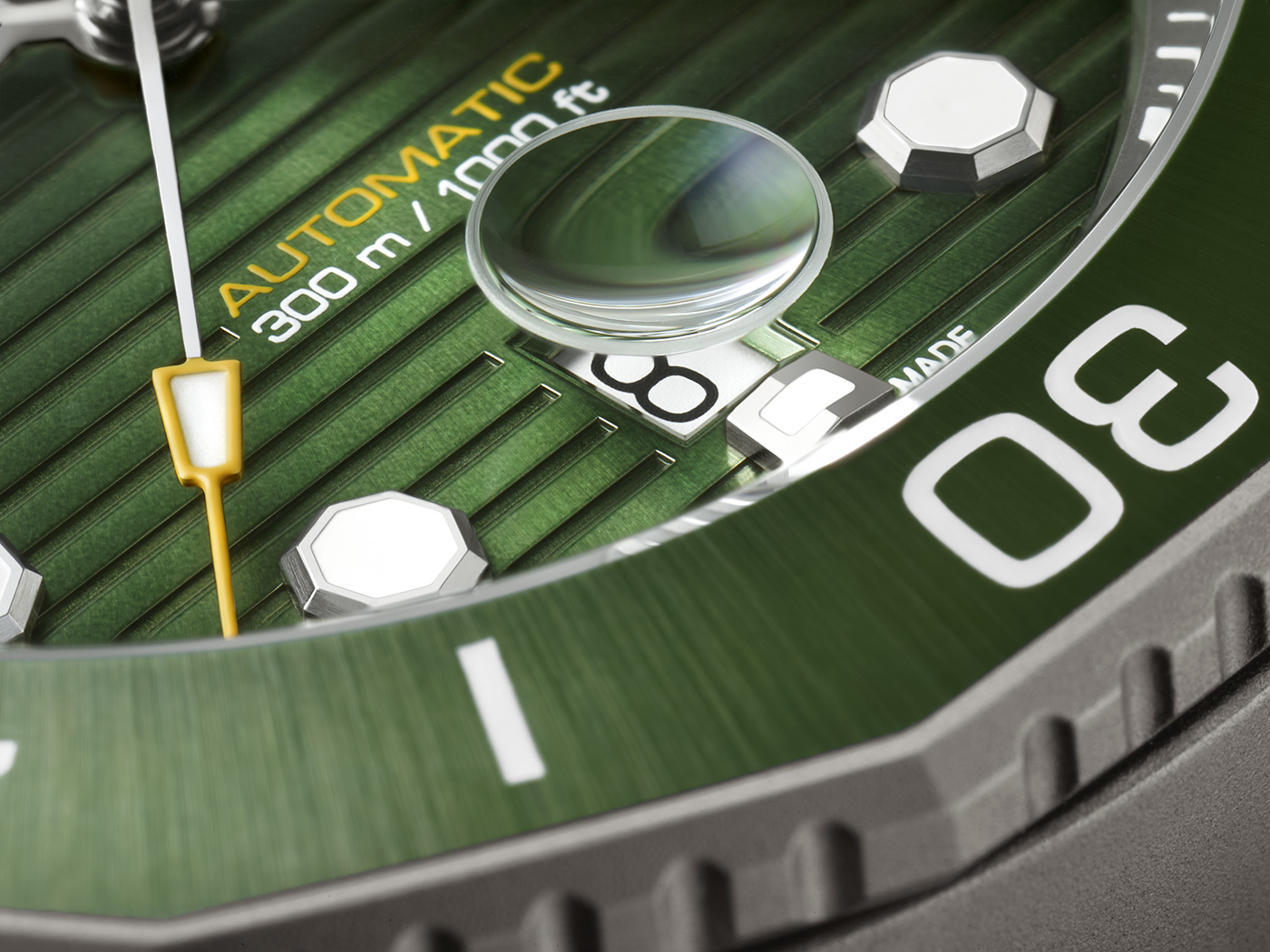 The other major visual change for this new generation comes courtesy of the Aquaracer’s signature 12 sided bezel. The bezel itself is now fully coin edged for a simpler look and improved grip, while the inserts in black, blue, or green are now ceramic across the line. This move to ceramic brings the Aquaracer more in line with its modern competition, but together with the new bezel edge reframes much of the design as a much more orthodox affair. The overall impression from the case design is less the yachting-inflected mix of luxury and aggression of previous generations, and more of a low-poly take on classic diver cues. This is charming and charismatic in its own way, like a dive watch rendered with the graphical capability of a PlayStation 2, and should appeal to a wider audience than the idiosyncratic feel of previous models. TAG Heuer itself leans into this angular computer-graphic ethos with its revised caseback, which revamps the Aquaracer’s signature dive helmet engraving with a sharply edged new look. The only curved lines on this new case come through the new cyclops date magnifier on top of the sapphire crystal at 6 o’clock. 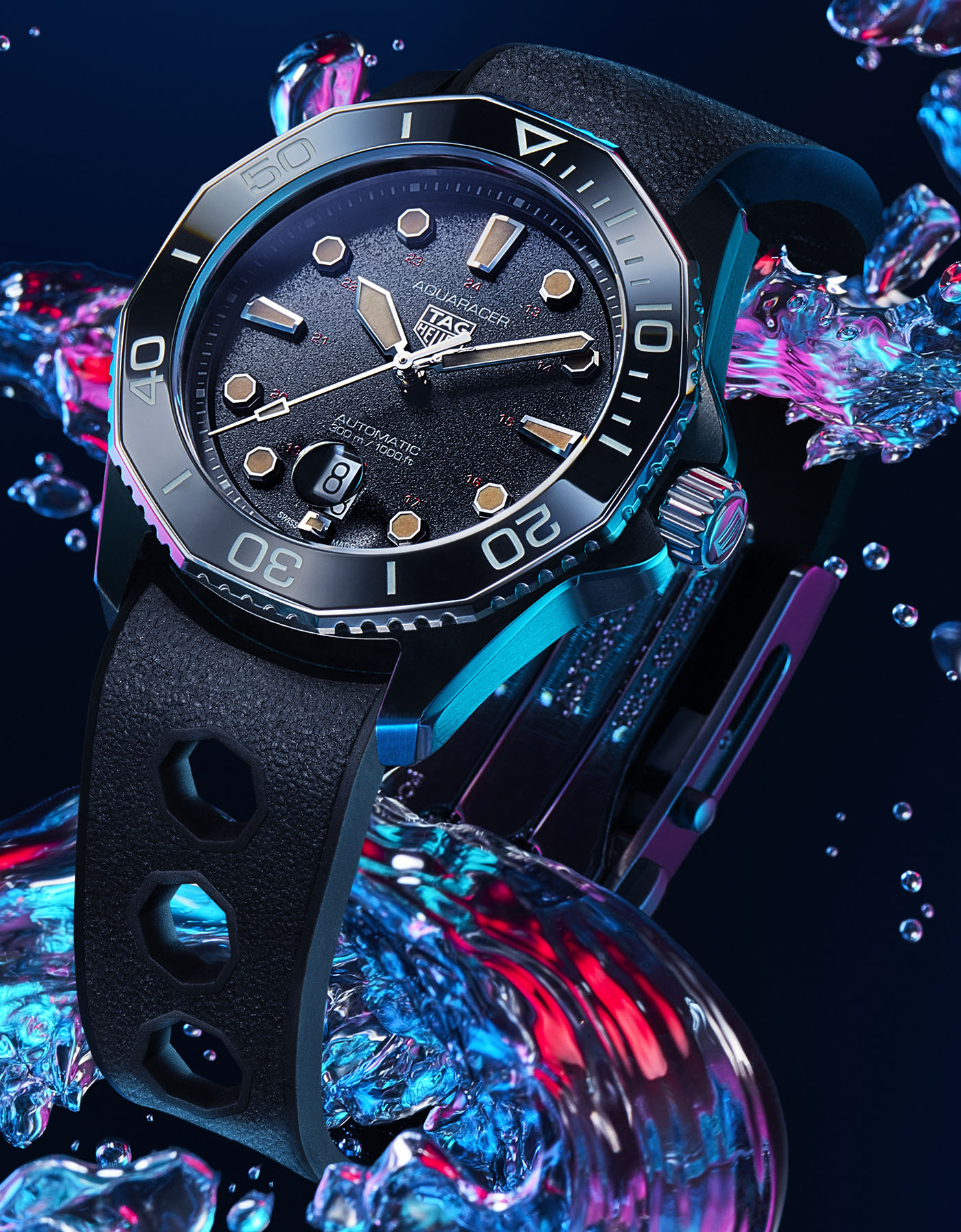 While the core three models of the new collection render this new case form in a blend of polished and sporty brushed stainless steel, the green dial variant sets itself apart with a matte bead blasted finish in dark Grade 2 titanium. For the limited edition Aquaracer Professional 300 Tribute to Ref. 844, TAG Heuer keeps a suitably old-school pairing of black bezel and stainless steel case. Regardless of material or finishing, all new models in the TAG Heuer Aquaracer Professional 300 series are water resistant to a robust 300 meters. 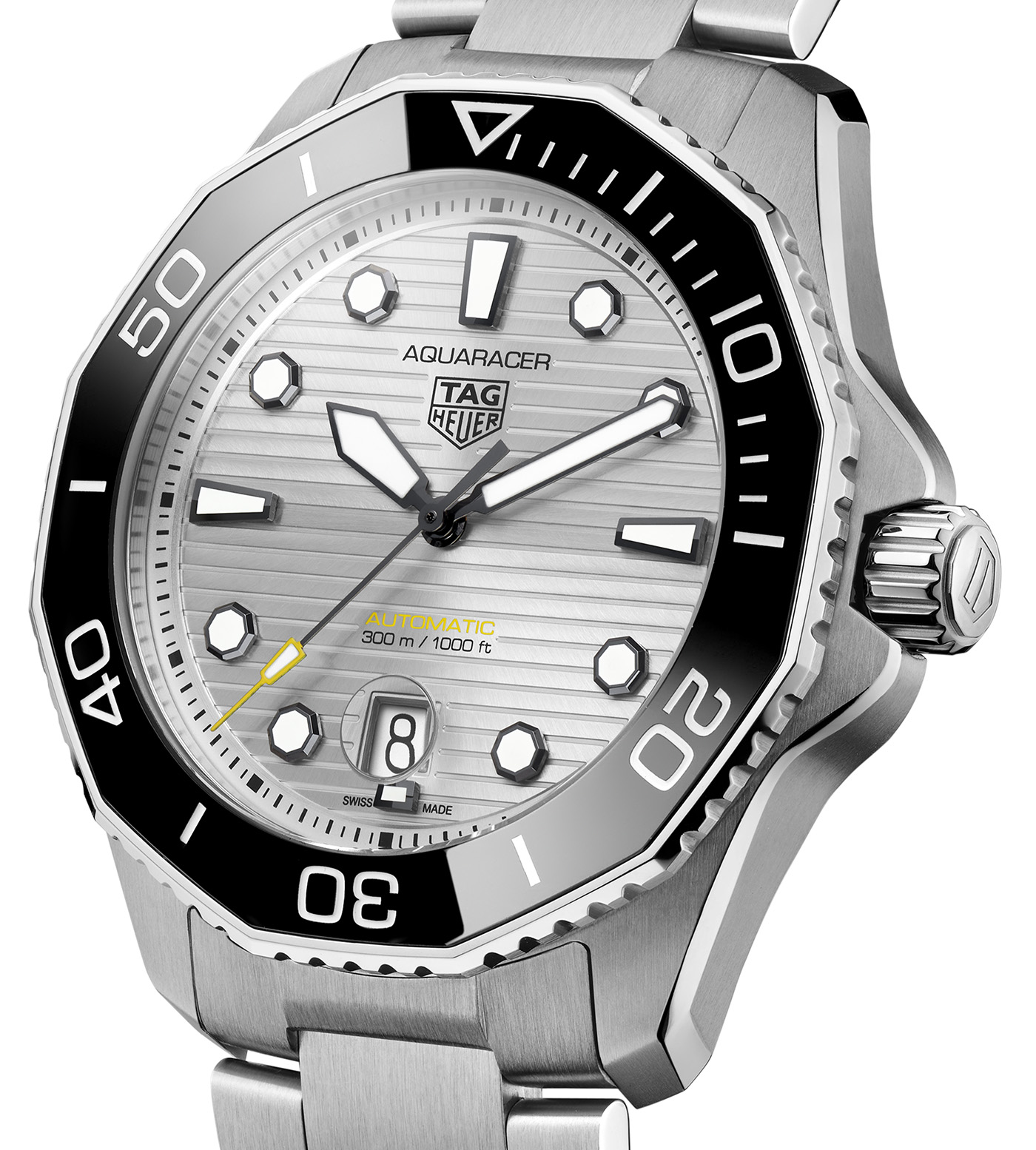 Like the cases, the dials of the new TAG Heuer Aquaracer Professional 300 line maintain recognizable Aquaracer cues while evolving the overall design significantly. The sunburst dials in black, blue, green, and bright silver keep the Aquaracer’s trademark horizontal engraved lines, but here the ridged sections are wider and less numerous for a cleaner feel. TAG Heuer unifies the angular design of the case with the dial through its new set of applied diver indices, which replace the classic round markers with octagonal pieces. Combined with the beveled wedge-shaped indices at 12 o’clock, 3 o’clock, and 9 o’clock, these new markers give a touch of unique personality to the line and further sell the funky low-resolution computer generated effect. The handset is also extensively reworked, replacing the complex paddle designs of the previous generation with a classic set of Roman swords. The seconds hand keeps the Aquaracer’s distinctive wedge shaped tip, however, with a punch of vibrant yellow that adds a dramatic visual highlight. TAG Heuer prioritizes easy legibility with its Super-LumiNova lume fill here, as the critical minutes and seconds hands immediately stand out with a blue glow against the green used for the rest of the dial. Balance is a visual priority for these new dials as well, as TAG Heuer moves the date window to 6 o’clock to preserve symmetry. 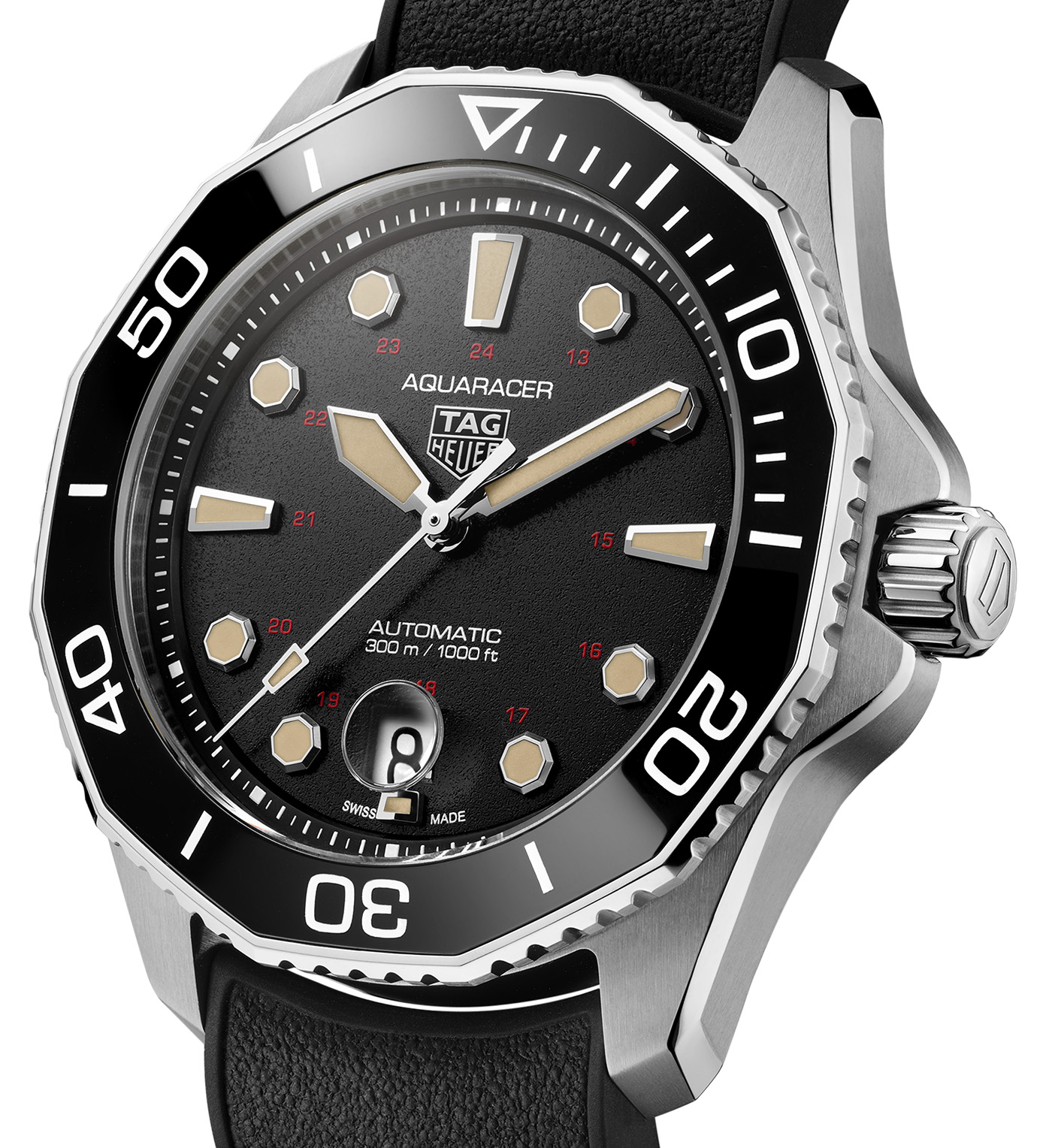 In order to echo the classic Heuer Ref. 844 diver from 1978, the dial of the limited edition TAG Heuer Aquaracer Professional 300 Tribute to Ref. 844 differs sharply from its stablemates. The engraved sunburst dial surface is ditched in favor of a heavily grained matte black here, while the lume fill is a warm khaki fauxtina. The Tribute to Ref. 844 adds an extra splash of color to the look with an internal 24 hour scale in deep red, calling back to the 1978 model while adding some useful function. These changes add up to a markedly different effect from regular production models, creating an intriguing blend of old and new that reads less as a vintage reissue than a retro-modern revival. 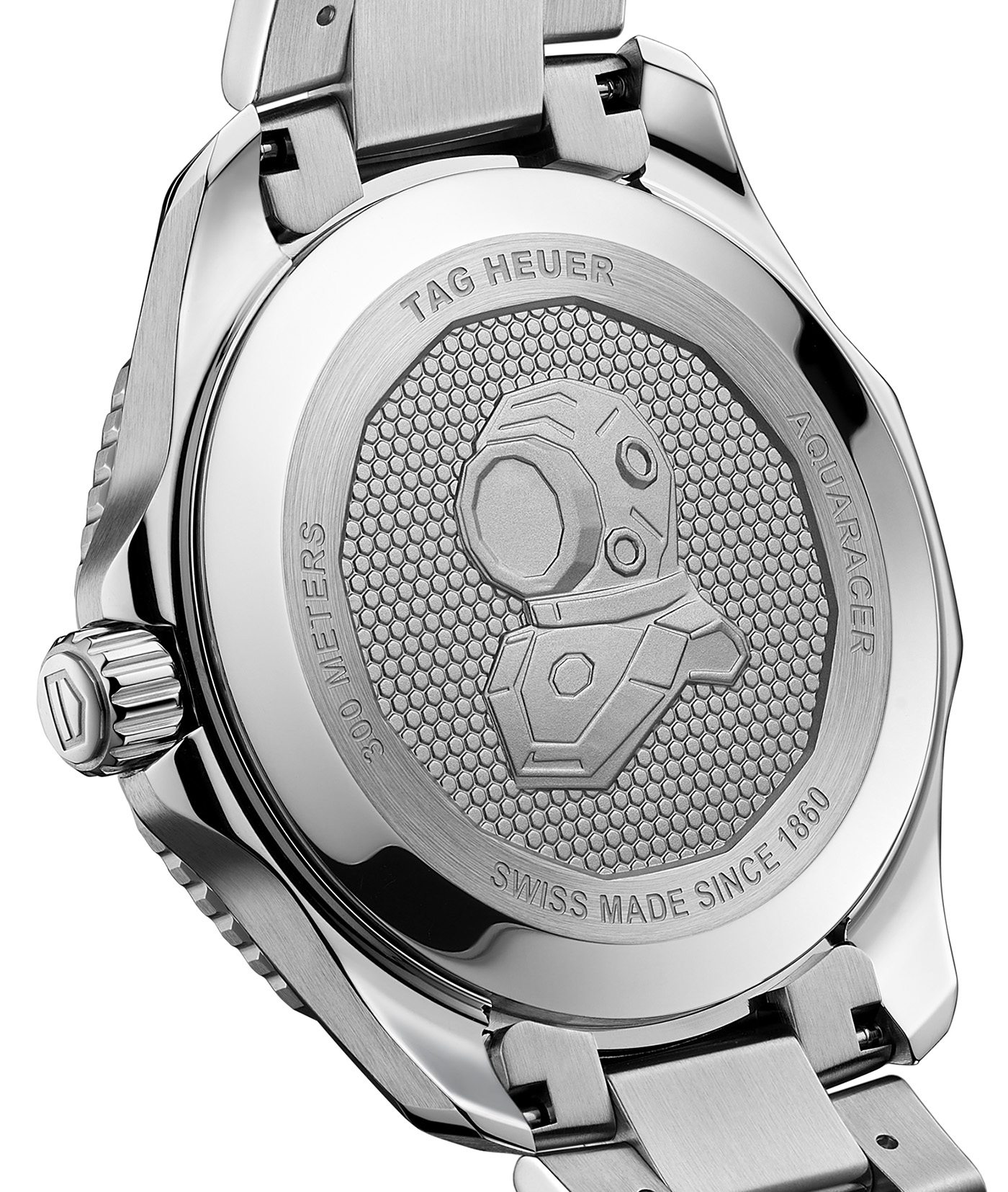 All models in the TAG Heuer Aquaracer Professional 300 line are powered by the ETA based Calibre 5 automatic movement. While a reliable and easily maintained powerplant, this movement may become something of an Achilles heel for the line as most of its competitors currently sport in-house designs. The Caliber 5 is a bit long in the tooth compared to much of the segment, and its performance is in line with its age at a solid but unspectacular 42 hour power reserve with a 28,800 bph beat rate. 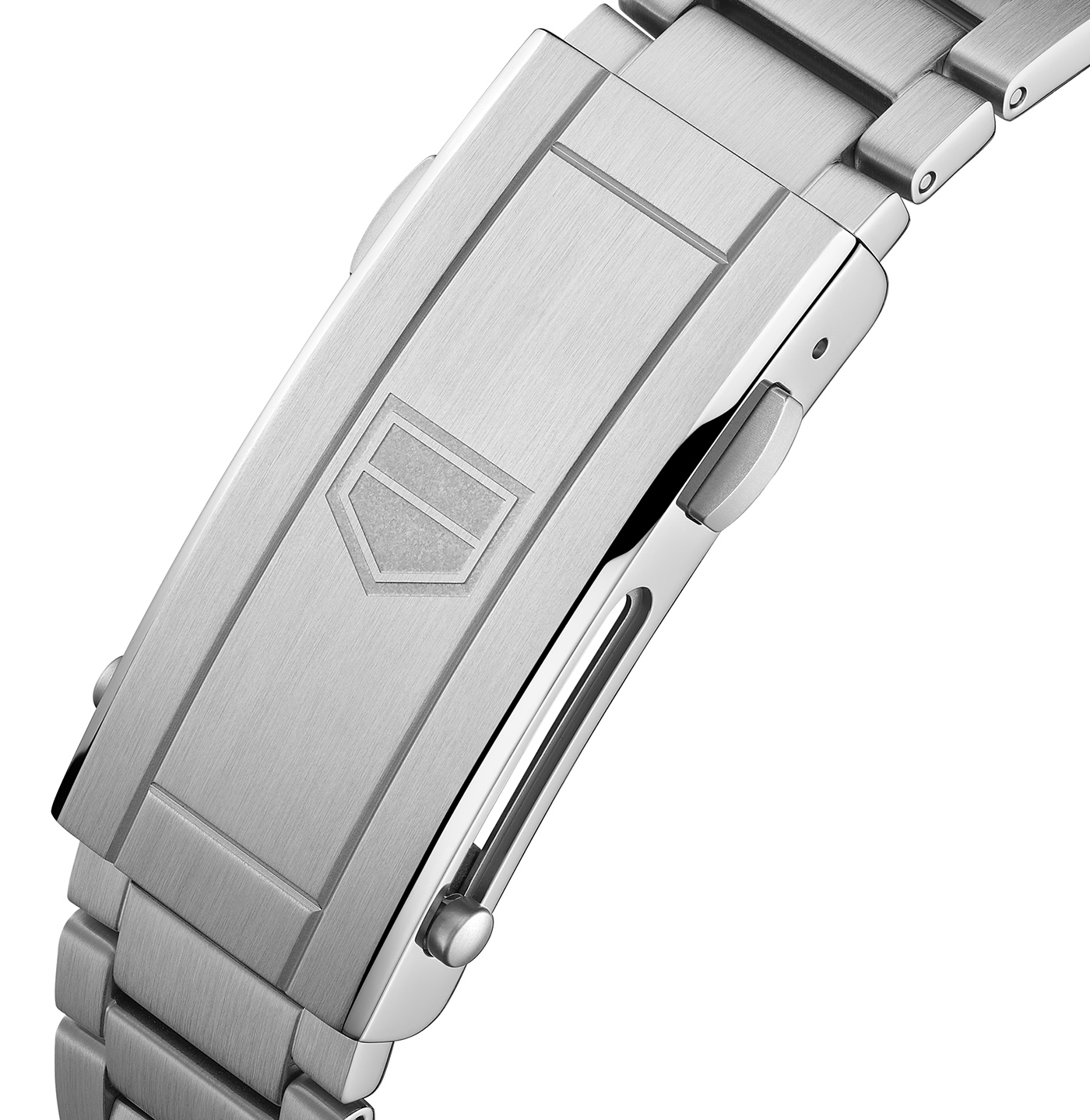 TAG Heuer offers the Aquaracer Professional 300 series with a refreshed variant of its three link oyster style bracelet. Compared to the previous version, this new model is more flowing and streamlined, with less emphasis on blocky angular elements and wider central links. The clasp has also been heavily reworked, with a new sliding micro-adjustment system. The core stainless steel models render this new bracelet in fully brushed stainless steel, while the green dial titanium variant naturally opts for a matching matte titanium version. For the Tribute to Ref. 844, TAG Heuer pairs the watch with a modern curved end take on a vintage big hole rubber tropic strap, cleverly integrating the look into the overall design with octagonal holes in place of the original round style. 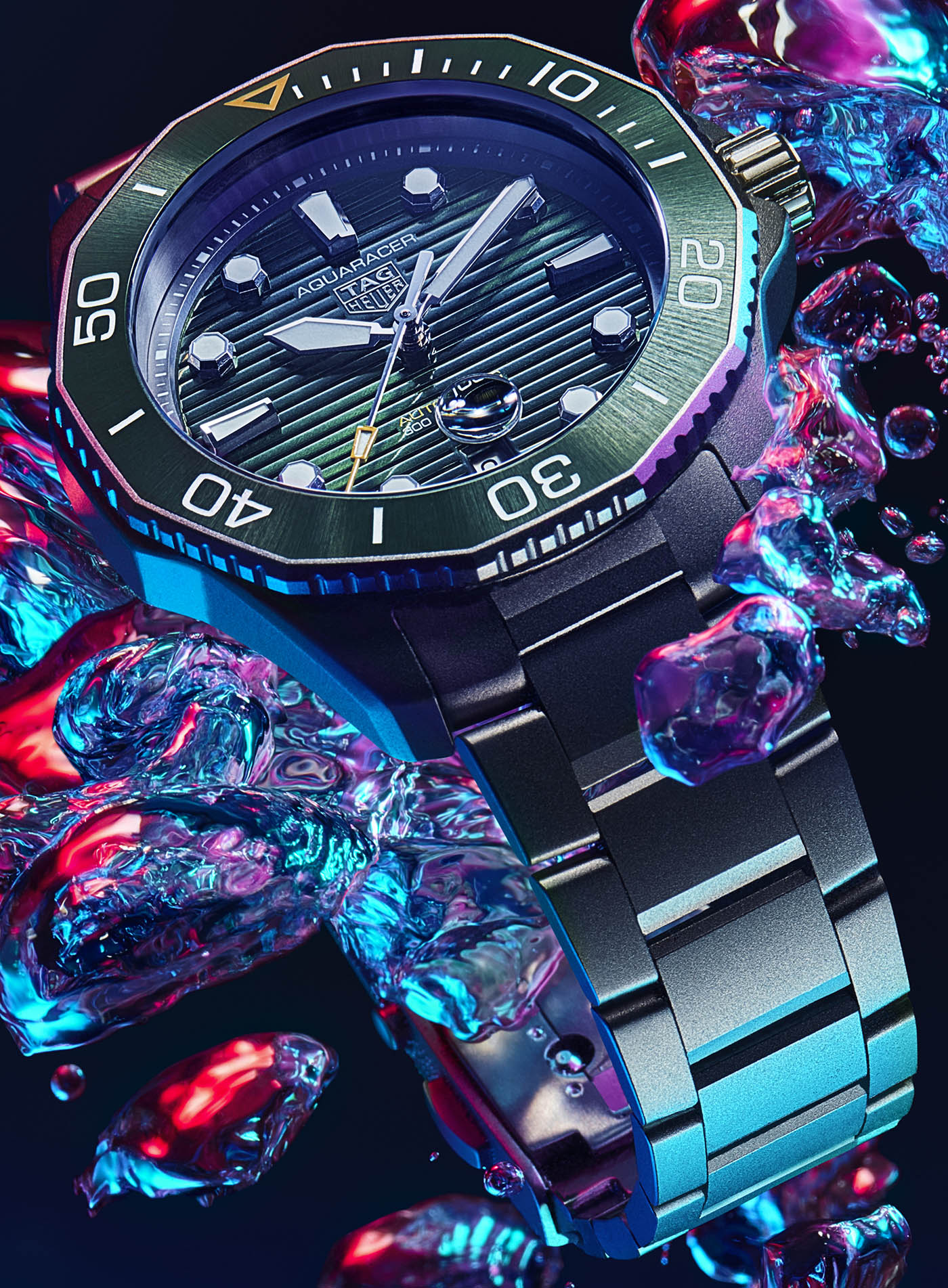