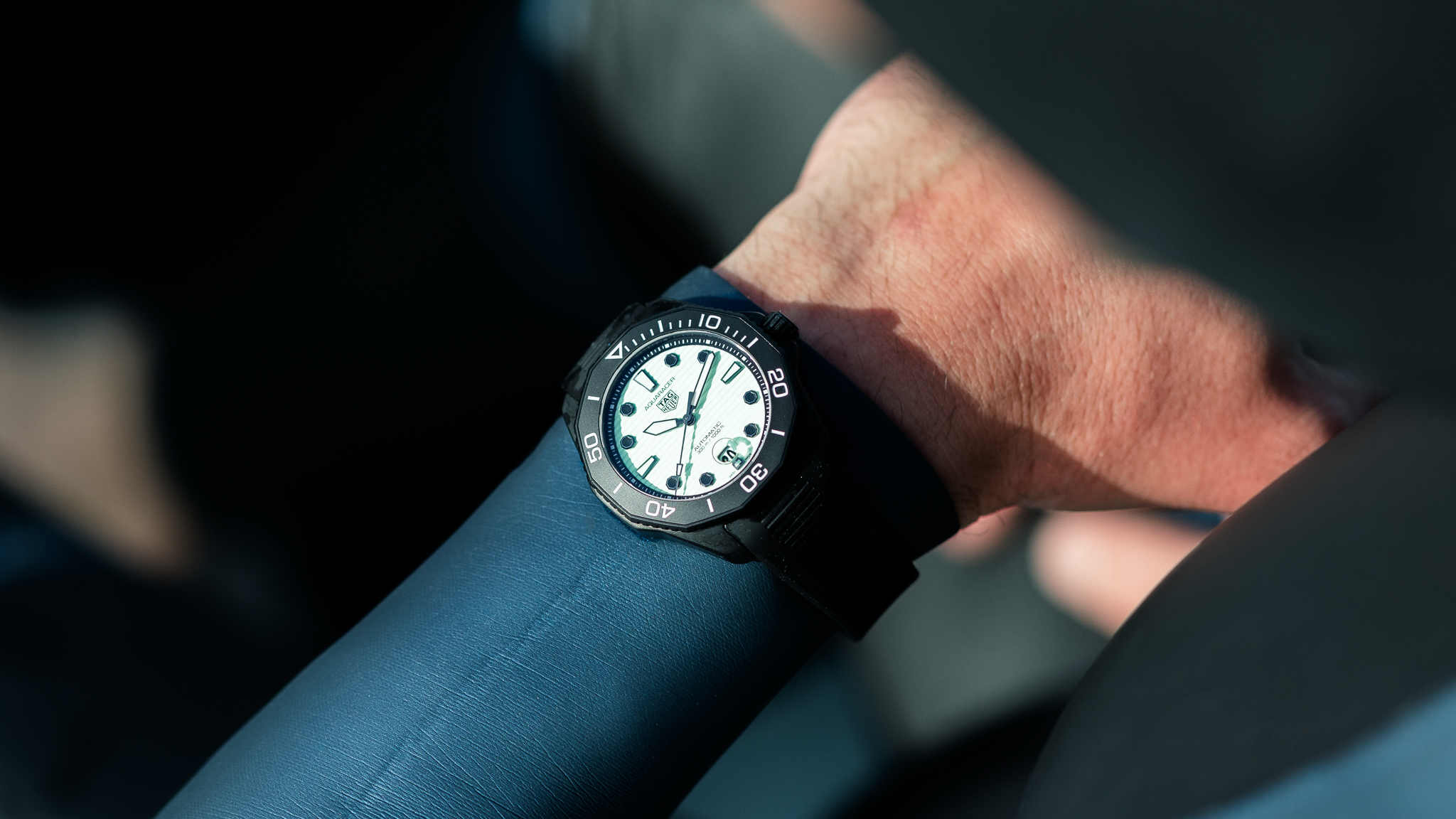 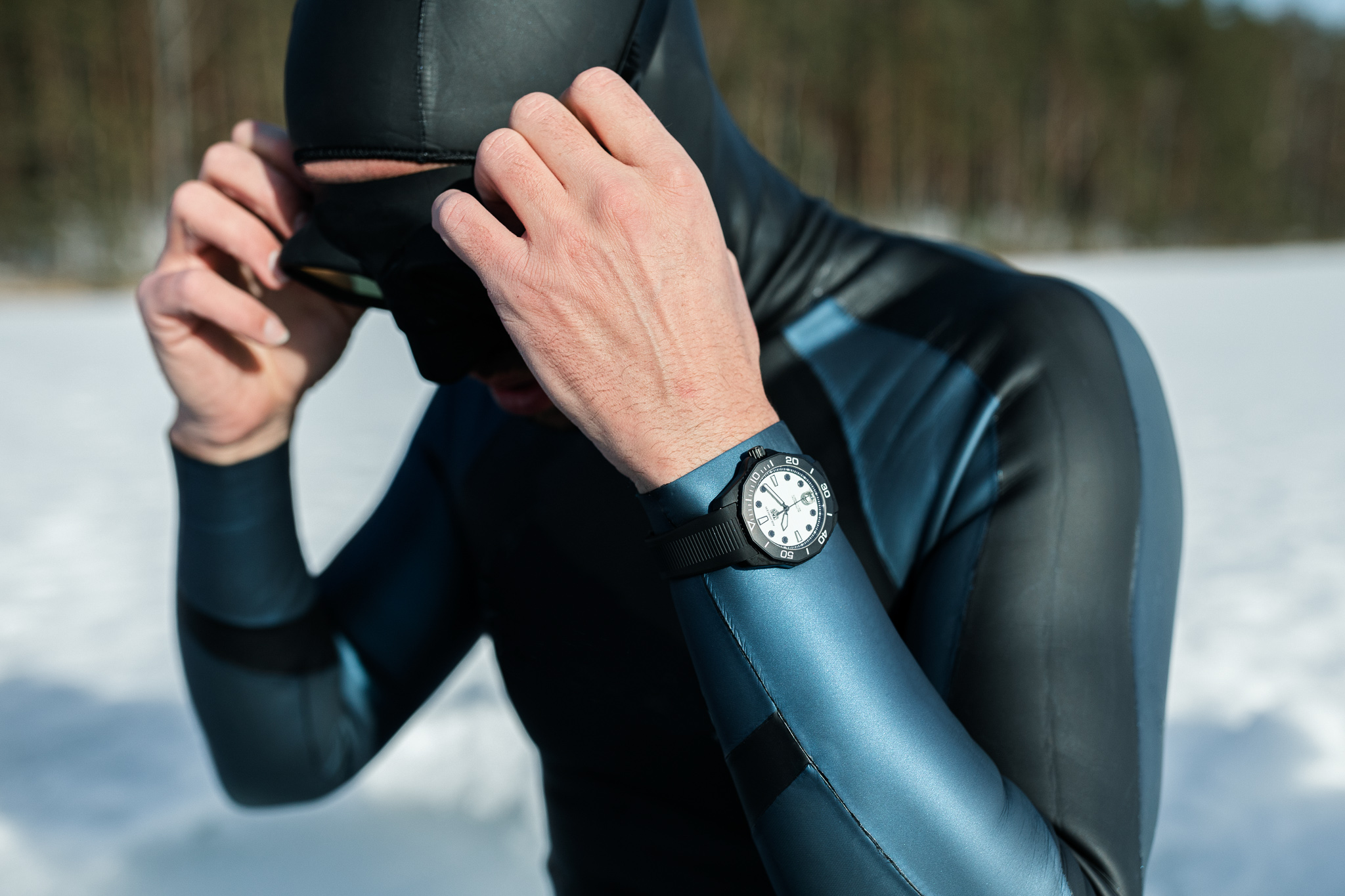 The 15th entry to the James Bond series The Living Daylights wasn’t exactly the most memorable installment for Ian Fleming’s now-legendary super-spy, but the 1987 film remains noteworthy as Timothy Dalton’s first go at the fictitious character following the retirement of Roger Moore from the role (after seven films spanning 12 years). For eagle-eyed watch fans, it was also noteworthy in that it marked the first time MI6 agent 007 wore a TAG Heuer watch onscreen. Yep, the modern Bond wasn’t always a Seamaster man — Dalton would wear what appears to be a PVD-coated “glow dial” TAG Heuer Professional 1000 (the folks at Calibre11 have settled on ref. 980.031 as the most likely possibility), then return to the Rolex Submariner for License to Kill before Pierce Brosnan strapped on an Omega Seamaster 300 in Goldeneye, and the rest, as they say, is film lore. 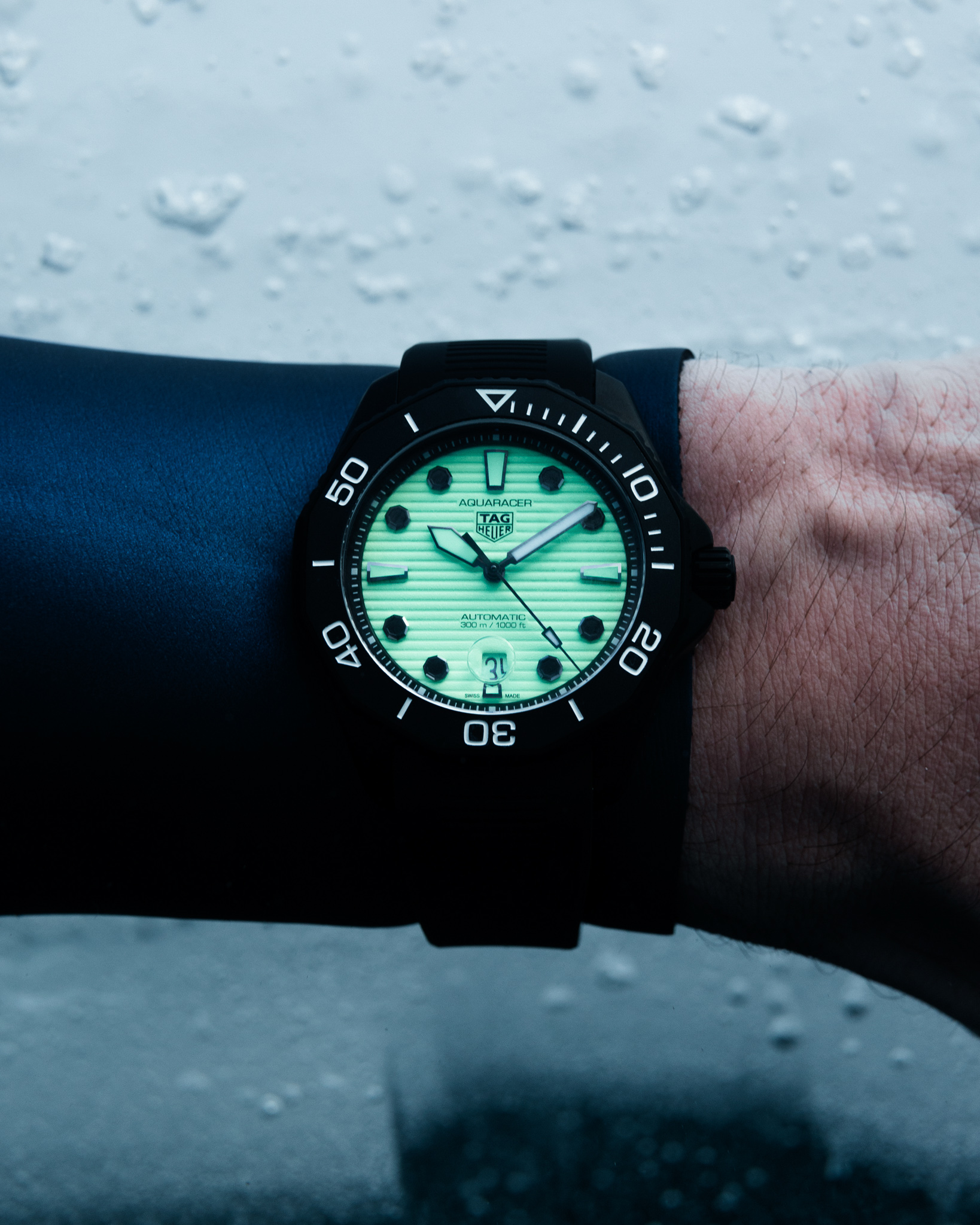 Fresh on the heels of the Aquaracer 300 reboot from earlier this year, TAG Heuer is already expanding the line with a brand new “Night Diver” — an ultra-modern, 43mm DLC-coated stainless steel version with a fully lumed dial and the brand’s newest Calibre 5 engine, for a combination that should simultaneously appeal to watch fans, with its automatic power plant, and fans of the Bond film universe. The end result carries the stark, tactical feel of the original Heuer Professional watches, but with all the refinement in case architecture and dial design that we’ve come to expect from a modern Swiss luxury name. Now, it is worth mentioning that TAG Heuer did already try to restart the Night Diver with 2018’s DLC-coated titanium ref. WAY108A, but perhaps due to this model’s quartz movement and more avant-garde design, it wasn’t ever really acknowledged as the spiritual successor to the original 007 screen-worn watch from 1987, even if Dalton’s watch might also have been a quartz-powered reference.

But thanks to the more classical design language of the recently refreshed Aquaracer line, this newest iteration certainly feels like it bridges the gap to the classic Heuer Professionals more closely, thanks to its stealthy case profile, sword handset, and round-ish hour markers, even if they’re actually octagonal at closer glance — a nod to the case’s angular flanks and 12-sided bezel (a dodecagon for those keeping score at home). Ultimately, it’s hardly a re-issue of the original “Glow Dial” watches, and the stark-white modern Super-LumiNova dial lacks that distinctive lime green day-glow, but it’s still the closest that TAG Heuer has come so far to Dalton’s Night Diver during his short tenure as 007. 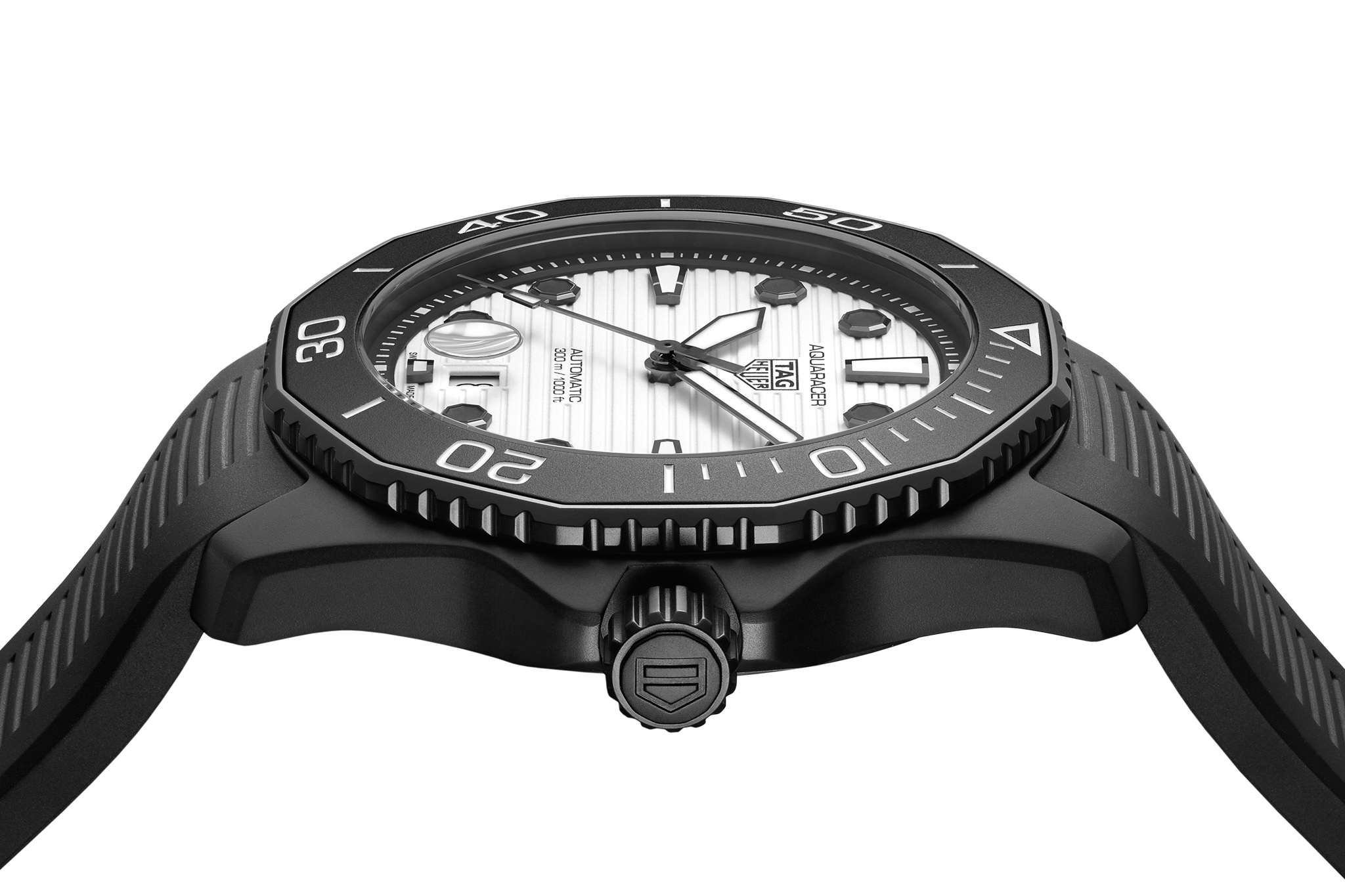 Quite frankly, I love this release. The new Aquaracer is already a marked improvement over its predecessor — from both a comfort and wearability perspective (the new ratcheting clasp on the rubber strap is a master stroke) to the stripped-down, less avant-garde aesthetics, there’s a lot to like here. TAG Heuer even figured out how to retain the Aquaracer’s signature “shutter” dial texture without compromising the surface’s luminosity — a particularly neat touch, when most fully lumed dials tend to have a single surface texture upon which all of the luminous paint is evenly applied. For the quirky subset of dive watches with fully lumed dials, there really aren’t too many modern options currently available for collectors to consider. There is, of course, the recent Bell & Ross BR03-92 “Full Lume” diver, as well as the Citizen Promaster “Fugu” NY0119 Full Lume, and then the lesser-known, but perhaps most faithful to the original, Heuer Professional design brief: the Squale 500m ref. 1521 “Lume.” 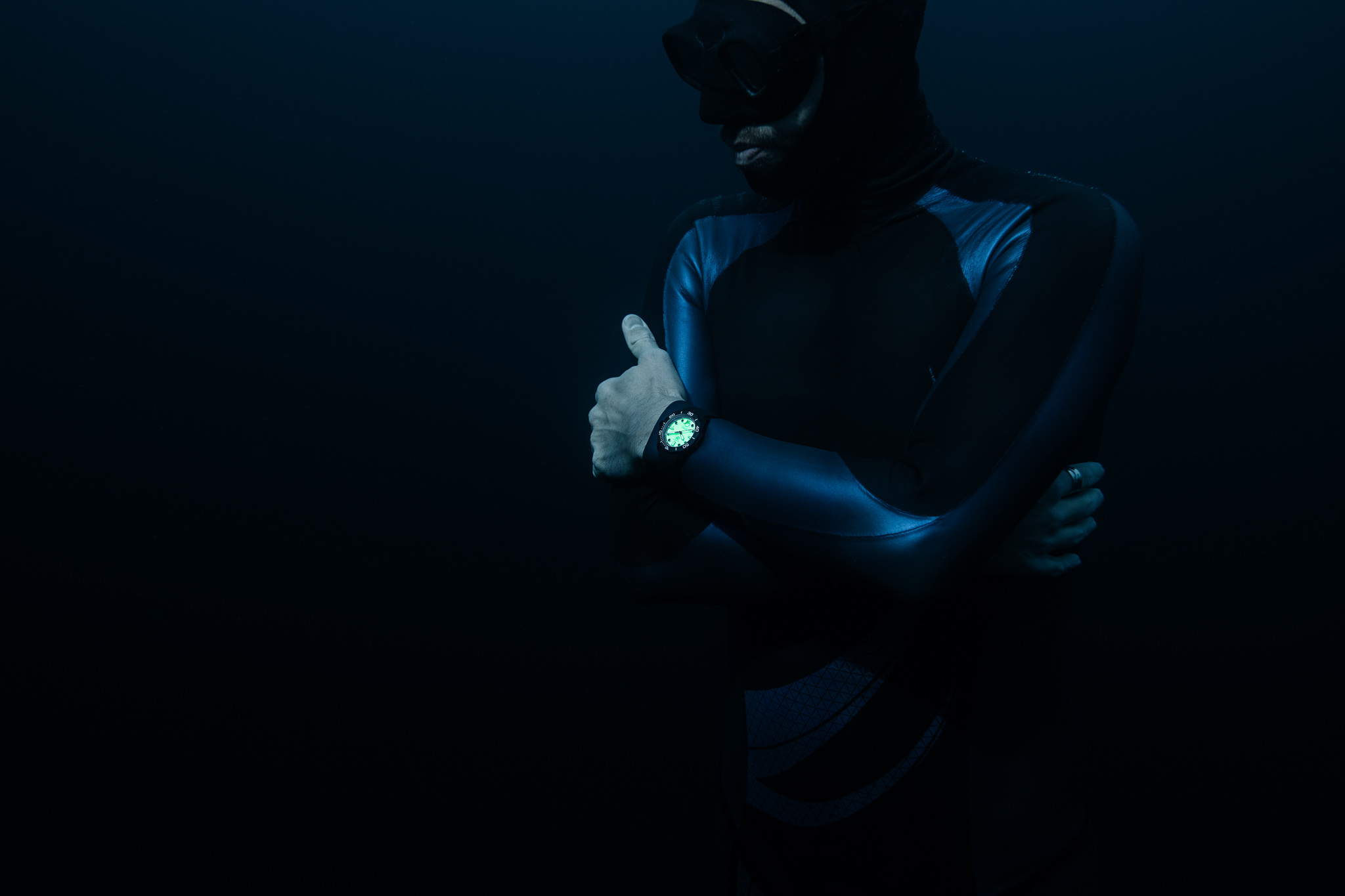 While the starting price for the standard stainless steel Aquaracer 300 is $2,800, the new DLC-coated Night Diver will command a slight premium with a price of $3,350 on its integrated rubber strap with the aforementioned ratcheting diver’s clasp. It’s expected to be available immediately at TAG Heuer stockists — though, in the meantime, you can always learn more about the Aquaracer collection at tagheuer.com.