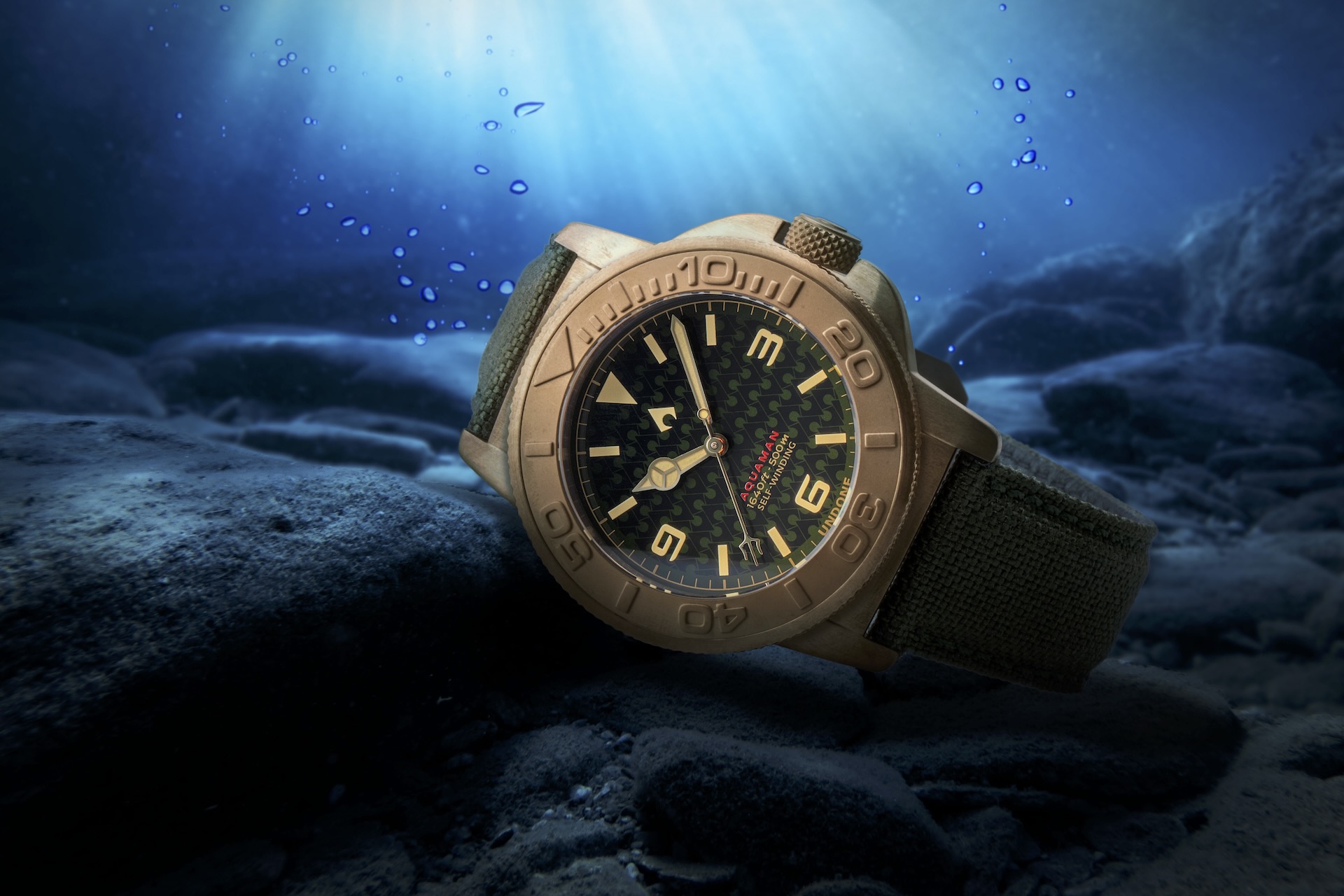 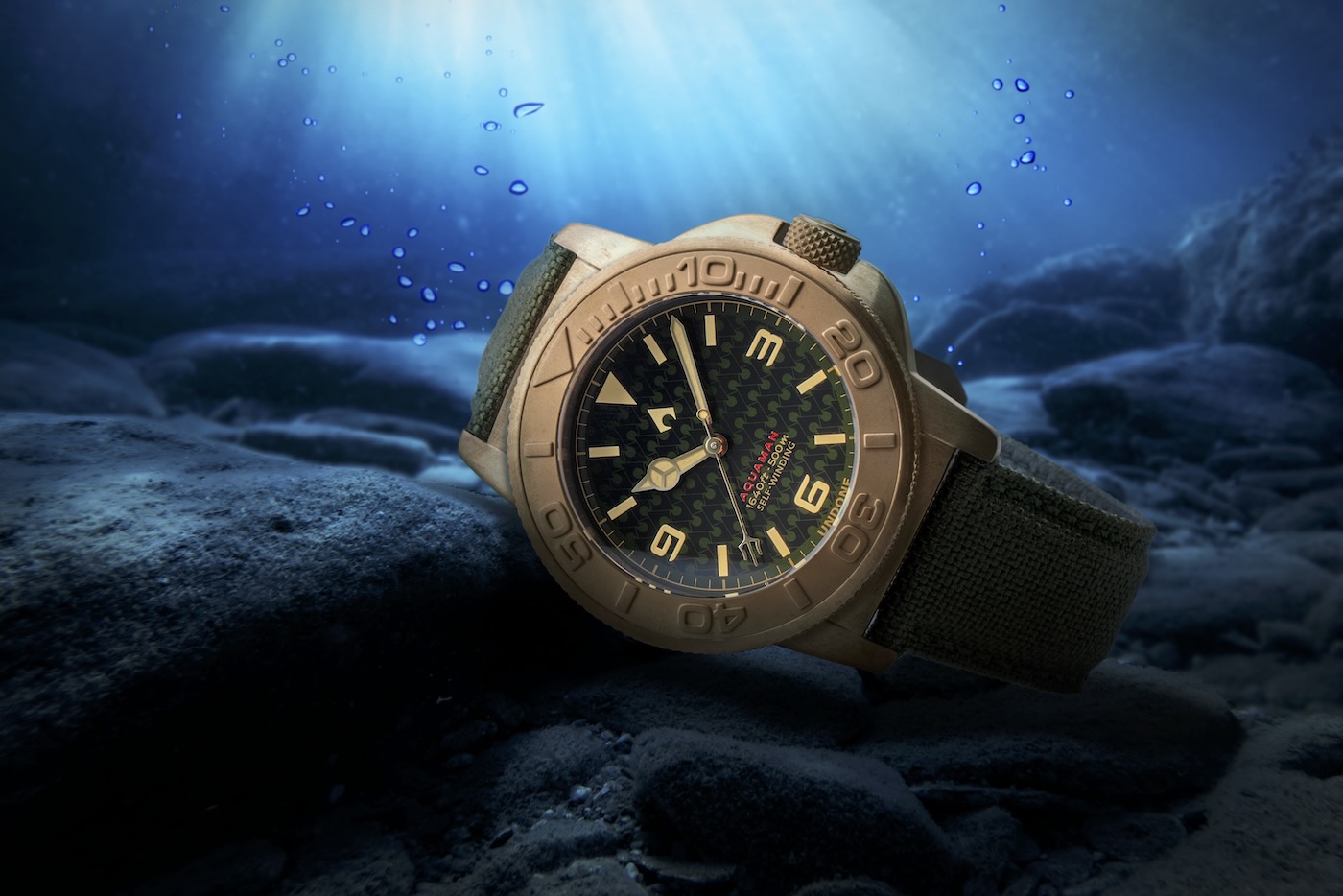 Among DC Comics’ vast pantheon of unforgettable heroes, one stands alone as the King of Atlantis and Protector of the Deep: Aquaman. First introduced in More Fun Comics in 1941, Aquaman was a founding member of the Justice League and has been a mainstay in the DC Comics universe since Paul Norris and Mort Weisinger first put pen to paper. Though Aquaman has evolved and changed over the decades, the half-human, half-Atlantean hero, with his ability to communicate with marine animals and extraordinary underwater strength and speed, has always held a soft spot in the hearts of those with a love of the oceans. In their latest release, UNDONE pays tribute Aquaman in the most appropriate way possible, by creating an overbuilt bronze-cased dive watch inspired by Aquaman’s legacy in the DC Comics universe. 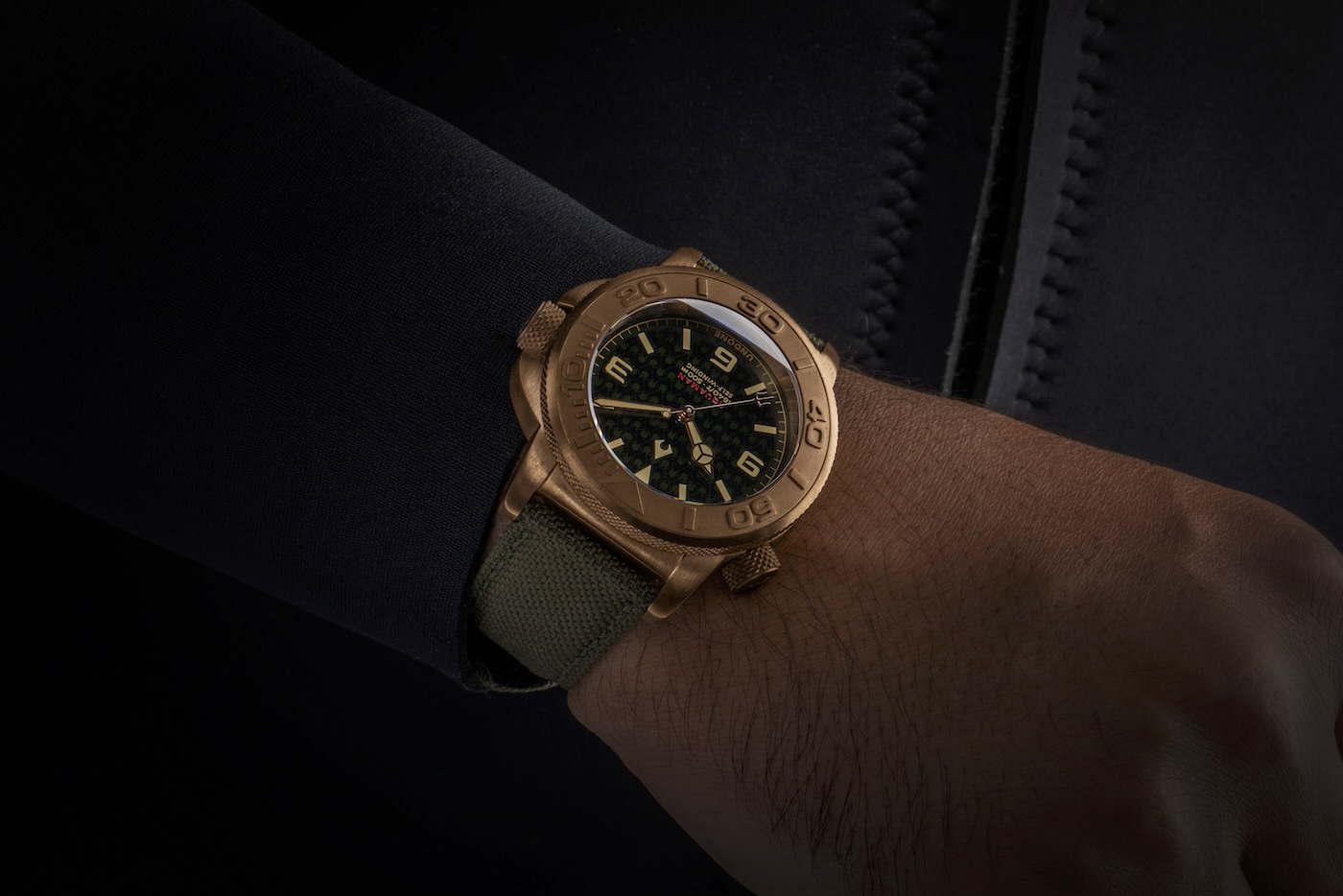 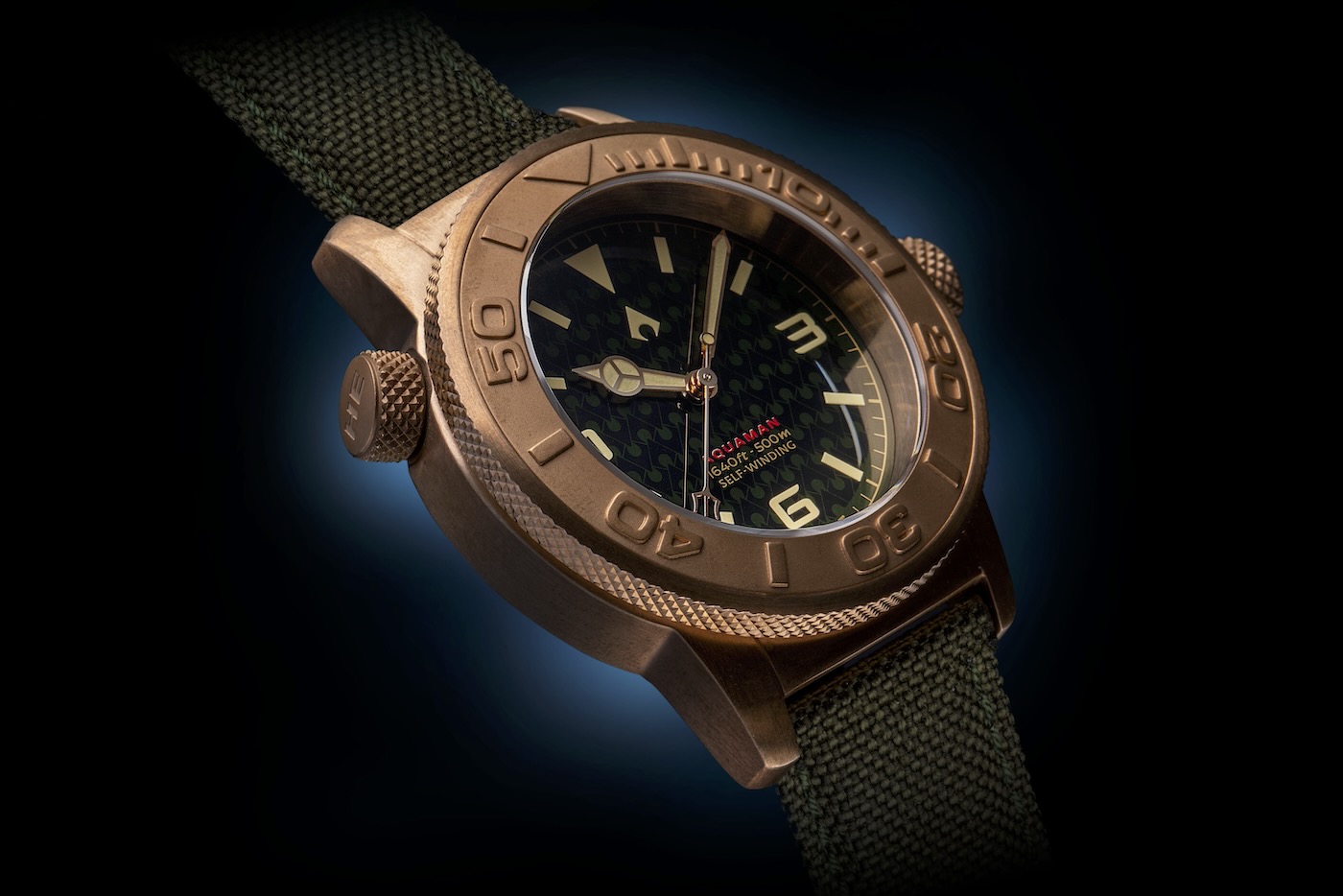 UNDONE built its brand on personalization. With several base models as the starting point, UNDONE allows customers to change everything, from the case to the dial to the handset, allowing you to create a watch that is uniquely your own. In creating the Aquaman, UNDONE applied that concept to one of DC Comics’ most beloved characters, asking the question: “What watch would Aquaman design?” 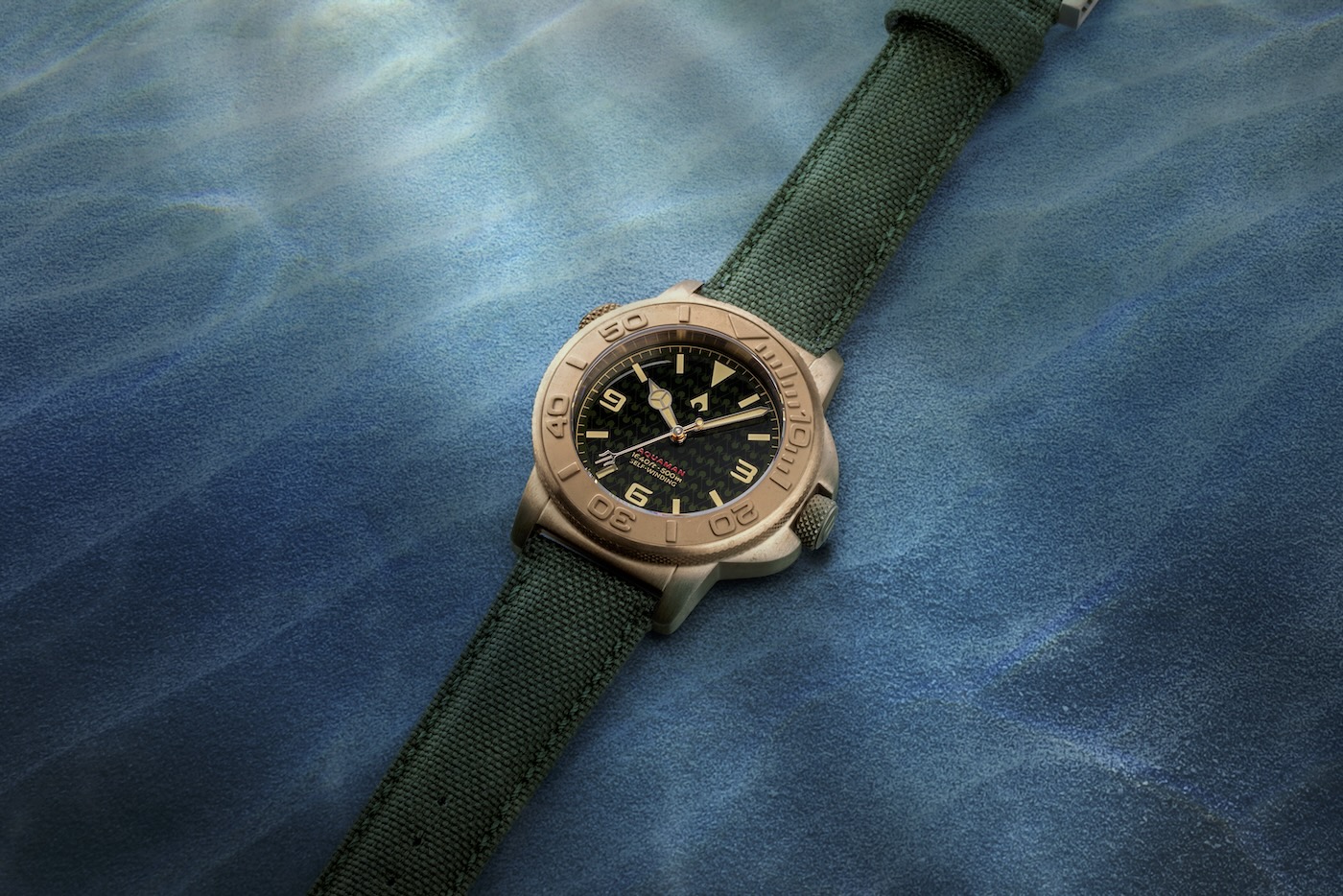 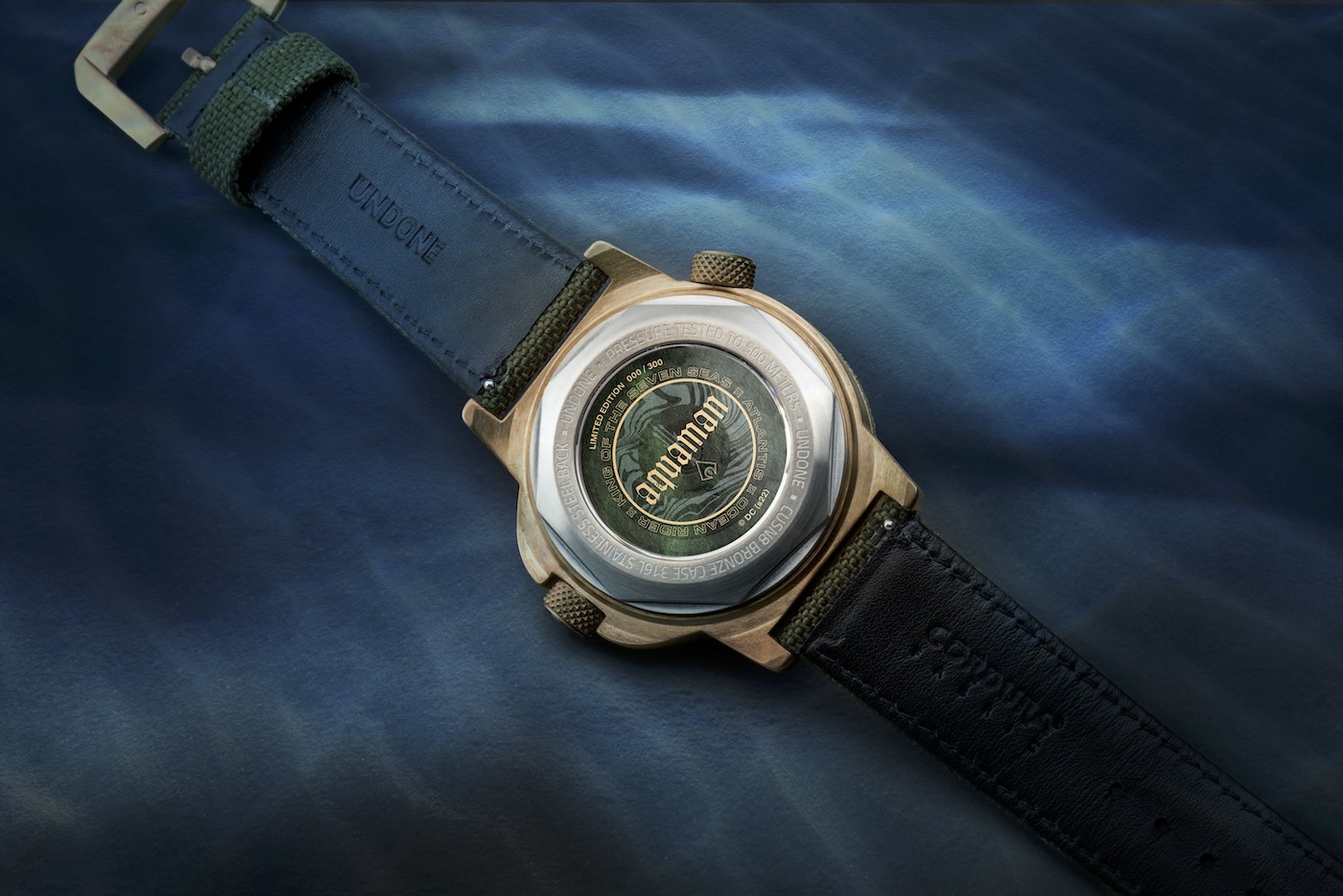 First step: case material. Given that Aquaman first debuted in 1941, it only makes sense to choose a material that harkens back to the early days of underwater exploration and is intimately linked to maritime history. Crafted from CuSn8 bronze, this alloy is highly resistant to corrosion, but over time a thin layer of oxidation will form on the surface, the case developing a patina completely unique to the wearer. However, if you prefer the watch in its pristine state, a bit of lemon juice and baking soda will get the watch back to looking factory fresh. On the other hand, if you want your UNDONE Aquaman looking like an artifact Arthur Curry might find while swimming through a centuries-old shipwreck, you can always accelerate the oxidation process to create a heavy brown and green patina. Of all the case materials, bronze is the one you truly make your own. 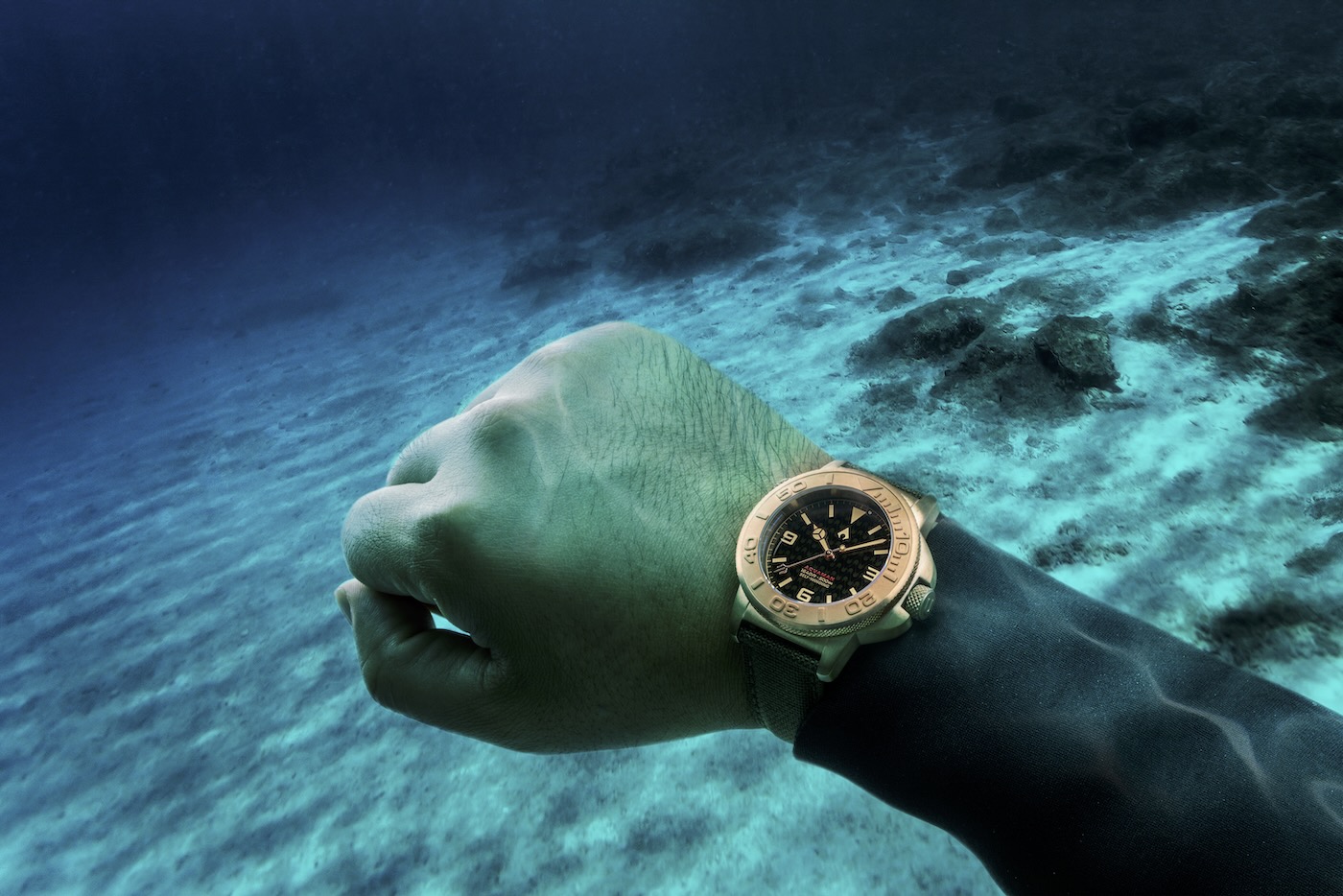 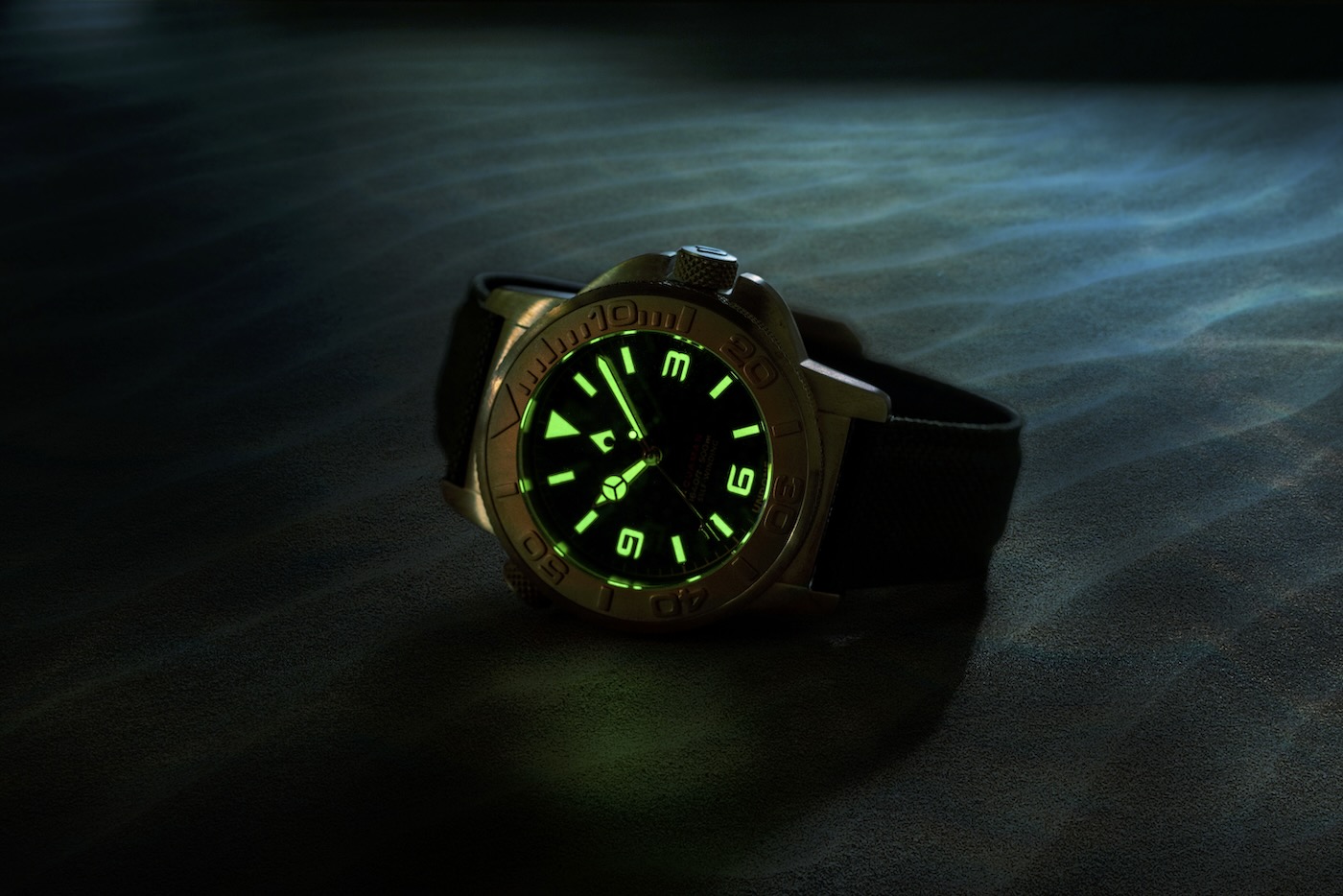 Given that this is a watch designed with Aquaman in mind, it clearly needs high water resistance. Though Arthur Curry may be the King of Atlantis, able to reach unthinkable depths, that doesn’t mean any watch would be up to the task. UNDONE designed the 43mm diameter Aquaman with 500m of water resistance and a 3mm thick double dome sapphire crystal and a helium escape valve at 10 o’clock. In keeping things simple and aesthetically unified, the unidirectional dive bezel is crafted from bronze with embossed markers and numerals. 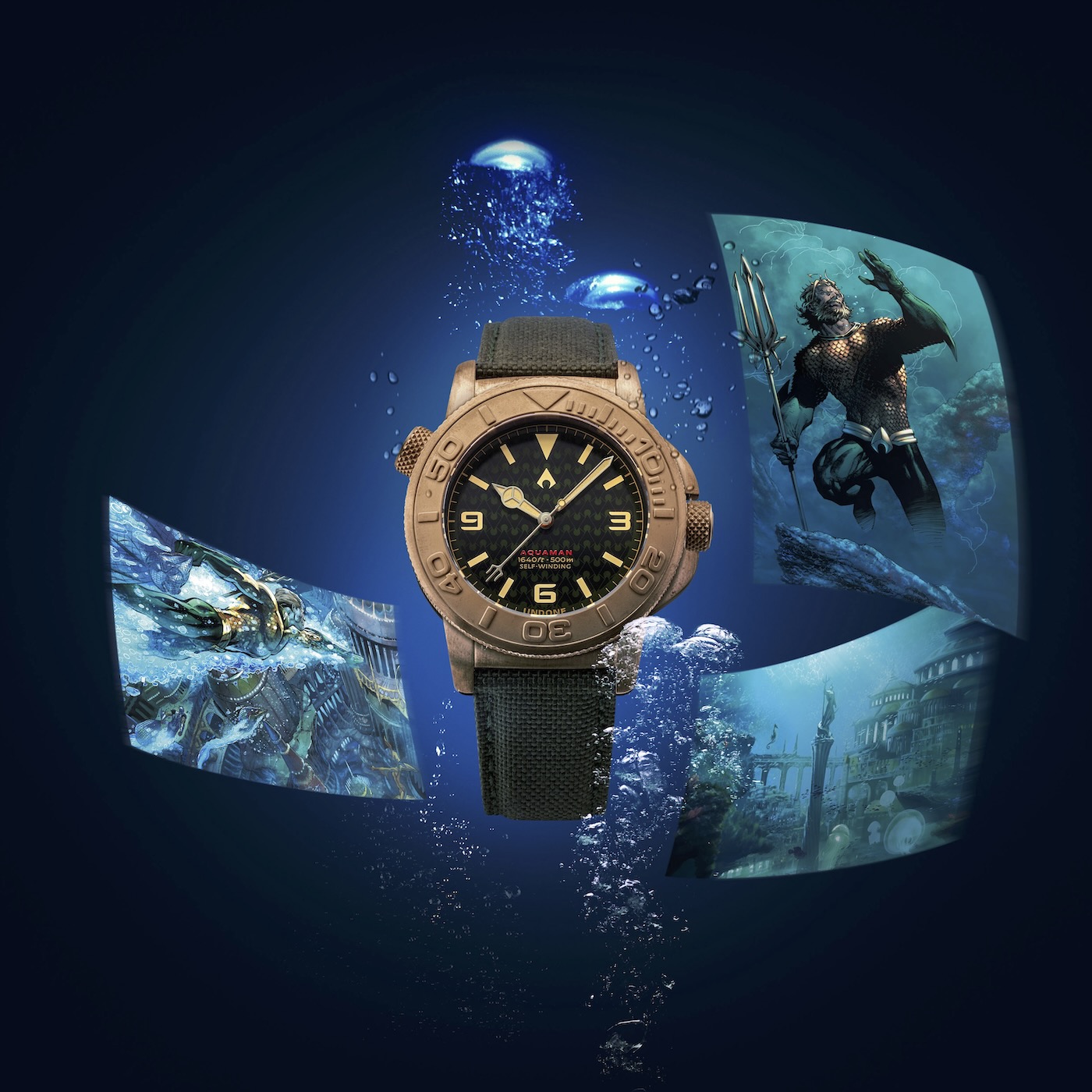 In personalizing Aquaman’s watch, the next step was to consider the dial. The green and black repeating motif of Aquaman’s logo is a personal touch and is executed in such a way as to reflect scales of Aquaman’s suit. When combined with the warm tones of the markers and hands, the dial is a perfect complement to the bronze case. This is a watch built for being deep underwater, so legibility is key; as such, UNDONE opted for a simple 3-6-9 dial layout with oversized, luminous baton indices. Continuing along the theme of legibility, the Aquaman utilizes an oversized handset, but doesn’t forget about the small touches that personalize the watch. The tip of the seconds hand is finished with Aquaman’s trident — a symbol of Aquaman’s power and rule. 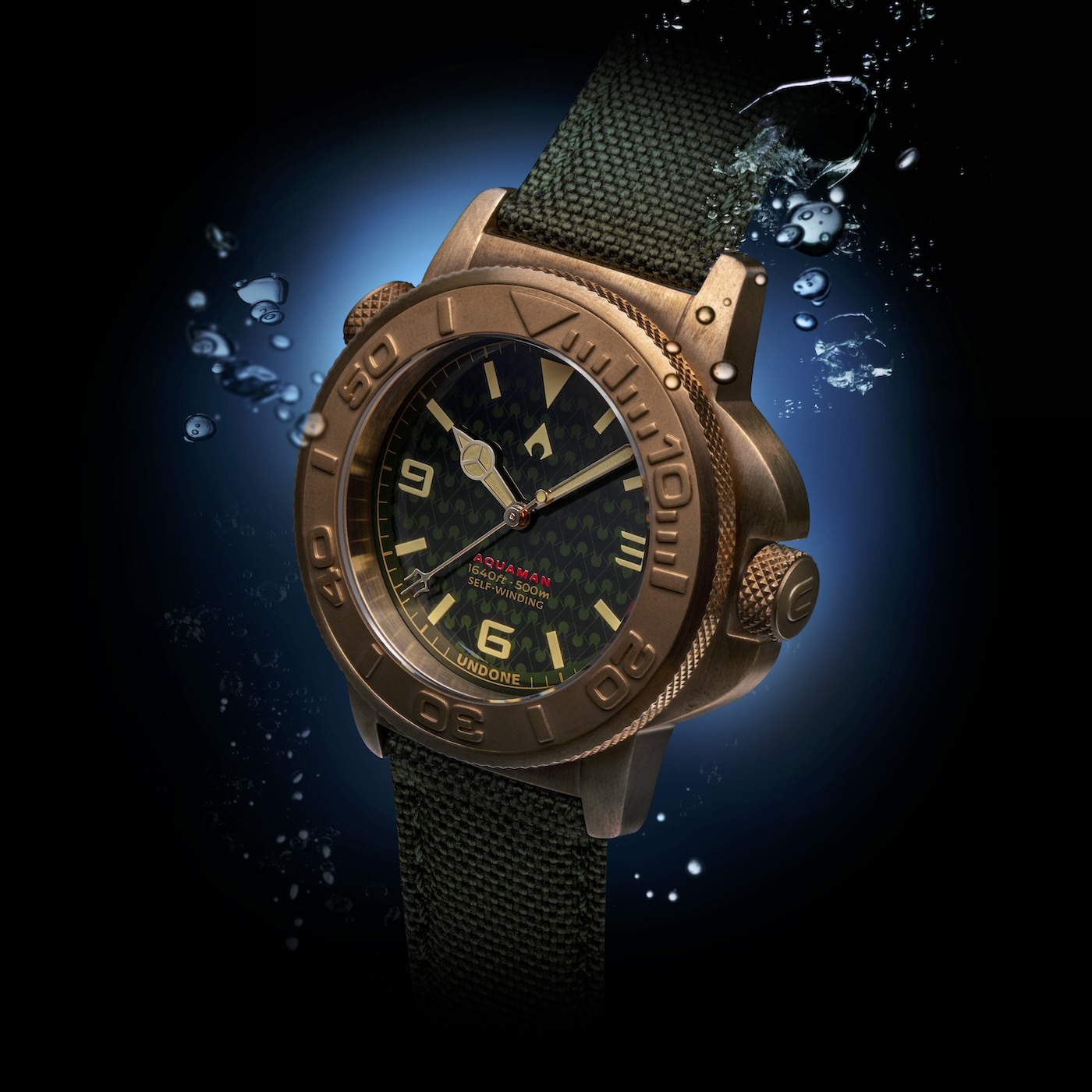 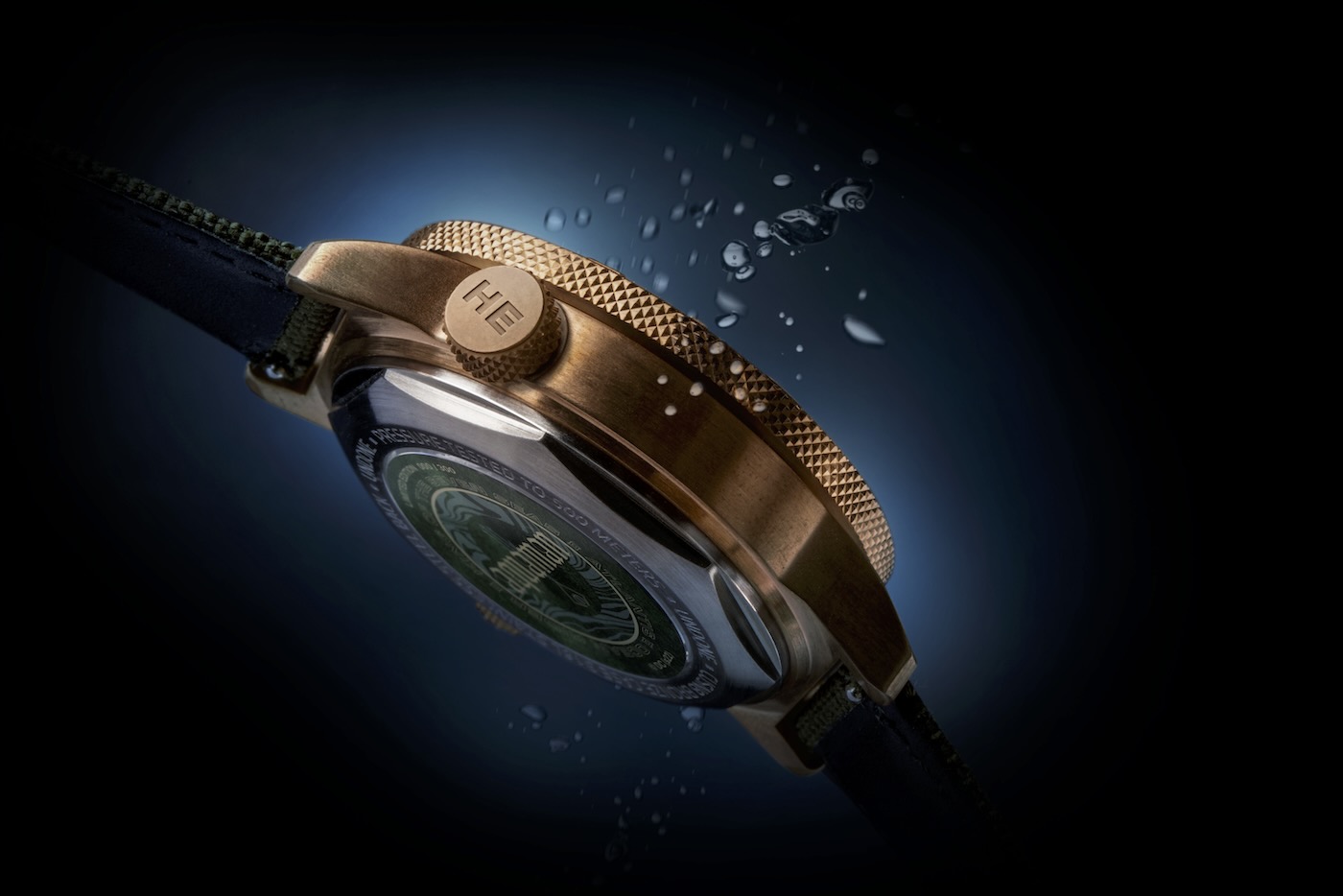 Reliability is clearly of chief concern in a watch designed for Aquaman, so UNDONE opted for the Japanese TMI NH35A Automatic movement. Produced by Seiko, the NH35 movement is a 24-jewel movement that beats at 21.6kbph and houses a 41-hour power resolve along with hacking seconds. The NH35A is a no-nonsense movement with a well-earned reputation for durability and reliability. 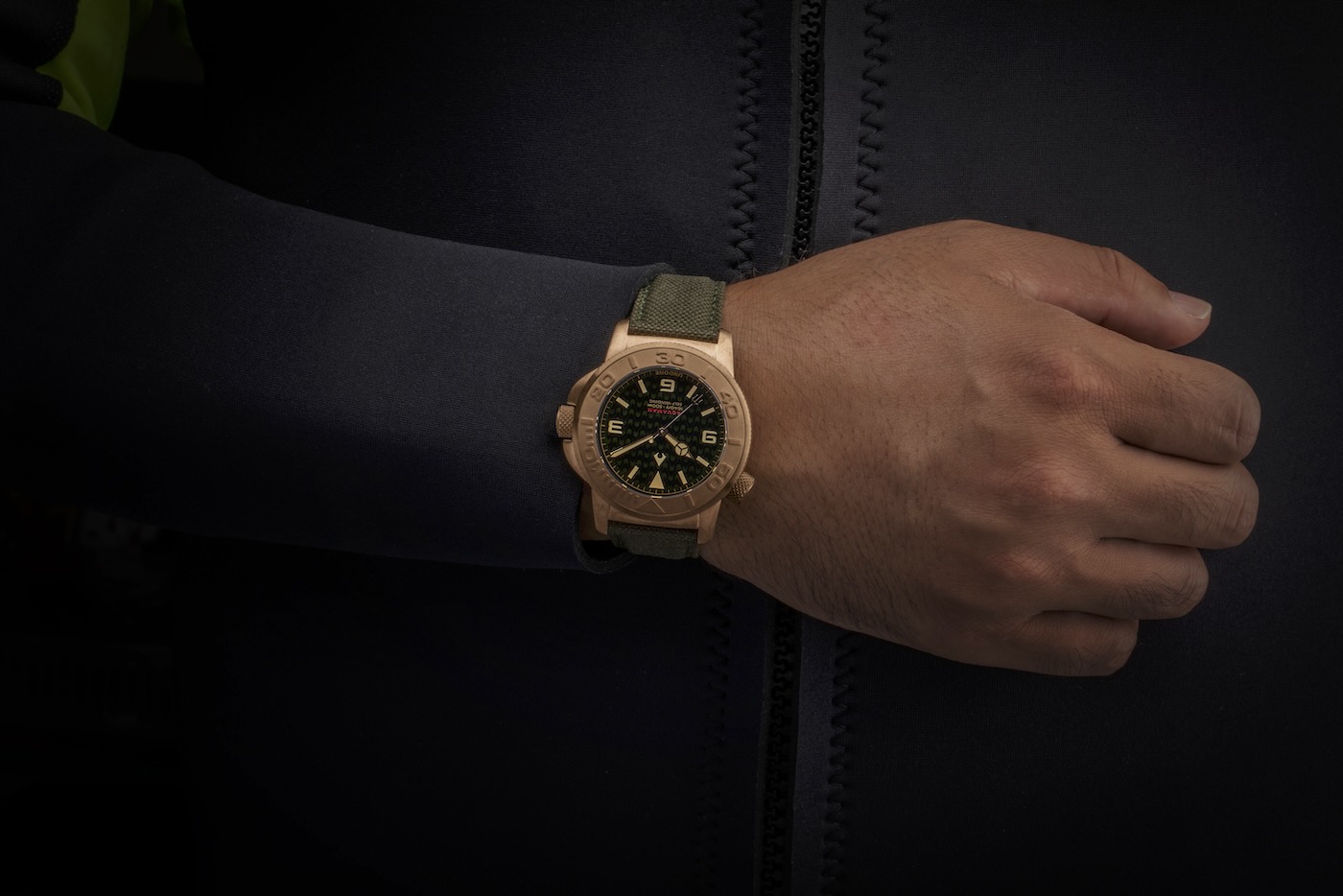 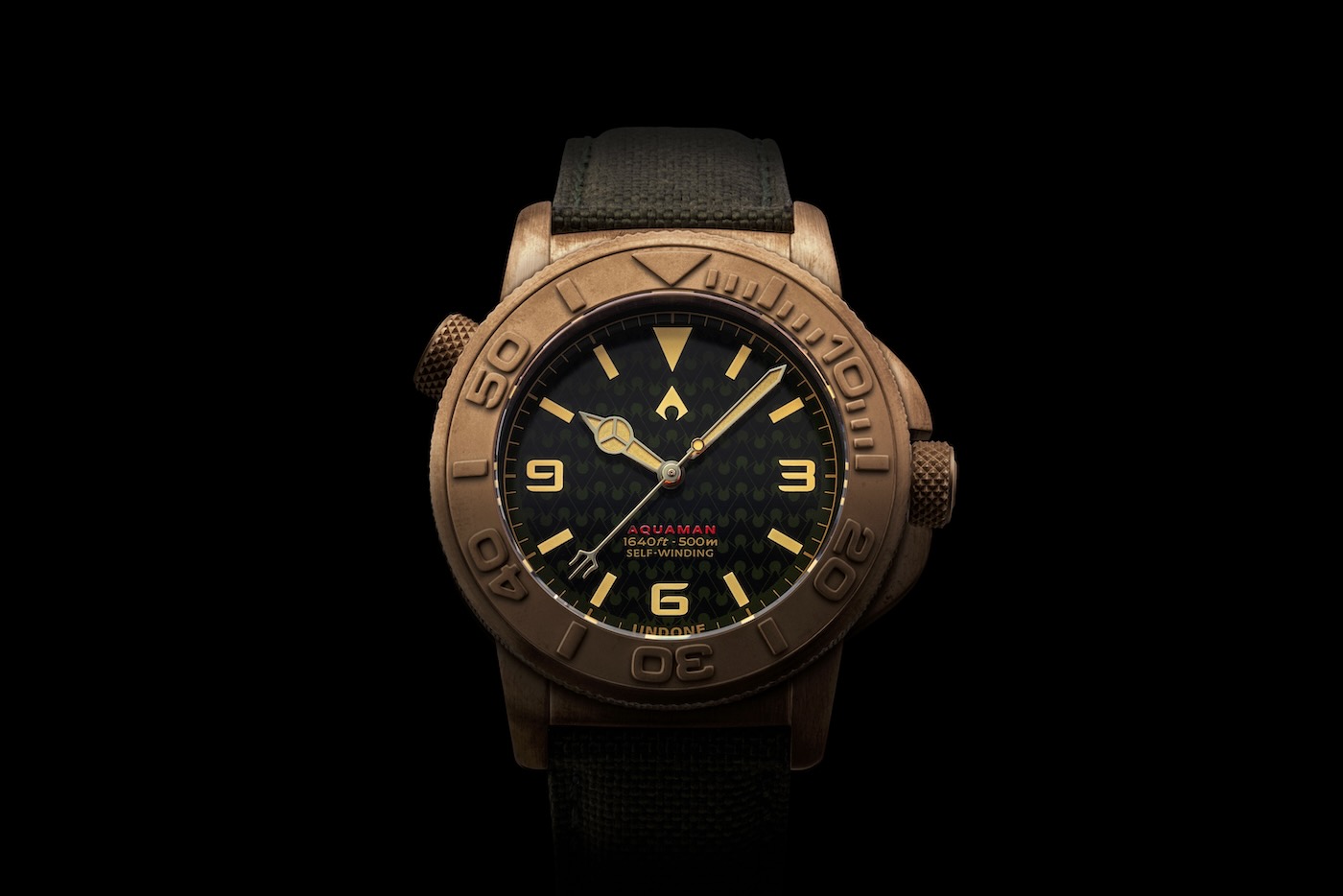 The UNDONE Aquaman is priced at $699 USD but aBlogtoWatch readers can receive 10% off with coupon code abtw-aqua. The Aquaman is limited to just 300 pieces worldwide, with each watch printed with its individual number in the series. To order your Aquaman and learn more about UNDONE watches, be sure to visit the brand’s website.