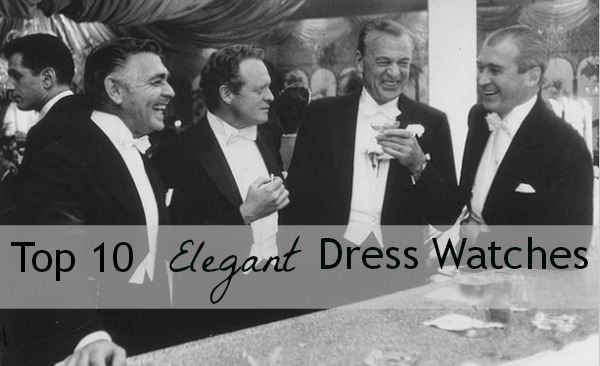 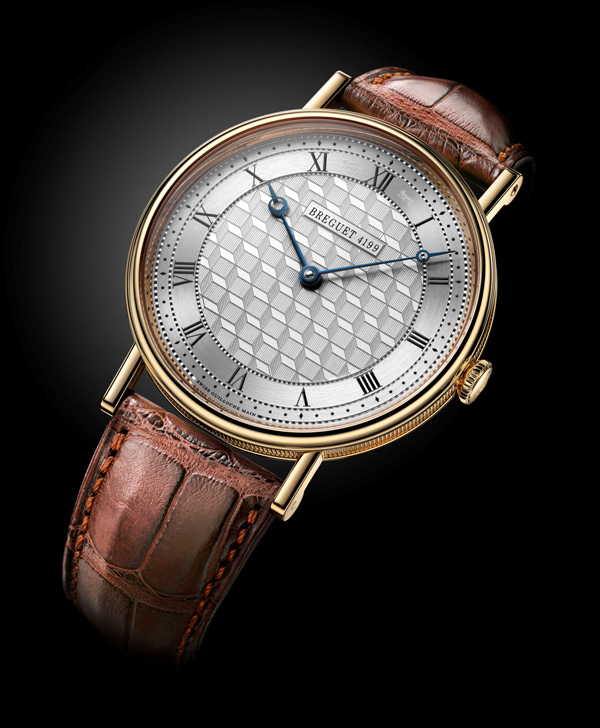 Breguet, one  of the most prestigious watch manufacturers operating today, has a rich history filled with important technical innovations most famously, the tourbillon, and clients included the royal court of King Louis XVI.

The Classique 5967 is for those with a taste for a slightly more decorative style of dress watch. With a manual winding mechanical movement that indicates only the hours and minutes, it features many of the hallmarks that distinguish a Breguet watch; around the case you have the classic coin edge (fluting) finishing; then you have the hand soldered lugs; and finally the guilloche dial is topped off with the iconic blued steel Breguet hands.

The Classique is slightly more ostentatious due its intricately decorated dial, the art of engraving dials being one of the brand’s signature features, unchanged since its founding over 230 years ago. The checkerboard or “Art deco Damier” design, which has a nice three dimensional effect, adds an interesting texture and richness to the dial and contrasts the simplicity of the overall design.

With a 41-millimeter-diameter case in yellow or white gold, the Breguet Classique is a slightly more ornate dress watch that is the distilled essence of the watchmaker and expresses an obvious classicism according to their own DNA. It retails for about $18,000. breguet.com 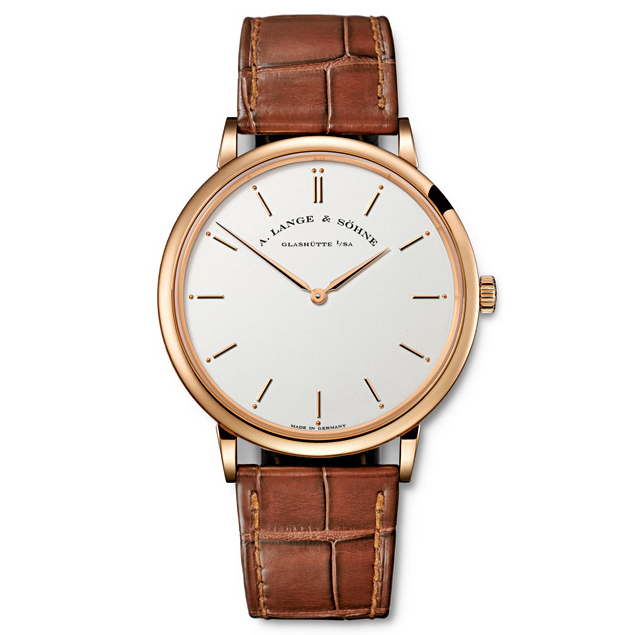 Measuring just 5.9 mm in height, the Saxonia Thin is the thinnest A. Lange & Söhne ever. Second to none in terms of craftsmanship, A. Lange & Söhne’s are regarded as one of the best high-end watch manufacturers, they are probably better known for their more complicated watches so an extra thin movement is slightly out of the ordinary for this prestigious German brand. The Calibre L093.1 in the the Saxonia Thin was developed specially for this model and is a mere 2.9 millimeters thick, but despite its diminutive stature, it still manages to provide an impressive 72-hour power reserve.

The dial of the Saxonia Thin is nicely balanced and features nothing more than thin baton hour markers with a small dot next to them and lancet hands. At 40mm, it’s contemporary sized and combined with an understated discreet look, you have discrete luxury and classic elegance in a case that measures only 5.9mm thick. The movement is viewable through the sapphire case back. And, being an A. Lange & Söhne, it has a superb level of finish worthy of attention.

This refined, handsome dress watch has been distilled to the essence of timekeeping for people who enjoy low-key designs, it is presented in an 18-carat casing of either pink or white gold and costs $23,000. alange-soehne.com 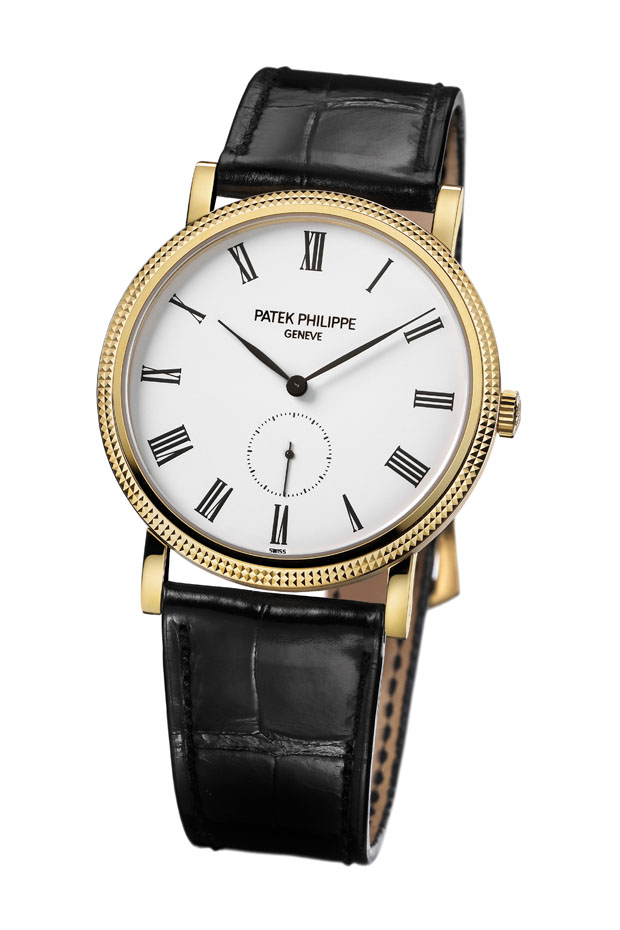 A small round elegant watch with a fine mechanical movement, the Calatrava is considered the flagship line of models by Patek Philippe, a line first introduced back in 1932. You could say the Calatrava line is emblematic of the brand since they made the Calatrava Cross their brand emblem. Not only that, but it is the line that became most enduring for Patek Phillipe. This particular model, the 5119 and its ancestor the 3919, is considered by many to be one of the quintessential dress watches.

The original 3919 Calatrava model with its iconic and instantly recognizable “Clous de Paris” guilloché (hobnail-pattern) bezel was introduced in 1985 and was updated in 2006 with the Ref. 5119 Calatrava by increasing the bezel’s diameter from 33.45mm to 36mm, a change in size that reflects the growing trend for larger watches.

With black Roman numerals on white lacquered dial, the dial is perfectly balanced. The hour and minute hands are leaf-shaped and a subdial at 6 o’clock features a discreet baton-style seconds hand. Inside, the calibre 215 PS manually-wound movement provides about 44 hours power reserve housed inside a case with an ultra-thin silhouette of just 7 millimeters with satin-finished sides and mirror-polished lugs.

Available in white, pink and yellow gold, the white gold with black alligator strap is perhaps the most iconic version. A dress watch that captures the timeless character of the brand and will hold its value well, costing $23,000. patek.com 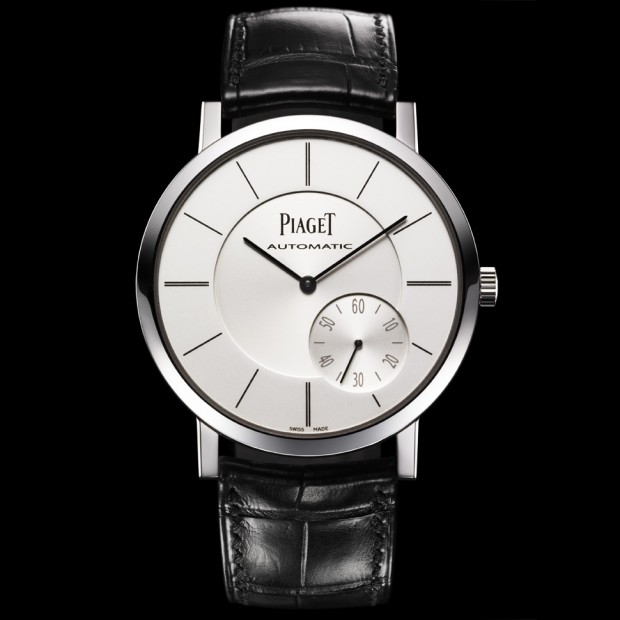 In 1874, Piaget started out making high-precision movements in a small workshop in La Côte-aux-Fées, a small Swiss village and went on to become a brand with an ultra-thin ideology

Ultra-thin movements were to become one of the company’s “signatures” especially after the launch in 1957 of the Calibre 9P. The world’s thinnest mechanical hand-wound movement at 2mm thick and the Caliber 12P in 1960, the world’s thinnest automatic movement measuring just 2.3mm thick. After the success of showing these record breaking watch movements at Baselworld, Piaget went on to become the choice of movie stars and the international jet-set of the 1960s, 70s, and 80s.

In 2010, to celebrate the 12P’s 50th anniversary, they launched the Altiplano with calibre 1200P , the worlds thinnest automatic movement at 2.35mm at time of launch. At 43 millimeters wide, it’s a fairly substantial but a very slender wrist presence giving it a highly versatile contemporary look that can be worn as an everyday dress watch and also suit those formal occasions too. The watch case is available in 18k white or rose gold and retail is about $20,000. piaget.com 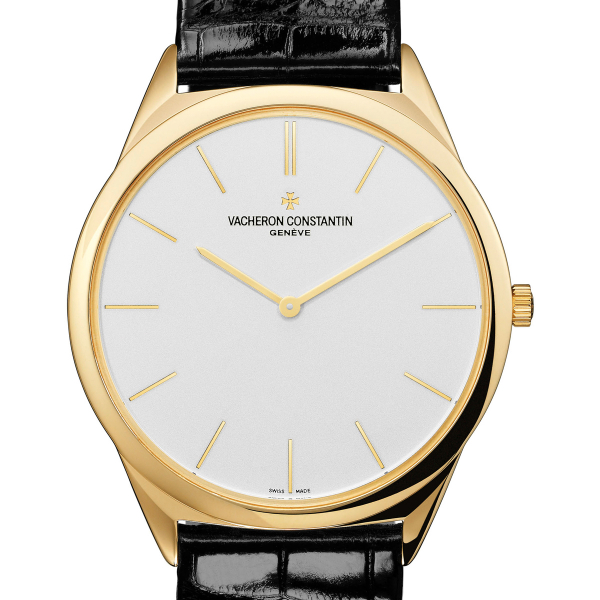 Vacheron Constantin are one of Switzerland’s greatest masters of ultra thin watchmaking. As far back as 1911, they produced three calibers each measuring just 2.82mm thick and in 1931, set a world record for a mechanical pocket watch movement measuring just 0.94mm.

Celebrating this heritage, the Historiques Ultra fine collection consists of two dress watch models, one in a round case, the 1955, and a square case model, the 1968. As implied by their names, they are re-interpretations of watches from Vacheron Constantin’s past. In the 1950s and 1960s, Vacheron Constantin produced the world’s thinnest wristwatches, and with the launch of the Historiques Ultra Thin 1955 and 1968 at the SIHH in 2010, they proudly paid homage with these tribute models in manual and self-winding ultra-thin movements.

Increasing the diameter of the original 4961 model from 32 to a more contemporary 36mm, the updated 1955 model is also slimmer. The in-house manual wind movement is according to Vacheron Constantin, currently the world’s thinnest mechanical hand-wound watch, at just 4.10 mm thick.  The 1955 and 1968 Ultra Fine models are neo-classical dress watches with a reference to the brand’s rich history of innovation, but not just technically impressive, they also feature meticulous movement decoration and an exceptional degree of finishing which earned them the prestigious Hallmark of Geneva. Awarded only when a movement meets 12 technical and style criteria.  Retails for $26,000. vacheron-constantin.com 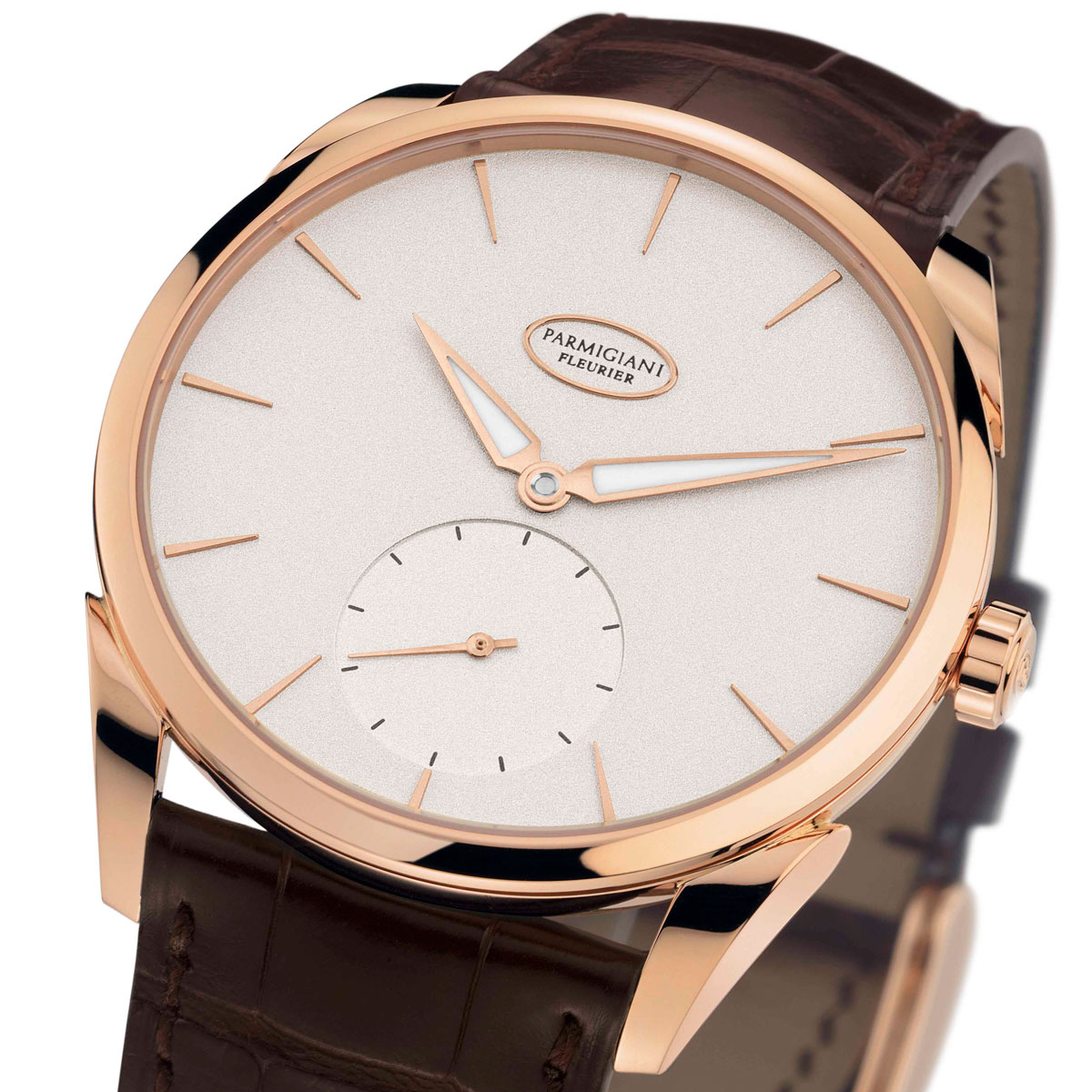 The Tonda is a tribute to Parmigiani founder Michel Parmigiani and its concept is back to the basic codes that are essential to the Parmigiani brand – an aesthetic purity defined by just the key markers of time: hours; minutes; and seconds.

Another important concept is that of flatness. The Tonda measures just 7.8mm thick thanks to the development of Parmigiani’s 13th in-house caliber, an ultra-thin automatic movement with a micro-rotor and measuring just 2.6mm in height. The movement features a solid platinum rotor and is viewable through its sapphire case back.

Measuring 39mm, the Tonda is a fine example of the dress watch genre, and one of the few high-end dress watches with lumed hands. Retailing for about $20,000. parmigiani.ch