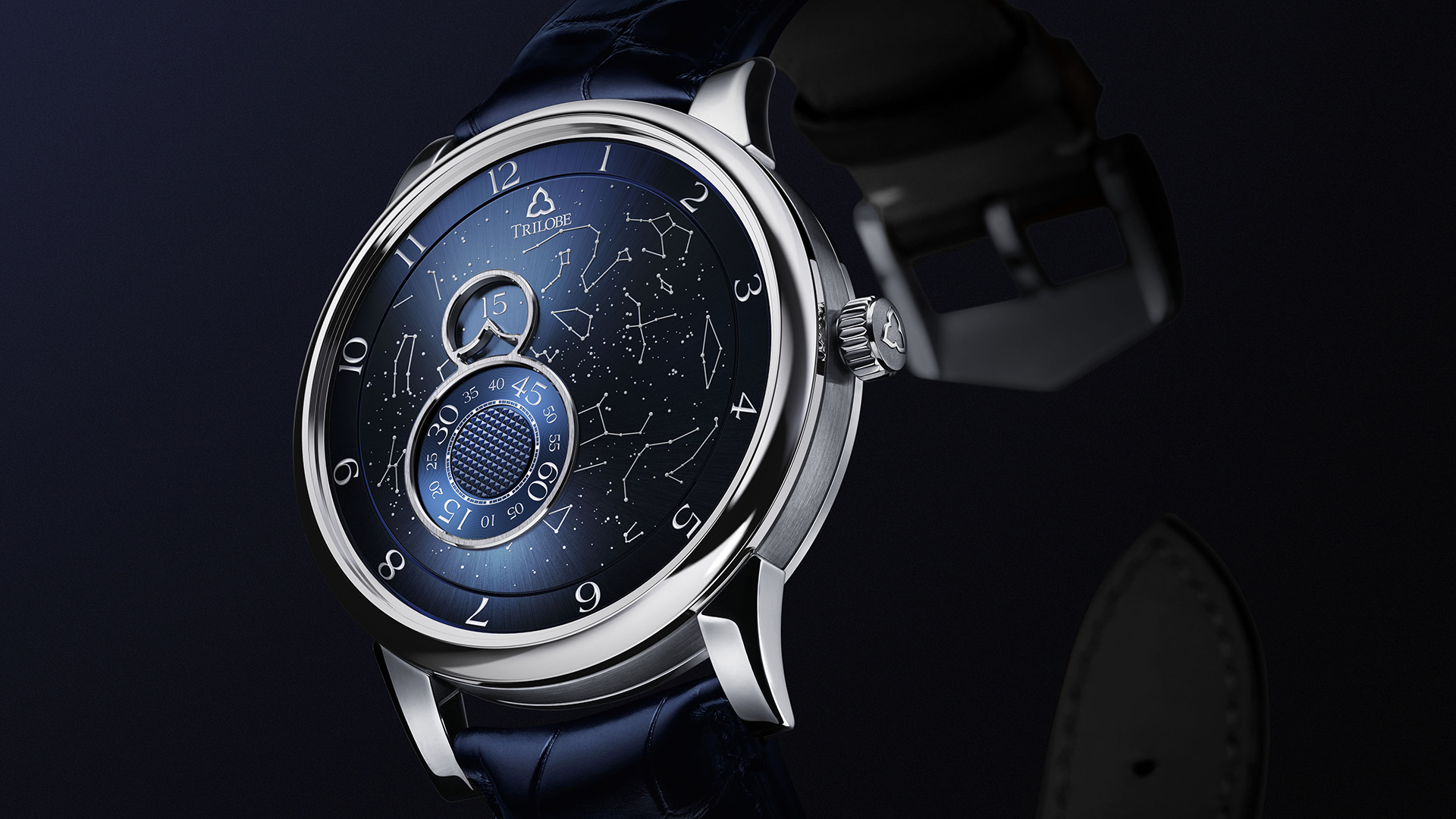 Symmetry, proportion, and negative space are three of the most powerful tools in a watch designer’s arsenal. By manipulating these core tenets of design, a nearly infinite variety of watches can be created, especially if an adventurous creator is willing to bend or break the established rules. The design team at Trilobe is one such adventurous group, and for its latest creation the brand has created an elegant, dressy new series that subverts expectations in a variety of ways. The new Trilobe Nuit Fantastique series offers a truly distinctive new perspective on asymmetrical watch design, bringing together dramatic dial finishing with a specialized movement and a unique series of counterclockwise display rings. 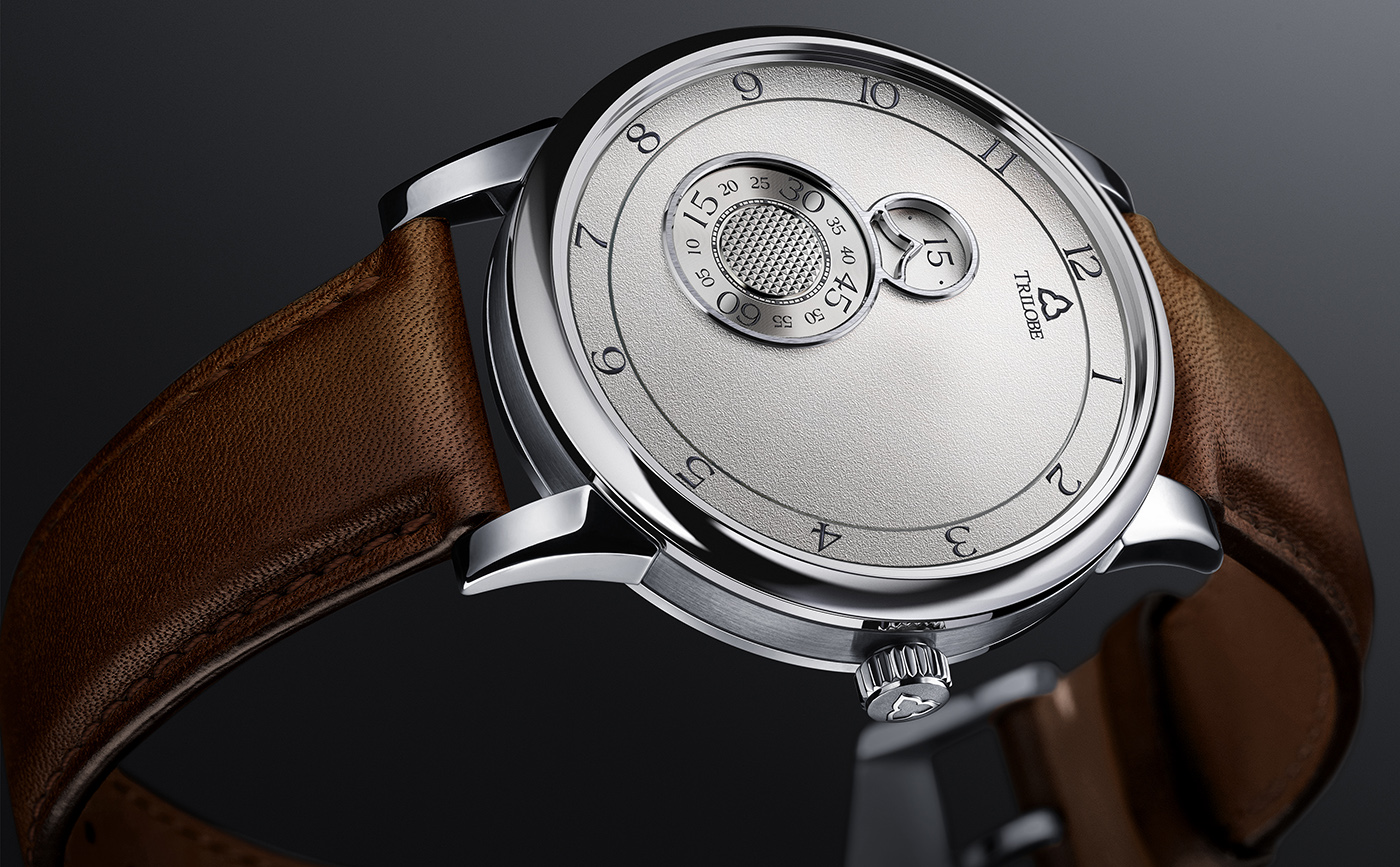 While the case design of the Trilobe Nuit Fantastique line is simple and traditional compared to the dial options, this clean and elemental look still features several touches that set it apart. The seven part construction of the 40.5mm stainless steel case allows the brand to create clear, abrupt distinctions between finishes, for example the coarsely brushed central caseband forming a separate part from the brightly polished bezel above it. Likewise, the visual break between the attached lugs and the main case adds a feeling of visual depth without feeling overly complex in initial images. Trilobe finishes the case with an extremely wide sapphire display caseback, showcasing as much of the movement within as possible. 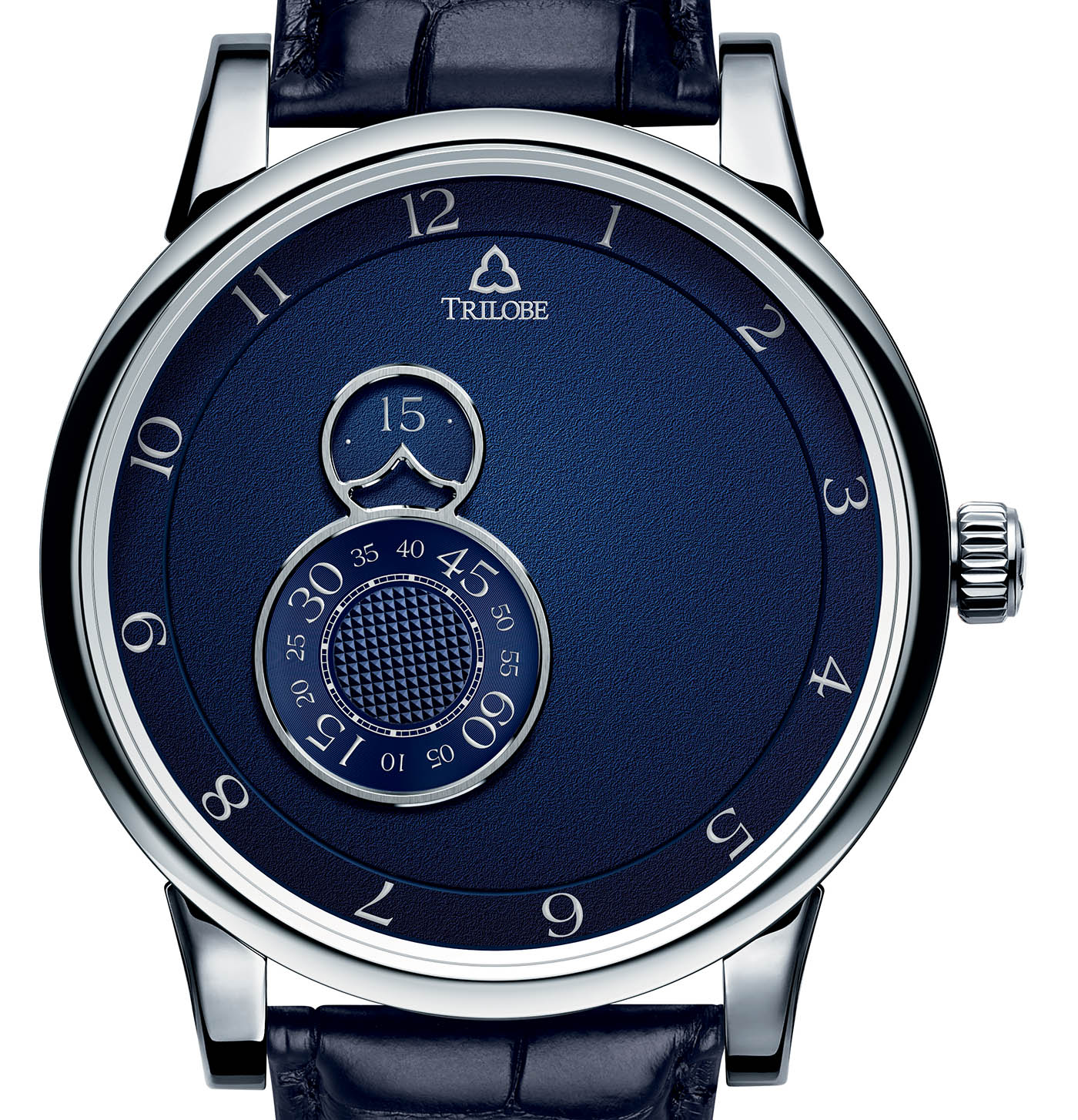 Trilobe takes a deconstructivist approach to the dial design of the Nuit Fantastique series. The core design divorces itself from the traditional concept of hands in favor of a series of progressively smaller rings in an asymmetrical yet balanced layout. The outer printed Arabic hours track rotates around the static center of the dial, with the point of the Trilobe emblem at 12 o’clock forming an indicator for easy reading. The seconds subdial is nested inside this static main dial surface at 8 o’clock, separated from the central dial by a brushed and polished chamfered internal bezel. This rotating displays the current seconds at its top as the entire assembly spins, allowing the clous de Paris guilloché segment at its center to dynamically catch the light at any angle. The seconds ring itself, with its elegantly slim serif numerals and chemin de fer seconds track, gives an added dimension of visual texture with an azurage finish in initial images. Smallest of all is the minutes window, nested directly on top of the seconds display with its own swoopy stylized pointer bezel indicating the current time. 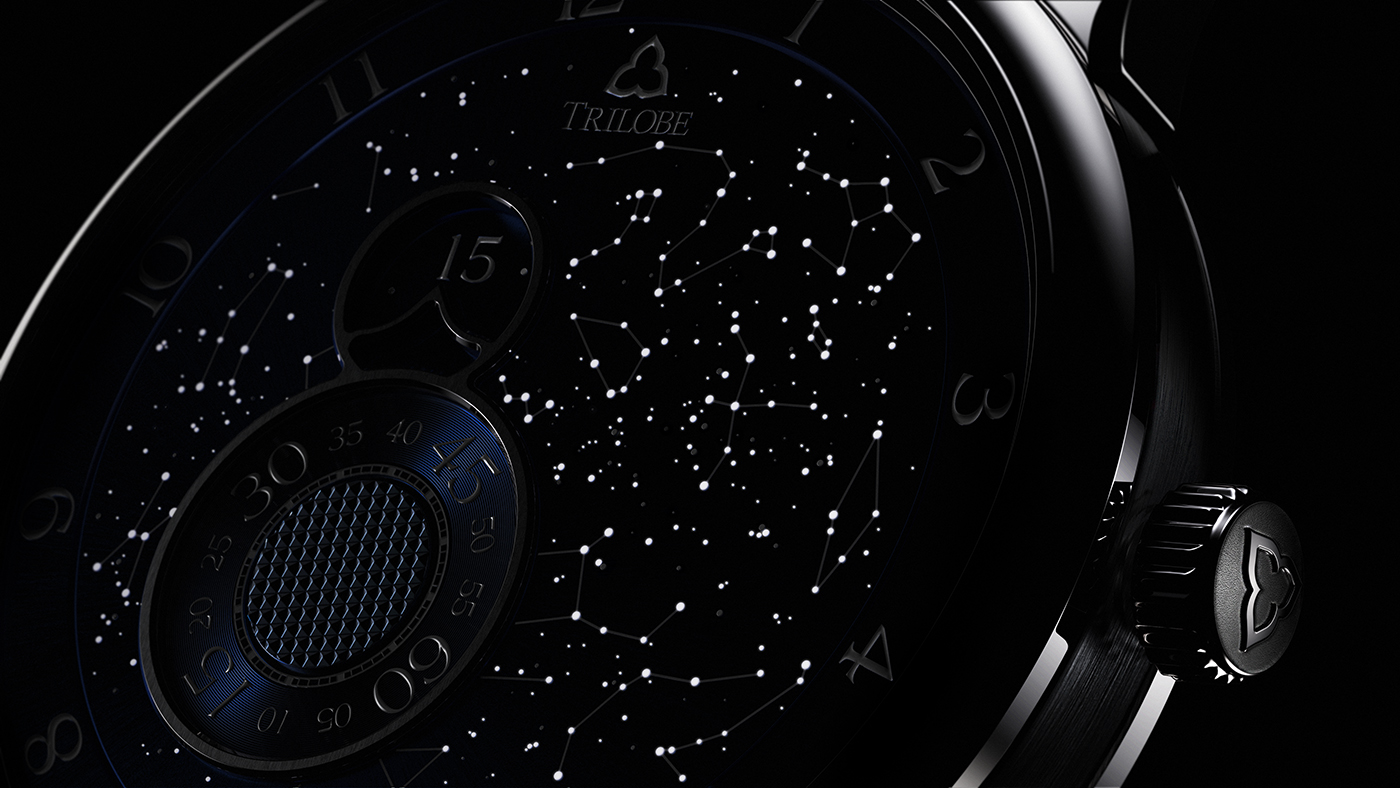 While this nested series of elements already sets the Nuit Fantastique far apart from more familiar wristwatch designs, the fact that each of these display rings rotates counterclockwise gives the line a subtle added layer of visual exoticism. Overall, the dial layout is open and airy with a focus on texturing, subtle color, and a finely balanced sense of visual weight. With so much negative space, the base dial surfaces become exceedingly important to the overall look and feel of the Nuit Fantastique, and Trilobe offers three basic colors to show this layout in different lights. First and perhaps dressiest of all is the grained silver dial option, whereas the grainy black option presents as more modern and casual. The grainy midnight blue dial strikes a nice balance between the two, feeling both elegant and contemporary in images. The fourth dial option, however, is undoubtedly the star of the show. Referred to by the brand as “Secret Blue,” this version reinvents the deep midnight blue tone in a rich sunburst finish. By specifying a date, time, and global location of the buyer’s choice, Trilobe then fills the negative space of the dial with an exact replica of the visible stars in that particular night’s sky, complete with constellations of lumed points. The end result is a truly unique snapshot of a moment in time, and one that solves the standard variant’s potential problem of visual emptiness. 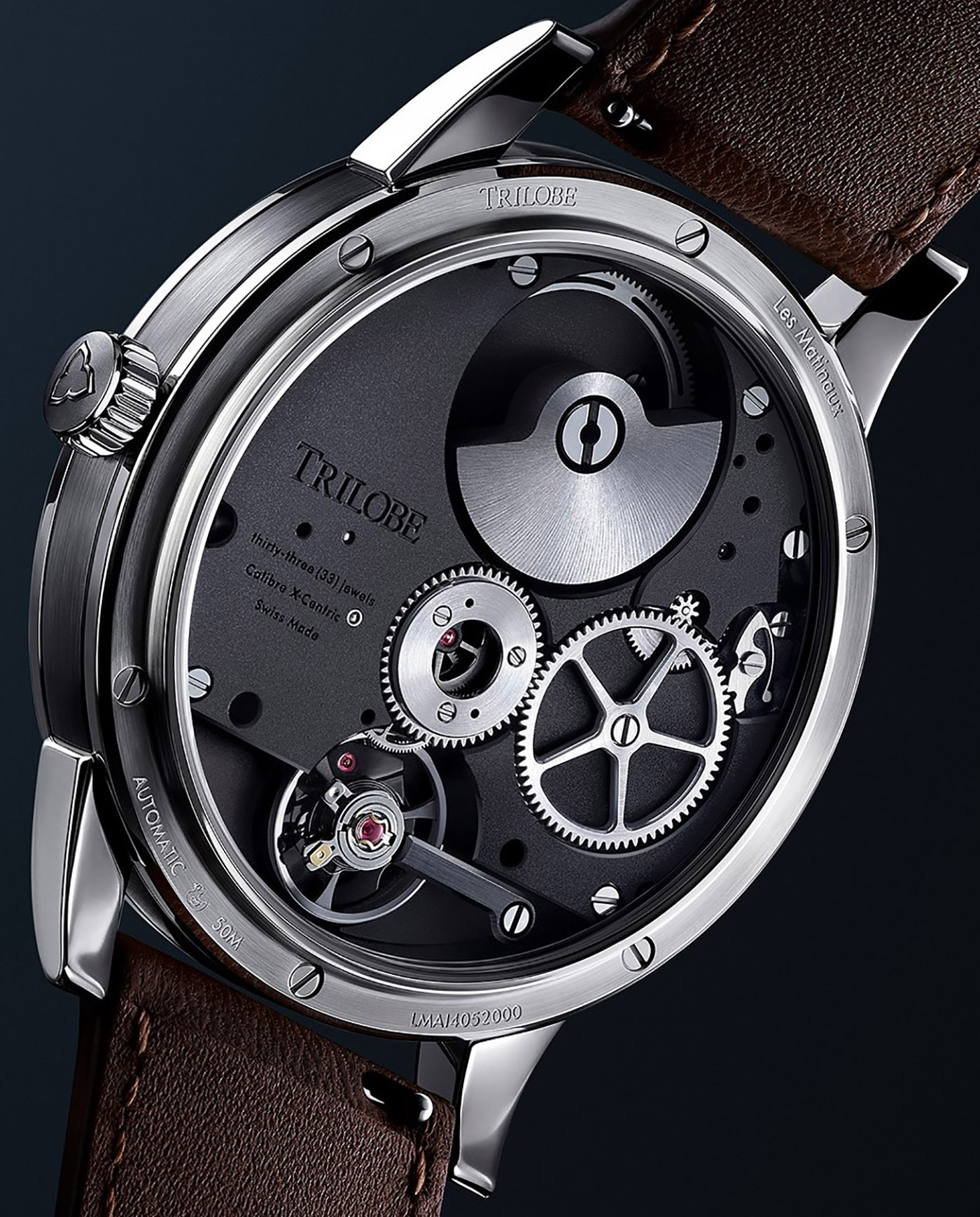 Trilobe powers the Nuit Fantastique series with the unique X-Centric microrotor automatic movement. Developed in partnership with master watchmaker Jean-François Mojon, the X-Centric is minimal and modern in its decoration with blacked out three-quarter bridges, arabesque finishing on the rotor, and a brutally simple rectangular balance cock. The triple rotating ring assembly that allows the hours, minutes, and seconds displays to exist on the same plane is patented by the brand, but outside of this the performance for this integrated movement is relatively standard. Power reserve for the X-Centric stands at 48 hours at a 28,800 bph beat rate. Trilobe fits the silver dial variant of the Nuit Fantastique with a strap in saddle brown calf leather, while all three other models are paired with more classically refined alligator leather straps in black or midnight blue. 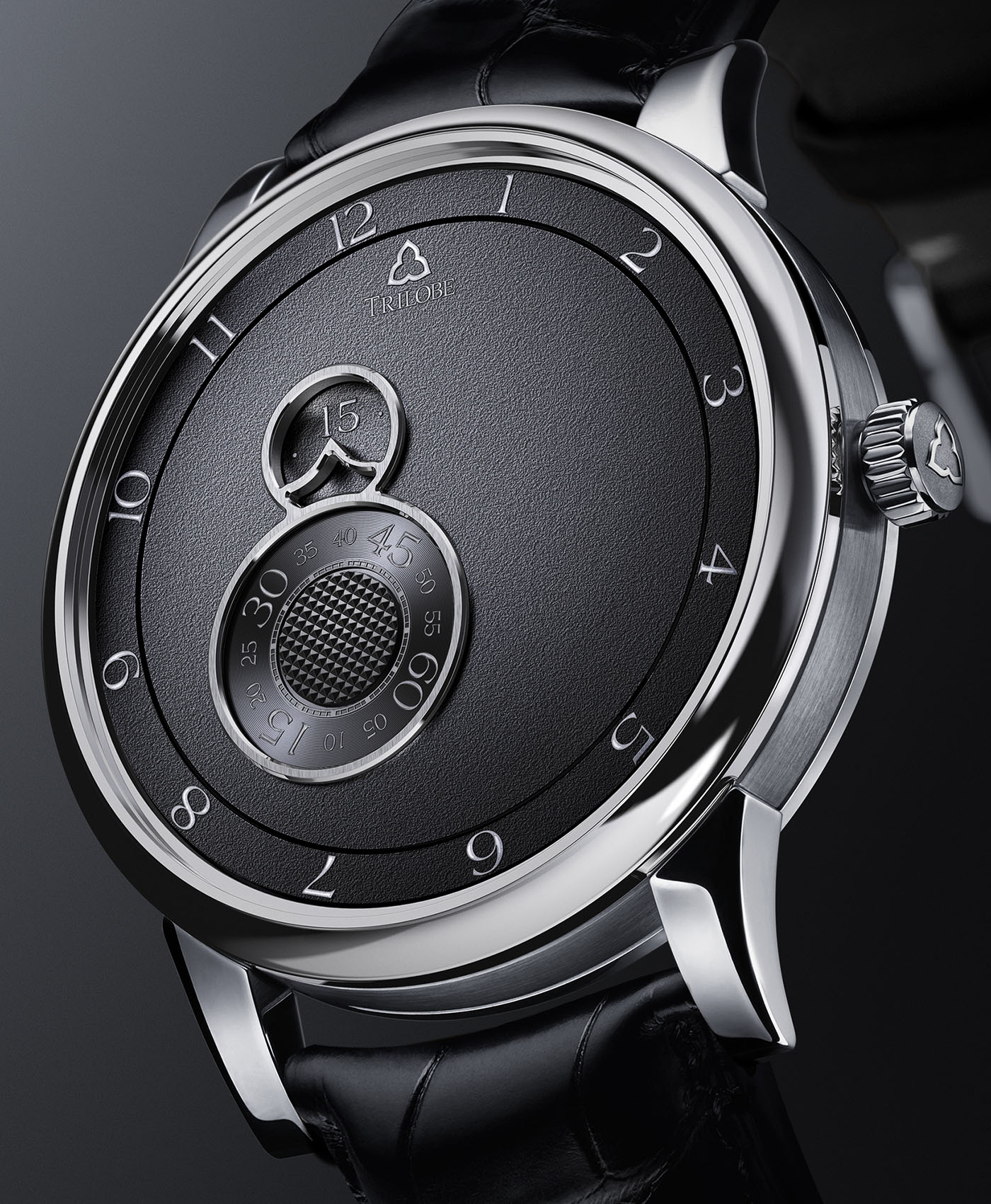 With an elegantly modern reinterpretation on the forms of timekeeping and a handsome execution, the Trilobe Nuit Fantastique series offers a visually unique and surprisingly value-driven alternative to other asymmetrical watch designs. The Trilobe Nuit Fantastique line is available now through authorized dealers, with MSRP for the standard model at €8,300, and for the Secret Blue version at €10,500. For more details, please visit the brand’s website.