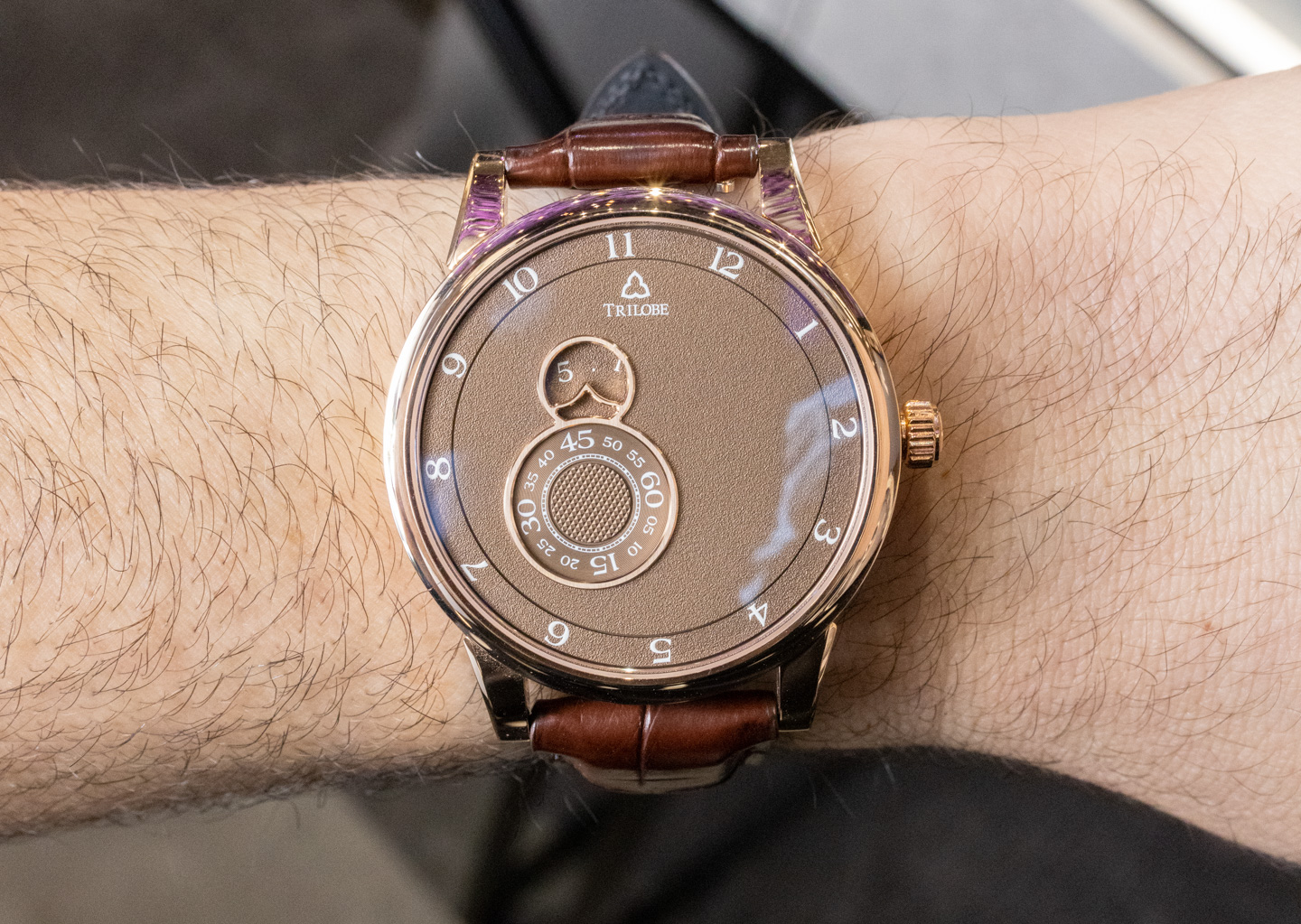 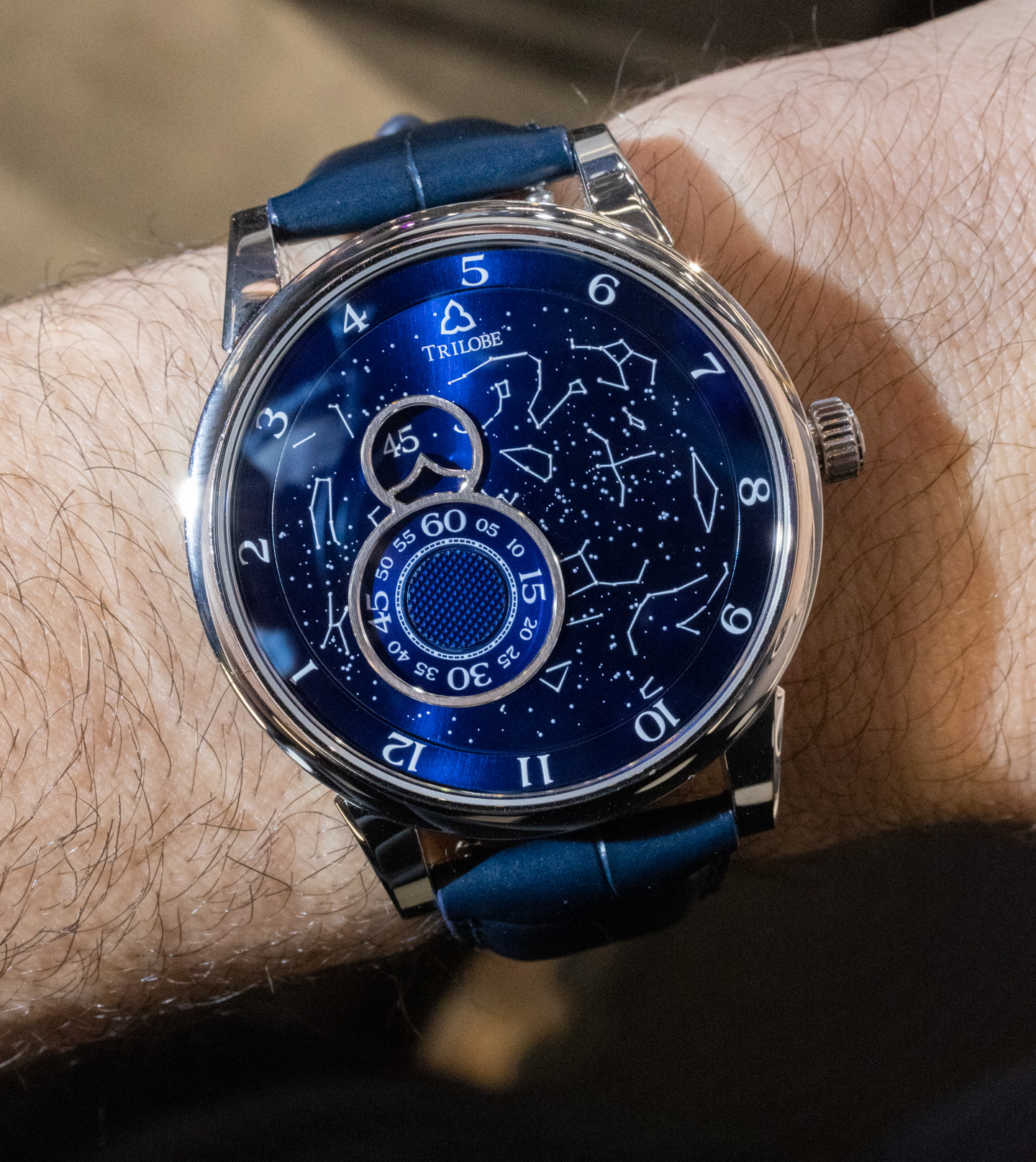 Parisian design ethos and emotion are front-and-center at French watchmaker Trilobe. Its latest collection of watches, known as “Nuit Fantastique” (Fantastic Night), very well promotes the particular form of aesthetics and personality that we like from modern Paris-based luxury design. aBlogtoWatch debuted the Trilobe Nuit Fantastique watch collection here earlier in 2021, and I recently got a chance to see the watches hands-on while meeting with Trilobe at Dubai Watch Week 2021. Let’s see what they are all about.

Interestingly, the Nuit Fantastique watches are priced more or less the same as Trilobe’s debut collection of watches known as Les Matinaux (aBlogtoWatch hands-on here). The Nuit Fantastique and Les Matinaux watches have much in common, including the same cases and movements. What is different are the dials, along with a small tweak on how the time is read. Given that the watches are of “comparable value,” it makes sense that they cost the same. That said, I discussed with Trilobe the potential confusion customers might have when it comes to choosing a model. This choice is usually made by price differentiation or personality differentiation. Given that Trilobe is still new as a brand, the products themselves don’t have distinct personalities in the eyes of most timepiece enthusiasts. Second, because they are priced similarly, consumers can’t make easy decisions such as, “I’ll just go with the more expensive one.” For now, consumers have to choose among various Trilobe products with their hearts — a sentiment that French luxury providers no doubt enjoy. 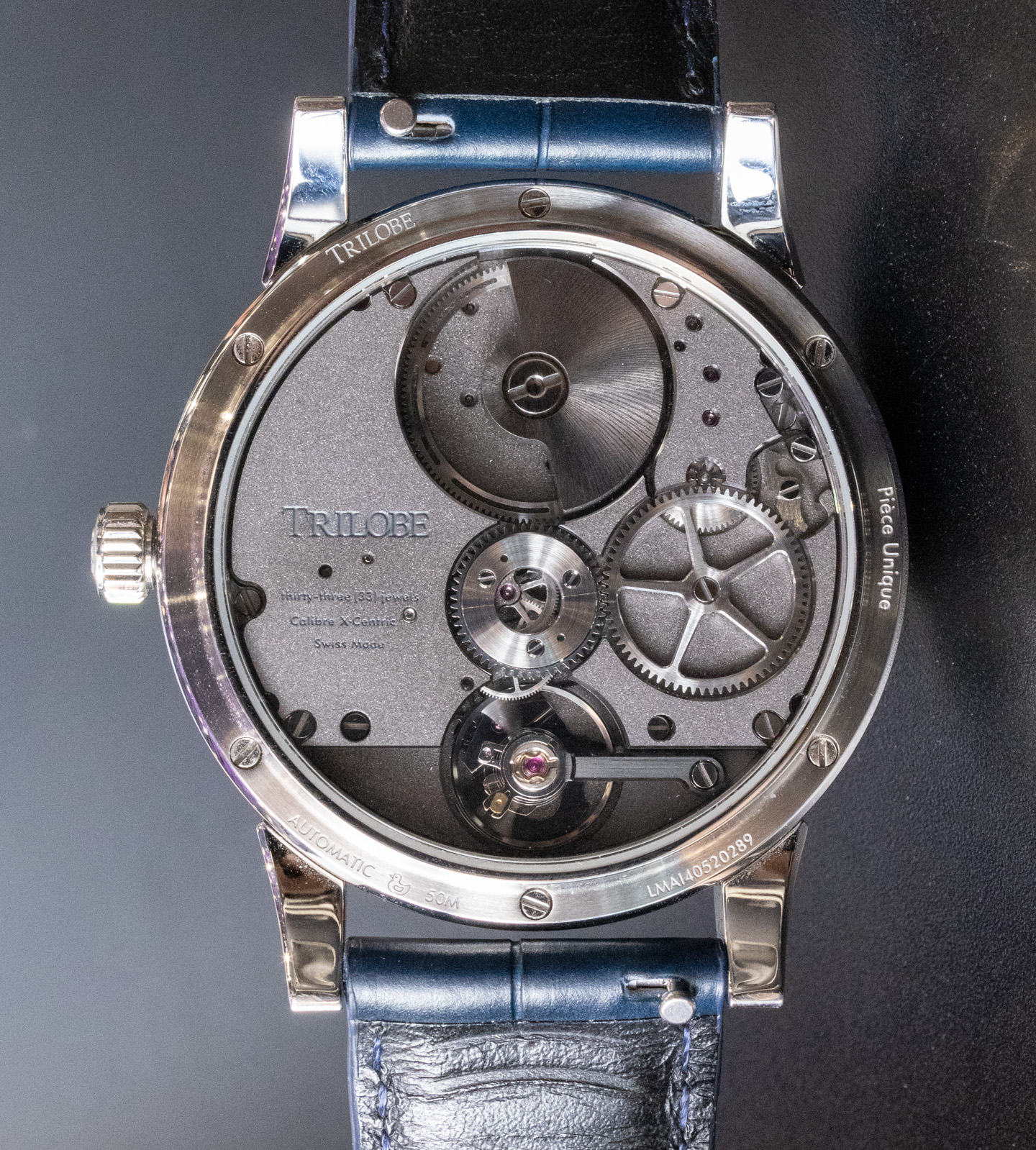 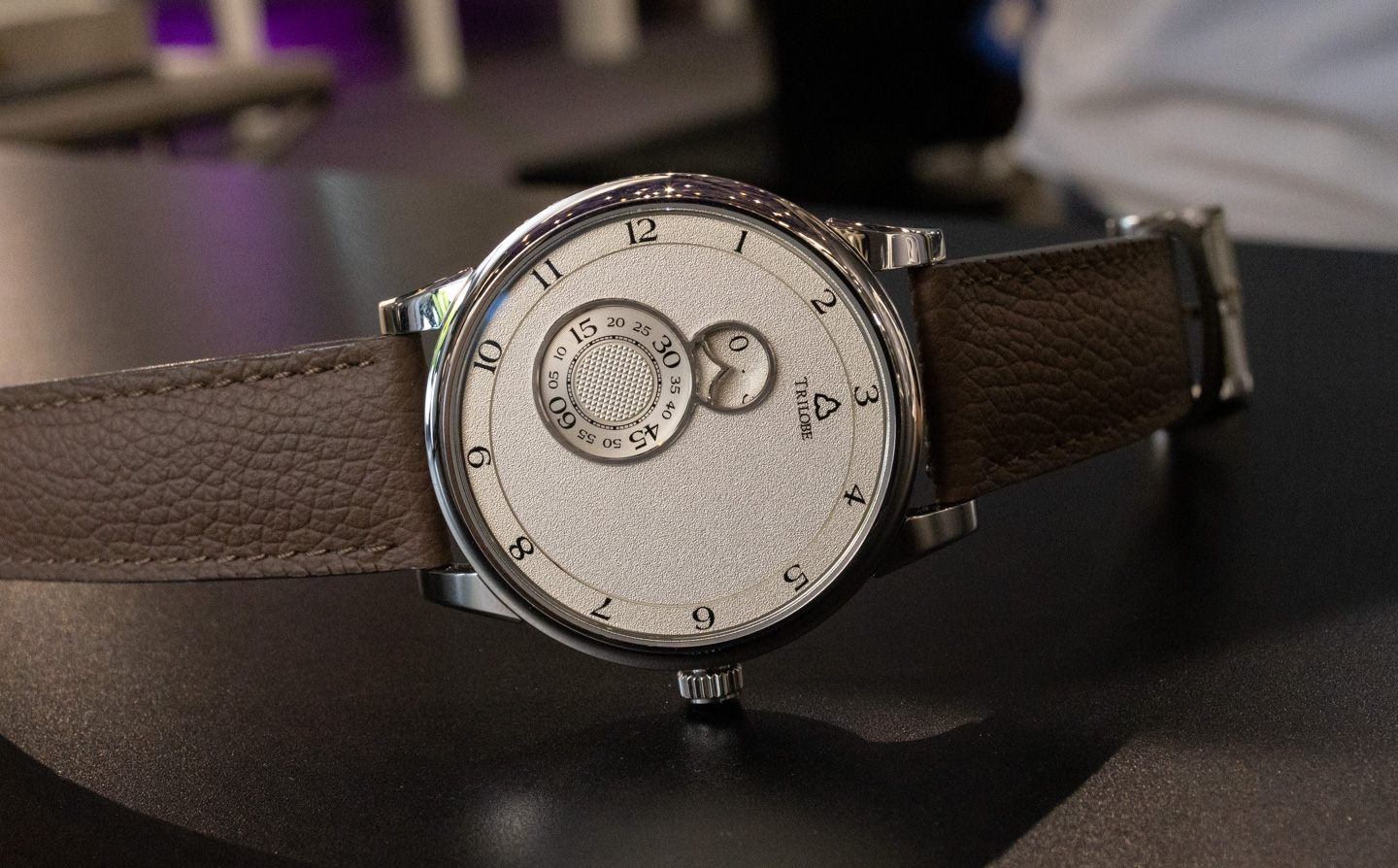 Let’s discuss how time is told via the Nuit Fantastique watch on this quasi-regulator-style display. The dial indicates the hours, minutes, and seconds, each via different means. First, we start with the hours, which are indicated via the Trilobe logo pointer located at 12 o’clock on the main dial. The peripheral disc with the hours on it rotates counter-clockwise, and the current hour is the one that is passing on its way to the next hour.

Minutes are indicated via a small window located at the top of the Star Wars BB-8 droid-shaped indicator displayed placed asymmetrically to the left of the dial. This dial is interesting because the scale has indicators every five minutes, with a point between the numerals that is a sort of 2.5-minute marker (hence, something you don’t see every day). Finally, you have the seconds indicator, which is done via a full spinning disc. Trilobe wanted a bit of pizazz on the dial so the center of the seconds indicator disc is decorated with a “Clos du Paris” style pattern of very small pyramid shapes. 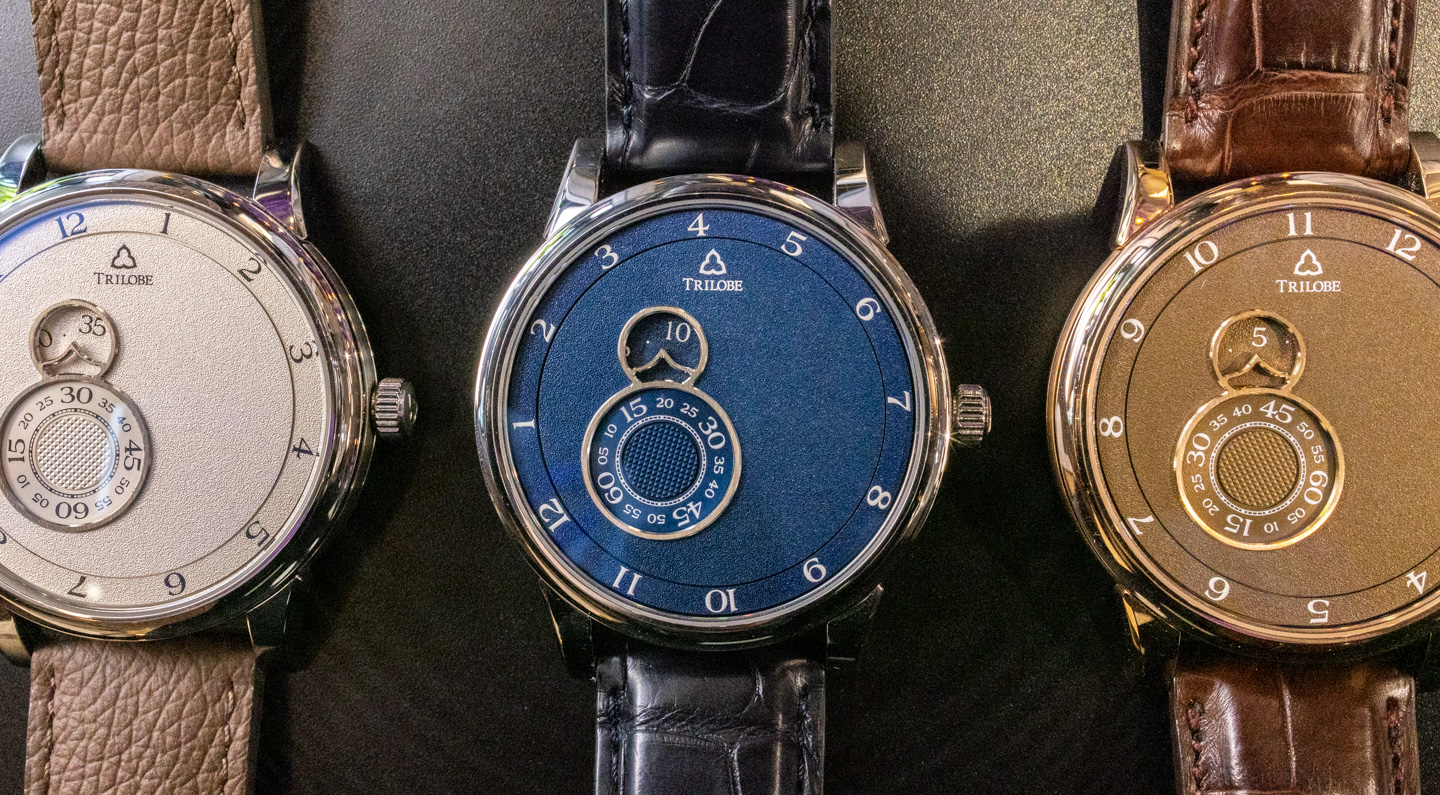 Trilobe put a lot of emphasis into making sure the surface textures and finishing are just right. For example, the “grained” textures of the otherwise solid-color dials are a very high-end touch. I also really like the choice of font used for the numerals on the dial, which evokes a Belle Epoque sensation that is also an important part of design and architectural history in Paris. As an elegant dress or office watch, the Trilobe Nuit Fantastique is not only elegantly spirited but also highly original, and sure to stand out from the crowd.

How legible is the Trilobe Nuit Fantastique as a timepiece? That’s hard to say, as I’ve not worn any of these pieces for a full Wrist Time review. I can say that legibility (for me) is more immediate than the time-telling system on the Trilobe Les Matinaux pieces, even though I like the decorated skeletonization of the brand’s other product collection. I have a soft spot in my heart for watches that tell the time “differently” and find many of them enjoyable to read when compared with traditional “12-hour” dial displays. 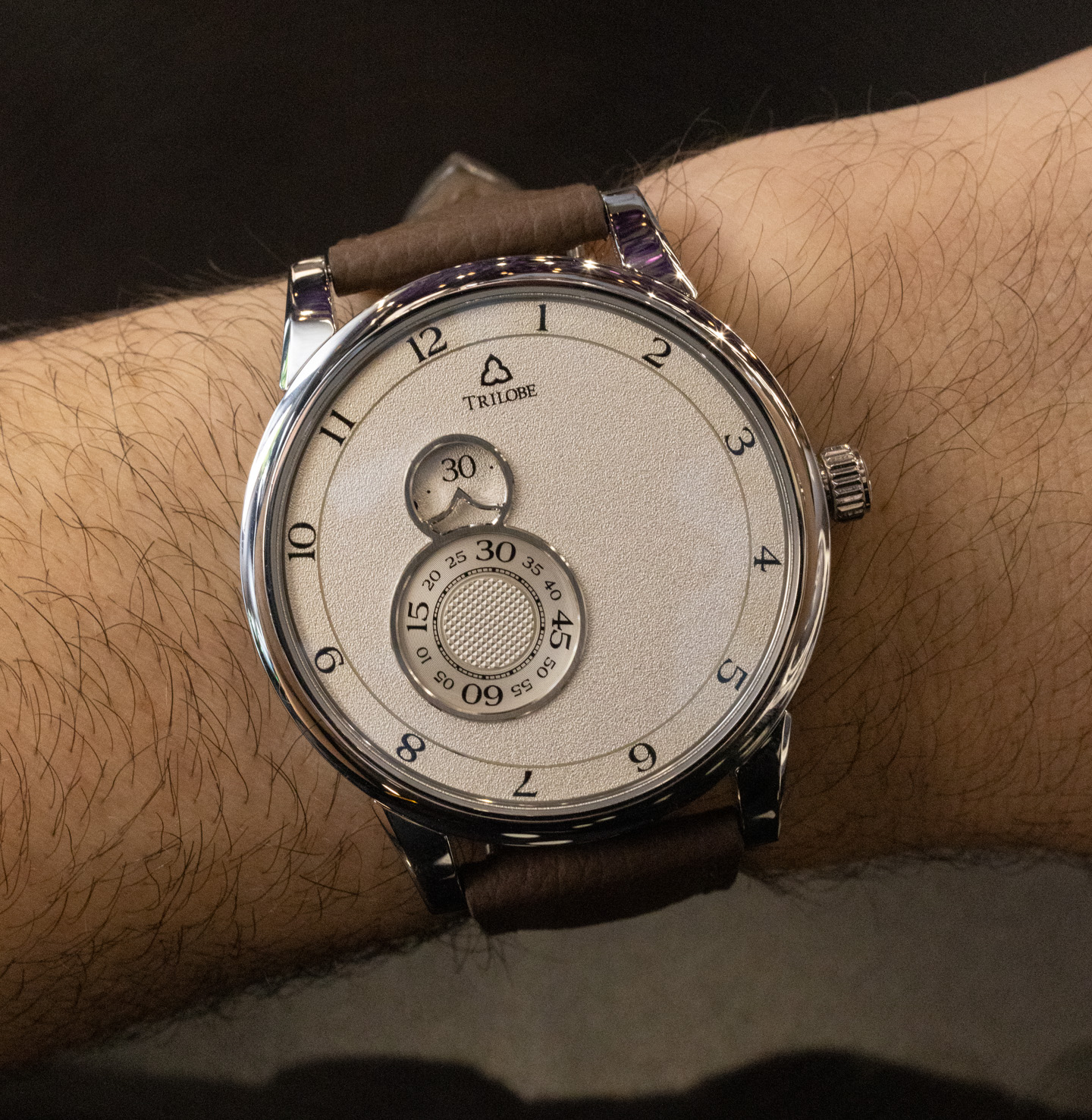 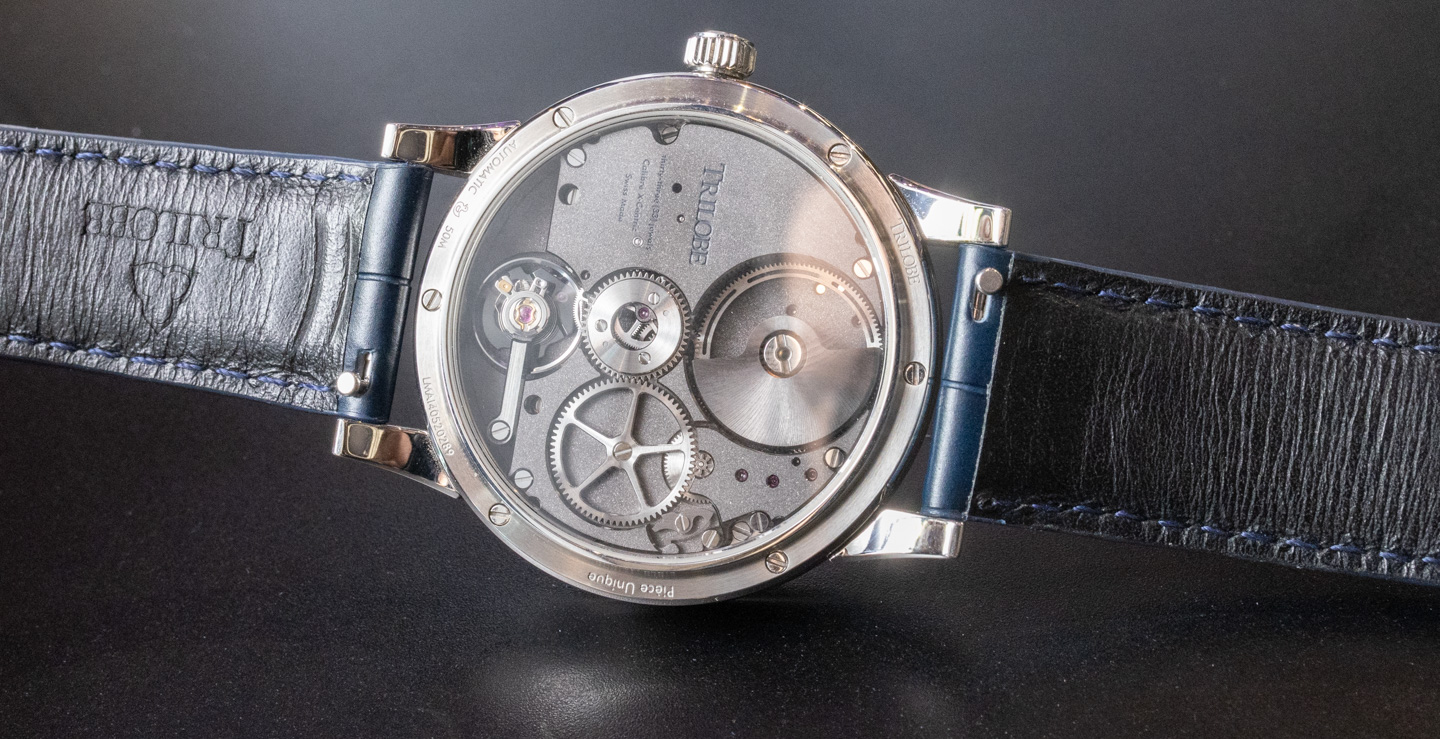 At the heart of both the Trilobe Las Matinaux and Nuit Fantastique watches is a lovely exclusive movement developed by Trilobe known as the “Calibre X-Centric.” As mentioned, the movement isn’t produced by Trilobe but rather designed by the brand in France and produced exclusively for Trilobe in Switzerland. The micro-rotor automatic movement is visible through the rear of the case and combined modern visual appeal with traditional horological systems. The 230-component movement operates at 4Hz with 48 hours of power reserve and is a really nice treat to view on the rear of the case when something this nice or special isn’t what people immediately expect when viewing the simplicity of the dial. 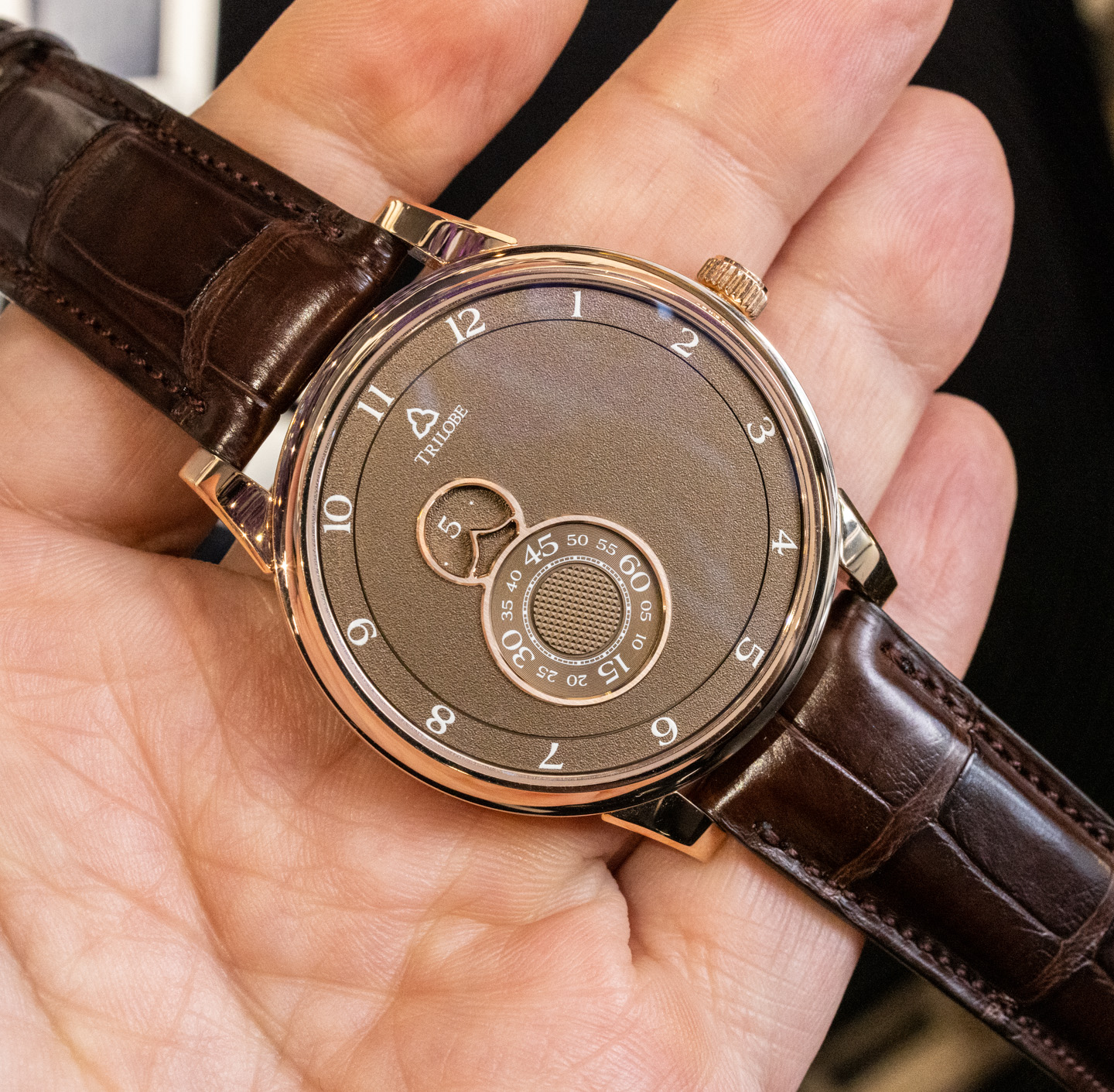 Trilobe produces two versions of the Nuit Fantastique with the larger versions modeled by me in the pictures. One version comes in a 38.5mm-wide steel case, and the other comes in a 40.5mm case; ostensibly, each watch is produced on order as a result. The cases are also water-resistant to 50 meters and given a sapphire crystal over both the front and rear of the case sides. Currently, there are four dial options for the Nuit Fantastique including “Grained Blue, Grained Silver, and Grained Black.” The last dial color is known as “Secret” and is the even “more” made-to-order version of the Trilobe Nuit Fantastique.

In essence, the Secret dial has the consumer selecting a particular date and a particular place on earth. That location and time corresponds to a particular view of the night’s sky. Trilobe then imprints on each “starry sky” dial a precise representation of what the night sky would look like on that date, in that particular place, complete with human-centric indications of constellations. I like this last part because it reminds us that the night sky is both a product of natural phenomena and that it has distinct value to how humanity has both created a concept of tracking time, including the anthropomorphism that led to finding “shapes and things we people recognize” out of star position formations. 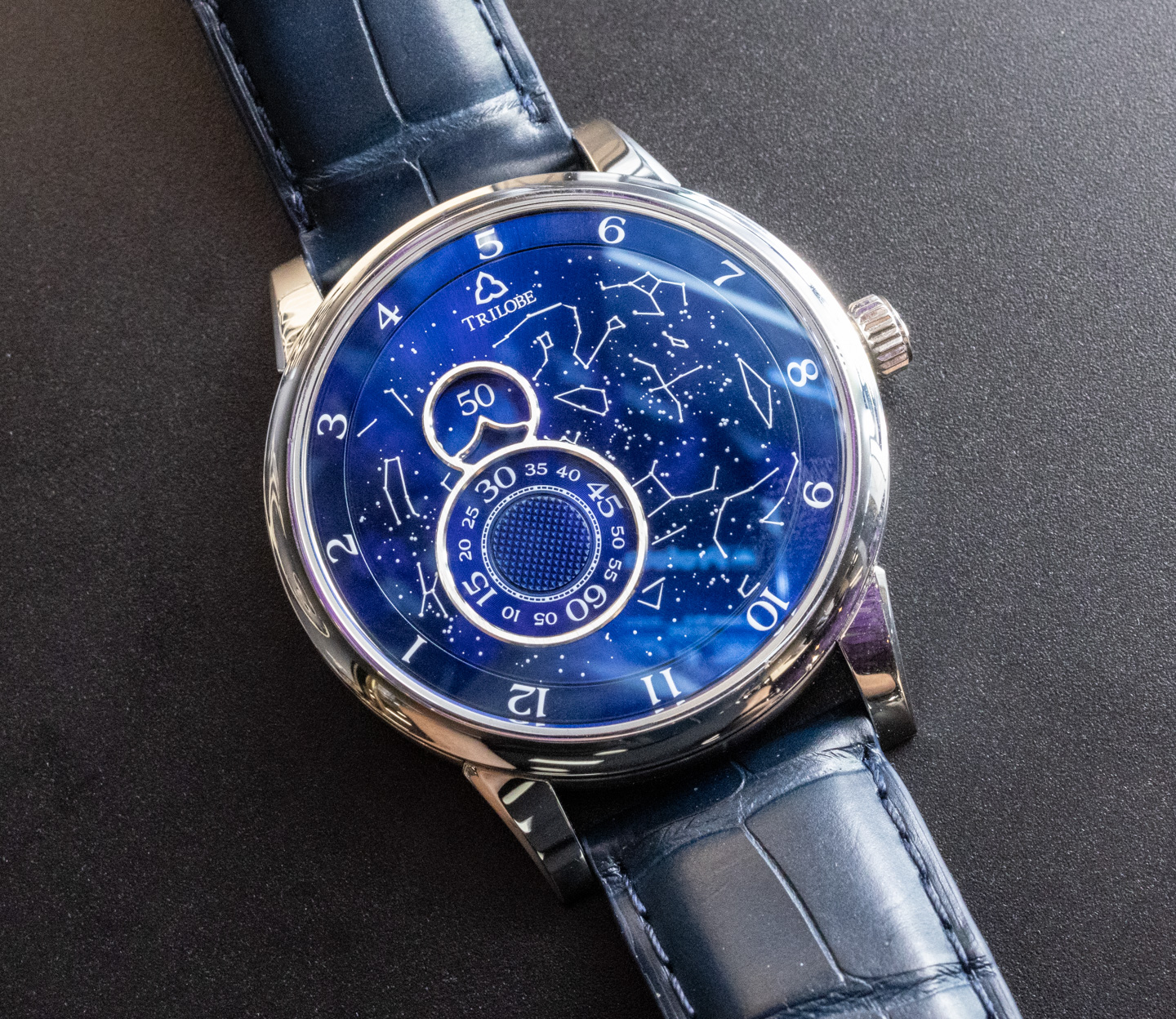 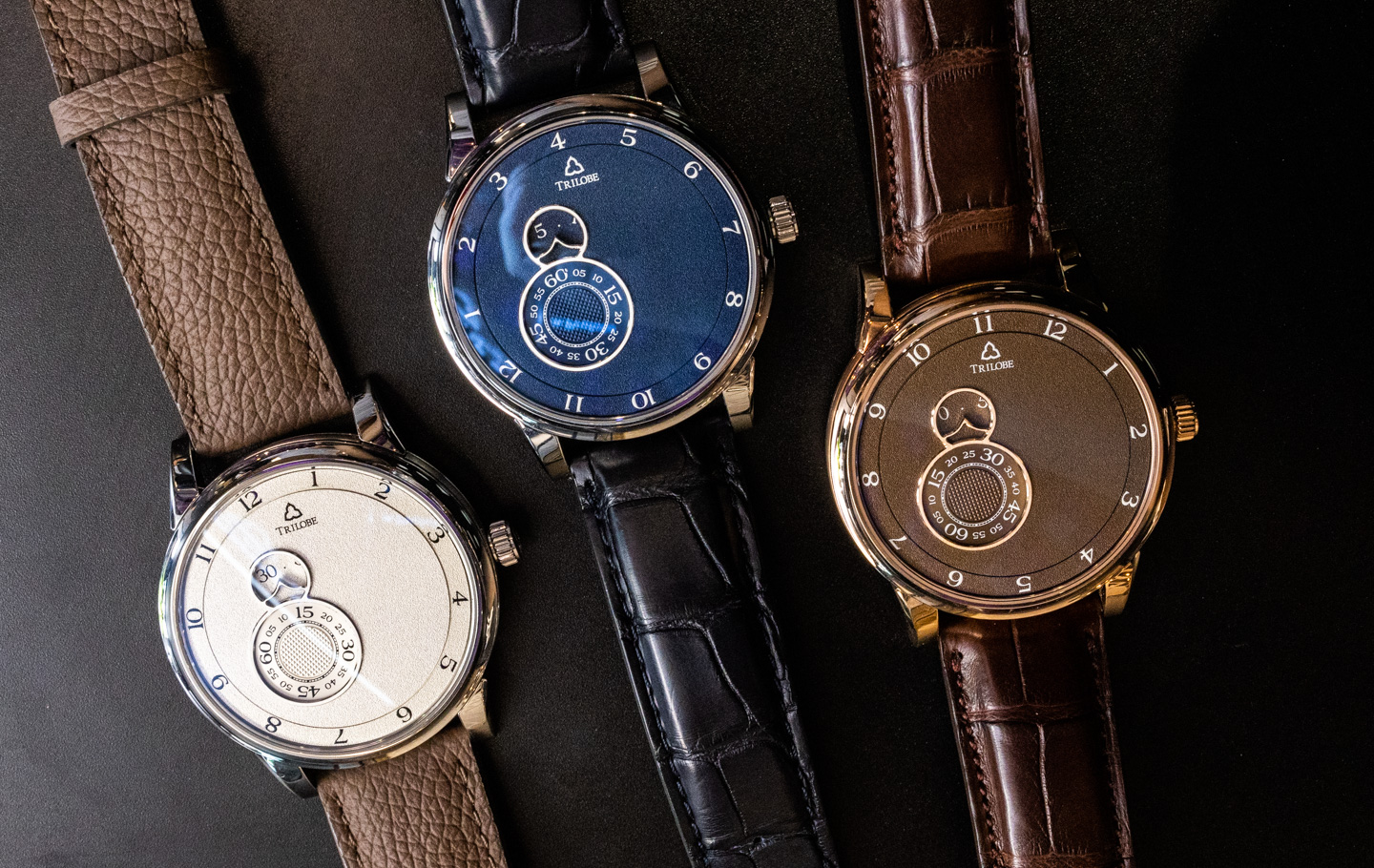 The Trilobe Nuit Fantasique Secret watch requires about four months to create on order, according to Trilobe. I actually like how the brand mentions things like this as an important means of creating fair expectations on behalf of buyers. It might seem like a little thing, but to give consumers an idea of when they might actually receive a bespoke-made product in an Internet-first luxury commercial environment is a wise approach and a testament to the type of customer service that one can expect from a brand.

Thus, choosing things such as the case size, size of the alligator strap (also something you can choose via the Trilobe website), and effective communication to potential buyers show that Trilobe isn’t just another luxury timepiece maker but a fresh face that is also highly keen to improve in areas where previous brand e-commerce websites may have fallen short. I’m certainly eager to experience what Trilobe does next, and I want to see more of these products on wrists soon. Price for the Trilobe Nuit Fantastique is $10,560 USD for the standard models in steel (either case size) and $13,560 USD for the Nuit Fantastique Secret dial. Learn more at the Trilobe website here.